A helpful guide for freezing meat, according to food safety experts 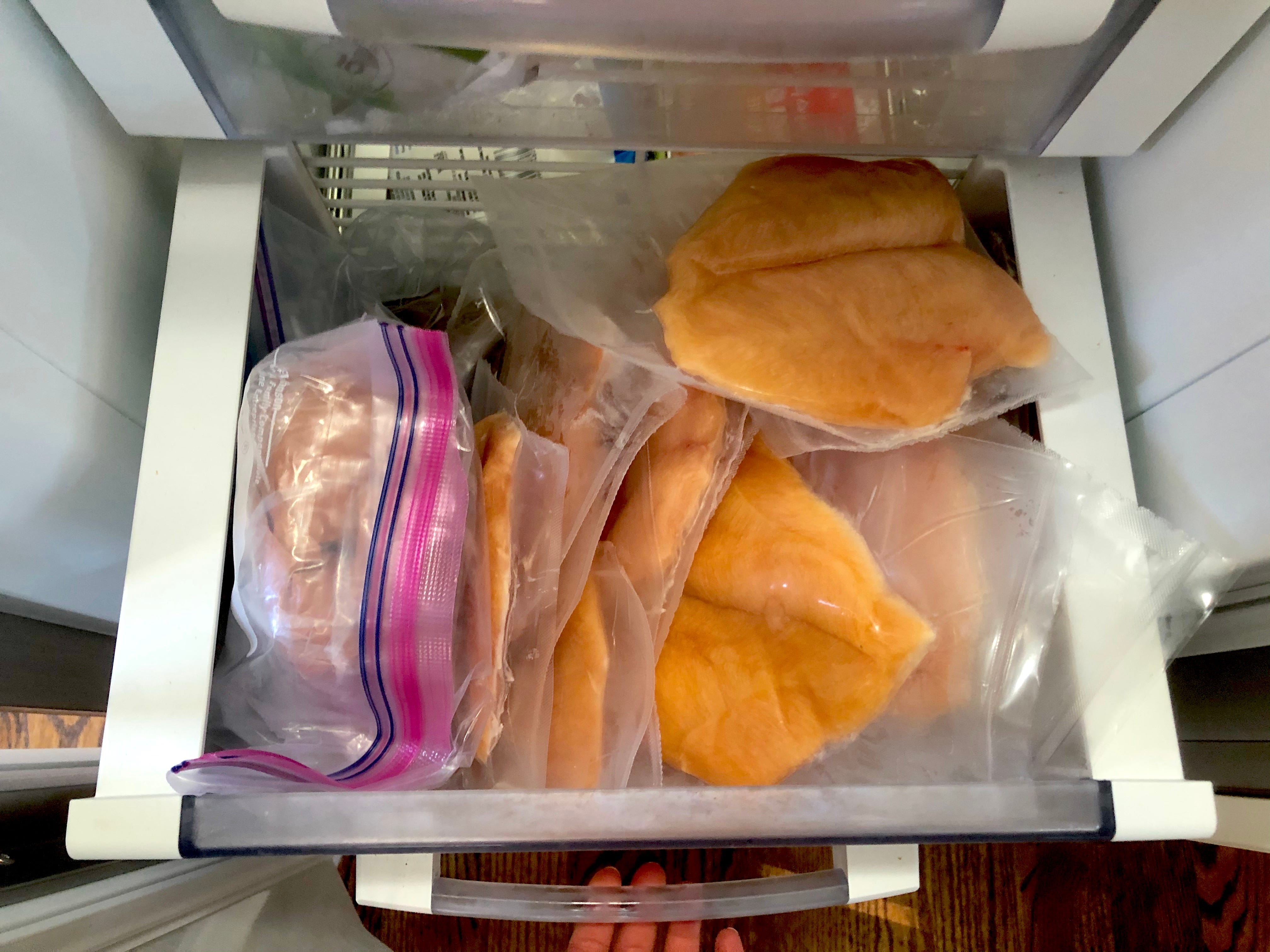 Rachel Askinasi/InsiderThere can be any number of meats in my freezer at a time.

I come from a long line of food-freezers. My parents are constantly portioning out meals, soups, raw meats, and fish, and freezing them for a later date.

If my mum makes a trip to the butcher, she’ll get some extra pieces of chicken breast or links of sausage and freeze them for me. Similarly, when a giant brisket is inevitably made for any holiday, leftovers get packaged and frozen (I currently have around one pound of brisket in my freezer from Hanukkah).

I’ve frozen meats in plastic zipper-top bags, plastic containers, glass jars, vacuum-sealed bags, and pretty much anything else you can think of – shamefully including butcher paper. While yes, I have survived thus far, I’m definitely pushing the boundaries when it comes to frozen meat.

The container you use to store meat in the freezer makes all the difference. 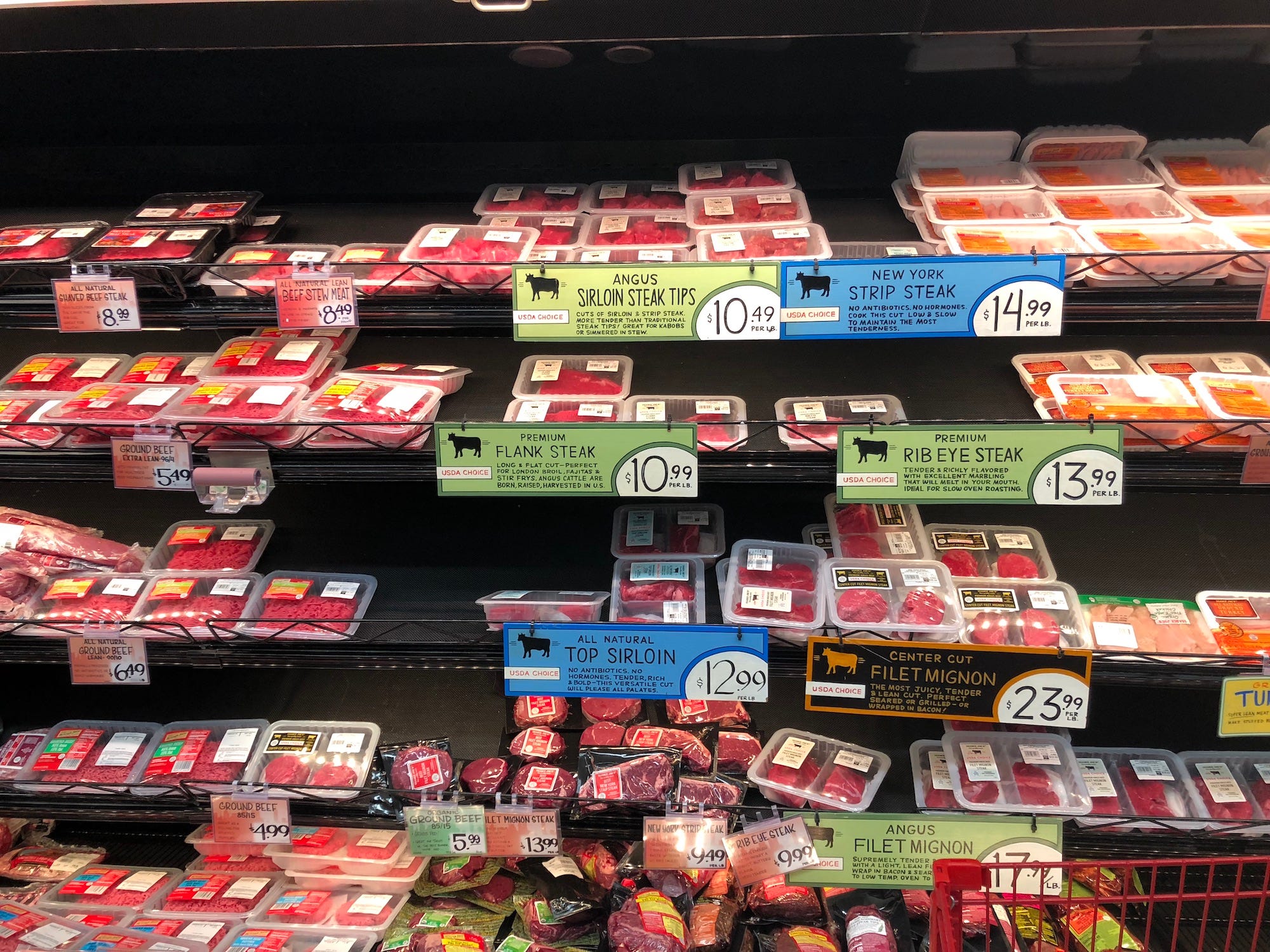 Tamika Sims, PhD, said that from a food safety standpoint, the trays or shelf packages you’re likely buying meat in aren’t meant for long-term use. She said the packages probably aren’t secure enough to keep air out and avoid freezer burn over time.

From a taste standpoint, associate professor of food science at North Carolina State University, Dana Hanson’s rule of “oxygen is the enemy” recommends minimising air exposure as much as possible. His recommendation is to leave the meat inside its original shelf package, and then stick that entire package inside a freezer-safe bag.

Hanson said that in terms of keeping the flavour at its peak, there’s a very short window of it staying good if the meat is wrapped in paper and a longer – but not long-term – window if it’s covered in plastic wrap. For the ultimate longevity, he recommends using a vacuum seal.

Regardless of what material your container is, you should be mindful of its integrity. Whether that’s a single-use plastic zipper-top bag or a reusable silicone pouch, if it’s not identified as freezer safe, don’t freeze it, Sims said. Similarly, if it’s not dishwasher safe, don’t try to put it in the dishwasher and then use it again for freezing.

Consider that different kinds of meat have a different life span in the freezer. 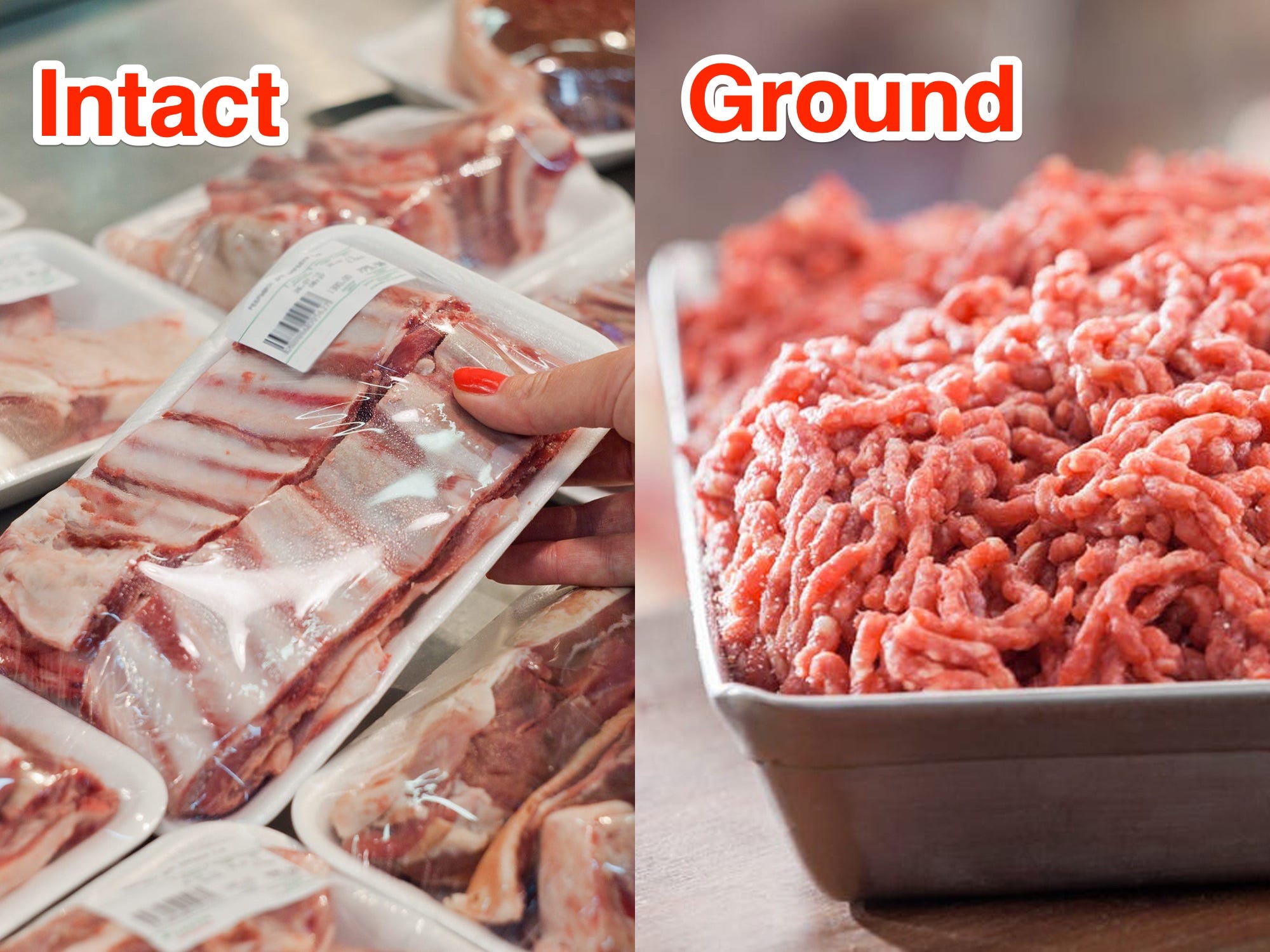 While Sims said it’s important to remember that there are several factors – like freezer temperature and container – that can have an impact when it comes to longevity, she did provide a guideline on how long certain raw meats can safely last in the freezer.

She recommends poultry that’s been broken up into parts be removed from the freezer after around nine months, while a whole chicken can be safely frozen for up to one year.

For a multi-meat mixture, whether it’s made of ground or intact pieces, Sims said you should base the timeline on the meat with the shortest life span.

If meat has been in the freezer for a month or two longer than recommended, it’s not that it immediately goes bad, Sims said. What does happen is that there’s a lower chance of the bag or container continuing to keep the meat fresh. “There are some bacteria that don’t die just because you’ve frozen the meat,” she said.

You also run the risk of it not tasting as good. Hanson said that in terms of quality, both intact pieces of meat and ground meat behave the same in the freezer.

Be mindful of your freezer temperature. 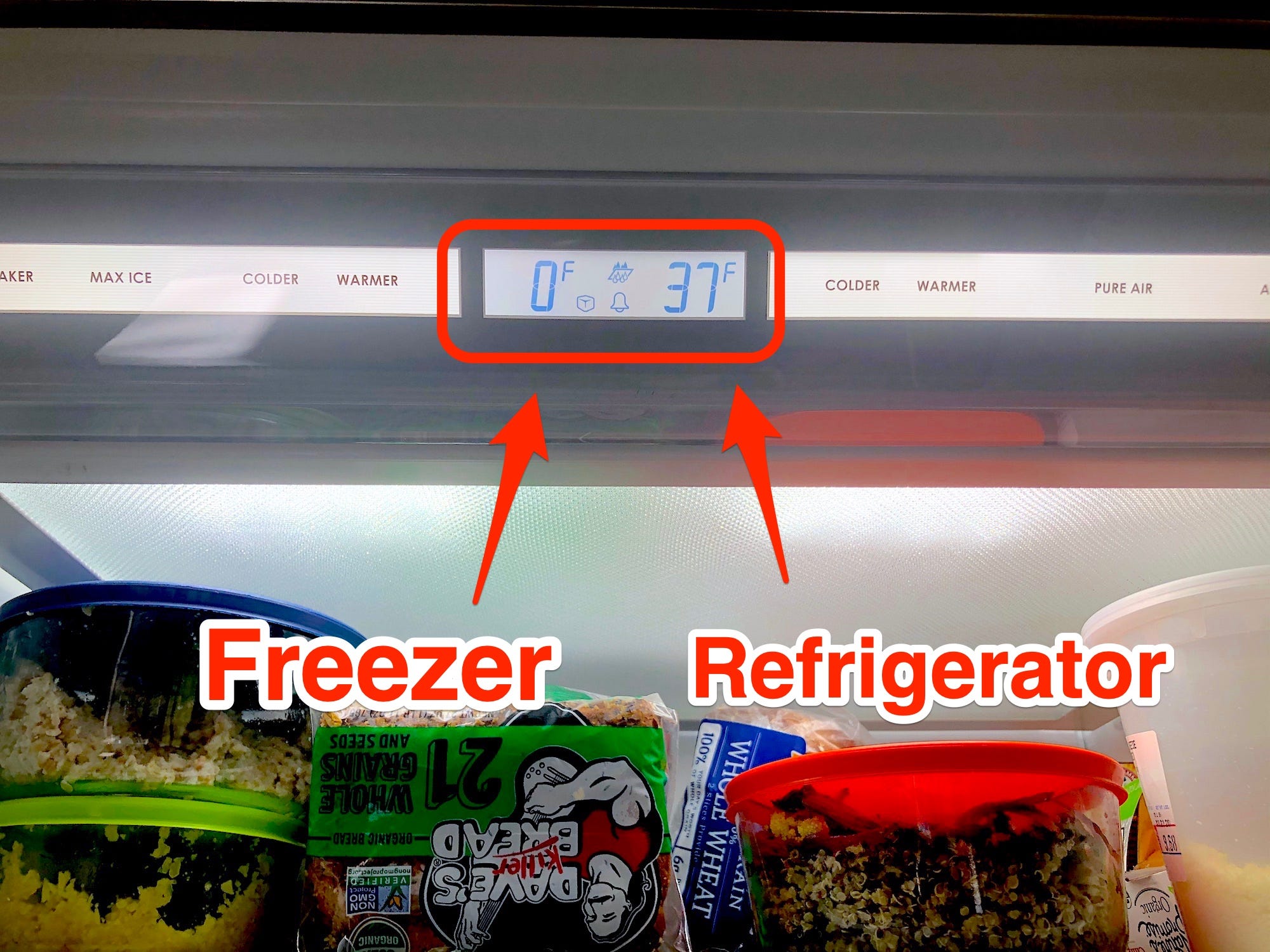 Rachel Askinasi/InsiderYour appliance will typically have a built-in thermometer, but you can purchase one if not.

Sometimes, a refrigerator-freezer combination appliance might not keep its freezer at zero degrees – if you’re freezing something short-term, that’s fine. But, Sims said, if you’re freezing for the year mark, you might want to think about getting a free-standing freezer.

Hanson, though, recommends a freezer temperature no higher than zero degrees Fahrenheit to preserve the flavour quality of the meat.

Safely and effectively thaw frozen meats in the refrigerator. 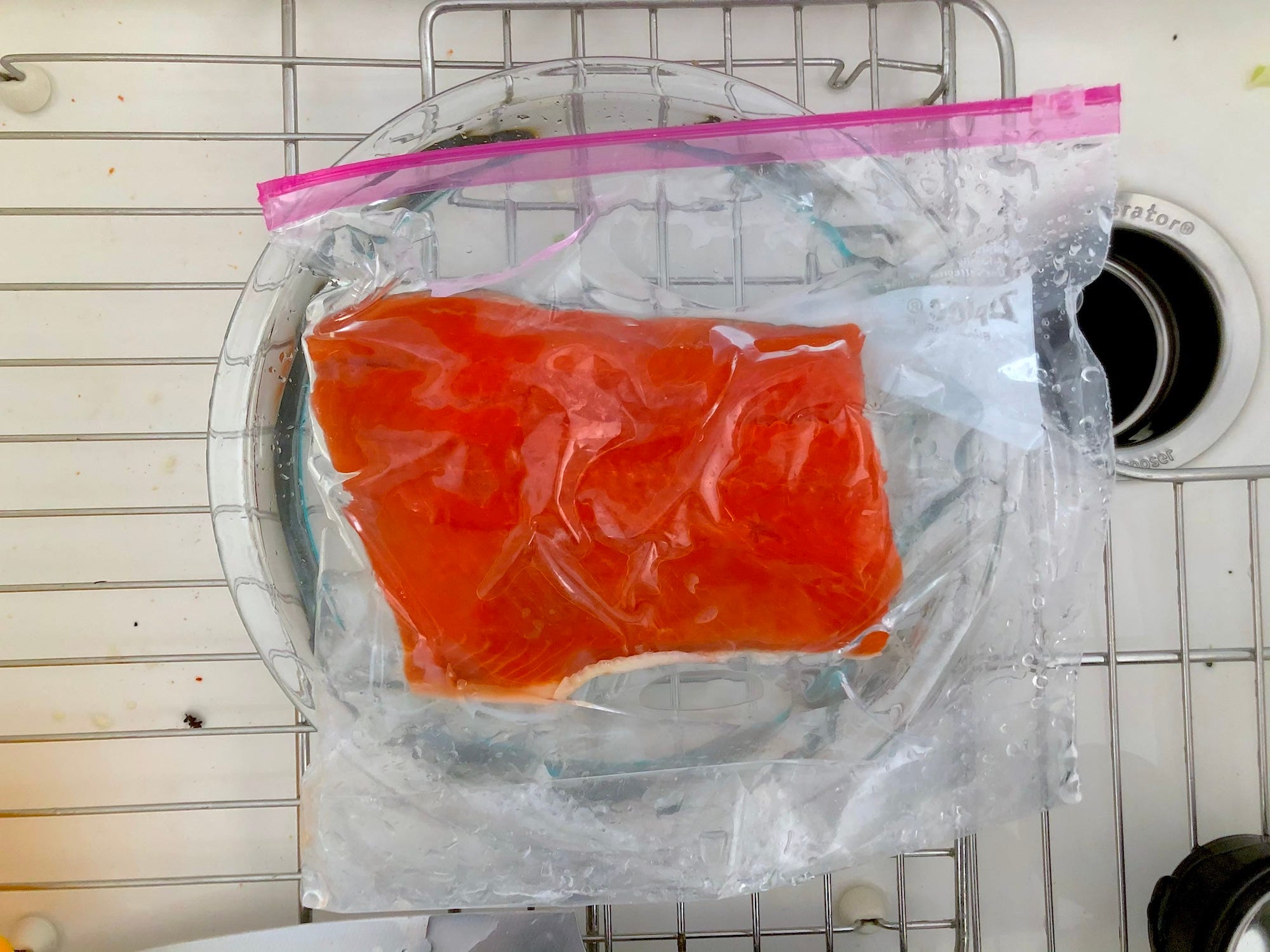 Rachel Askinasi/InsiderSometimes I leave frozen meat or fish in water in the sink.

Most people – myself included – aren’t thinking far enough in advance to thaw meat for days in the refrigerator before cooking. There are many times when I come home from work, pull out a piece of chicken from my freezer, and run it under cool water until it thaws. If I happen to remember to take it out in the morning before work, I typically leave it to thaw in my sink.

Sims said that the FDA advises against leaving meat to thaw at room temperature because it leads to uneven temperatures within the meat, which makes it more susceptible to bacterial growth. “You’re putting yourself in a risk zone,” Sims said.

“The best thing to do is put it in a dish and put it in the refrigerator,” she continued. “Of course, that takes longer, but it is safer.”

“Another thing you can do is keep it in the air-tight packaging and put that in cold water,” Sims said. “That’s a little bit faster than the fridge.”

She said the FDA is also on board with using the defrost button on a microwave.

“I’ve definitely used that for ground turkey and I love it,” she said. “Sometimes you get a little bit of the ice chunks, but that cooks right away.” She recommends saving that method for ground meats and poultry, though, “That just seems like the wrong way to treat a steak.”

For a steak, she said she’d rather use the cold-water method if she didn’t have time for the fridge.

The biggest no-no when it comes to thawing according to Sims is washing meat.

“Don’t do it! Don’t wash the meat!” she said. Splashing water on meat results in splash bacteria around your sink and your countertops. Plus, she said, it’s totally unnecessary and it’s not helping you in any way.

Yes, you can refreeze your thawed meat. ShutterstockIt’s not ideal for flavour, but it’s safe.

I’ve long believed the myth perpetuated by my mother that once you defrost something – especially meat – you should not try and freeze it again. I’ve panic-cooked many packages of ground meat and pieces of chicken breast because of it.

Sims said it’s certainly OK and safe to refreeze thawed meat as long as you thaw it in the refrigerator. But, she continued, you should know that you’ll lose some of the quality each time you do it.

“You will have lost some of the juices that were in the meat, so there could be some loss in flavour quality,” she said, “but it’s safe to refreeze.”

Be cognisant of the best-by date. 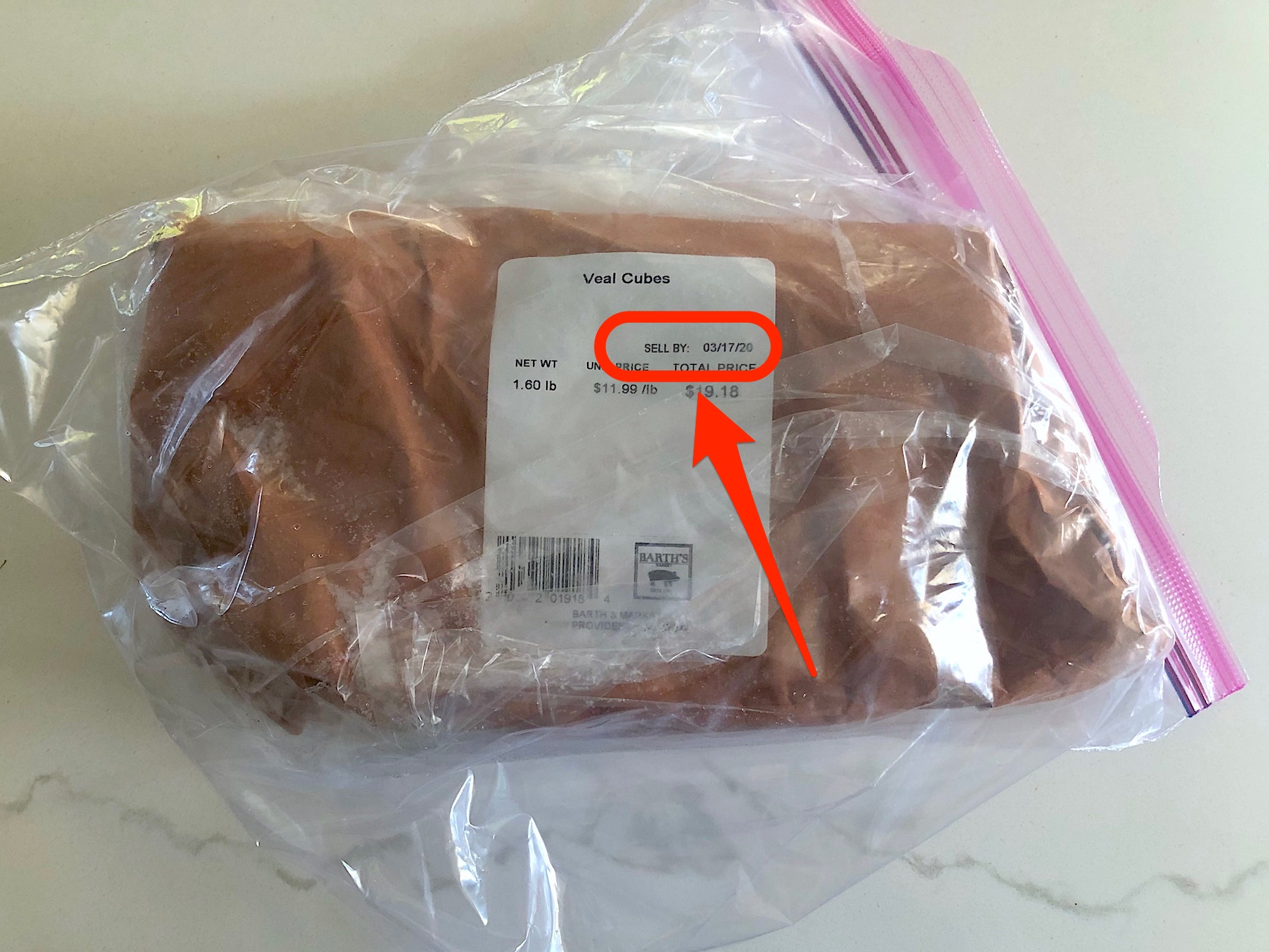 Rachel Askinasi/InsiderSometimes the date is labelled as ‘sell by.’

Packages have “best if used by” dates which are good to pay attention to. That date is telling you when the food is at its height for taste, reliability in texture, and safety, Sims said. If you go past that date, it doesn’t necessarily mean the food is unsafe; it’s just telling you you might be at risk for the product not tasting its best.

In terms of freezing, Sims said you’ll want to use that date as a cutoff for when you put a package in the freezer.

If you go beyond that date, Sims says to use your senses to tell you if it’s still good – take a look at the colour and odor.

“What the freezing does is that it slows down the cellular processes that are happening in the meat to almost a halt,” she said. Freezing doesn’t reverse anything in terms of rotting, though, it just pauses the process temporarily. So if meat is showing signs of going bad, you won’t be able to save it by putting it in the freezer.

Use the “best by” date as a guide for when you should go ahead and cook or freeze the meat. Ultimately, Sims advises that if it smells or looks funky, “don’t risk it, just throw it away.”