Smartwatches may not be a necessity, but they can be great for keeping you active â€” especially as we’ve been spending more time at home â€” and making sure you don’t miss anything when you’re away from your phone.

Smartwatches have vastly improved in recent years as device makers have launched more comprehensive health features and introduced designs that are thinner, lighter, and more attractive.

There’s a smartwatch for everyone on this list, whether you’re loyal to iPhone or Android, want a watch primarily for fitness tracking, or are looking for something that looks more elegant than your average smartwatch.

I’ve been reviewing tech products for nearly a decade, and that includes testing smartwatches over the course of the past seven years. That means I’ve tested and researched many wearables from companies like Apple, Fitbit, Samsung and others over the years and have a strong sense of what makes a good smartwatch for the price.

Here are the best smartwatches you can buy:

Updated in December 2020 by Lisa Eadicicco: Updated links for accuracy. Added Apple Watch Series 6 as our top pick. Updated the Samsung Galaxy Watch Active 2 section with details on newer features. Updated our favourite feminine smartwatch to the Fossil Julianna HR. Updated the section on other watches we considered to include newer models from Fitbit and Garmin. 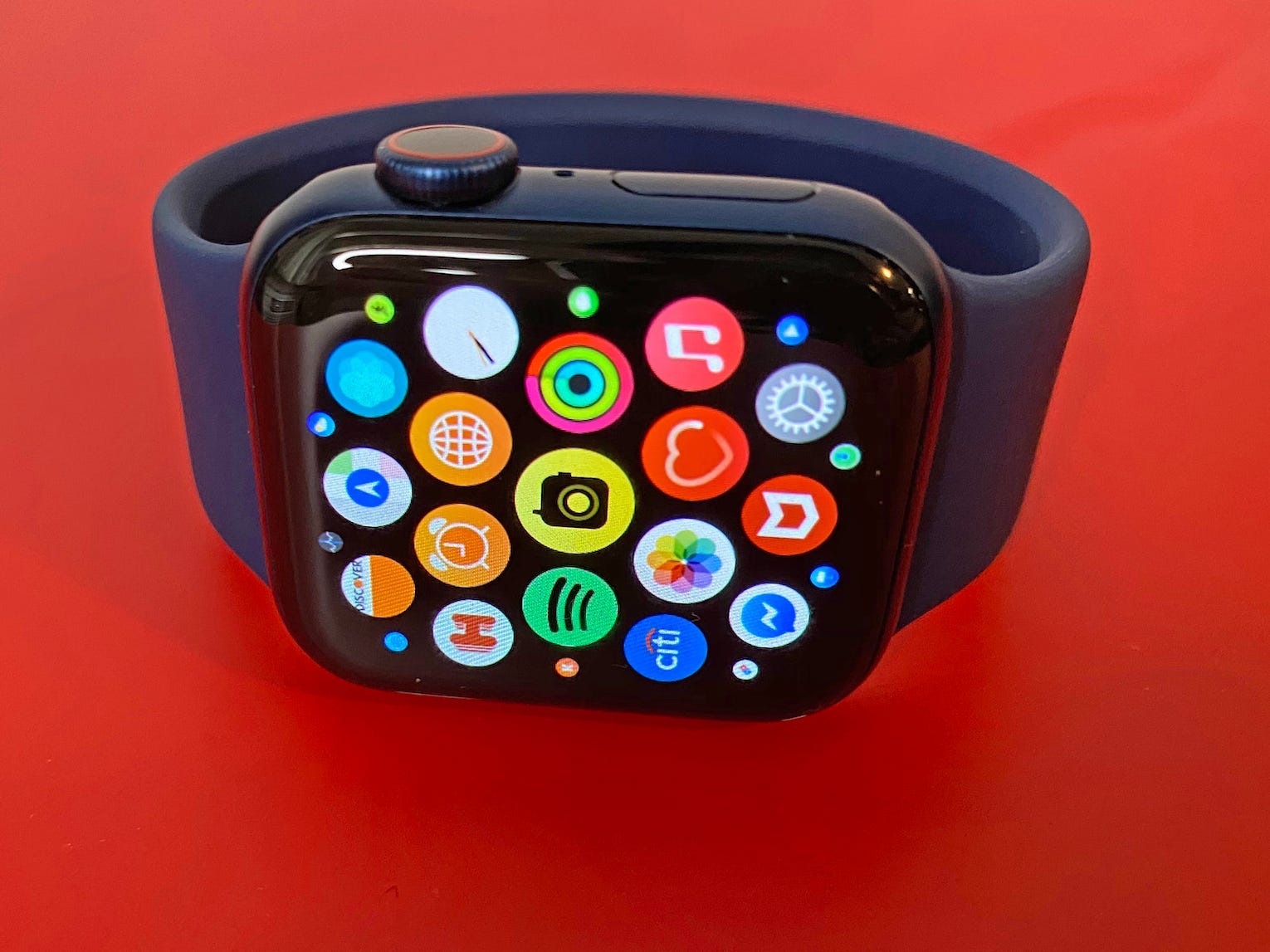 The Apple Watch has long been our favourite smartwatch for its ease of use, comprehensive health tracking, and polished design, and the Series 6 is the best iteration yet.

The $US400 Apple Watch Series 6 is Apple’s most expensive smartwatch, and for good reason. With an always-on display that’s brighter than the Series 5’s, fast charging, new colour options, and blood oxygen monitoring, it’s the best Apple Watch you can buy.

Apple also sells the less expensive Apple Watch SE for $US280, another great choice if you want an Apple Watch that still feels new and fast at a more reasonable price. But you’ll be missing out on advanced health features like blood oxygen level monitoring and the ability to take an ECG from your wrist.

Those features may not matter for everyone; if you’re the type of person that just wants to stay active and challenge yourself with fitness goals, the SE will do just fine. It’s these features combined with the Series 6’s always-on display and faster charging that make it our top choice in the lineup.

More broadly, the Apple Watch stands out from other smartwatches for its modern design that easily fits with any style, broad customisation options, smooth performance and wide variety of apps, and polished software. Our writers and editors have tested dozens of WearOS and Fitbit watches over the years, and the Apple Watch has consistently been the best when it comes to the overall experience.

The Apple Watch checks all the boxes when it comes to all the features you’d want from a smartwatch. In addition to more targeted health features like ECG and blood oxygen level measurements, the Apple Watch can track dozens of workouts – including wheelchair-based exercises – can measure your heart rate, monitor calorie burn, remind you to stand each hour and more. These features aren’t unique to the Apple Watch, but Apple’s smartwatch generally combines the experience of both a fitness tracker and a general purpose smartwatch better than most.

That doesn’t mean it’s perfect, though. The Apple Watch’s biggest drawbacks compared to rivals from Fitbit and other companies are its high price tag, shorter battery life, and lacklustre sleep tracking. The Apple Watch usually needs to be recharged every night, unlike Fitbit watches which can last for days. And the data it gathers about your sleep is much less detailed than what you’d get on other devices.

The best smartwatch for Android users is a fantastic fitness-focused smartwatch for Samsung fans.

Cons: Requires a bunch of extra Samsung apps to work if you don’t own a Samsung smartphone

Samsung’s Galaxy smartwatch lineup has been getting better every year as more apps and features are added. While it has the word “Active” in its name, the Galaxy Watch Active2 is perfectly suitable for fitness or general use

Samsung also added a feature to the Galaxy Watch Active2 that helps it better compete with Apple: ECG readings. The feature launched in September after gaining approval from the United States Food and Drug Administration. However, it only works if the watch is connected to a compatible Samsung Galaxy smartphone.

You can get it in two sizes: 40mm and 44mm – just like the Apple Watch. It has a slim, sleek round watch case so it looks more like a normal watch than a piece of tech. The bezel is also touch-sensitive, which makes the software easier to navigate since you don’t always have to obscure the tiny screen with your finger.

You can get it in aluminium (WiFi/Bluetooth) and stainless steel (LTE) and choose between silver, gold, and black finishes. The watch has a simple silicone band, but you can also get leather bands for the watch. It’s rated at 5ATM for water resistance, so you can swim with it.

The Galaxy Watch Active2 can automatically track workouts, which is surprisingly a big plus for the Samsung watch, as Google’s Wear OS watches don’t have automatic workout detection. The heart rate monitor also helps the watch track the intensity of your workout.

The watch even has sleep tracking built in, a feature that’s common on smartwatches but only recently came to the Apple Watch. Based on your metrics, the companion app generates insights to help improve your overall fitness.

Just like with any other smartwatch, you’ll also get notifications from your phone and you can access many popular apps.

But it doesn’t have the Google Assistant or Amazon Alexa since it uses Samsung’s Bixby assistant. And its battery life is decent, with reviewers rating it as lasting roughly between 1.5 to two days, but it’s not as long-lasting as Fitbit’s watches. 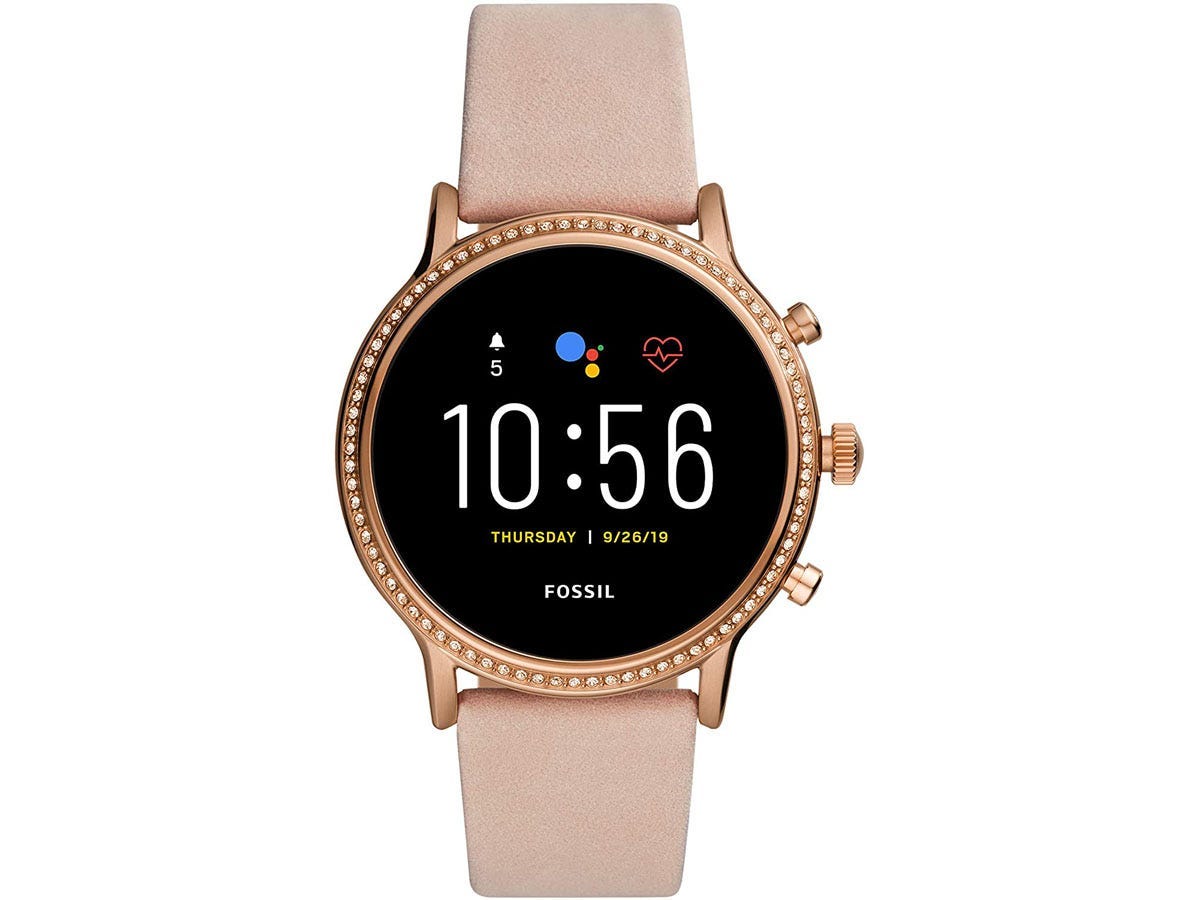 The Fossil Julianna HR is a sleek smartwatch with a feminine design, a heart rate monitor, GPS, NFC, and the power of WearOS.

Cons: It’s a bit chunky, not as good with iPhone

If you’re an Android user who wants a feminine smartwatch, you’re in luck. Over the past few years, fashion brands and watchmakers have been making great Wear OS smartwatches. Fossil’s smartwatch line continues to grow each year, and we are looking forward to testing its new Gen 5E watches, but until then, we still recommend the Julianna HR.

In the new version, the watch casing is smaller and less bulky, and there’s also the latest tech like a heart rate sensor, GPS, and NFC for mobile payments.

Fossil offers several different finishes for the Julianna’s watch casing. I love the simple rose gold casing and leather strap option, but you can also get one with a metal bracelet.

If you don’t like any of the included straps, Fossil and other brands sell dozens of 22mm watch straps you can choose instead to really make the Julianna your own.

It’s a chunky watch, which is great for those who like bigger watches. Even though it’s stylish, this smartwatch is also waterproof up to 3 ATM, so you can swim with it on.

As for the tech inside, the Julianna runs Wear OS (previously known as Android Wear) and works with thousands of apps on the Google Play Store. You can answer texts, interact with notifications, and choose your own watch face – just like you would on any other smartwatch. Fossil has lots of nice watch faces in feminine colours, too.

It will work with both Android phones and the iPhone, but it’s best with Android devices. When Android Wear watches are paired to the iPhone, a lot of functions no longer work, and you’re left with a pretty watch that only gives you notifications.

The best smartwatch for fashionable men 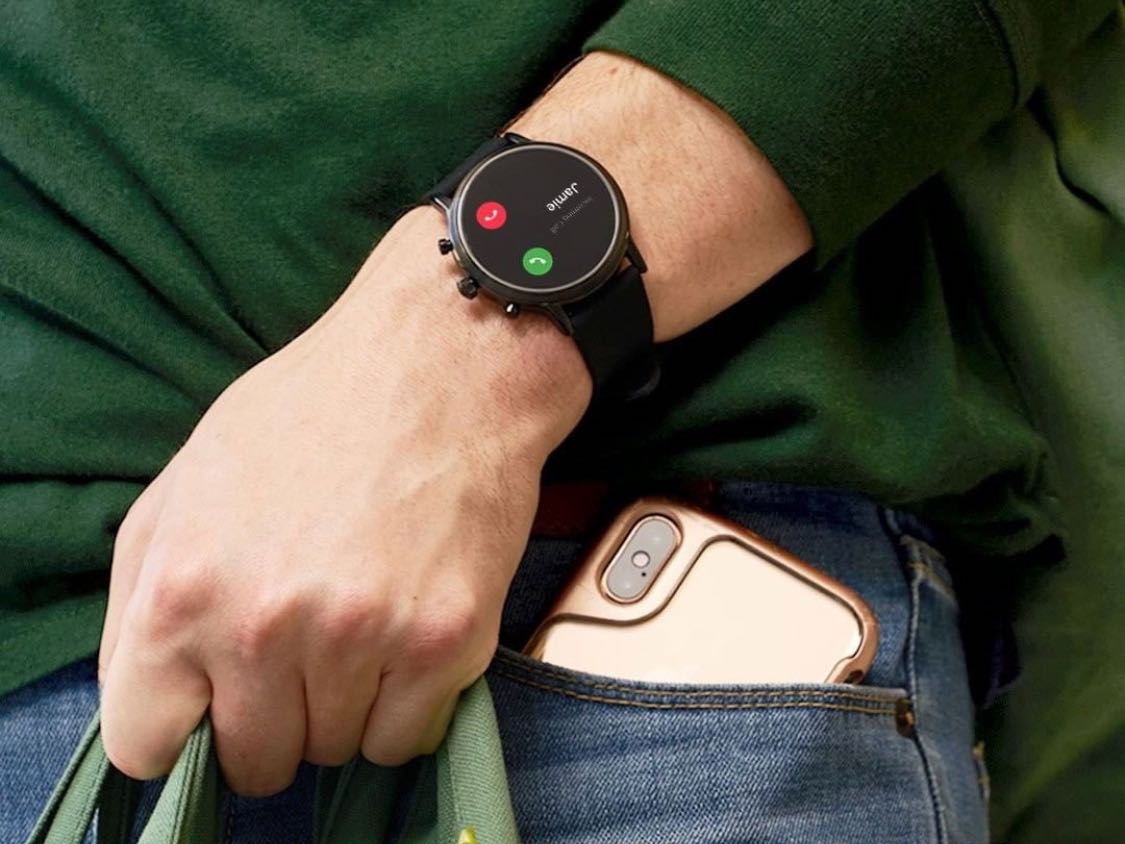 with its classic design and smartwatch powers.

Pros: Classic watch look, WearOS, use any 2mm watch band you like

Fossil is one of the few fashion brands and watchmakers that’s making actively gorgeous smartwatches. The Q Carlyle HR is the ultimate WearOS watch for men who want their smartwatch to look like a high-end wristwatch.

It’s a hefty smartwatch that feels luxurious, but it doesn’t cost a couple thousand dollars like the Tag Heuer Connected smartwatch. Fossil is selling it for even cheaper now at $US199 compared to its regular $US295 price. The stainless steel casing paired with a chunky metal watch band give it a premium look and feel, but you can choose a number of different finishes.

You can get the smartwatch in dark grey, black, and silver finishes with metal or leather straps. The straps are interchangeable with any 22mm watch band you can buy from Fossil and others.

When it comes to tech, the Q Carlyle isn’t the most high-end one on this list, but it runs WearOS and it’s compatible with thousands of apps. You can send texts, view your notifications, and track your activity – just like you would on any smartwatch. The latest generation also has NFC for mobile payments, GPS, and a heart rate monitor. 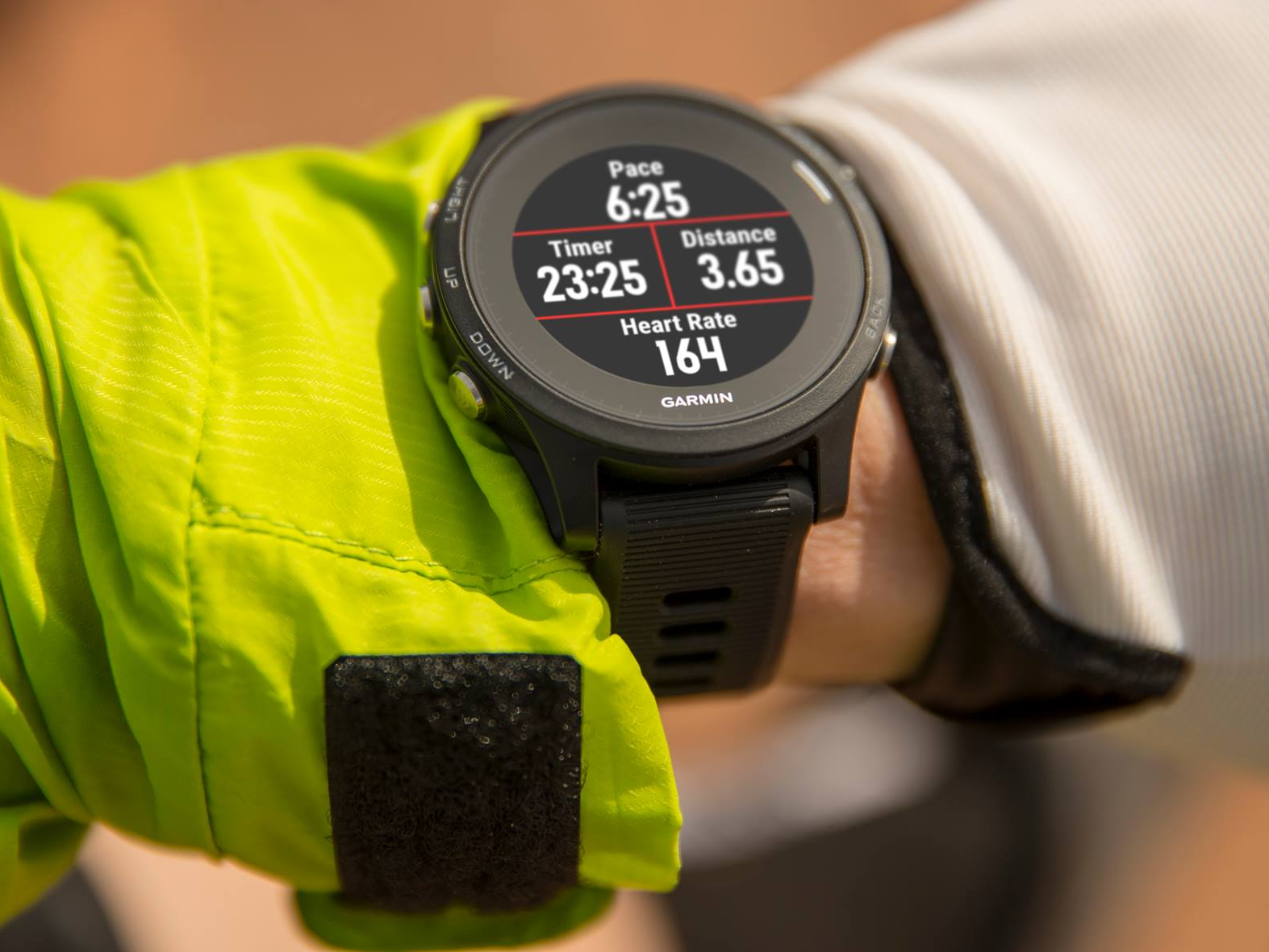 Cons: Expensive, reduced GPS accuracy when running on a track, built-in thermometer only measures temperature right above your skin

We had a competitive distance runner try the $US500 Garmin Forerunner 935 for 1,000 miles – and it’s better than any running watch he’s ever used. With that testimonial in mind, the Forerunner 935 is our top choice for fitness enthusiasts, at least for those who can allocate up to $US500 for a device that’s specifically geared towards fitness.

What else we considered 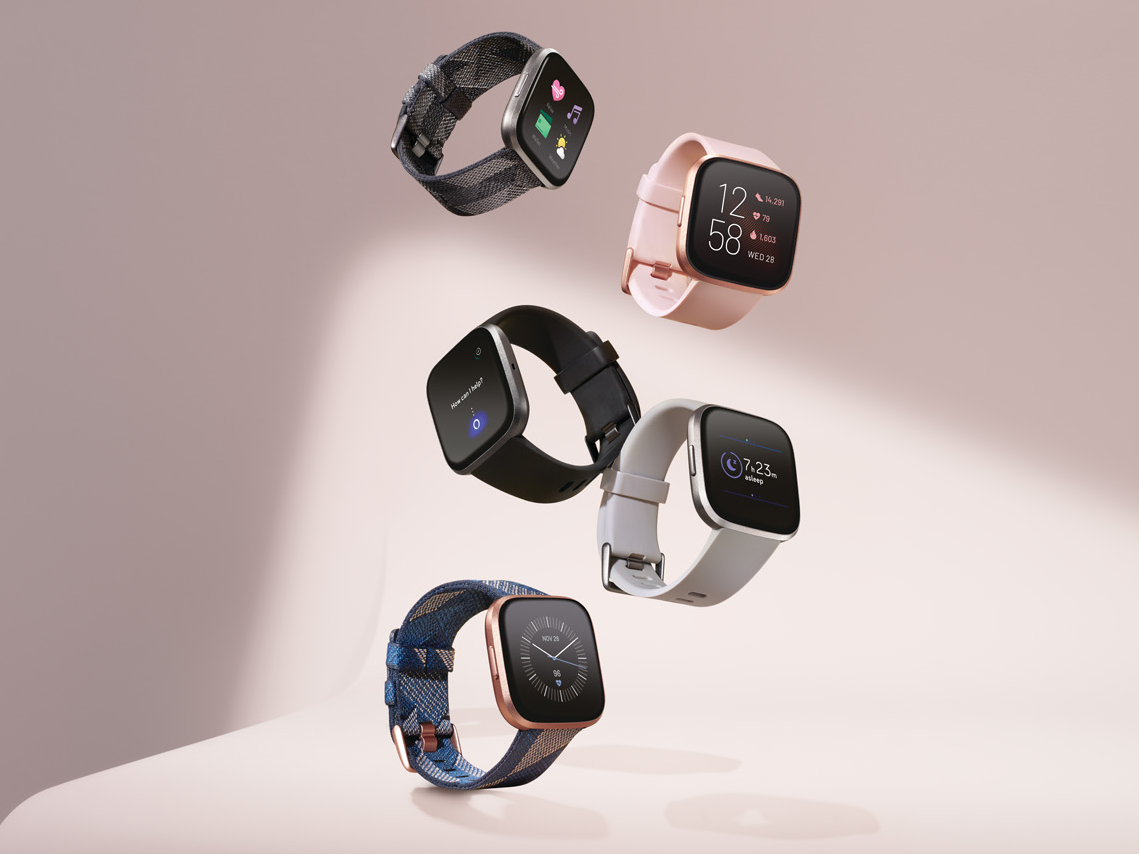 While these are our top picks, there are several other options worth considering based on your needs, preferences, and budget. Here’s a look at some other contenders: