28 of the best fall fashion looks worn by royals 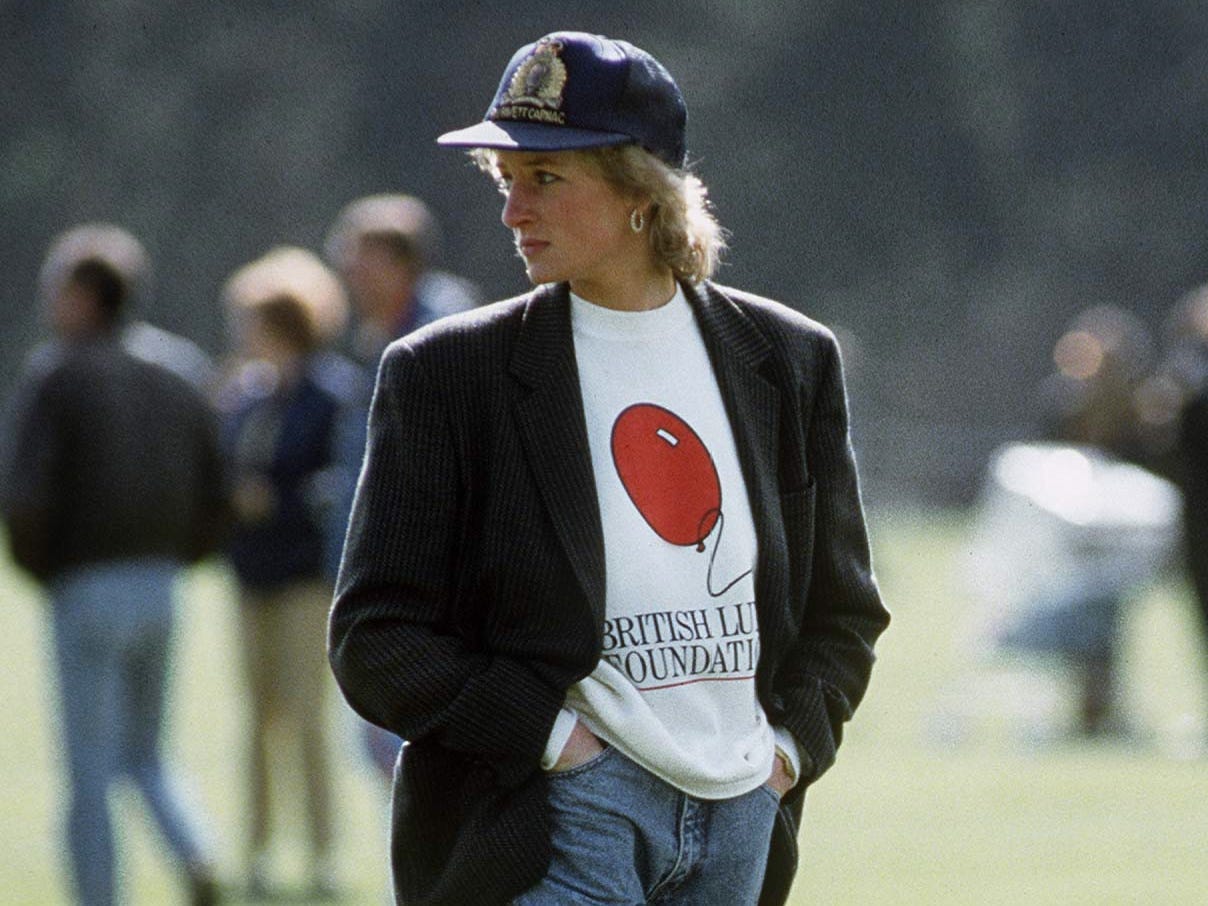 Tim Graham Photo Library/Getty ImagesOne of Princess Diana’s most iconic looks is this jeans, blazer, and sweatshirt combo she wore in 1988.

Royals around the world have mastered the art of fall fashion.

Here are 28 of the best royal fall fashion looks. 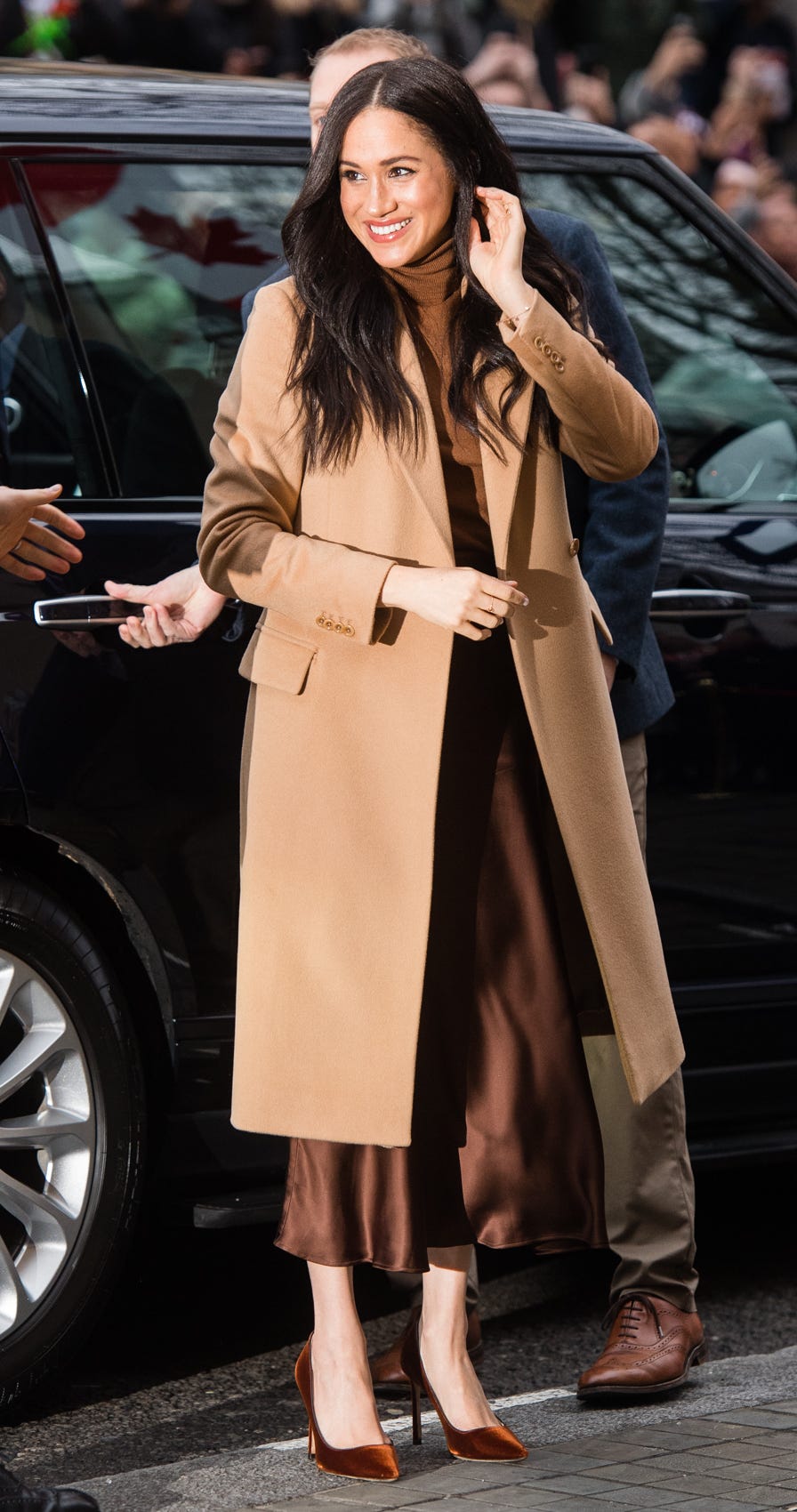 Though the look made its debut in January, it’s perfectly in line with this year’s fall trends of midi skirts and fun textures like velvet. 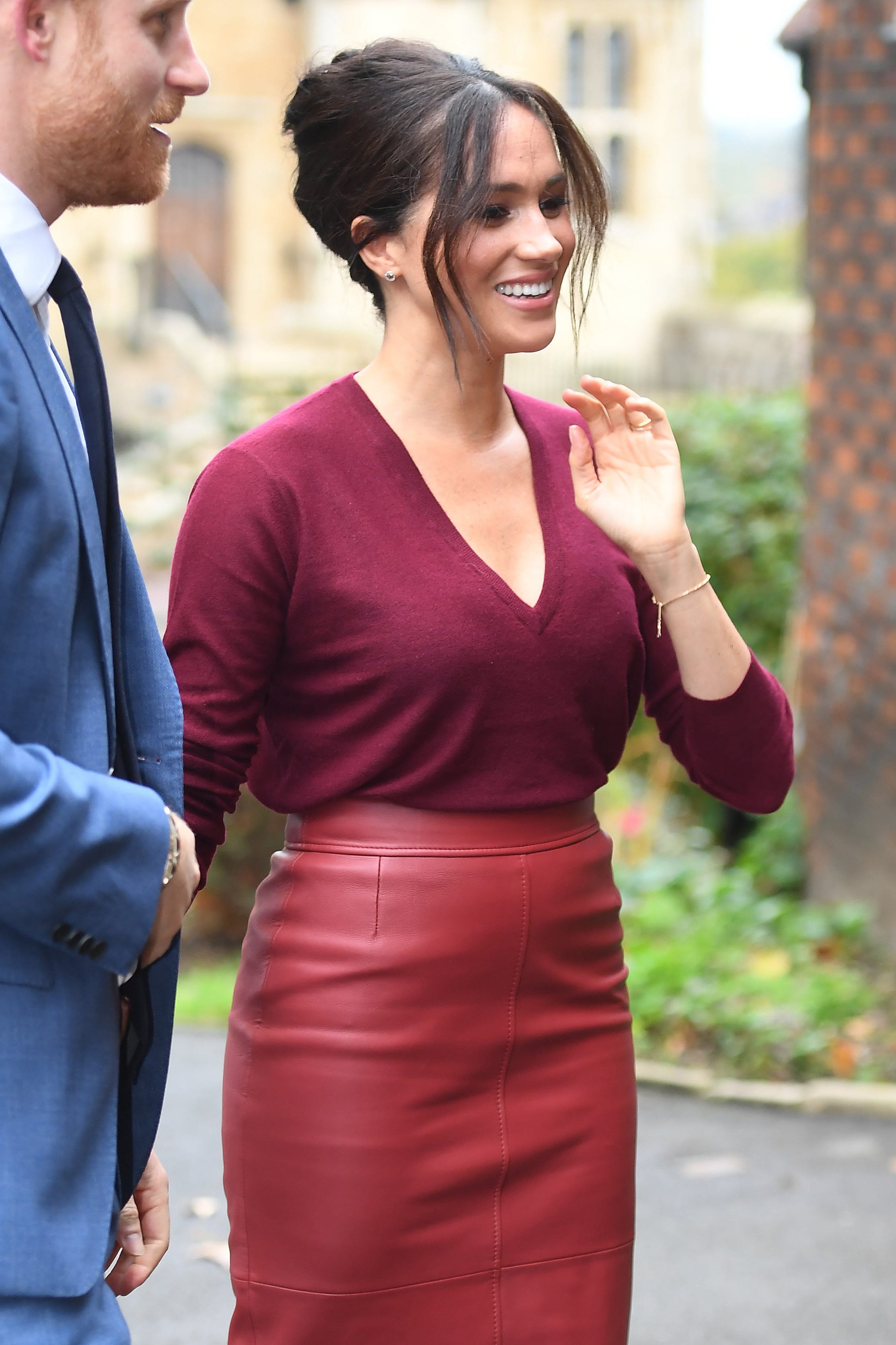 Markle has been known to opt for monochromatic looks, often with a touch of leather or satin. 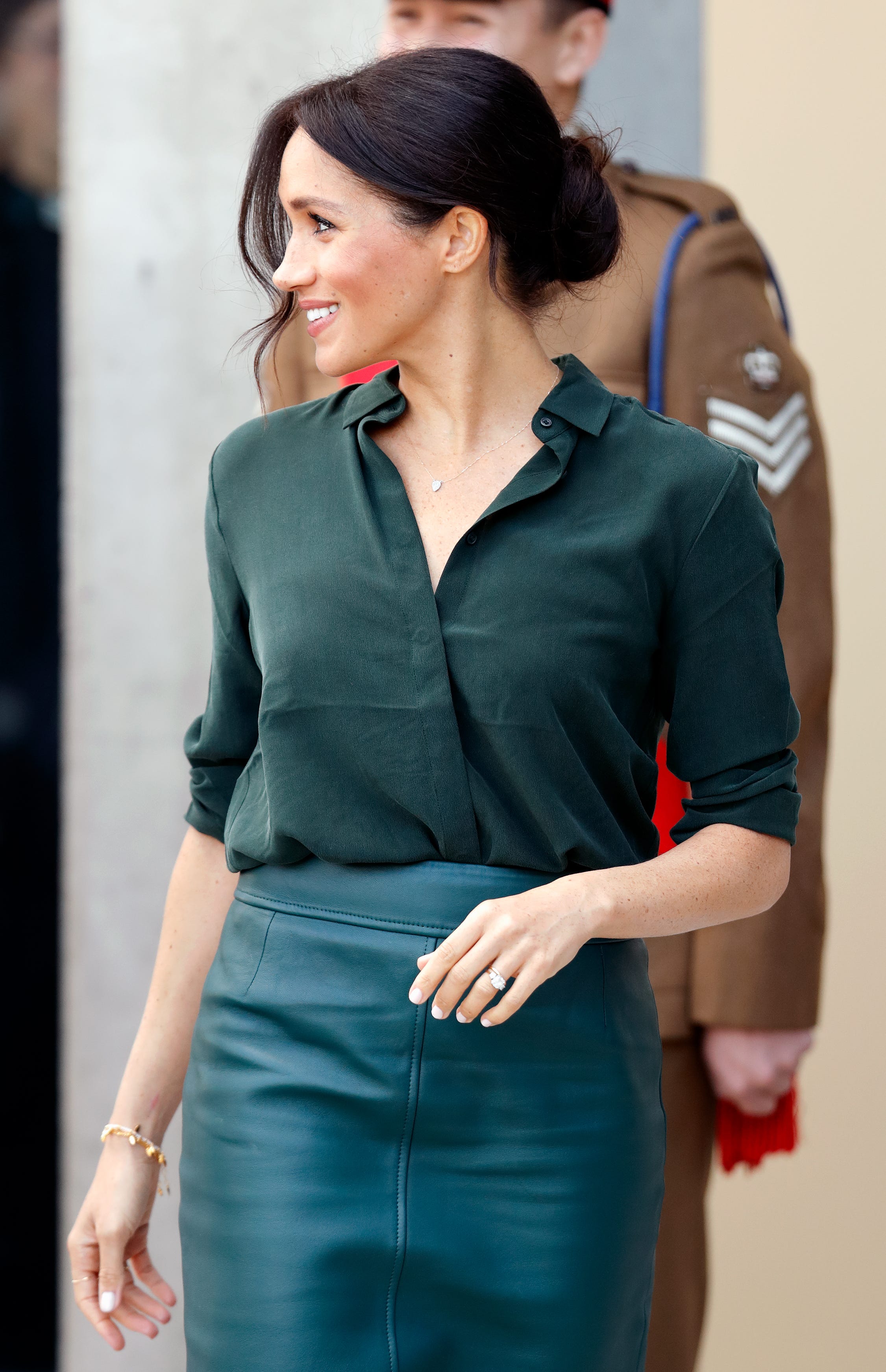 While the green $US595 Hugo Boss skirt and $US99 green silk blouse from & Other Stories are currently both unavailable, leather skirts are perfect for the chilly fall weather.

Markle dressed down for a New Zealand appearance in October 2018. She paired a simple ensemble of black pants and a black turtleneck with a pair of wedge booties and a statement grey coat.

Meghan Markle wore this green sweater layered over a classic button-up in February 2014, but the look is perfect for the fall season. 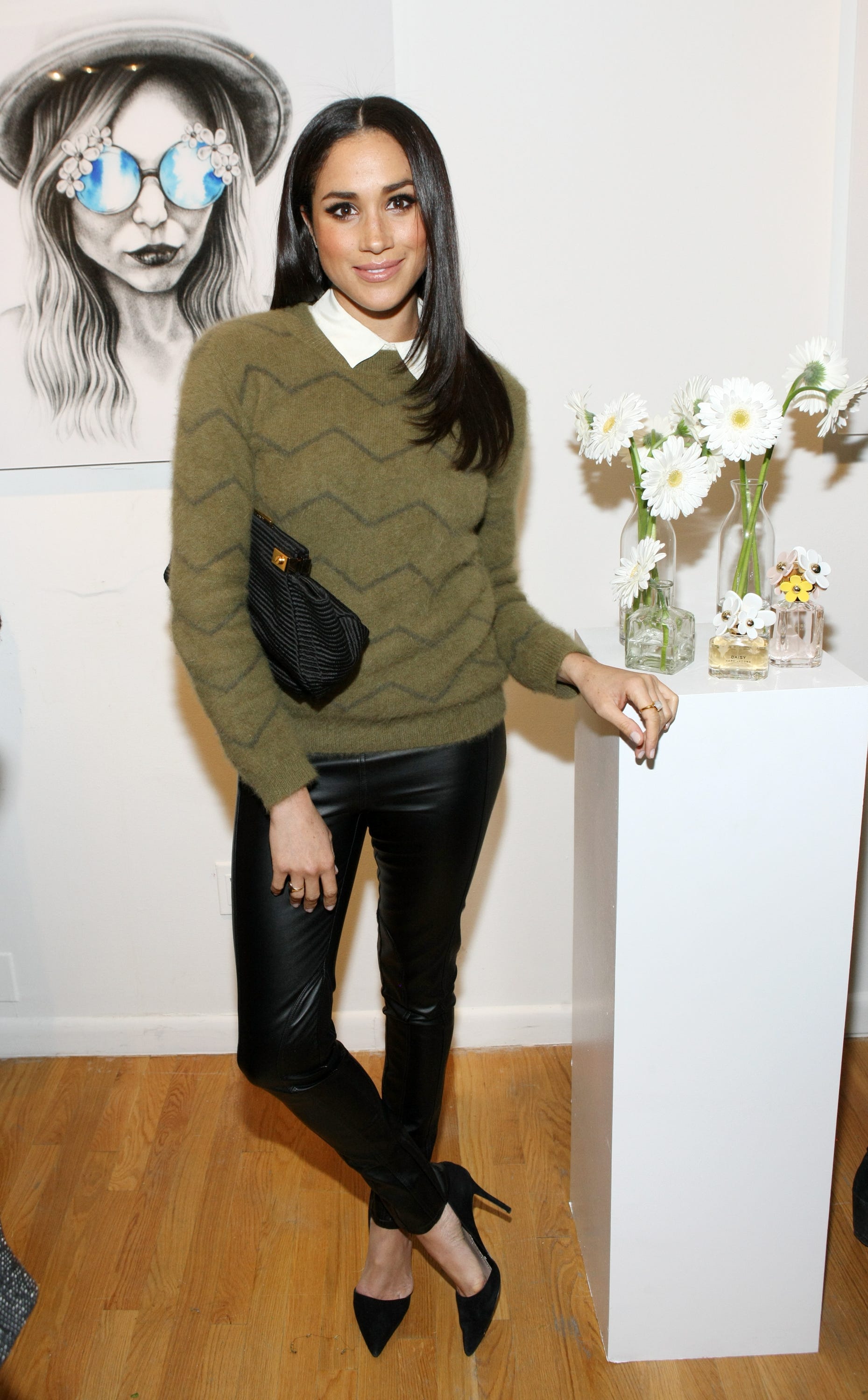 Markle paired the olive-toned sweater with a pair of chic black satin pants and pumps.

Nothing says apple picking and bonfires like a simple jean jacket, and Meghan Markle certainly turned heads when she wore this classic look in September 2019. 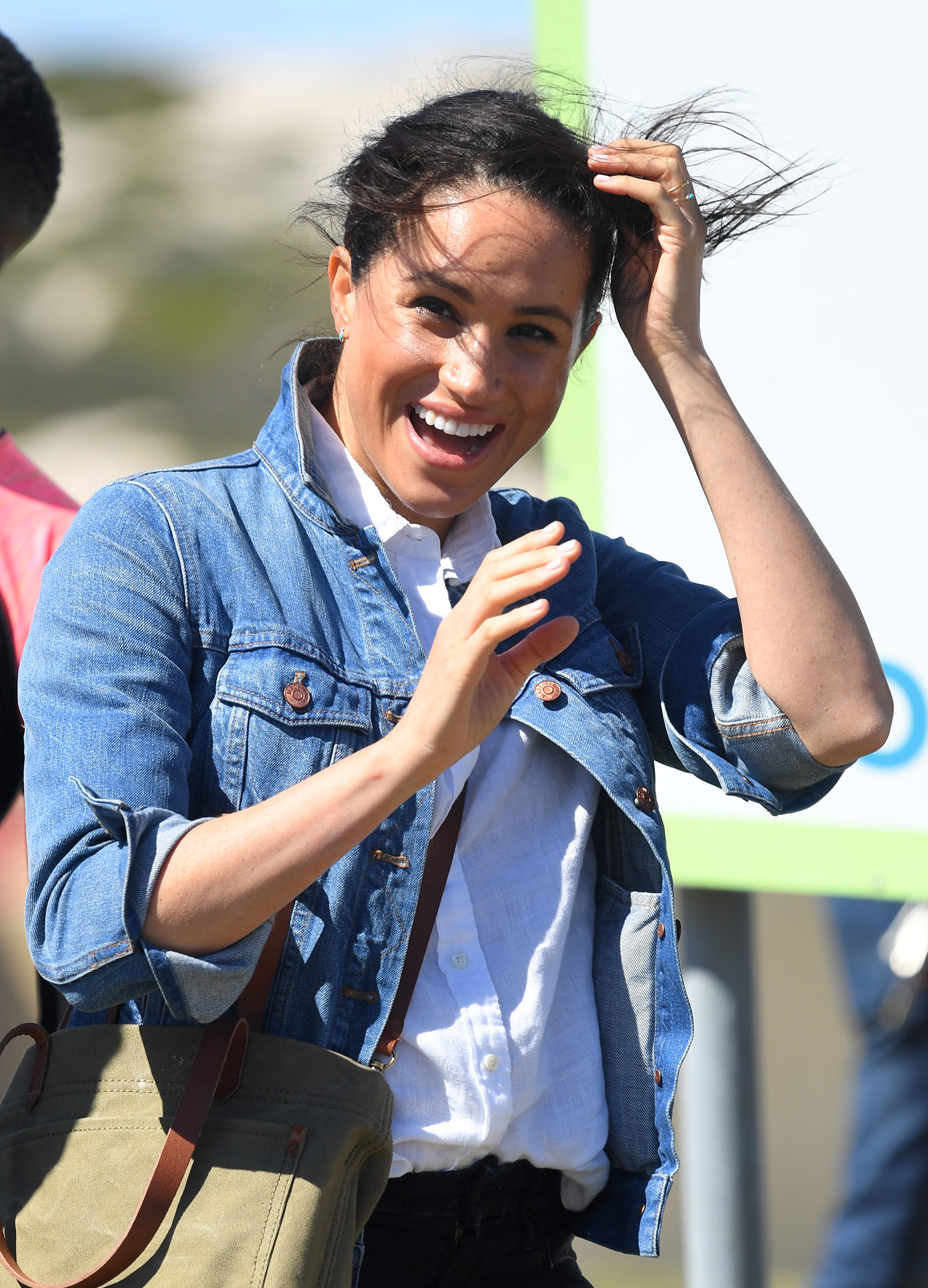 Karwai Tang/WireImage/Getty ImagesMarkle during her royal tour of South Africa in September 2019.

During her time as a working royal, Meghan Markle was typically known for wearing elegant dresses, sophisticated coats, and heels. However, she certainly isn’t afraid of a more casual look. 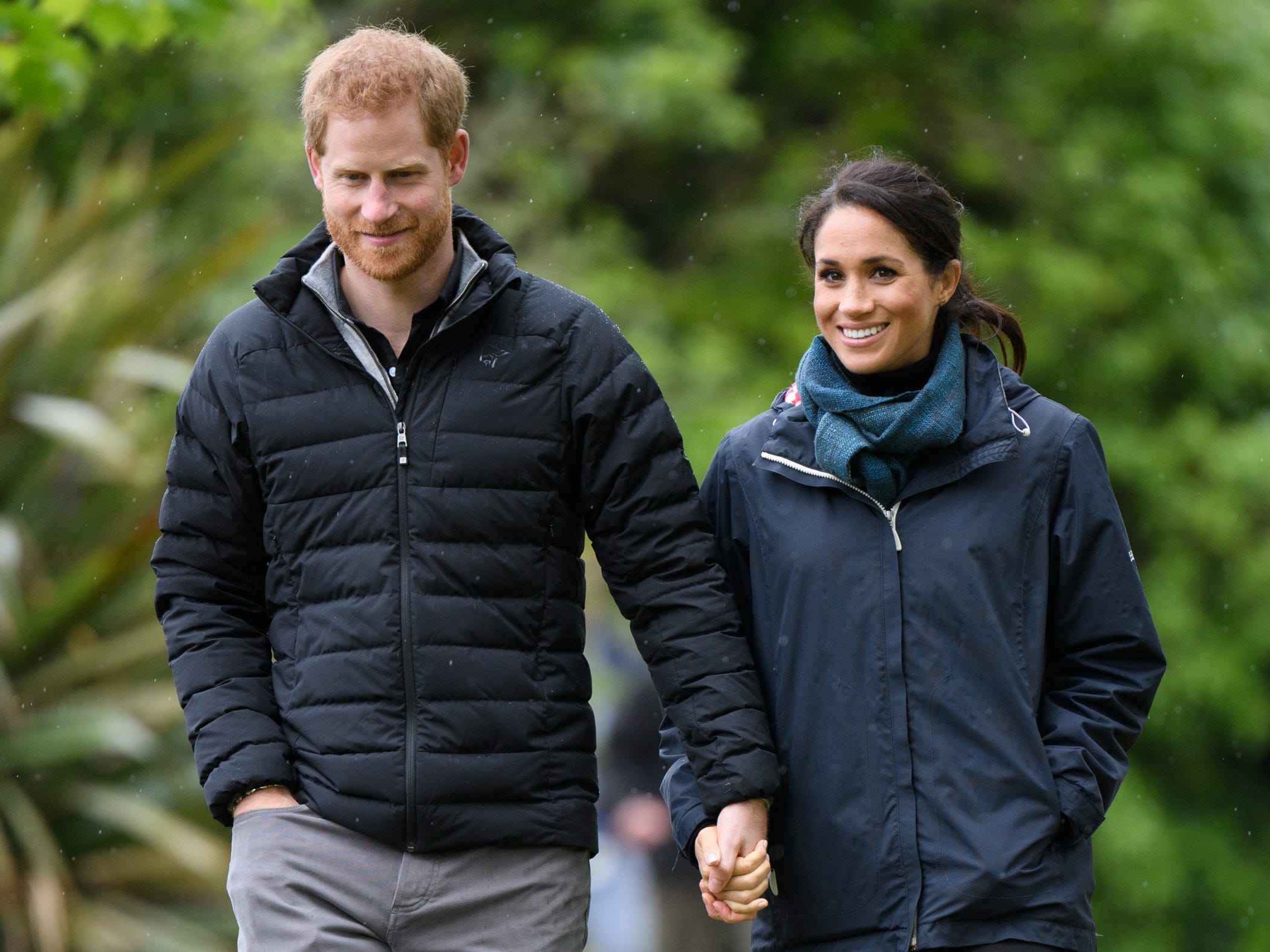 Both he and wife Meghan Markle wore outdoorsy jackets on an outing in October 2018.

Though we’re used to seeing Kate Middleton dressed up, this casual fall look proved she can dress down and look just as stylish. 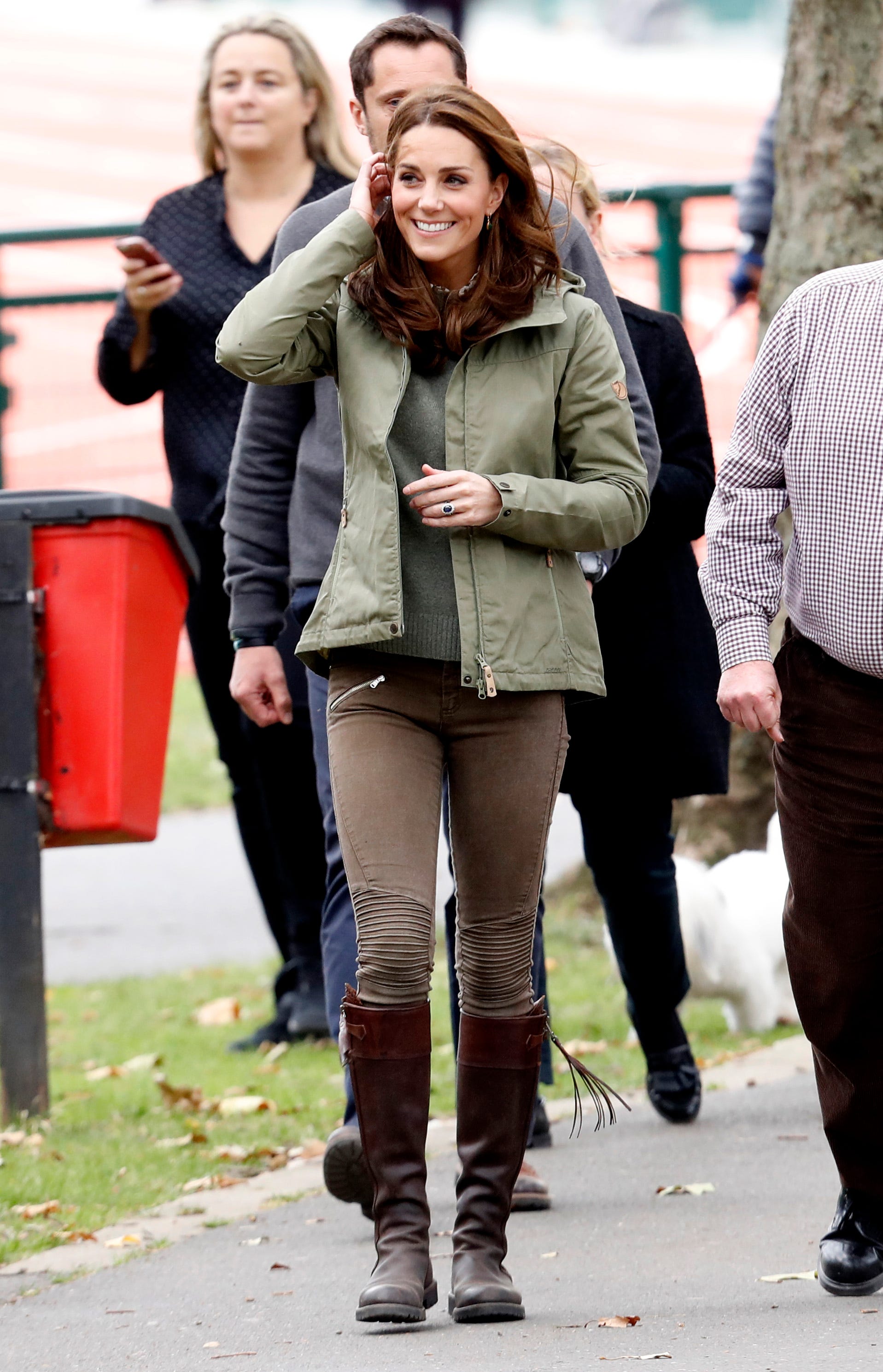 Known for wearing affordable fashion brands, Middleton paired a pair of brown cargo-style pants from Zara with a light green jacket and her favourite pair of Penelope Chilvers boots.

Middleton wore this walnut brown printed dress by Orla Kiely to a charity event in 2013. 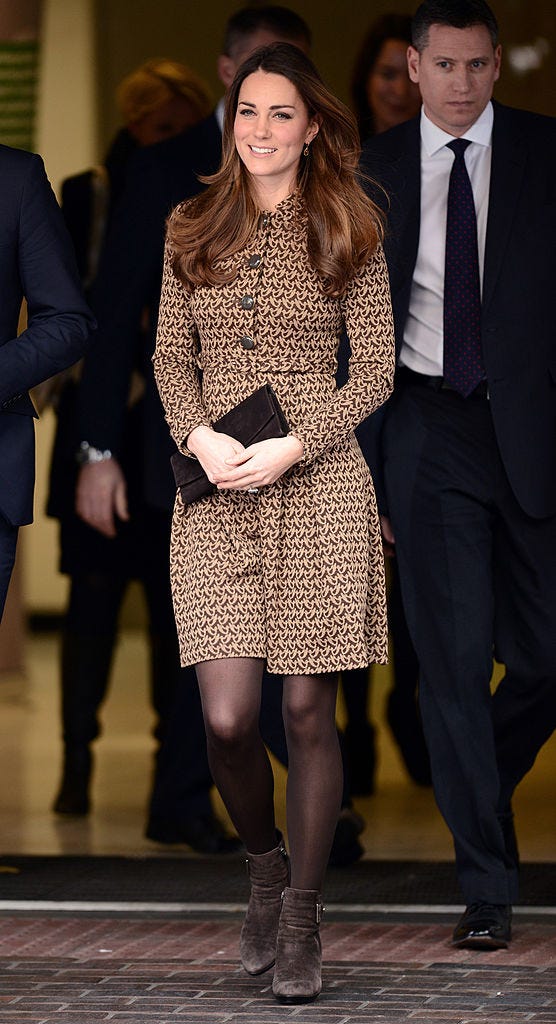 Karwai Tang/WireImage/Getty ImagesCatherine, Duchess of Cambridge visits the Only Connect and ex-offenders projects on November 19, 2013.

From the button details on the dress’ bodice to the duchess’ brown suede booties, the look is chic enough for a royal engagement yet casual enough for anyone to wear out on the town this fall.

Nothing screams “fall” more than this matching maroon blazer and skirt ensemble. 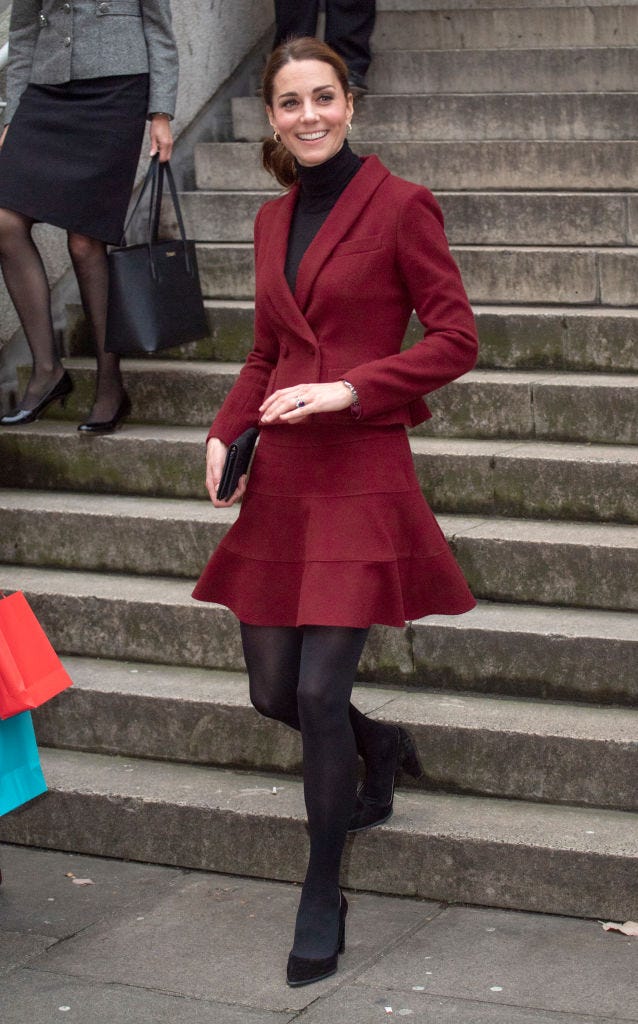 She also wore a pair of simple black suede pumps, tights, and a turtleneck.

One of the duchess’ most iconic fashion moments is this wine-coloured sweater teamed with a pair of green culottes. 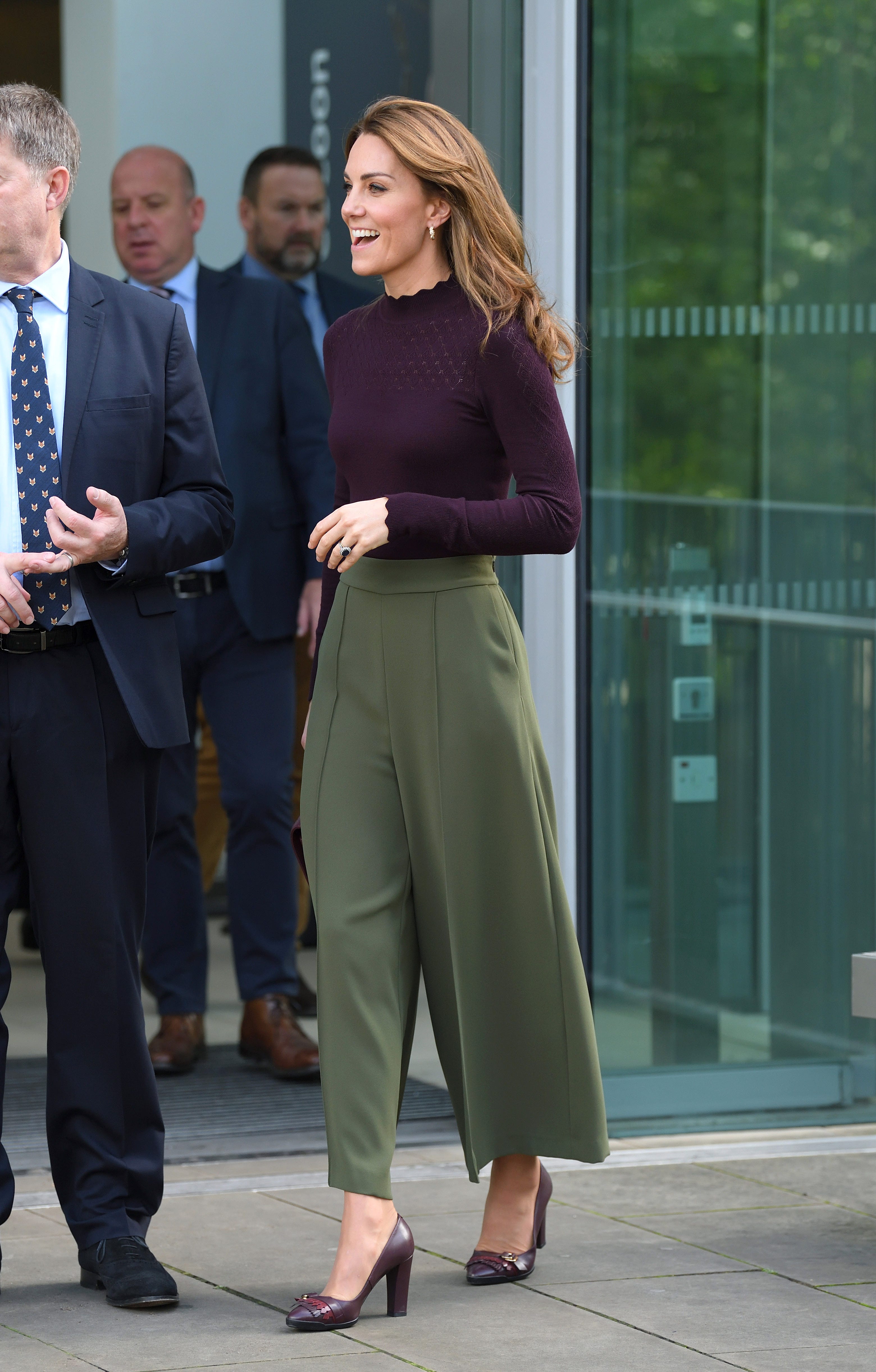 The royal wore pants by high-street fashion brand Jigsaw with a burgundy knit sweater by Warehouse. She added a matching Chanel handbag to complete the fall-ready look.

Middleton wore a classic grey blazer with a pair of simple black pants and a turtleneck sweater in 2018. 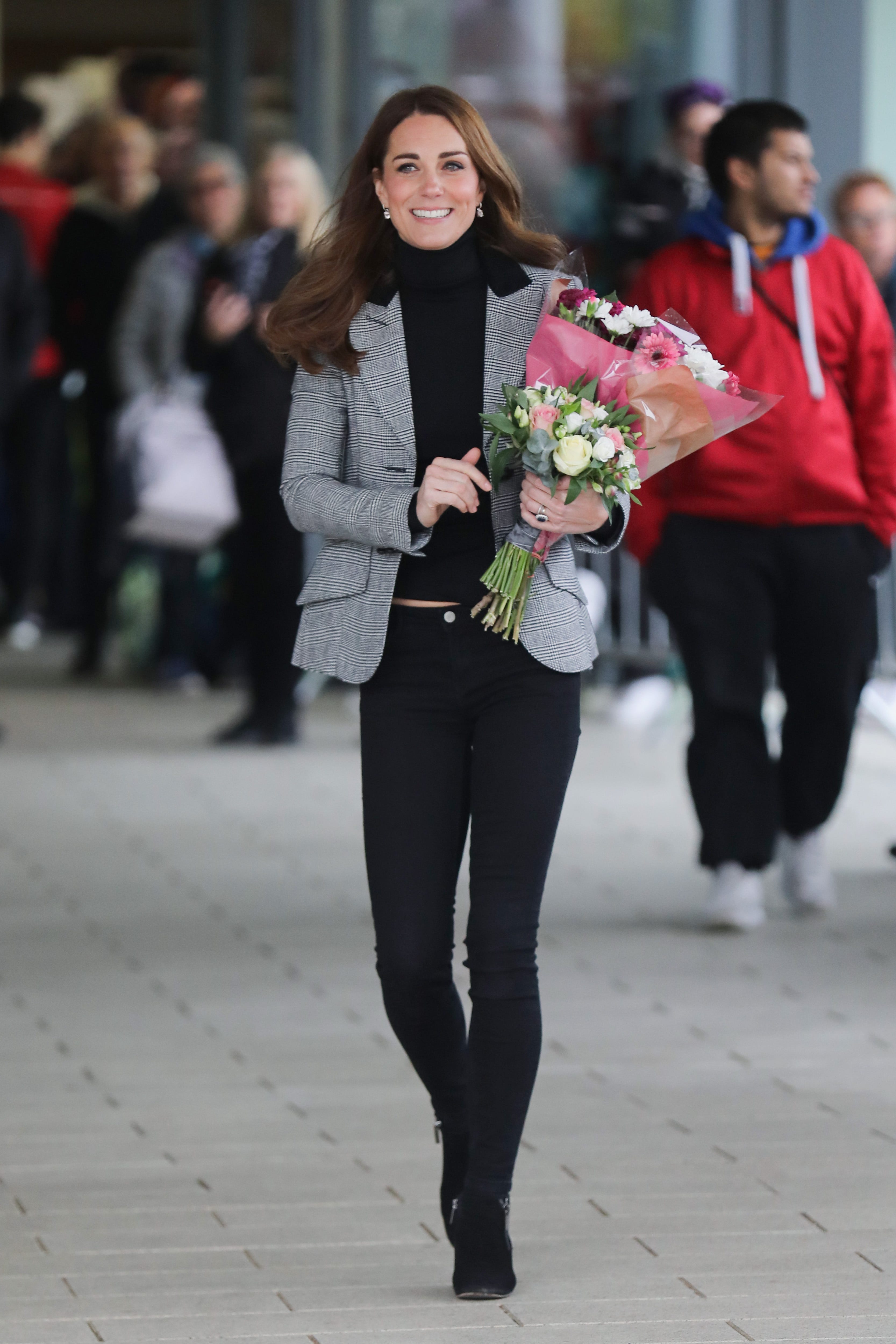 Blazers are a common trend during the fall season.

Middleton wore this army green jacket with a chunky maroon turtleneck sweater and a necktie in 2019. 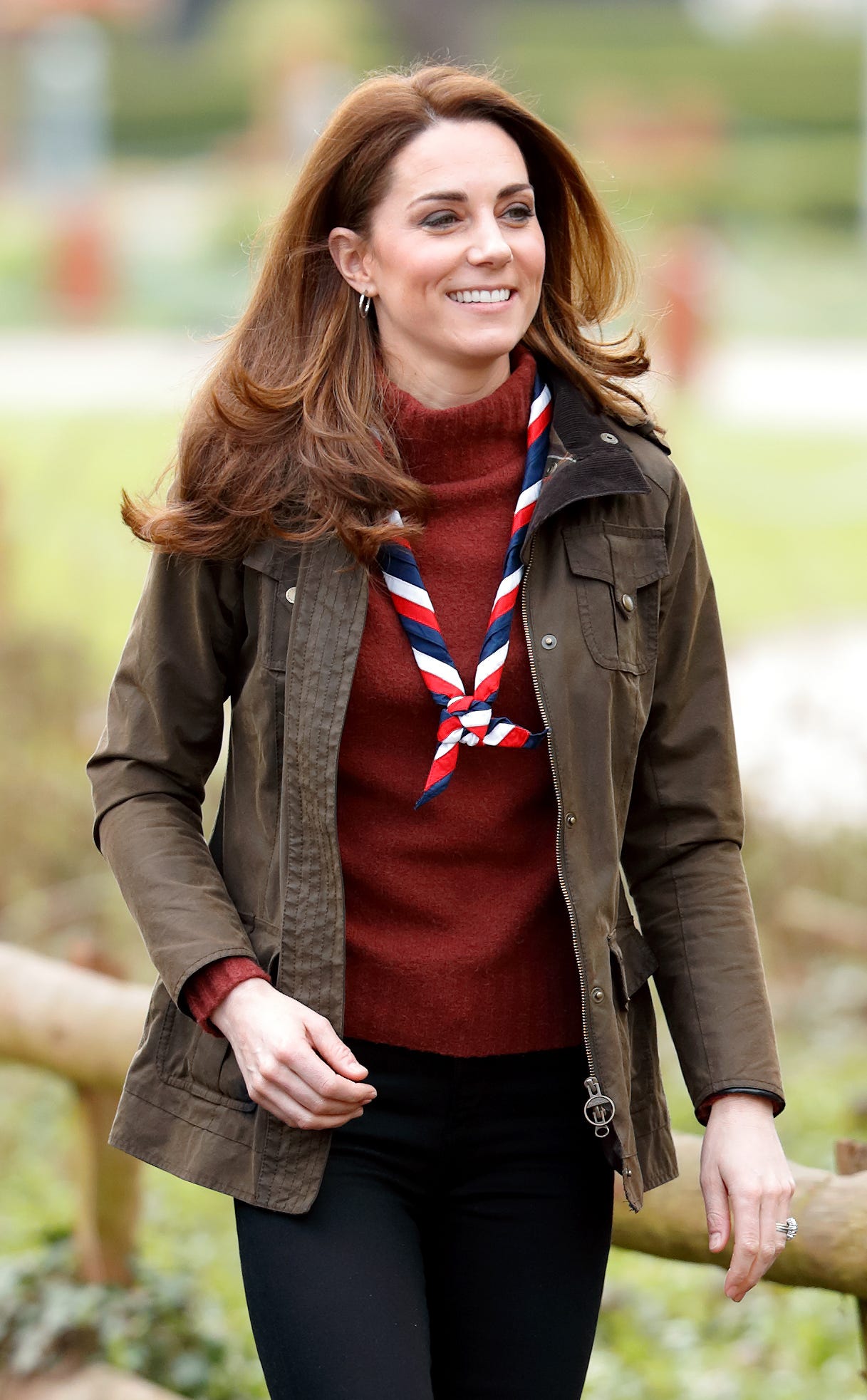 Bandanas and neckties, either worn around your neck or as a hair accessory, are one of the biggest fall fashion trends this year.

Princess Beatrice has also been known to rock a fall look. 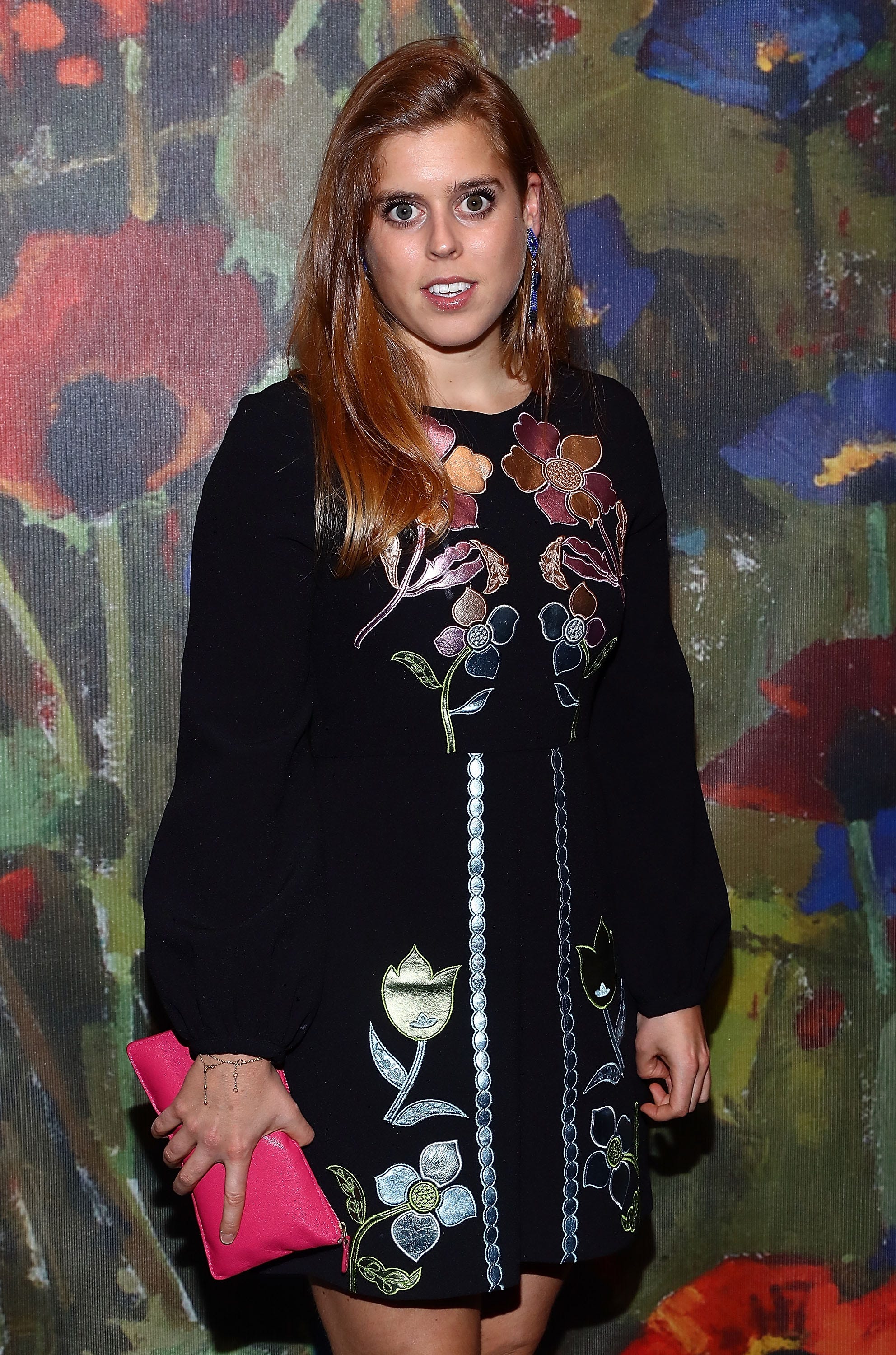 The royal wore a black dress with metallic floral appliqués to an art event in New York City in 2017. 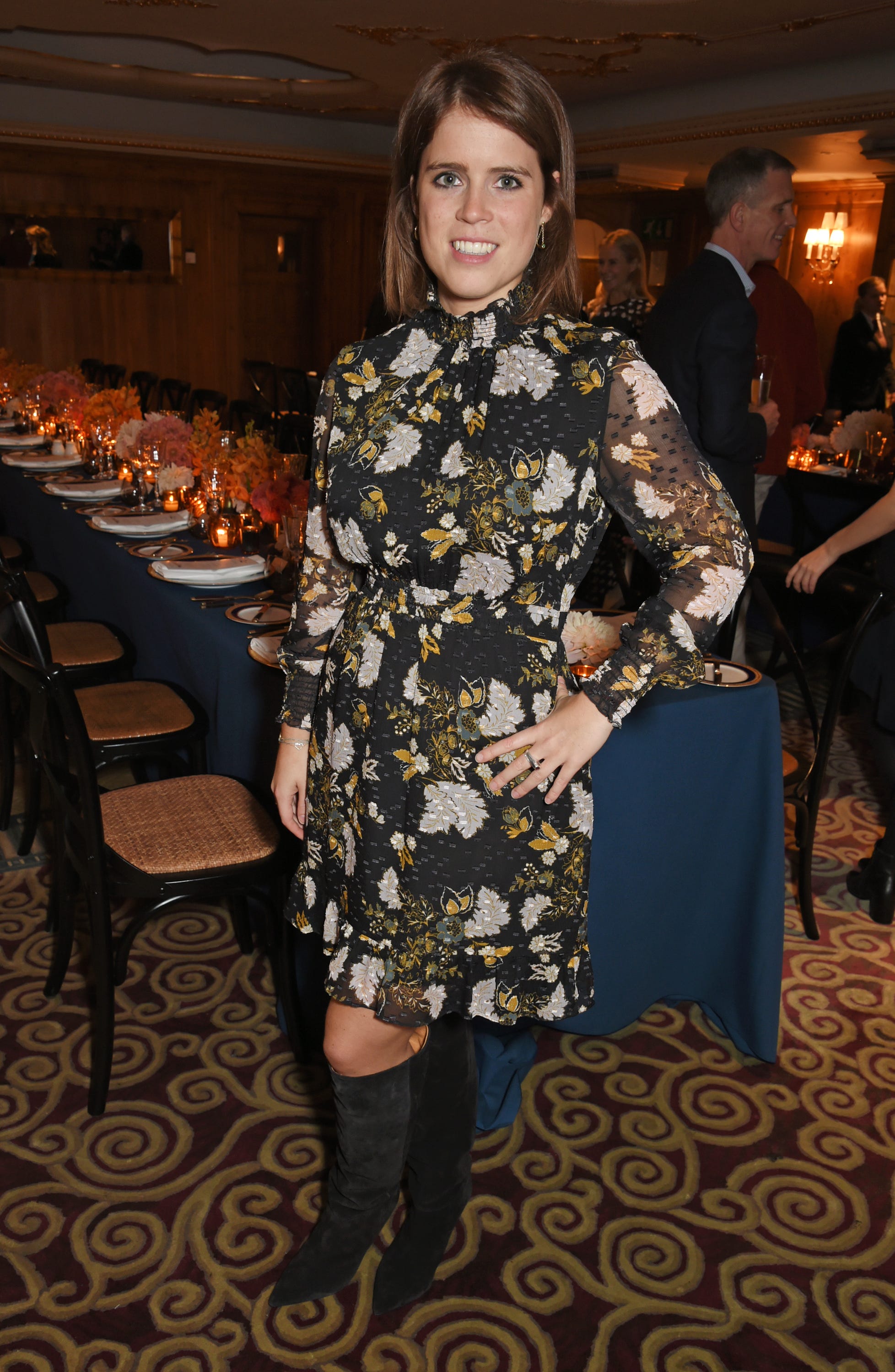 The royal paired the stunning look with a pair of suede knee-high boots.

Princess Eugenie rocked a seemingly fall-inspired look to a Dior event in 2019. 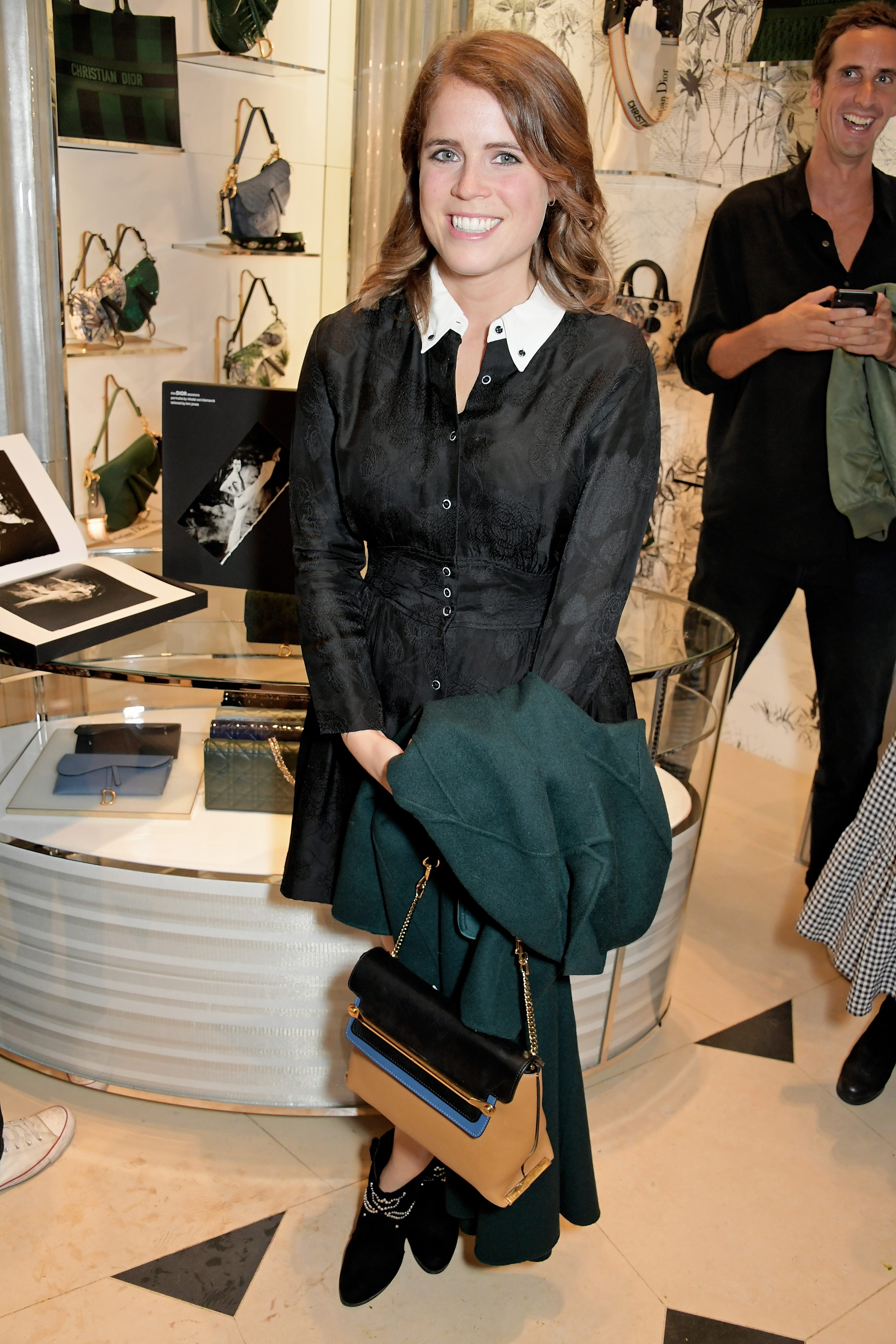 The simple, structured black dress featured a white collar that made the princess look like a much chicer version of Wednesday Addams. 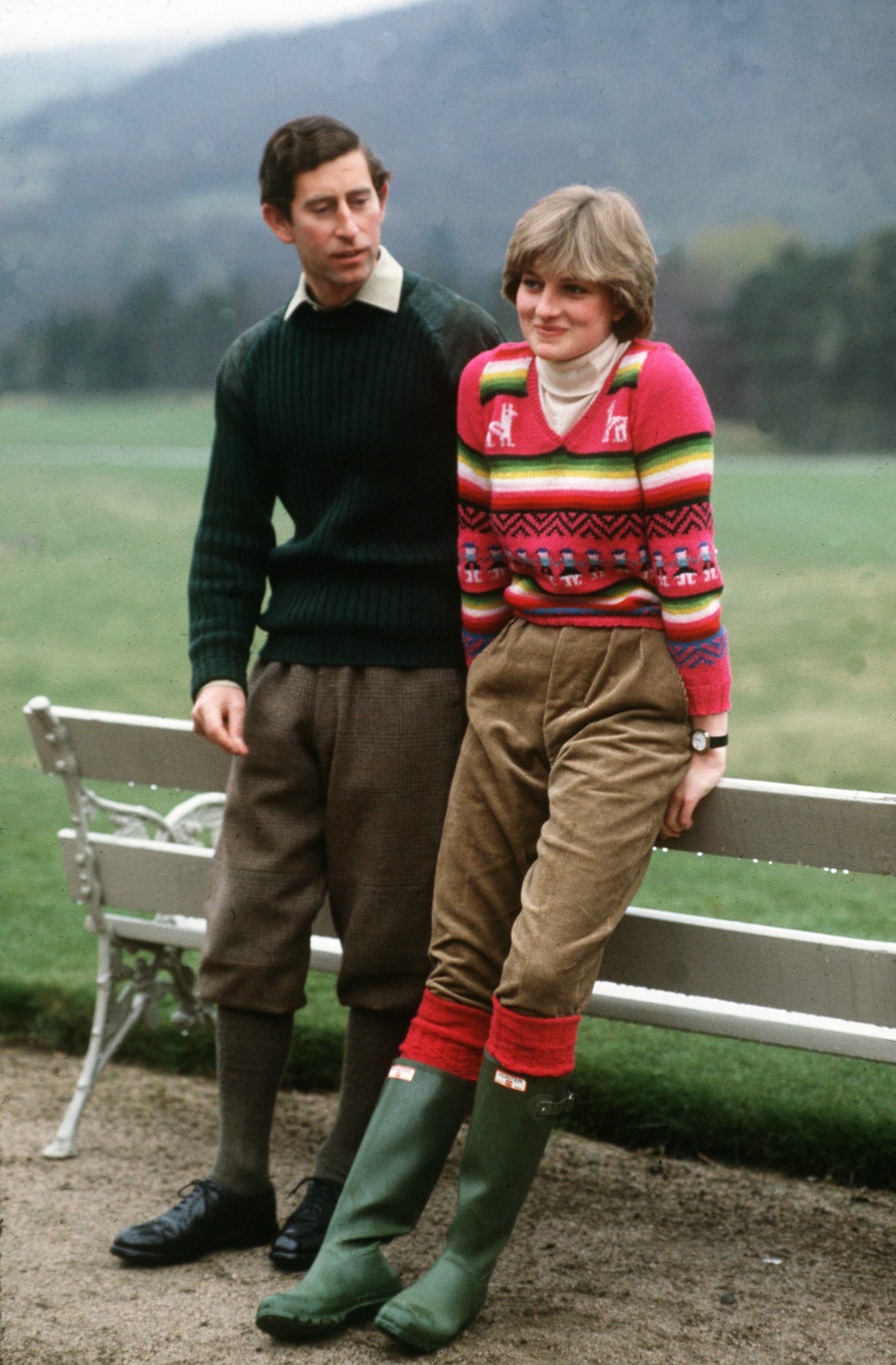 Fair Isle and Aztec-inspired sweaters were very on-trend in the ’80s, as was corduroy, which remains popular in current fall and winter trends. Despite Princess Diana wearing the look in 1982, it would fit right in with fall fashion trends of today.

Princess Diana wore a wine-coloured ensemble with a matching hat in October 1985. 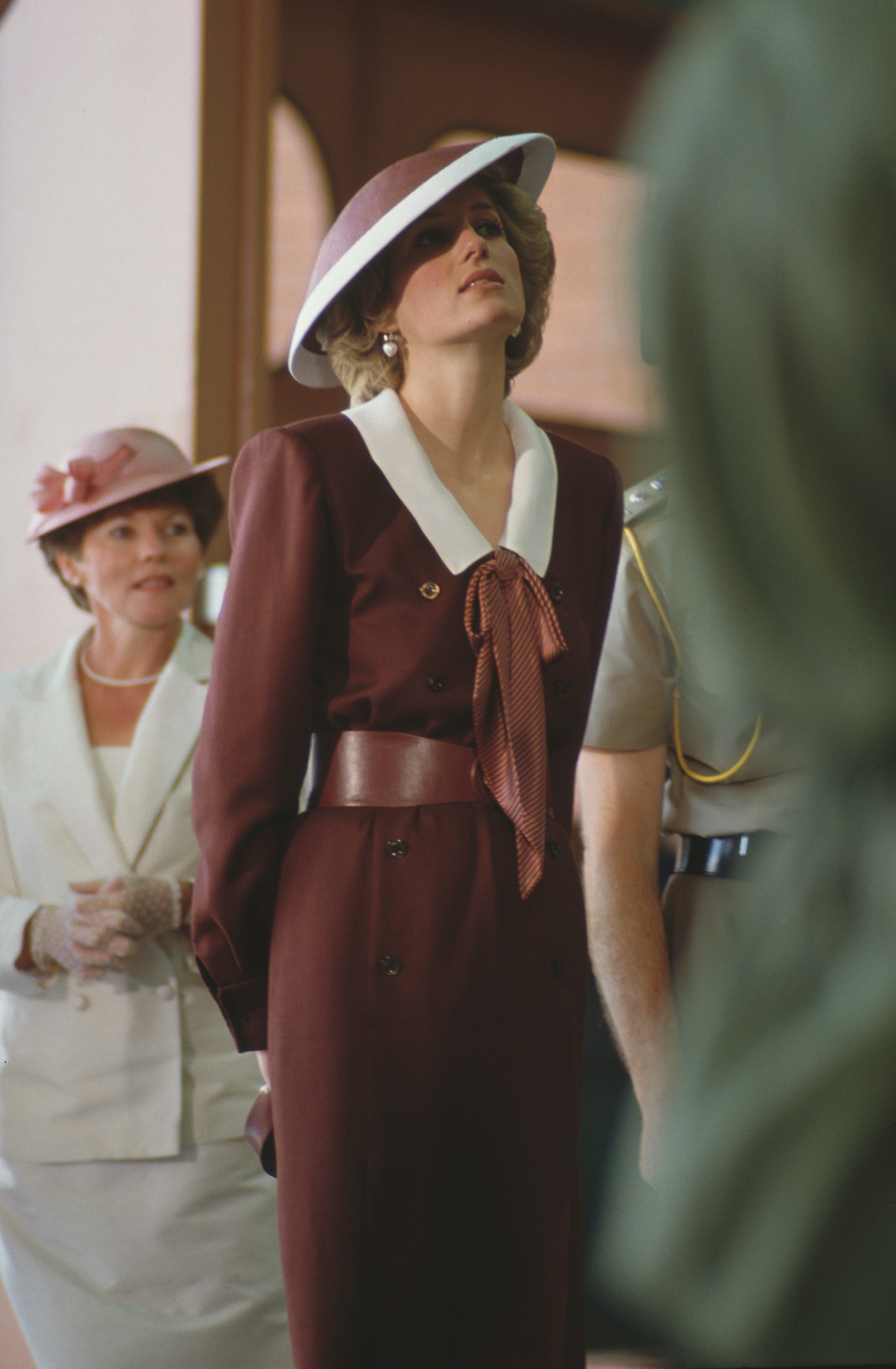 The bow on the royal’s collar coordinated perfectly with her oxblood leather belt.

One of Princess Diana’s most iconic looks is this jeans, blazer, and sweatshirt combo she wore in 1988. 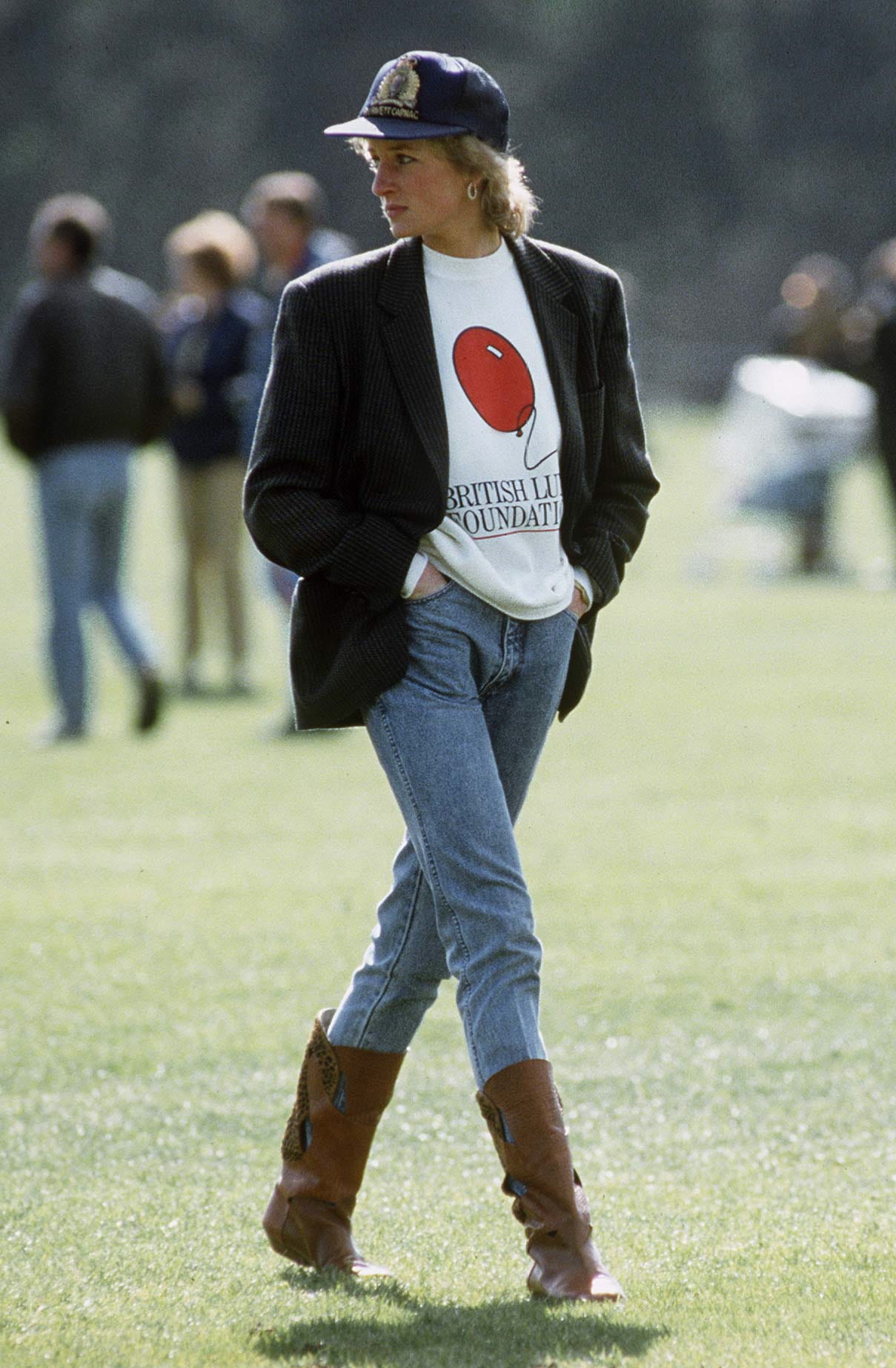 The super-casual look is still effortlessly chic and fall-appropriate.

The “people’s princess” often wore tartan during her time as a royal. The pattern was a major trend in the ’80s – it still is each and every fall season.

While out shopping in October 1994, Princess Diana looked sophisticated in belted white pants, a simple turtleneck, and an olive green blazer. 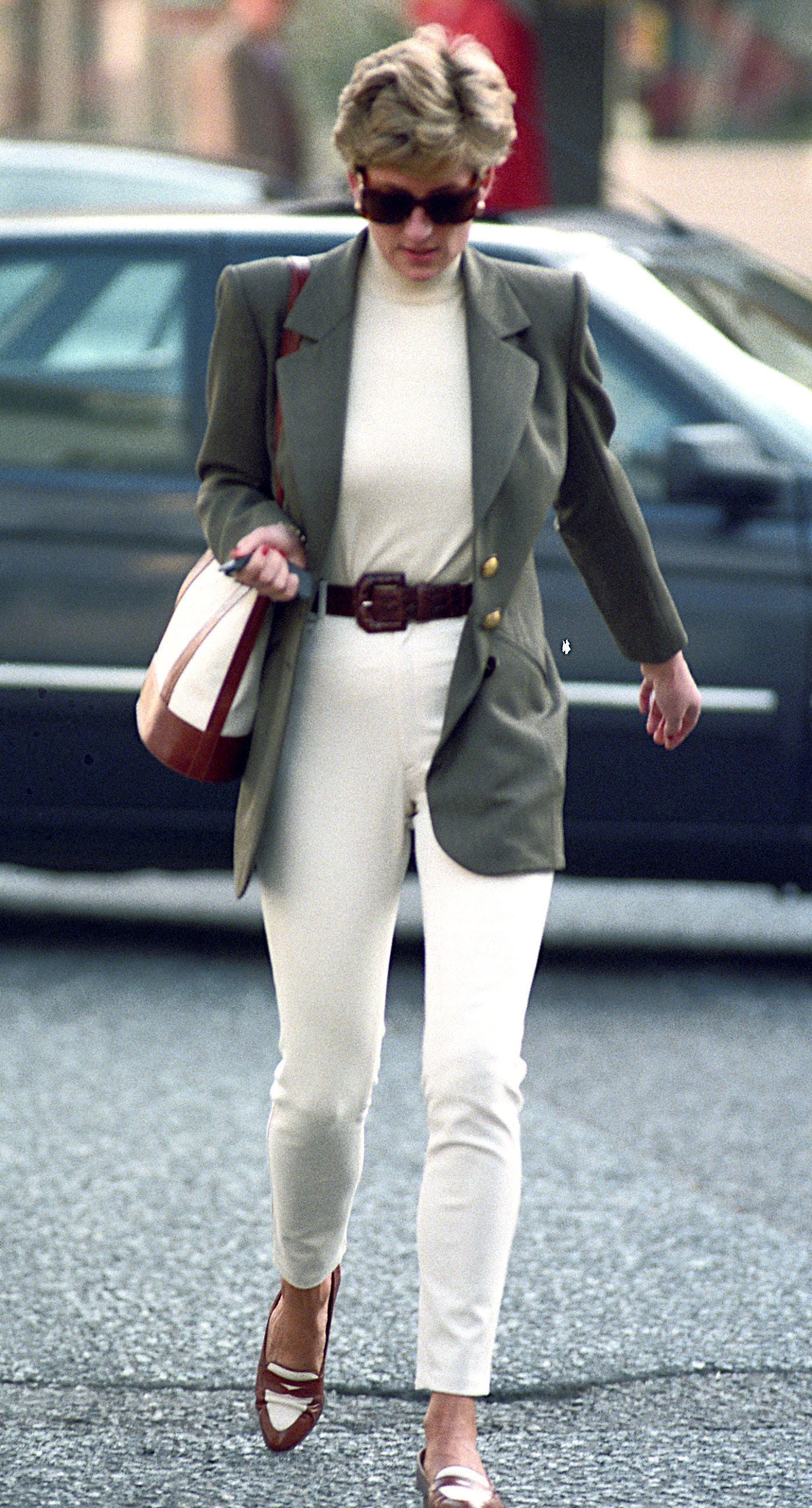 Queen Elizabeth herself has also worn chic, fall-appropriate styles in the past. 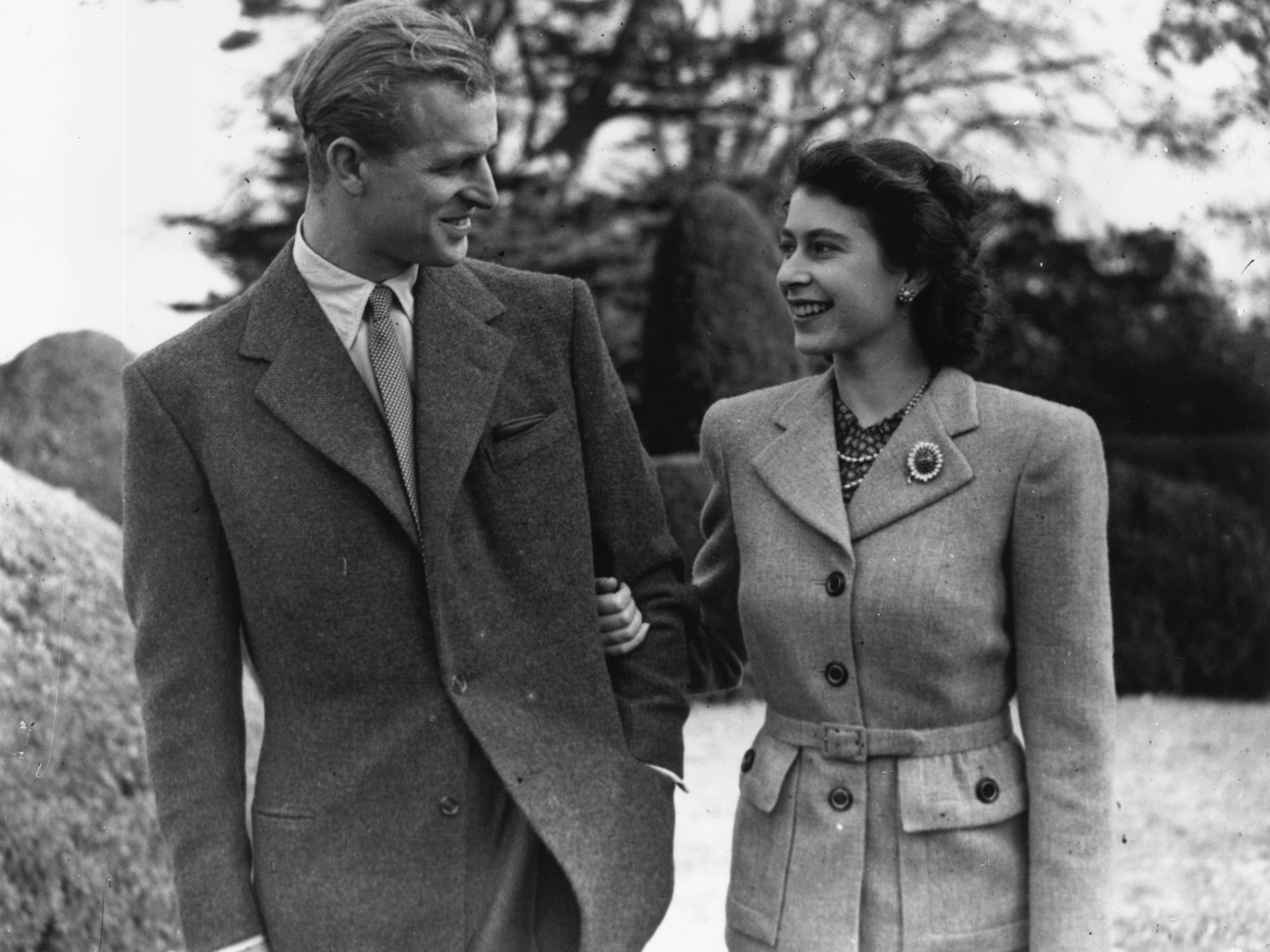 Topical Press Agency/Getty ImagesQueen Elizabeth and Prince Philip enjoying a walk during their honeymoon in November 1947.

In one of the most famous photos of the royal, Queen Elizabeth II was seen wearing a button-up coat and brooch while walking with Prince Philip on their honeymoon in 1947.

Queen Elizabeth also wore a matching camel cardigan and skirt to a horse-racing event in 1982. 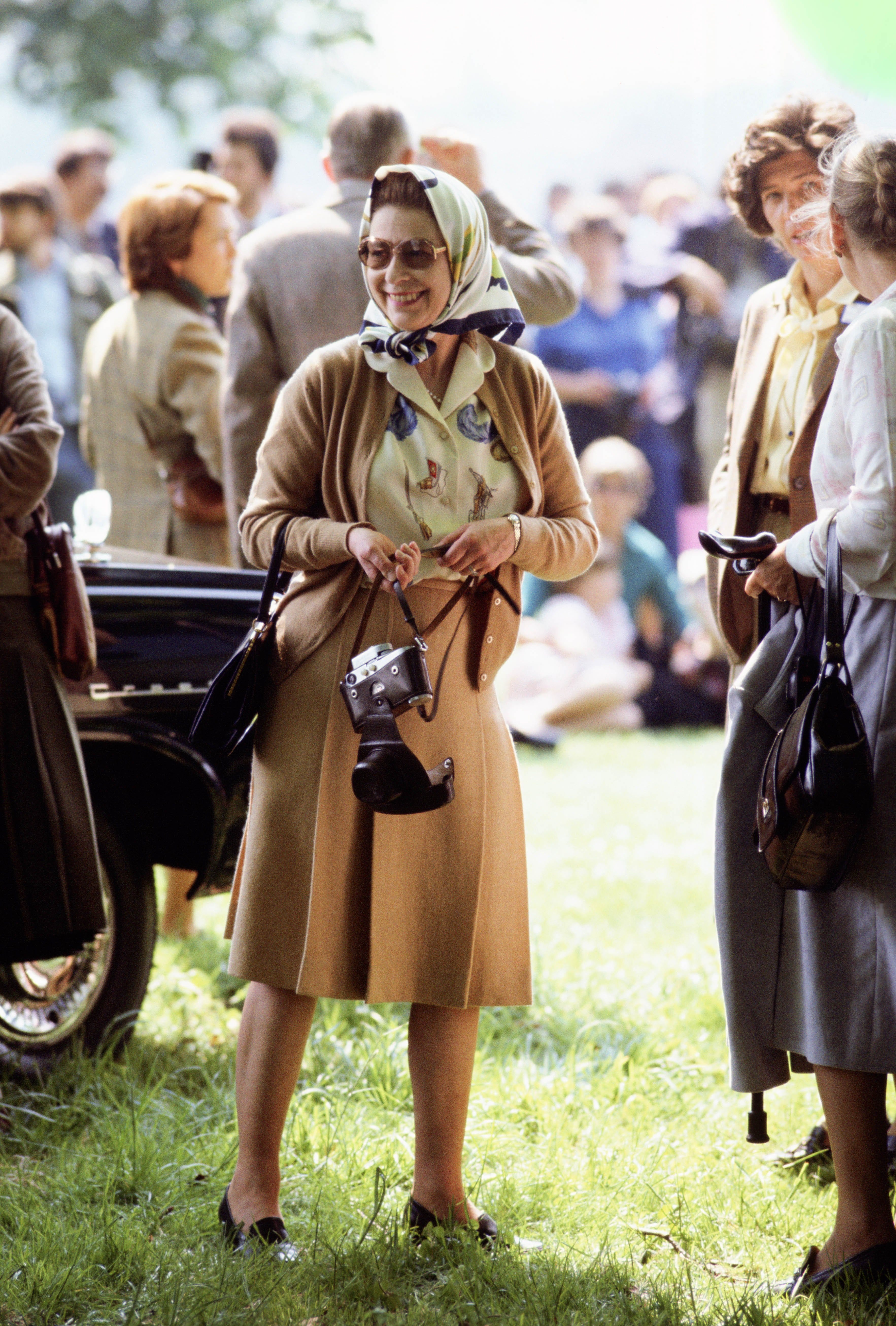 The Queen paired the look with a colourful printed blouse and a headscarf.

Queen Letizia of Spain is known for being one of the most fashionable royals, and this look from October 2015 is just one example of why. 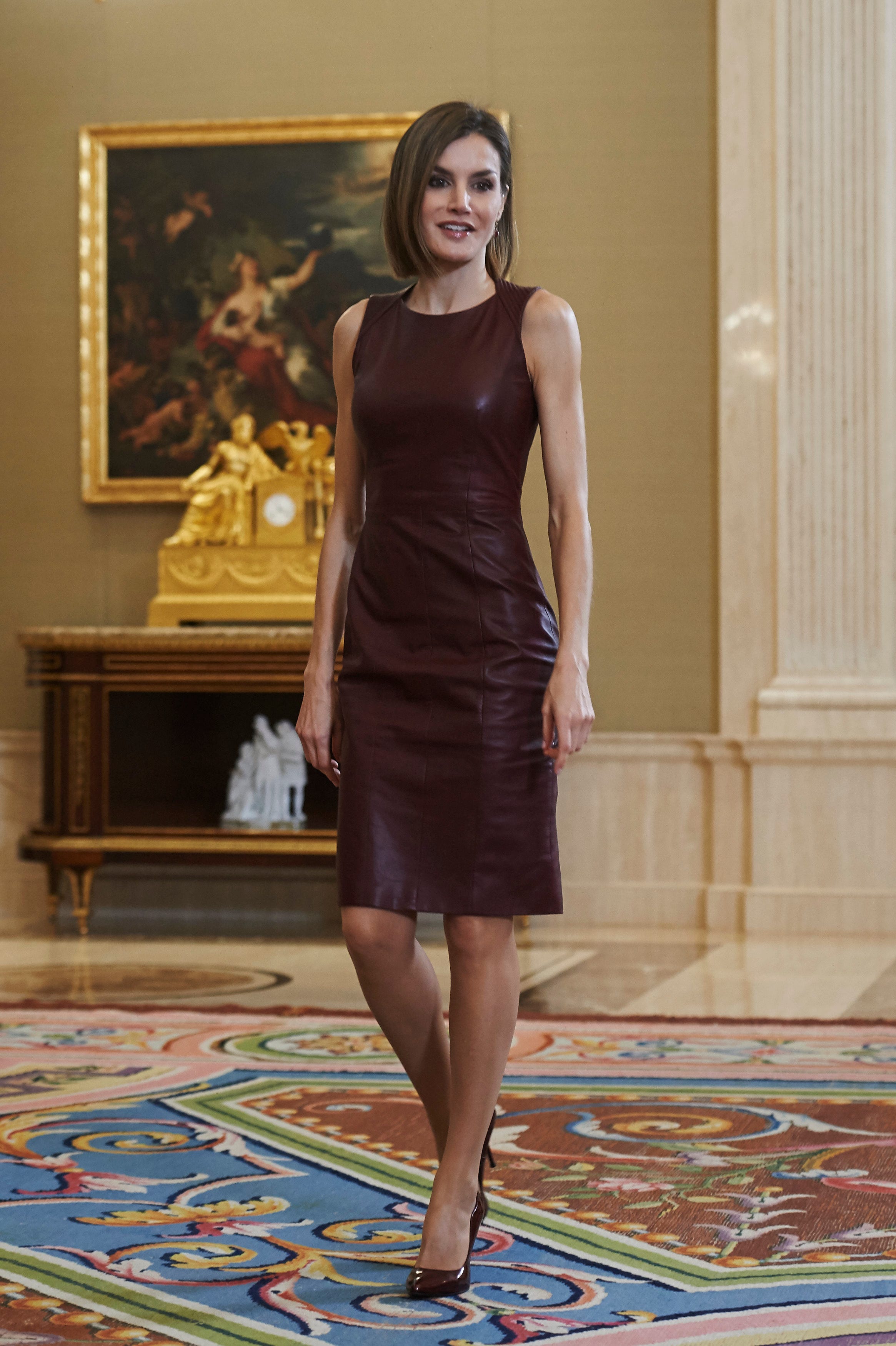 The stylish royal wore a burgundy lambskin dress by one of her favourite designers, Hugo Boss, to an event at Madrid’s La Zarzuela Palace.

Queen Letizia rocked a leather look once again in October 2018. 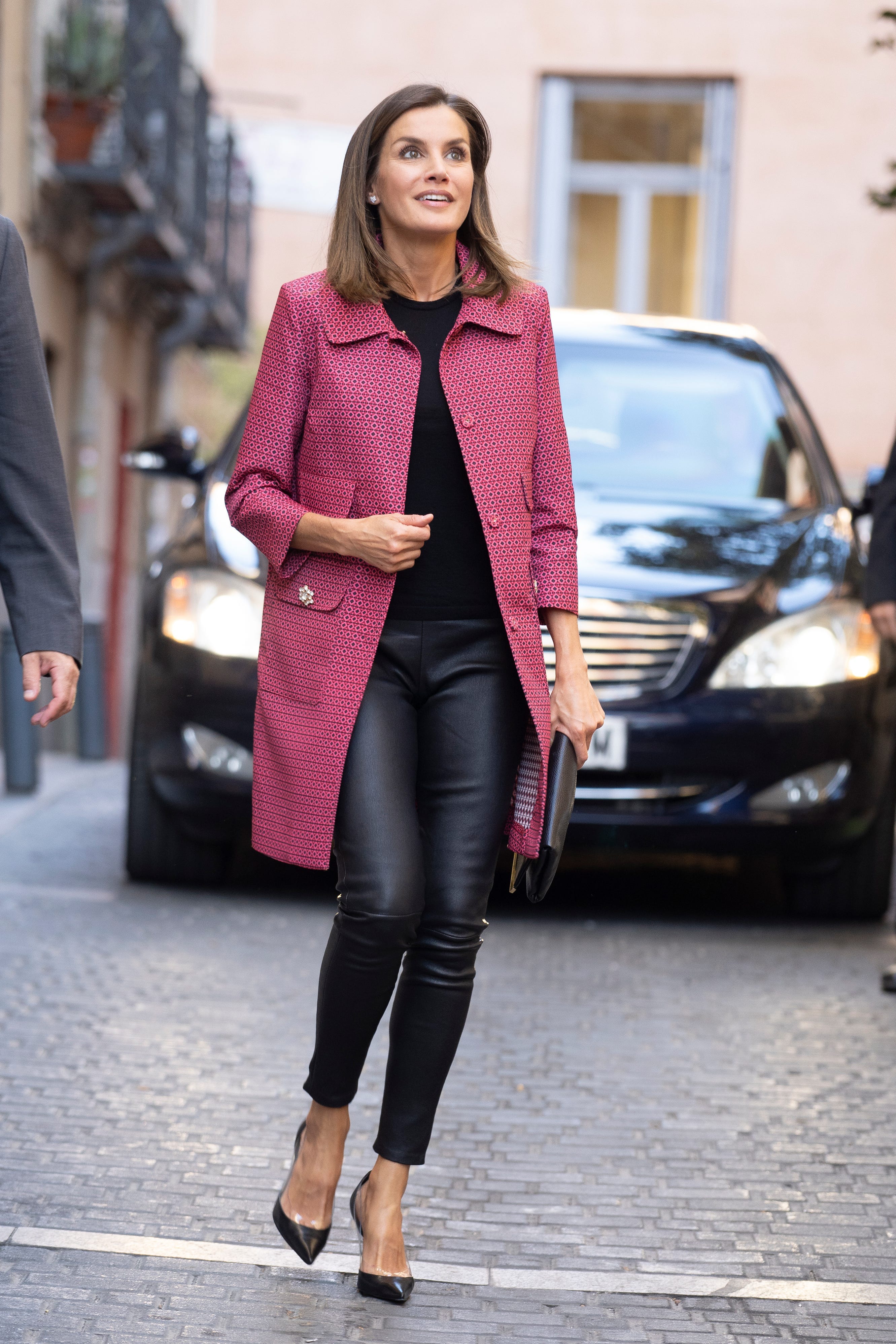 The royal paired leather pants with simple black pumps and a pink printed coat while attending a seminar in Spain.

Queen Letizia turned heads in a grey plaid skirt with an asymmetrical hemline at an event in October 2019. 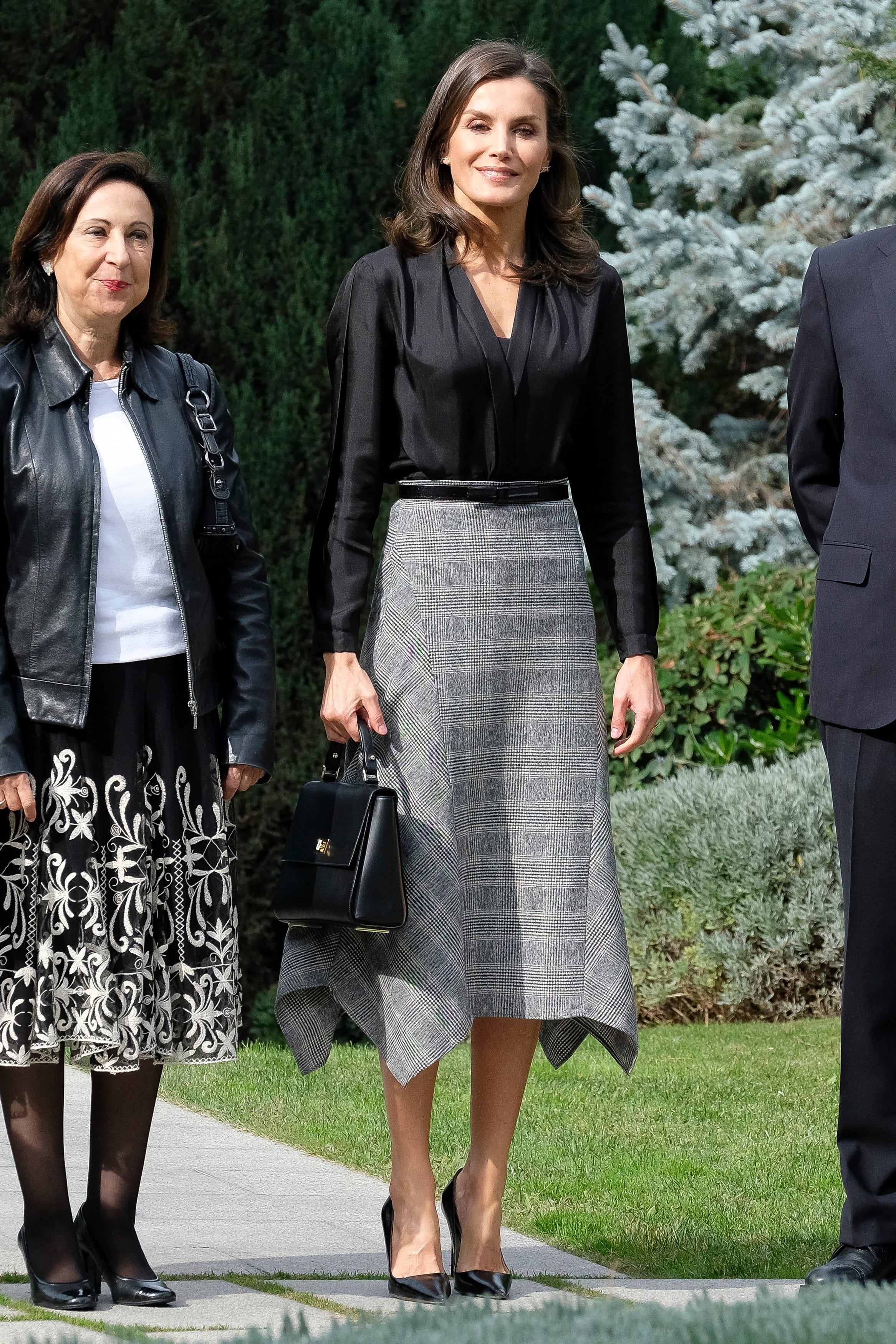 Plaid is one of this fall’s biggest trends, and the royal showed how to style it perfectly – with simple accessories and just a touch of leather.

Perhaps one of the boldest royal fall fashion looks on this list is from Queen Letizia. 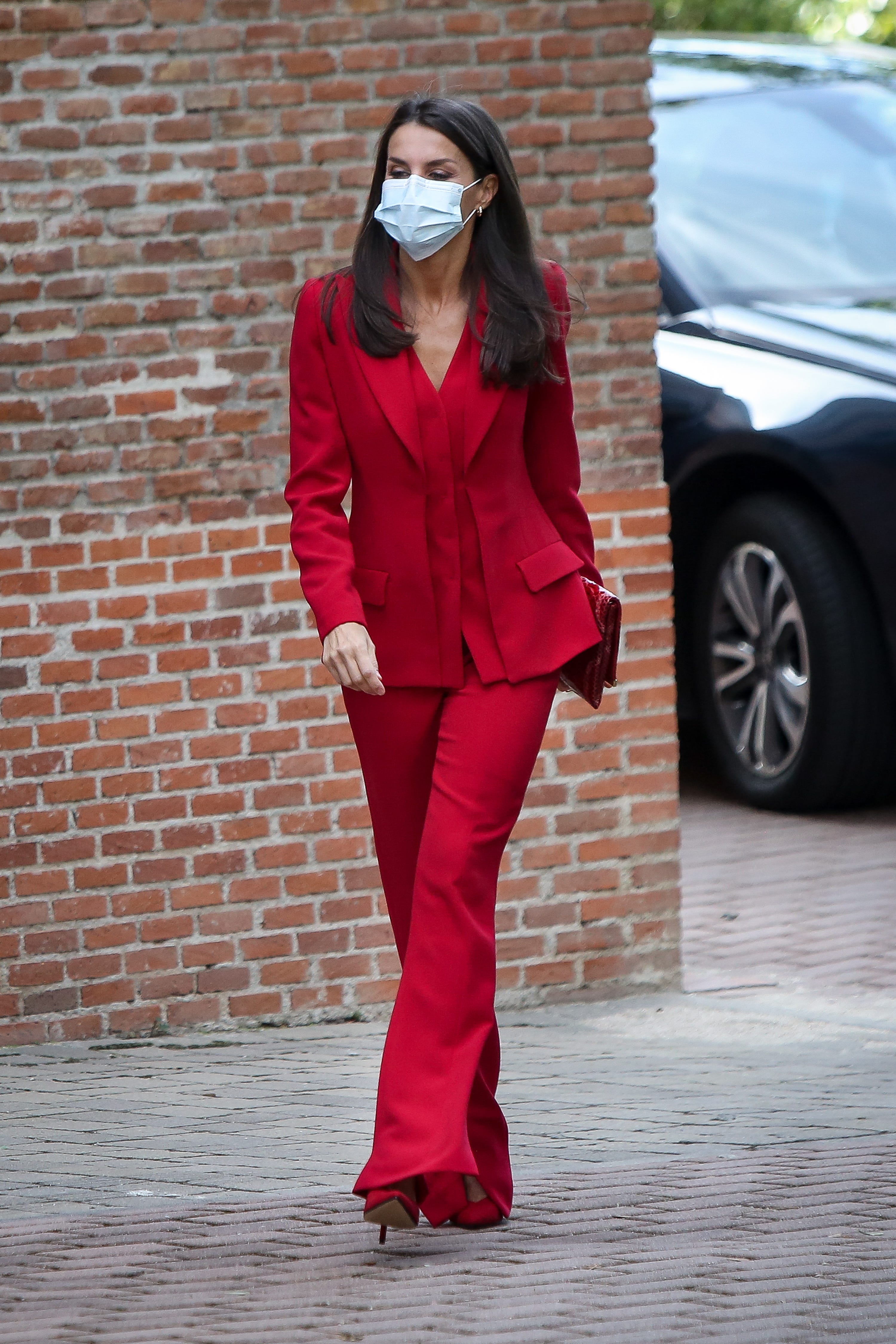 In October, the royal stepped out in a jaw-dropping red pantsuit with matching heels. While the dramatic look is perfect for the fall and holiday season, Letizia has also worn the suit, designed by Argentine designer Roberto Torretta, in the spring.