While the best laptops include all sorts of mobile computing devices that run on Windows 10, few of them hold a candle to Apple’s MacBook line in terms of support as well as software and hardware quality. However, there are several models available today, so which is the best MacBook?

The answer to that question entirely depends on your specific needs, but generally, the best MacBook for most people is the 2020 MacBook Air. It’s Apple’s cheapest laptop this year, but it doesn’t skimp on features or hardware quality to get there, offering the same display resolution and Touch ID fingerprint scanner as the 2020 13-inch MacBook Pro. It even gains the lauded Magic Keyboard upgrade first seen in the 16-inch model from 2019.

Of course, if you need a little more power, then we suggest the aforementioned MacBook Pro, which features quad-core Intel processor options – up from the dual-core chips inside the MacBook Air – as well as a brighter display with a wider colour gamut. We consider this model the minimum viable product for intensive tasks like photo editing.

Finally, for the utmost in power and versatility, there’s the brand-new 16-inch MacBook Pro released in late 2019. This model features a larger display than the 15.4-inch model without hugely increasing the laptop’s footprint. This laptop display has a much sharper resolution, six-to- eight-core Intel processors and dedicated AMD Radeon Pro graphics.

We also know that many people might have a tight budget but still would like a Mac, which tends to be more expensive. We recommend two models from 2017 that still offer a lot of bang for the buck.

The following are the best MacBooks you can buy. Why should you listen to me? I’ve worked in technology media for a decade now, more than half of which has been spent covering the mobile computing scene, particularly laptops and computing tablets. In that time, I’ve tested and reviewed hundreds of laptops and tablets running Microsoft Windows, Apple macOS, and Google Chrome OS. This testing has been both anecdotal as well as supported by benchmarks, some of which I have developed myself in the past. All told, I’ve spent more than half of my career obsessing over laptops big and small, cheap and chic, to determine which laptops are the right fit for all sorts of users.

Here are the best MacBooks you can buy:

Updated 6/4/2020: Added the 2020 MacBook Air and 13-inch MacBook Pro as recommendations within their categories and with links to our full reviews. Read on to see why they have been added. 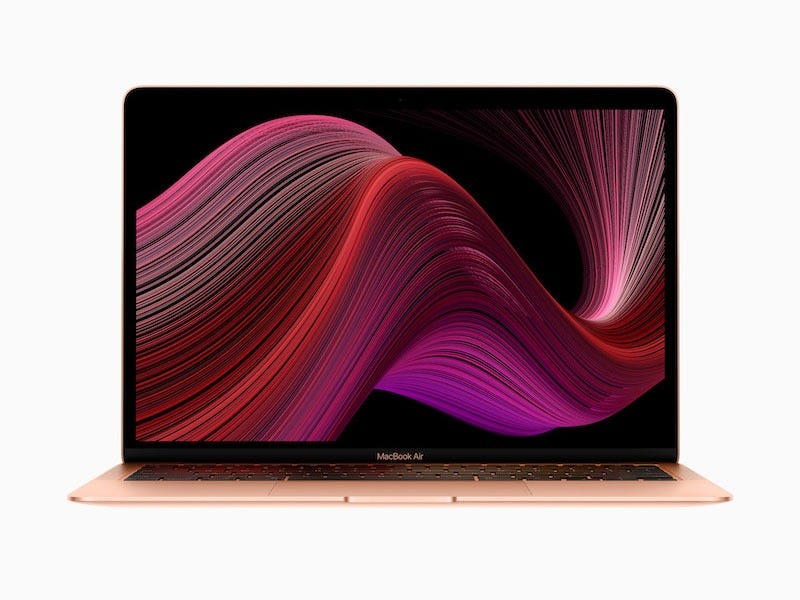 The latest MacBook Air for 2020 gains Apple’s new Magic Keyboard, twice as much storage to start, and Intel’s newest 10th-generation processors for under $US1,000, making it the best Apple laptop overall.

When the redesigned MacBook Air launched in 2018, it wasn’t exactly the affordable MacBook that the original model was known for, after it came out in 2008. However, following revisions in 2019 and now even more drastic changes for 2020, we’ve once again crowned the latest MacBook Air as the best Apple laptop for most people.

Again, this display is the very same within the more powerful (and more expensive) 13-inch MacBook Pro, with Apple’s True Tone technology that matches the colour gamut to the hue of light that surrounds it – a welcome feature for ease on the eyes while working.

In this year’s biggest new change, Apple has brought its improved Magic Keyboard to the MacBook Air line, doing away with the problematic Butterfly keyboard of recent generations past. This keyboard is both more comfortable and quieter than the 2019 model’s.

Finally, the MacBook Air continues to be Apple’s longest-lasting laptop, rated for up to 12 hours of wireless web browsing. This is the MacBook to best serve as your everyday companion for most tasks and forms of leisure short of gaming.

The 2020 MacBook Air still comes in Apple’s “Space Grey,” silver, and gold colours. At its starting price, it includes all of the above, powered by an 10th-generation, fanless dual-core Intel Core i3 processor (CPU), 8GB of memory (RAM) and a now-larger 256GB solid-state drive (SSD). Apple offers the 2020 MacBook Air with upgraded components, but that will drive up the price steeply and quickly. Tech Insider’s Lisa Eadicicco does suggest considering the substantial power upgrade from the dual-core Intel Core i3 to quad-core Core i5 model.

We should add that fanless CPUs are generally less powerful than fan-cooled ones, and there’s little reason for the 2020 MBA to be fanless when the 2017 one was fan-cooled.

Cons: Base model feels underpowered, no flexibility when it comes to ports 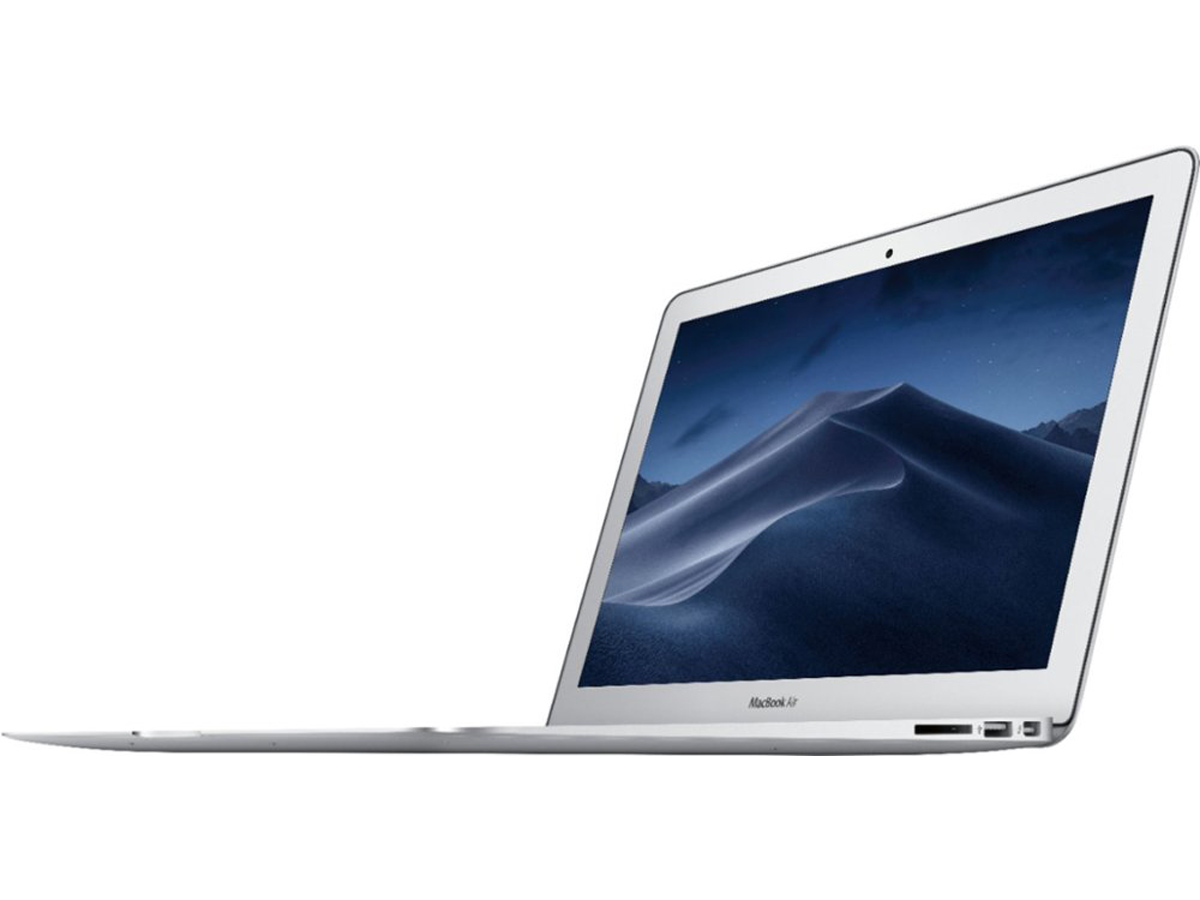 If you’re on a tight budget, the 2017 MacBook Air is a good buy and still plenty powerful for most casual users.

Don’t let the age fool you: For those who want to save the absolute most money on a new, sealed-in-box MacBook, the 2017 MacBook Air is still a decent machine nearly three years out. That alone should be a testament to Apple’s hardware pedigree.

Now, those buying one of these laptops need to level their expectations a little: This is an Apple laptop that nails the basic and little else. For instance, the 2017 MacBook Air is based on the original design, so it comes with a display that’s just 1,440 x 900 pixels surrounded by rather thick bezels.

The laptop comes in just one colour – silver – but it also features more ports than its successor (albeit slower ones): two USB 3 ports, a Thunderbolt 2 port, and a full-sized SD card slot. It does support the latest 802.11ac Wi-Fi standard, however, and its battery lasts just as long as the newest model: 12 hours of web browsing over Wi-Fi. And, this is the last new MacBook you can buy that features the illuminated Apple logo on the lid.

The starting configuration of the 2017 MacBook Air comes with a dual-core, fan-cooled fifth-generation Intel Core i5 CPU, 8GB of RAM, and a 128GB solid-state drive SSD. There is also an “upgraded” version with a faster CPU (fifth-gen Core i7) and more storage (512GB) that you can buy.

Note that Apple no longer sells this directly, but you can still find it from official Apple resellers.

The best MacBook for portability

If mobility is the absolute most important thing for you in an Apple laptop, then we’d have to recommend the 12-inch MacBook. Discontinued in 2017, you’ll have to buy one either refurbished or new from a third-party retailer, but it’s the smallest and lightest modern MacBook Apple has produced since the 11-inch MacBook Air.

The laptop is quite a bit like the 13-inch 2019 MacBook Air’s design, which basically rendered the MacBook obsolete in every way but size and weight. Also like the newest MacBook Air, this laptop uses fanless Intel Core CPUs – but it has more base SSD storage.

This version of Apple’s MacBook was the start of bringing ultra-sharp displays to its general-use laptops, with the 12-inch MacBook sporting a 2,304 x 1,440 resolution at 226 pixels per inch. However, this laptop was also widely derided for featuring just a single USB-C 3.1 (USB-C) port, so a hub with extra ports will be essential for most users. Note that the USB-C port doesn’t support Thunderbolt, so you can’t charge high-power peripherals or other power-hungry connections, like two 4K monitors.

The 12-inch MacBook is available in silver, Space Grey, gold or Apple’s Rose Gold. The base configuration comes with a dual-core, fanless seventh-generation Intel Core m3 CPU, 8GB of RAM, and a 256GB SSD. From there, you can get it with a fanless Core i5 as well as double the amount of RAM and storage. As we noted about the 2019 MacBook Air, fanless CPUs are generally less powerful. 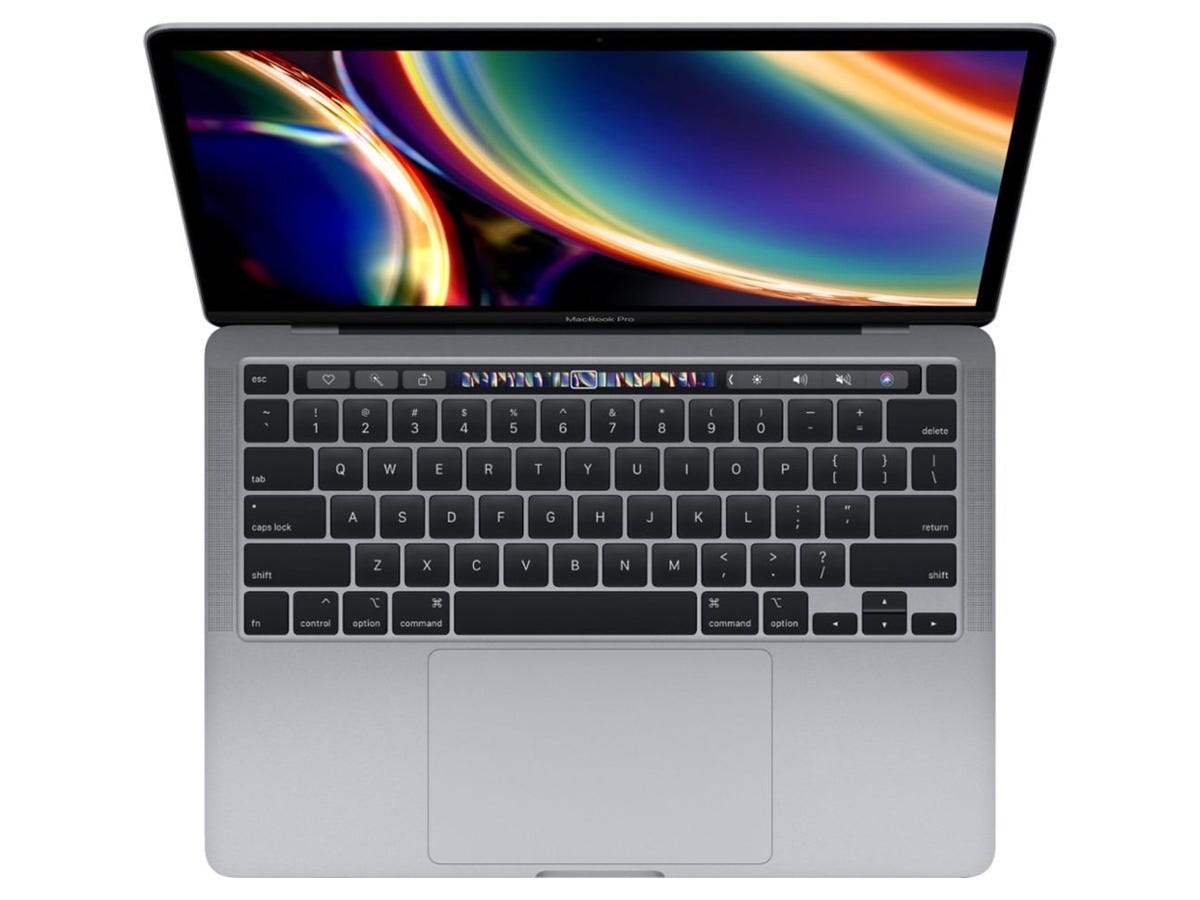 For anyone that needs as much power as Apple is willing to cram within a 13-inch laptop, the MacBook Pro is the only option.

Equipped with powerful Intel CPUs and Apple’s Touch Bar, and not weighing much more than the latest MacBook Air, the 13-inch MacBook Pro delivers an overall capable and mobile MacBook for creative professionals and power-hungry general users alike.

As we’ve said before, this MacBook Pro has the same display found in the latest MacBook Air, replete with the same True Tone technology and a whopping 500 nits of maximum brightness. Improving upon last year’s revision that saw all versions gain the Touch Bar plus Touch ID for fast biometric login, Apple has now brought the Magic Keyboard to this model as well, making for a more comfortable, quiet, and reliable typing experience than before.

What’s perhaps most important about the 13-inch MacBook Pro in comparison to the other MacBooks above is that it features a range of full-fat, fan-cooled Intel Core-series CPUs. Every CPU option within this laptop is quad-core, with clock speeds reaching 4.5GHz for some; because of this, these CPUs require fan cooling just like desktop CPUs do, hence what’s meant by full-fat. These processors are what you want for tasks like video and photo editing or particularly intense spreadsheet applications. It should be known, though, that the entry-level MacBook Pro offers just an 8th-generation Intel Core i5 CPU, not one of the latest 10-generation models that even the above MacBook Air manages to. You have to pay at least $US1,799.00 for one of those CPUs.

Of course, battery life takes a hit here in exchange for power, to the tune of 2 hours for a total of 10.

Cons: Older processors in the base model

For those who demand the most power out of a MacBook, consider nothing less than the flagship 16-inch MacBook Pro.

The end of 2019 brought us the first entirely new MacBook Pro since 2016: a 16-inch version that replaces the long-standing 15.4-inch model. However, the newer model delivers a larger display within roughly the same laptop frame as the 15.4-inch, thanks to smaller display bezels.

Better yet, this version does away with the divisive butterfly key hinges found within the keyboard of every aforementioned MacBook on this list – save for the 2017 MacBook Air. Now dubbed the Magic Keyboard, it uses traditional scissor switches refined by Apple for stronger response and quieter typing.

This keyboard also makes a meaningful update to Apple’s Touch Bar, narrowing it a bit to make room for a defined, physical Escape key and separating the Touch ID sensor from the Touch Bar enclosure. All told, this makes it clear that Apple is listening to customer feedback – even if it takes a long time for the company to respond.

Cons: Hefty upgrade prices, Not many ports for the size 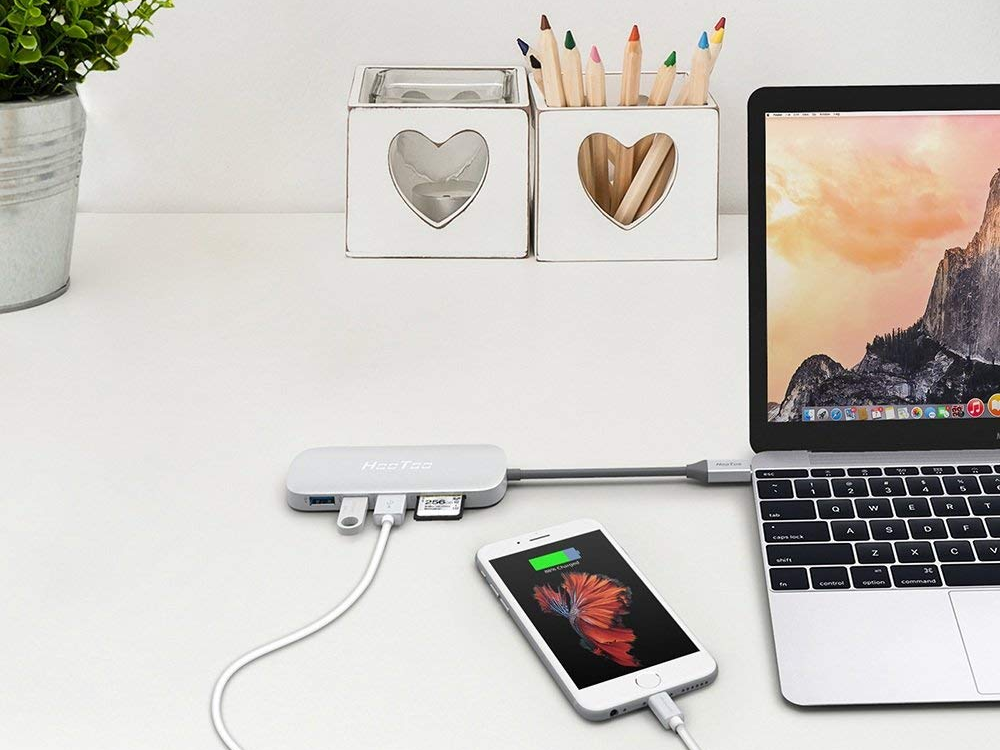 The best USB-C hubs you can buy

If you have just bought a MacBook with only one or two USB-C ports, you need a USB-C hub with lots of ports to expand your connectivity options. Here are the best USB-C hubs you can buy: