2 of the Hamptons' best lobster rolls are served right across the highway from each other, and the best one comes with bigger chunks of meat 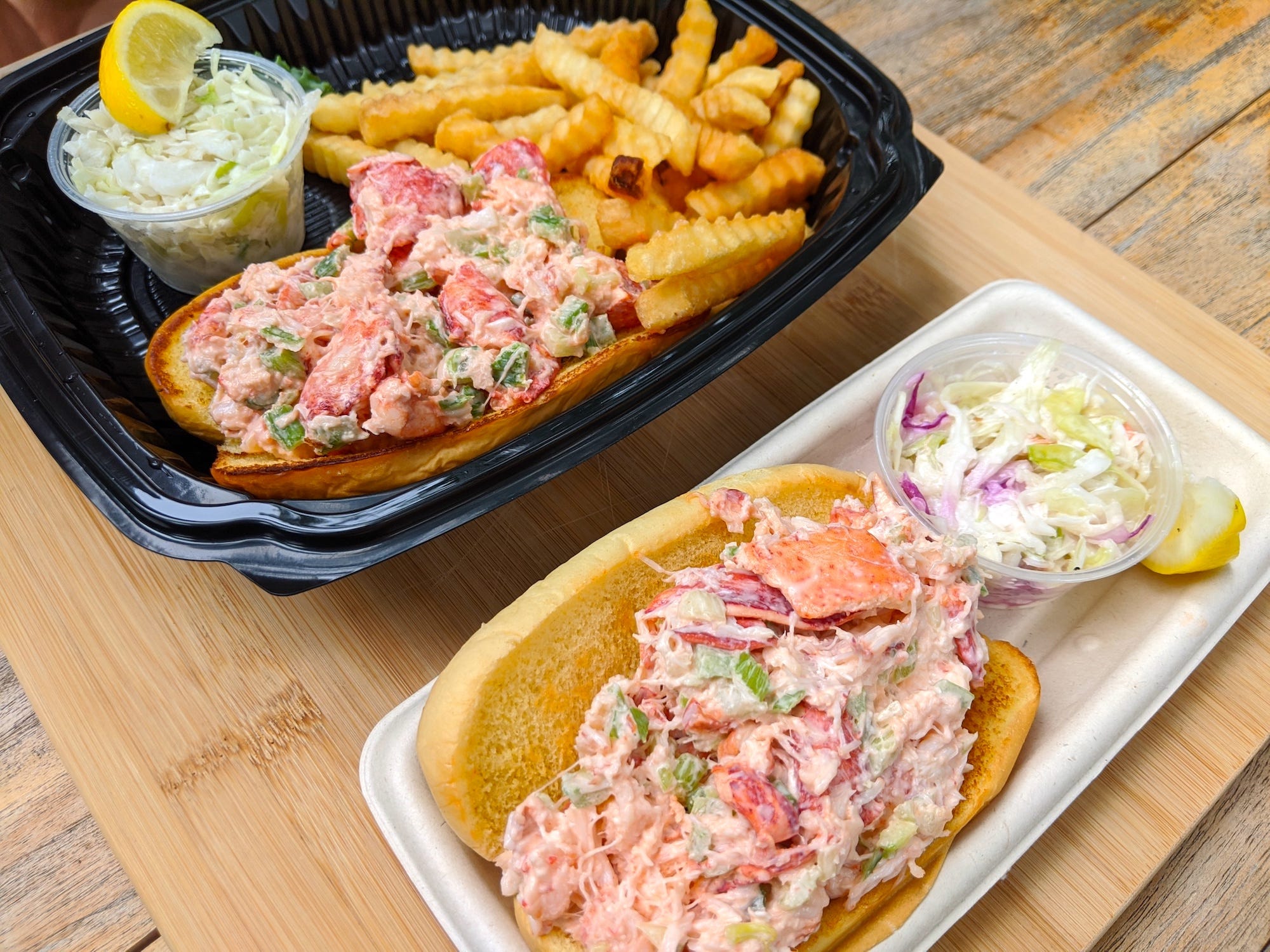 Sophie-Claire HoellerThe Lobster Roll on the left, Clam Bar on the right.

Roadside seafood shacks are a Hamptons staple, and no two are more iconic than Clam Bar and The Lobster Roll.

The Lobster Roll – which is also affectionately known as Lunch, for the eponymous retro sign that welcomes visitors outside – has been open since 1965, while Clam Bar opened in 1981.

The two have been serving lobster rolls mere feet away from each other, on either side of Montauk Highway in Amagansett, New York, for almost 40 years.

Locals are divided on which is the best; the spot you frequent is telling, and it’s rare to switch your regular haunt.

So, we put the two lobster rolls to the test by trying them side by side.

The Lobster Roll oozes Americana with its patriotic red, white, and blue awning. It features a beautiful, plant-covered outdoor patio that makes you forget just how close to the highway you’re sitting. 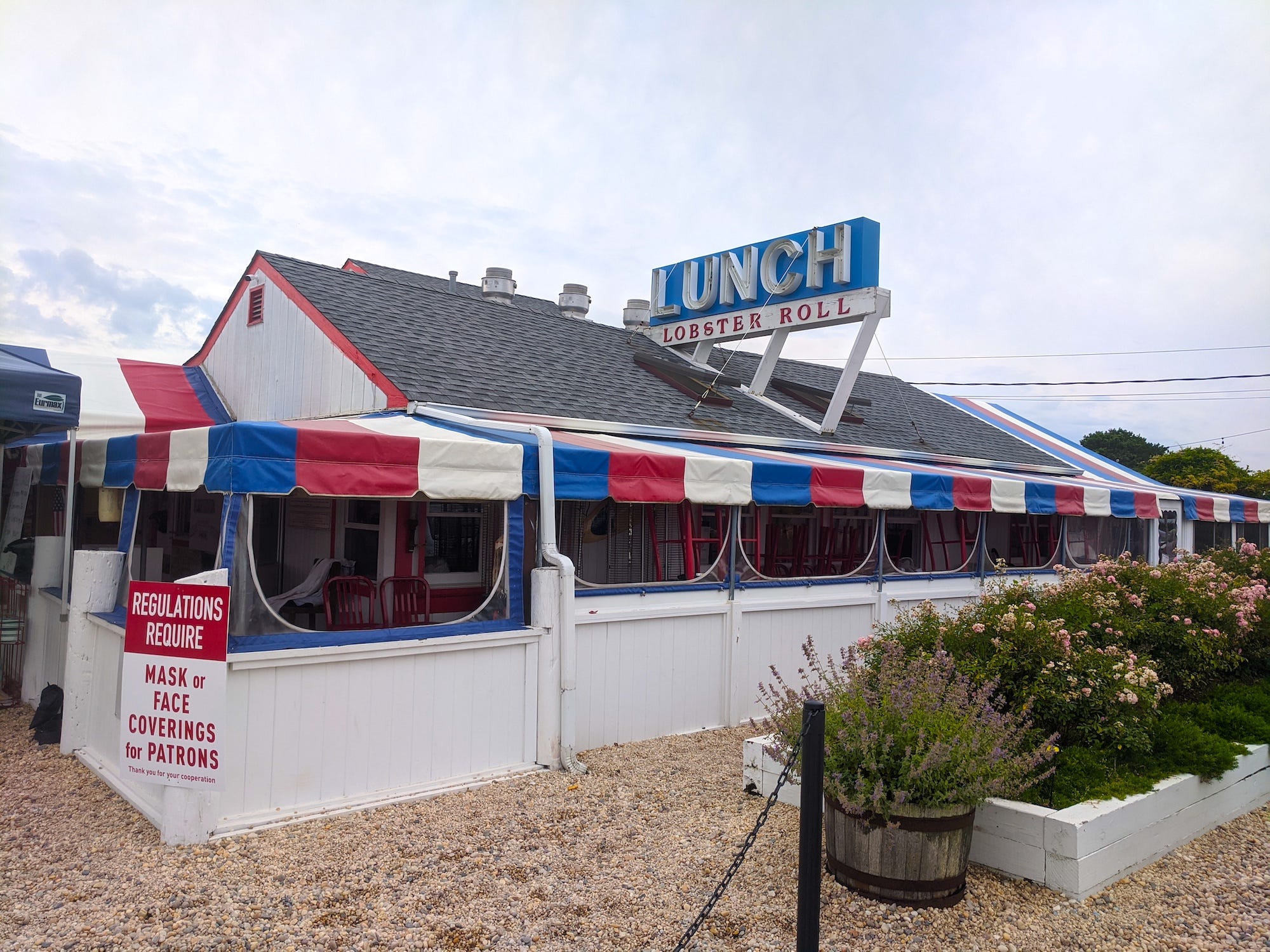 You might recognise The Lobster Roll from Showtime series “The Affair,” where the spot featured prominently as one of the main characters’ workplace. Paper placemats brag about the show and the dozens of celebrities that have reportedly dined there. 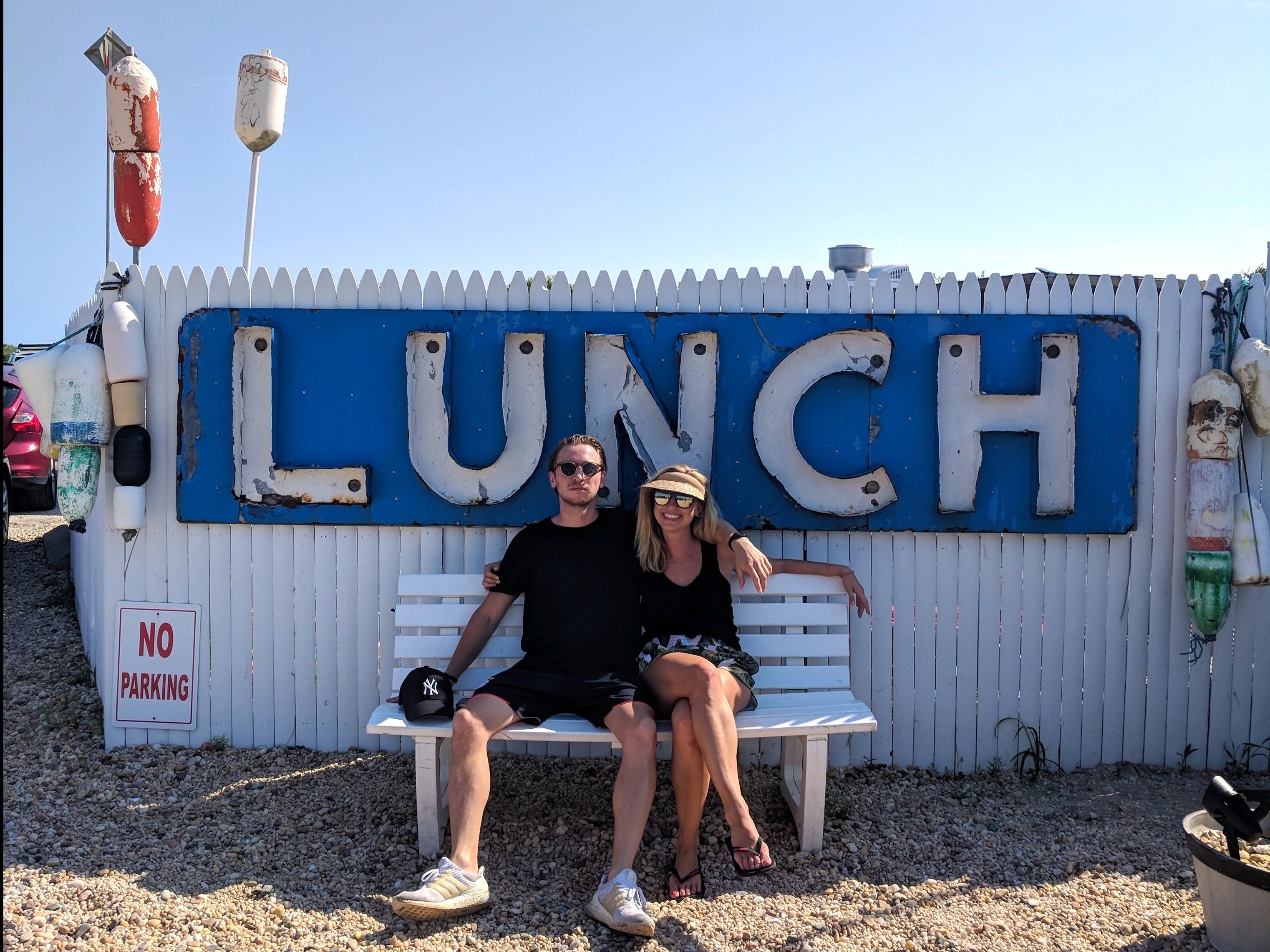 Sophie-Claire HoellerMy brother and I pose in front of the original, iconic sign in 2019.

Clam Bar is a lot more low-key and describes itself on its website as “roadside rustic” with a “no-frills ambiance.” It has outdoor dining only, at plastic tables in the shade of yellow-and-white umbrellas. 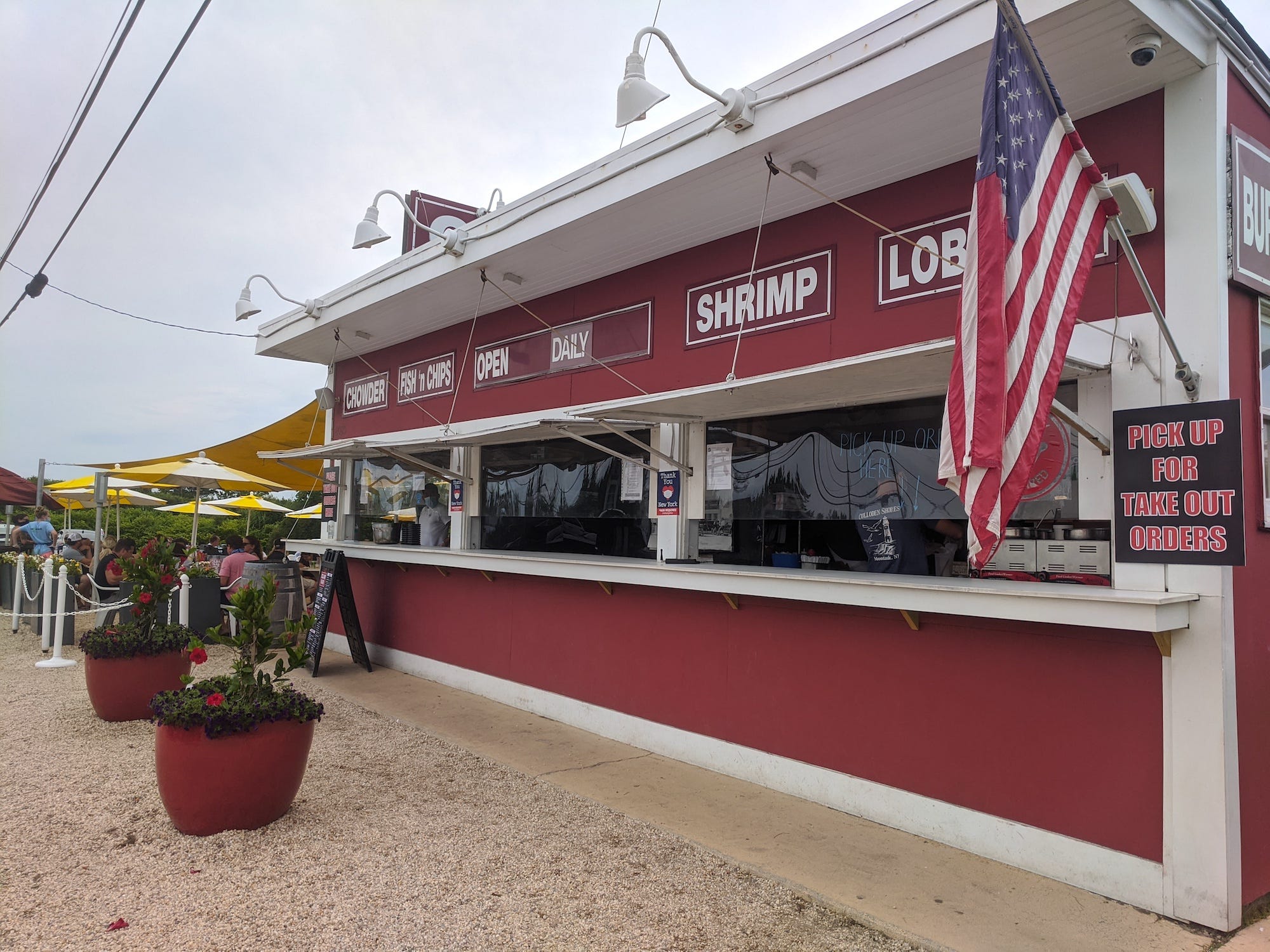 Sophie-Claire HoellerClam Bar doesn’t have any interior seating and is open during the summer only.

The Lobster Roll is often credited with inventing the cold lobster roll, known as a lobster salad roll. It describes its version as “100% pure, cold-water lobster meat mixed with the finest mayonnaise and just enough celery for texture.” 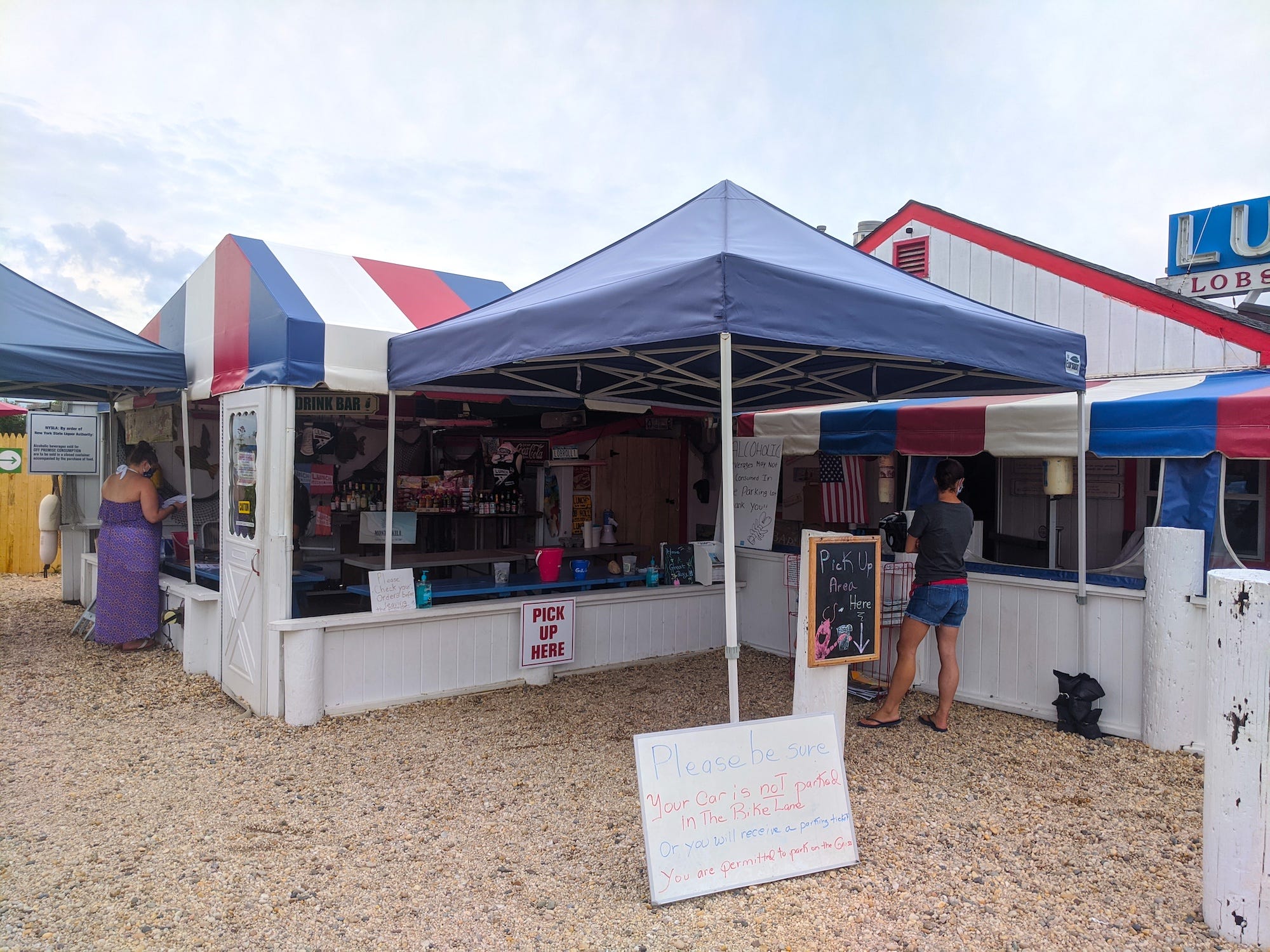 Sophie-Claire HoellerThe Lobster Roll now has outdoor pickup, due to the coronavirus pandemic.

Clam Bar, which describes its locally sourced lobster as having been “at the bottom of the ocean two hours before you ate it,” says that its lobster salad roll has only three ingredients: lobster, mayonnaise, and celery. 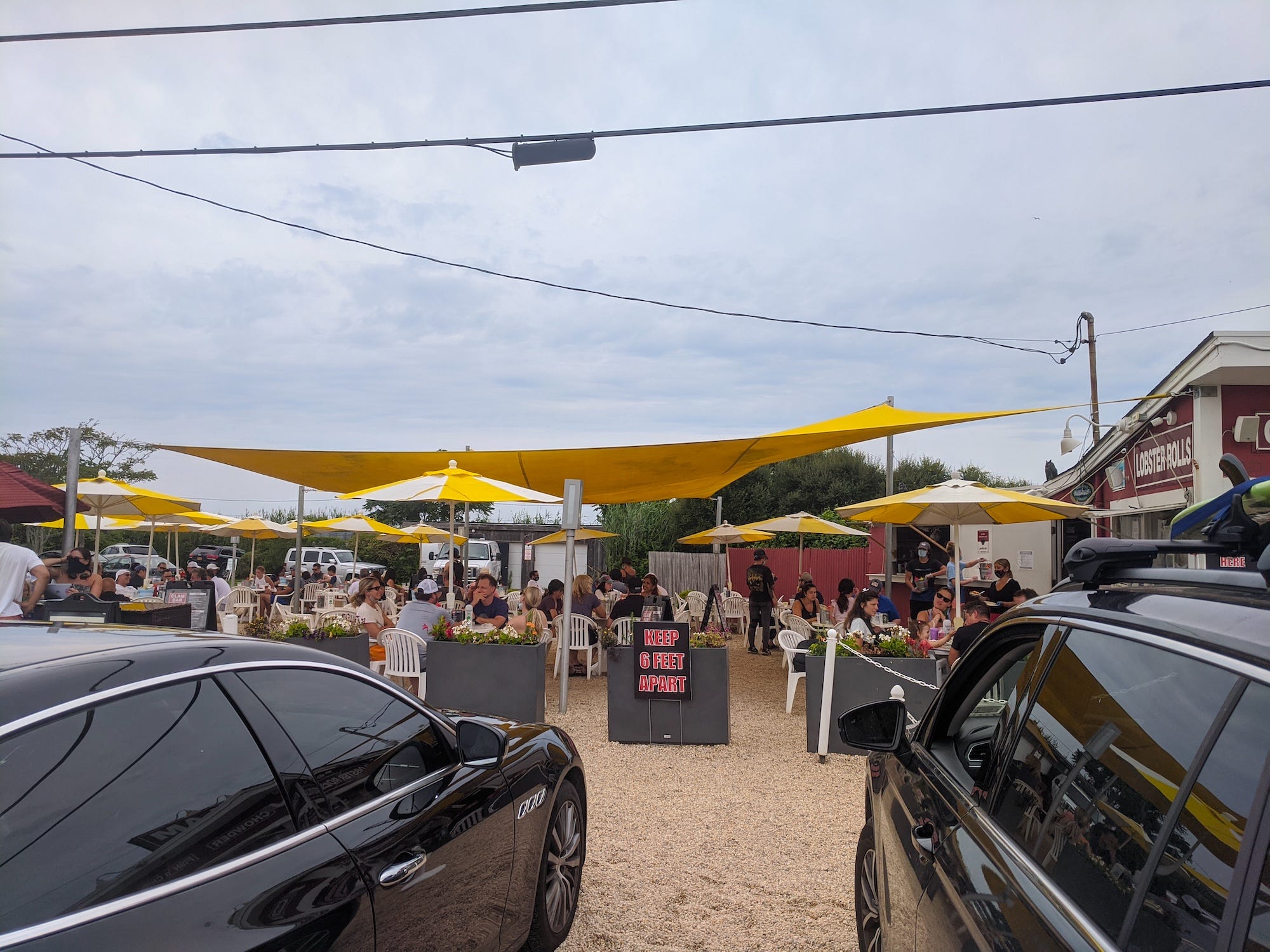 We ordered a lobster salad roll at each place (online at Clam Bar, and by phone at The Lobster Roll), swinging by both to pick them up 20 minutes later to eat at home. 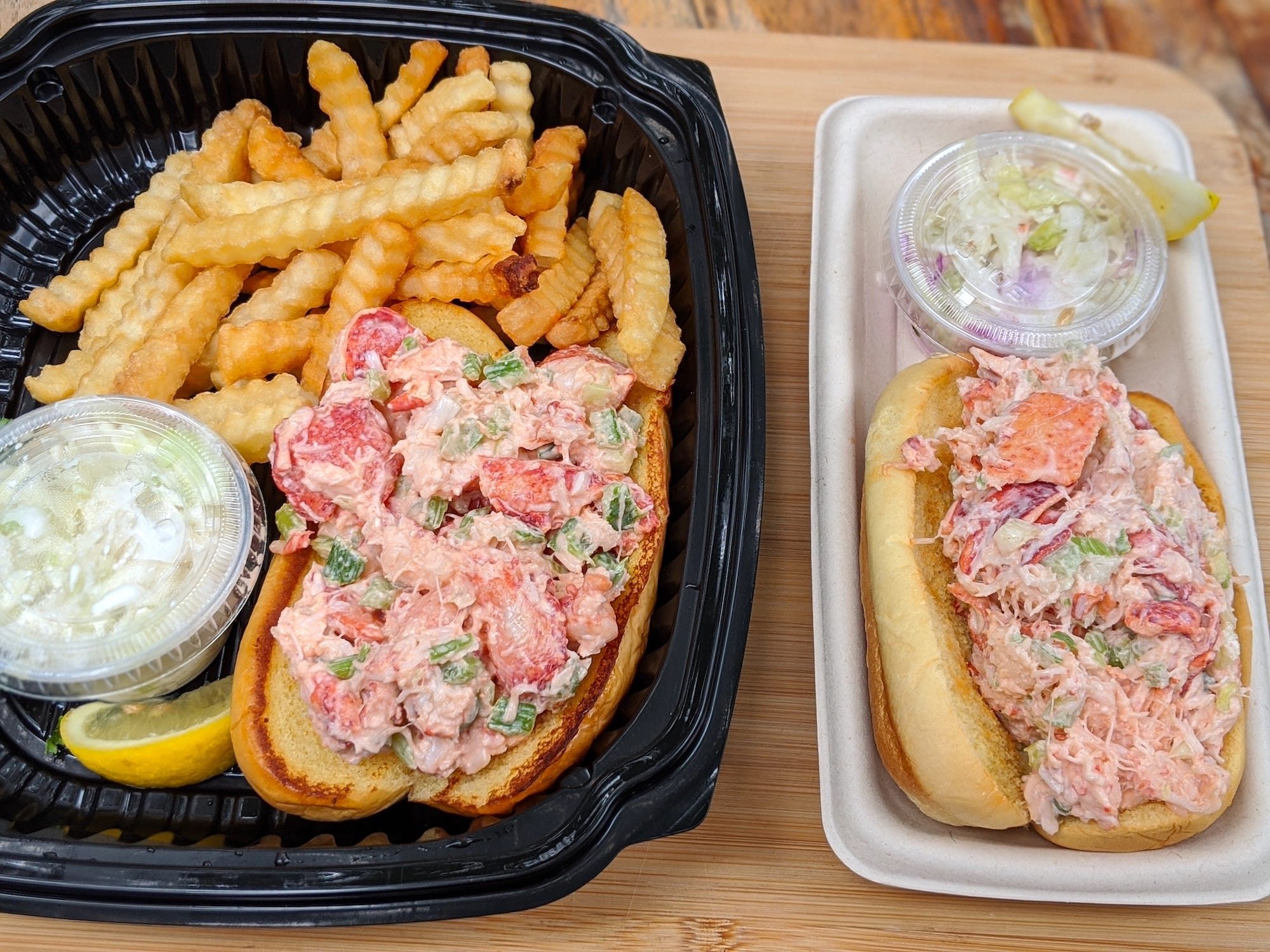 Sophie-Claire HoellerWith fries, they each cost $US30. 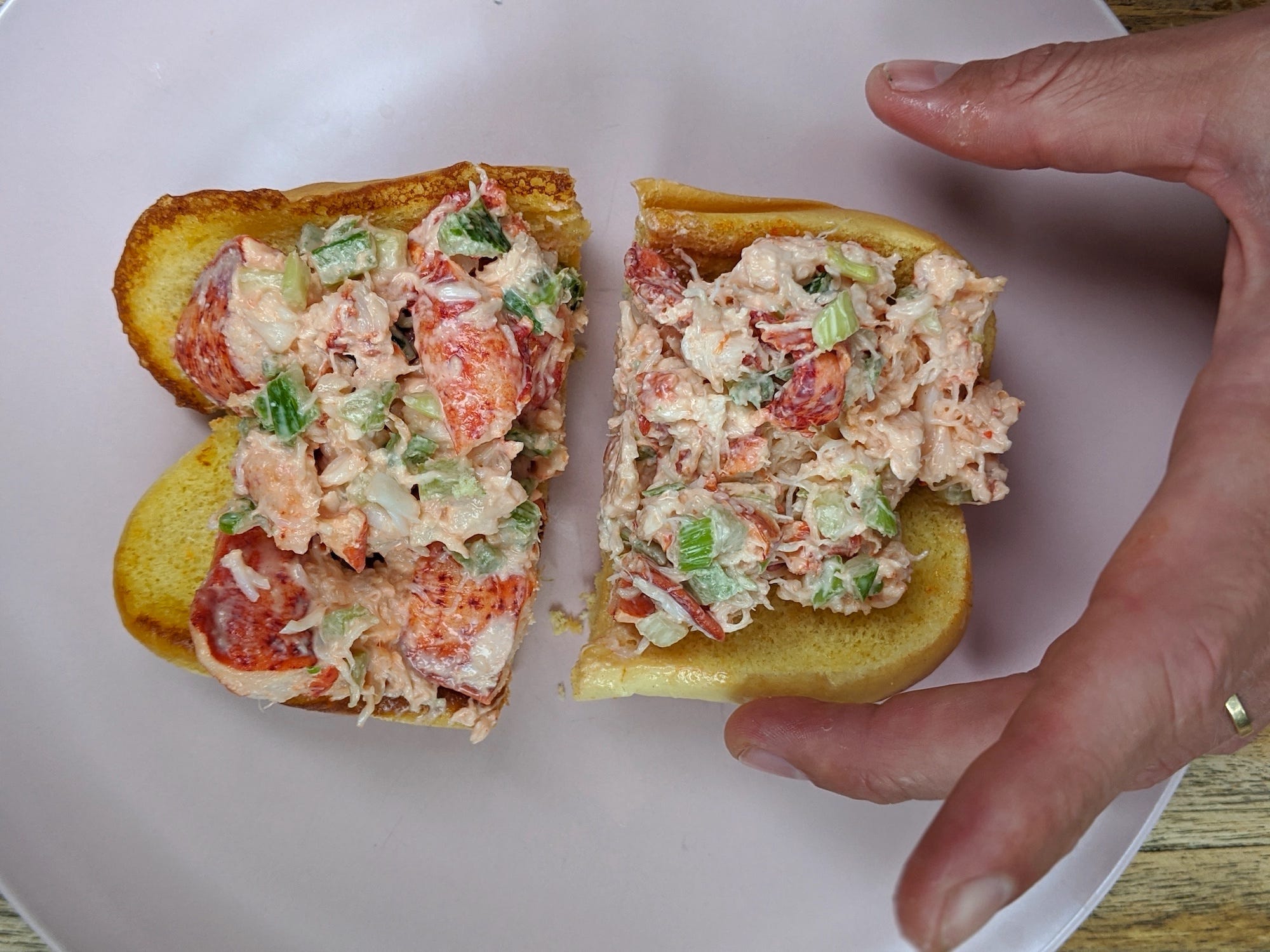 Sophie-Claire HoellerThey both had generous amounts of lobster (Lobster Roll is on the left, Clam Bar on the right).

Both come on a toasted potato roll and with a side of coleslaw. 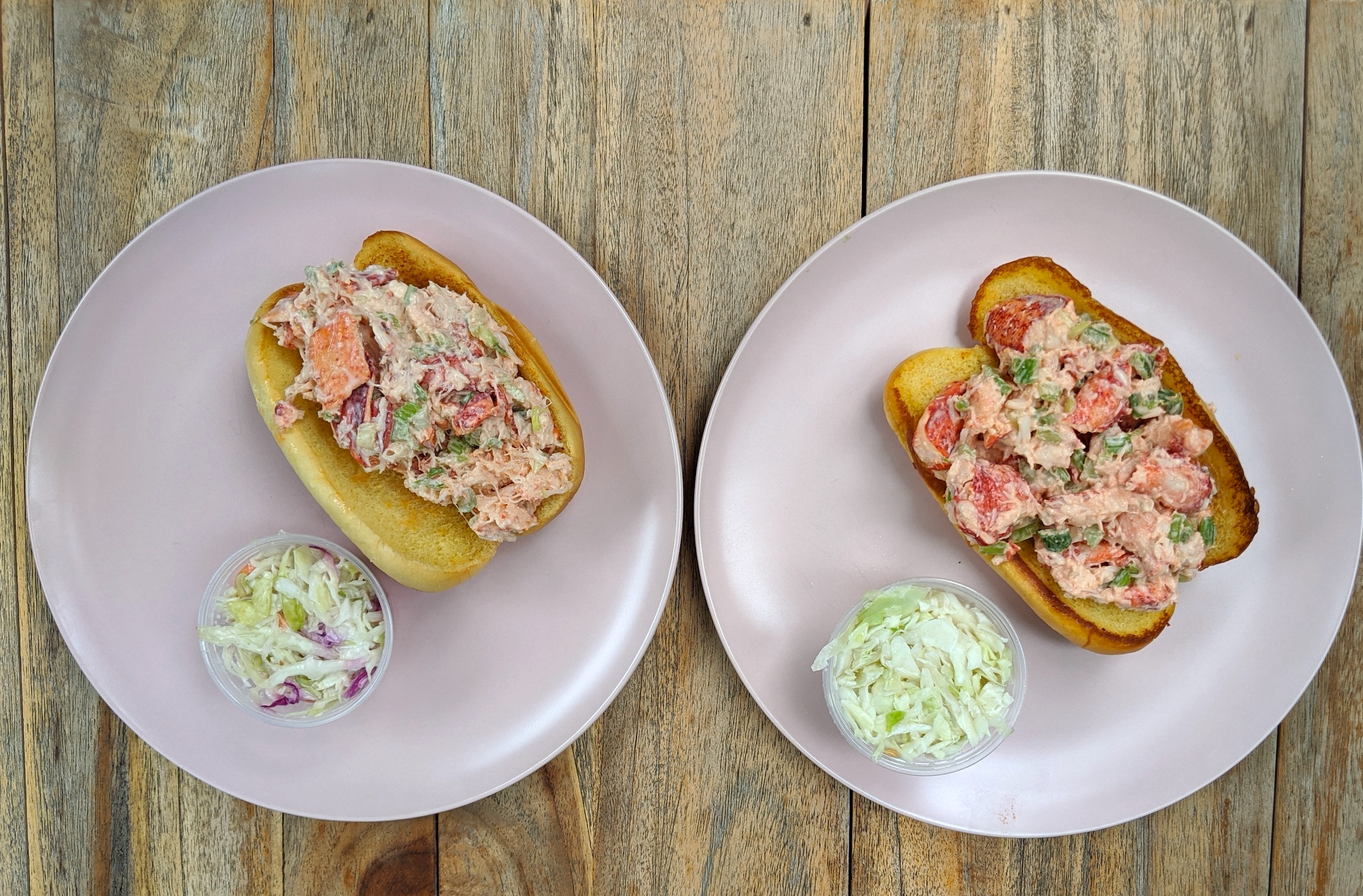 Sophie-Claire HoellerLobster Roll’s roll, on the right, has more celery, and a more toasted bun.

The first thing we noticed was that the roll from The Lobster Roll had bigger chunks of meat, more celery, and a more red hue. Its bun was also more toasted than that of Clam Bar. 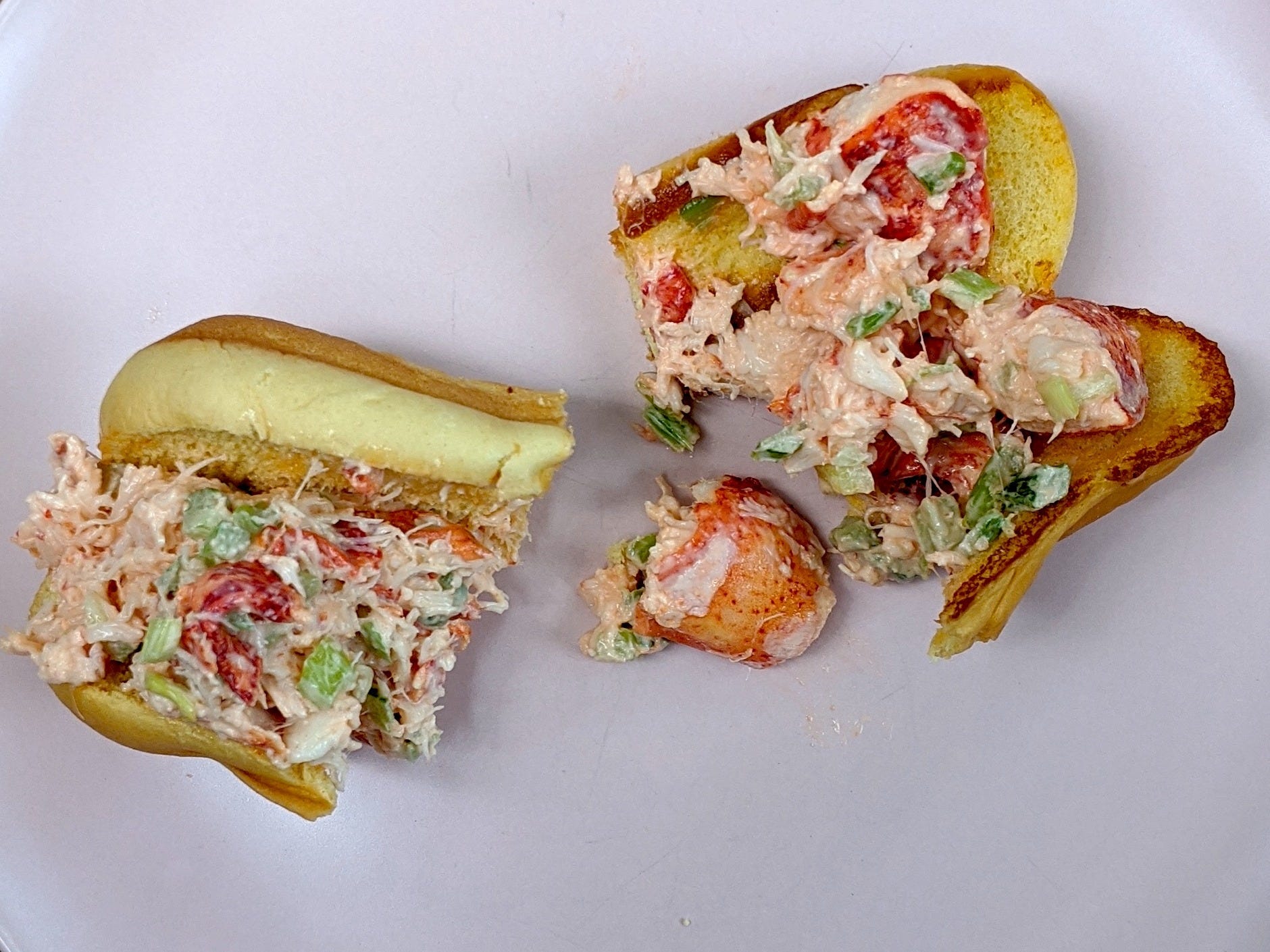 Sophie-Claire HoellerLobster Roll on the right, Clam Bar on the left, after we took a bite out of each.

The coleslaw at The Lobster Roll was monotone: At Clam Bar, the coleslaw had purple cabbage and shredded carrot mixed in.

Sophie-Claire HoellerThey both come with coleslaw and a lemon slice.

Both my husband, who helped me with this taste test, and I preferred the coleslaw at The Lobster Roll, which was creamy and sweet. Its recipe definitely includes sugar. 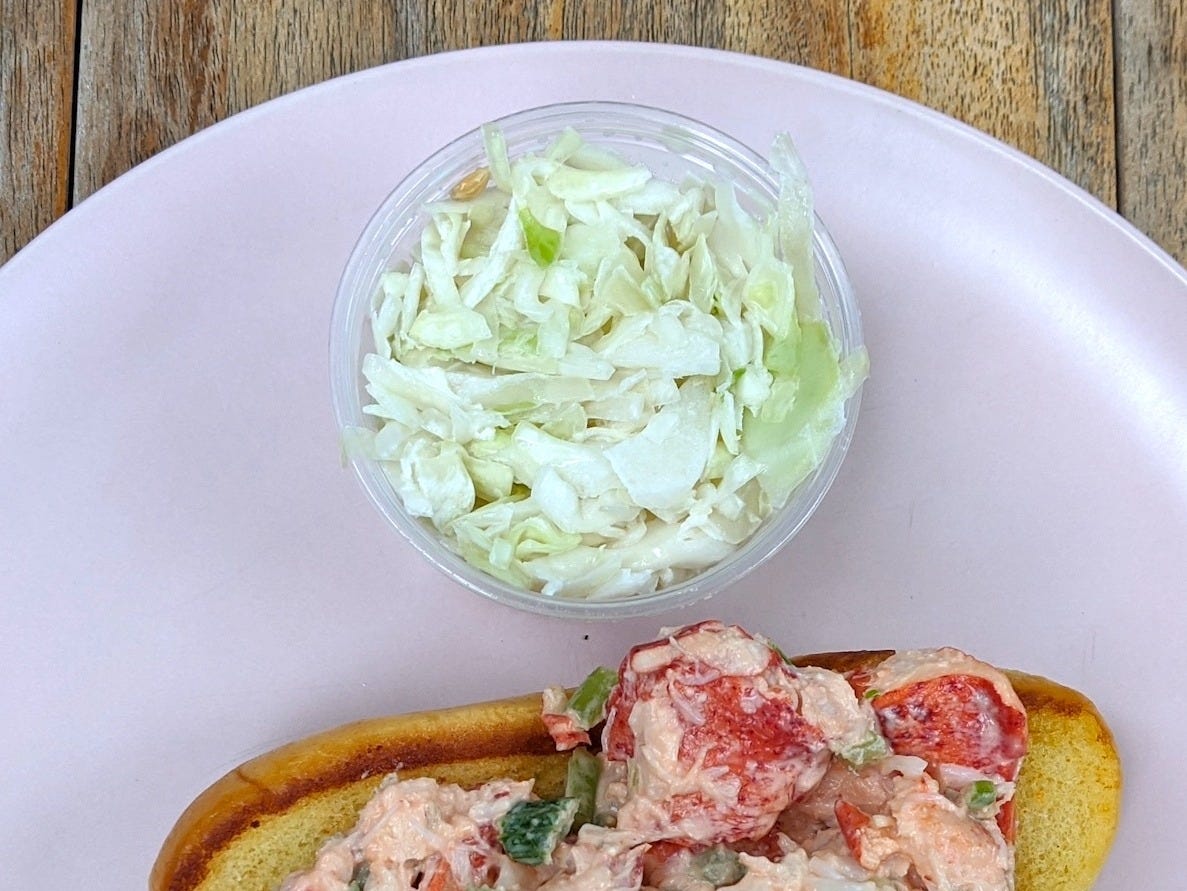 We found that the coleslaw at Clam Bar was a little more vinegary and tangy. Though lighter and more refreshing, I like my coleslaw creamy and heavy, like the one at The Lobster Roll. 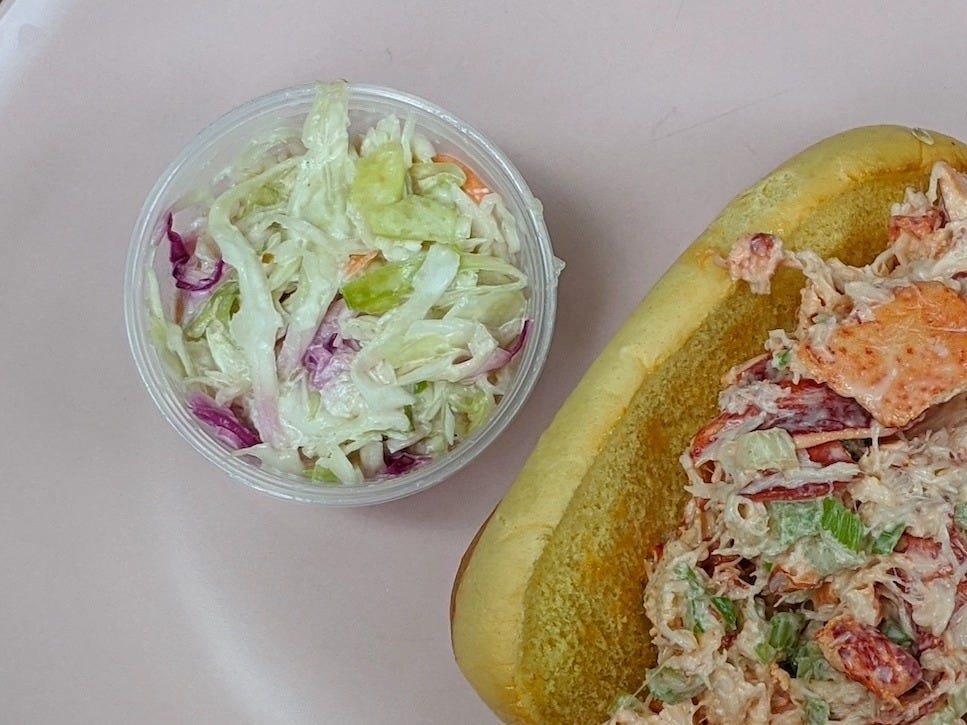 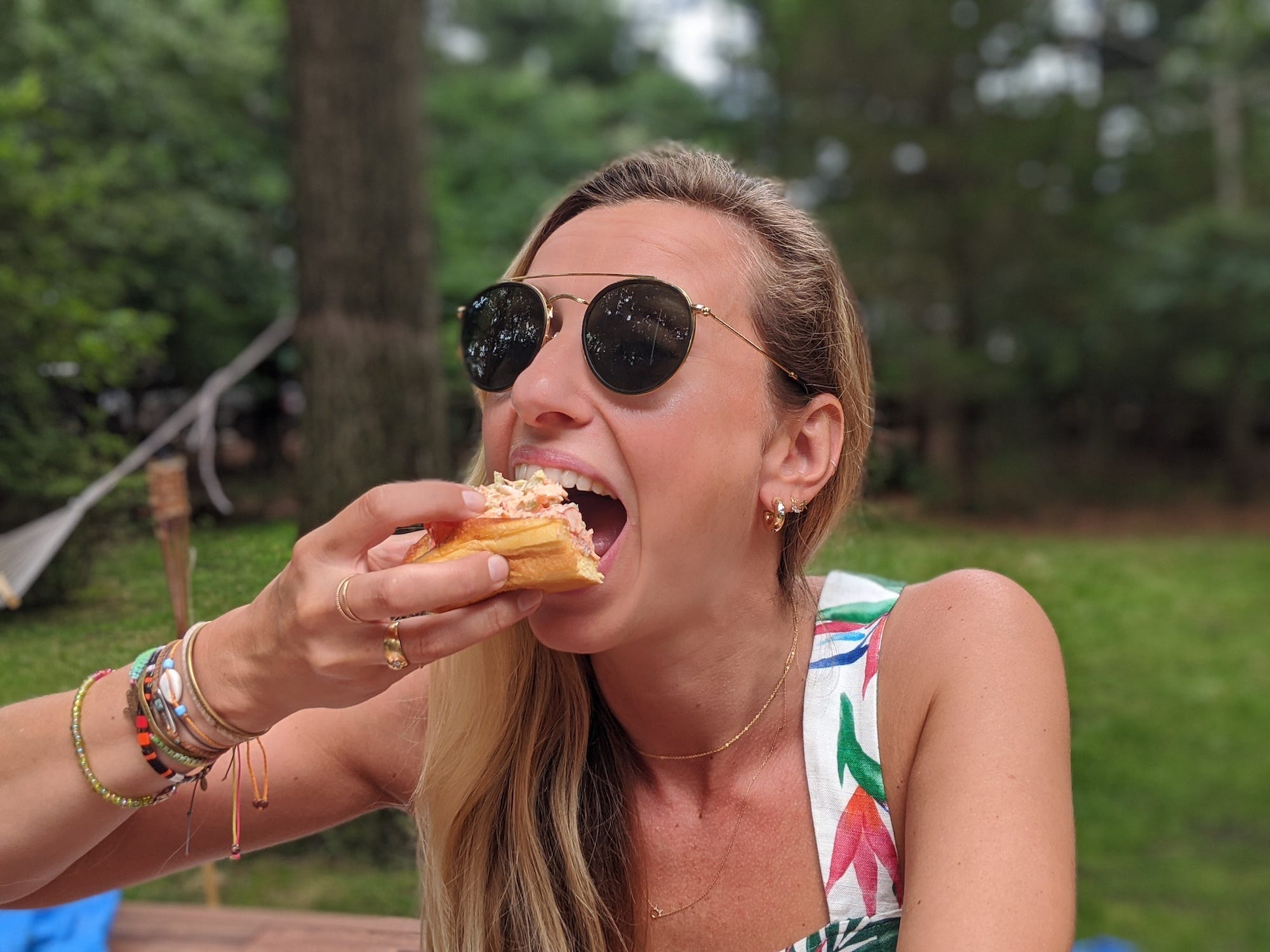 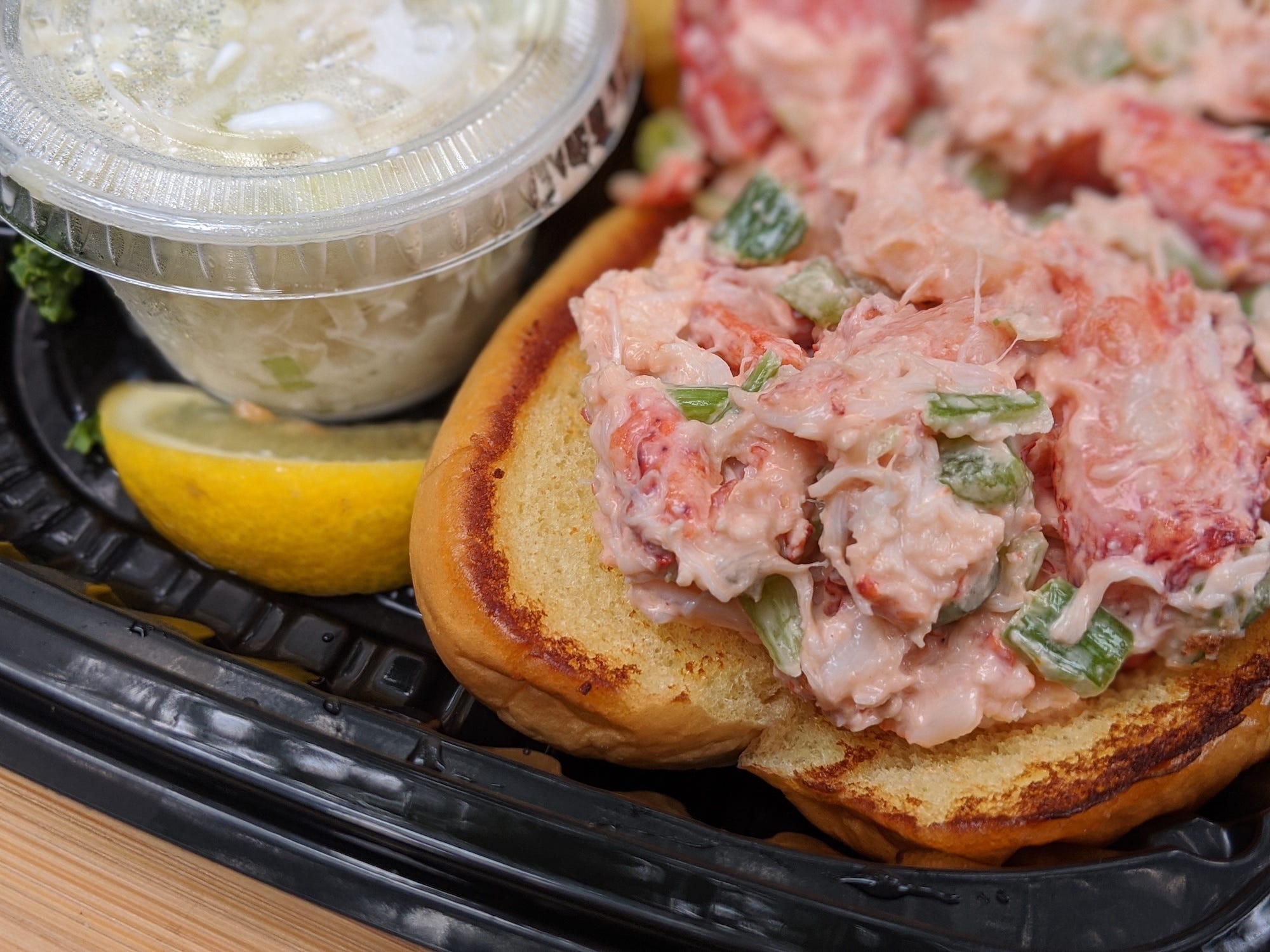 Clam Bar’s roll had lobster that was a little more shredded, and thus felt more like eating an actual lobster salad, in my opinion. It had a little more bite and a slight tang to it, and tasted a touch saltier and more seasoned to me. 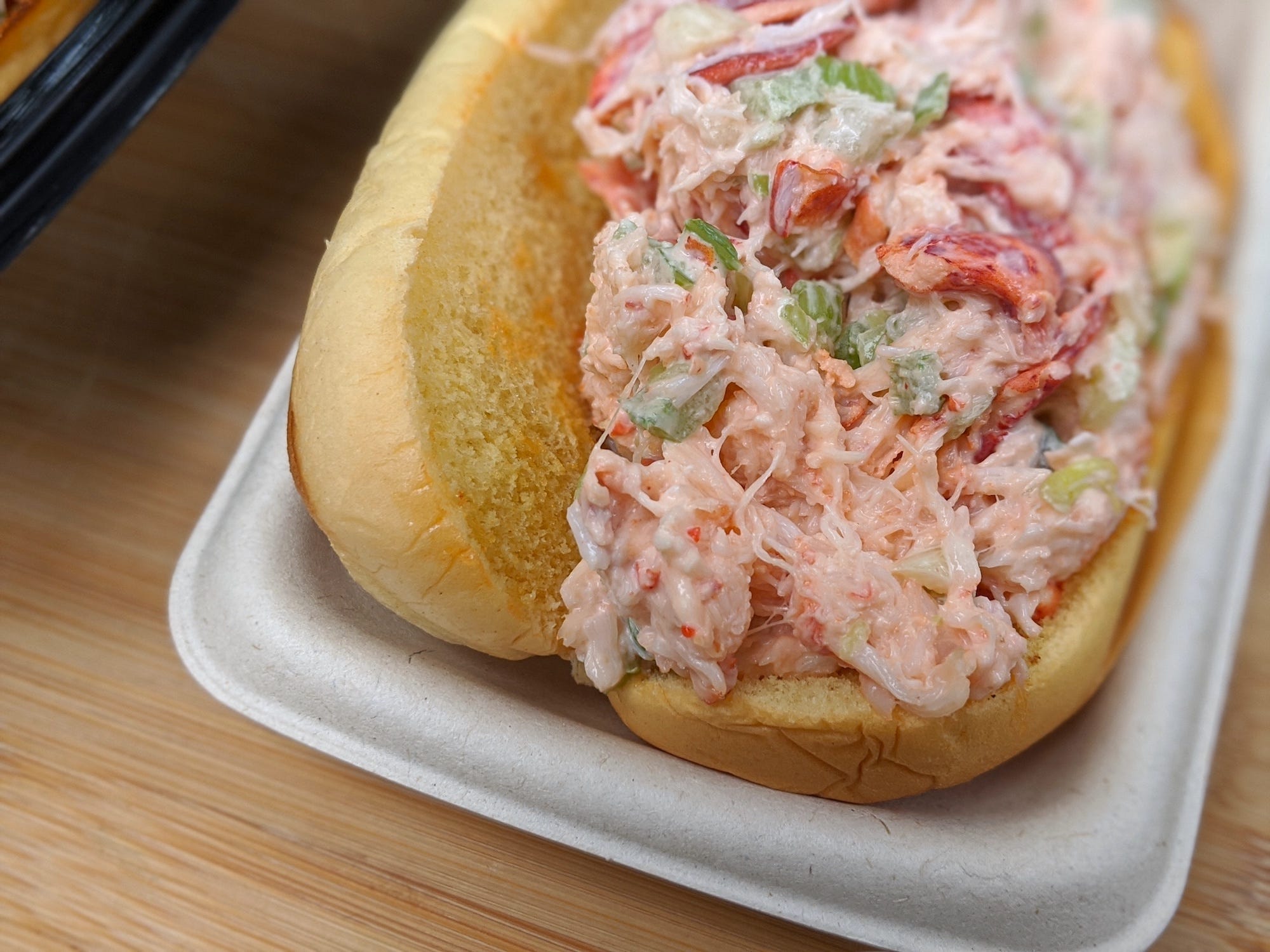 Sophie-Claire HoellerThe lobster meat on Clam Bar’s roll was a little more shredded and tasted more seasoned to me.

My husband preferred the lobster roll at the Clam Bar, calling it “lighter” and “refreshing,” despite it having the same amount, if not slightly more, mayo. 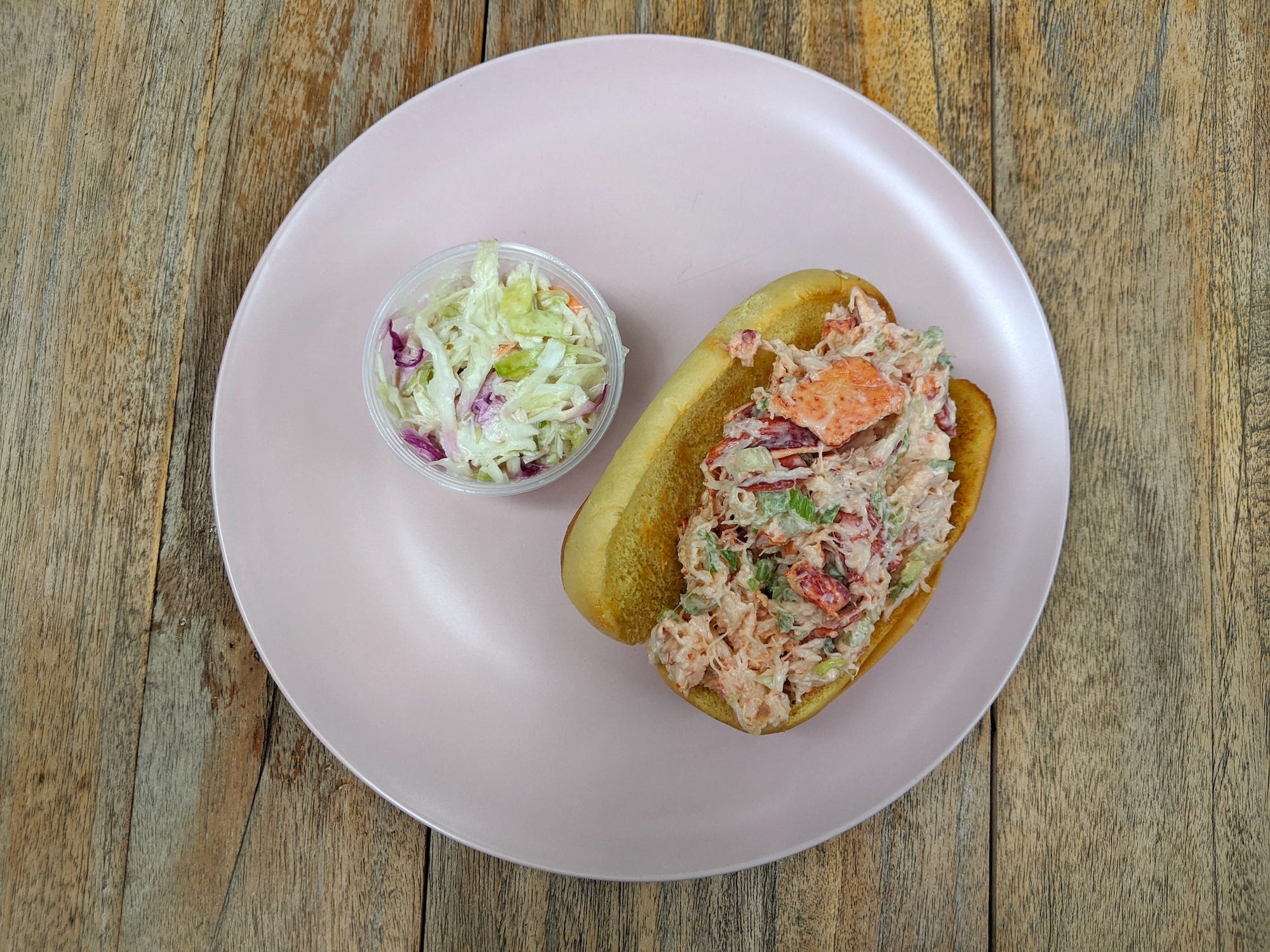 For me, the roll at The Lobster Roll had the edge thanks to its big and chewy chunks of lobster meat. Every bite was hefty and satisfying. 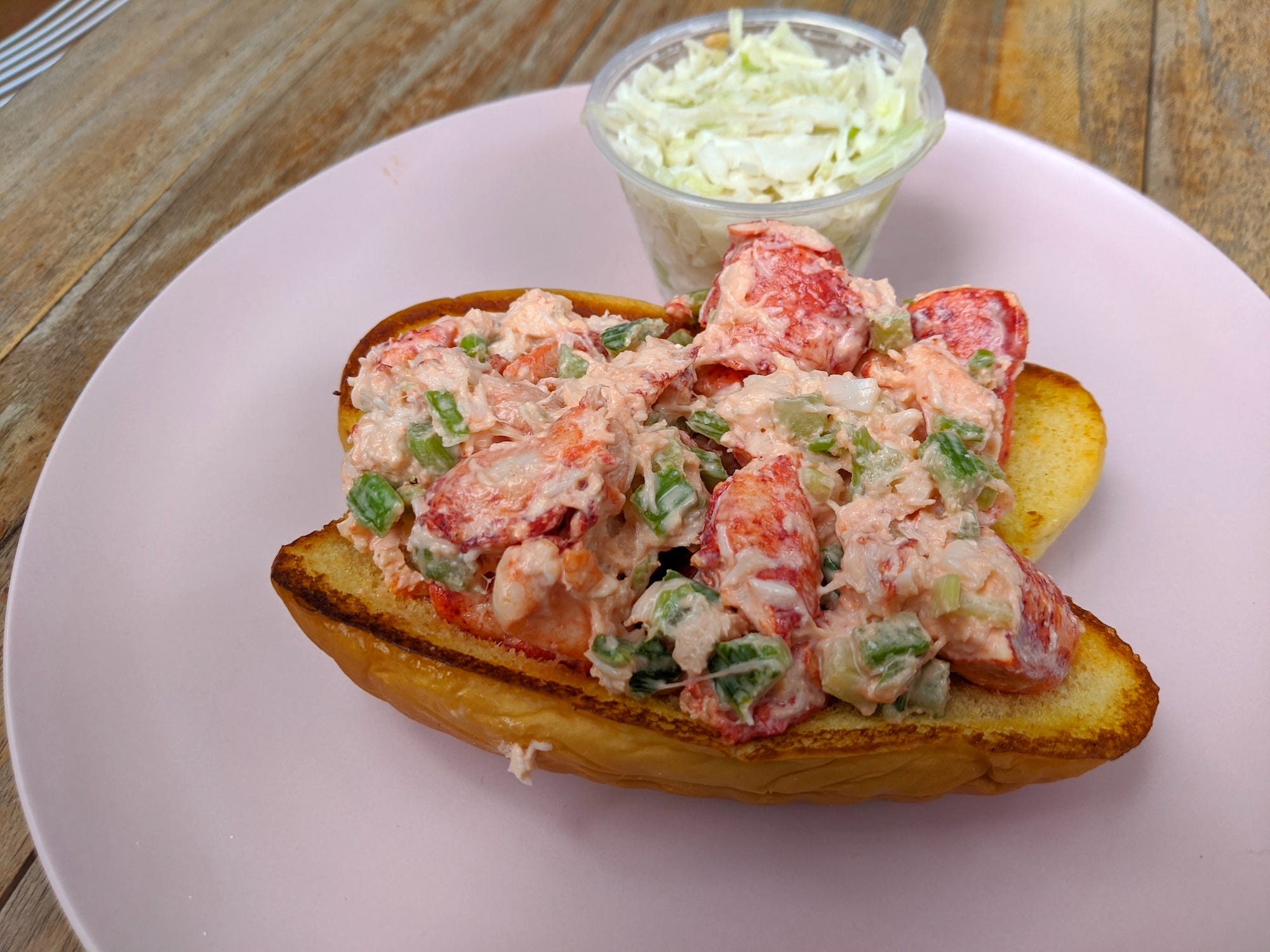 That said, they are truly both perfect lobster rolls, and solid, filling meals on their own. You really can’t go wrong with either. 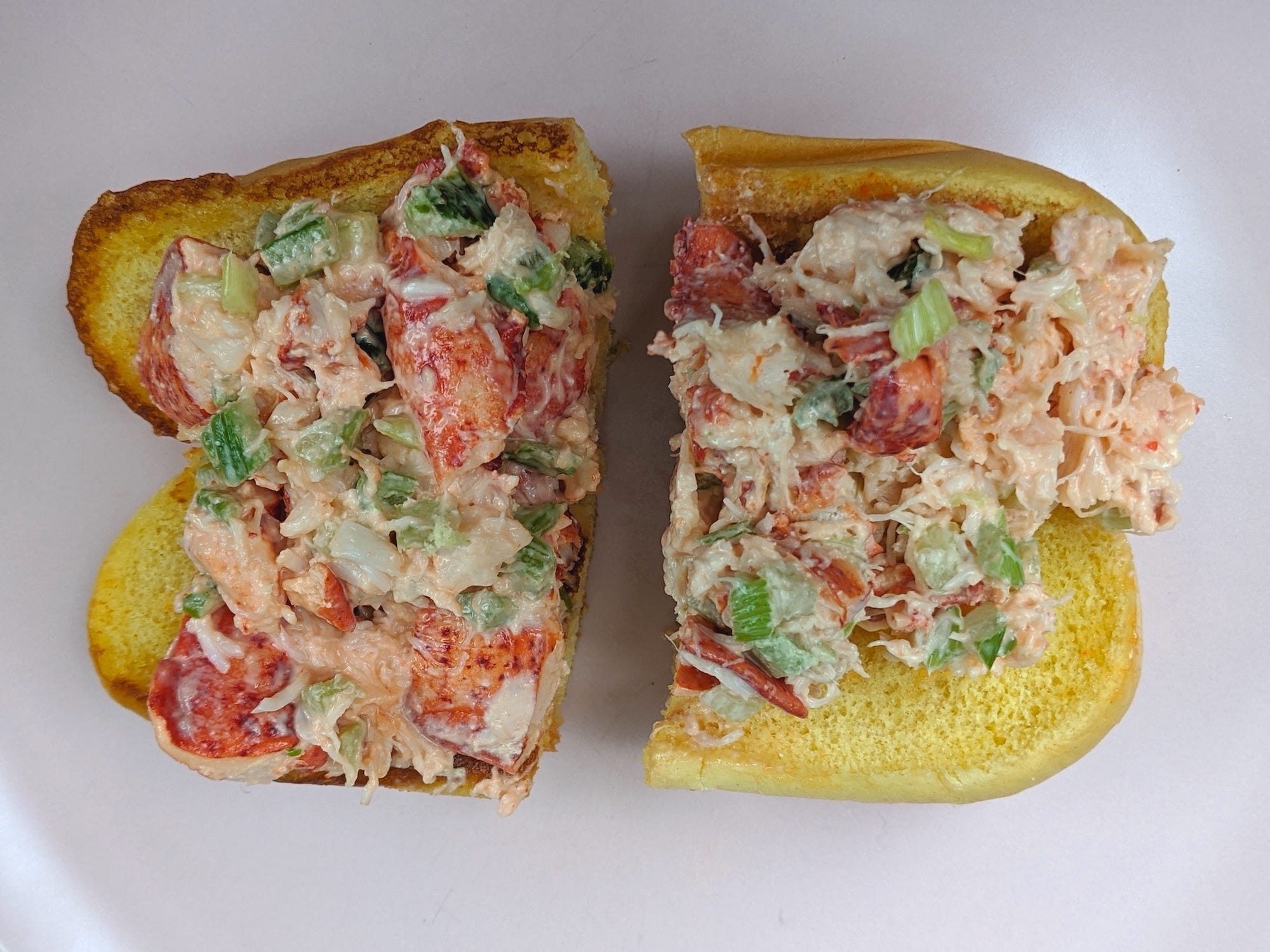 Sophie-Claire HoellerAt the restaurants, it may just come down to the ambiance.