The 20 most iconic boardwalks in the US 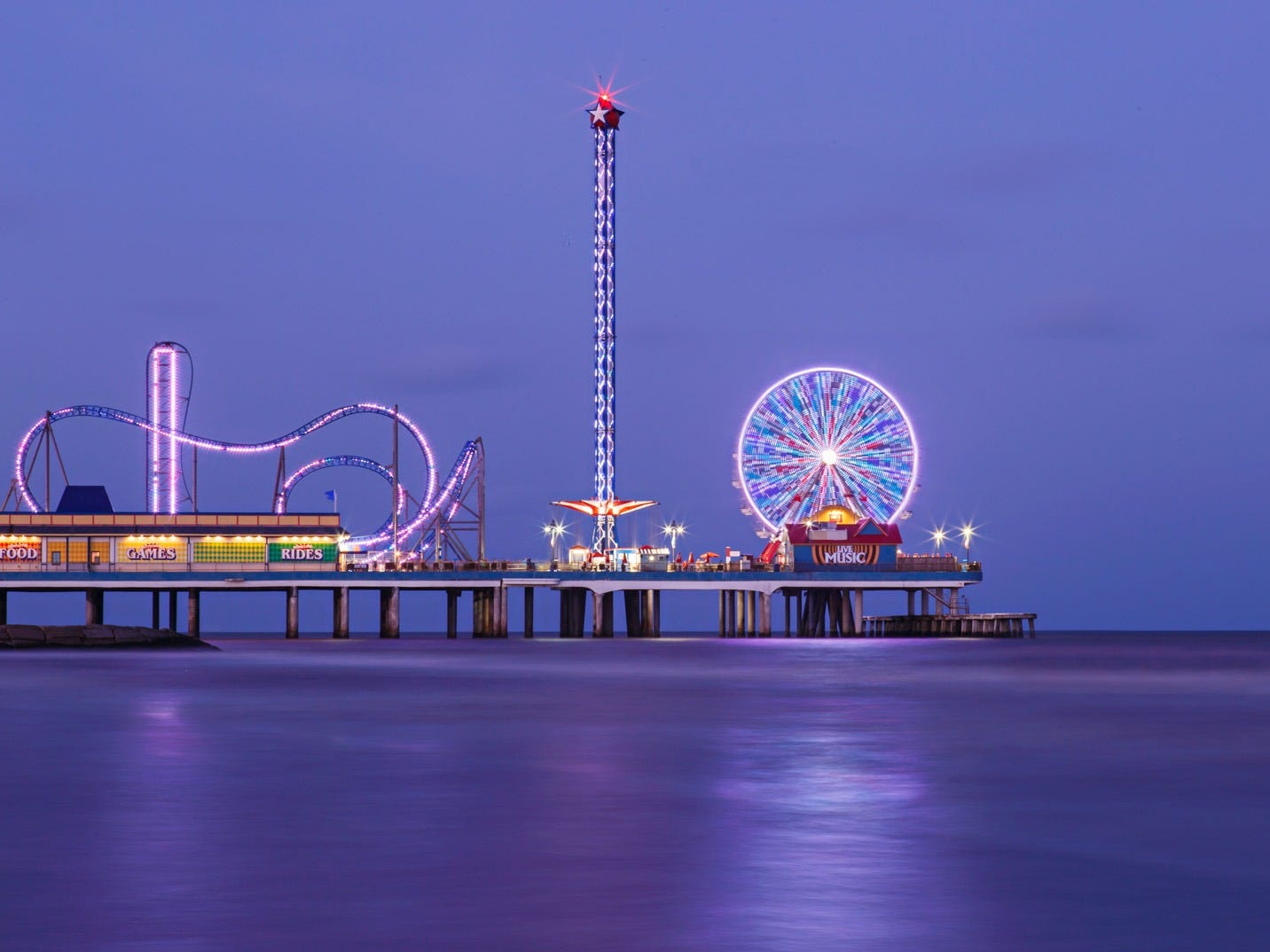 Boardwalks have become popular travel destinations as they can be filled with amusement park rides, restaurants, and unique shops.

From Coney Island in Brooklyn, where you can ride the historic Cyclone roller coaster, to the boardwalk at Maine’s Old Orchard Beach, known for hosting big band acts like Duke Ellington and Cab Calloway, there are a plethora of beachfront destinations across the country.

If you visit any this summer, just be sure to check they’re open, and follow local travel and social distancing guidelines when you’re there.

Scroll down to read about 20 of the most iconic boardwalks in the US. 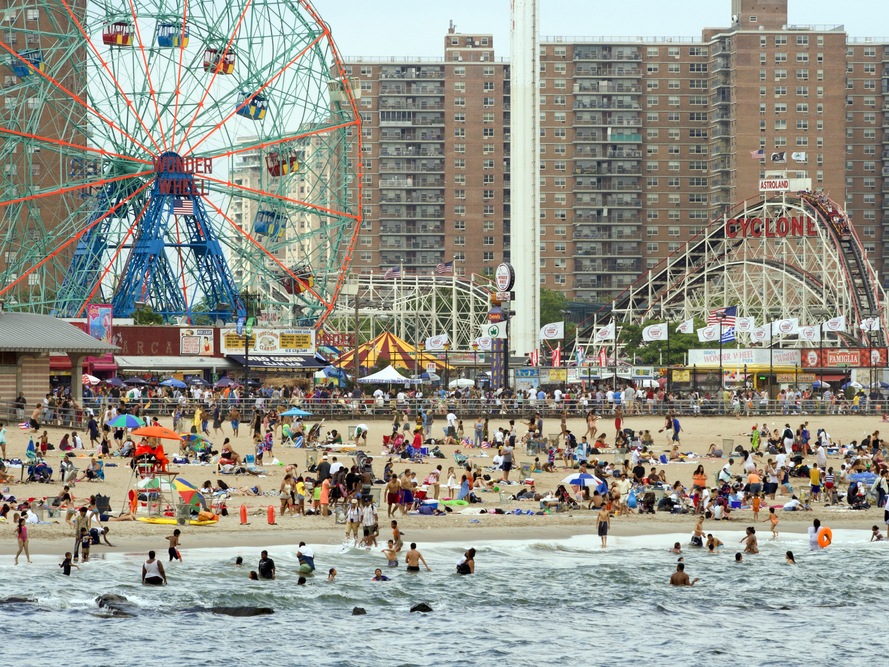 Between 1880 and World War II, Coney Island – which began as a resort destination in the 1820s – boasted the largest amusement area in the US. Coney’s popularity boomed in the 1920s, when the New York City subway system connected Brooklyn and Manhattan. Back then, the subway fare was only 5 cents, earning Coney Island the nickname “nickel empire.” The beach was opened to the public in 1923.

In its heyday, Coney featured three distinct amusement parks:Luna Park (which was revitalized in 2010), Dreamland, and Steeplechase Park.

Today, Luna Park is still open to the public, offering an array of rides, but the park’s true gem is The Cyclone. It’s a historic wooden roller coaster that has been thrilling visitors since it debuted in 1927. Likewise, people come to the boardwalk to take a bite of Nathan’s Famous hot dogs, which has been open since 1916. 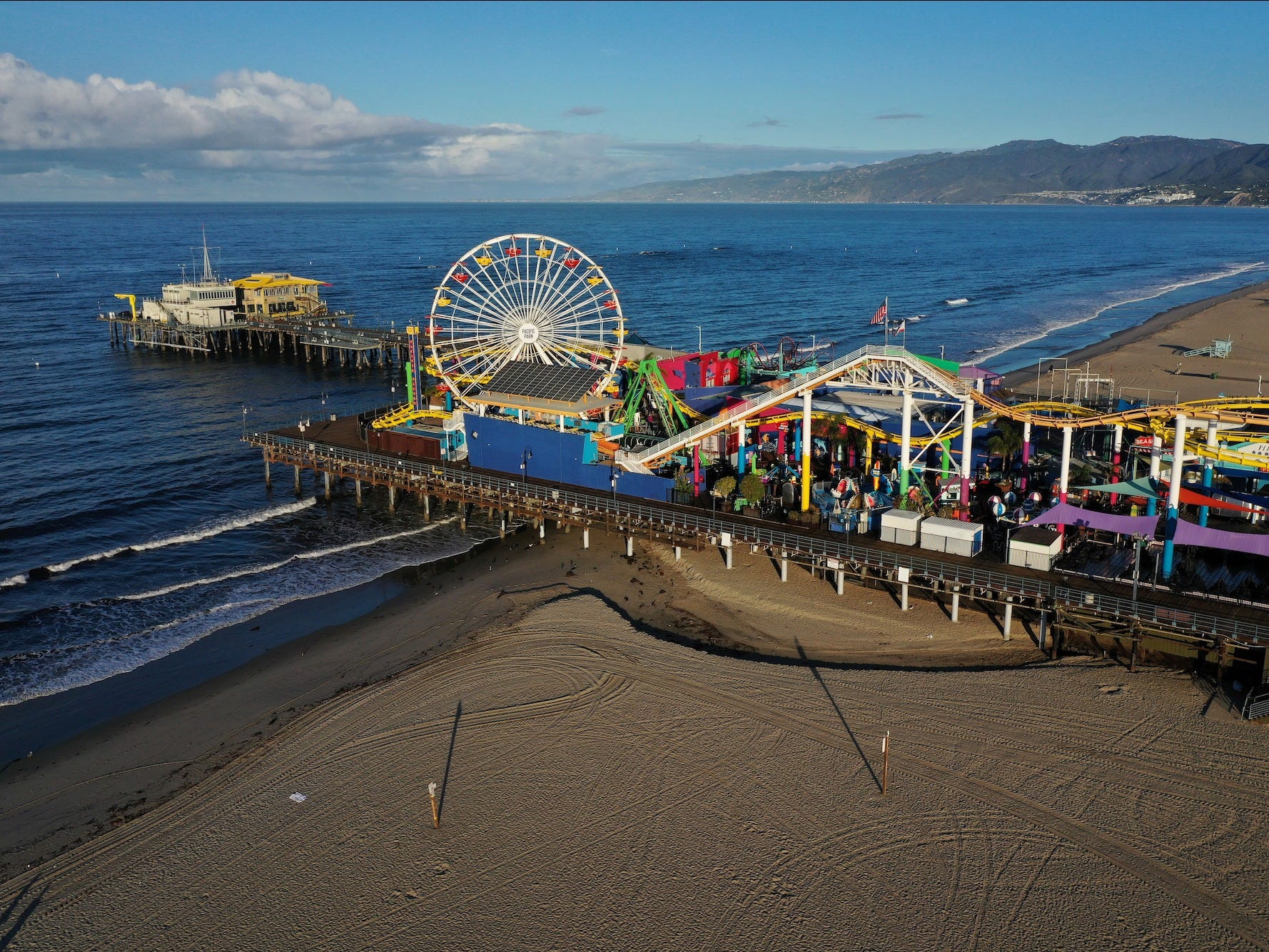 Santa Monica’s boardwalk, known for being the symbolic endpoint of Route 66, began as a tale of two piers. In 1909, the Santa Monica Municipal Pier opened to the public. A popular destination for swimmers and strollers, it inspired an adjacent pleasure pier, opened in 1916 by amusement park entrepreneur Charles Looff, according to the Los Angeles Times.

Today, Santa Monica Pier is home to Pacific Park, which features a roller coaster and a Ferris wheel.

The boardwalk in Atlantic City, New Jersey, is known for its casinos and for hosting the Miss America pageant. 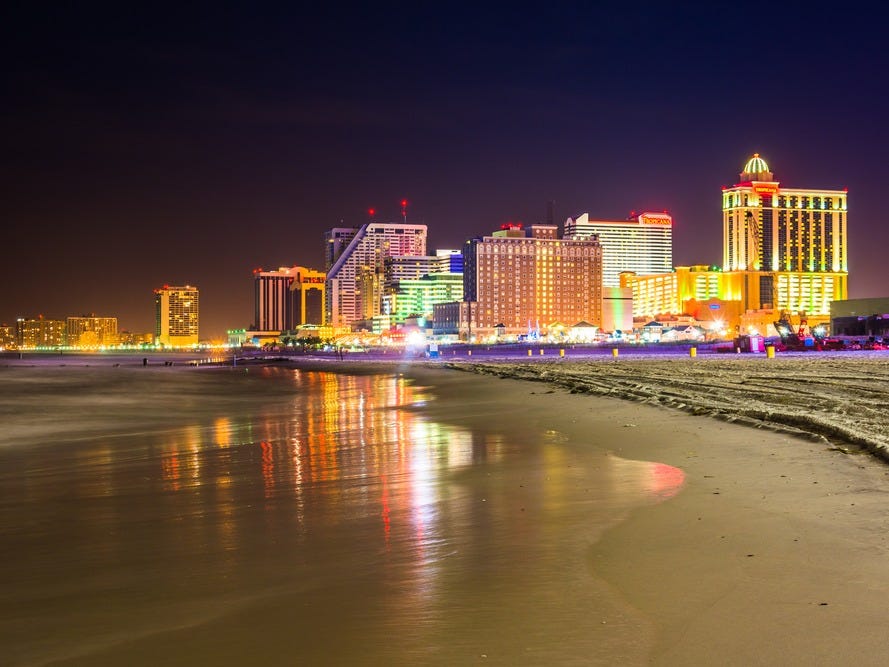 Although Atlantic City is famous for its casinos, its boardwalk – which was built in the 19th century to keep sand from encroaching on the upscale beachfront hotels – is an attraction in its own right. The initial boardwalk, installed in 1870, cost $US5,000 to make. Through the years, wear and tear from tourists and damage from storms necessitated replacements.

Home to the Steel Pier amusement area, which juts 1,000 feet into the ocean, the AC boardwalk is perhaps most famous for hosting the Miss America pageant, an event held annually since 1921.

The original boardwalk in Rehoboth Beach, Delaware, opened in 1879 and has now become the “Nation’s Summer Capital.” 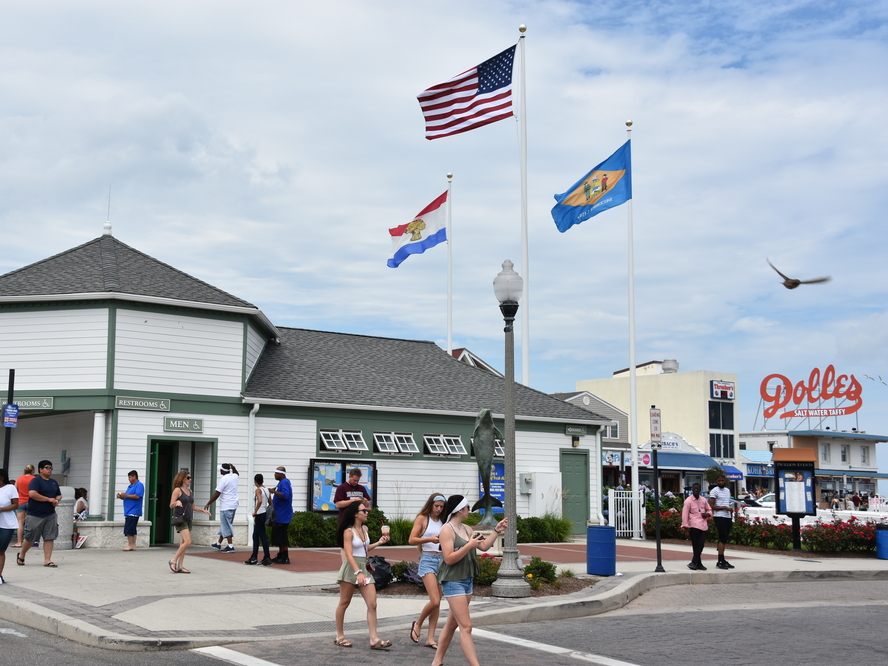 Nicknamed the “Nation’s Summer Capital” because of its proximity to Washington, DC, Delaware’s Rehoboth Beach has had a boardwalk since 1879. The original was 8 feet wide and 3,000 feet long.

Some famous spots include Grotto Pizza, which was founded in 1960, and Dolle’s Candyland, a saltwater taffy and fudge emporium that’s been open since 1926.

The Ocean Front Walk at California’s Venice Beach is a favourite because of its street vendors and performers. 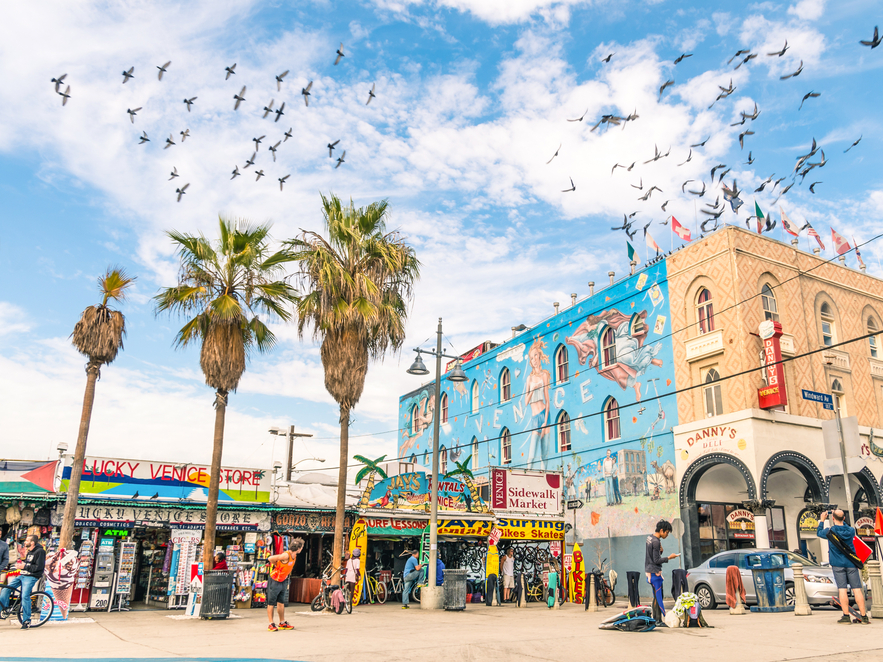 Venice, a beachfront neighbourhood in Los Angeles with a counterculture reputation, was founded in 1905 by tobacco industry millionaire Abbot Kinney, the namesake of the area’s boutique-lined boulevard.

Known as the Ocean Front Walk, Venice’s boardwalk is famous for its street vendors and performers. You’ll find everything from tattoo parlors to fortune tellers to marijuana dispensaries. 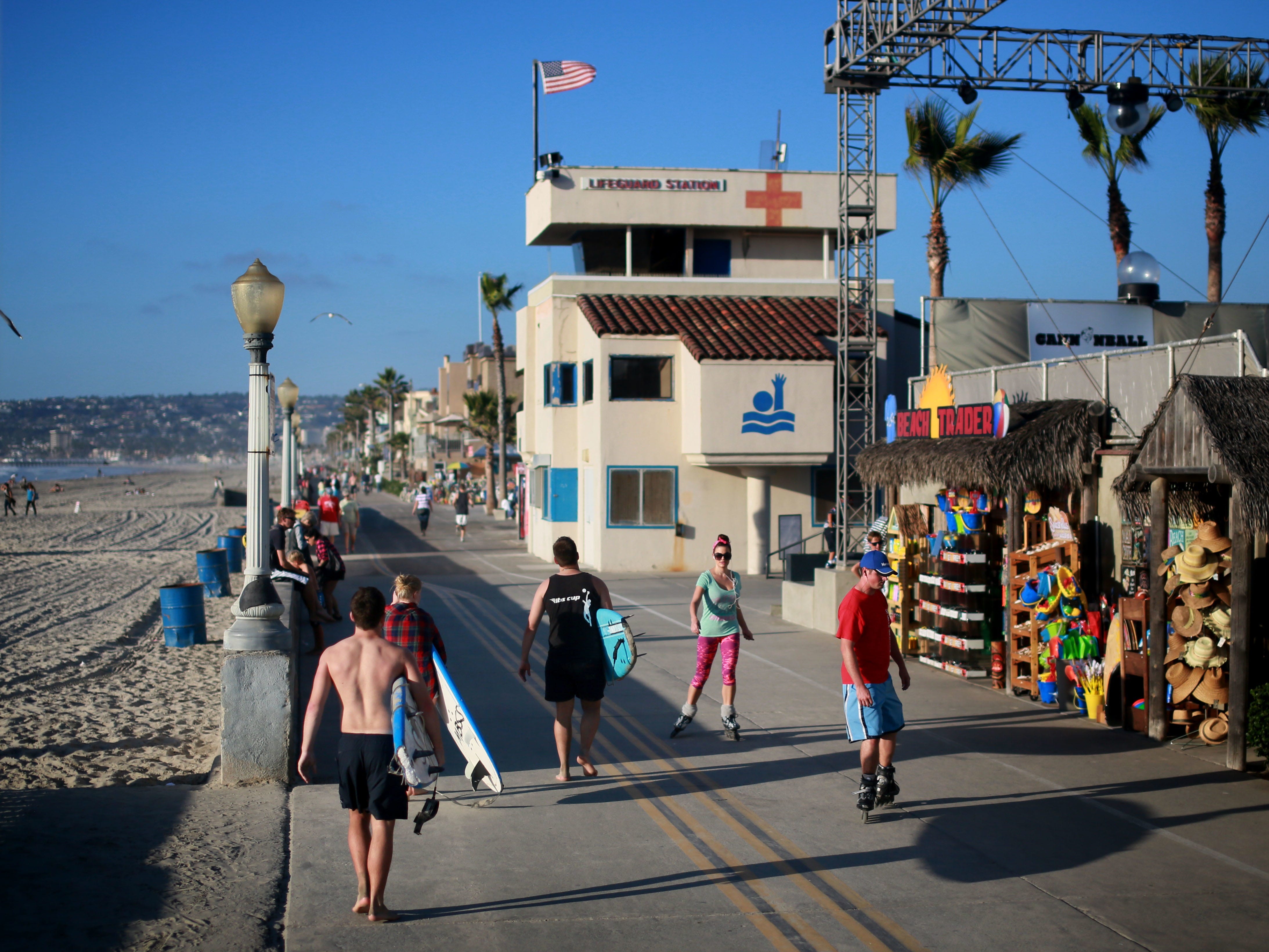 Mission Beach in San Diego dates back to the 1900s. Stretching for two miles, its boardwalk has bars and clubs that are perfect for nightlife. You will also find Belmont Park, which is an amusement park that is home to Giant Dipper Roller Coaster, dating back to 1925.

Along the boardwalk, you will also discover miniature golf, rental shops, and an arcade.

The most recognisable landmark on Navy Pier in Chicago, Illinois, is the 200-foot-tall Ferris wheel. 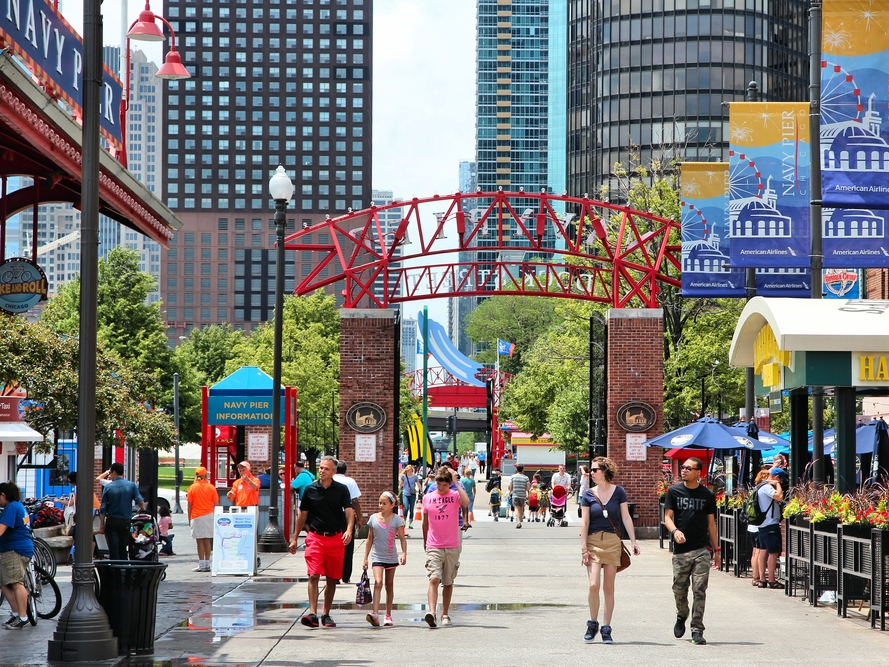 Chicago’s Navy Pier was designed by renowned architect Charles Sumner Frost. It opened to the public in 1916 as “Municipal Pier,” but was renamed in 1927 to pay homage to the Navy personnel who had been stationed there during World War I.

With the addition of greener public spaces and a 200-foot-tall Ferris wheel that offers 360-degree views of Chicago and Lake Michigan, Navy Pier was recently revamped for its centennial.

In Sandwich, Massachusetts, the oldest town on Cape Cod, you can cross a 1,350-foot “plank walk.” 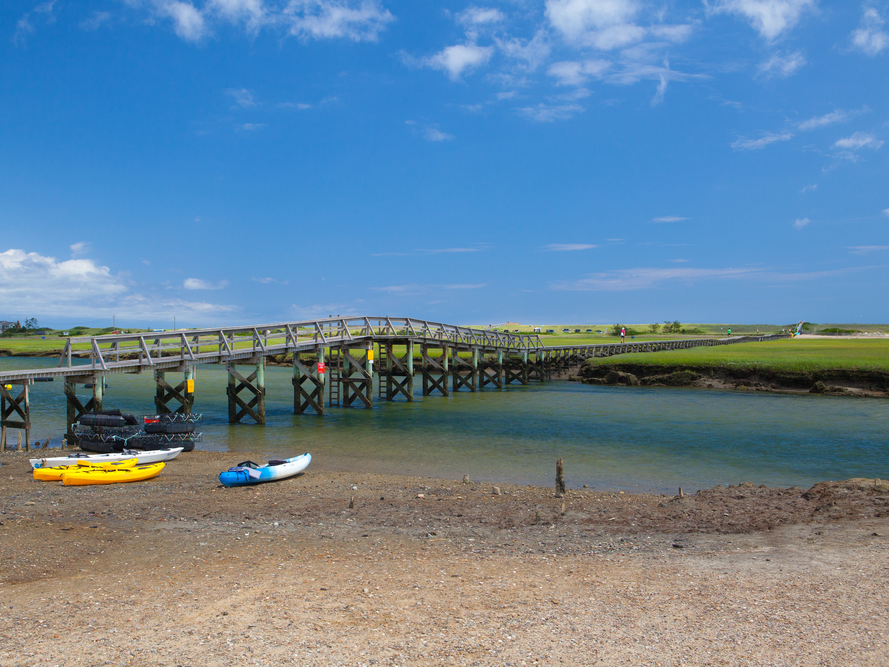 First built in 1875, the boardwalk – or “plank walk,” as it’s also known – in Cape Cod’s oldest town stretches 1,350 feet over Mill Creek and onto Town Beach on Cape Cod Bay.

Although it has been destroyed multiple times due to severe storms (Hurricane Bob decimated it in 1991), it has been rebuilt using the original design.

Ocean City, Maryland’s first boardwalk, was constructed in 1900. Back then the boards were removed every winter. 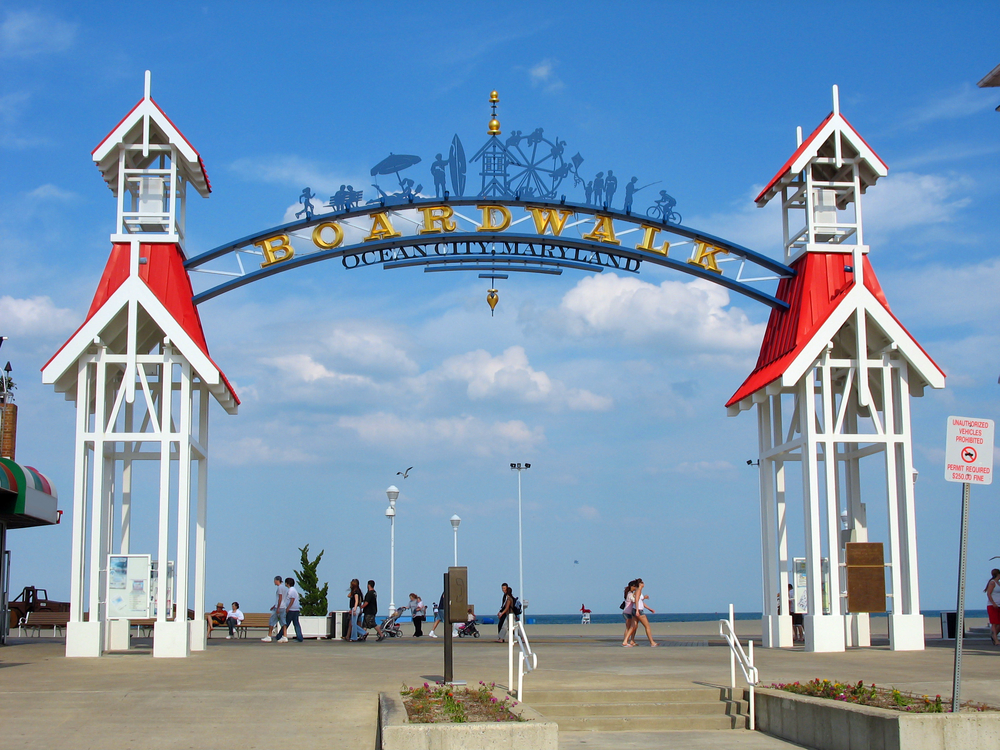 Ocean City, Maryland, is actually a barrier island. The town didn’t become a resort until 1876, when a railroad bridging Sinepuxent Bay connected it to the mainland. Its first boardwalk opened in 1900. Back then, the boards were removed in the winter and stored until spring.

The Oceanfront Boardwalk & Promenade in Myrtle Beach, South Carolina, is one of the youngest boardwalks in the US. 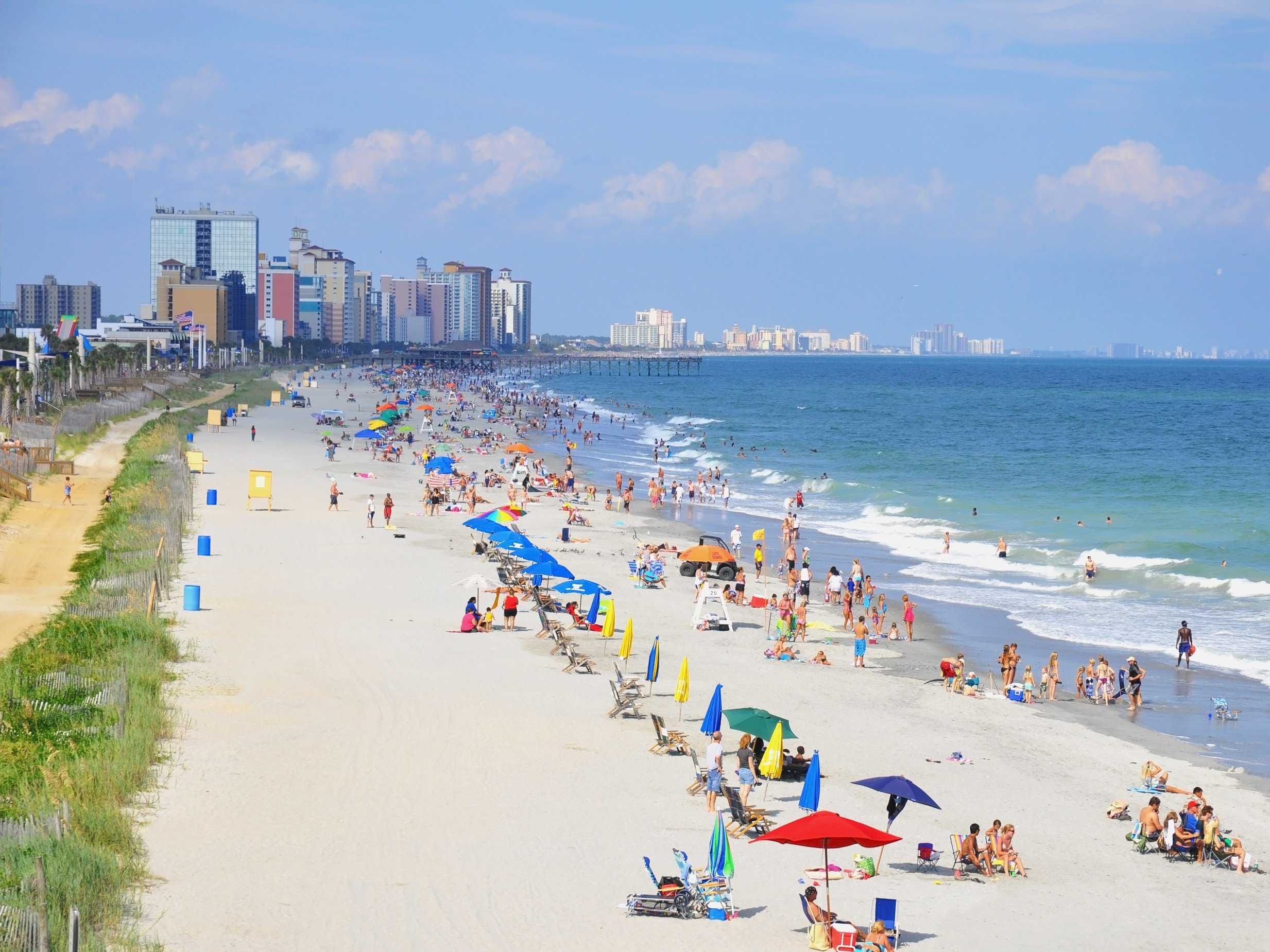 ShutterstockMyrtle Beach’s waterfront is known as the ‘Grand Strand,’ a phrase coined by a newspaper writer in 1949.

While the city’s famous waterfront was nicknamed the “Grand Strand” by writer Claude Dunnagan in 1949, Myrtle Beach’s Oceanfront Boardwalk & Promenade wasn’t built until 2010.

This modern boardwalk, which hosts the Carolina Country Music Fest, also offers plenty of enticing attractions such as the SkyWheel (a 200-foot-tall Ferris wheel) and Ripley’s Believe It or Not! museum.

When it was built in 1924, the Broadwalk in Hollywood, Florida, was designed to entice beachfront property buyers. 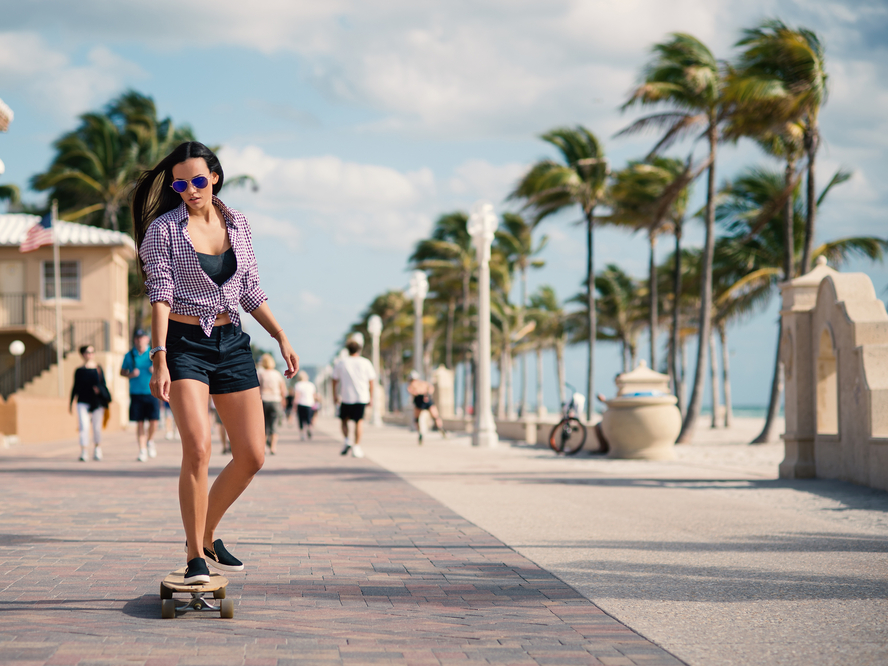 The Hollywood Broadwalk (often misconstrued as “boardwalk”) was built in 1924. Comprised of coral rock that was dredged from the Intracoastal Waterway, it was later paved over with asphalt.

It now features a reconstructed path for walking in addition to a biking lane and a jogging path. The Broadwalk has 50 restaurants, 30 shops, and three resorts.

On the other hand, there is the scenic Miami Beach Boardwalk in Florida. 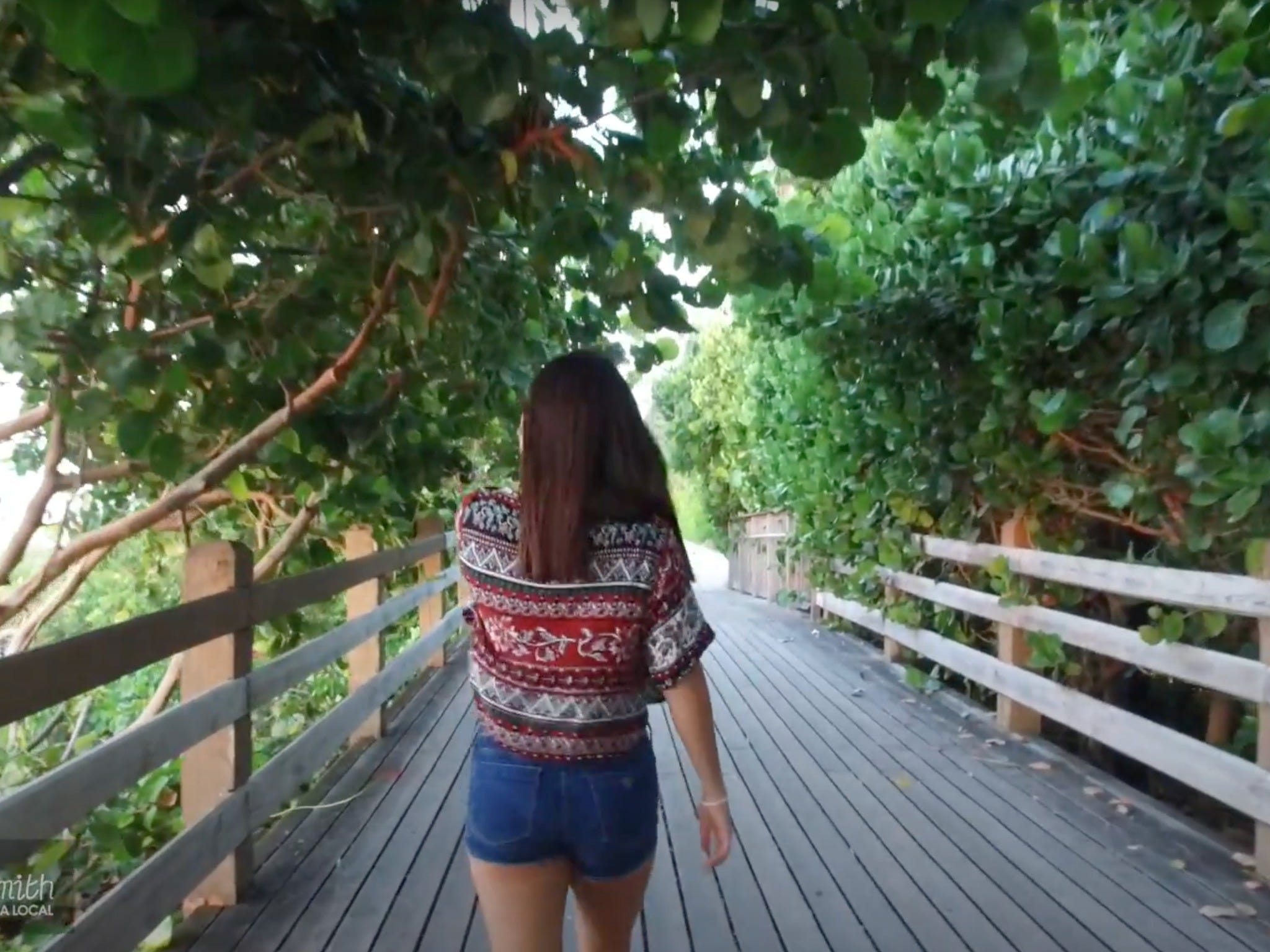 On one side of the boardwalk, you get views of South Beach and the ocean, and on the other side, you get a peek into the expensive hotels and condos that line the beach.

The boardwalk in Santa Cruz, California, began as the location of a public bathhouse. 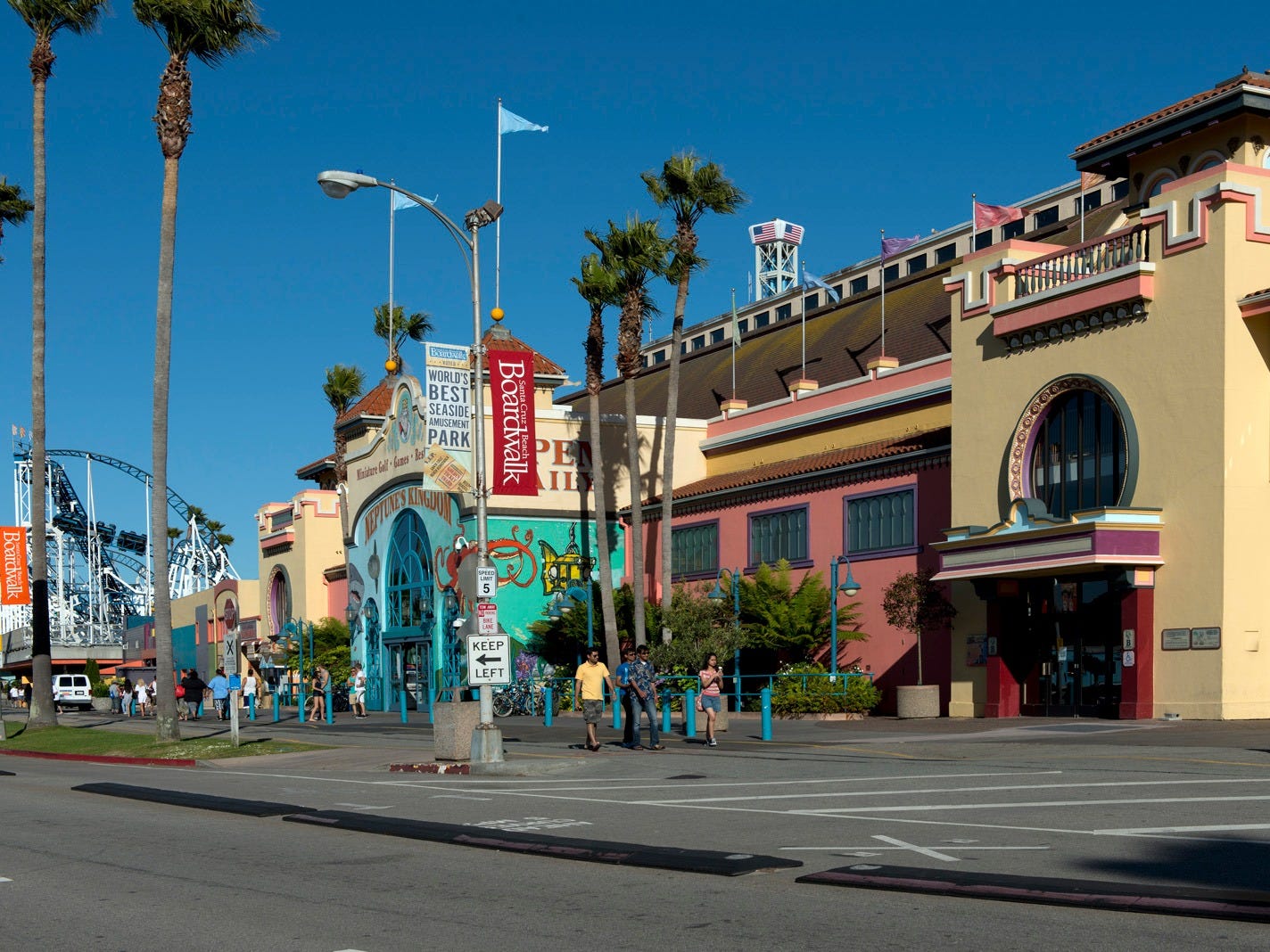 The Santa Cruz boardwalk dates back to 1865, when John Leibrandt opened a public beach bathhouse by the San Lorenzo River. Other businesses, such as curio shops and restaurants, appeared shortly after. By the end of the century, entrepreneur Fred W. Swanson began planning a casino and boardwalk.

Today, you can still ride the wooden Giant Dipper roller coaster,which opened in 1924.

Virginia Beach’s first boardwalk was built in the late 19th century for guests of luxury hotels. 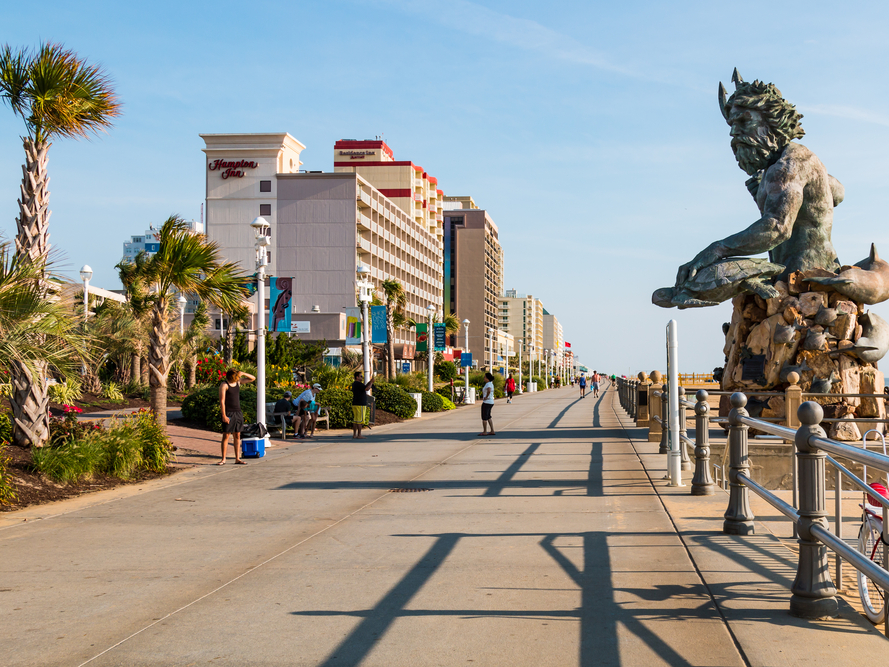 Built in the late 19th century, Virginia Beach’s first boardwalk was only 8 feet wide and spanned a mere four blocks. It was designed to be used by guests of the area’s luxury hotels.

The current boardwalk, which spans 3 miles, is made of concrete rather than wood. One of its most well-known landmarks is the 34-foot-tall King Neptune statue.

The Pleasure Pier in Galveston, Texas, opened in 1943 as a military recreation facility. 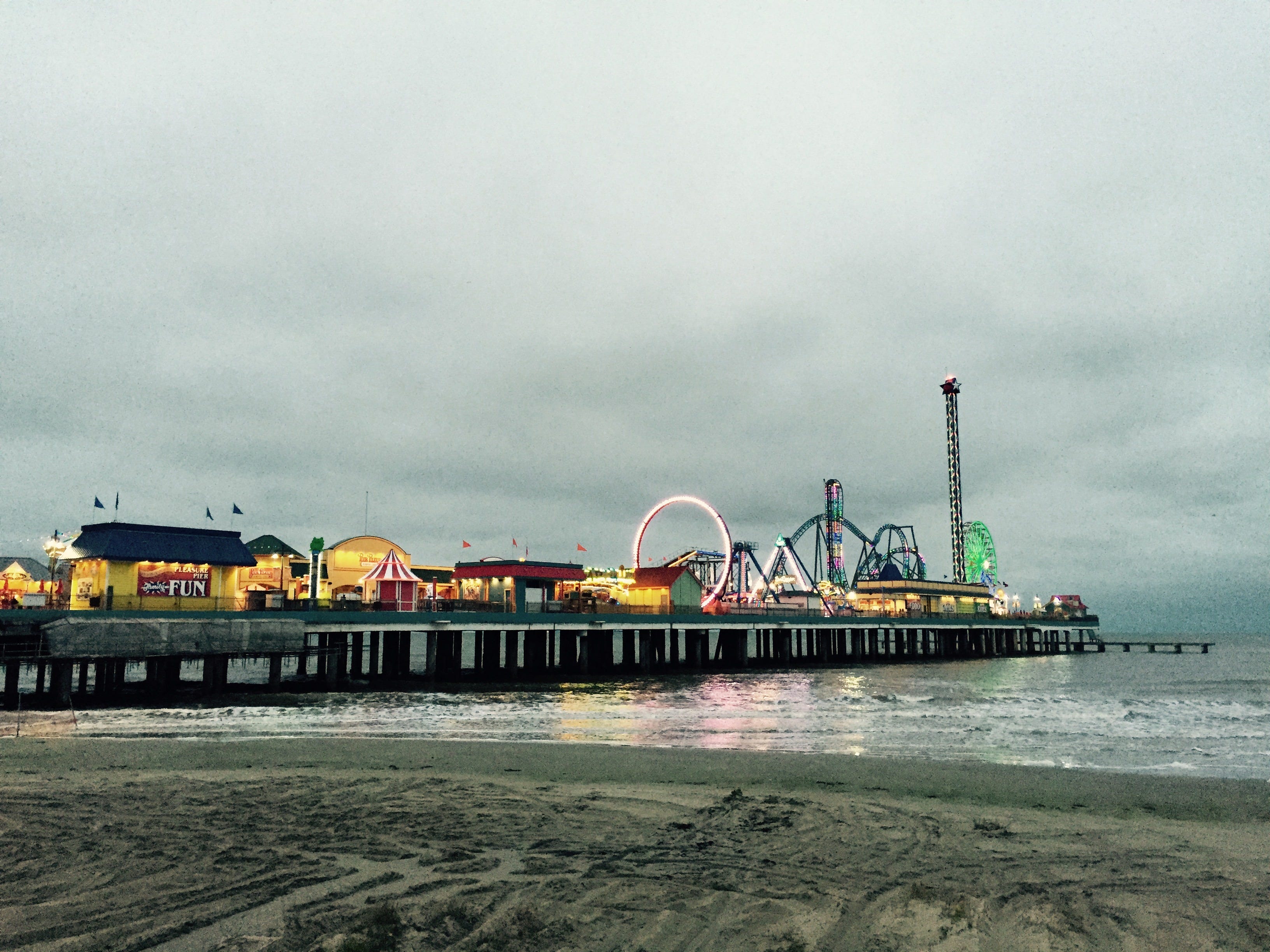 Galveston’s Pleasure Pier was originally constructed in 1943 as a recreational facility for military personnel. At the time, the park – which cost $US1.5 million to build ($US22.8 million today) – was the largest of its kind. It featured amusements such as a penny arcade and an electric swing ride.

Due to its location on the Gulf Coast, the Pleasure Pier has had a stormy history. The first pier was severely damaged by Hurricane Carla in 1961. Its current incarnation, a nostalgia-focused amusement park, opened in 2012. The park has several rides, including a roller coaster, a log flume, and a galaxy wheel. 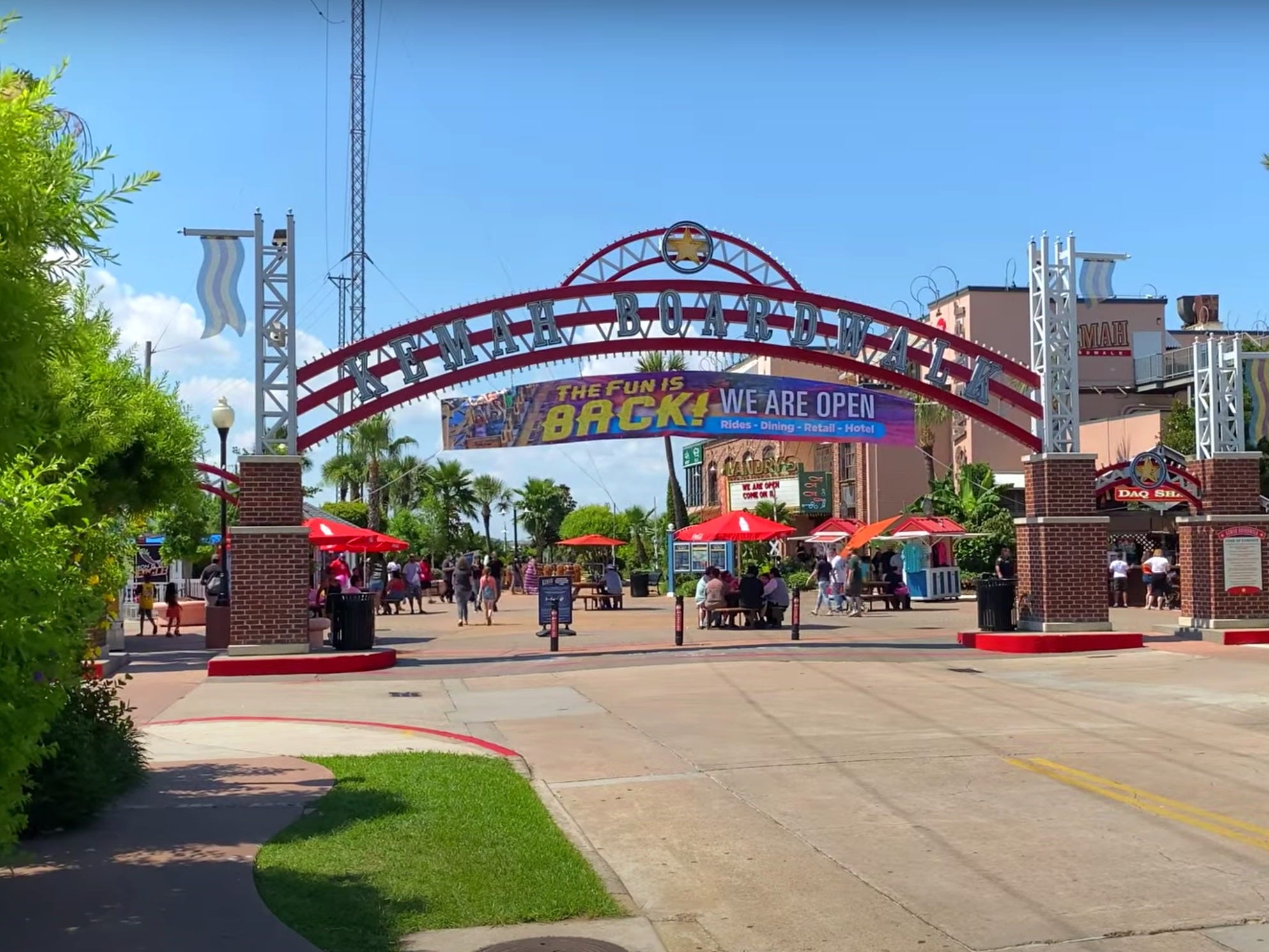 Originally a dining spot, Kemah Boardwalk was built on Galveston Bay and Clear Lake, which are just 20 miles from Houston. Many say the boardwalk is known for its impressive rides, which include a 65-foot Ferris wheel and a 36-foot carousel.

But the boardwalk also has shops, restaurants, and festivals that draw families of all ages to the shores of Galveston Bay.

New Hampshire’s Hampton Beach boardwalk is designed to be family-friendly. With fun traditions, such as the Master Sand Sculpting Competition and a children’s festival, Hampton Beach – a former farming community that began to attract tourists in the early 20th century – is a family-friendly retreat.

The boardwalk is known for the carb-heavy treats at Blink’s Fry Doe and world-class entertainment at the Casino Ballroom.

The boardwalk at Maine’s Old Orchard Beach is famous for being a stop on the swing music circuit. 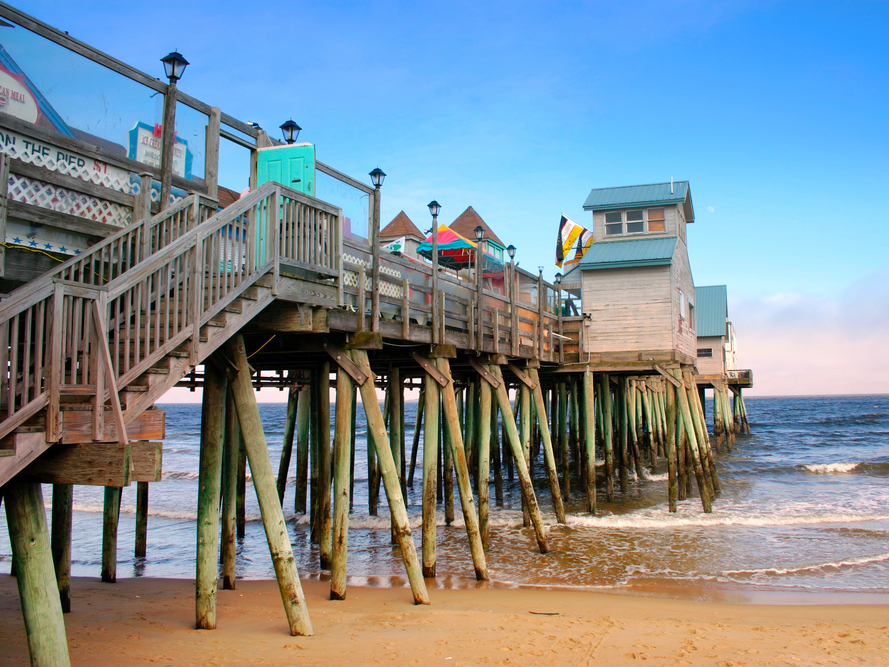 Throughout the 19th century, various railroads connected Old Orchard Beach to New England and even to Montreal, bolstering the town’s reputation as a tourist destination.

Old Orchard Beach’s boardwalk is known for its place in swing music history. Venues such as the Pier Casino Ballroom and Palace Ballroom hosted some of the most well-known big band acts, from Duke Ellington to Cab Calloway.

The boardwalk in Wildwood, New Jersey, is a favourite among tourists because of its kitschy architecture. 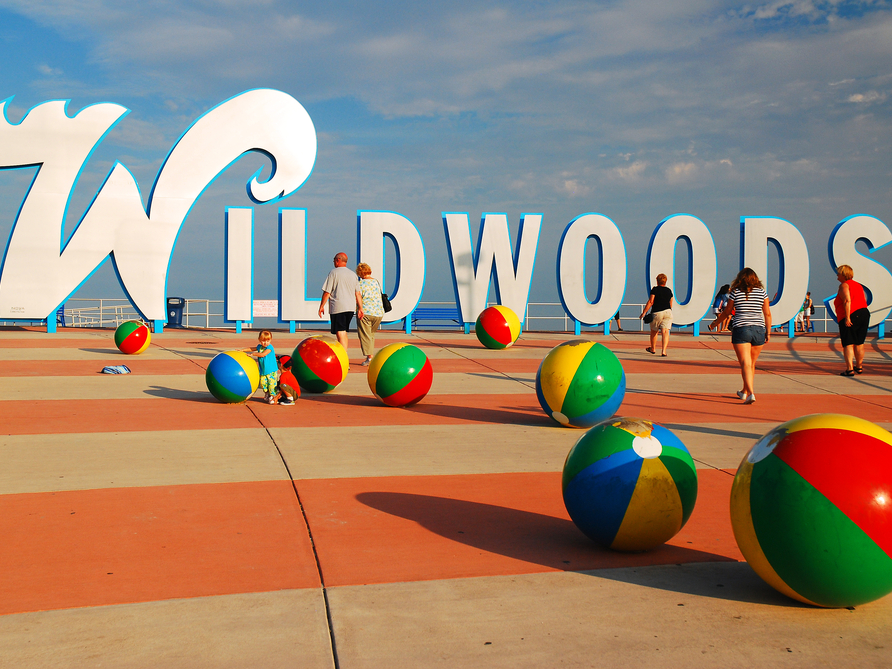 New Jersey’s Wildwoods are known for their Doo-Wop architecture – characterised by kitschy neon signs and irregular shapes – and for the exhilarating rides at Morey’s Piers and Water Parks.

The area’s first boardwalk was completed in 1900.

Visiting Disney World’s BoardWalk is like stepping back in time. 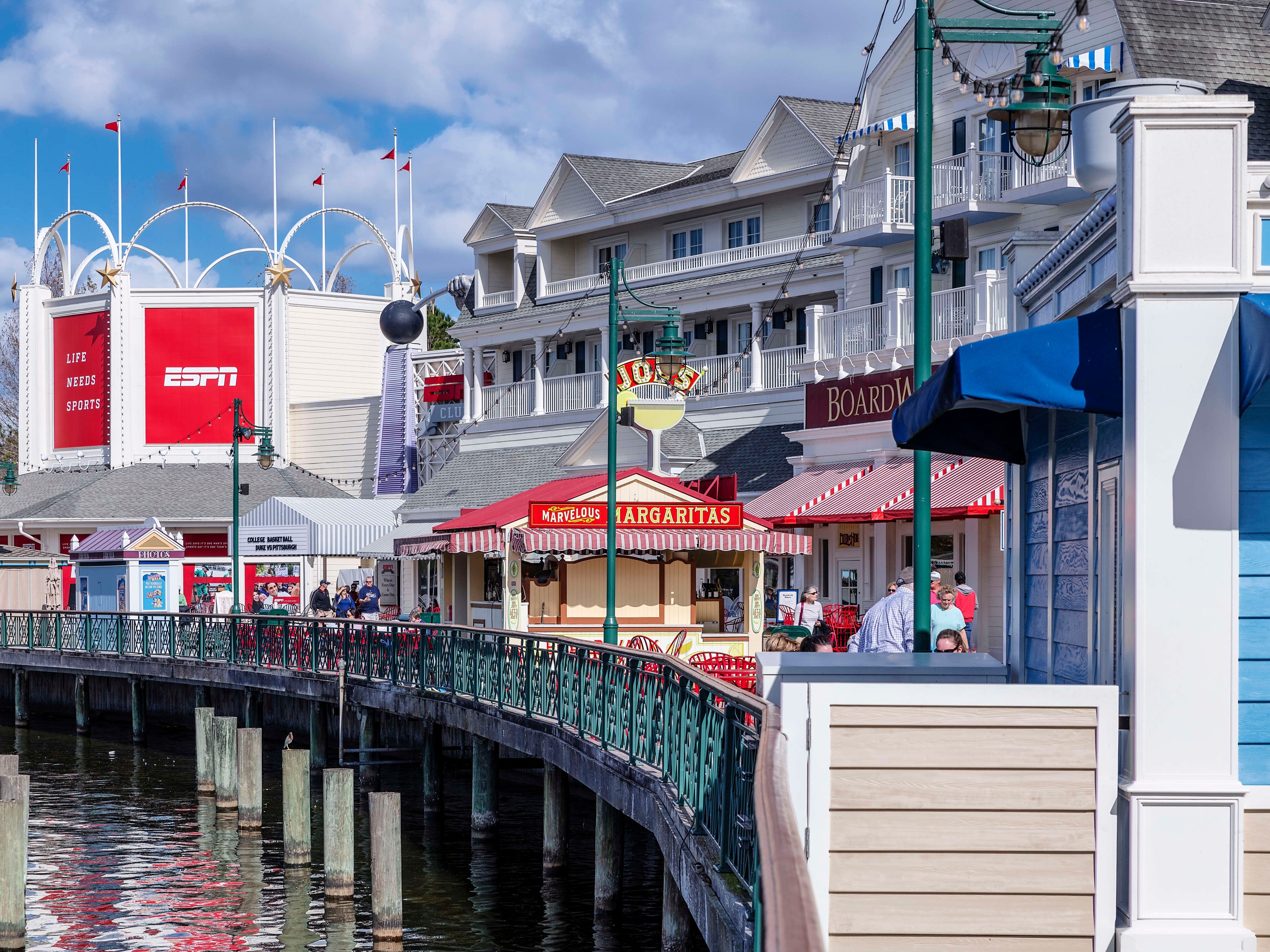 You can step back in time at Disney World’s BoardWalk. The quarter-mile promenade is meant to evoke Coney Island at the turn of the century.

In fact, you can get an authentic taste of Brooklyn at Ample Hills Creamery’s BoardWalk outpost.