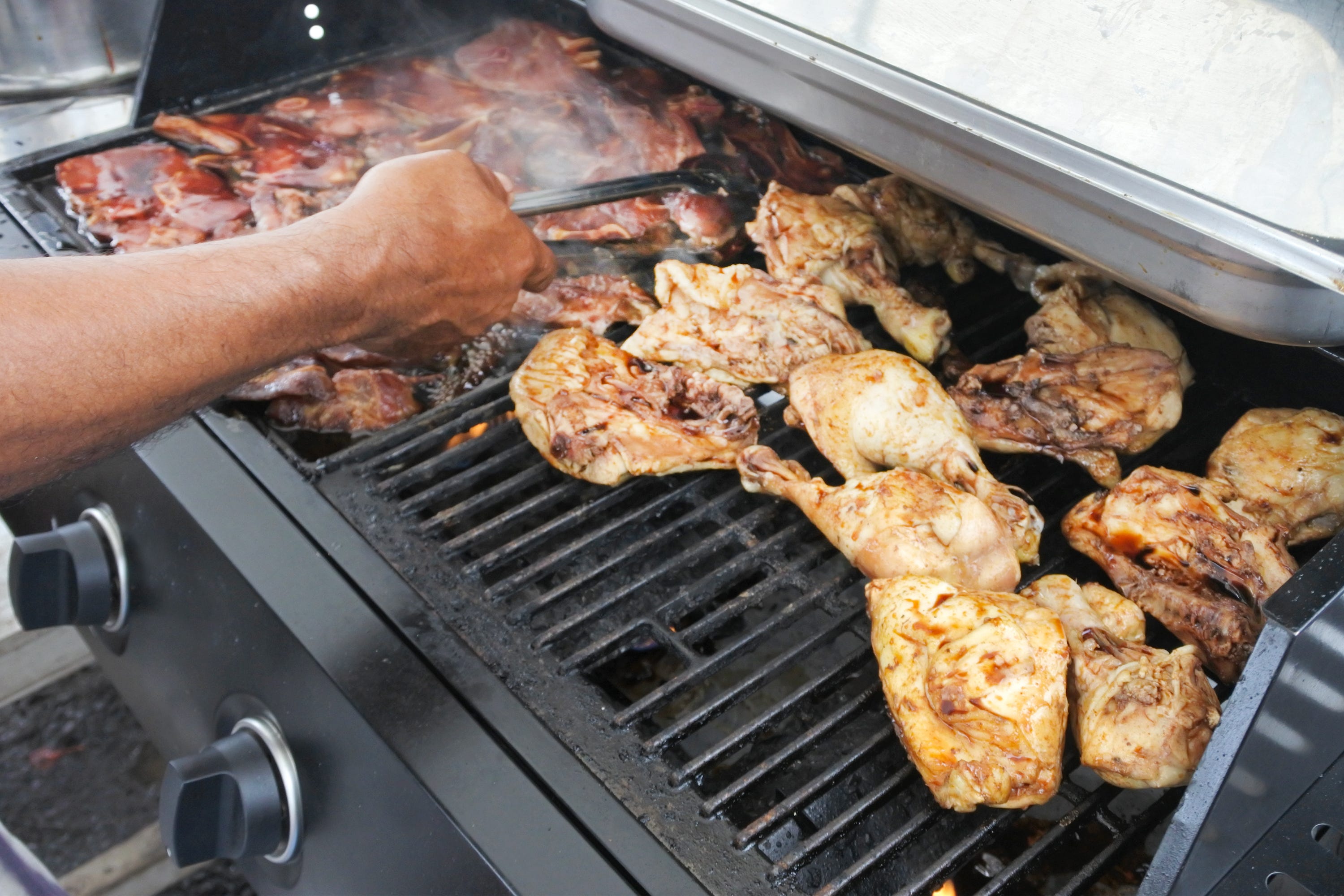 iStockSome foods come out better on the grill than others.

Some foods are great for grilling, and others are more trouble than they’re worth.

To help you figure out what to make next, Insider asked four chefs to share which foods are ideal for grilling and which you should probably avoid.

Here are some of the best and worst foods to cook on a grill, according to chefs.

Corn is one of the easiest things to grill. 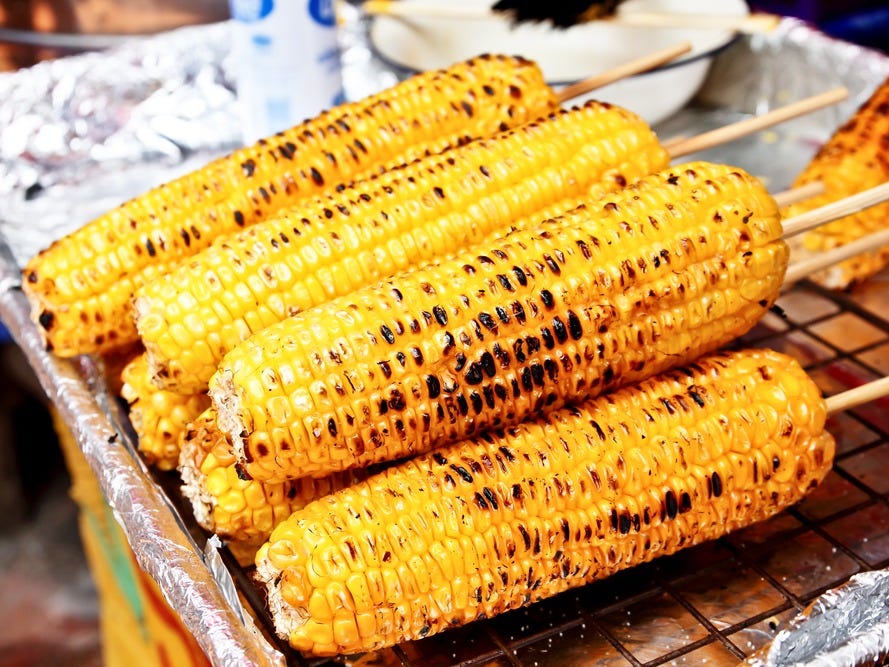 ShutterstockYou may want to soak corn before you grill it.

Corn on the cob is simply the perfect vegetable for grilling, according to Erik Pettersen, executive chef and owner of Evo Italian.

Grilled corn is very hard to mess it up, he said.

“I like to grill my corn in the husks, but it’s important that you soak them first,” Pettersen told Insider. “I leave them soaking for six to eight hours, but 30 minutes is enough.”

After they have soaked, throw them on the grill, said Gabriel Rucker, executive chef of Le Pigeon and Canard, and the husk will steam the corn.

It’s OK if the outside burns, as the corn will still be fresh and hot inside, he explained. 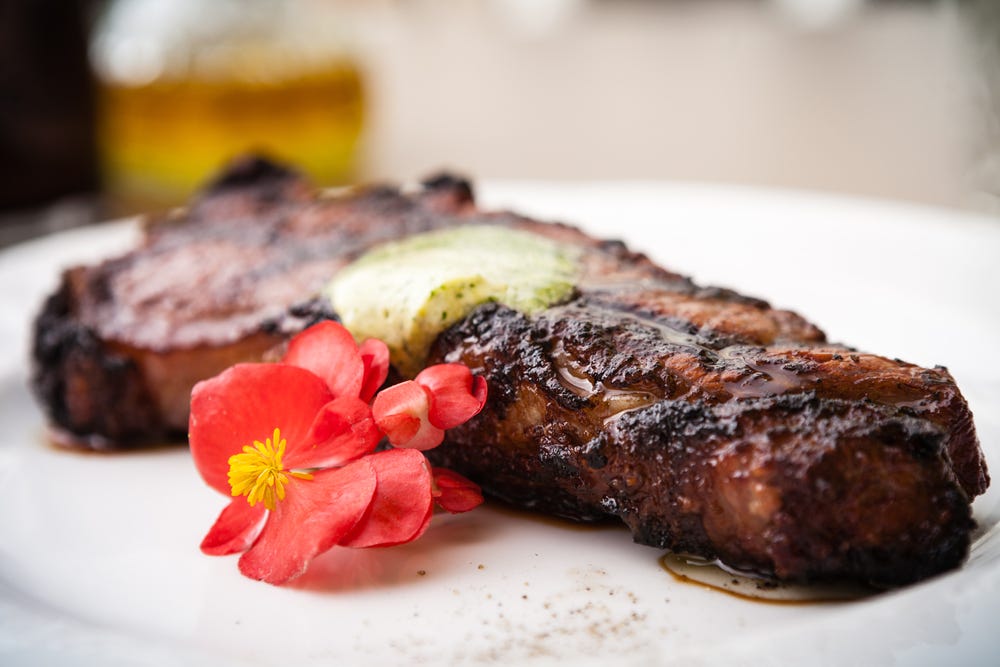 Strip steak is a great meat to work with on the grill, especially if you’re a novice home cook, according to Rucker.

“New York strip is a very tender cut of steak,” Pettersen told Insider. “It’s from the short loin of the cow, so it is much easier to cook on the grill than filet mignon.”

Pettersen said with this cut of meat, cook it for two to three minutes and then rotate it until you achieve the temperature you’d like. 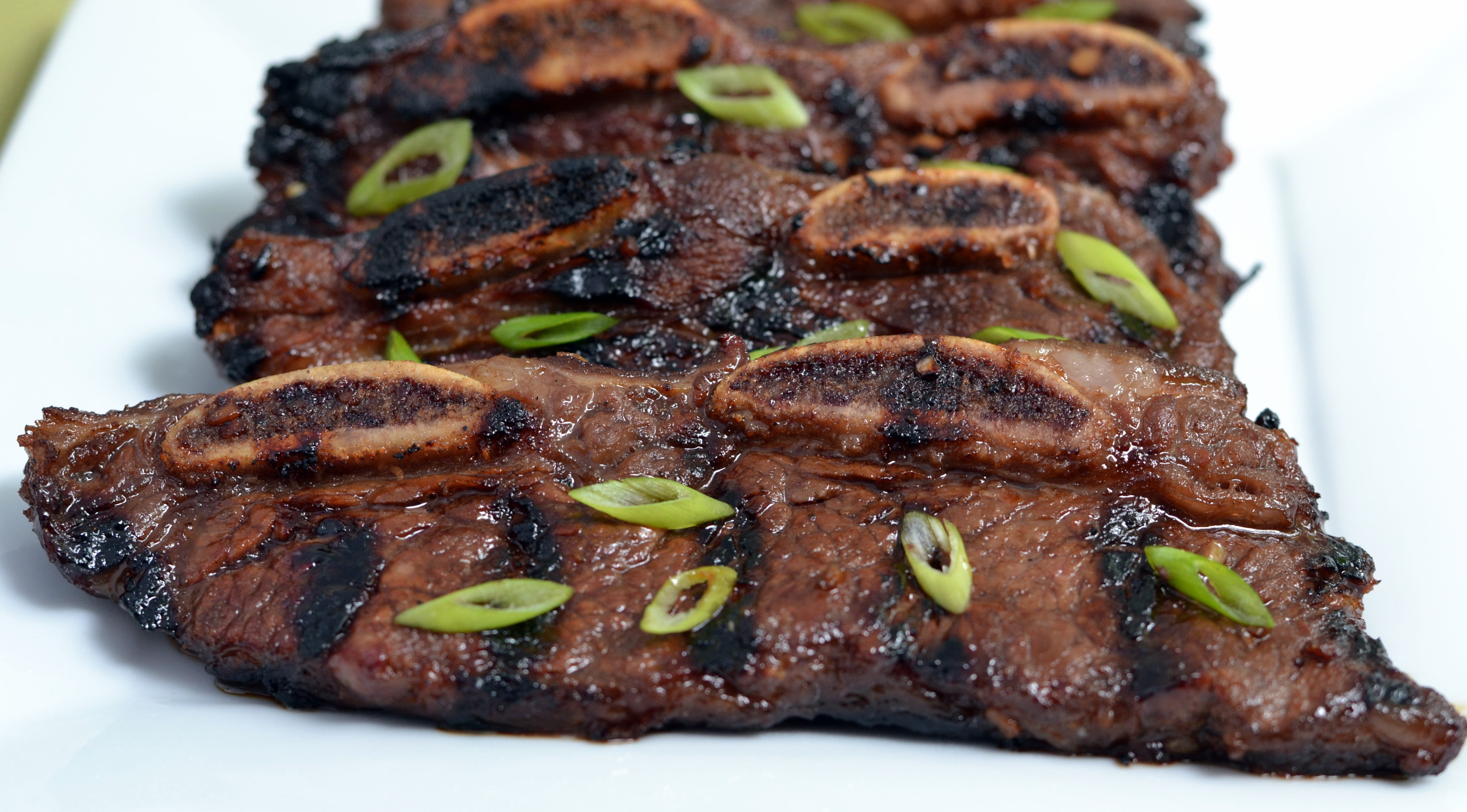 ShutterstockYou can also season them.

Short ribs are another type of meat that does well on the grill, according to Salil Mehta, chef and owner of Laut and Laut Singapura.

Beef short ribs are great for grilling because they cook quickly and are easy to prepare, Mehta said.

Once your ribs are grilled, the fat and the bones add so much natural flavour, he added.

Heartier fishes that are firm and flavorful are perfect for charring. 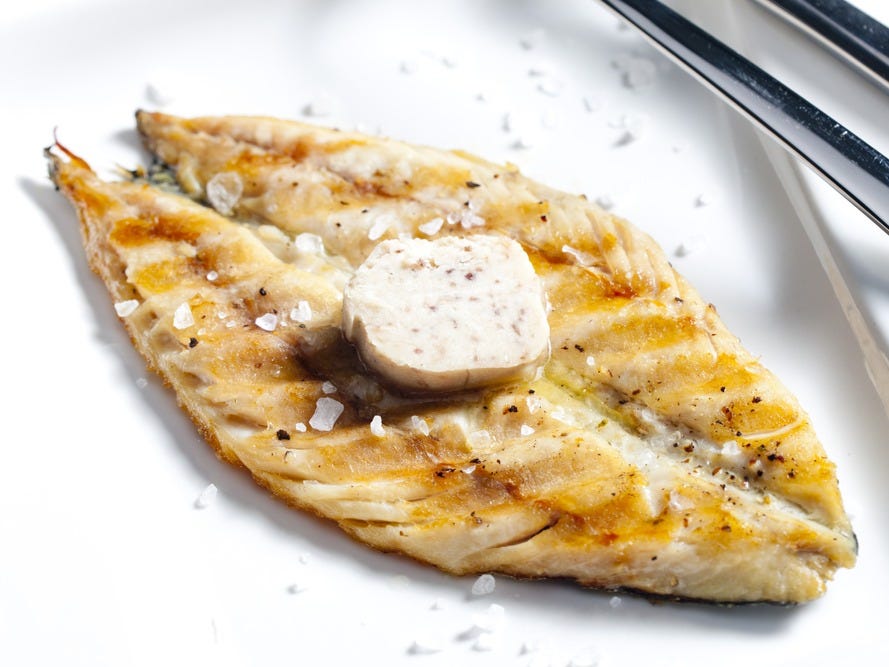 Heartier fishes, such as mackerel, cook well on the grill, according to Chris Scott, chef at the Institute of Culinary Education.

Mackarel skin is perfect for charring, he added.

“Mackerel is a favourite of mine,” Scott said. “I like how it’s firm, flavorful, and has a little fishy taste.”

Tofu soaks up a lot of flavour, making it perfect for grilling. 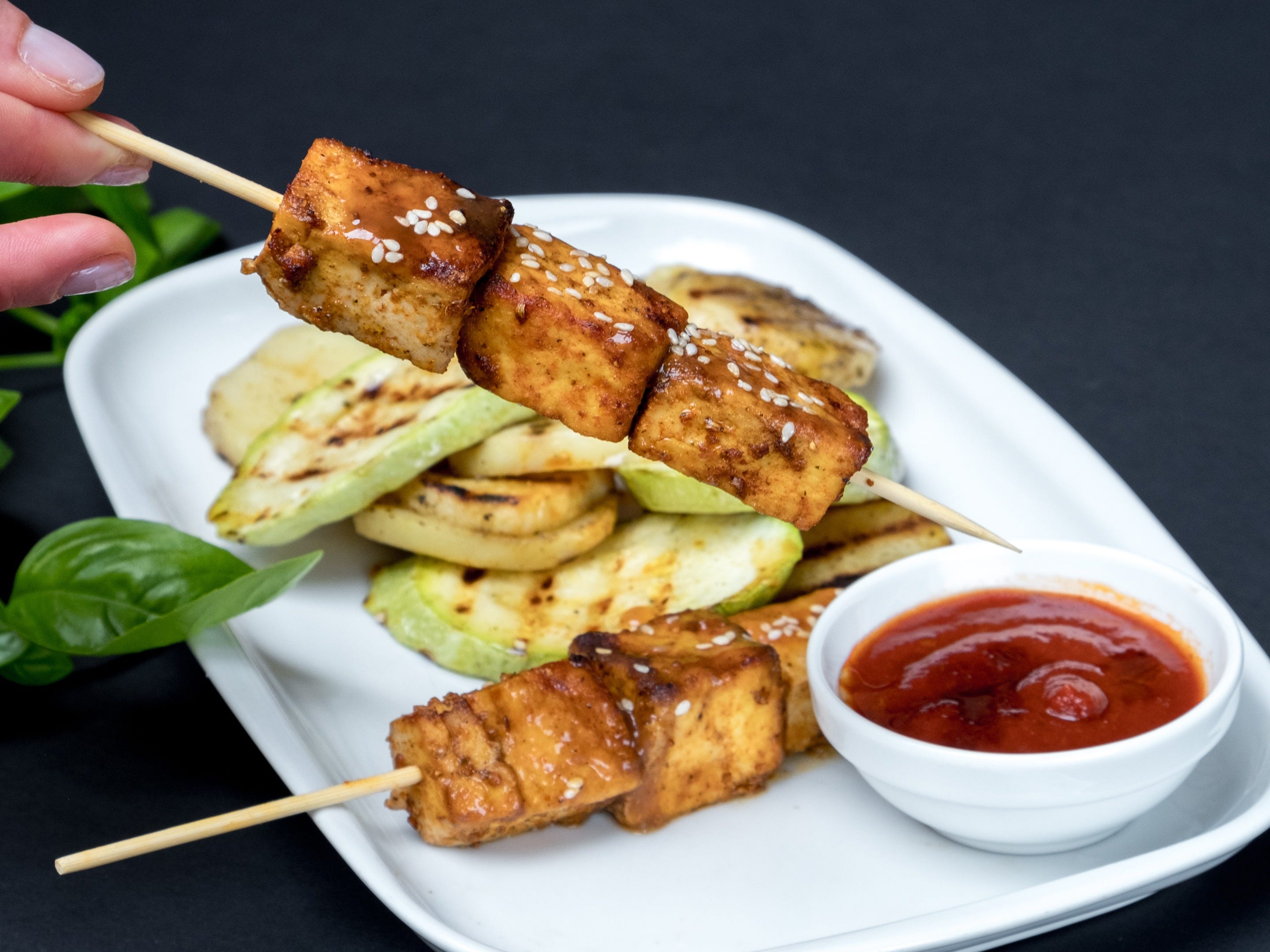 ShutterstockTofu can be marinated with soy sauce, garlic, and more.

If you’re vegetarian or vegan, there are a ton of grilling options still available at your disposal. One alternative that does really well on the grill is tofu, according to Scott.

Tofu can absorb a lot of flavour, he said, and you can use almost anything to marinate such as soy sauce, sesame oil, garlic, fresh herbs, and crushed tomatoes. Throw the tofu on the grill, let it get some char and smokiness, and it’s ready to go, he added.

“You can smash it and turn it into a vegetarian Bolognese, or slice it and add more crushed tomato and herbs and have an Italian-style summer tofu salad,” Scott told Insider.

Some fruits and vegetables, like zucchini squash, onions, and eggplant, do especially well on the grill. 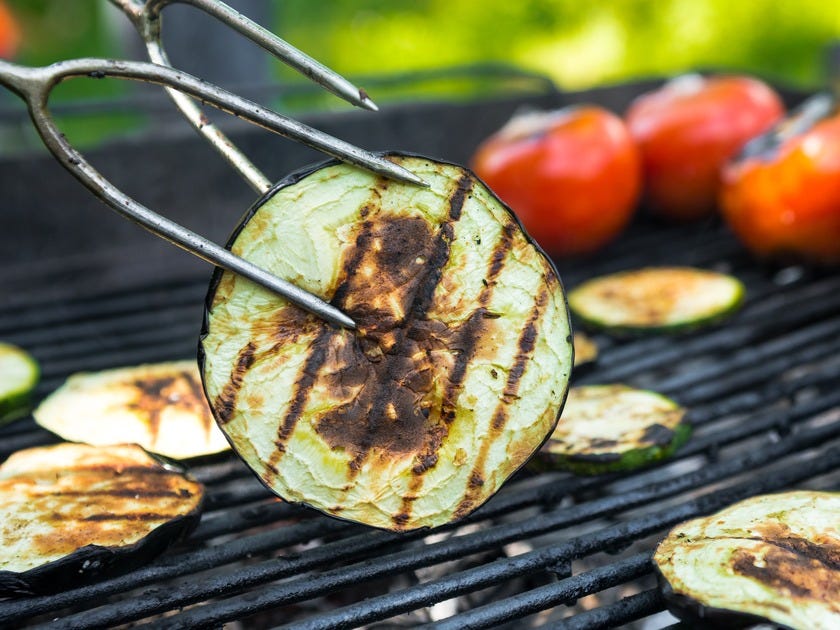 ShutterstockEggplant can develop a nice char.

When cooking vegetables, Scott said, just make sure you infuse them with flavour before putting them on the grill.

This can be done using dried herbs, dry rubs, wet marinades, or brines. 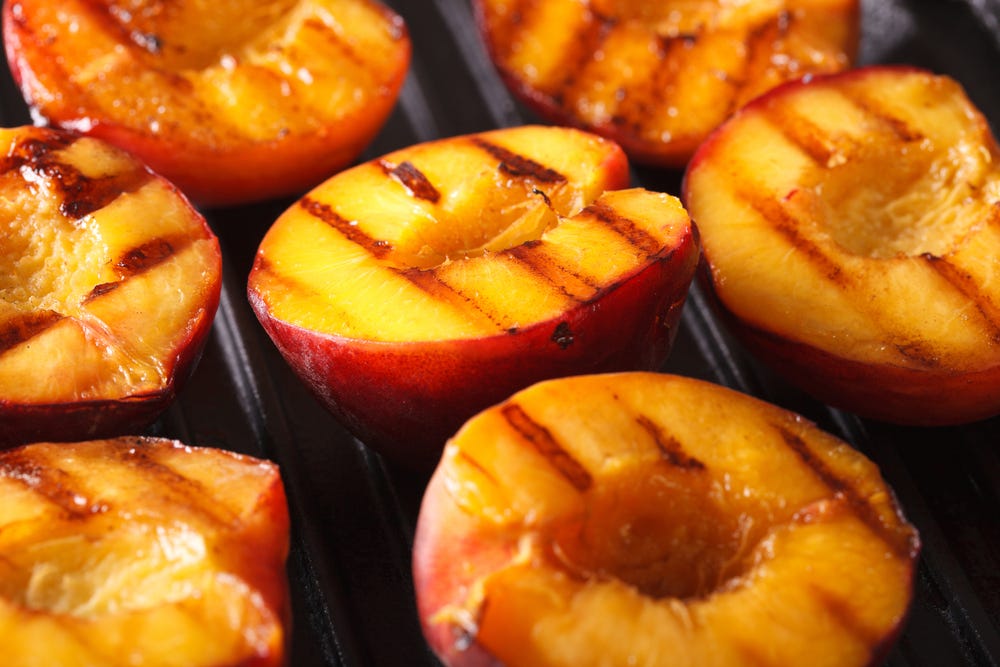 For a fruity option, you can marinate and grill peaches, Scott said. They develop a nice, smoky flavour when grilled.

“You can marinate peaches in brandy, brown sugar, and spices (like cinnamon, nutmeg and allspice), and put them on the grill with a drip tray underneath,” Scott told Insider. “With the juice you caught in the tray, you can reduce it into a smoked peach syrup to use on ice cream.”

On the other hand, filet mignon can be difficult to grill. 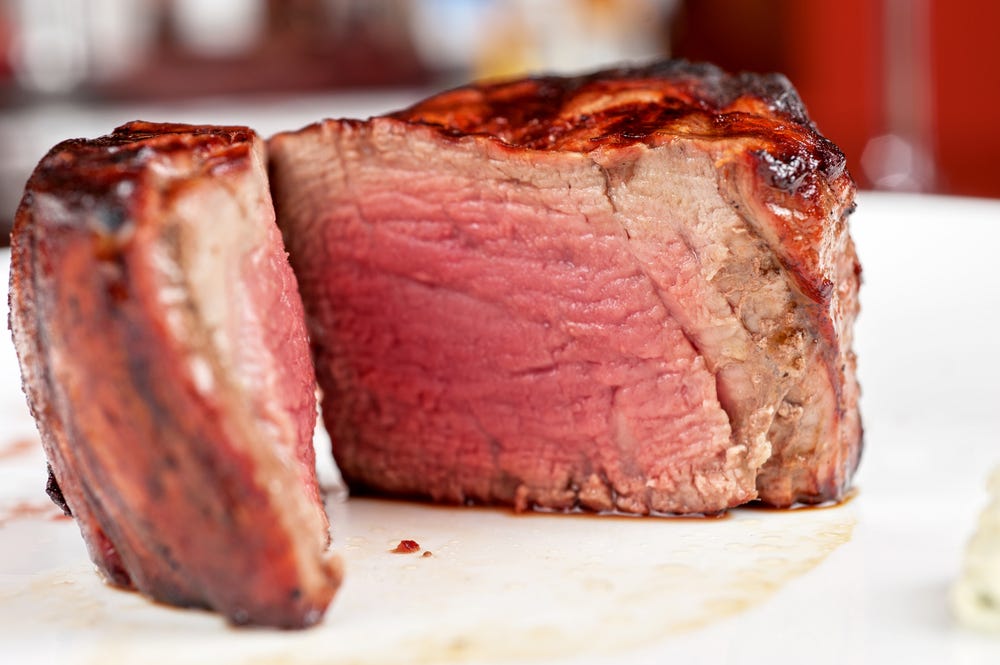 Filet mignon is a very lean cut of beef, so heat control is an issue when grilling, as it’s not a sure thing every time, Pettersen said.

In place of filet mignon, try grilling up some flank steaks, Scott recommended. He said these grill wonderfully and can handle a lot of heat.

The vegetables in shish kebabs sometimes burn easily on the grill. 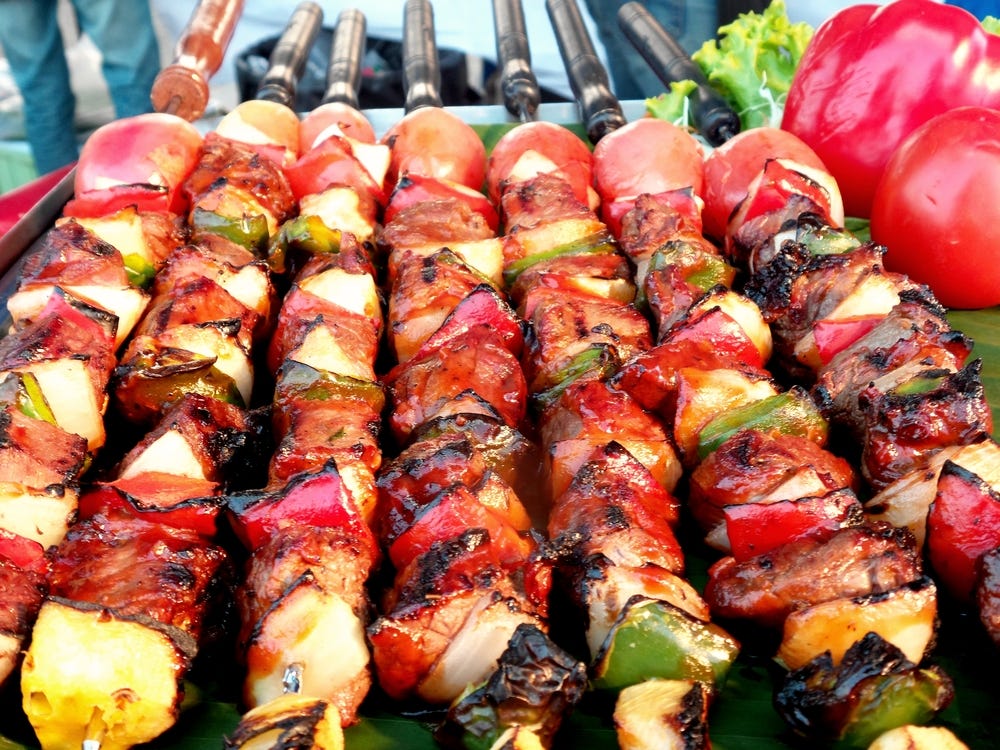 ShutterstockSometimes vegetables can burn while the meat cooks.

Shish kebabs, which usually consist of meats and vegetables on a skewer, can be tricky to cook evenly. Oftentimes the vegetables can get burnt, Pettersen said.

If you still want to break out the skewers, try sticking some shrimp on them instead of beef or chicken, he added. Shrimp is very tender and can cook quickly on a grill.

“Beware if you try to grill them without a skewer, as they can fall through the grates of the grill when you turn them,” Pettersen said.

Pork chops are a lean meat, so they can easily dry out on the grill. 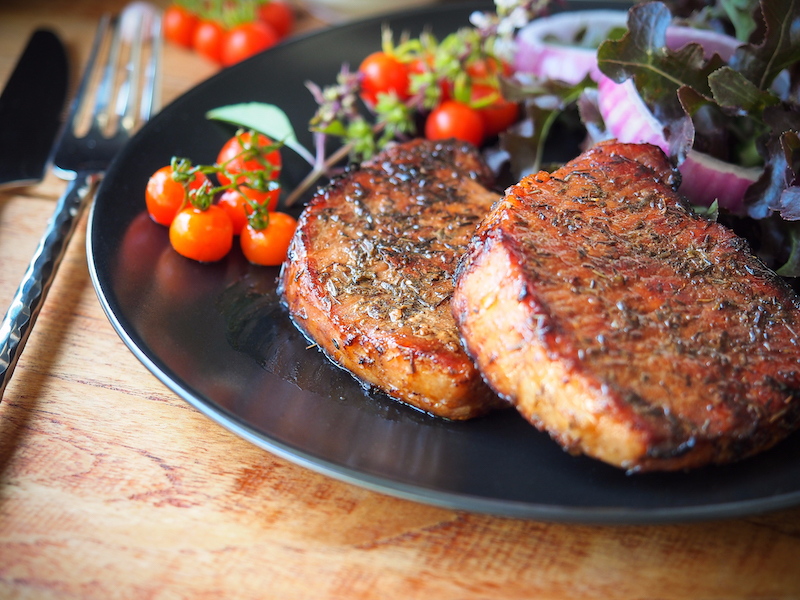 pada smith/ShutterstockYou may be better off cooking pork chops in an oven.

Pork chops are typically lean and can dry out quickly. Thin pork chops especially tend to cook too quickly before they have a chance to develop a nice crust on the outside, Pettersen added.

If you’re craving white meat, you may want to grill chicken instead, he suggested, since it’s really versatile and simple to grill.

“If you properly marinate chicken, you can ensure a tender, juicy, flavorful dish,” Pettersen told Insider. “There’s a reason people say chicken is the easiest food to prepare on the planet.”

Flaky fish can fall through the grill slats. 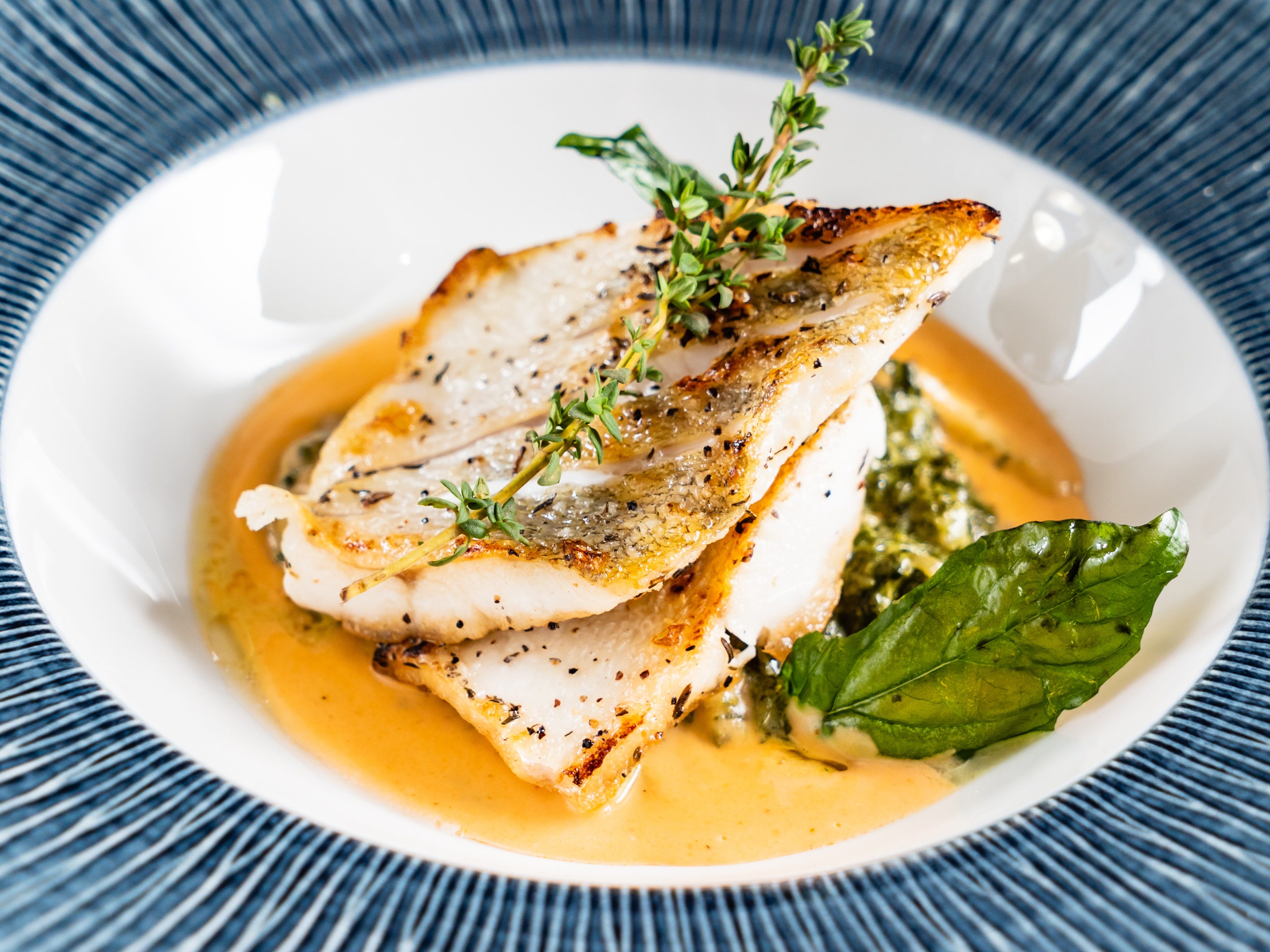 A flaky fish, such as flounder or cod, is challenging to grill because it is so delicate, Pettersen told Insider. Because of this, it can easily fall through the grill slats.

Scallops are a great alternative if you still want to grill some seafood, Pettersen said, since grilled scallops are crisp on the outside, yet tender on the inside.

“They are also super easy to figure out how long you should cook them,” he told Insider. “If scallops are opaque, they are done – so simple.”

Tomatoes are so delicate that they can easily fall apart on a grill. 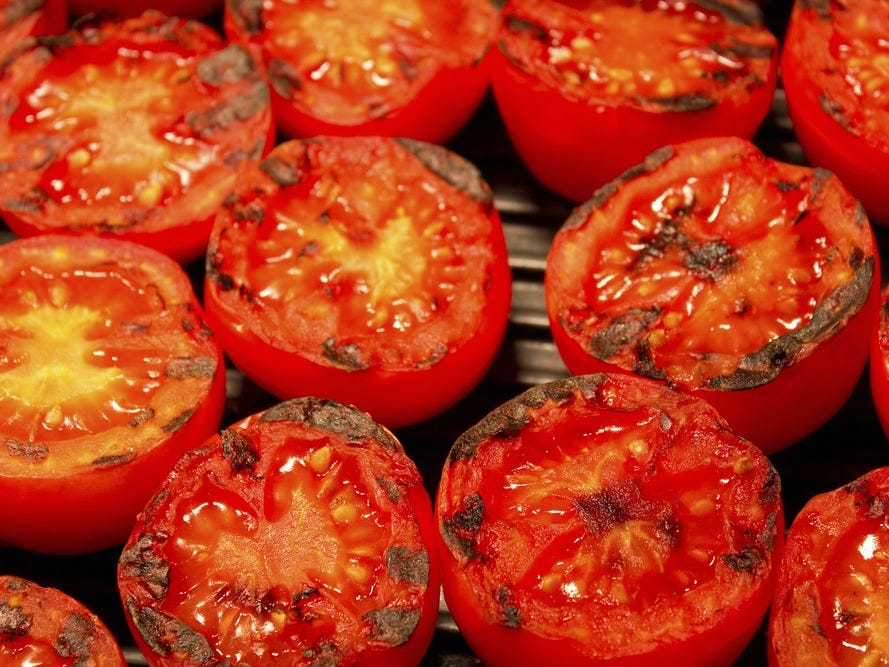 ShutterstockYou may want to roast tomatoes instead.

Tomatoes are another delicate food that can easily stick to the grill and fall apart, Pettersen told Insider.

Instead, Scott said, you may want to grill root vegetables, such as carrots or beets. They’re sturdy and they grill best when they’re placed on the upper grilling rack, he added.

Grilled watermelon can be messy and sort of dry. 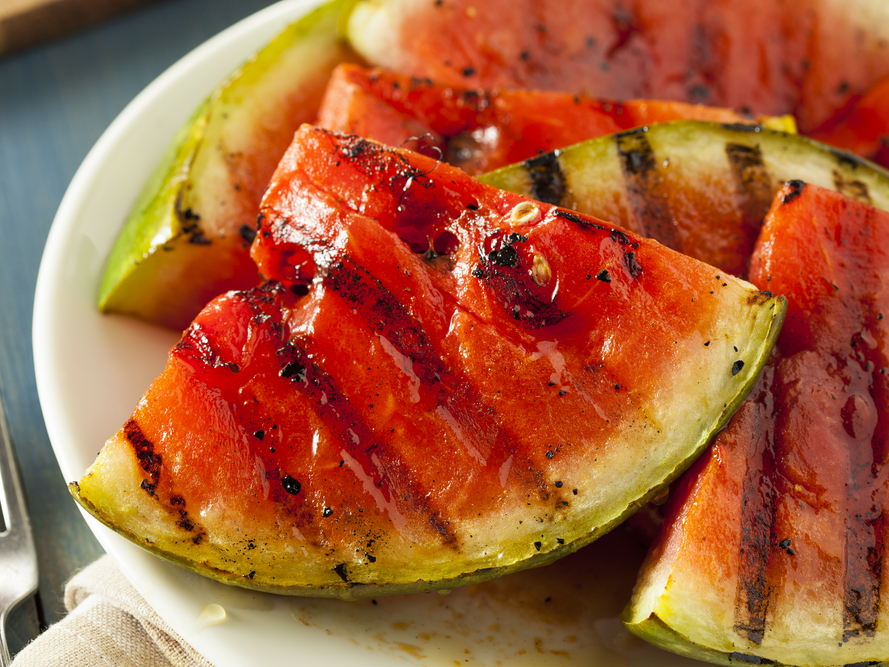 ShutterstockWatermelon won’t be as juicy if you grill it.

“For me, watermelon is best enjoyed as nature intended,” Mehta told Insider. “When you grill it, the watermelon loses its juiciness and, therefore, has an overpowering smoky flavour … “

Instead, opt for grilled pineapple slices, which can be used in savoury and sweet dishes, Scott said.

10 simple summer desserts you can make on a grill