Ben Affleck sent a video to a woman who unmatched with him on dating app Raya, according to a viral TikTok 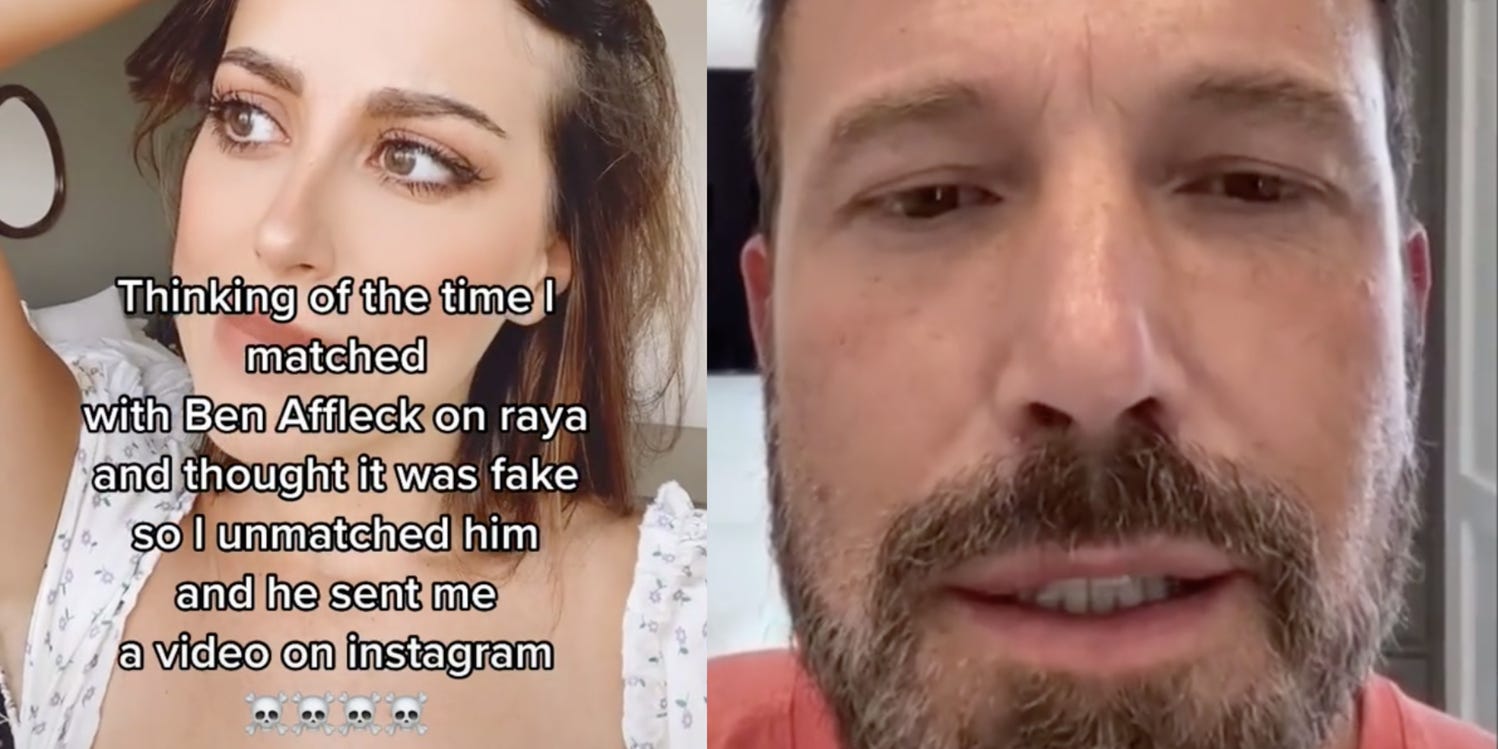 A woman on TikTok went viral after she said Ben Affleck sent her an Instagram direct message (DM) asking why she unmatched with him on a dating app. The woman, Nivine Jay, said she and Affleck matched on Raya, an exclusive dating app known for its celebrity users.

Jay, an actress and model, recorded herself looking regretful and added text that said, “Thinking of the time I matched with Ben Affleck on Raya and thought it was fake so I unmatched him, and he sent me a video on Instagram.” The video then cuts to a man that appears to be Affleck asking, “Nivine, why did you unmatch me? It’s me.”

Jay posted the video to TikTok on Sunday and it went viral after it was posted on Twitter. As of Tuesday morning, the video has been viewed over four million times on TikTok and has over 525,000 likes.

Insider could not independently verify that Jay and Affleck had matched on the app and that he sent the video directly to her. Jay did not immediately respond to a request for comment.

Many of the comments on the original video were joking at Affleck’s expense, while others expressed disbelief. “The way he said ‘it’s me,’ my soul would have left my body,” one commenter said. Jay responded to the comment, saying, “confirmed my soul did leave my body.”

Raya is one of the most popular dating apps for the rich and famous. Users must go through a rigorous application process to join the app. Only 8% of applicants are accepted to the platform, according to The New York Times. Cara Delevigne, Drew Barrymore, Amy Schumer, John Mayer, Kelly Osbourne, and Trevor Noah are among the stars who have reportedly been spotted using Raya, as Insider’s Hillary Hoffower previously reported.

Page Six first reported in 2019 that Affleck was using Raya after he settled his divorce from actress Jennifer Garner in 2018. He then remained publicly quiet about his dating life before his widely-discussed relationship and breakup with his now ex-girlfriend, Ana de Armas, whom he reportedly met while filming the upcoming movie “Deep Water.” He was recently spotted with his ex-fiancé Jennifer Lopez, who announced her separation from Alex Rodriguez in April.

A representative for Affleck did not immediately respond to Insider’s request for comment.