Check Out These Renderings Of An 'iPhone Air' Apple’s unveiling of the iPad Air showed that the company is still able to pull off radical feats of engineering to trim the fat from its already impressively thin tablets.

Fuse Chicken is the hardware design company behind the Une Bobine, a beautifully simple charging dock for the iPhone. They’re currently trying to raise $US20,000 for the Une Bobine on Kickstarter — you can find their page for it here.

To raise awareness of the Une Bobine, the Fuse Chicken team decided to show off what their designers can do by creating a mockup of what they’re calling the ‘iPhone Air.’

It’s pretty awesome — basically, it’s what the iPhone 5S would look like if Apple were able to radically redesign it as they did the iPad Air.

One of Apple's top priorities with the iPhone is ensuring that it can be used one-handed. That's why the iPhone 5 screen was made longer but not wider. While it would be the same size as the iPhone 5S, the iPhone Air's screen would increase in size to 4.9 inches. By removing as much of the bezel as possible, the iPhone Air would offer the advantages of a big-screen phone with few of the drawbacks. Rather than building Touch ID into the traditional home button, the iPhone Air would have it integrated into the bottom bezel. You can see the Touch ID placement a bit better at this angle. The concept also gets rid of the 'clicky' volume and silent buttons in favour of ones based on touch. This is the one change we think the concept could do without. Here's a video of their renderings -- it makes their iPhone Air concept look really great. 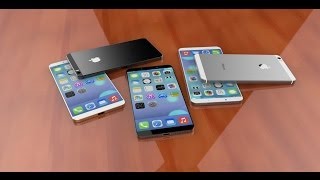