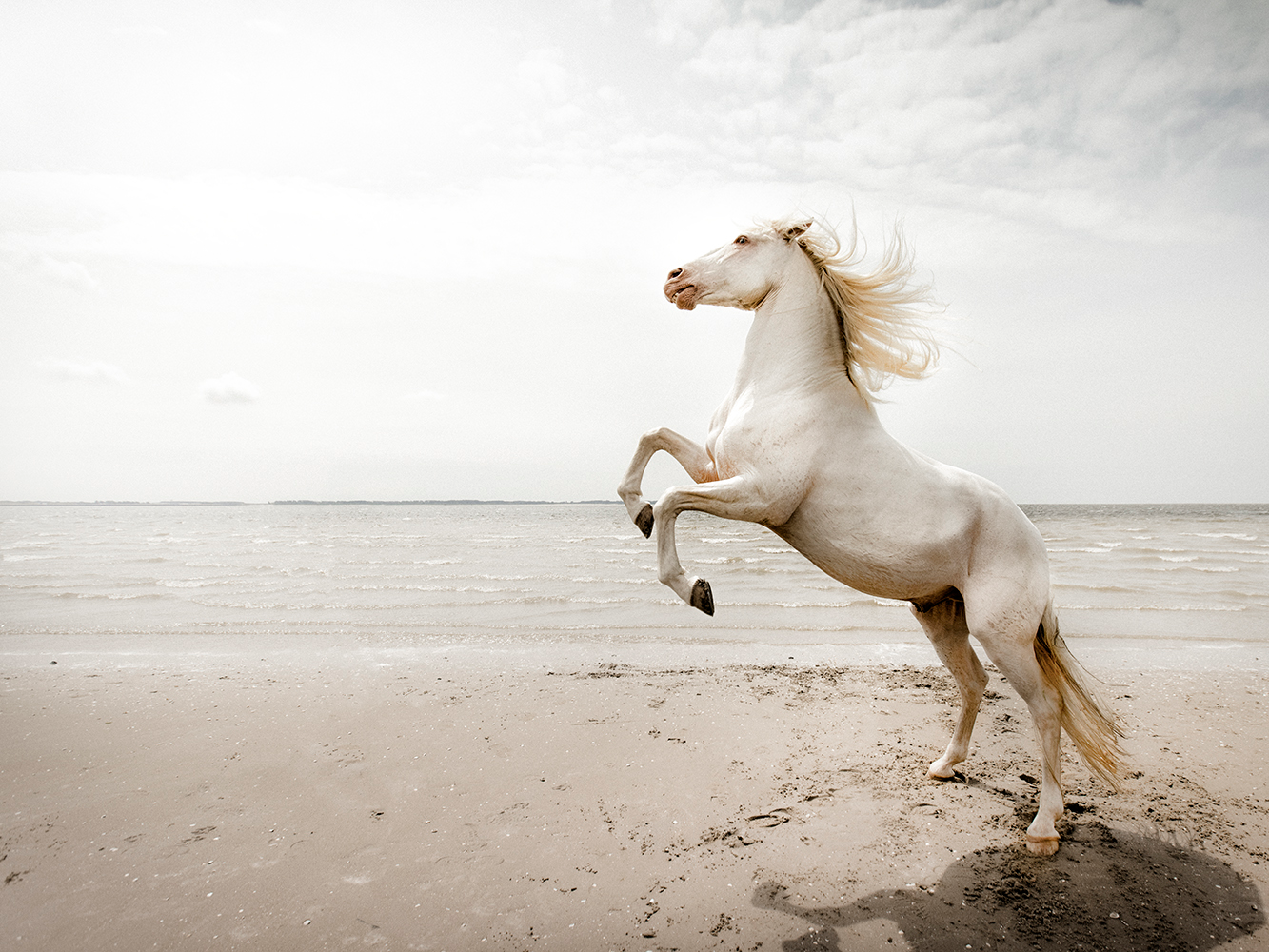 Nature is all around us. It’s the sky above our heads, it’s the foliage that changes with the seasons, and it’s the wildlife we share it all with.

Photographers all over the world are capturing moments in nature that make us rethink how we see the world, from bears fighting in Alaska to a volcano erupting in Hawaii.

This Earth Day, take a look at some of the most captivating pictures of nature.

The right light can make greenery pop, like this forest in Colorado. This picture was taken in Colorado near the San Juan Mountains, and the photographer, Alex Noriega, calls the image “Limelight.”

The rainbow captured in this photo adds a magical element to the greenery down below. This photo was taken on the island of Kauai, which is known for its tropical rainforest.

But trees can be even more captivating when they change colours during the fall. 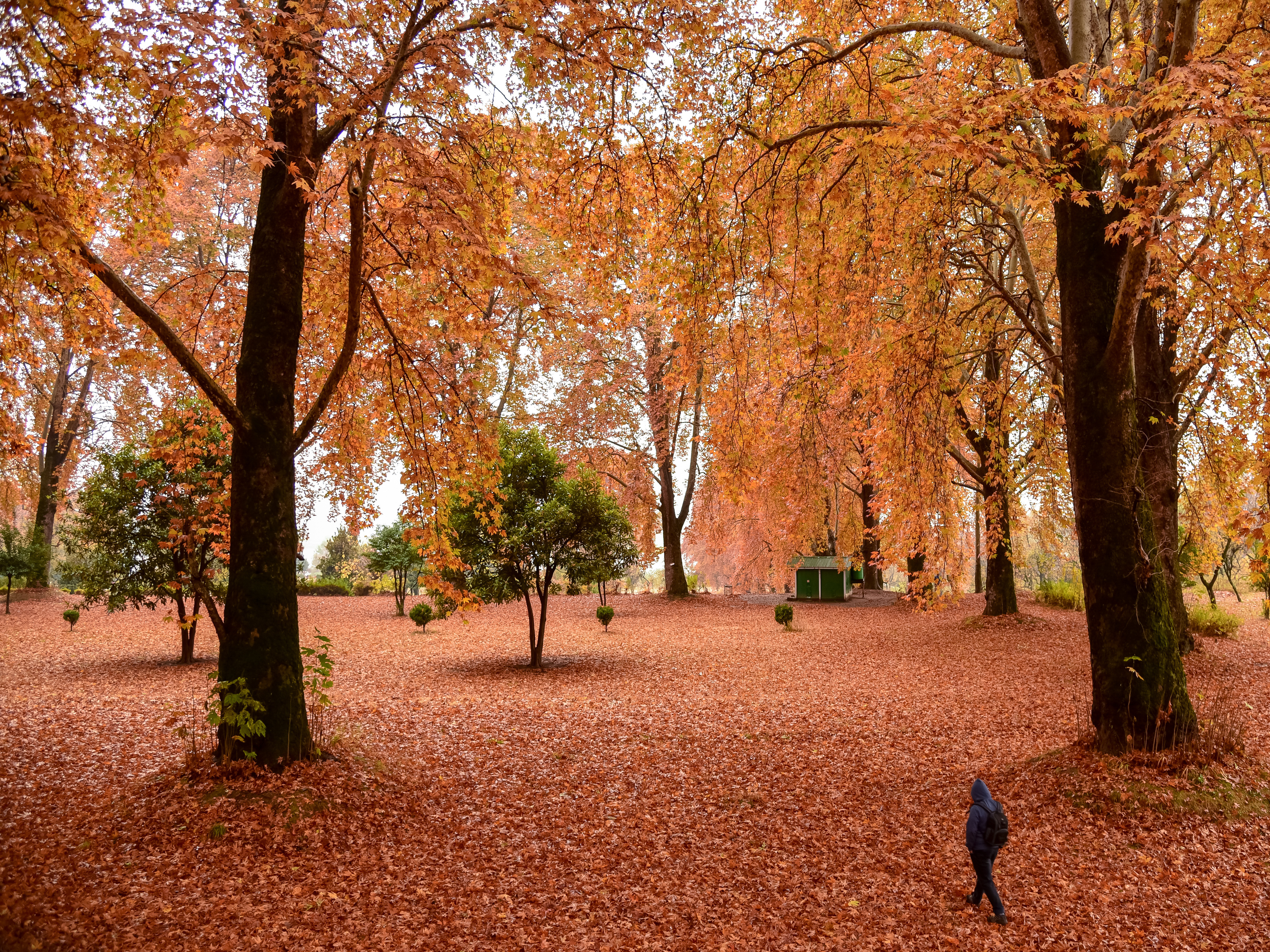 The trees in the Kashmir Valley in India change drastically during the fall.

In the winter, trees are dusted with snow, like this forest in the Yellowstone National Park. In Yellowstone National Park, the most common tree is the lodgepole pine, which covers 80% of the park.

These trees in Mount Rainier, Washington, are even beautiful when hidden under layers of snow. Courtesy of Alex NoriegaTrees in Washington.

While some trees grow together in a forest, some stand alone, like this one in Aruba. 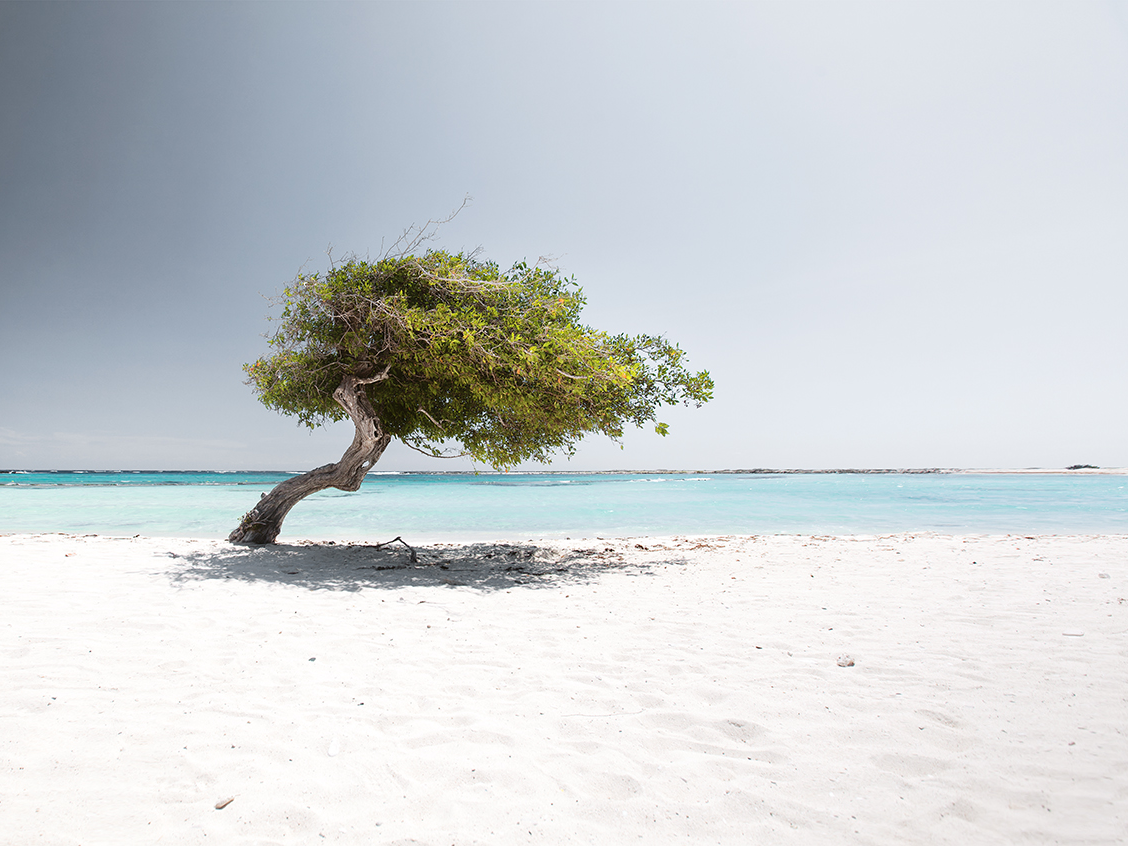 The photographer, Claire Droppert said, “This Caribbean gem provides an abundance of opportunities to capture the quintessential feeling of silence in a unique, diverse and stunning landscape Aruba has to offer.”

Beaches also have the ability to capture the world’s natural beauty. 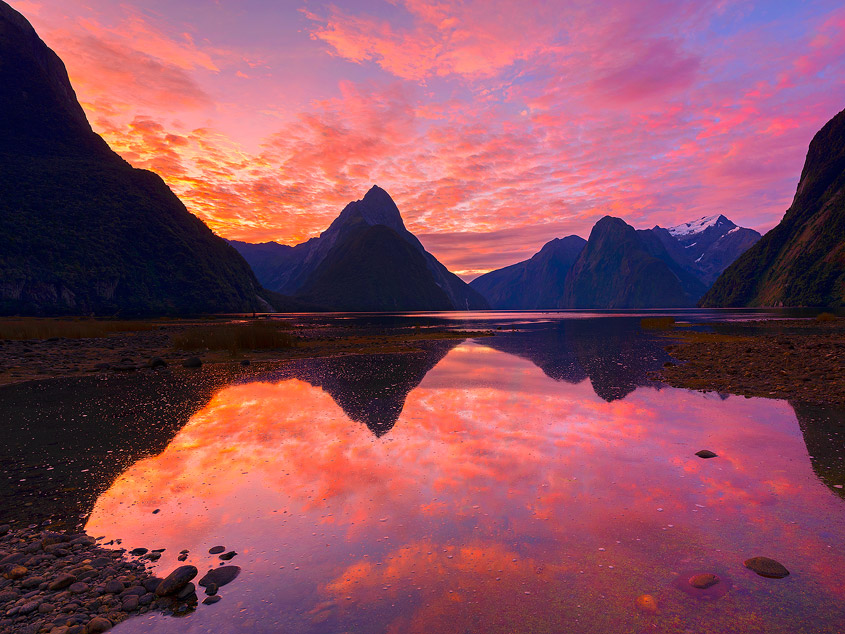 “What an amazing sunset this was,” photographer Mark Grey said. “As the tide raced in I kept relocating my tripod further and further back until the light peaked and I captured this amazing moment.”

Sometimes beach landscapes can seem completely out of this world, like this one in Australia. 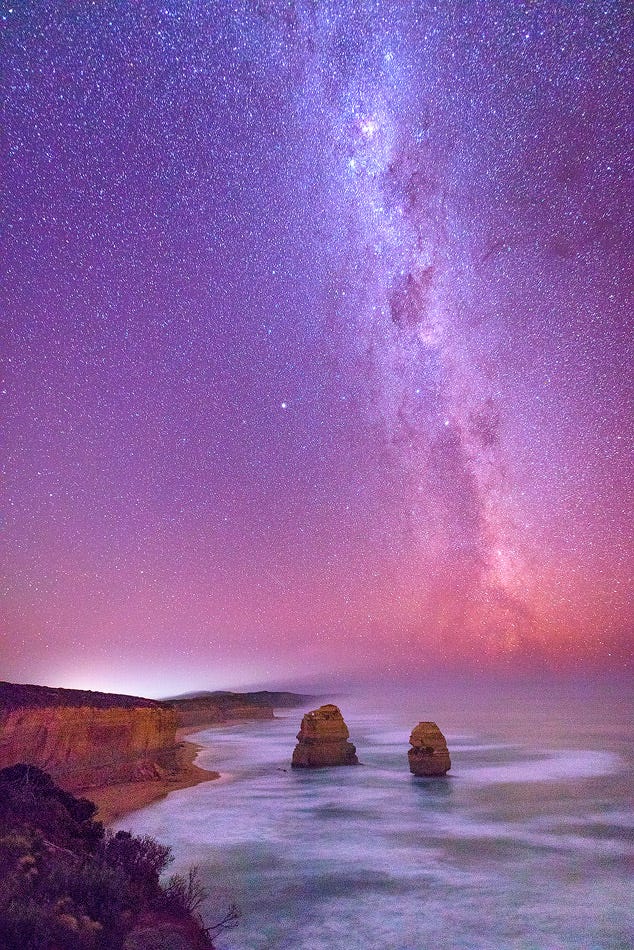 “I spent a couple of hours working the scene in the dark and finally settled on this unique photo of the 12 Apostles with all the glory of the Milky Way above,” photographer Grey said. “When reviewing the photograph, I was pleasantly surprised to have captured the colours of a suspected Aurora on the horizon, or perhaps it was just light reflecting off the lingering sea mist? I guess we will never know.”

Meanwhile, this vertical panorama captures the beauty of what’s under the water’s surface.

“Once we arrived at Hardy Reef we completed a number of laps of the area at different altitudes and I got to work, capturing a number of vertical and horizontal panoramas,” Grey said. “This was my first time shooting vertical panoramas from a helicopter. As expected, the biggest challenge was avoiding the rotors in the top of the frame. I had to lean out of the chopper quite a way in the end but nailed this unique capture of such an incredible part of Australia.”

Mountains are another popular focal point in nature photography — and for good reason. 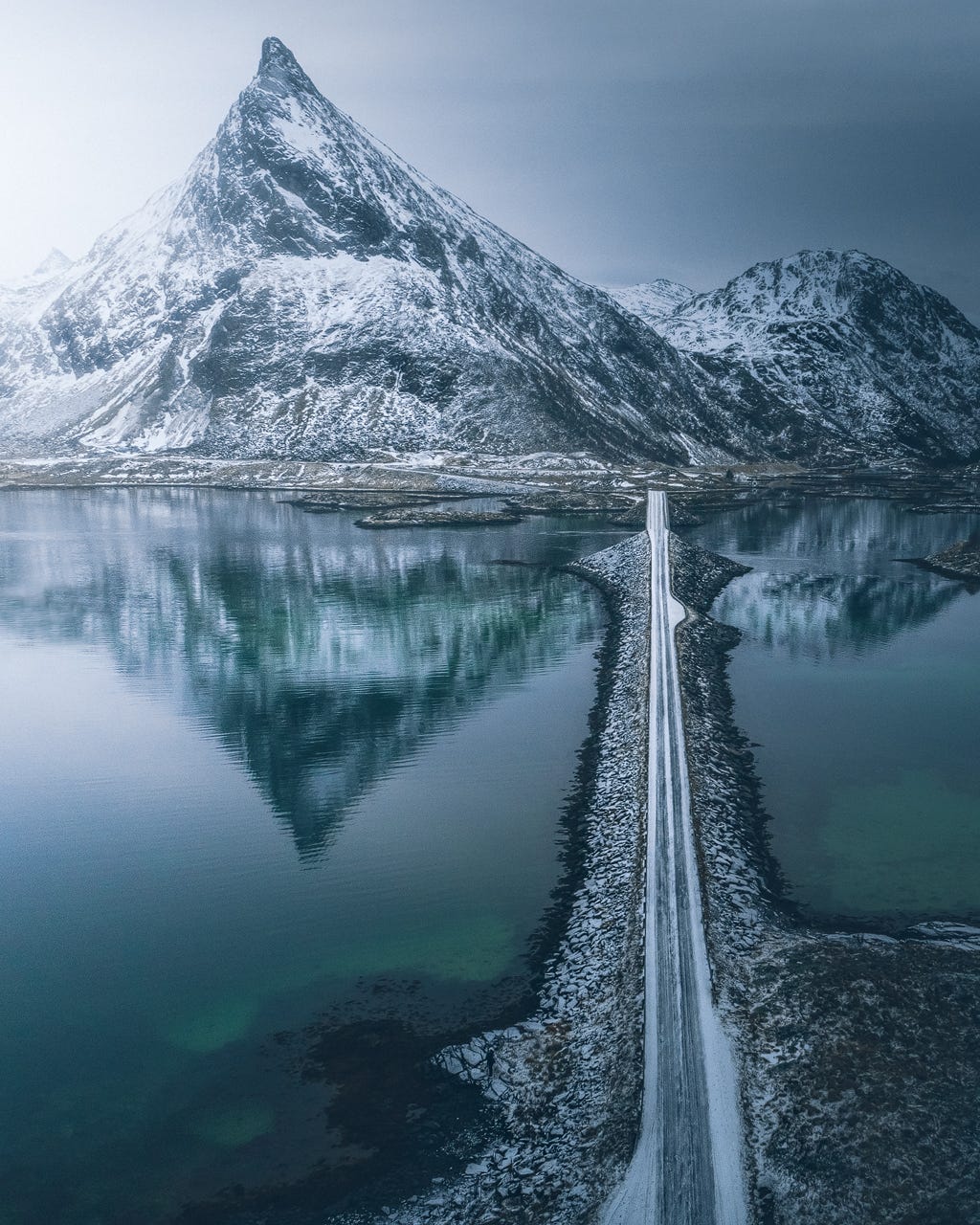 Courtesy of Stian KloMountains in Norway.

This photo was taken at the Fredvang Bridges in Norway where the massive mountains seem to tower over the water and the road.

Up close, the Sierra Nevadas seem to be engulfed in a sea of fog and clouds. The Sierra Nevada mountain range stretches along the eastern border of California.

Even the mountains in the Arctic make for gorgeous nature photography. 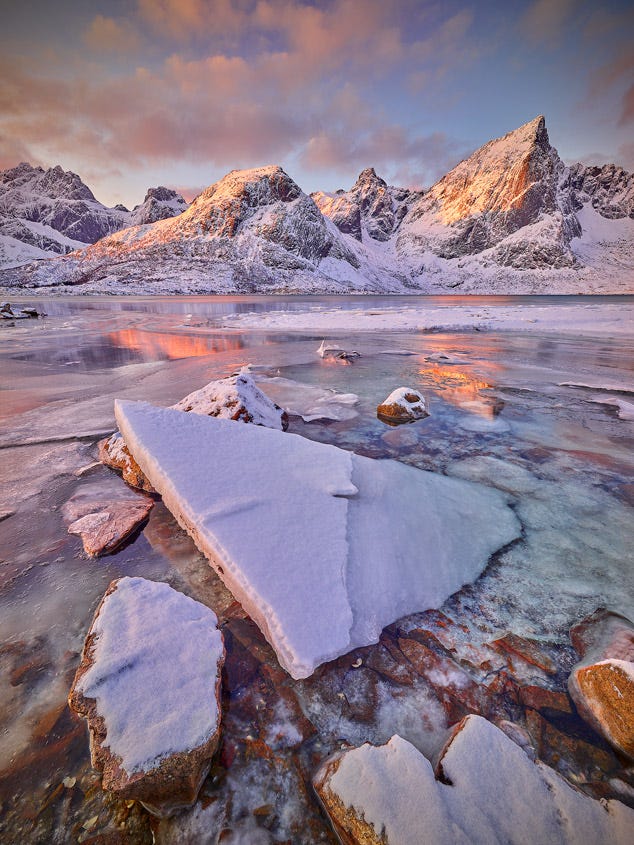 “One of the biggest challenges of shooting the Arctic is just how changeable it is, nothing stays the same for very long,” Grey said. “The following day I drove past and stopped in for a look, this scene had changed completely. The foreground ice had disappeared, most likely destroyed or relocated by the tidal movements during the night.”

Some land formations like the famous pitchfork dune in the Namibia desert can also be a breathtaking example of nature at its best. 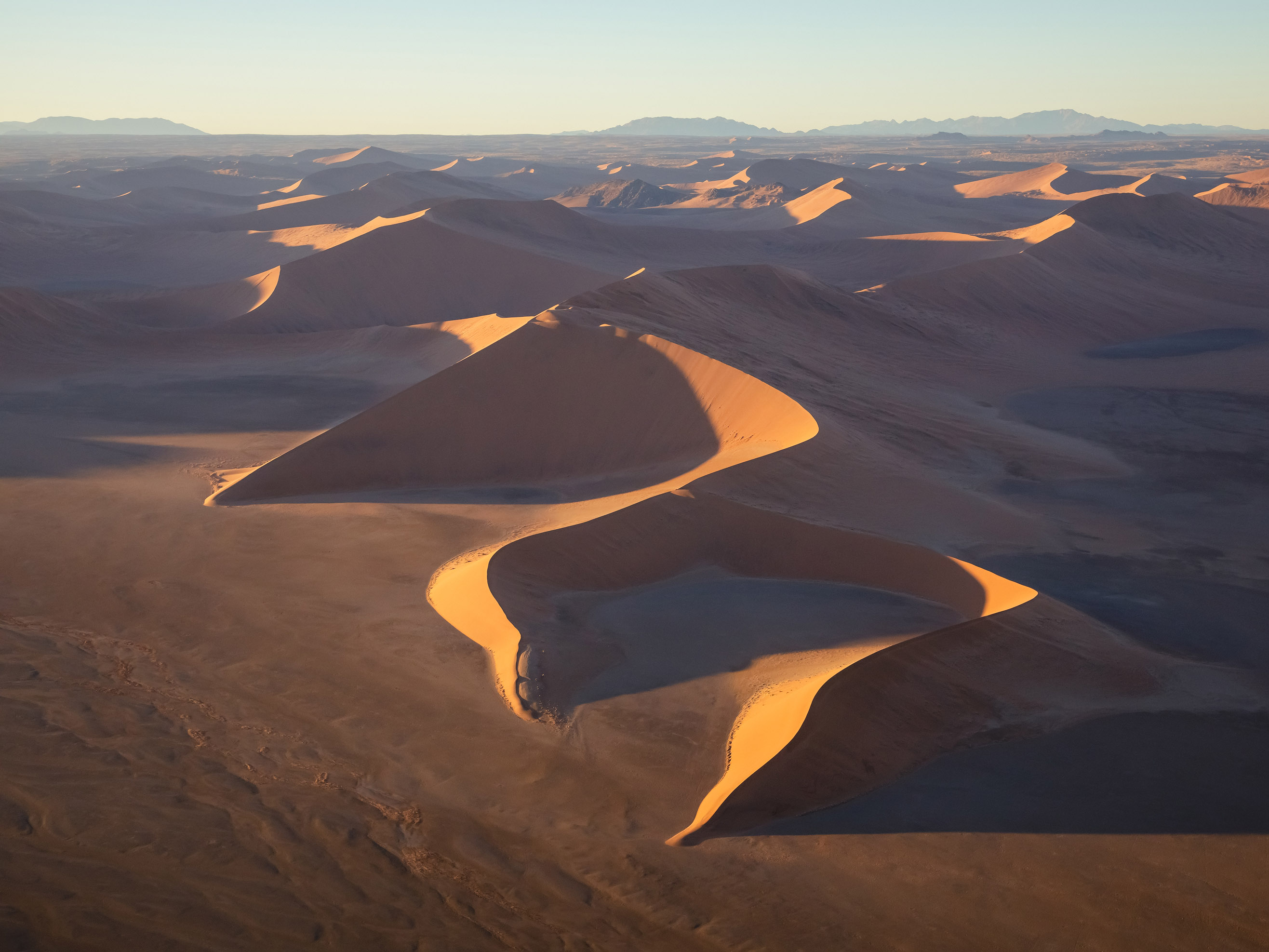 This photo was taken at sunrise in the Sossusvlei.

The Coyote Buttes are a breathtaking geological feature on the Utah and Arizona border. 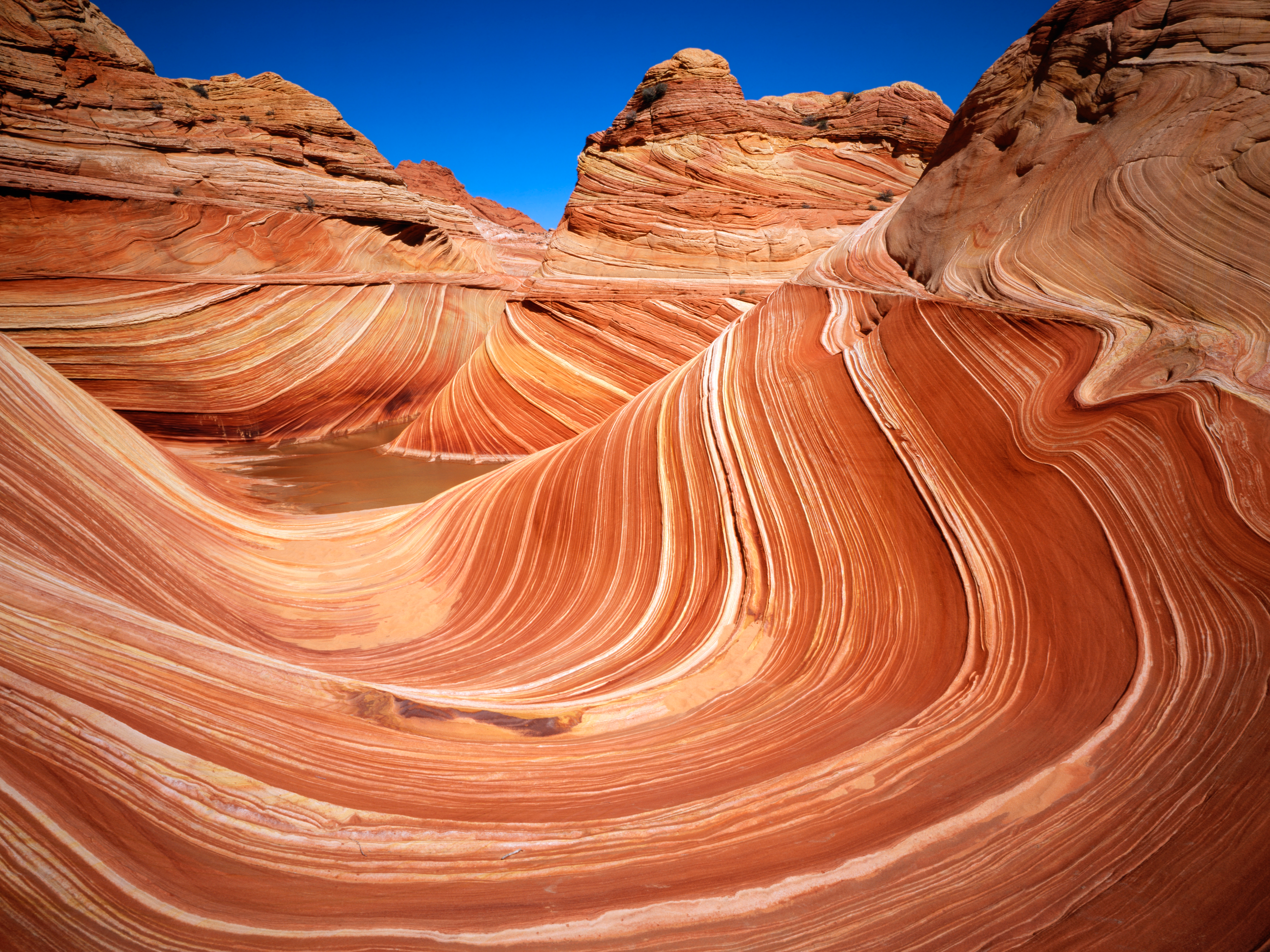 The Coyote Buttes are known as “The Wave” because of the undulating red and orange rock formations. While it’s a popular tourist destination, only 20 visitors are allowed into the region per day to protect its natural beauty.

The Pinnacles in Australia are a natural wonder of the world. 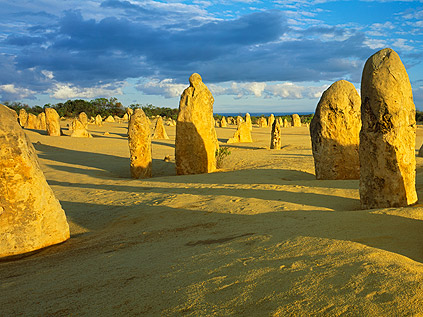 The Pinnacles is a rock formation made of limestone in the Nambung National Park in Australia. The 16-foot-tall structures were formed over 25,000 years ago and now attract thousands of tourists each year.

“I was immediately drawn to this group of rocks and captured a number of different angles,” photographer Grey said. “This shot was my favourite and if you look very carefully you can just see the ocean in the distance.”

Nature is filled with land formations, mountains, and trees, but they are also filled with animals that call these landscapes home. 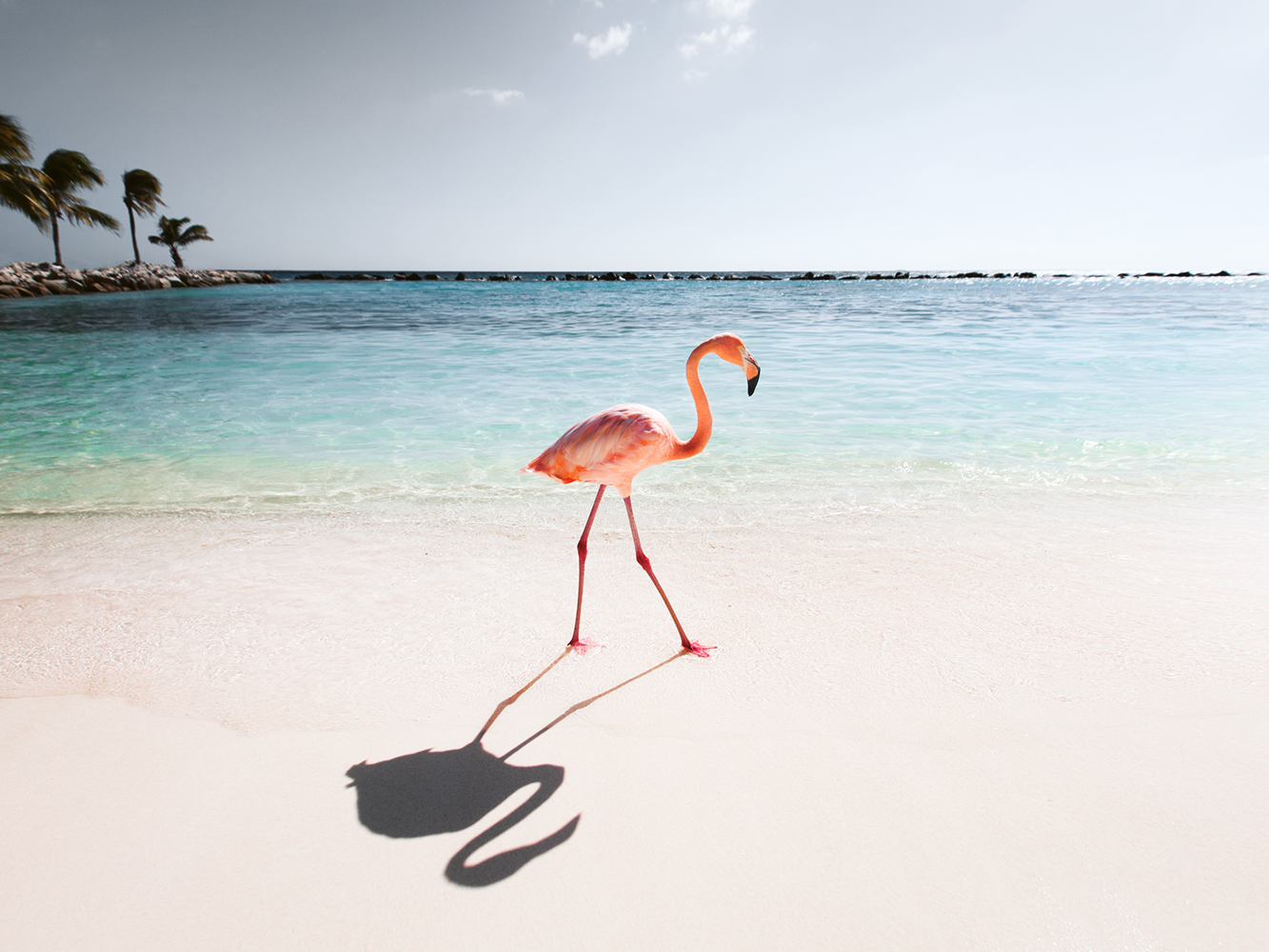 Courtesy of Claire DroppertFlamingo in Aruba.

“My glamorous model waited patiently for me to capture his perfect elegance,” photographer Claire Droppert said.

Polar bears, for example, are known as the lords of the Arctic. 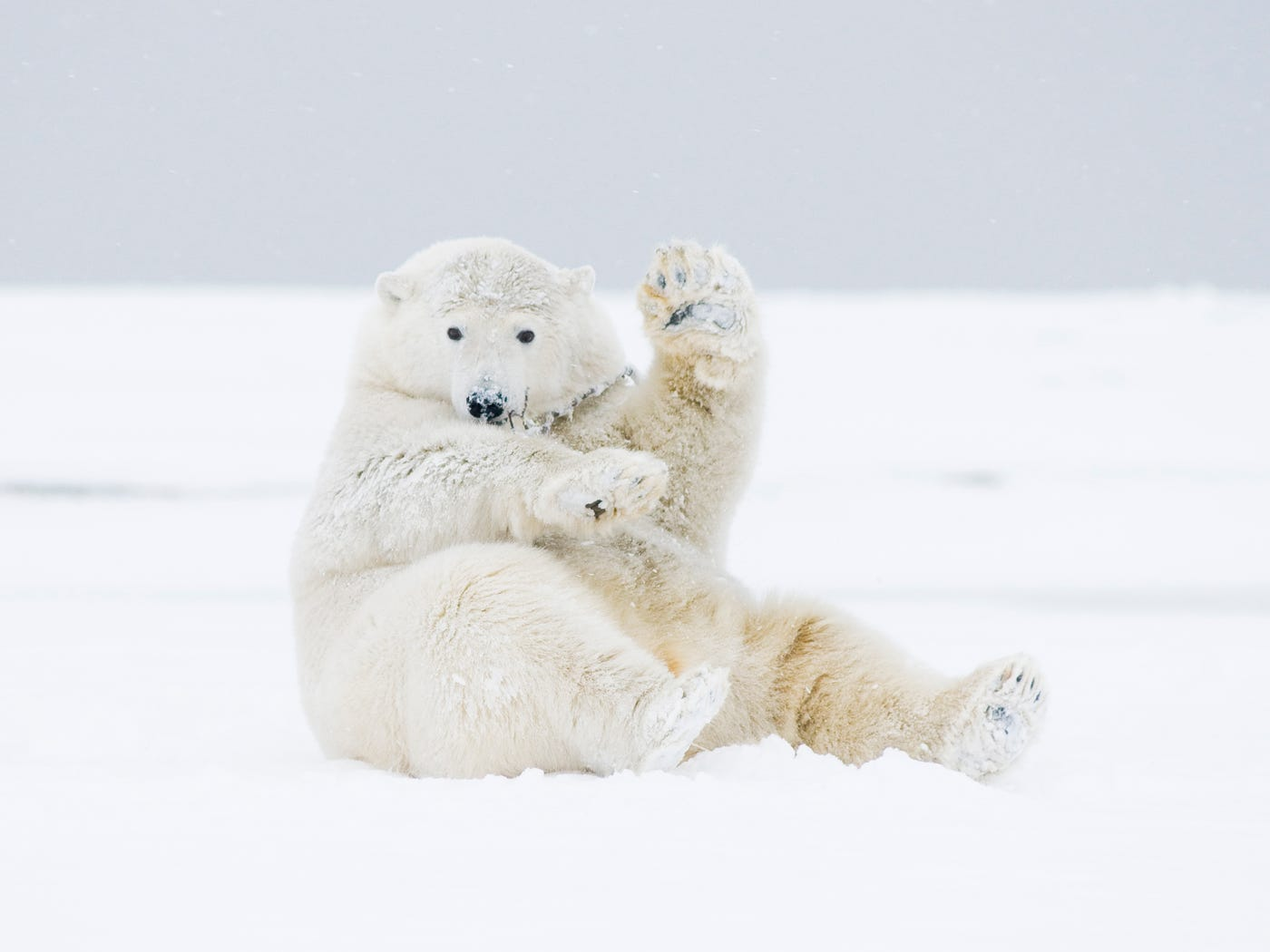 In this perfectly timed photo, it appears the polar bear is waving to the camera. 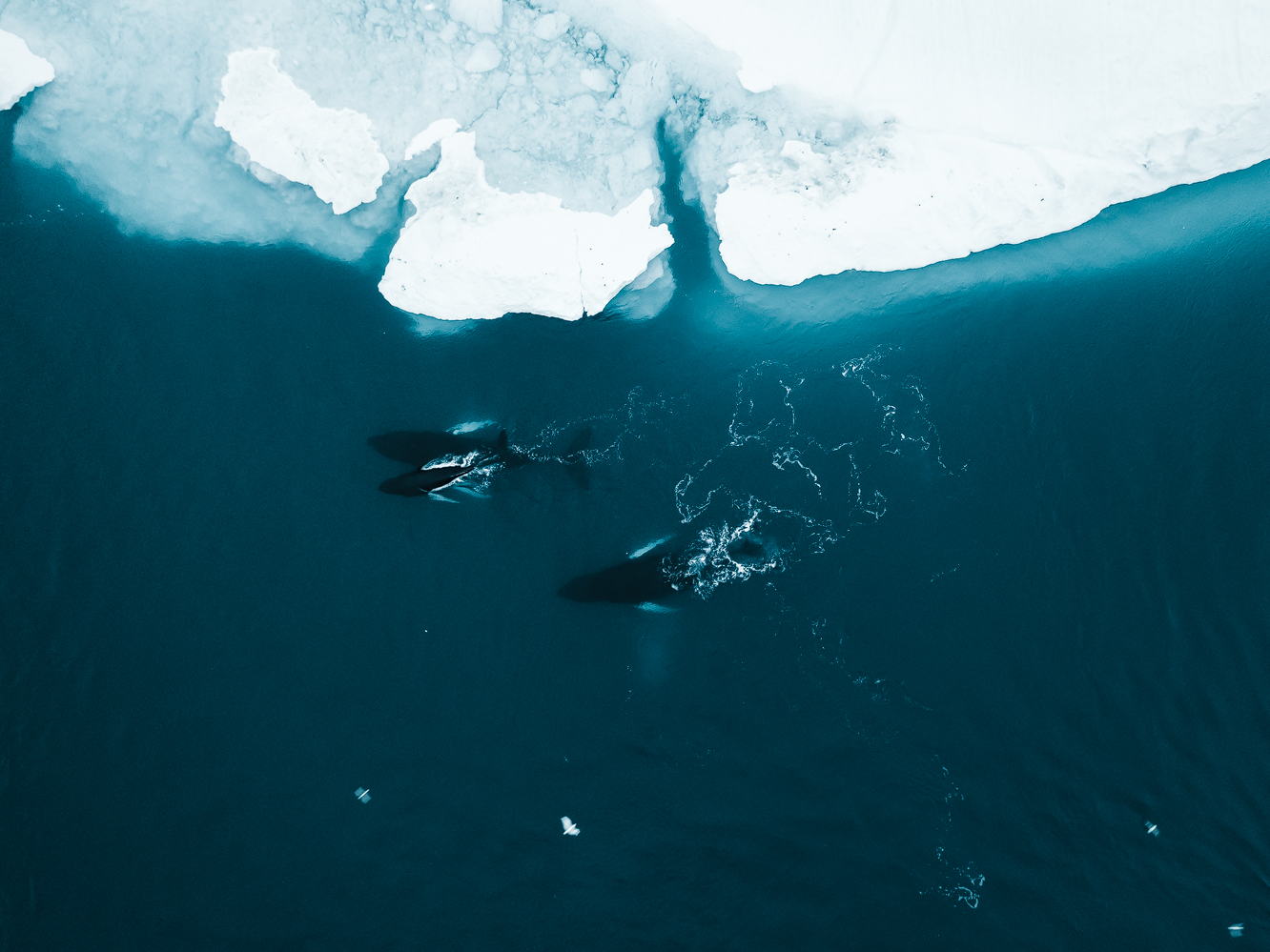 Courtesy of Stian KloWhales in Greenland.

These whales are swimming off the coast of Ilulissat Icefjord, Greenland, which has been declared a UNESCO World Heritage Site.

While some animals get along harmoniously in nature, others fight for survival. 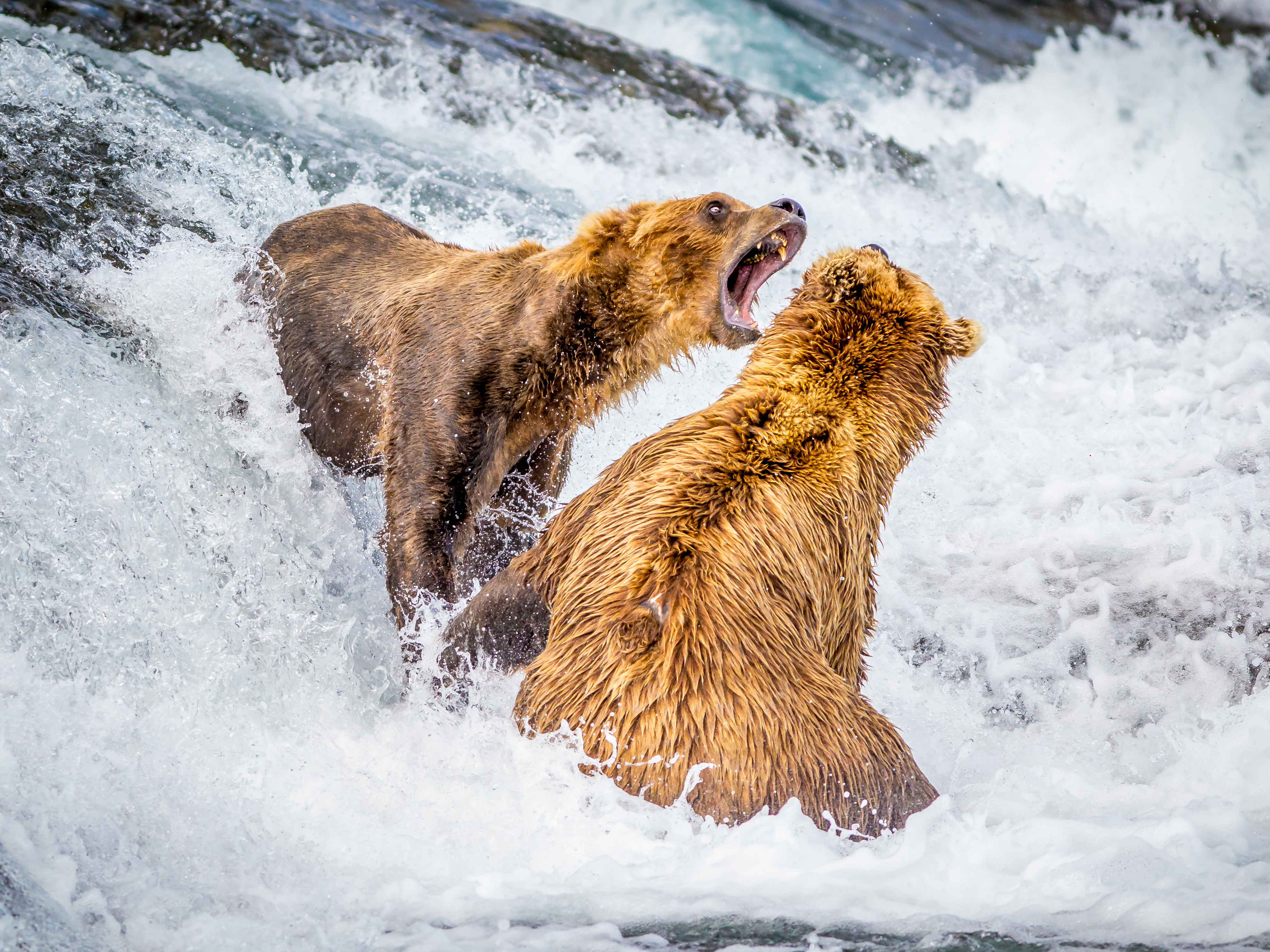 These two bears are fighting for food in the McNeil River in Alaska.

It’s survival of the fittest for some, like these two tigers. These two Siberian tigers in Gelände, Sweden, are fighting for the attention of a female.

Some nature photographers use animals to capture emotions. This majestic horse, for example, is meant to represent anger. 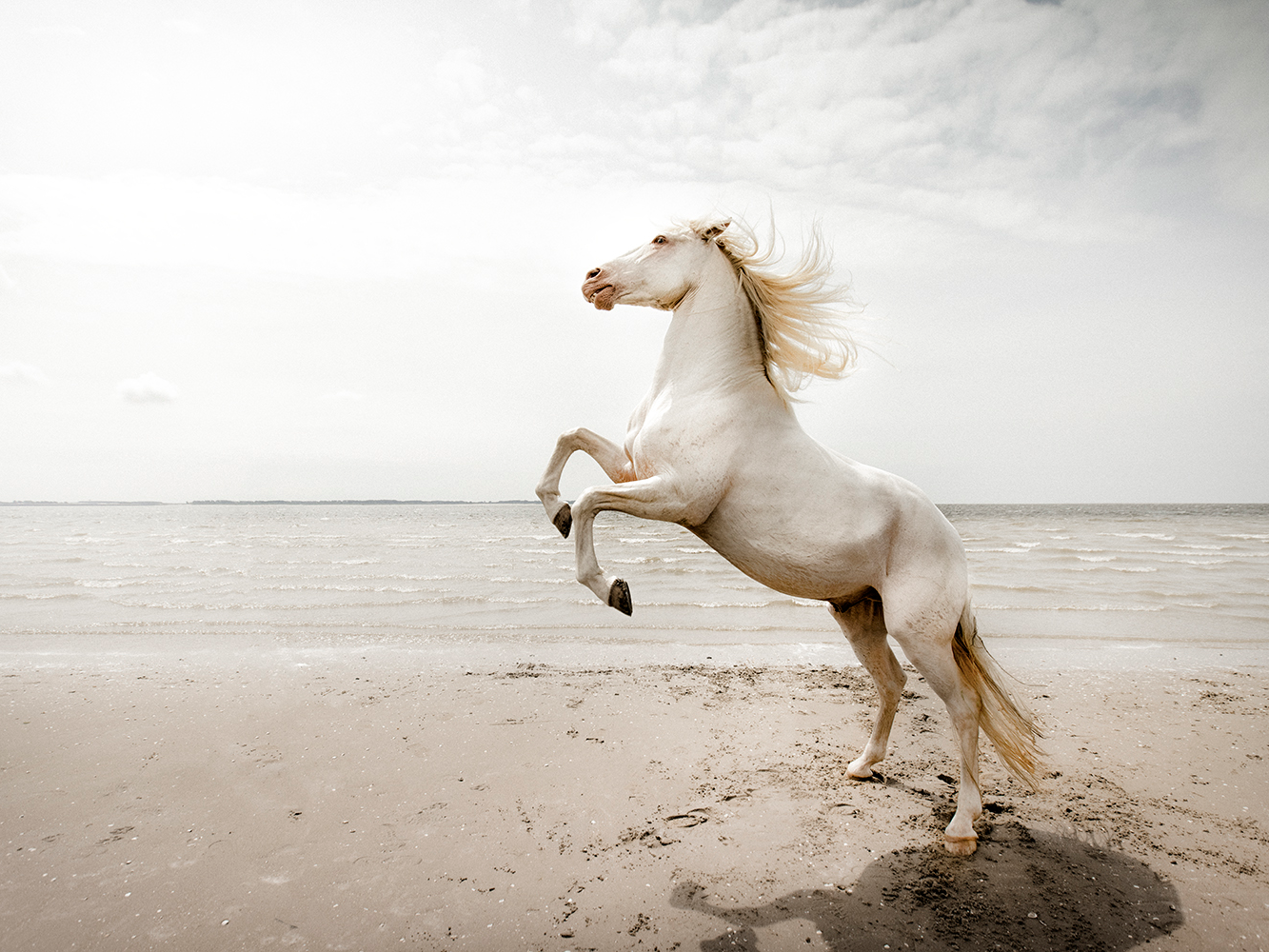 Courtesy of Claire DoppertA horse in the Netherlands.

“The intention in this series is to focus primarily on the character, elegance, power, and nobleness of the horse,” photographer Droppert said. “[When] working with tones, colours, and contrasts, a feeling is created that could appeal to your emotions.”

Meanwhile, this photo of birds is meant to represent silence. 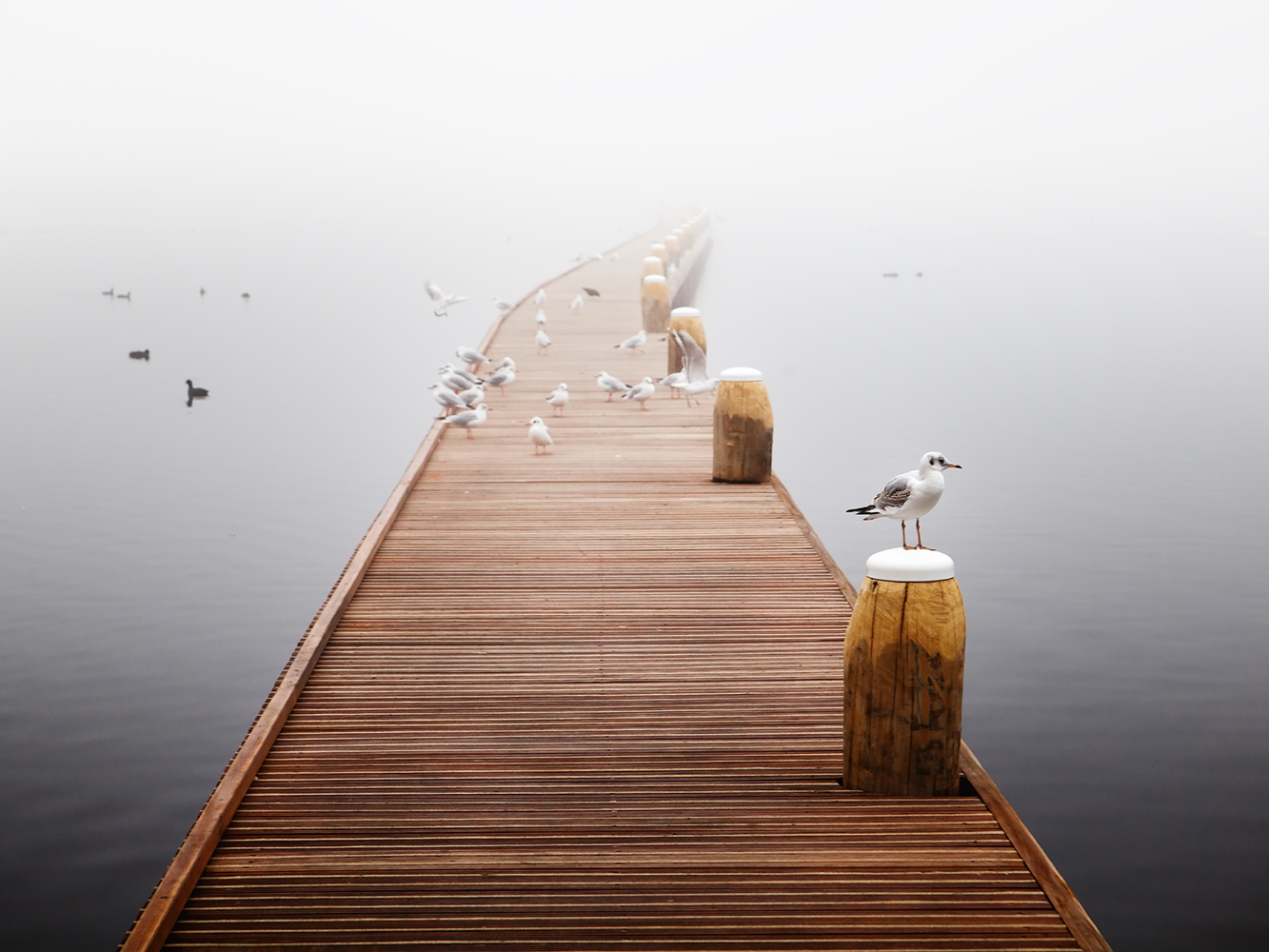 Courtesy of Claire DroppertBirds on a dock.

“‘The Silence’ series is created out of interest for the absence of sound witnessed in different locations around the world,” photographer Doppert said.

This cow is also a representation of silence, but the reflection of the animal is even more powerful. 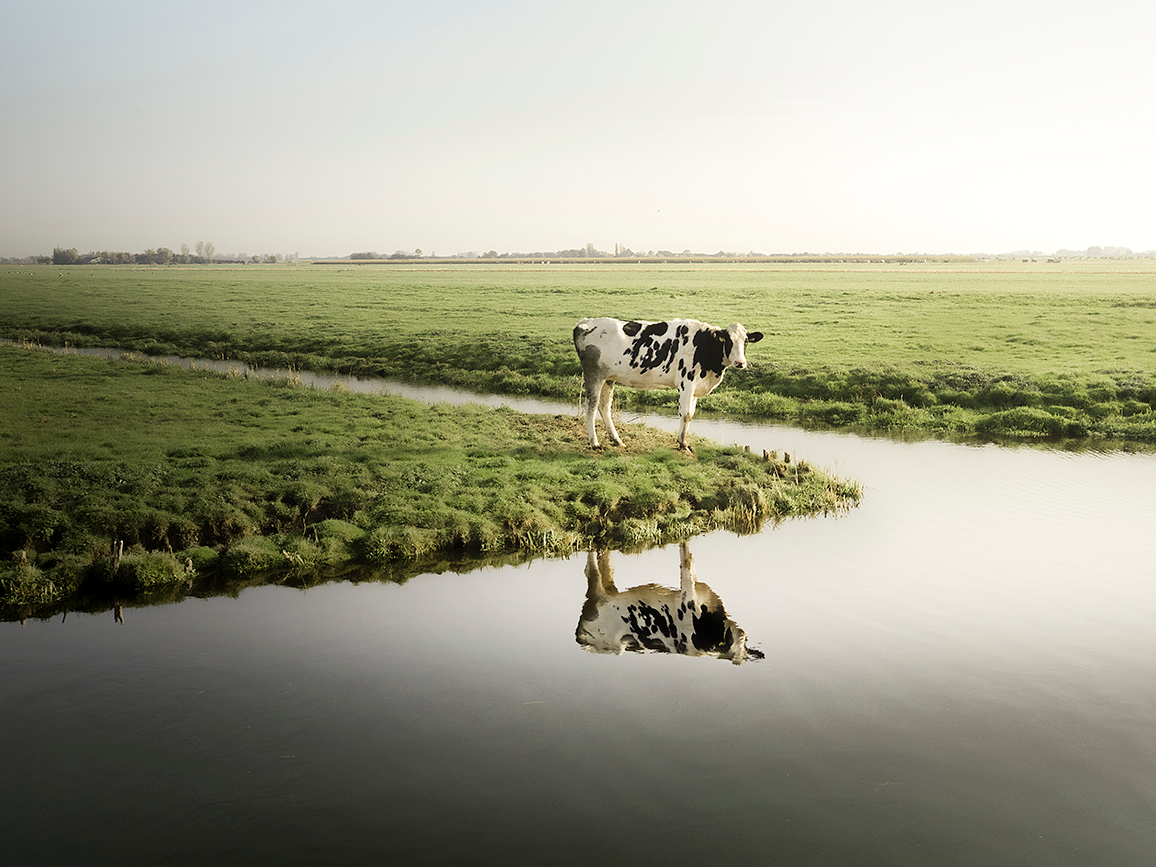 Courtesy of Claire DroppertA cow in the Netherlands.

Droppert calls this photo “The Stare,” and said, “It lasted for two minutes, at least.”

The beauty of nature can even be seen in the sky. 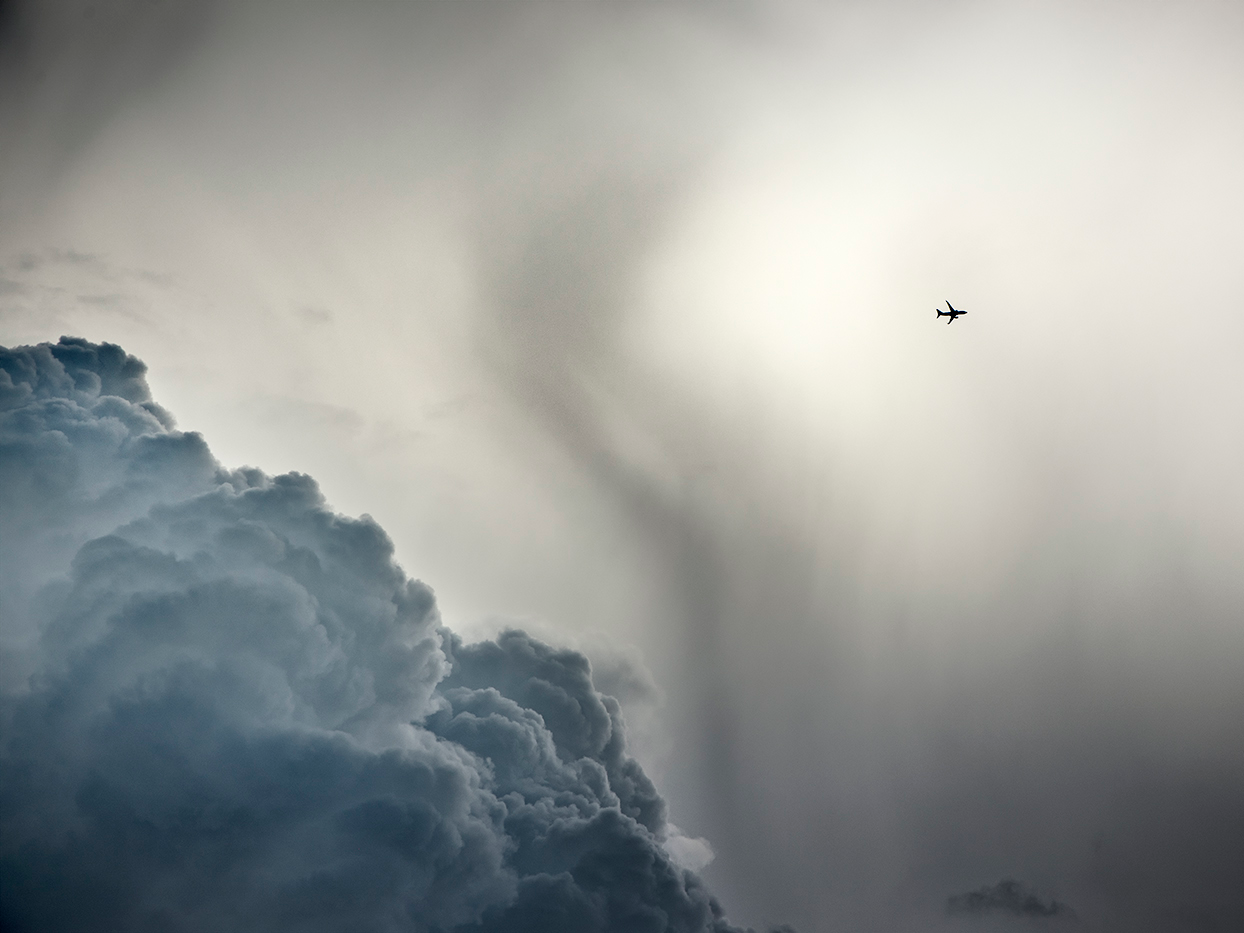 Courtesy of Claire DroppertClouds and an aeroplane.

Dropper said she loves this photo because it demonstrates the unbelievable size of clouds when compared to the small plane.

Clouds are a gorgeous contrast against a deep blue sky. 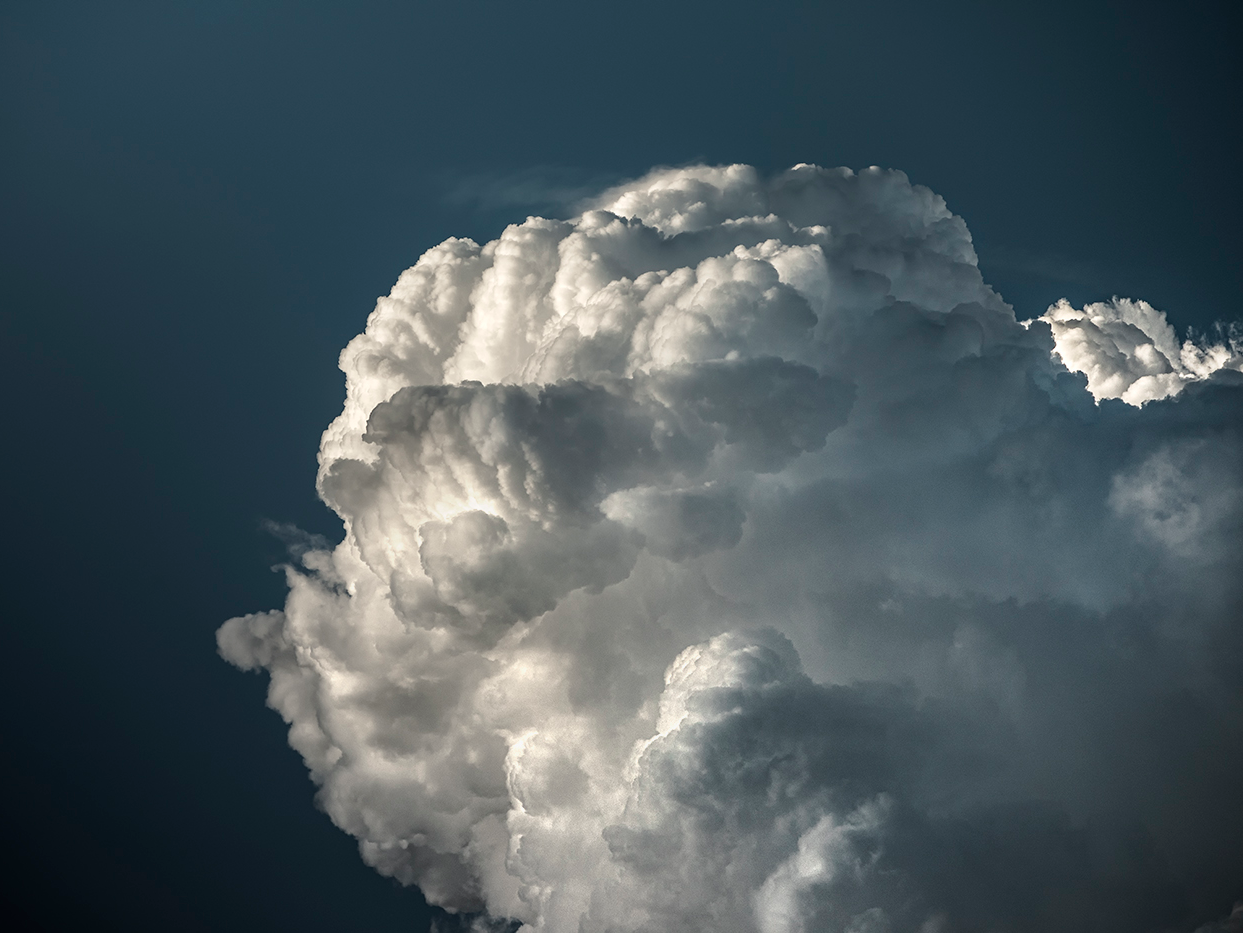 Droppert’s cloud photos were “taken during a warm and sunny afternoon in June in my hometown in Rotterdam, The Netherlands.” She said she likes the “contrasting blue tones” in this photo in particular.

Mammatus clouds create a satisfying pattern of pouch-shaped formations in the sky. These mammatus clouds were found over the plains of Georgetown, Texas.

Captured at the right moment, mammatus clouds can make the sky look like it’s on fire. 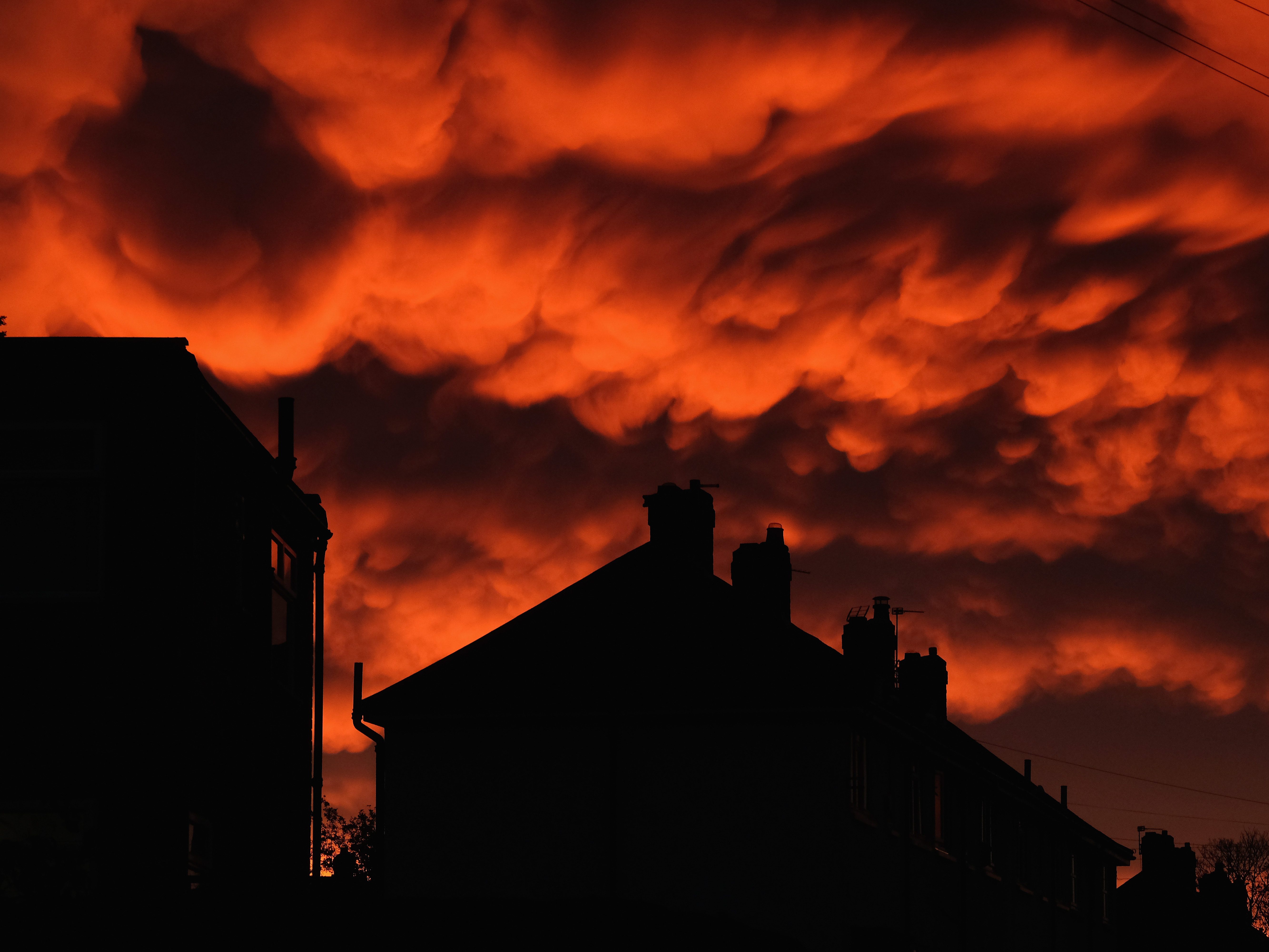 Mammatus clouds form when cool air that is filled with ice begins to sink around warmer air. The result is a beautiful cloud formation in the sky.

In some parts of the world, nature has the power to trick our eyes into seeing things that aren’t actually there, like this stretch of water in the Indian Ocean, which looks like an underwater waterfall. 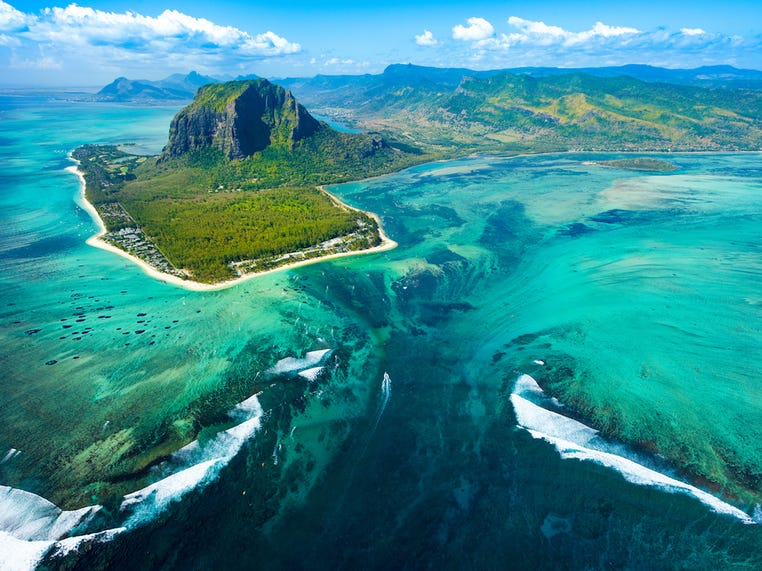 Off the coast of Mauritius, an island in East Africa, there seems to be a river and a waterfall under the surface of the Indian Ocean. In reality, however, there is no waterfall or secret river. It’s just sand being pushed off an underwater shelf called the Mascarene Plateau. Nonetheless, the view is breathtaking.

Nature also has the ability to create some of the most beautiful natural events, like eclipses. 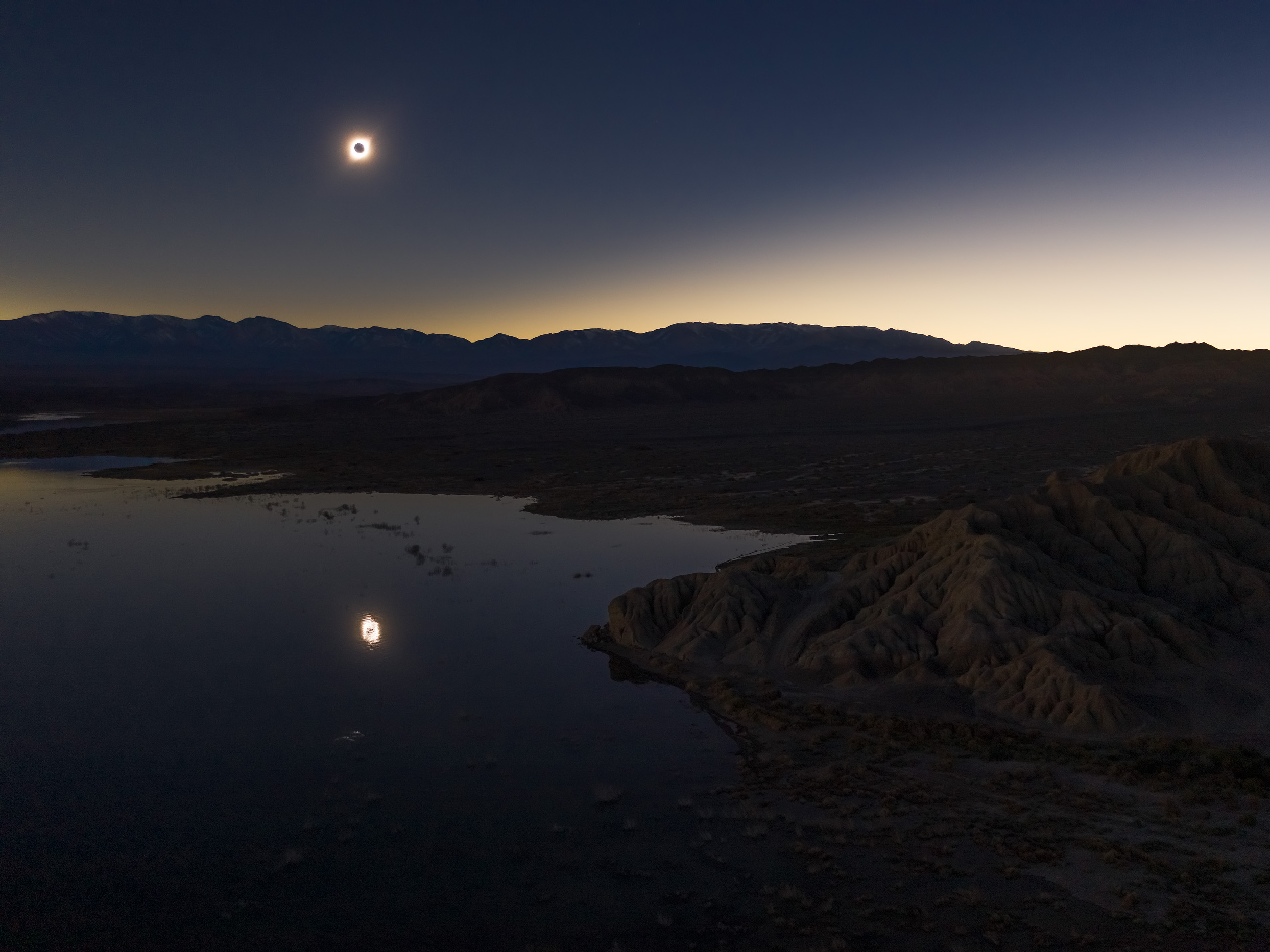 “I had been dreaming of a reflecting eclipse for years, and while it was not a perfect reflection (due to wind), this was pretty much what I had wanted,” photographer Erez Marom wrote about the image, taken in July 2019 in Argentina. “I can’t believe it actually worked.”

And sometimes those events caused by nature can be downright dangerous. 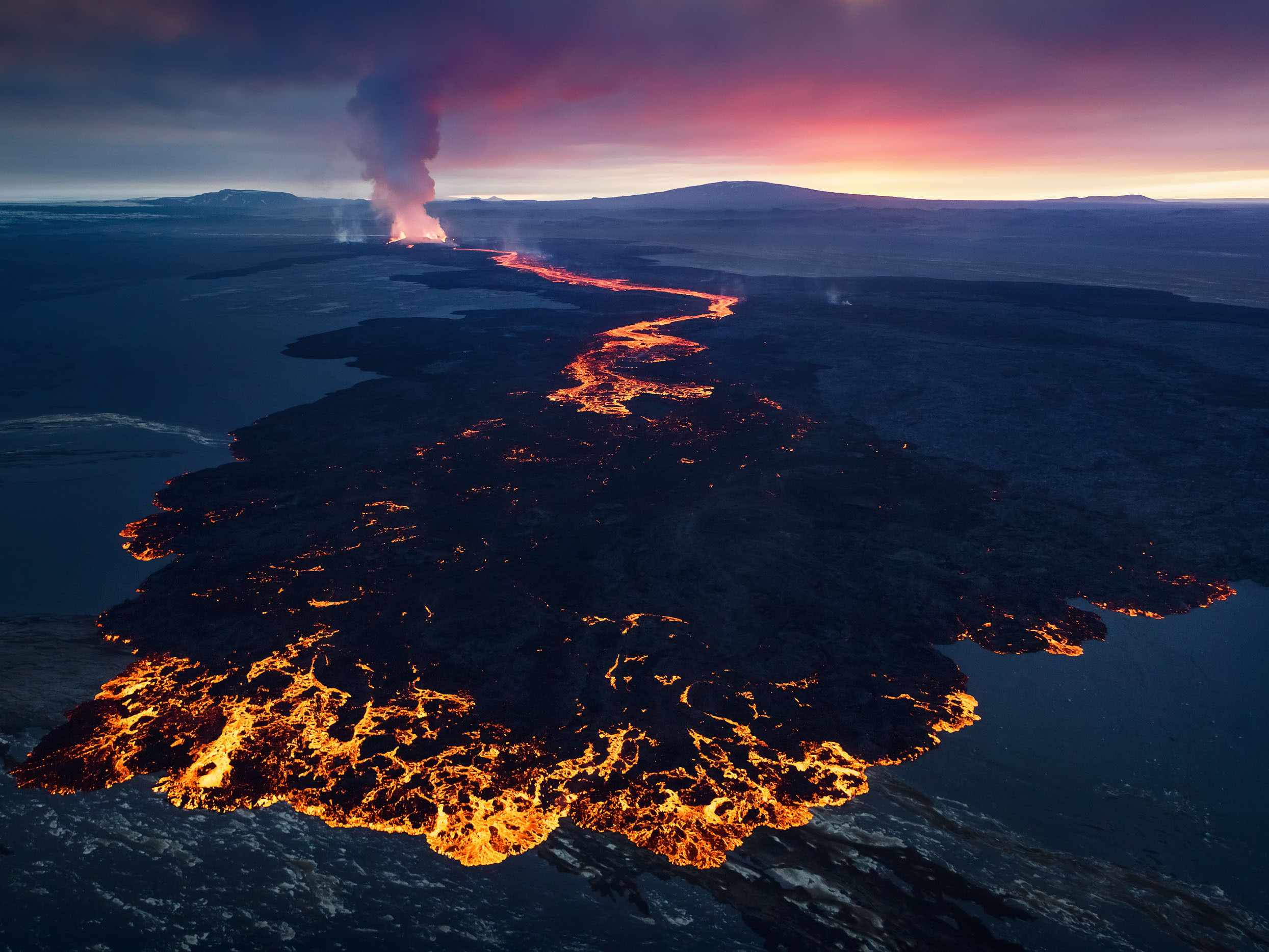 This photo was taken in Holuhraun, which is a lava field located in Iceland. The field of lava is approximately 33 square miles.