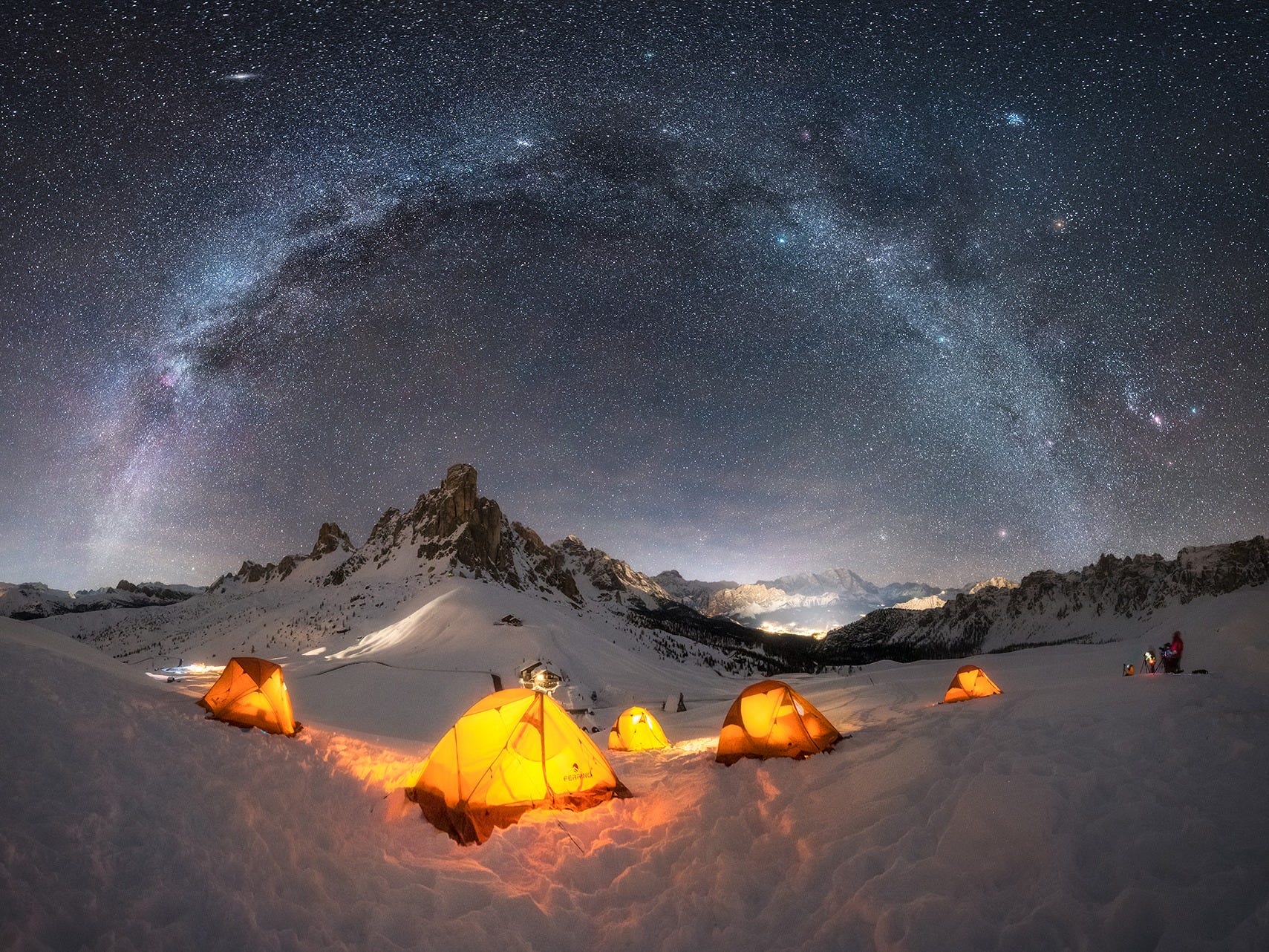 The Milky Way is a barred spiral galaxy that measures 100,000 light years across. It contains over 200 billion stars, including our sun and solar system.

Photographing something so expansive can be challenging, but the results are always magnificent.

Capture the Atlas, a travel and photography website, shares the most beautiful photos of the Milky Way from around the world every year. Keep scrolling to view a selection of this year’s featured images, or visit Capture the Atlas for the entire collection.

“Deadvlei” by Stefan Liebermann shows the Milky Way stretching out over Namib-Naukluft National Park in Namibia. 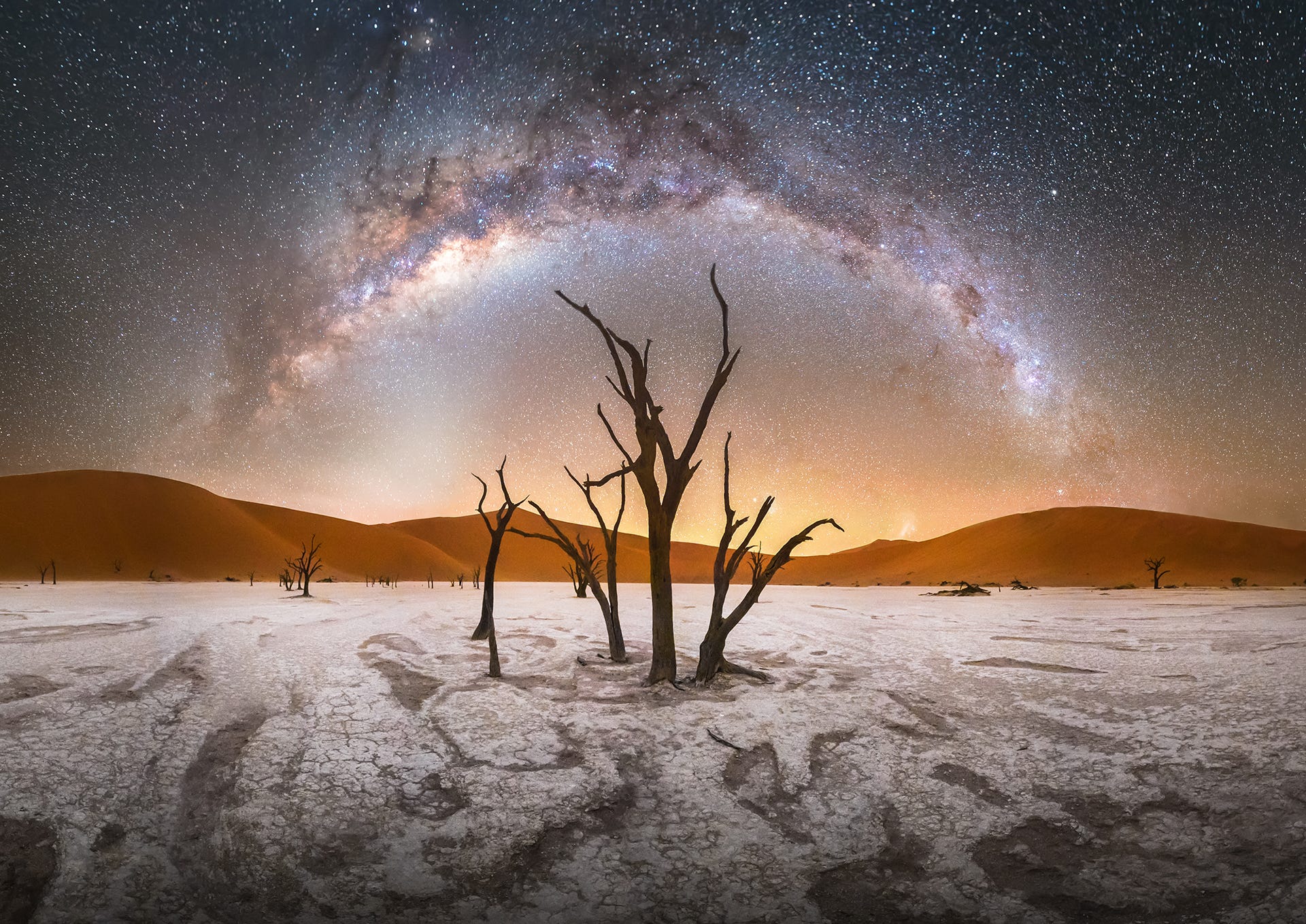 “The trees in Deadvlei have been dead for over 500 years,” Liebermann wrote. “Located in Namib-Naukluft Park in Namibia, these saplings grew after local rivers flooded because of severe rainfalls, but died after the sand dunes shifted to section off the river. High above and far in the distance, the band of our Milky Way galaxy forms an arch over a large stalk in this night panorama image.”

The glowing tents in Giulio Cobianchi’s “Base Camp” make for a stunning contrast with the Milky Way above. 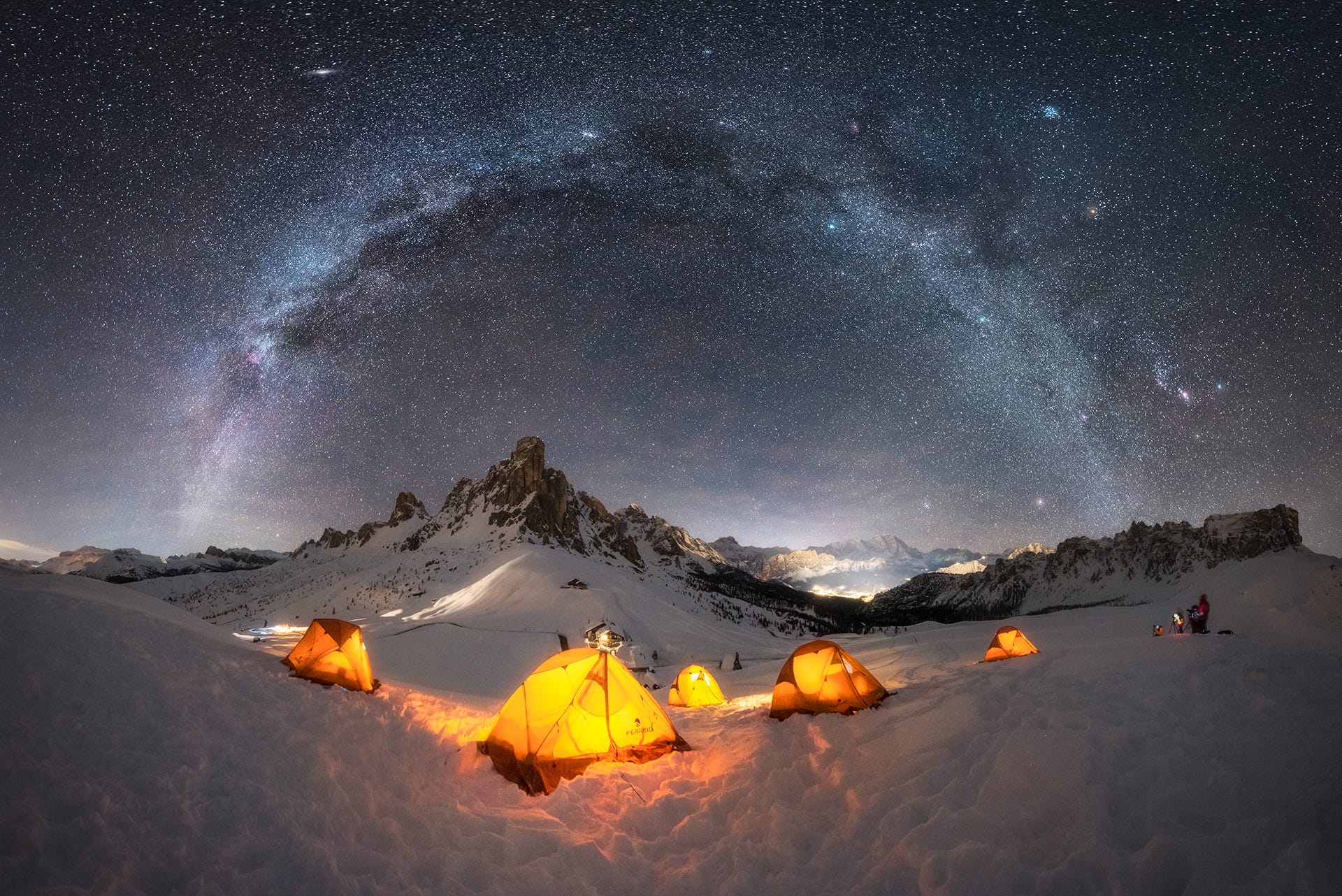 “I love shooting the Milky Way throughout all 12 months of the year,” Cobianchi wrote. “I must admit that during the winter season, it fascinates me even more, probably because the Milky Way has cooler colours that combine perfectly with the snow, and also because shooting under these conditions is much more challenging.”

Ramón Morcillo’s “Enchanted Monastery” shows the Milky Way creating an arch over a monastery in Spain dating back to 1504.

“The idea of shooting an old monastery under the Milky Way in the Spanish mountains was just hanging around my head for months,” Morcillo wrote. “I was fascinated by the idea of planning this image; having the Milky Way arch above the ancient and lonely bell tower. The monastery was an Augustinian convent founded in 1504 and called the Monastery of Our Lady of the Crag. A few hundred miles’ drive followed by a long walk and a challenging climb and bushwhack ended in this beautiful and magical place where I could capture our galaxy arch.” 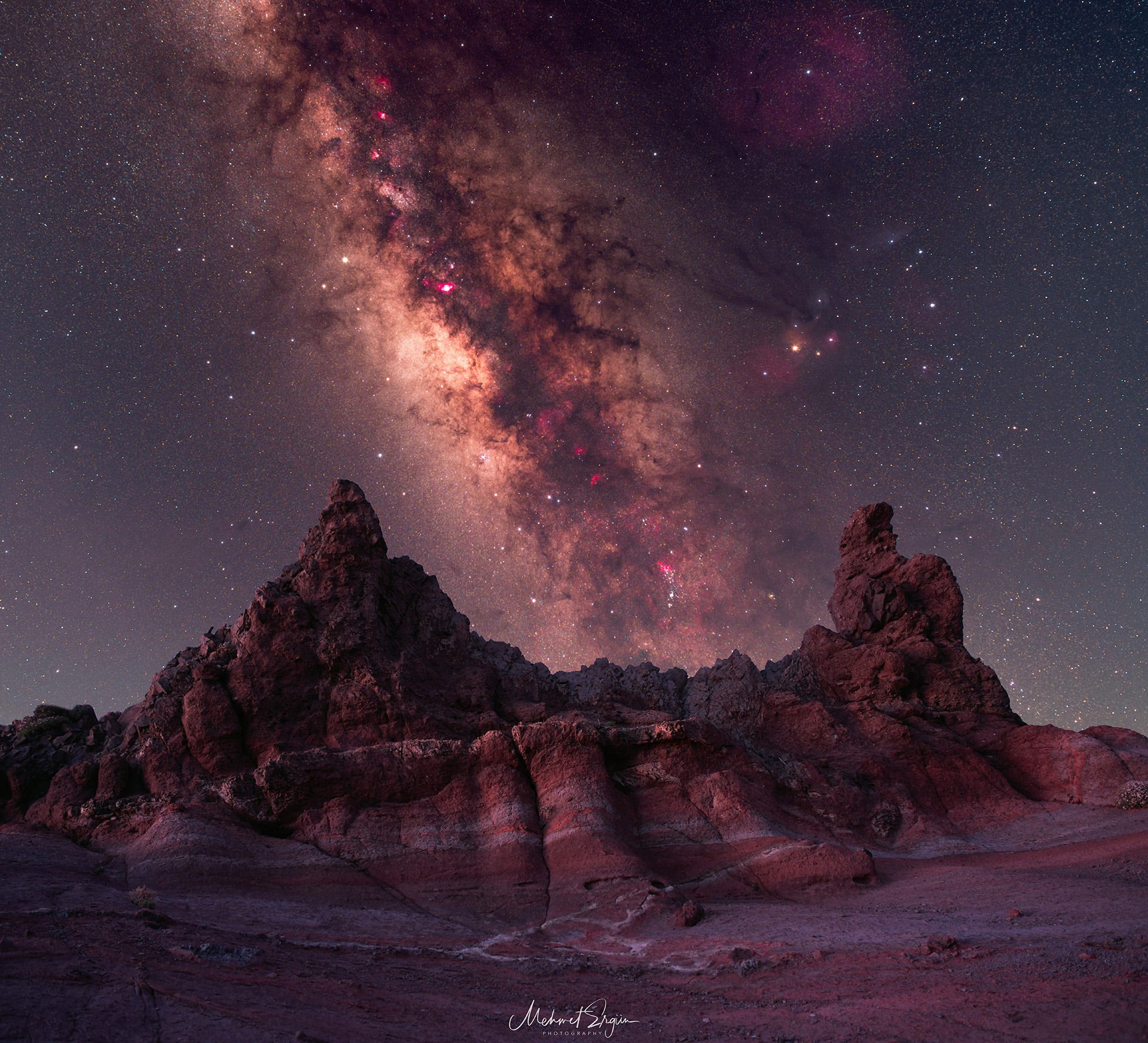 “This photo was taken on one of my favourite islands: Tenerife,” Ergün wrote. “This is an island with unlimited possibilities, where you can enjoy nature in all its glory. In particular, the night sky over Tenerife is renowned worldwide for its excellent conditions for stargazing and astrophotography.”

Michael Goh wanted to capture the way trees appeared to be “clawing up at the sky” in his photo “Nightmare.” 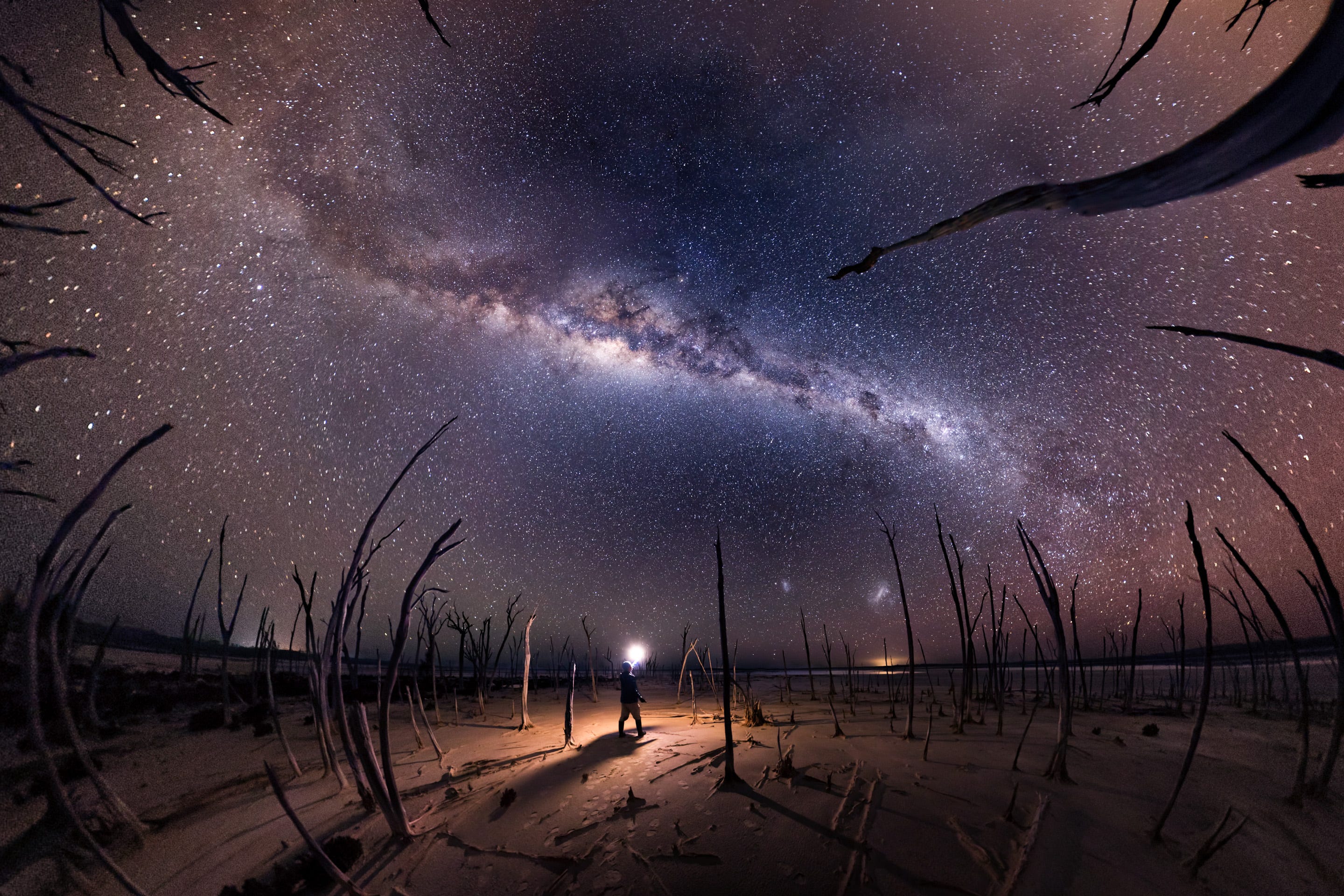 “Dumbleyung Lake is a salt lake located in western Australia,” Goh wrote. “The lake is surrounded by hundreds of trees that have died due to the salt levels, and, on a calm night, all the stars reflect off the water.

“For this image, the dead trees gave me the idea of capturing them clawing up at the sky – the fish-eye panorama turned out better than expected, as the trees almost looked like tentacles. The location is very dark, so with no moonlight available, I used my self-portrait style with the figure holding the light (now a bit clichéd) to create more depth in the image as a solitary figure standing amongst the dead trees.” 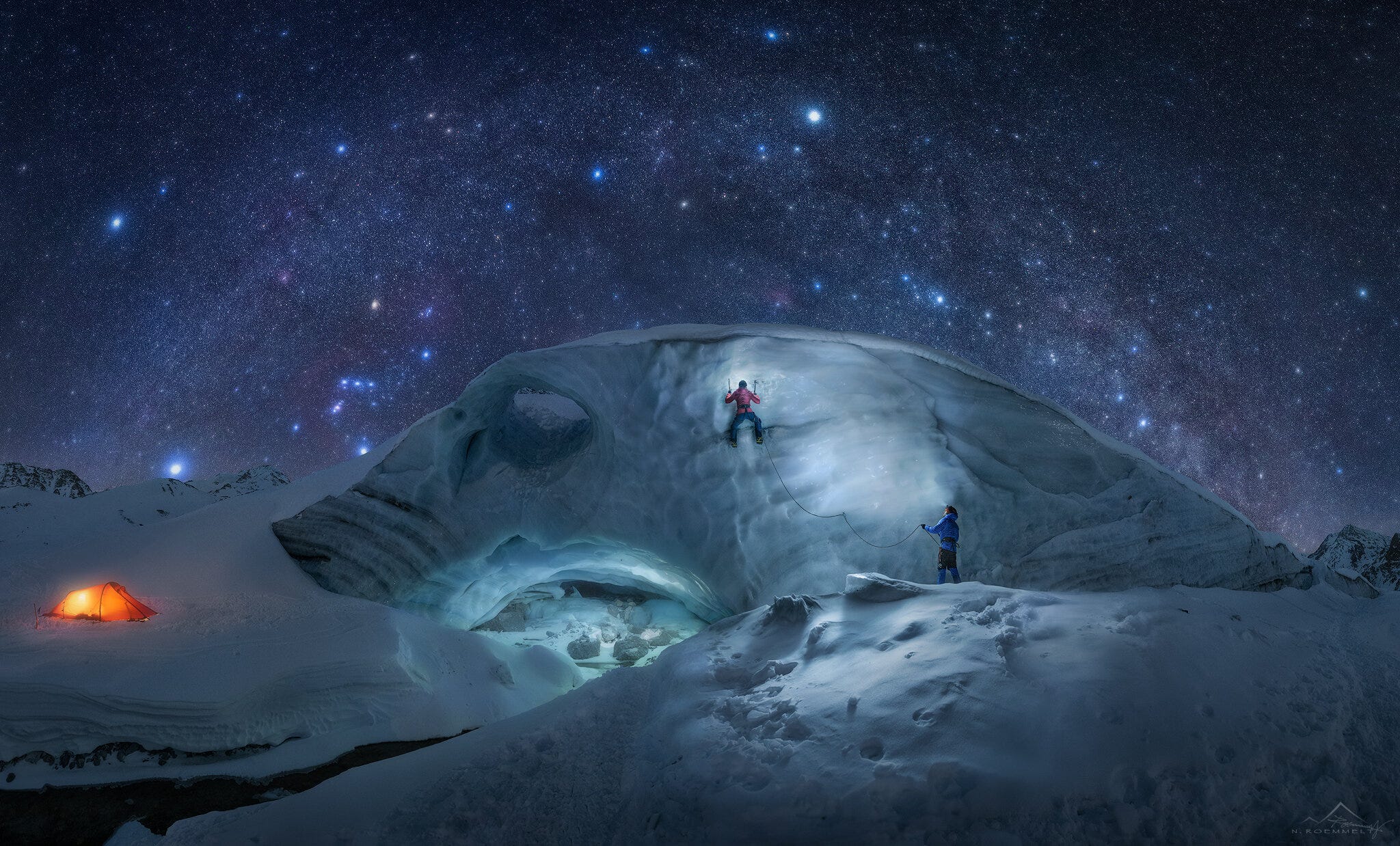 “Although the Milky Way during the winter and early spring is often ignored in astro-landscape photography, I really love the bright stars (some of the brightest of the night sky), colourful constellations, and fainter elements of this part of our galaxy when the galactic core is beneath the horizon,” Roemmelt wrote.

In “Alone & Together in the Stardust,” Marco Carotenuto captured a lone silhouette in the Sahara Desert. 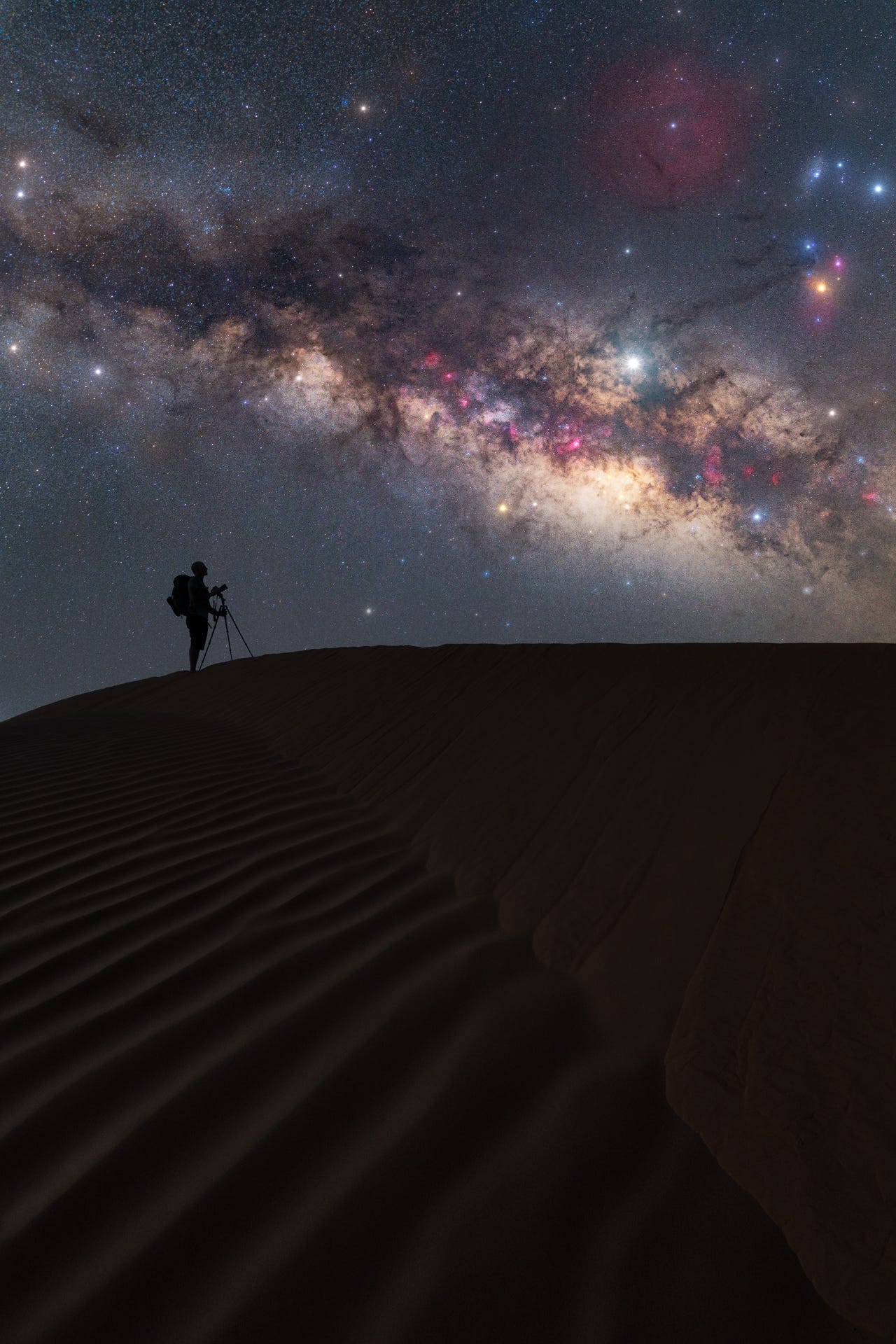 “Describing this place in words or pictures is not easy because there are many emotions you can feel spending a night in the heart of the desert,” Carotenuto wrote. “Staying in the middle of nowhere hundreds of miles away from civilisation and with no electricity, cellular network, or water, certainly puts you to the test. Shooting with your group, you can feel the emotion of sharing moments of humanity, even with those who you don’t know, being present, and forgetting about the daily routine.”

In “Elemental” by Miles Morgan, Hawaii’s Kilauea Volcano lights up the starry sky. 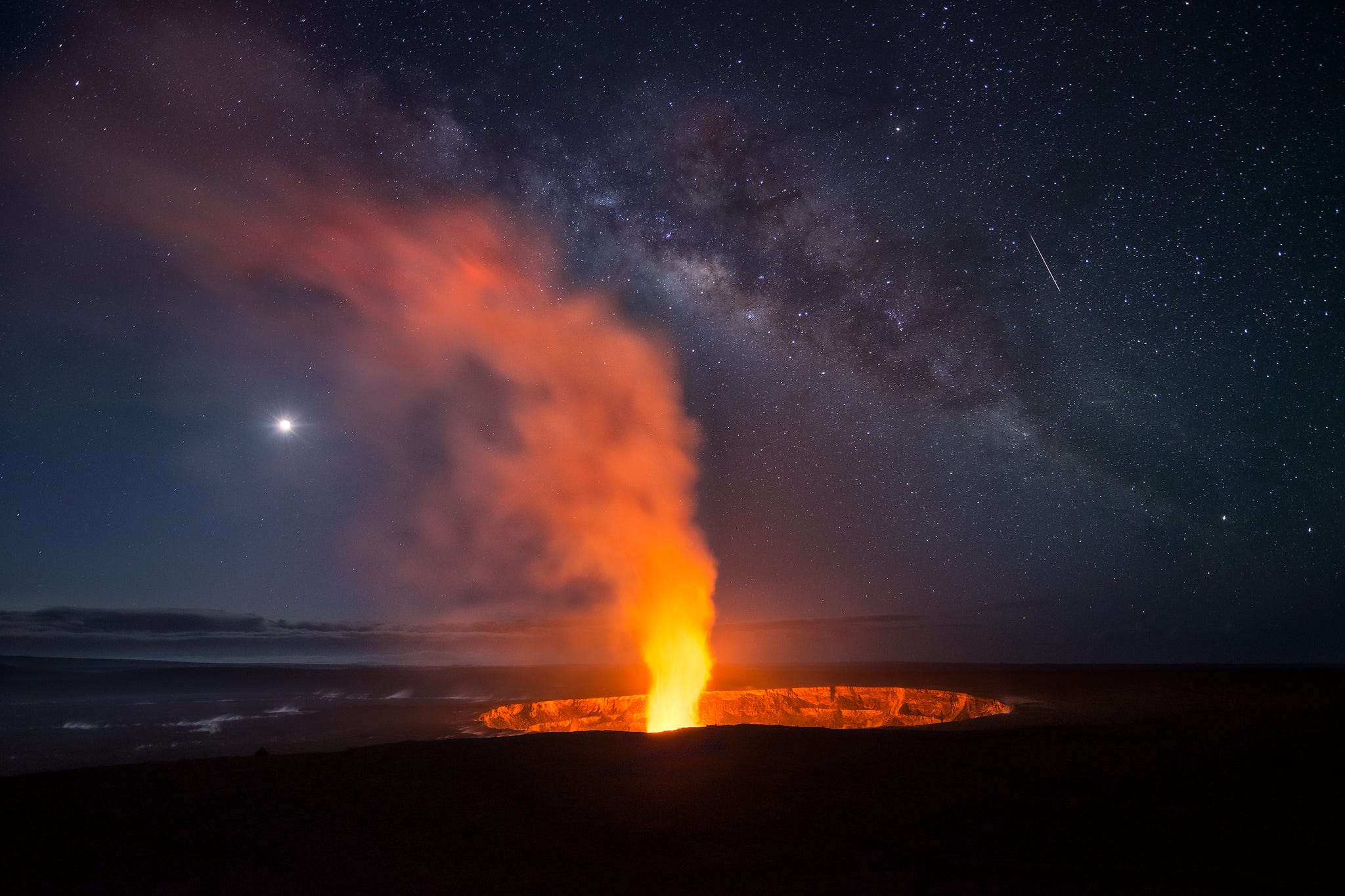 “During my trip to Hawaii, we were typically up around 2:30 a.m., and playing all day and well past sunset out on the lava flows,” Morgan wrote. “On this particular evening, after shooting the sunset, we checked Stargazer and saw that around 3 [to] 4 a.m., many of the planetary elements would be aligning around the plume at the Halema’uma’u crater. Even though the skies were covered during most of the night, we happened to be at the right time to capture the lava and the Milky Way.” 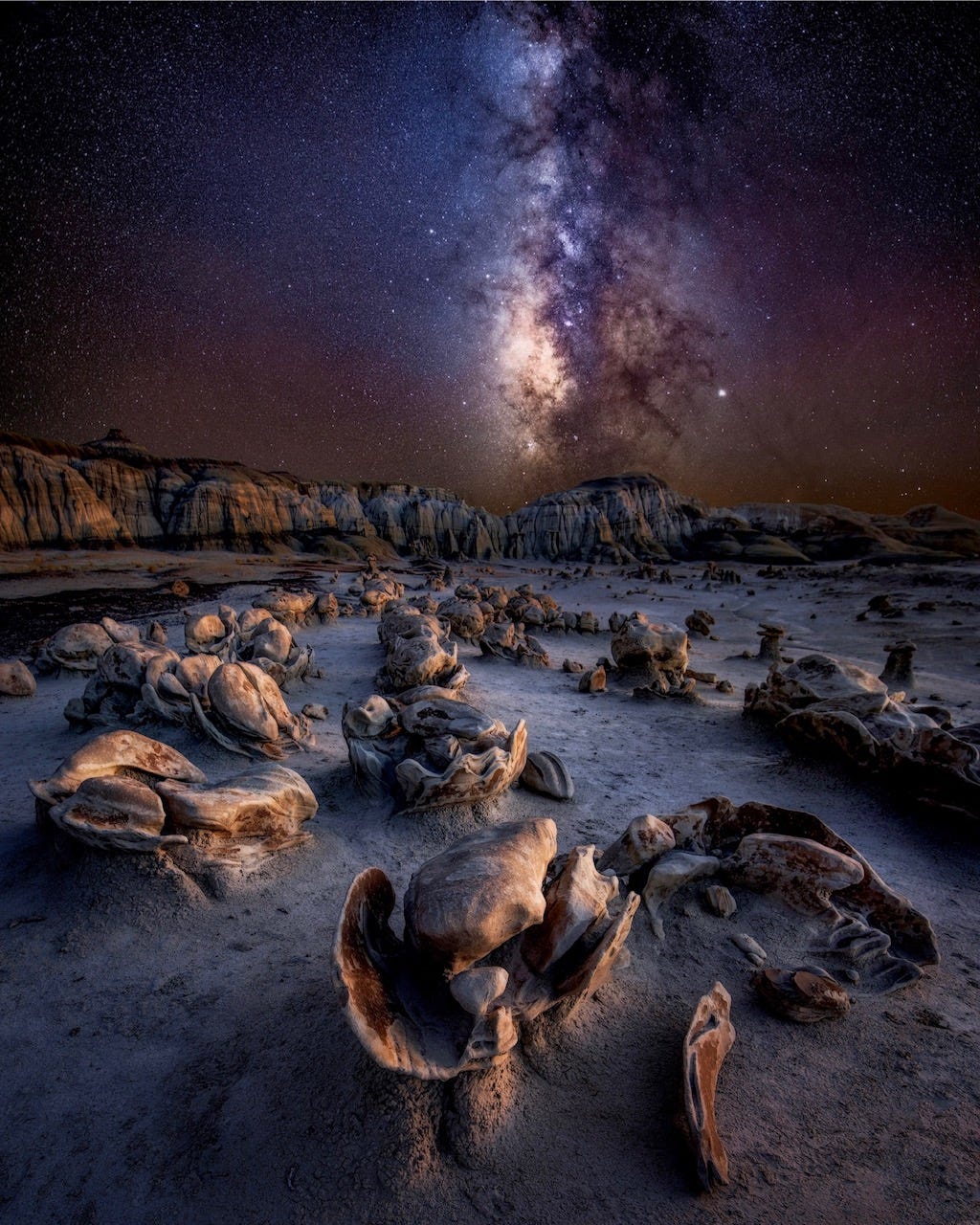 “The Badlands of New Mexico are otherworldly and mysterious,” Heyer wrote. “They resemble an alien planet. If you don’t believe in aliens, you will after seeing this place. This is not an easy terrain to navigate, and it is very easy to get lost. Luckily, my friends knew the area well, and we could enjoy this photographer’s paradise of endless compositions that blew my mind! This was shot last October on a two-week photo tour with friends through the Southwest. It was the best way to end the Milky Way season.”

Other planets are visible in Jorgelina Alvarez’s photo of the Milky Way titled “Gran Firmamento.” 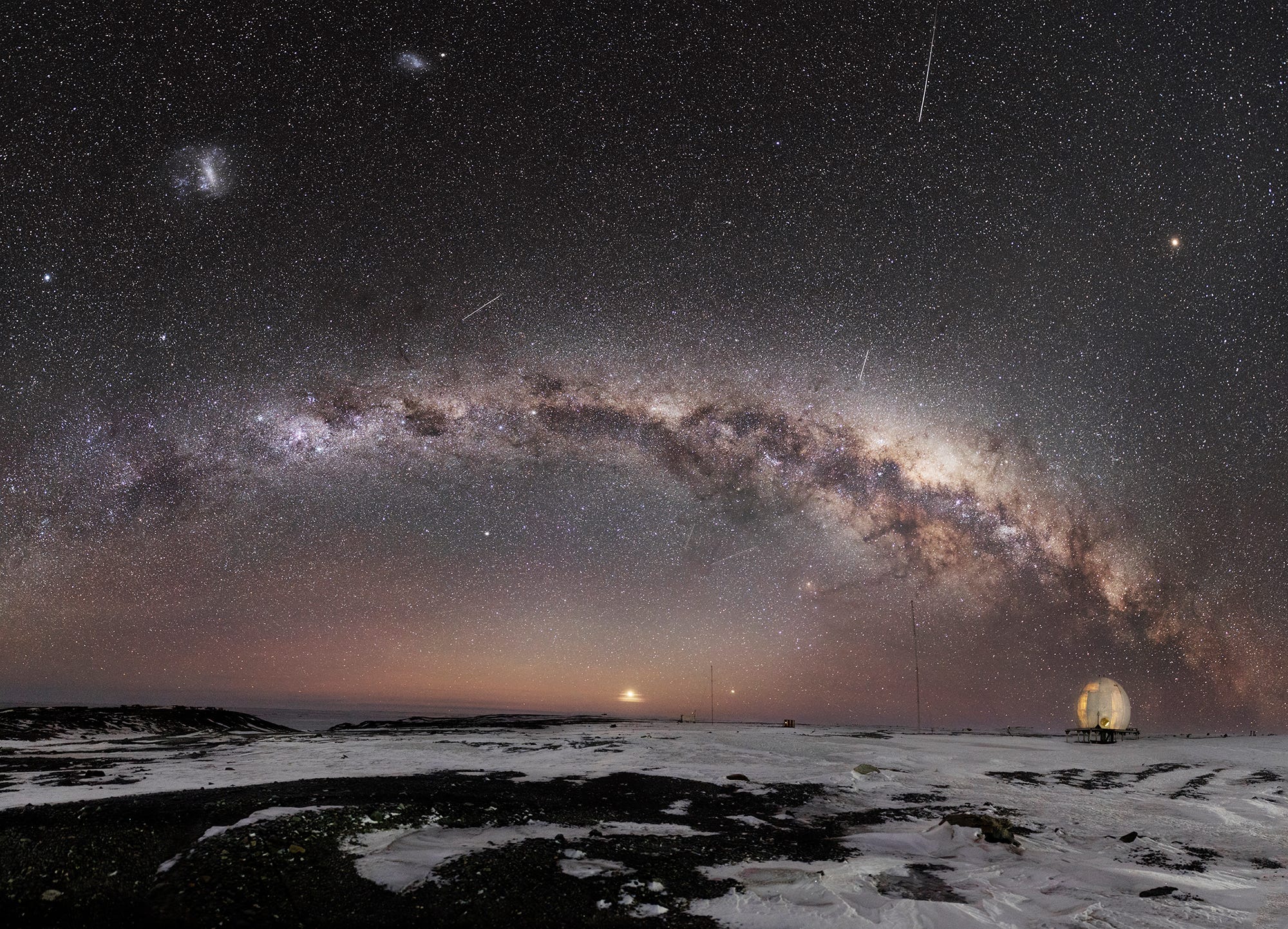 “This was a very special night full of emotions that I tried to capture in this photograph,” Alvarez wrote. “Planets like Venus, Jupiter, Saturn, and Mars, always attract my attention. The galactic centre was about to hide, among thousands of other stars in composition with the snowy Antarctic landscape.”

After years of hoping to photograph himself among waves of rock in Kanab, Utah, Julio Castro finally took “Good Night Utah.” 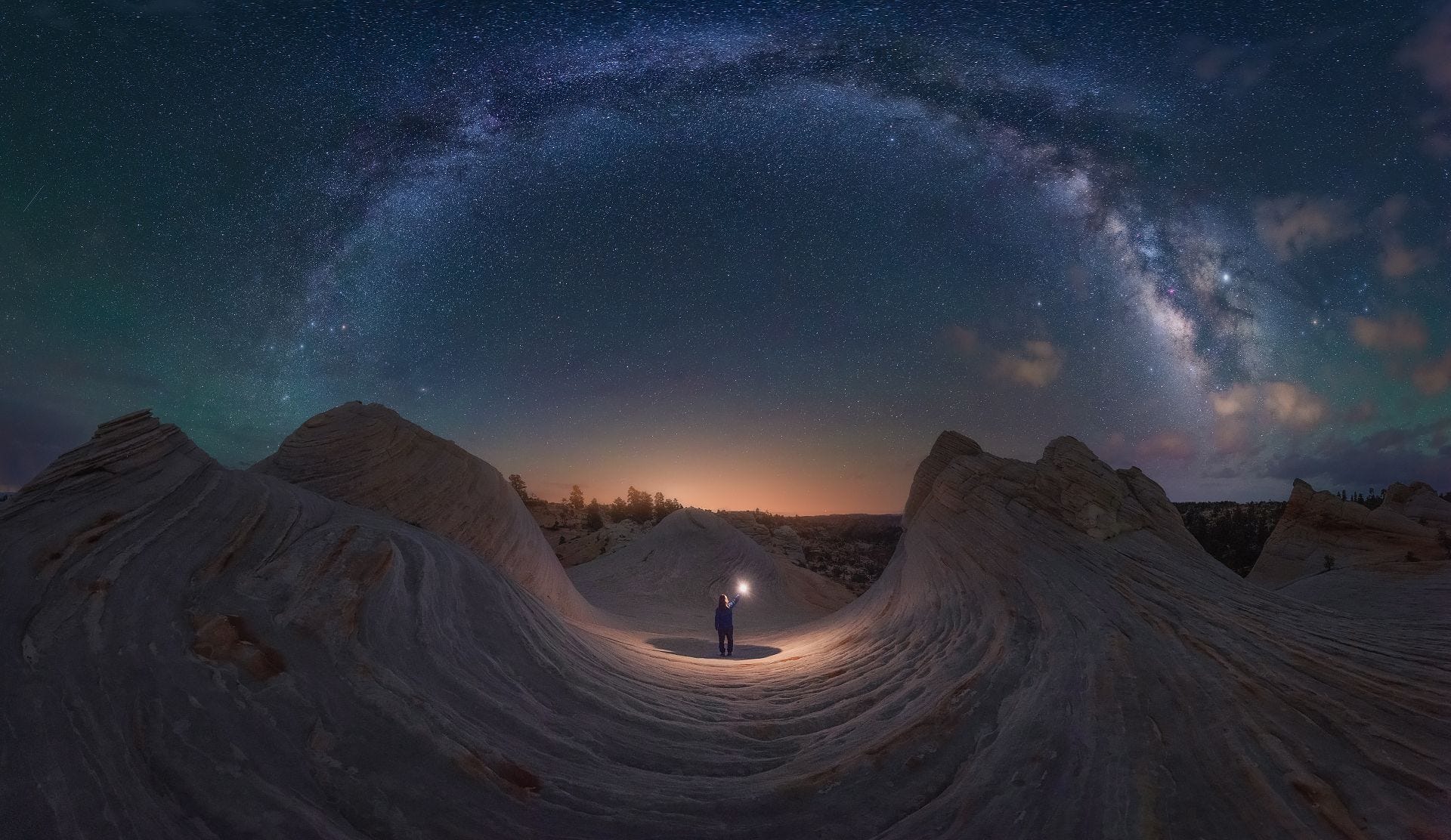 “After visiting this location in 2017, it became my personal obsession to take a photo there, mainly because I couldn’t take any night shots since the place was very remote,” Castro wrote. “In May, I decided to go back and try to take the photo I had in mind. After a very cloudy night, just before dawn, the sky opened up, and a spectacular starry sky gave me the opportunity to take this picture with the arch of the Milky Way above the ‘wave’ of rock that seems to surround the two hills, creating an almost perfect circle and allowing me to get the photo I had dreamed of.”

Sam Sciluna also brought a longtime dream to fruition with “A Night at the Caves.” 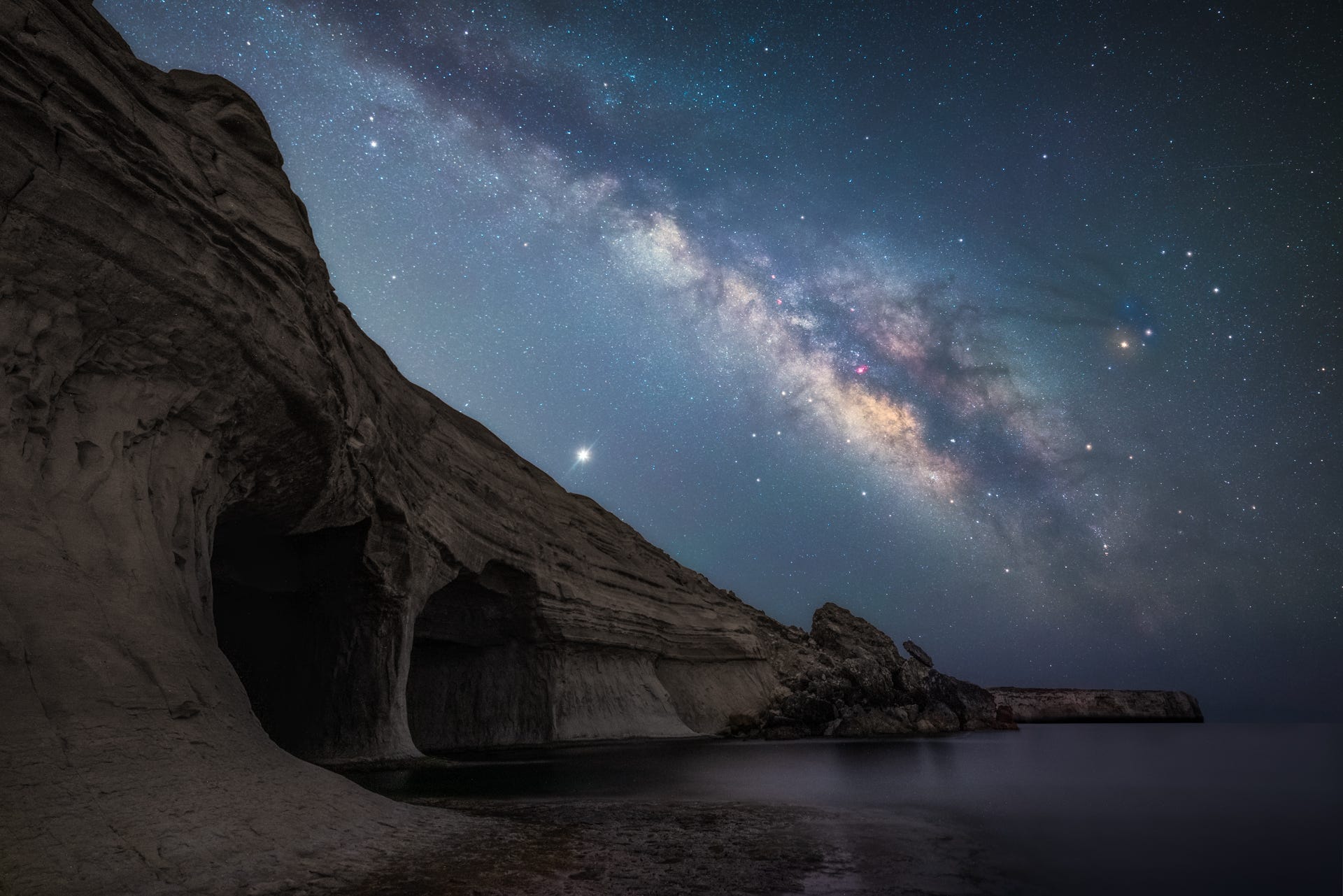 “I wanted to capture the core of the Milky Way over the entrance to Ta Marija cave for years,” Sciluna wrote. “I tried it several times previously, but I was unable to capture an image I was happy with. Last July, I headed back with a friend of mine to try to get a better shot, and finally make this dream a reality.” 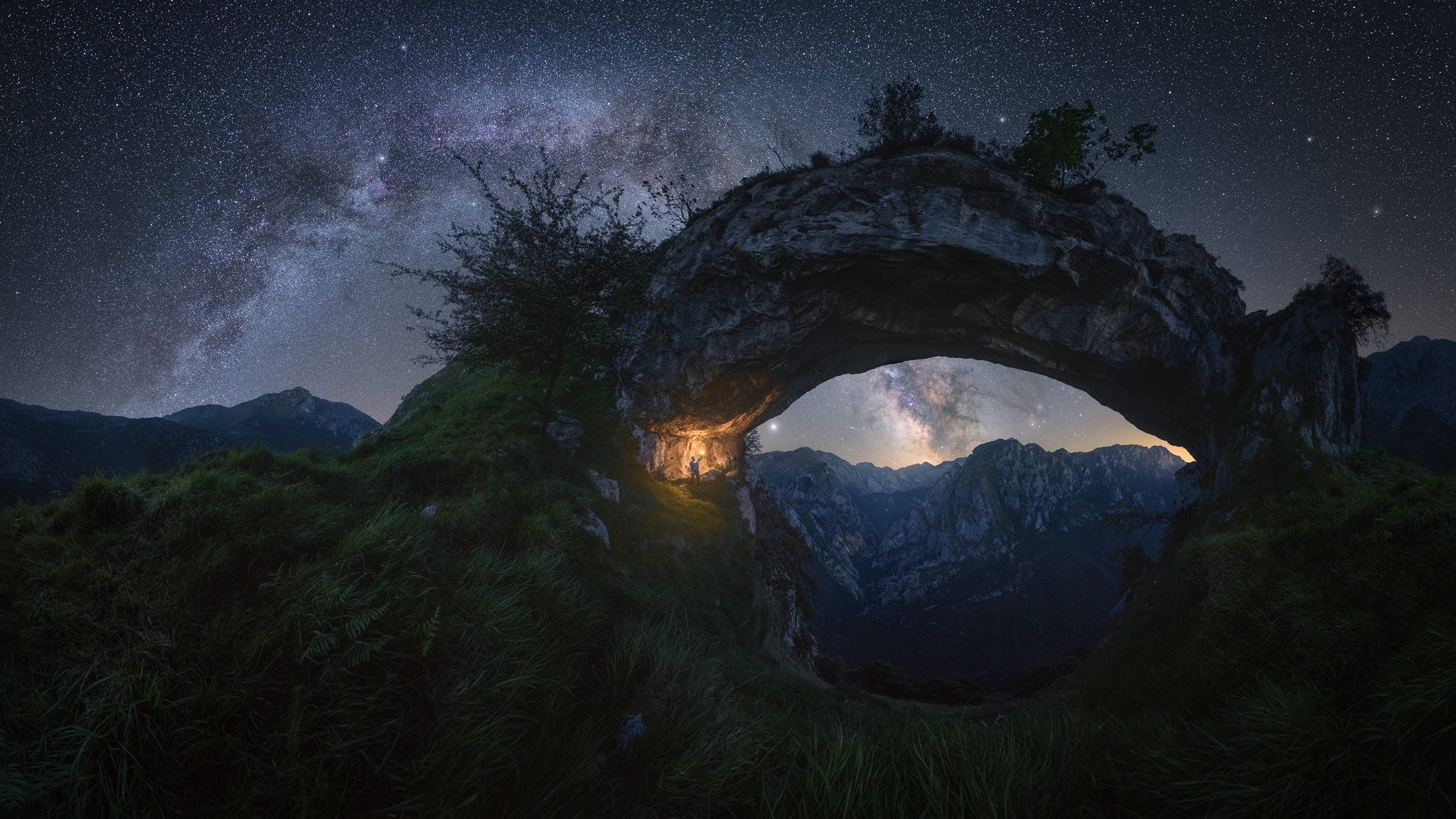 “This spectacular arch-shaped rock formation is located in La Hermida gorge, in the Picos de Europa mountain range in Spain,” García wrote. “At first, my initial idea was to capture the galactic centre inside the arch, but finally, I decided to shoot the two arches overlapped at this time of the year (late spring) when the Milky Way is still not too high in the sky.”

Ryan Smith was testing out new equipment when he captured this highly detailed image, which he called “Heavenly Throne,” in the Southwest. 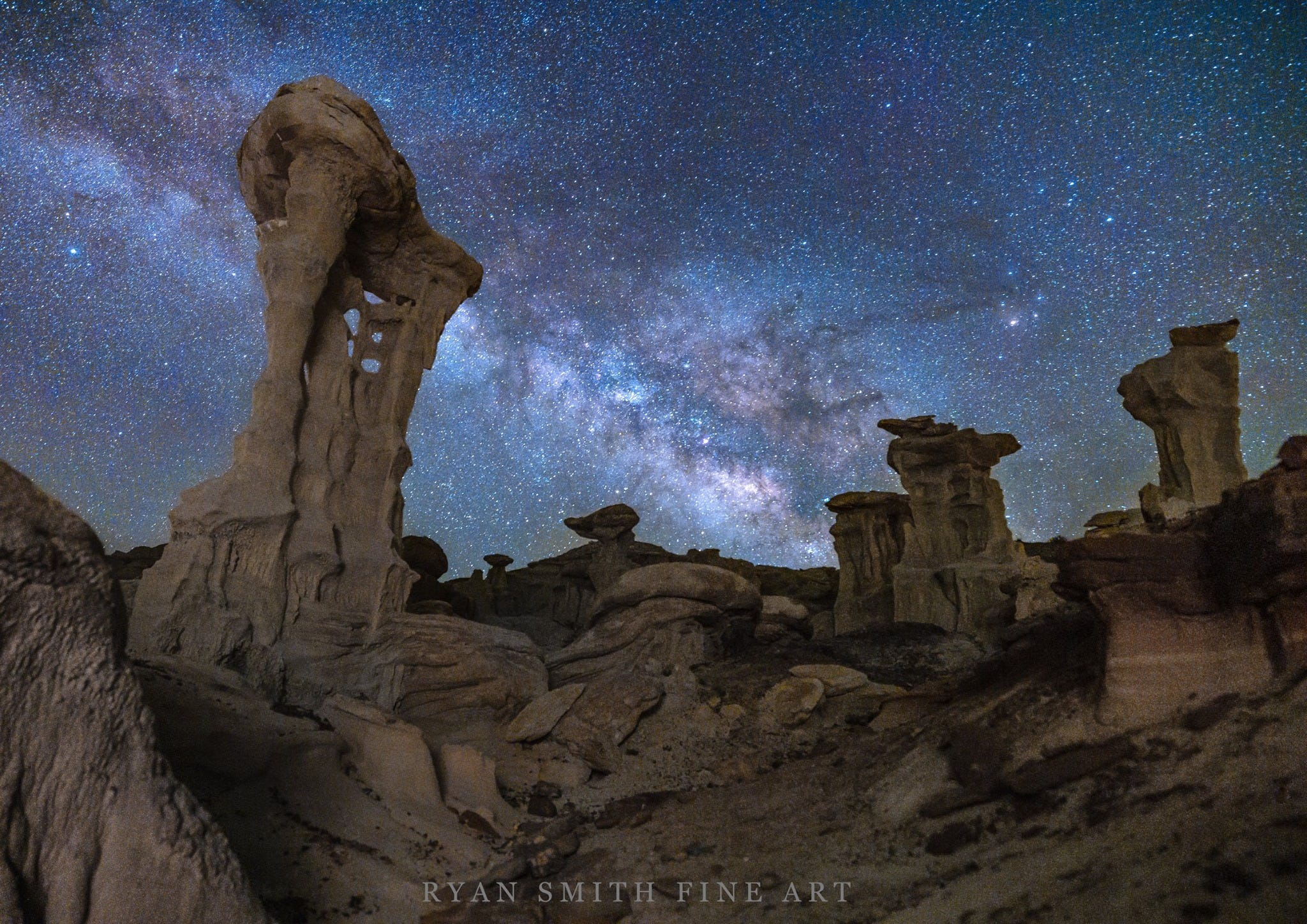 “I took this picture with the Canon EOS Ra, a mirrorless astrophotography camera that has a built-in infrared-cutting filter (positioned immediately in front of the CMOS imaging sensor), which permits approximately four times as much transmission of hydrogen-alpha rays versus standard digital cameras,” Smith wrote. “This allows to capture more details of the night sky and the Milky Way, and really makes a difference in astrophotography.” 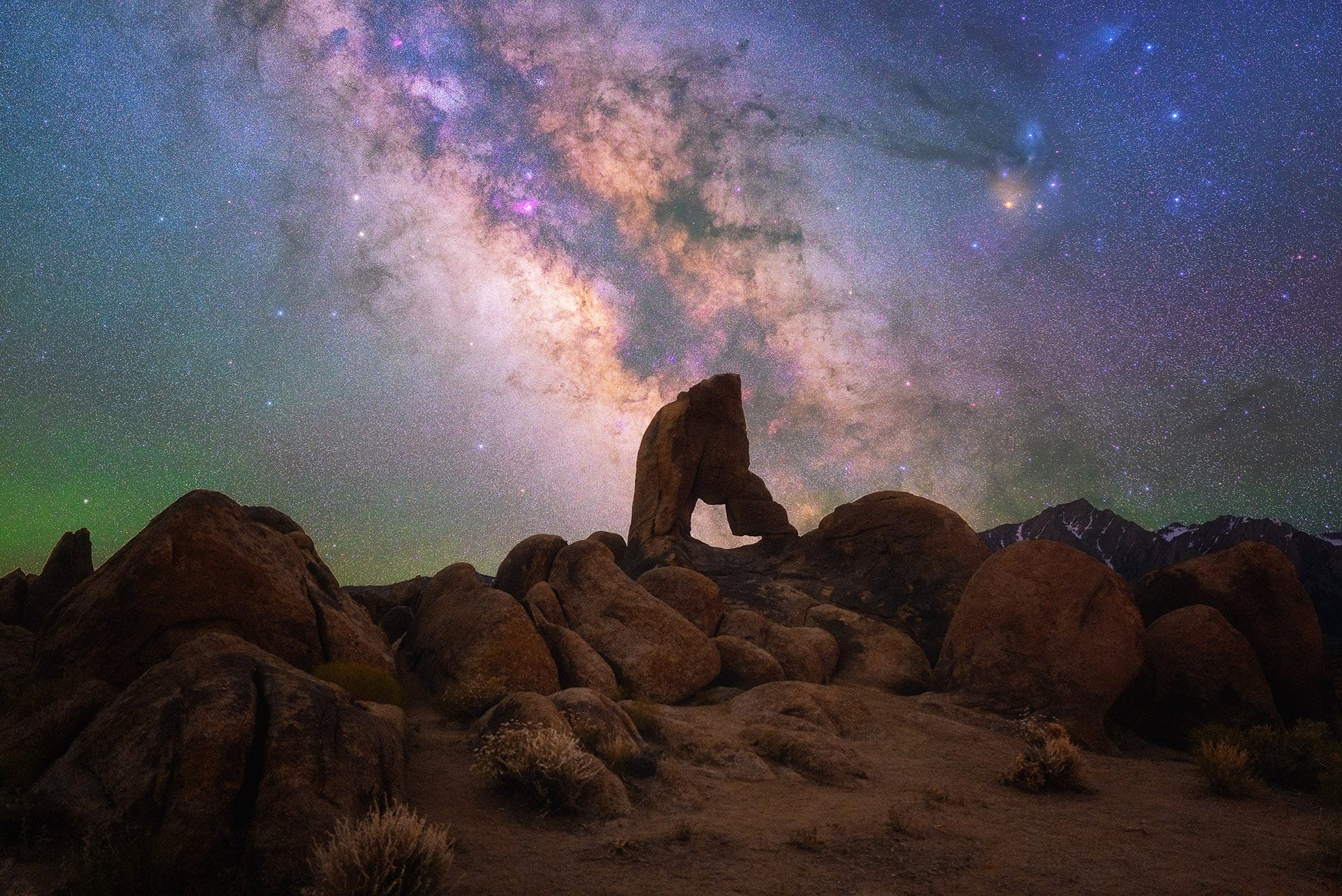 “When I’m travelling through California, I always make sure to stop by the Alabama Hills,” Zelinka wrote. “This is one of the most iconic locations in the western US, with its incredible snow-capped Sierra Mountains, unique rock formations, and dusty roads. In June, I spent a few nights camping in the desert beneath the stars. Once the Milky Way was shining brightly overhead, I wandered through the brush and found this unique arch.”