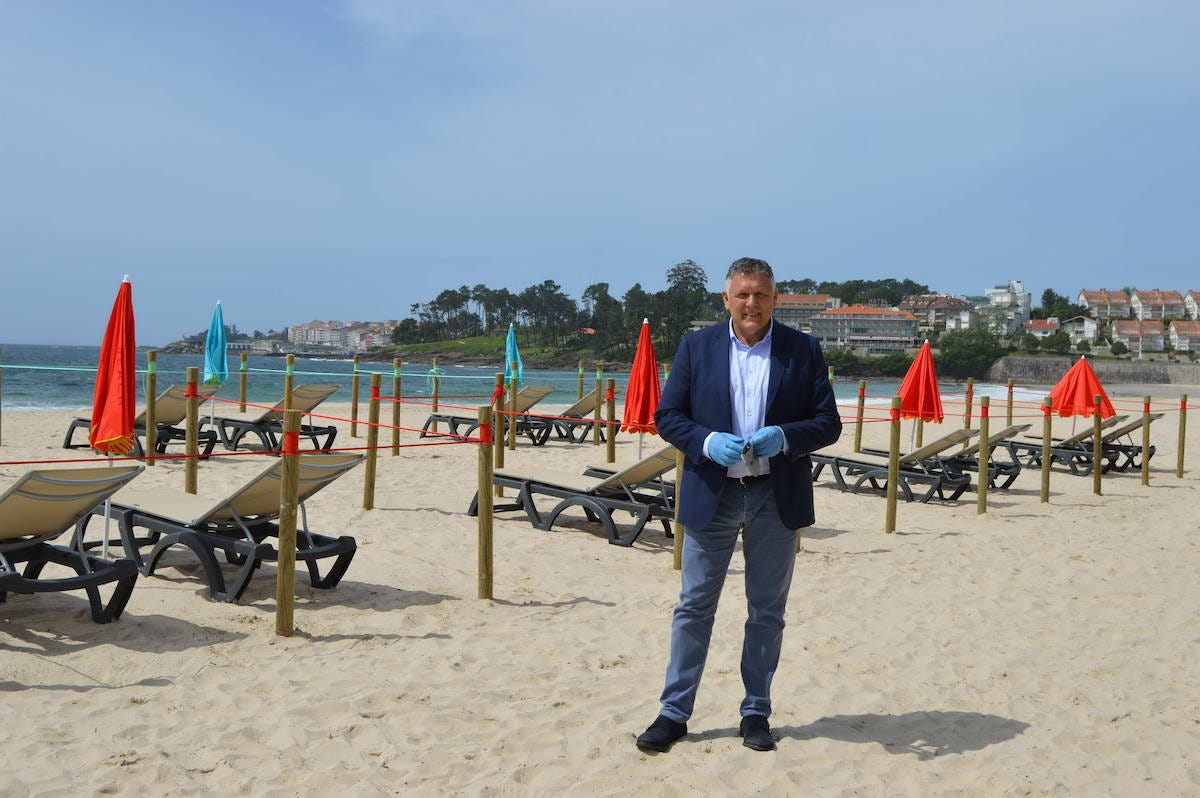 Although the reality of a sunny vacation might feel a bit out of reach this year, resorts in Spain have been coming up with social distancing solutions for visitors.

Silgar beach in Sanxenxo, in the north-west region of Galicia, Spain, is prepping for summer visitors with roped-off zones around sun loungers and umbrellas with an aim to keep social distancing measures in place for beachgoers.

The system will consist of 780 cuadrículas (grids) to accommodate between 1,560 and 2,340 people, which puts it at 50 to 75% capacity compared to previous seasons. On the plus side, this means a beach break will be a little quieter than usual.

Each grid will be three by three meters, and made from wooden posts wedged into the ground joined up by cords. 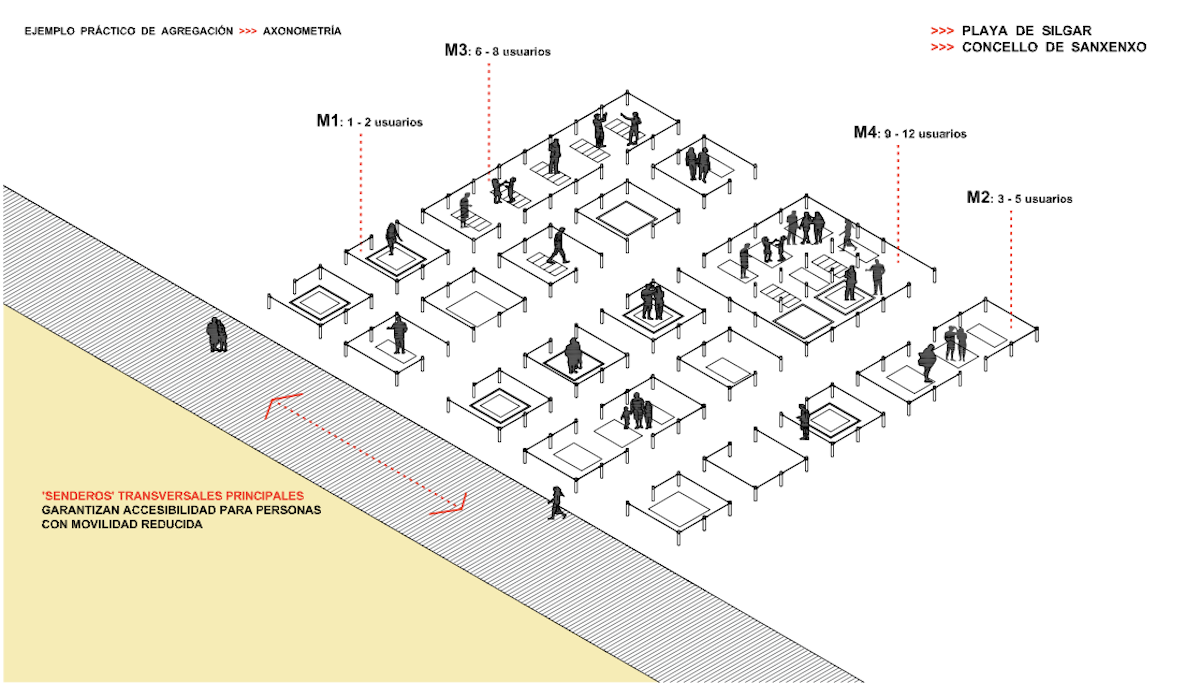 Depending on the number of people in your group, the square can be extended by adding another grid to it, and is set one and a half meters away from the next roped-off area.

One standard sunbathing square can hold two adult people, while adding another grid onto that can fit five, and three grids have space for eight. The maximum amount of grids is four, where a group of 12 can hang out together.

The beach is then further divided up into five zones, and will have two parallel strips either side of the lounge areas.

An eight-metre strip at the rear will be for restrooms and leisure facilities. The patch between the sea and first set of grids will be dedicated to walking as well as having a children’s playground, spanning 30 meters at low tide or seven meters when the water comes in. 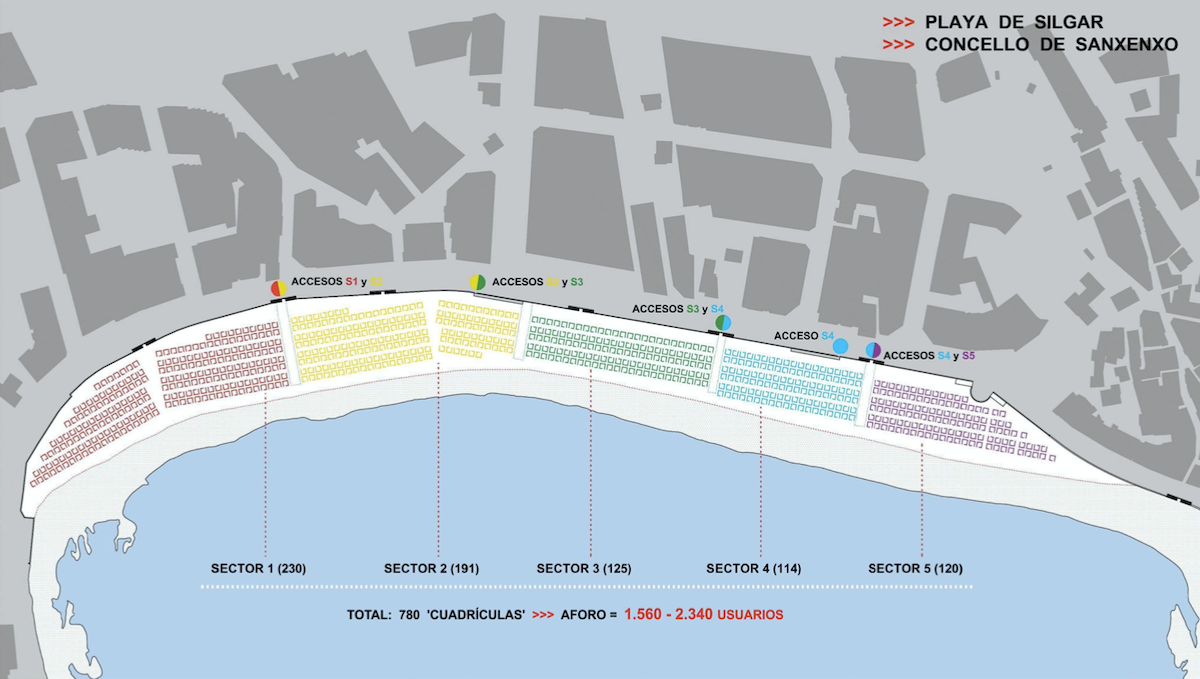 Concello de SanxenxoThe beach will be divided up into five zones.

Unfortunately, the grids can’t be claimed like the good old days of leaving a towel down on a lounger. The Mayor of Sanxenxo, Telmo Martin, told CNN if people leave for lunch, they will lose their spot to others.

However, if reserving a place is integral to your beach experience, then perhaps try visiting Canet d’en Berenguer, a town located north of Valencia, which will be rolling out a mobile app for people to book a sunbathing slot.

According to CNN, it will only allow 5,000 people daily on the local beach in a bid to preserve social distancing, which is about half the numbers they usually see.

Also using a grid pattern, each square is to be marked out with a series of nets on the sand and will be separated by two meters.

Those visiting can book a morning or afternoon session, however, sunbathers will not be able to set aside a place for the whole day.

Canet d’en Berenguer’s mayor, Pere Joan Antoni Chordá, said arrival times will be staggered out to avoid crowding, and much like choosing seats at a movie theatre, beachgoers can reserve any available area in advance, as reported by CNN.

How social media influencers are adapting their content while social distancing

Disney World could look a lot different when it reopens, according to new Florida guidelines for theme parks

How to politely deal with people who break social distancing rules, according to etiquette experts