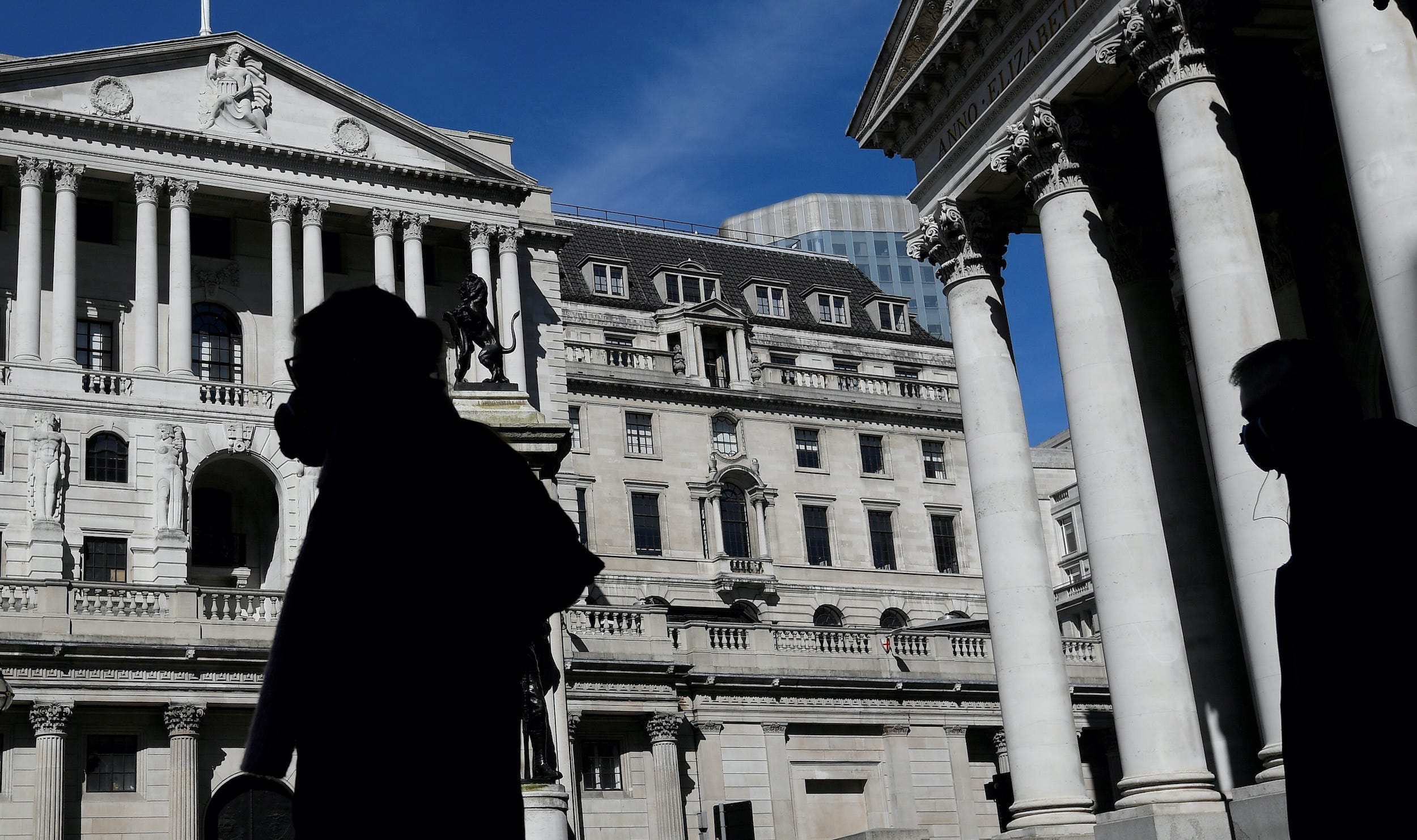 Toby Melville/ReutersPeople wearing masks walk past the Bank of England, as the spread of the coronavirus disease (COVID-19) continues, in London, Britain, March 23, 2020.

The Bank of England on Thursday predicted far severe damage to the UK economy in the final months of this year than it previously anticipated, prompting it to expand its asset purchases to shore up overall activity in light of renewed lockdowns to stem the spread of coronavirus.

The economy is now expected to contract by 11% in the fourth quarter of the year, compared with a forecast for a decline of 5.4% back in August, the BoE said in its November monetary policy report.

It predicted the economy will bounce back more robustly over the course of next year than it thought three months ago. The BoE expects growth to expand by 11% by the fourth quarter of 2021, up from its August forecast of 6.2%.

The BoE unanimously agreed to keep benchmark interest rates at 0.1% and to increase its quantitative easing program by a little more than most analysts were expecting, by Â£150 billion ($US195 billion) to $US895 billion ($US1.165 trillion), compared with expectations for an increase of Â£100 billion ($US130 billion).

“The outlook for the economy remains highly uncertain. It is dependent on the evolution of the pandemic and the measures taken to protect public health,” the BoE said in its report. “It will also depend on how governments, households, businesses and financial markets respond to those developments.”

The central bank did not discuss deploying negative interest rates, but said it stood ready to take whatever action it believed necessary to prevent a worse downturn in activity and to bring inflation closer to its 2% target, as the pandemic has now confined most of the UK population to their homes and closed non-essential businesses for a month.

“If the outlook for inflation weakens, the Committee stands ready to take whatever additional action is necessary to achieve its remit,” the BoE said. “The Committee does not intend to tighten monetary policy at least until there is clear evidence that significant progress is being made in eliminating spare capacity and achieving the 2% inflation target sustainably.”

Around 80% of the UK population are back under lockdown from Thursday, after the government announced at the weekend it would impose tough measures across the country to stop the renewed spread of COVID-19.

The UK already has the worst official death rate in Europe from coronavirus, with over 45,000 fatalities. The Office for National Statistics says total deaths are around 60,000 higher than average, meaning that the actual death toll could be far worse.

The UK economy was also one of the worst-hit when the pandemic first broke out in Europe.

The Bank of England brought forward the timing of its rate decision to avoid clashing with Rishi Sunak, finance minister, who will give an update on the government’s furlough scheme later in the day. The program had been due to expire at the end of October, but the resurgence of COVID-19 cases and another impending lockdown means it will now last through to December.

Schools, colleges and universities will stay open during the four-week lockdown, but all nonessential businesses, including restaurants, pubs and bars, will close.