A 30-minute conversation may be one of the riskiest COVID-19 activities. Here's why quiet is a key virus-fighting strategy. 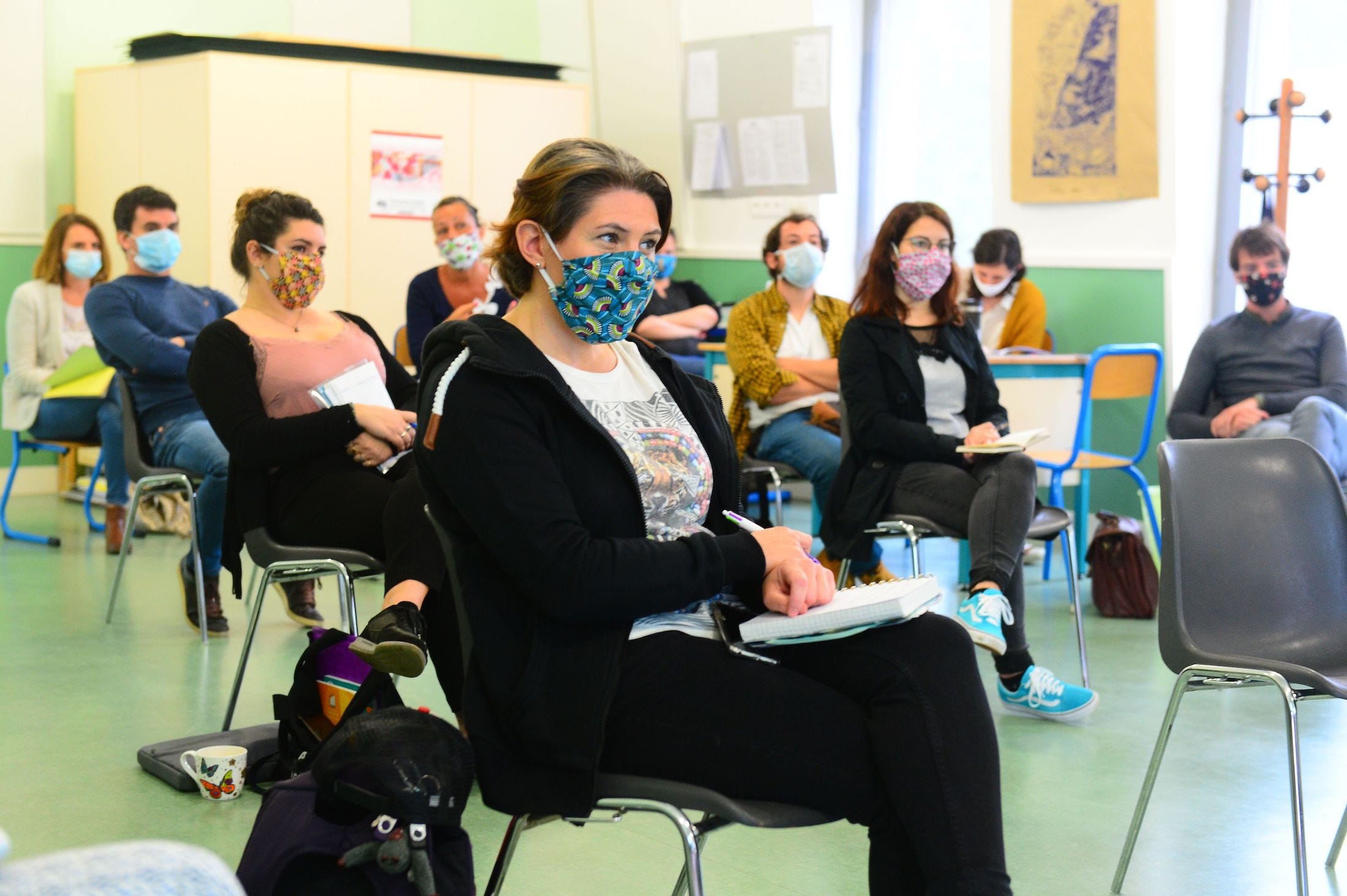 Mehdi Fedouach/AFP via Getty ImagesTeachers wearing masks attend a meeting at Jean-Jaures elementary school in Cenon near Bordeaux, France on May 11, 2020 amid preparations to re-open primary schools.

Being within spitting distance of other people right now is a very risky activity.

Singing in groups can send the coronavirus soaring into others’ bodies. Shouting in bars can move the virus around among a crowd of people. And a new study from Singapore, published in the Lancet on Monday, suggests that longer conversations, too, are especially risky.

The Singaporean study, conducted among more than 7,000 people who lived, worked, and socialised with people who had the coronavirus in the spring, found that engaging in a 30-minute conversation with someone who was sick upped the risk that people might catch COVID-19, the disease caused by the virus.

In short, one of the very things that makes us human â€” uttering feelings and ideas out loud â€” can now be a deadly threat.

The louder the communication, the more risky it is. Much like coughing, any kind of yelling, laughing, or singing can project infectious bits of virus into the air towards others, launching those particles further than quieter tones.

Derek Thompson at The Atlantic went so far as to recommend in August that we should “shut up” almost entirely when out in public right now.

“It makes sense to encourage quiet talking, or even whispering” during a pandemic, epidemiologist Saskia Popescu told Insider in an email, though she stressed that being quiet should never be considered a substitute for wearing masks, socially distancing, and avoiding crowds.

But don’t start shushing your neighbours just yet. Verbal communication is a vital way to keep us healthy at an otherwise isolating time, according to linguist Deborah Tannen. We just have to find ways to do it more safely. 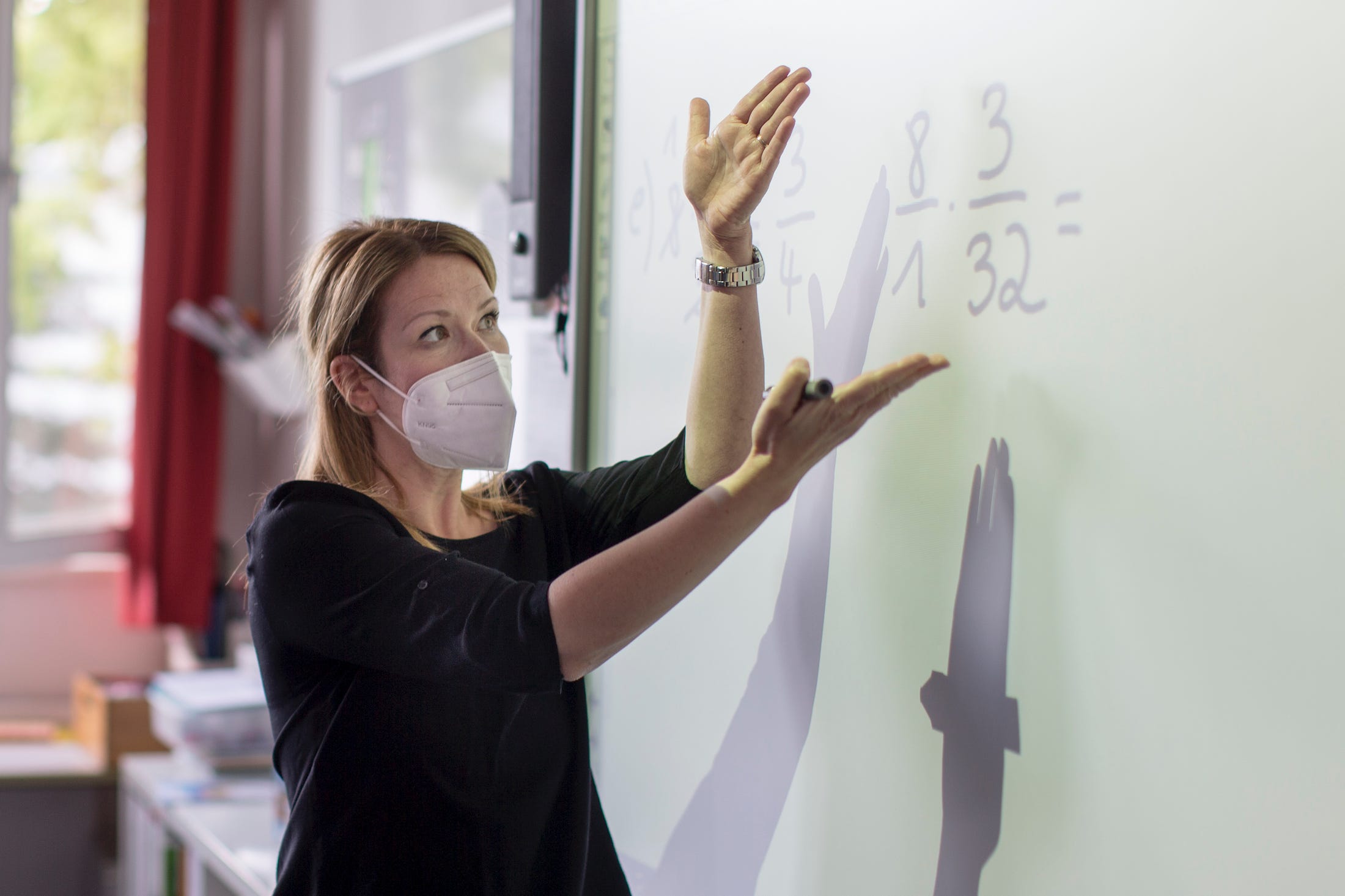 Christian Ender/Getty ImagesA teacher explains mathematics during a lesson with sixth graders, who are sitting at socially-distanced desks, on the second day back at class since March (during the novel coronavirus pandemic) on May 5, 2020 in Berlin, Germany.

Talking loudly is dangerous because it can project more virus-loaded spit into the air than sitting quietly would.

When we communicate verbally, we release both large, heavy droplets and tiny aerosols that are smaller and can stay aloft longer in the air. The more forceful the spray, the likelier it is to waft over to someone else, entering their eyes, nose, or mouth.

Keeping a distance from the people you’re chatting with, and avoiding yelling and spitting when you converse is key, but not everyone is accustomed to this.

As a New Yorker, Tannen says her own speech mannerisms may be especially dangerous.

Her speech is relatively quick, it’s loud, and it’s direct, and she’s not afraid to get personal â€” she’ll even stand very close to you to get her point across.

“I call it a high-involvement style, that you show you’re a good person by emphasising your involvement or connection to other people,” the linguistics professor at Georgetown University and author of the new book “Finding My Father,” said.

Folks from the Midwest, she said, might take a more standoffish approach to their chats. Tannen calls this approach a high-considerate style, “where you show you’re a good person by not imposing on other people,” she said.

The amount of spit we swap is not just determined by our volume and proximity to others. The language we speak matters too. For example, Chinese and English are generally considered more spitty by nature than, say, Japanese.

There’s even been some suggestion by researchers that one of the reasons why there were no probable cases of SARS in Japan during that global outbreak in 2002 and 2003, while more than 70 people were diagnosed with the illness in the US, is because Japanese doesn’t have the same forcefully-exhaled breaths in front of p’s, t’s, k’s q’s, ch’s and c’s that Chinese and English do.

With the novel coronavirus, too, infection rates have been generally lower in Japan, raising questions about whether the Japanese language and manners of speaking may play a role in preventing transmission.

Scientists from the National Institutes of Health and the University of Pennsylvania school of medicine recently watched as people uttered the English phrase “stay healthy,” with its explosive ‘t’ and ‘th’ sounds, which they hypothesised might spread virus easily (confirming that suspicion in the lab would be a highly unethical form of research.)

They estimated that just a minute of loud talking generates “at least 1,000 virion-containing droplet nuclei that remain airborne for more than 8 minutes,” potentially triggering coronavirus infections if they are inhaled by others.

The atmosphere we’re in when we talk is also important, as stagnant, stale air can turn speech into a “slowly descending cloud, emanating from the speaker’s mouth,” those same study authors said.

Like every other precaution, talking softly is only one part of an interwoven system. Being around sick people, whether they speak or not, is always risky, especially when the interaction is indoors and they are just starting to get sick.

Being quiet could make large gatherings safer, but they’re still not risk-free 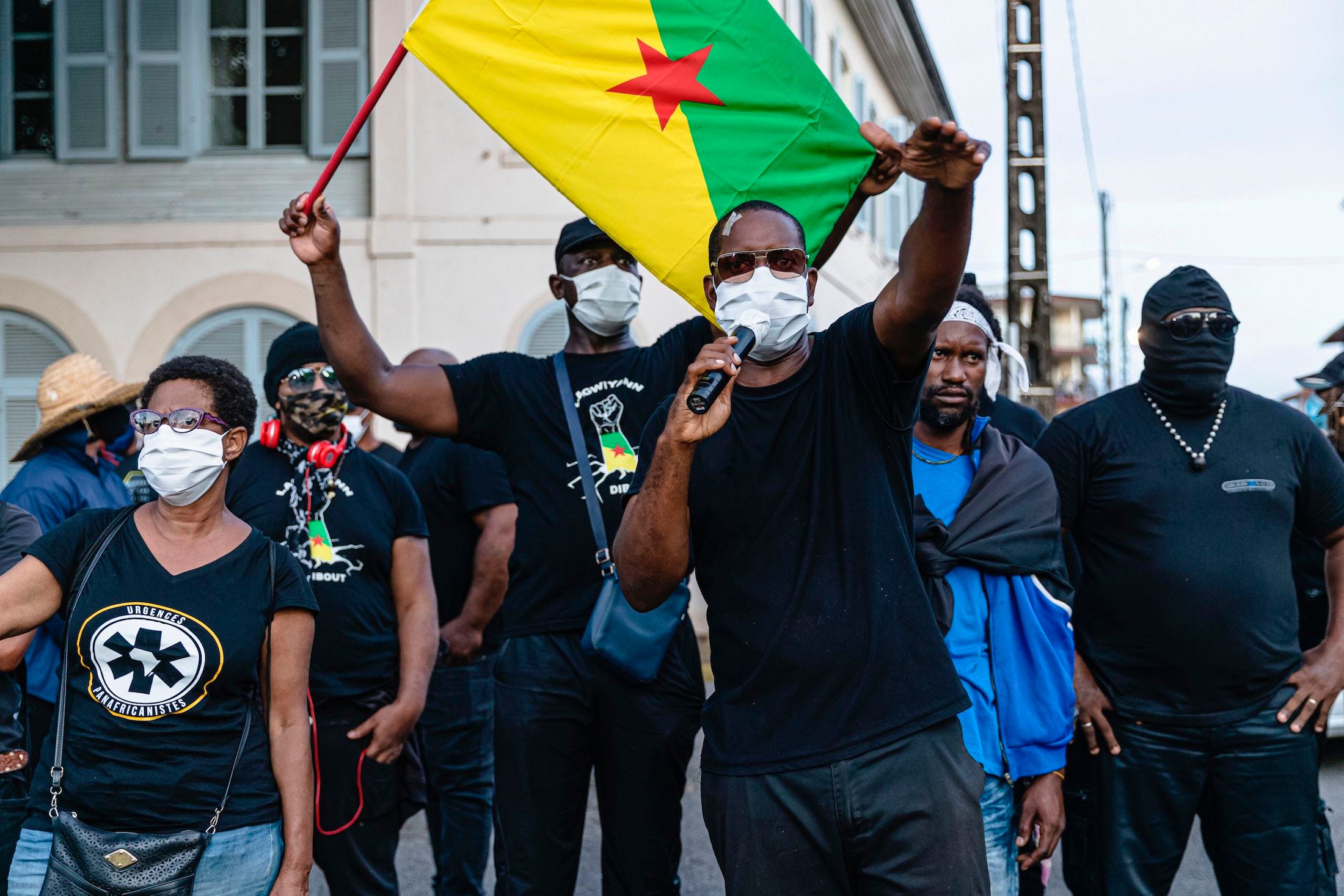 Jody Amiet/AFP via Getty Images‘Trop Violans’ collectif member Olivier Goudet speaks to masked protesters gathered in front of the Prefecture of Guiana in Cayenne, French Guiana on July 22, 2020, as France’s South American territory is reeling from a surge in COVID-19 cases.

When it comes to catching the coronavirus, there’s nothing more dangerous than being indoors, in a poorly-ventilated space, with lots of people.

Outdoor gatherings, where there’s near-infinite space for virus particles to dissipate, are safer, but crowds should still try to be quiet, according to Renyi Zhang, a professor of atmospheric sciences and chemistry at Texas A&M.

As A&M football games go on this year (at reduced capacity, with masks), Zhang thinks trying not to yell or cheer could help prevent the virus from floating around in the stands.

He, for one, won’t be in attendance this year. 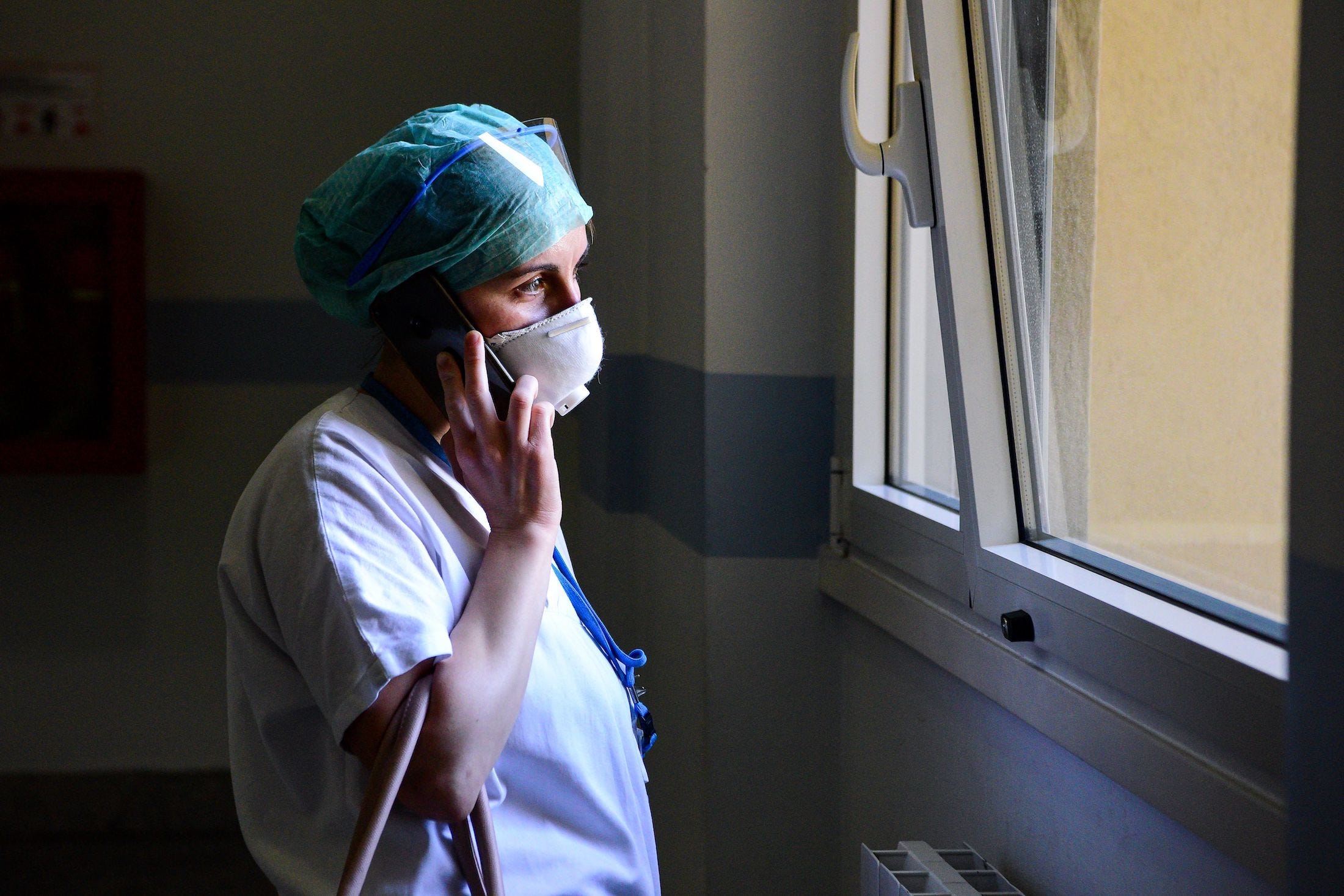 Being totally silent until the pandemic is over is not a winning game plan.

“Talking to people is our fundamental way of being human, and getting through the world,” Tannen said.

Talking is also often the point of getting together face to face.

“The idea that you should not talk is ridiculous,” she added. “We have enough to worry about.”

Instead, the 75 year-old’s found other ways to stay safe and still communicate. When she got together recently with a friend from Arizona, where cases were high, she was so cautious about sharing any infected air that the pair sat “significantly further than six feet apart,” she said.

Then, they each picked up their cell phones for a socially-distanced version of a face-to-face chat.

“As long as you’re six feet apart, you’re wearing masks, I don’t think you should worry about how much you talk, or whether your language has plosive p’s or not,” she said.

Zhang said, similarly, that a classroom or an office with a few people inside is “probably ok,” and people shouldn’t be worried too much about keeping their voices down very low, or whispering, which could only serve to push people closer to one another, and promote spread.

Silent or loud, it’s going to be quite a while before we can safely gather in big groups indoors again.

Dr. Anthony Fauci recently said we should wait until a safe, effective vaccine “has been around for almost a year,” enough time for most of the population to get inoculated, before we start packing into theatres unmasked again.

“Instead of going to the theatre at night and getting together with friends, we’re Zooming with friends and having a lot of dinners at home,” Tannen said.

Update: This story was first published on September 12, 2020. It has been updated with information from a new study in Singapore that suggested long conversations can easily spread the novel coronavirus.

Correction: An earlier version of this story suggested that talking to a sick person might be more dangerous than sharing a bedroom with them, but because the study measured those two factors independently, they cannot be compared head to head.