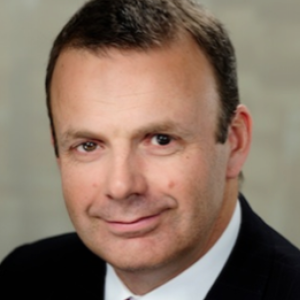 Michael Thorpe is the Managing Director, Global Head of Infrastructure and Utilities, for the Commonwealth Bank. He is responsible for strategic advice, client relationships and financing across the utilities sector globally. This includes operations in Australia, Asia, Europe, the United Kingdom and the United States.

Infrastructure and Utilities is a major part of the Institutional Banking and Markets division of the Commonwealth Bank, which administers financial and risk management services for major corporate and government clients. The team directed by Michael creates sophisticated solutions for businesses seeking growth in a rapidly evolving environment. This includes customised funding arrangements and global markets derivatives products to suit projects across a range of assets, as well as comprehensive transactional banking options. Michael’s deep expertise supports vital national infrastructure such as energy and water utilities, hospitals, schools, prisons, roads, railways and ports.

Michael has nearly two decades of experience in senior banking roles. He was previously the Commonwealth Bank’s Managing Director, Project Finance, covering client asset acquisitions in the infrastructure, utilities and natural resources sectors. In this role, Michael significantly extended the bank’s global reach into Europe and North America. He was also the Head of Oil and Gas, where he focused on both upstream and downstream operations, as well as domestic and international liquefied natural gas projects.

In addition, Michael has held various executive and analyst roles in project finance at Lloyds Banking Group, Bank of Scotland and Westpac. He has worked in Sydney, Perth, Brisbane and London.

Michael’s background as a professional geologist gives him a unique perspective into both the scientific and financial dimensions of infrastructure and utilities markets. His industry leadership has been recognised with his appointment as Chair of the Asia Pacific Loan Market Association Project Finance Committee. Michael received a Bachelor of Science (Honours) from the University of Western Australia and a Graduate Diploma in Business from Curtin University.

MARKET INSIGHTS: Why execution is everything in modern Australian infrastructure projects

Click here to download this report in PDF. Given Australia’s infrastructure backlog, it’s such a welcome sight to now have large volumes of new developments underway – from big projects in the planning stages to those already with cranes at work and concrete being poured. However, delivering this pipeline of […]