Australia's extreme lockdown brought coronavirus cases in its epicentre to zero. It may also have prevented a third wave. 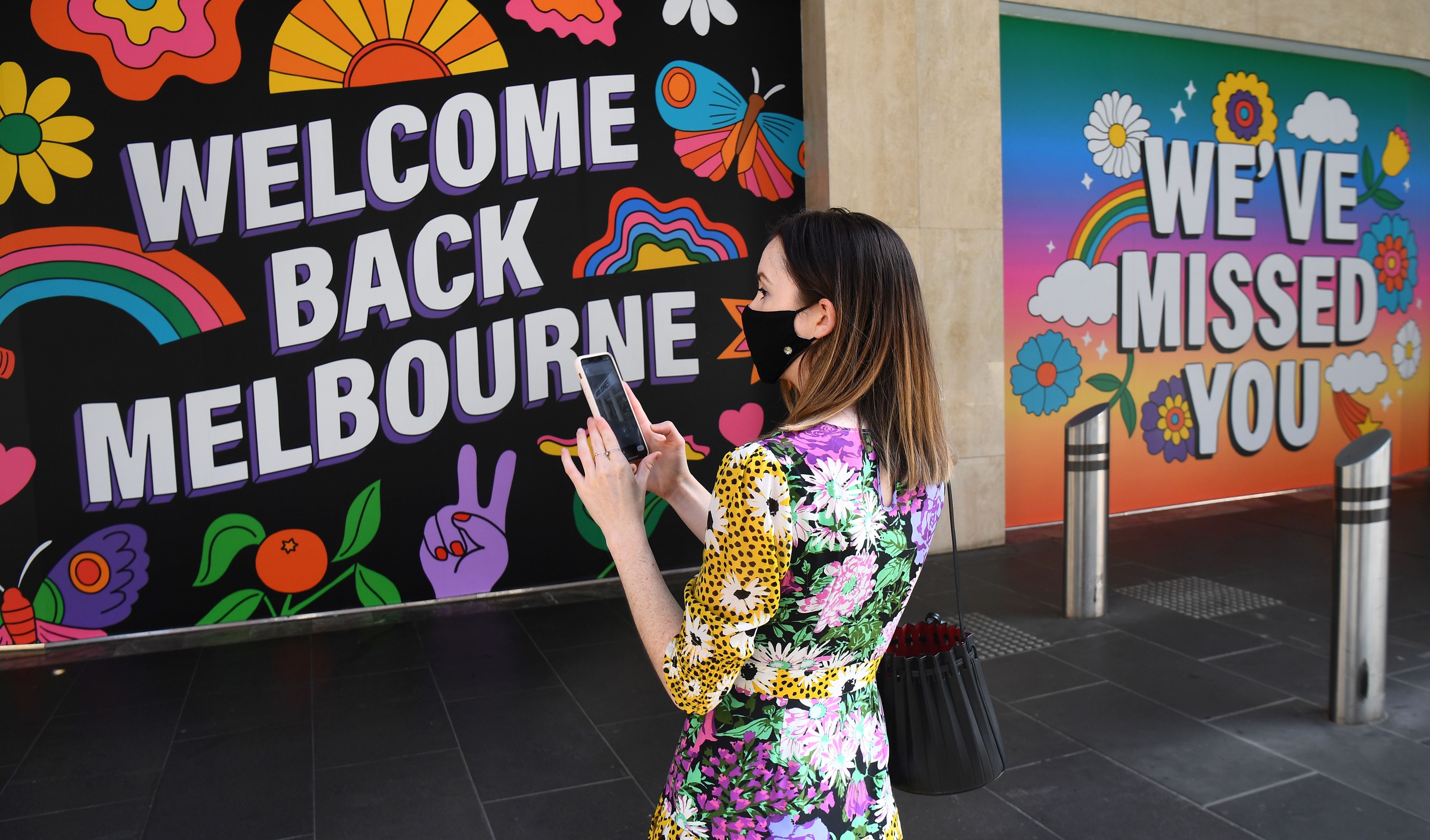 William West/AFP/Getty ImagesA woman stands in front of posters after measures to curb the spread of COVID-19 were eased in Melbourne, Australia, on October 28, 2020.

At the peak of its coronavirus outbreak in late July, Australia recorded more than 700 daily cases.

The outbreak was concentrated in the southern state of Victoria, which has tallied roughly three-quarters of Australia’s total coronavirus infections and more than 90% of its coronavirus deaths. But Victoria recorded zero new COVID-19 cases on Monday â€” a milestone it hadn’t reached in more than four months â€” and zero again on Tuesday.

That victory came after a sacrifice: Victoria’s capital city, Melbourne, was under lockdown for 111 days. During that time, residents were only allowed to leave home for essential work, exercise or recreation, care or caregiving, and shopping for food or other essential items.

“It’s been a brilliant success,” Adrian Esterman, an epidemiologist at the University of South Australia, told Business Insider. “There’s been a huge cost to people’s mental health and lots of people out of work, but it’s worked.”

Australia had an advantage over most countries from the start: It’s an island with relatively low population density. But its rules were still far stricter than in many other countries. For several months, Melbourne residents could only travel within 5 kilometers (3 miles) of their homes. In October, the Victorian government expanded that radius to 25 kilometers.

As of August, essential workers could be fined up to $US1,652 ($US1,165 US dollars) for not carrying a permit while travelling to and from work. There were also fines for not wearing a mask in public: As of July 22, Melbourne residents ages 12 and older were required to wear face coverings outside their homes or risk a $US200 ($US141 US dollars) penalty. Businesses that discouraged employees from wearing masks could face a $US9,913 ($US6,992 US dollars) fine.

On top of that, Melbourne restricted public gatherings to just two people or a single household starting in July. Then in August, the city imposed a curfew that prohibited residents from going out between the hours of 9 p.m. and 5 a.m. By late September, Melbourne started allowing public gatherings of five people from two households, but any more than that and violators could be fined $US4,957 ($US3,497 US dollars).

“There have been lots of people who argue that they were too severe, that perhaps we could have got down to a low number of cases without some of the heavier restrictions they put in, and for so long, but we can’t go back,” Esterman said. “The fact of matter is that the restrictions they did put on have worked. We’re now at zero cases.”

Australia’s government started testing and contact tracing in late January, when it had only detected a handful of cases. In mid-March, as cases started to rise, Australia banned gatherings of more than 500 people and told anyone arriving from outside the country to self-isolate for two weeks.

“Nearly all the cases were imported â€” in fact, they were all imported,” Esterman said. “So at that stage, it was manageable and Australia did extremely well. We acted very, very early, not like a lot of other countries.” Australia closed its international borders on March 20. Two days later, the nation began shutting down non-essential businesses, including pubs, gyms, movie theatres, and places of worship. By then, testing was already free and widely available (though some residents did encounter long lines).

Some Australian states even chose to seal off their borders from other parts of the country.

“There are parts of our country, Western Australia, which have had their borders closed since the start of the year,” Dr. Meru Sheel, a senior research fellow at Australian National University, told Business Insider. “They haven’t opened their border, even when things were better in May, June in the rest of the country.”

But Victoria was slower to identify and isolate cases than most other states.

“The Victorian government for years has not put enough money into public health, so their contact-tracing systems weren’t up to scratch,” Esterman said. “The final nail in the coffin was that the Victorian government didn’t do a very good job at communicating to the public, especially the migrant communities.”

That has changed, though, he added.

“They’re better trained. They have got better systems in place now,” Esterman said. “And the Victorian government has been much better at communication.”

On Wednesday, Victoria began to roll back various lockdown restrictions. Workers are no longer required to carry a permit when they commute. Thousands of shops, cafÃ©s, and restaurants are allowed to reopen. Weddings and religious services are also permitted outdoors, with limits on gathering sizes.

“Now is the time to open up,” Victoria state Premier Daniel Andrews said on Monday. “We’ve have been able to bring this under control. A day of zero cases is an amazing achievement.”

Australia may have prevented a third wave

Australian public-health officials are optimistic that the country now has the infrastructure to quell future outbreaks without another full-scale lockdown.

“There’s a very, very low probability of a third wave,” Esterman said, adding, “what I think will happen in the next few months is that we’ll have open borders inside Australia and potentially with New Zealand, but I can’t see us having international borders for quite some time.” That doesn’t mean transmission is gone for good throughout Australia, though. This month, New South Wales linked a cluster of new cases to a suburb in Sydney. But contact tracing has prevented local cases from spiking too dramatically so far.

“New South Wales has done incredibly well in not letting the second wave have a strong hold,” Sheel said.

In countries like the US, however, coronavirus outbreaks have simply grown too large for health workers to test, trace, and isolate every case.

“When you start getting the numbers of cases in the hundreds and potentially thousands, it’s almost impossible for contact tracers to be effective,” Esterman said. “It wasn’t until Victoria got down to less than 100 cases a day that the contact-tracing team could really be effective. Before that, the only way you can stop it is to physically stop people from moving around.”

Victoria’s playbook, both Sheel and Esterman said, was the most straightforward approach to lowering viral transmission.

“It’s an old-fashioned, traditional, prevention-measures- and contact-tracing-oriented public-health response,” Sheel said. “It’s not rocket science from that perspective. What really has made us stand out is the fact that we follow scientific advice to whatever degree possible.”