I visited the world's highest restaurant at the top of Dubai's Burj Khalifa, and don't know why anyone bothers with the official observation deck 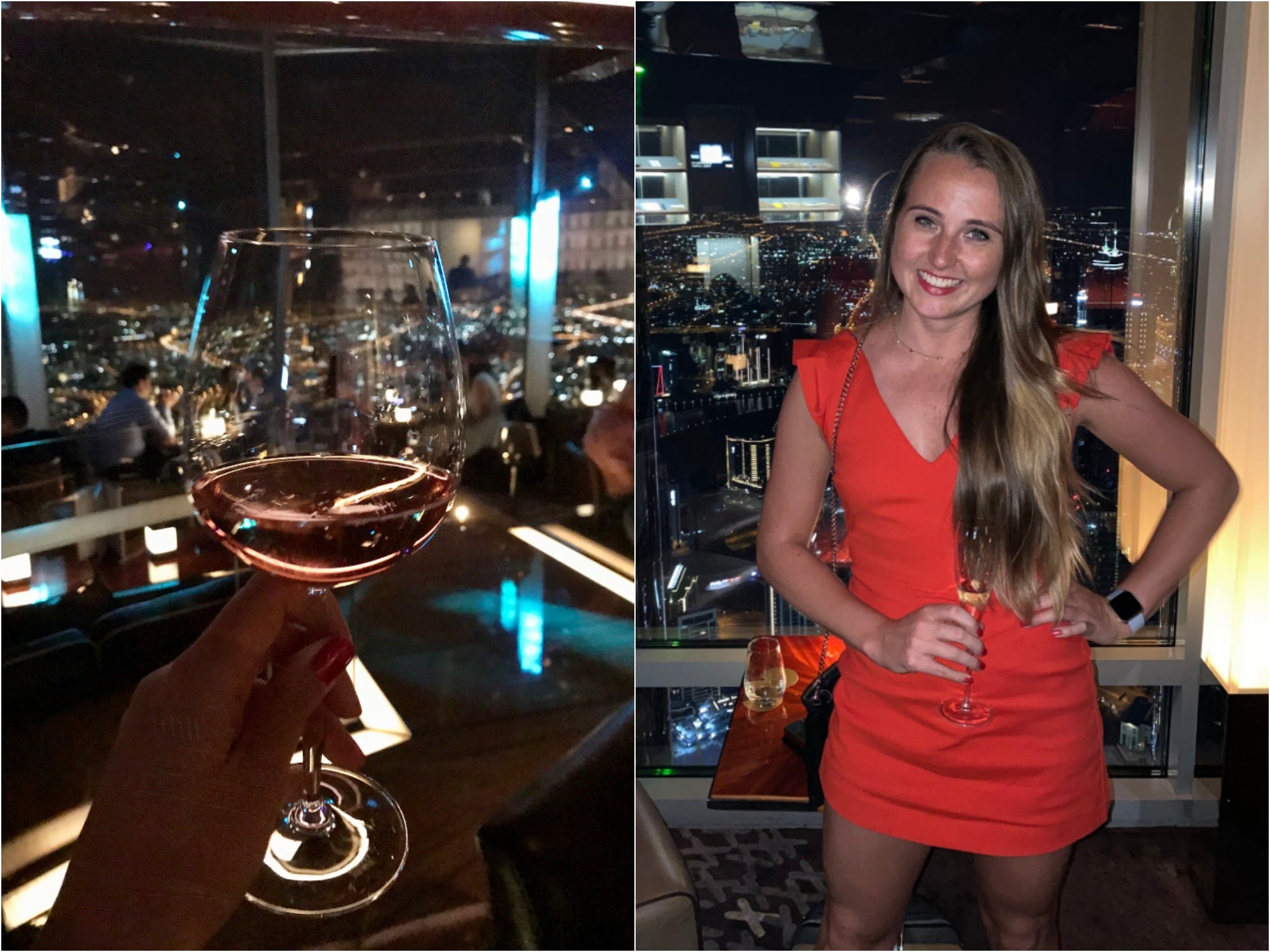 I am not someone who does things “off the cuff.” I do not tend to “wing” anything.

No, I am a planner, organised to a T, and always do my research – never more so than when abroad.

But even I required two attempts to visit Dubai’s most famous bar and restaurant, Atmosphere, successfully.

A sizeable 442 meters above the ground at the top of the Burj Khalifa, a visit to the world’s highest restaurant was, well, high on my to-do list when visiting Dubai at the end of 2019.

Unsurprisingly, there was a dress code: “smart/elegant” for the restaurant, “smart/casual” for the lounge, and a list of prohibited items of clothing including “trainers, caps, T-shirts, sports clothing, shorts, open shoes for men, and flip-flops for women.”

While you can technically go slightly higher than Atmosphere to the Burj Khalifa observation deck, many people had told me, and Business Insider’s Harrison Jacobs had previously reported, that it’s “a colossal waste of time.”

You can admire the same view from Atmosphere, people said, and for the price of the 149 AED ($US40) observation deck entry fee, you can get yourself a drink to enjoy. So that was my plan.

The first time I tried to visit Atmosphere it was the afternoon and I was in the mall at the bottom of the Burj Khalifa with my colleague, Sinead Baker. We knew we had to go through the Armani Hotel to get to Atmosphere, but we couldn’t find it (despite attempting to follow the mall’s navigation system). 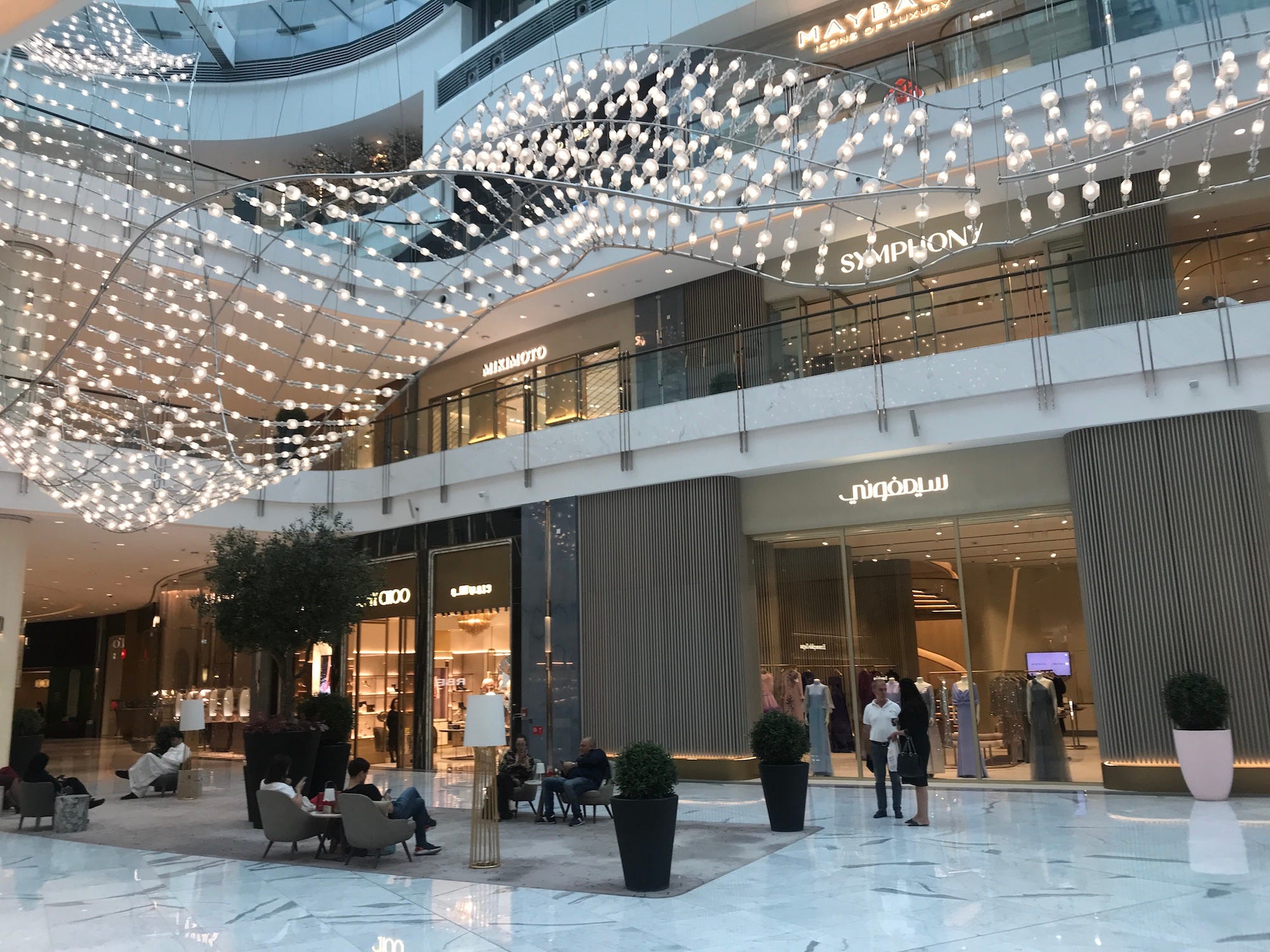 We asked for directions yet again, and were told you can’t access the hotel from the mall. Good. We ventured outside. 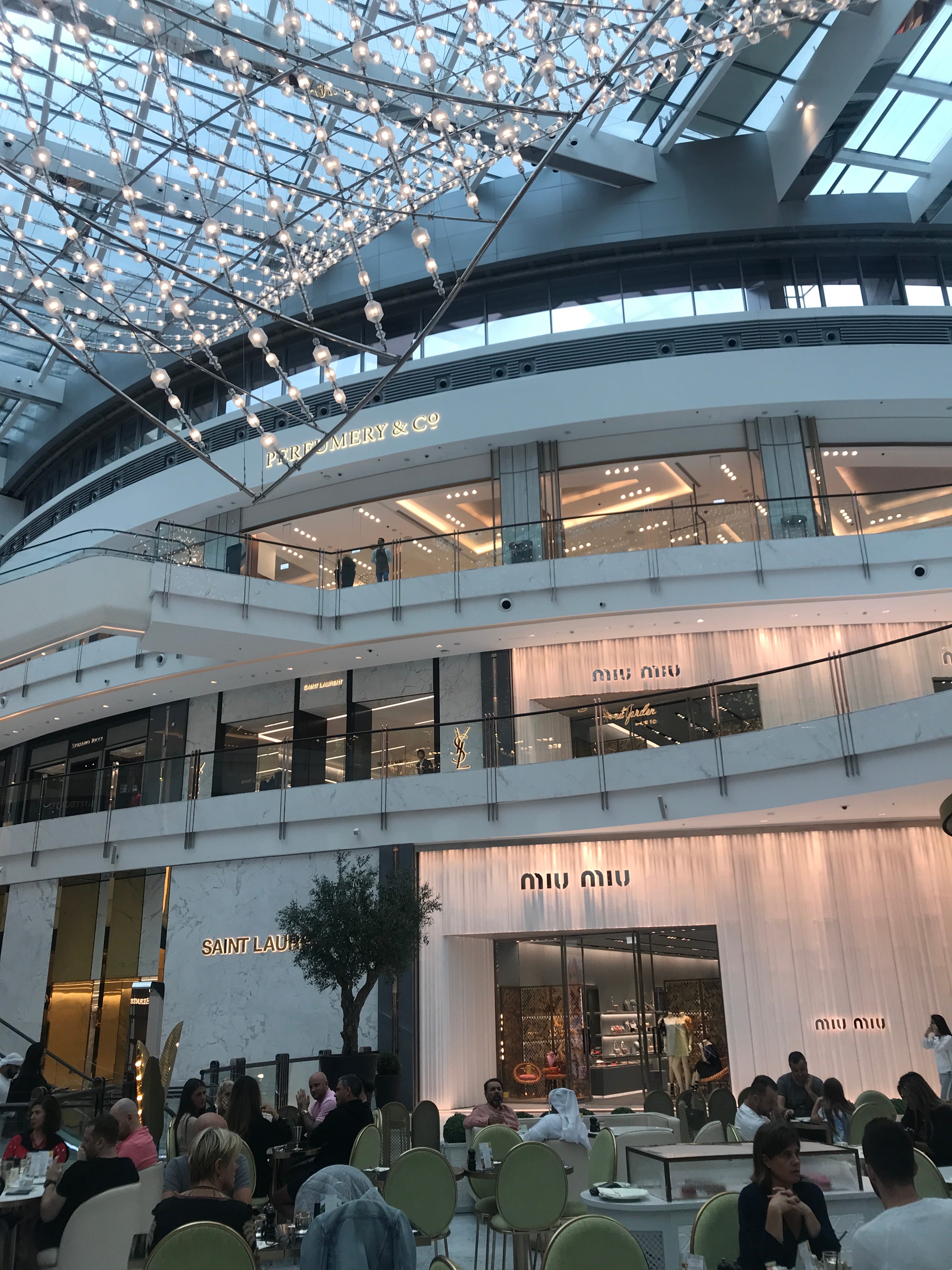 Having exited the building, we could see where we wanted to go, but were still entirely confused as to how to get there. The Burj Khalifa really is impressive though. And tall. So tall, in fact, that we were unable to fit the whole thing and me in a photo. It was incredibly challenging to find the entrance to the Armani Hotel on foot — there were no signposts. No one walks anywhere in Dubai, and we got lots of strange looks for being pedestrians. 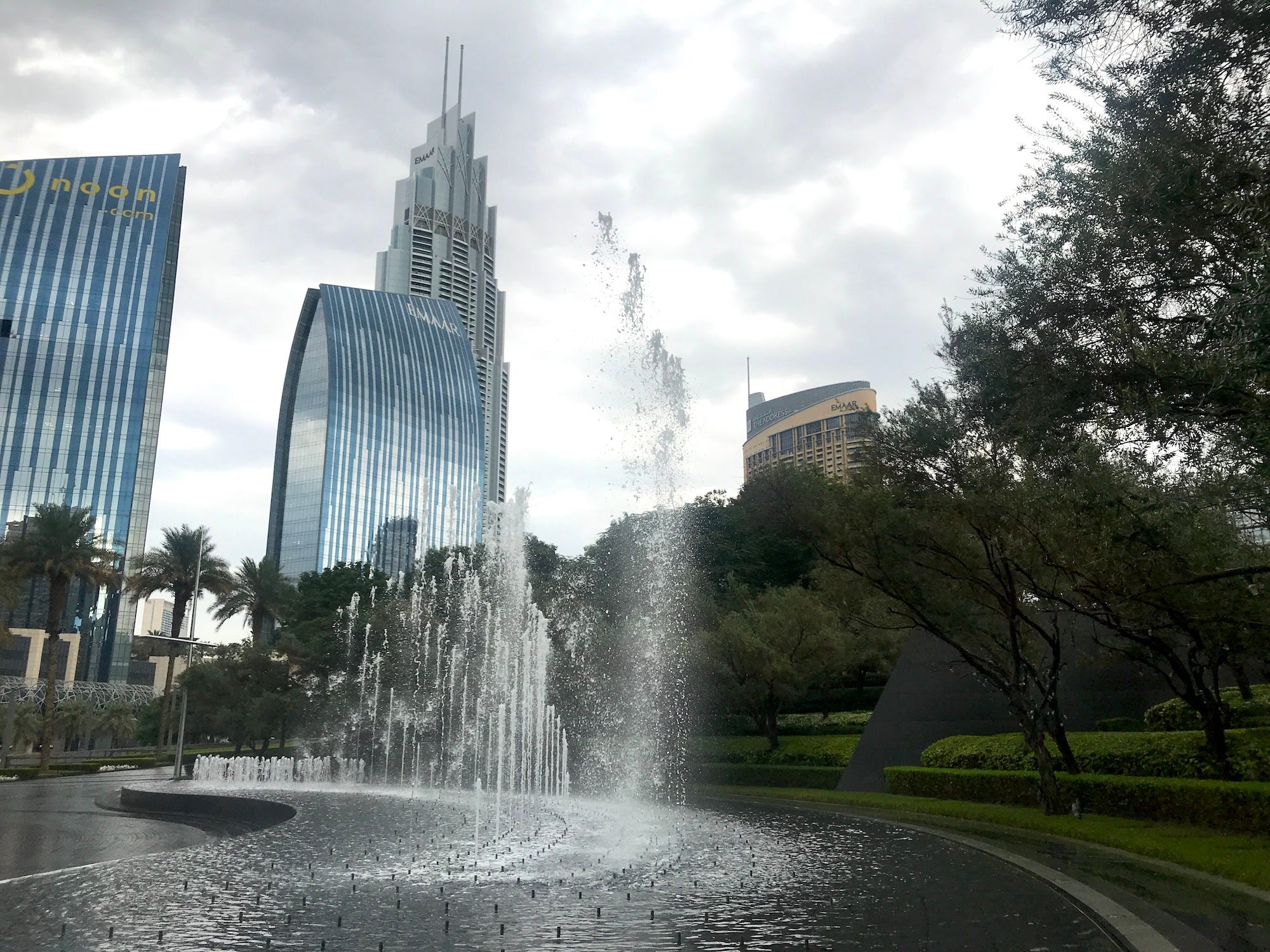 We ultimately found what we thought was the driveway which would lead us the right way. Possibly the only people to have ever arrived on foot, a security guard actually came out to ask us what we were doing. But we finally made it to the entrance of the hotel. Once inside the lobby, it was no clearer how on earth we got to Atmosphere — it isn’t signposted at all, you have to follow signs to the Corporate Suites. 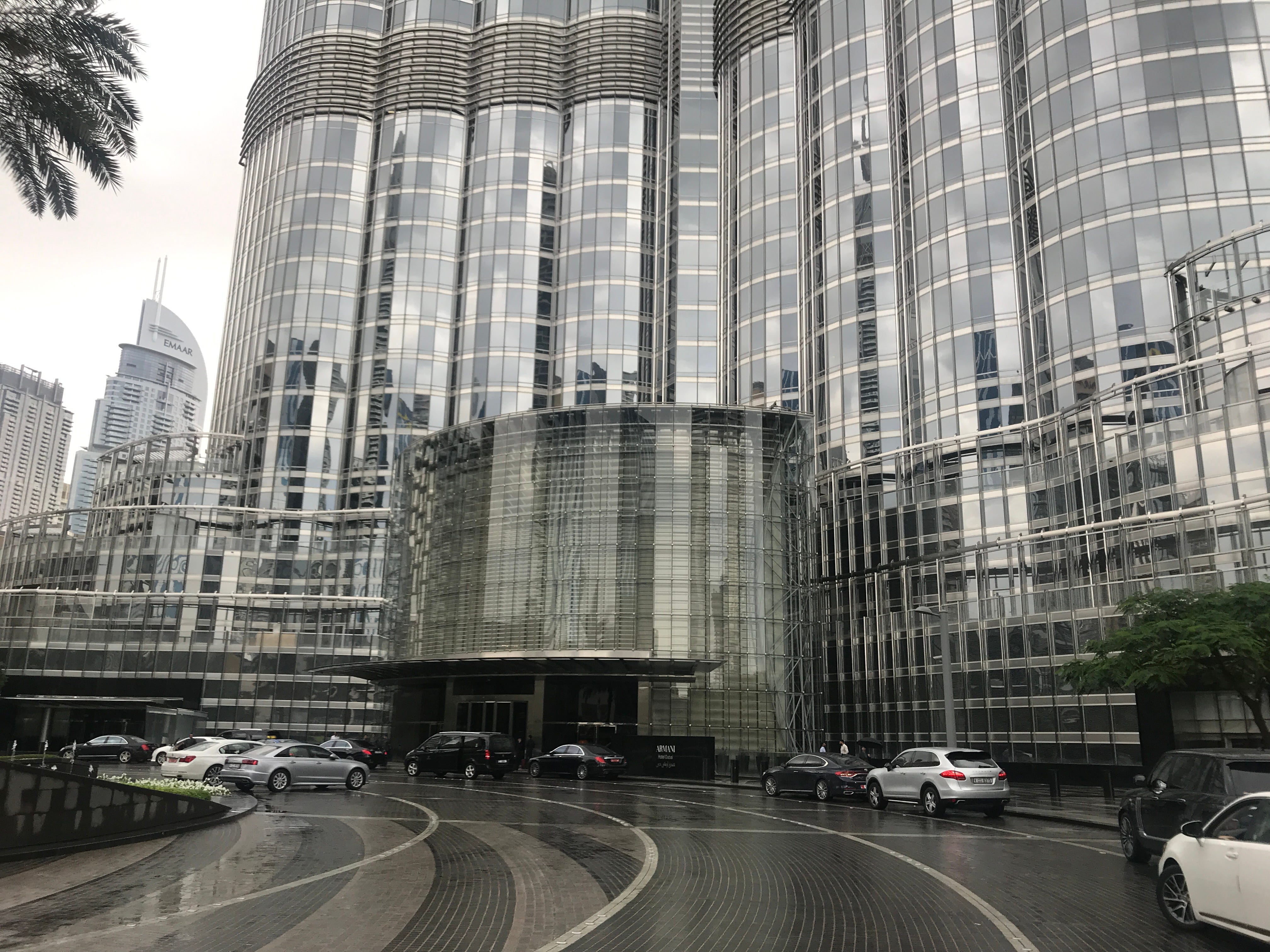 We asked for directions, and three elevators later made it to the restaurant’s reception (just one floor down) only to be told the minimum spend even for a drink was 200 AED ($US55) per person, and it wasn’t until 5.30 p.m. that there was no minimum. This was not on the website, and we’d planned our outfits accordingly — Sinead had even bought new shoes for the occasion. Dejected and exhausted, we gave up. 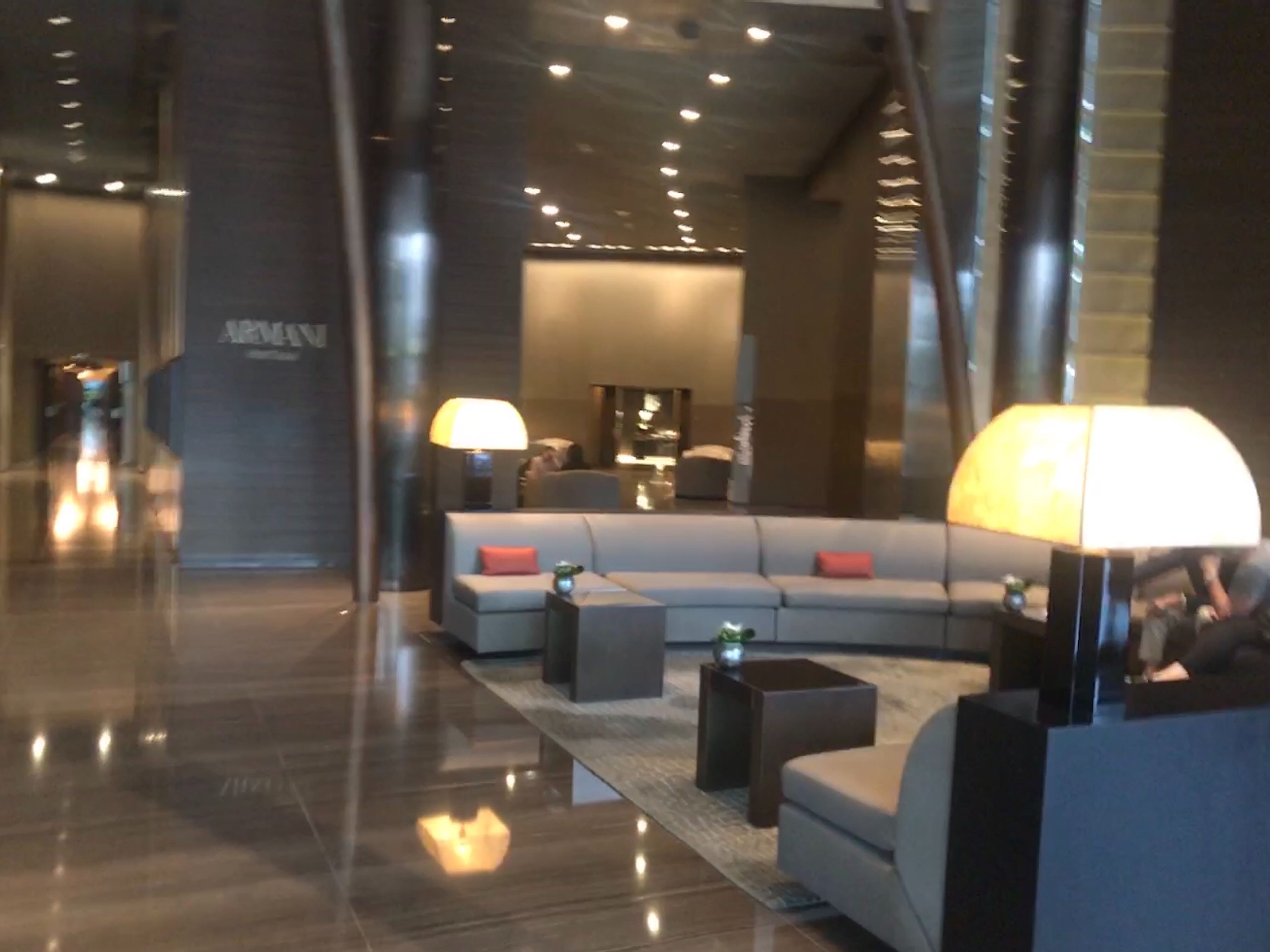 My second attempt came a few days later — Sinead had left but I wasn’t giving up so headed back to the Burj (this time in a taxi) on my own at around 9.30 p.m. for an after dinner drink. I was quite glad to know where I was going this time. 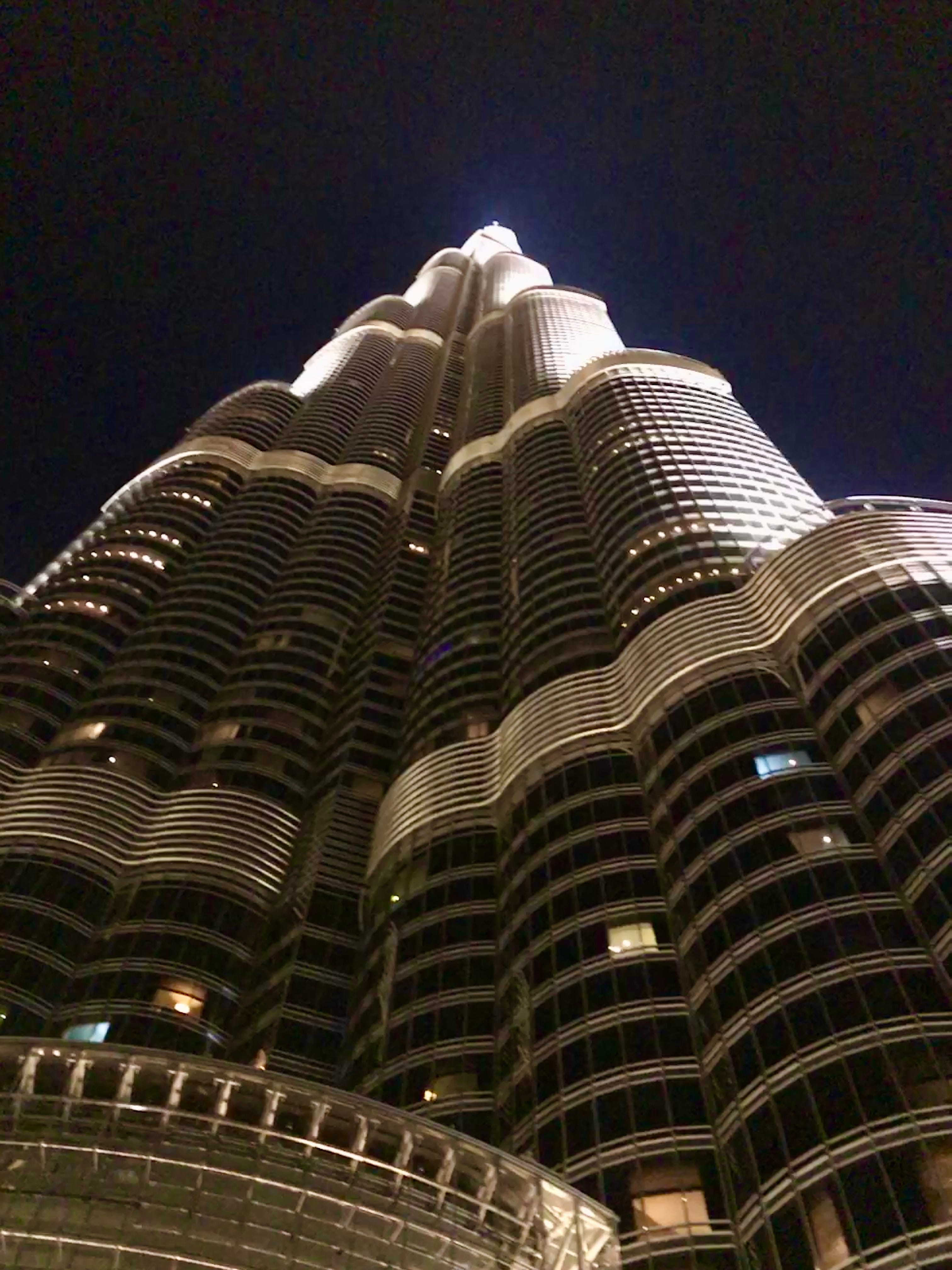 Not having a reservation, I was told to take a seat while the receptionist called up to see if there was space for me. In a playsuit and espadrille wedges, and seeing lots of dressed-up people, I was concerned. However, there were others coming down in sports shoes, jeans, and hoodies. Perplexing. 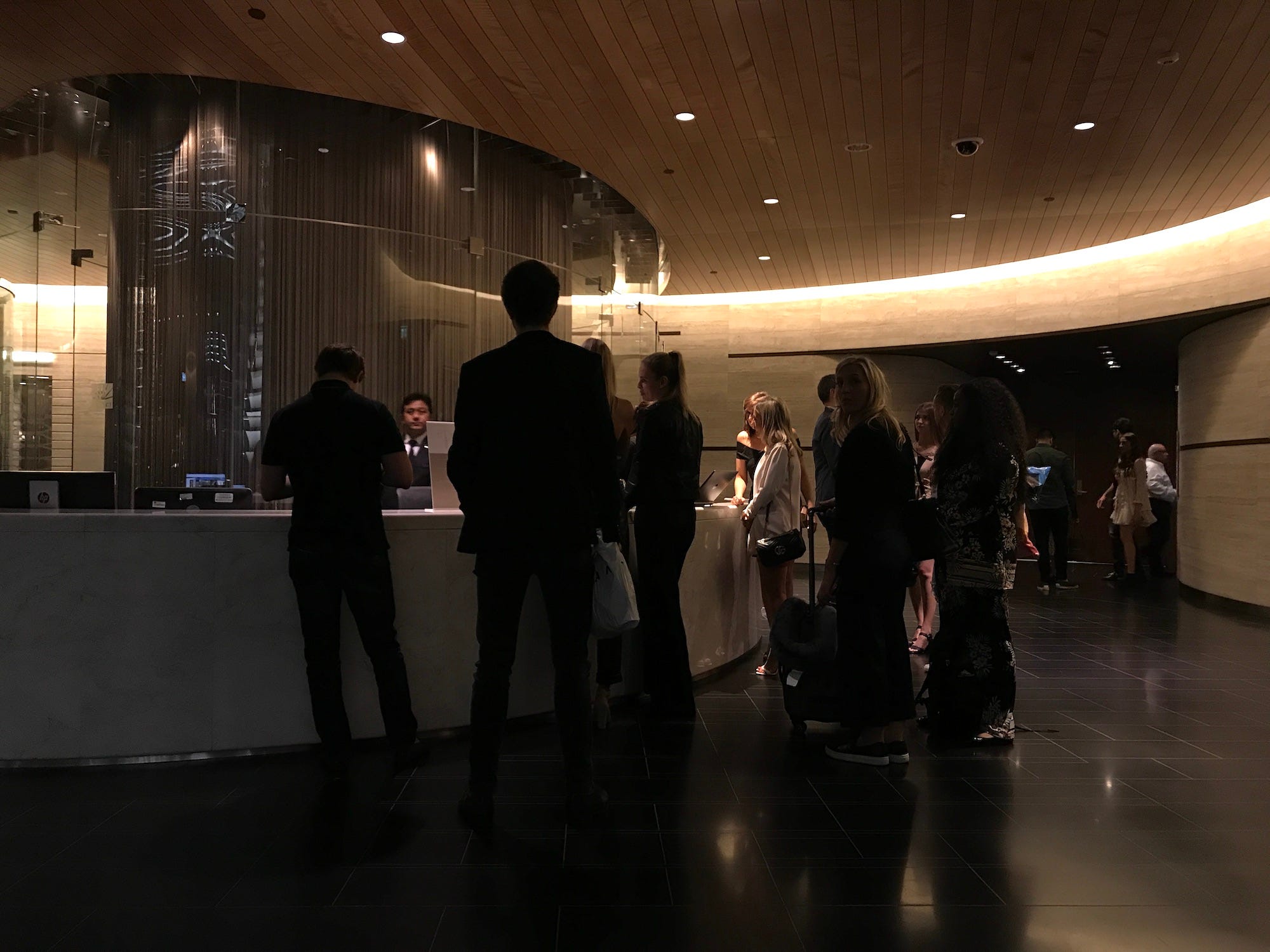 Fortunately, I was given the green light and hopped in the elevator which had just one option: floor 123, which was 442 meters up. Gulp. 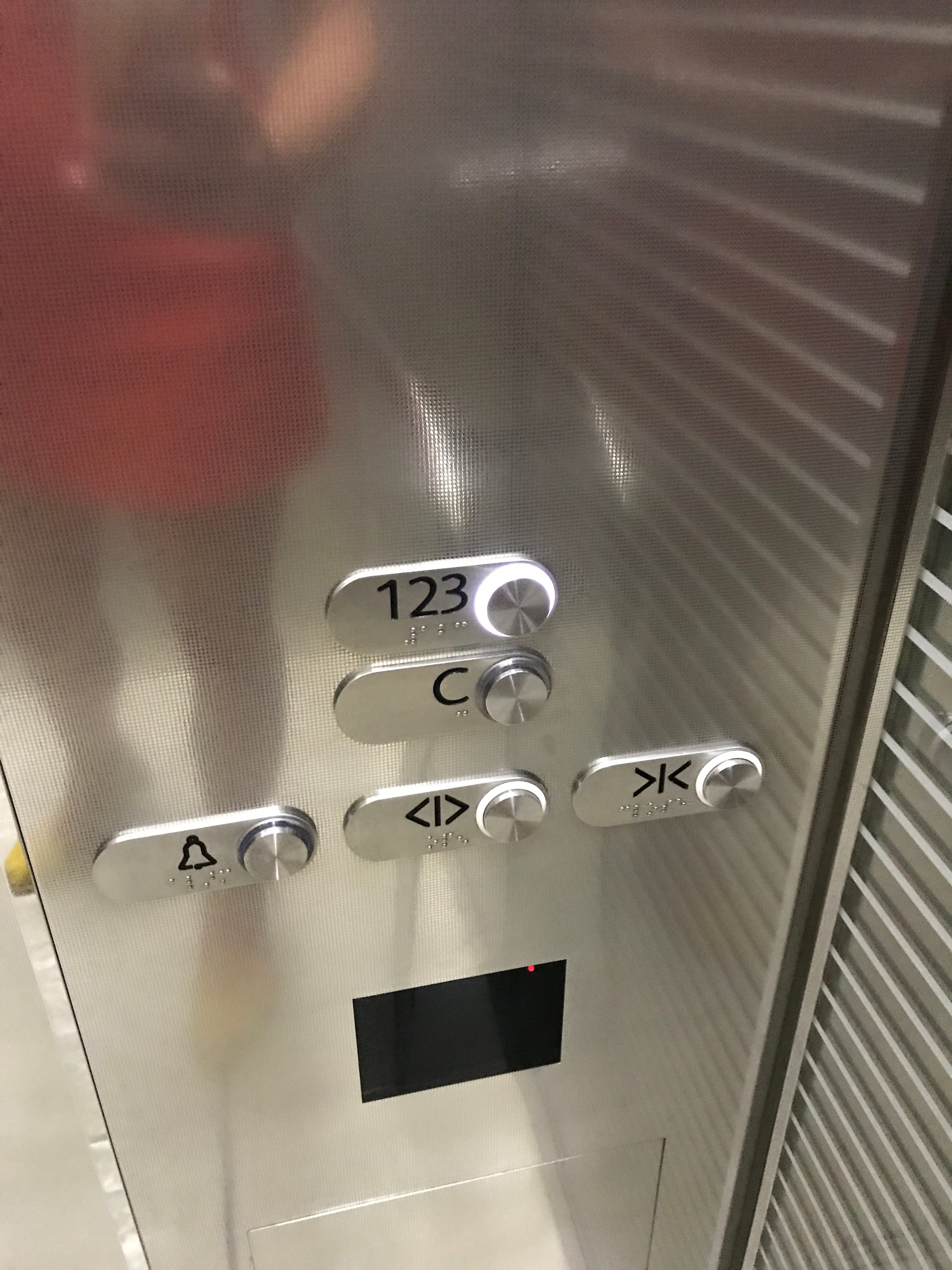 By the 33rd floor, my ears were popping. I thought it was a shame the elevator had no windows, as it would have been seriously cool to see the view. The longest elevator ride of my life later, I had arrived. 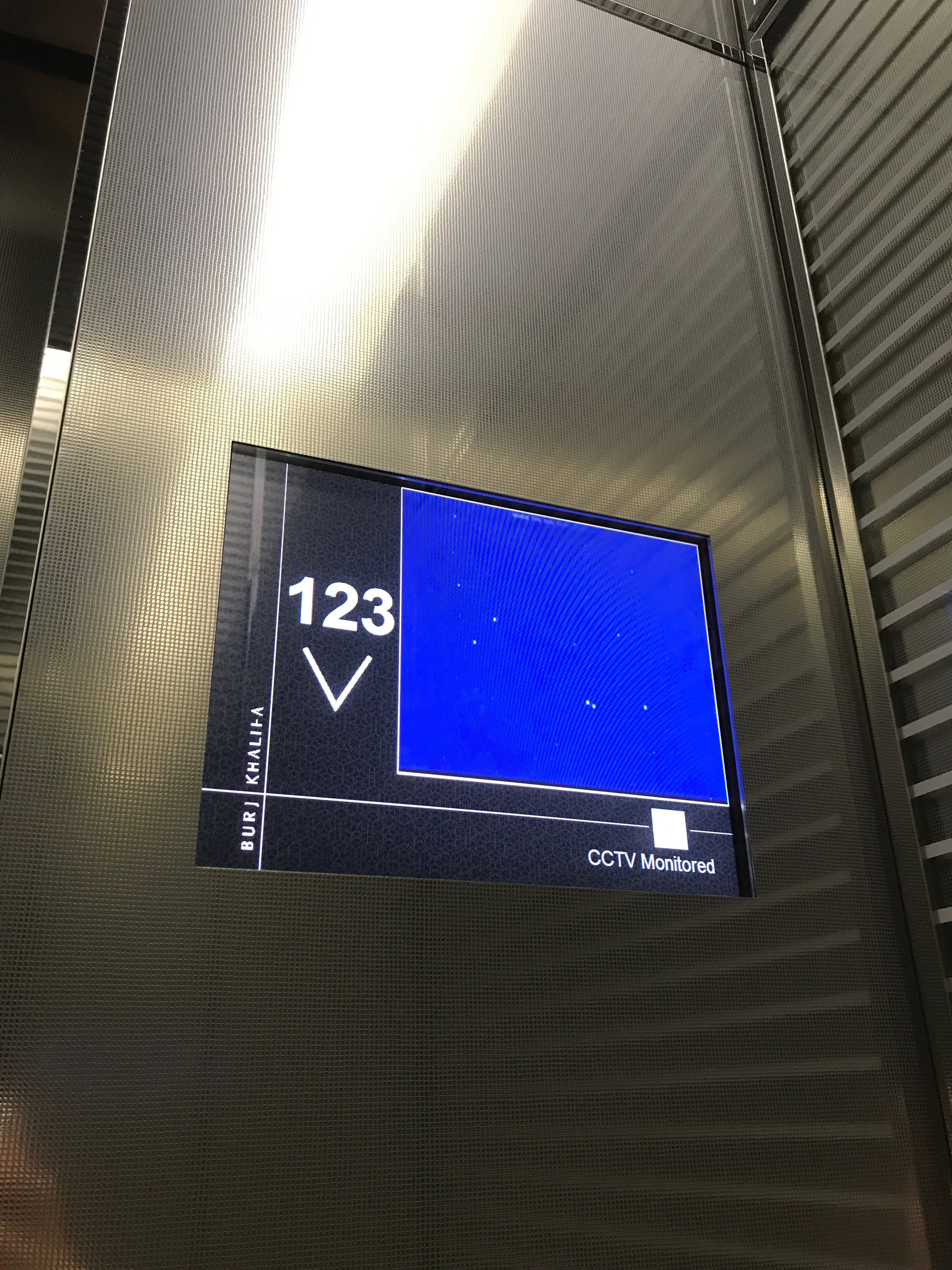 I emerged to a lobby area with floor-to-ceiling windows and walked down a spiral staircase to another reception. 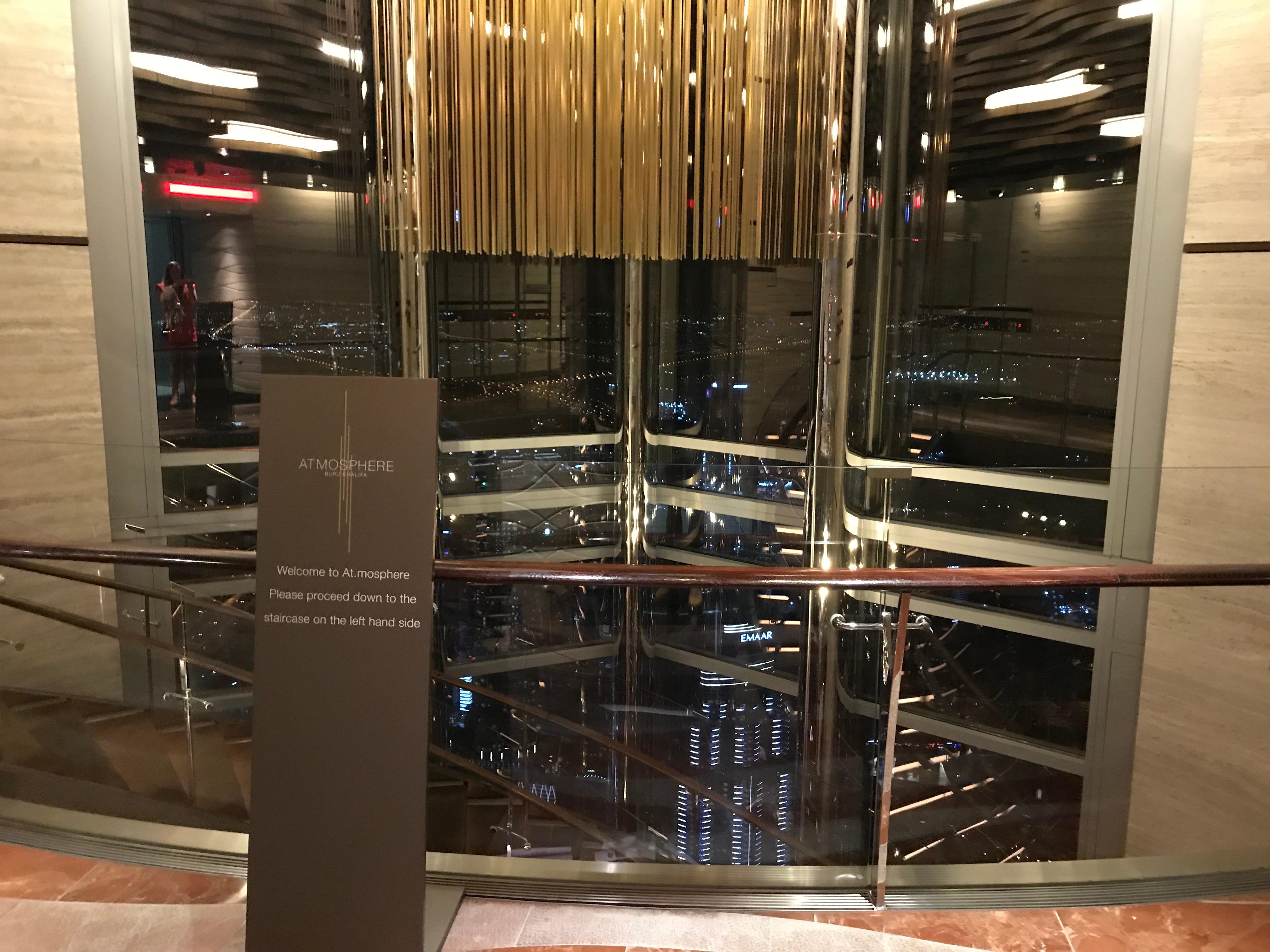 The restaurant was on the right, but I was going to the left, to the lounge. Even from the back of the room, the views from the floor-to-ceiling windows were breathtaking. 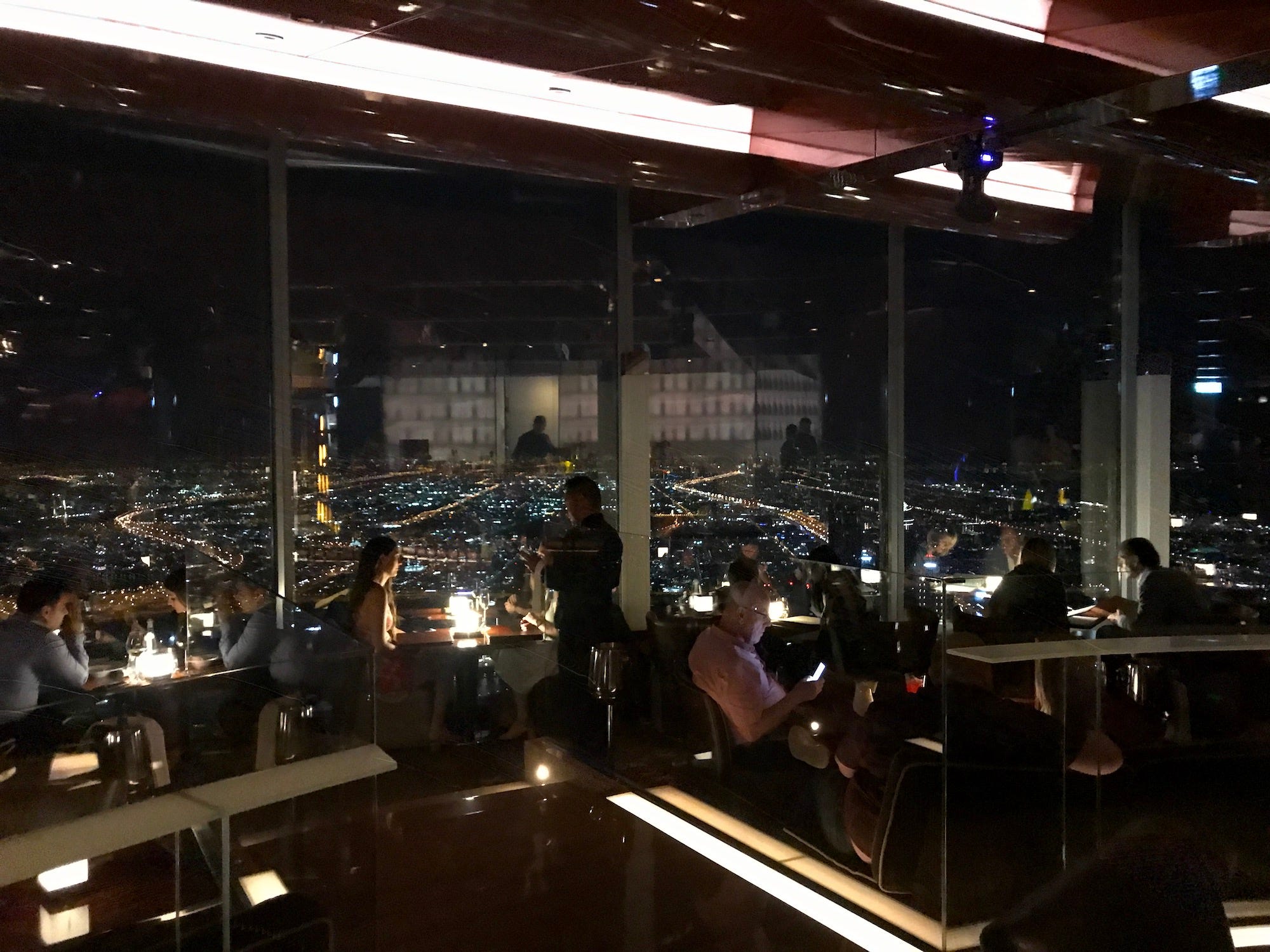 I was shown to one of nine seats at the bar. It was elegant, sleek, and this being Saturday night, there was a fun vibe, with good music and what I would call “party lights” moving around the room. 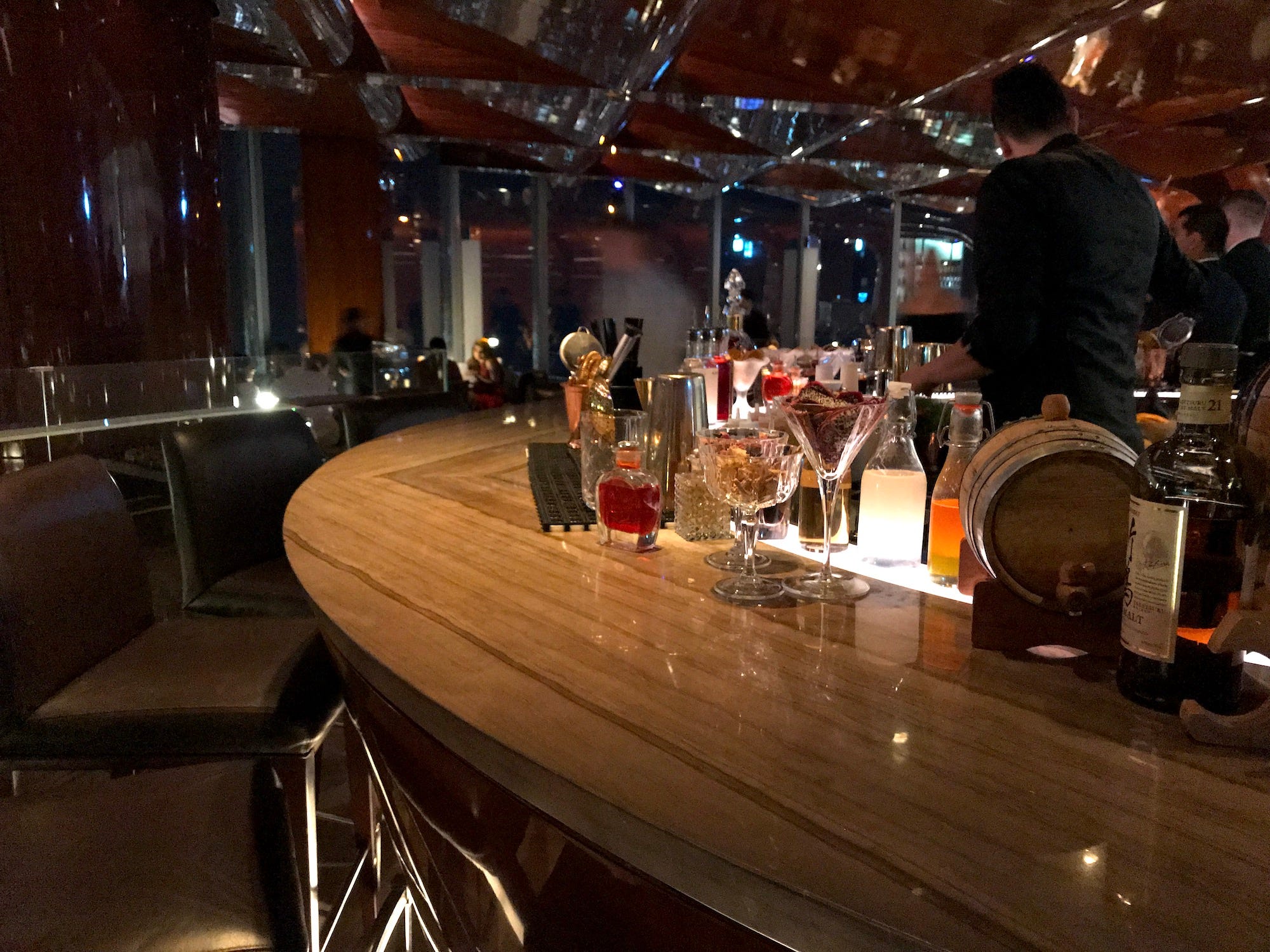 No one brought me a menu (maybe they thought I was waiting for someone), but I asked for one and ordered a small glass of the Domaine des Nouelles Rosé d’Anjou for the princely sum of 95 AED ($US26). At least it came with a generous portion of nibbles: plump juicy olives and a Bombay spice style mix of peanuts, crunchy corn, peas, and savoury snacks. It wasn’t the best wine I’ve ever tried, and it really was a tiny amount, but I was there for the view really. Assessing the rest of the clientele, I realised it was mainly pairs, but not just couples. 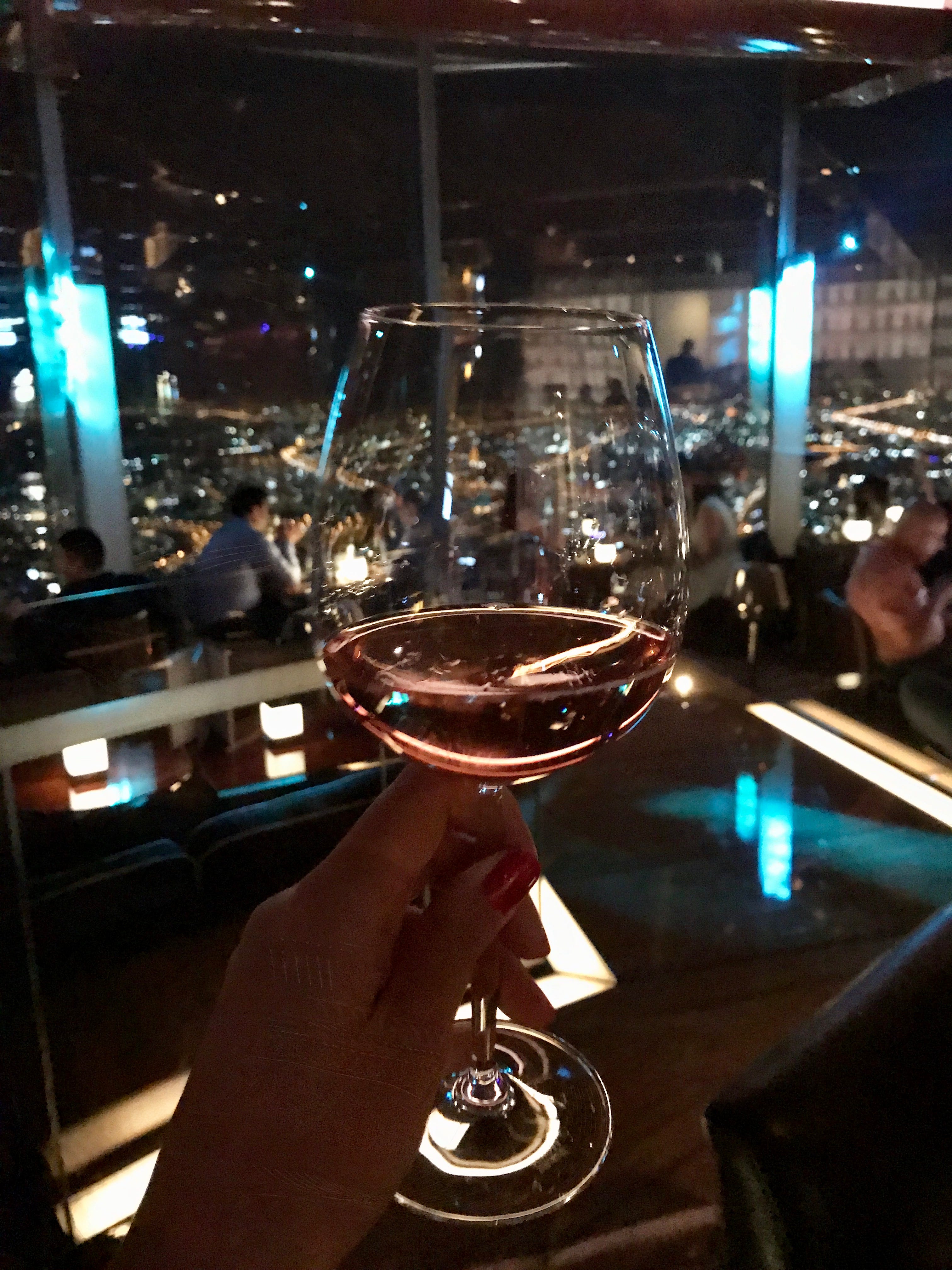 As I savoured every sip of my wine, I alternated between watching the bartenders perform theatrical champagne pours and gazing out at the view. 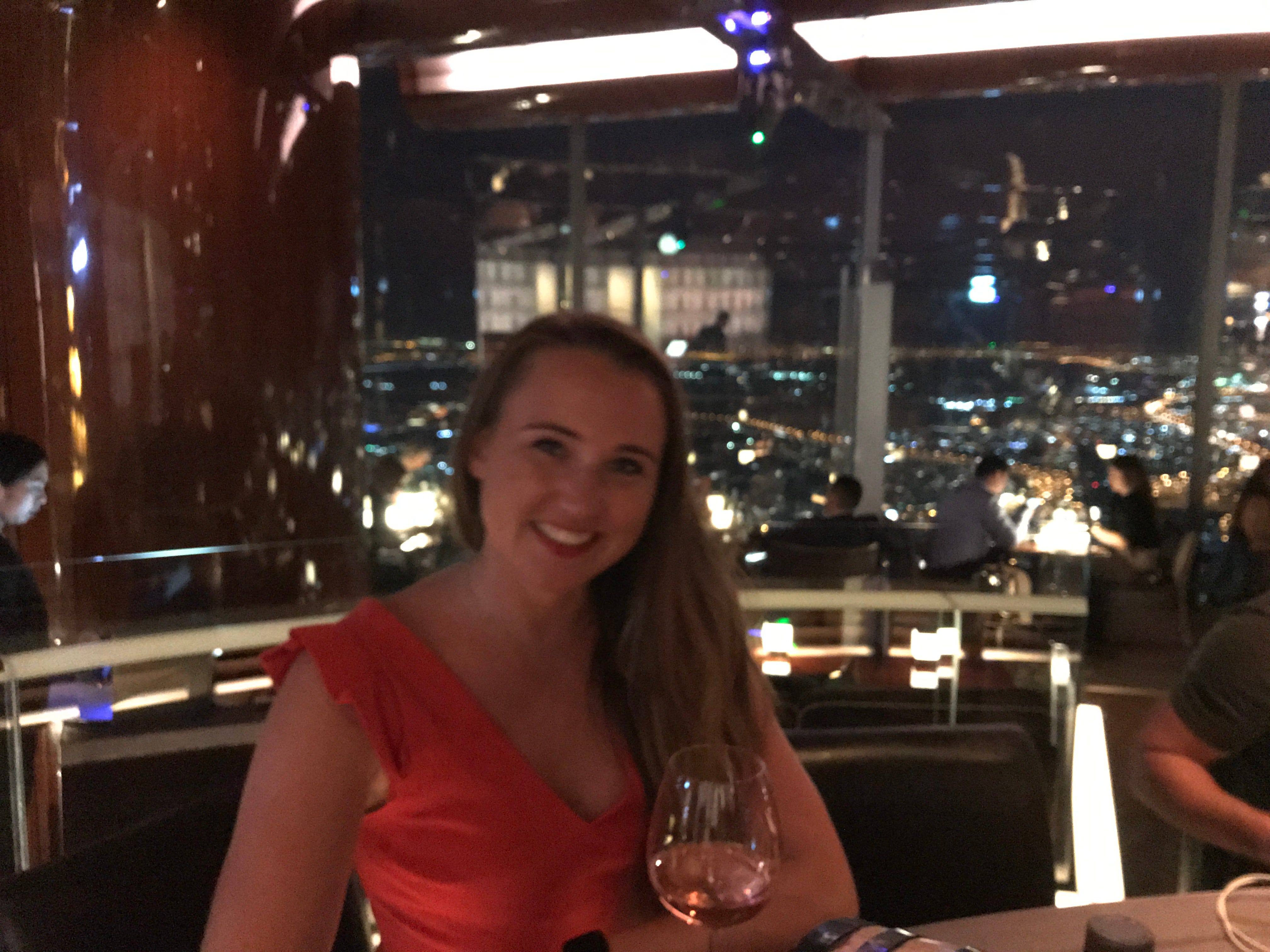 Upon closer inspection, it really was very special. 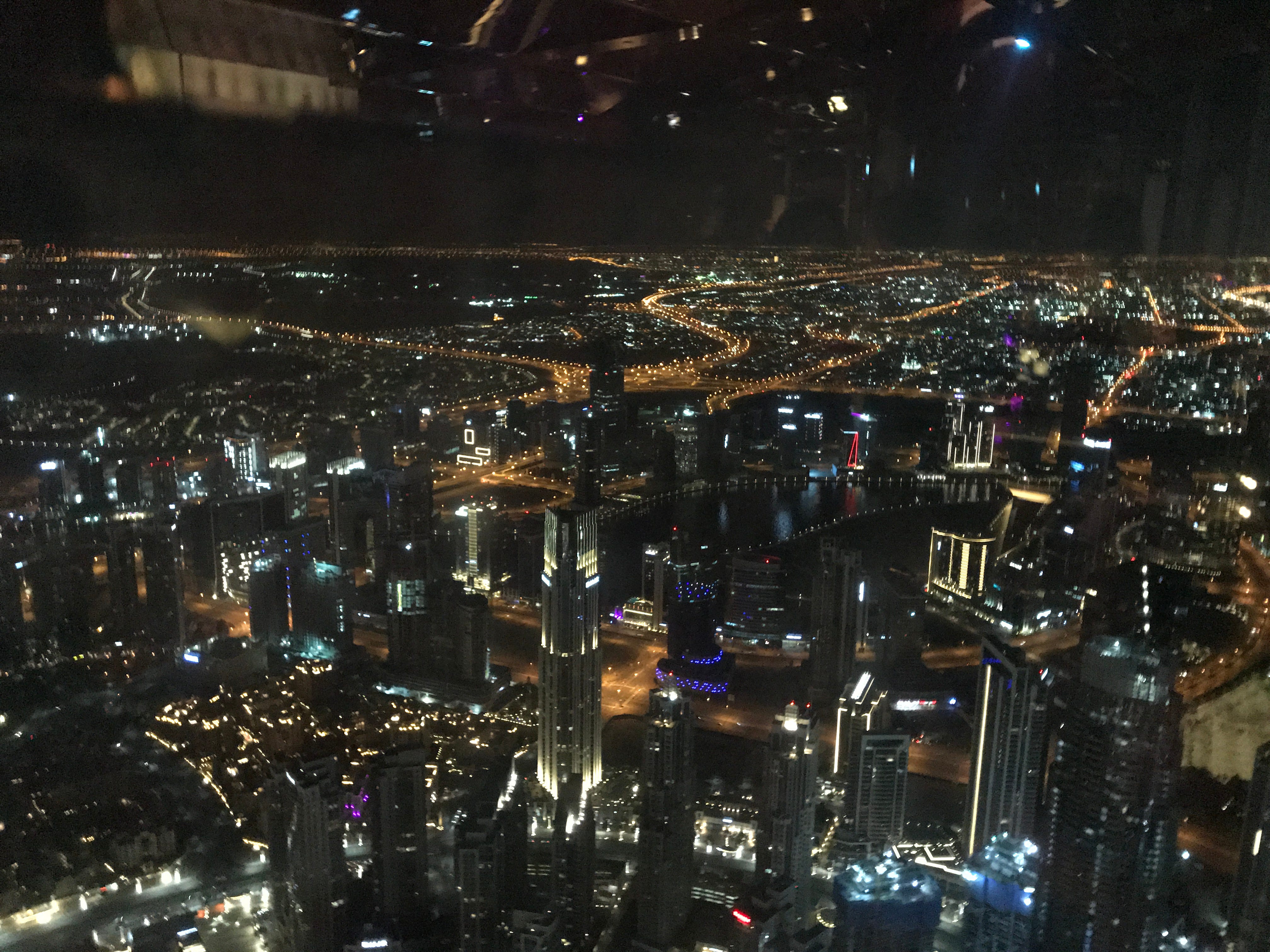 All the window tables were unsurprisingly occupied when I arrived, but some friends soon came to join me, and as the evening went on, the bar quietened down and we were able to get a better look. The atmosphere, if you will, was still very fun. 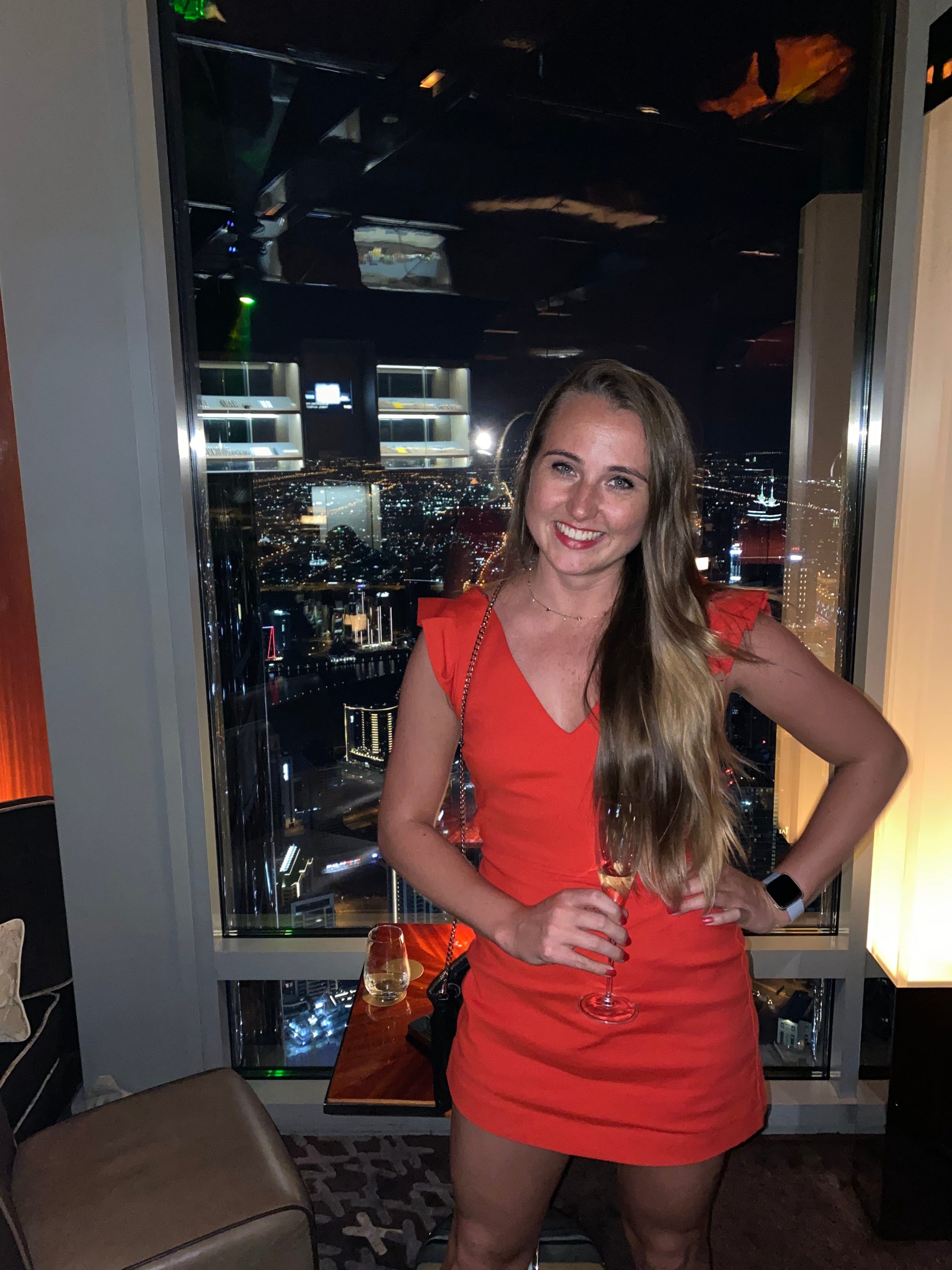 Yes, the prices are extortionate. But when you consider Atmosphere is just one floor below the official observation deck,At The Top, for which prices start at 149 AED ($US40) and you have to queue with tons of other people, it suddenly seems much better value.

The view is really very special, although to be honest, it didn’t strike me as that much more amazing than other bars I’ve been to at the top of different skyscrapers, albeit less high ones.

Atmosphere is not easy to find on foot, and there are minimum spend restrictions at various different times which make it challenging if you’re on a budget, but it was totally worth the effort as far as I’m concerned.

What’s more, I don’t think you need to bother with the restaurant’s $US220 minimum spend when you can just have a drink in the lounge – a man in one of the many elevators I took even told me he didn’t think the food was anything special, but agreed the bar was worth a visit.

The restaurant may have been a different vibe altogether, but I was surprised by how relaxed, chilled, and fun the lounge was – there really was a great atmosphere.

I paid $US70 to access Qantas’ lavish lounge at Heathrow airport, and loved it so much that staff had to kick me out

I went inside the most luxurious hotel suite in Dubai, and it was the most extra place I’ve ever seen