That’s because the tectonic plates undergirding the Americas are separating from those beneath Europe and Africa. But precisely how and why that is happening has been a mystery to scientists, since the geological forces that typically push plates apart aren’t prevalent in the Atlantic.

A study released Wednesday finally answers that question. The research, published in the journal Nature, suggests the key to the Atlantic’s expansion lies beneath a large underwater mountain range in the middle of the ocean.

The Atlantic seafloor is spreading

Imagine the Earth as a chocolate truffle â€” a viscous centre ensconced in a hardened shell.

The centre consists of a 1,800-mile-thick, semi-solid mantle that encircles a super-hot core. The top layer of the truffle â€” only about 21 miles thick â€” is the Earth’s crust, which is fragmented into tectonic plates that fit together like a puzzle. These plates surf atop the mantle, moving around as hotter, less dense material from deep within the Earth rises toward to the crust, and colder, denser material sinks towards the core. This process, known as convection, typically happens when two plates collide and one subducts, or sinks, under another.

Generally, any upward oozing of material under tectonic boundaries like the Mid-Atlantic Ridge usually starts from a part of the mantle very close to the Earth’s surface, about 2 miles below the crust. Material from the lower mantle, the part closest to the core, isn’t generally found bursting crustward there.

But the new study found that the Mid-Atlantic Ridge is a convection hotspot.

The researchers measured geologic activity across a 621-mile span. They dropped 39 seismometers under the waves in 2016, then left them for a year to collect data from earthquakes around the world. Seismic waves reverberating through material in Earth’s core offered the scientists a peek into was happening in the mantle under the Mid-Atlantic Ridge.

The group found that magma and rock from 410 miles under the crust can push its way to the surface there. That upwelling of material is what is spreading the tectonic plates â€” and the continents on top â€” apart at a rate of 1.5 inches (4 centimeters) per year.

“Upwelling from the lower to the upper mantle and all the way up to the surface is typically associated with localised places on Earth, such as Iceland, Hawaii and Yellowstone, and not with mid-ocean ridges,” Matthew Aguis, a seismologist at Roma Tre University and a co-author of the new study, told Insider. “This is what makes this result exciting because it was completely unexpected.”

Often, material trying to make its way from the lower to upper mantle is hindered by a band of dense rock known as the mantle transition zone, between 255 miles and 410 miles under our feet.

But Agius and his colleagues estimated that beneath the Mid-Atlantic Ridge, temperatures in the deepest part of that transition zone were higher than expected, making the zone thinner in the area. That’s why material can rise to the ocean floor more easily there than in other parts of the Earth.

Researchers knew that oceans expand and contract at different rates. They also knew plates move apart most markedly at subduction zones, which typically occur at active continental margins â€” where the boundary between a continent and the ocean is also a tectonic plate boundary. That’s why the Pacific Ocean expands faster than the Atlantic: Most of the Pacific sits atop one tectonic plate, and its boundaries line up almost perfectly with the continental ones on the east and west sides, the North American and Eurasian plates. Subduction at these boundaries causes the earthquakes and volcanic eruptions that characterise the region’s aptly named “Ring of Fire.”

The Atlantic Ocean, however, sits atop four major plates with boundaries that don’t match continental borders â€” the boundaries occur in the middle of the ocean. So scientists were flummoxed as to how its seafloor was expanding.

But the new research suggests the upwelling of material from deep within the mantle could be the engine of that Atlantic expansion.

Catherine Rychert, a geophysicist from the University of Southampton and a co-author of the new study, said this process started 200 million years ago. But someday, the rate of expansion could speed up.

“Most probably the rate will remain the same during our lifetime. However, it is likely the rate will change over millions of years because it has varied in the past,” Rychert told Insider. 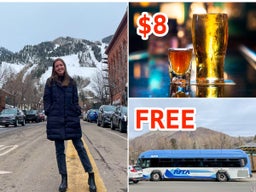 8 ways I saved money while visiting Aspen, Colorado, one of...

The 7 most cringeworthy moments in ‘Too Hot To Handle’ season...

Having a side hustle can lead to burnout — but setting...

5 American foods I loved when living in the US for...