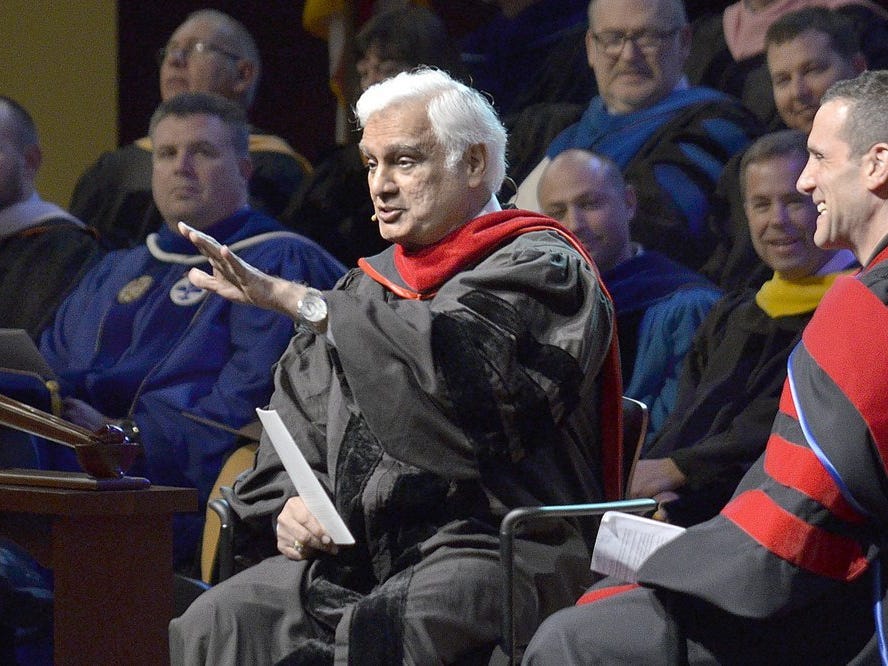 Famed evangelist, Ravi Zacharias is accused of raping a massage therapist and sexually assaulting at least five others, according to a new report carried out by a law firm hired by his ministry.

Zacharias, who died in May 2020 of cancer at the age of 74, led Ravi Zacharias International Ministries (RZIM), which he founded in 1974 and is based in Atlanta with operations in 20 different countries.

The best-selling author set up RZIM to answer difficult questions about Christianity and the ministry employed travelling speakers.

His memorial service included an address by Vice President Mike Pence, was attended by NFL’s Tim Tebow and rapper Lecrae and watched by over a million people, The Washington Post reported.

Although RZIM initially challenged the claims against Zacharias, they hired Atlanta-based law firm, Miller & Martin in October to investigate the allegations, according to the Associated Press.

The women who worked as massage therapists at two day spas he co-owned in a mall in an Atlanta suburb reported that Zacharias touched them inappropriately, exposed himself, and masturbated during regular treatments over a period of about five years.


Read More:
The ‘Godfather of Atlanta tech’ is helping founders eschew Silicon Valley by raising the largest fund in the Southeast

One woman who alleged rape told the investigators that “after he arranged for the ministry to provide her with financial support, he required sex from her.”

The report also revealed that Zacharias’ mobile devices had more than 200 photographs of younger women, including nude images of a salon employee in Malaysia on it. Two other women added that he had asked them for nude photographs.

AP noted that among the photos were of former follower, Lori Anne Thompson, who accused Zacharias of grooming her into engaging in sexually explicit online conversations and sending indecent images of herself, something he aggressively denied.

In 2017, Thompson and her husband demanded $US5 million from Zacharis in exchange for not releasing the claims against him. He sued them for extortion. The lawsuit was dropped and the parties reached a private settlement, AP added.

The report also noted that in the same year, Zacharias had said: “I have never engaged in any inappropriate behaviour of any kind.”

While RZIM previously stated: “do not in any way comport with the man we knew for decades â€” we believe them to be false,” they have since released a new, lengthy statement indicating otherwise.

It said: “We are shocked and grieved by Ravi’s actions. As Ravi Zacharias was the founder of our ministry and the leader of our staff, community, and team, we also feel a deep need for corporate repentance.”

The ministry which is now led by Zacharias’s daughter, Sarah Davis, has a hired Rachael Denhollander, a lawyer who was the first to publicly come forward against former sports physician Larry Nassar and has talked about her experience of sexual abuse at her church.