Astronomers spotted a galaxy dying after a major collision. It's bleeding out 10,000 suns' worth of gas each year. 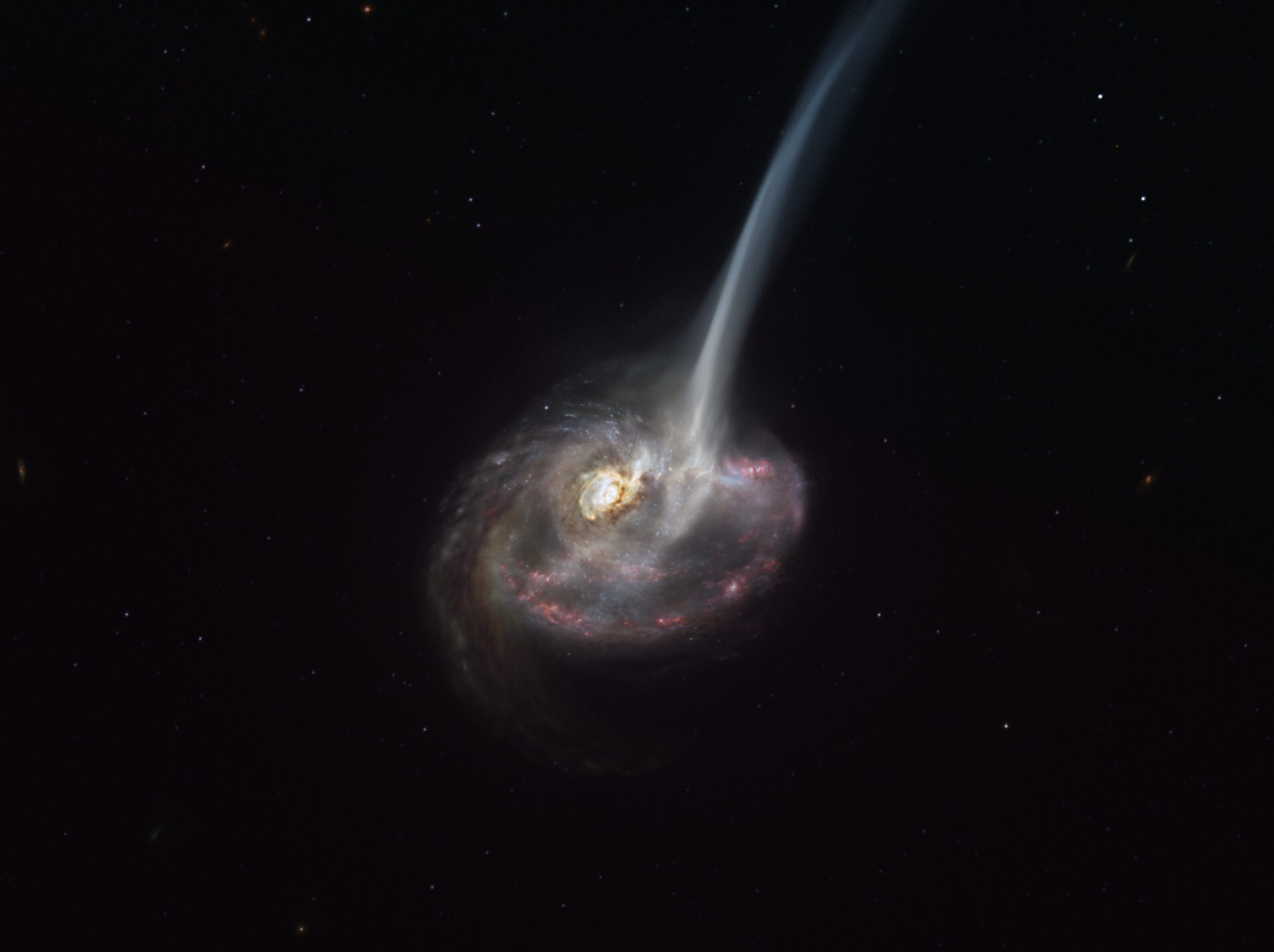 ESO/M. KornmesserAn artist’s impression shows galaxy ID2299 losing a tail of gas after being formed in a galactic collision.

For the first time, astronomers can clearly see a galaxy beginning to die.

Nine billion light-years away, galaxy ID2299 is losing critical cold gas that helps create new stars. Every year, it’s bleeding out enough gas to make 10,000 suns. Already, it has lost nearly half of its cold gas. The rest is being used up to form new stars, at a pace hundreds of times faster than in the Milky Way.

At this rate, the galaxy will soon run out of spare gas and be unable to make new stars. For a galaxy, that’s death.

The team of researchers that discovered ID2299 and its impending demise published their findings on Monday in the journal Nature Astronomy.

They think ID2299 formed after two galaxies crashed together and merged, creating a new galaxy. This resulting galaxy has a telltale “tidal tail,” from which streams of stars and interstellar material are trailing out into space.

Tidal tails often form when galaxies’ outer layers get stripped away as they merge. Such tails in distant galaxies are usually too dim for astronomers on Earth to see, though they have been detected on hundreds of galaxies. The researchers spotted this one just as it started to extend into space. That’s where all the gas is escaping.

The finding suggests that major collisions can leave galaxies leaking vital gases into space, a process that eventually starves them and halts star formation, thereby killing them.

“This is the first time we have observed a typical massive star-forming galaxy in the distant universe about to ‘die’ because of a massive cold-gas ejection,” Annagrazia Puglisi, the study’s lead author and a researcher at Durham University in England, said in a press release.

More than one way to ‘die’

As stars form, they produce winds. Scientists think there’s a black hole at the centre of every massive galaxy, which also produces wind as it devours material that falls into its gravitational pull. Astronomers think that these winds from stars and black holes carry star-forming material into distant space, eventually causing galaxies to die.

But the discovery of ID2299’s gas-leaking tail reveals a new path to galactic death.

“Our study suggests that gas ejections can be produced by mergers, and that winds and tidal tails can appear very similar,” Emanuele Daddi, a co-author of the study and an astrophysicist at the Saclay Nuclear Research Centre in France, said in the release. “This might lead us to revise our understanding of how galaxies ‘die.'”

The finding could also offer hints about where our own galaxy is headed. The Milky Way is shooting puffs of its own cold gas into the void, and it’s also on track to collide with the Andromeda Galaxy in about 4 billion years.

“Witnessing such a massive disruption event adds an important piece to the complex puzzle of galaxy evolution,” Chiara Circosta, a co-author of the study and researcher at the University College London, said in the release.

The researchers stumbled upon this doomed galaxy while studying cold gas in 100 faraway galaxies, using the Atacama Large Millimetre/submillimeter Array (ALMA) in the Chilean desert.

“I was eager to learn more about this weird object because I was convinced that there was some important lesson to be learned about how distant galaxies evolve,” Puglisi said.