I'm a UK doctor who cared for COVID-19 patients while pregnant. Receiving the AstraZeneca vaccine felt like a beacon of hope. 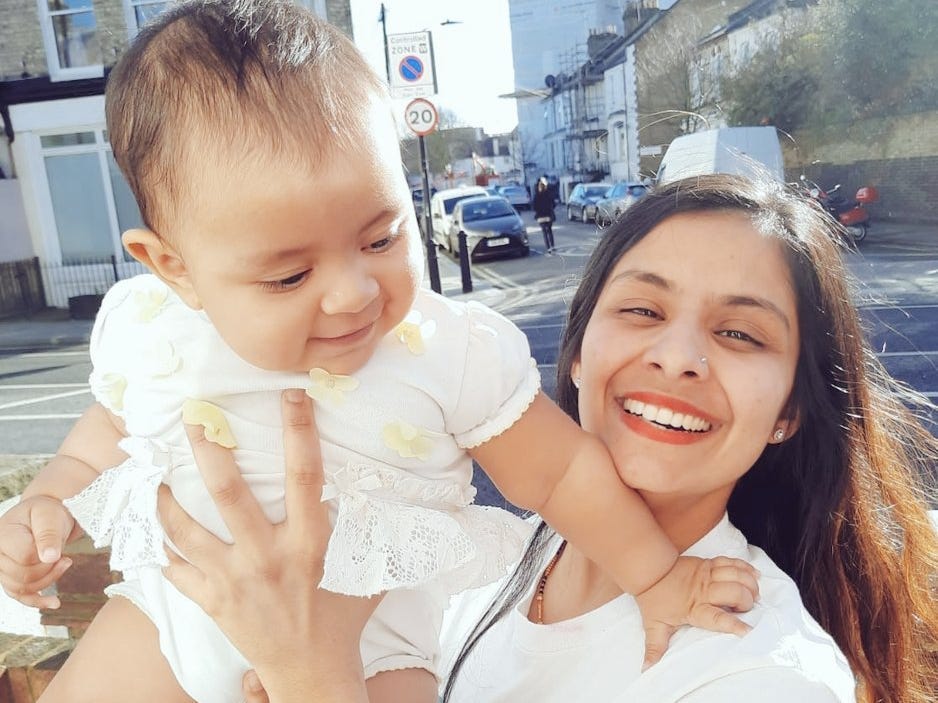 When I was a mum-to-be in my third trimester, I just wanted to enjoy my pregnancy. It’s a time when I should have been setting up the nursery and shopping for baby clothes. Instead, in April 2020, I found myself protesting outside of our prime minister’s home at Downing Street with a sign demanding more PPE for healthcare workers. I’d been working while pregnant on wards with COVID-19 patients, and my colleagues and I weren’t protected as we didn’t have the right PPE.

Since then my life has been a whirlwind. I gave birth to my daughter Radhika in July 2020, took legal action against the UK government, was featured in British Vogue, and now I am working on the frontline once again in my home country of Gibraltar.

I saw my first COVID-19 positive patient on March 15, 2020. I was working on the acute ward, which is the next step after A&E, the accident and emergency department. I was terrified because we started to see healthcare workers in the UK die, and many were from ethnic minority groups like myself. The fact that I was also pregnant increased my concerns. I was told I’d only be vulnerable if I was in my third trimester, but by then I was a few weeks away from my third trimester.

In the beginning, our hospital was very well equipped

The hospital was meticulous with infection control â€” even the sleeve of your gown had to be the correct length. But in less than a few months, we’d gone from wearing a full gown and mask to wearing a dinner lady’s apron, because that’s all there was.

My husband Nishant, who’s also a doctor, and I went through the right channels by sending emails to our bosses asking for more equipment. We also took steps to protect ourselves and our unborn baby at home by living on separate floors of our house until when I gave birth in July 2020.

Vaccine inequity on Capitol Hill: Members of Congress got their shots but essential Hill workers are still left waiting

Being pregnant while working during the pandemic was terrifying 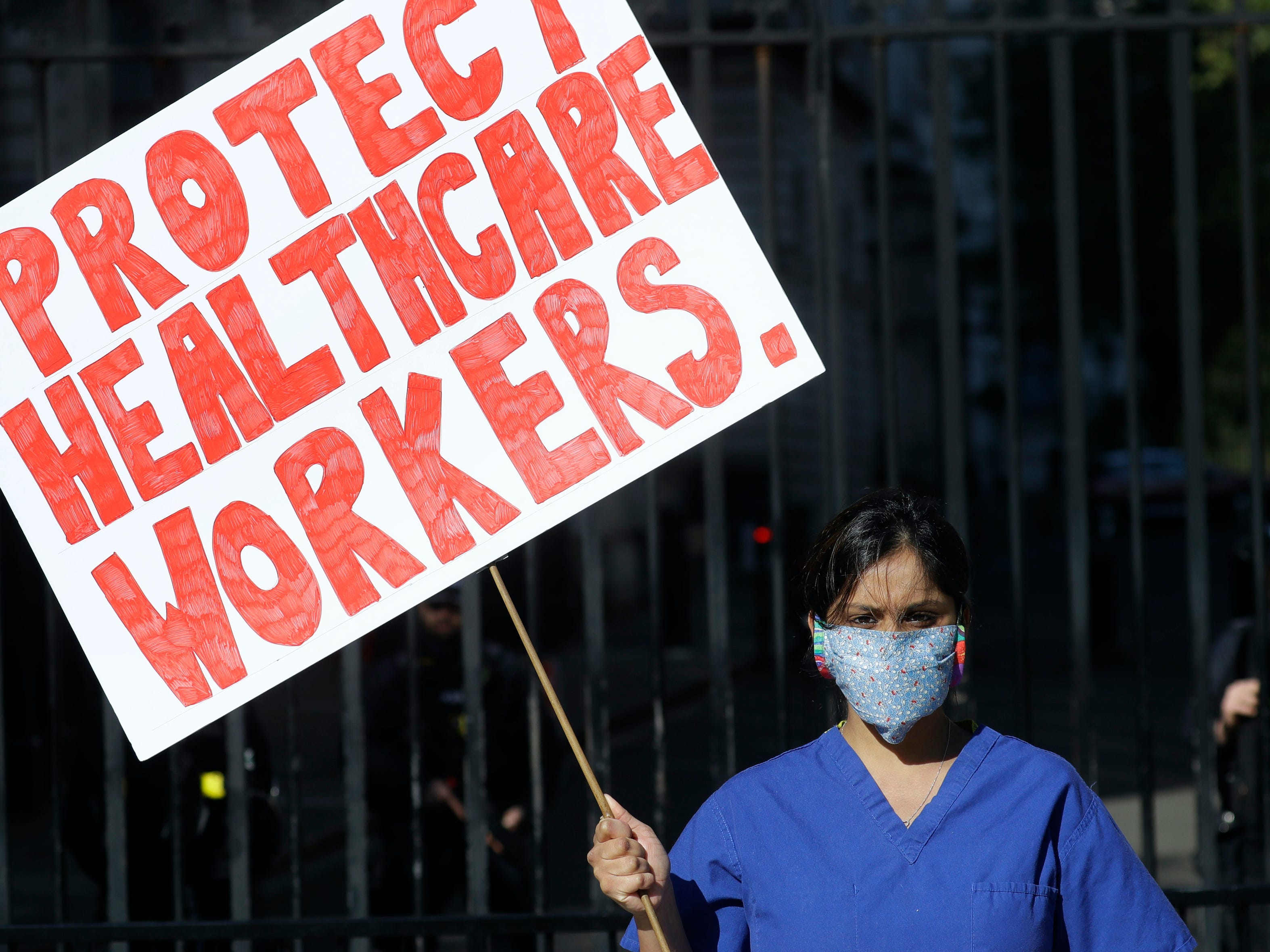 Kirsty Wigglesworth/AP PhotoViz protesting outside the prime minister’s house in London on April 19, 2020.

At the time, my husband was working in A&E at Luton & Dunstable University Hospital, and we were terrified we would pass something onto each other. I’d also been diagnosed with gestational diabetes, which meant I had to have more scans, but due to COVID-19 restrictions my husband couldn’t come with me. It was a very miserable time. I felt completely alone.

The final trigger for me was when Mary Agyeiwaa Agyaponga, a pregnant nurse at my husband’s hospital, died. Nishant and I had a lot of sleepless nights. I cried a lot. It felt that the world was a very unfair place and no one seemed to understand what we healthcare workers were going through. I thought of Mary’s daughter. A newborn baby left alone, who’s never going to see her mother and whose family is left to grieve. It all could have been avoided.

A week after Mary’s death, I dressed in my scrubs and stood with my homemade sign that said ‘Protect Healthcare Workers’ outside of Downing Street. My husband and I were worried about what might happen. I’d never done anything like it before. We talked about what would happen if I got arrested or lost my job. Despite these fears, I knew that I was doing the right thing.

After giving birth to my daughter in July, I kept campaigning

My husband and I launched a judicial review with the government. We asked for higher grade PPE and better risk assessments for healthcare workers who are from ethnic minority groups.

In December, the government revoked some of the guidelines, including the one that said PPE be reused and agreed to launch a specific panel to make sure everything is put in place to protect ethnic minority groups.

I was emotional while receiving the AstraZeneca vaccine 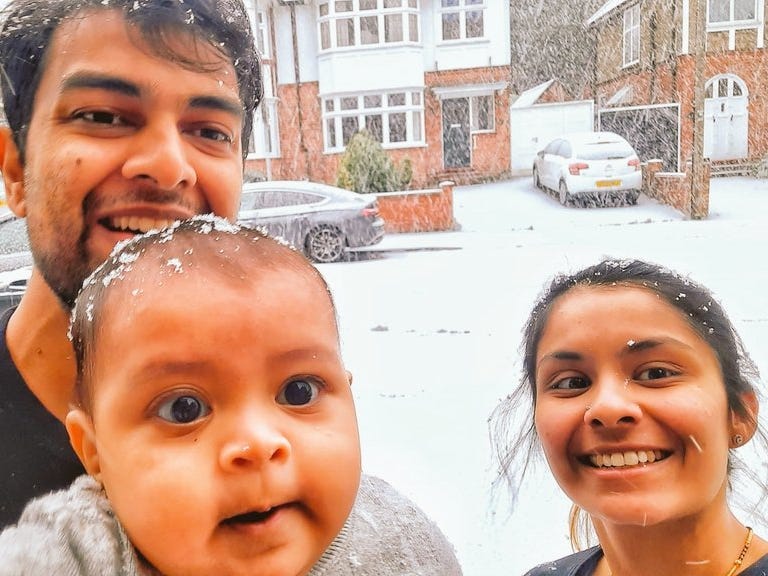 Meenal Viz.Viz enjoying the snow with her husband Nishant and daughter Radhika.

When the Prime Minister announced in January that the UK had passed 100,000 deaths, it took me back to the same feeling of dread I had in March last year, during the first wave.

Later, when I received my first dose of the AstraZeneca vaccine on January 23, it felt like I could finally see the light at the end of the tunnel. After months fighting this virus and witnessing so much loss, it was emotional to finally get the vaccine. I encourage everyone I know to get the vaccine â€” it will protect us all and help bring an end to the pandemic.

Currently, I’m working on the front line to help healthcare workers in my home country of Gibraltar, which is a British Overseas Territory, for one month. When I’m not on the wards, I’m working with the United Nations on the Team Halo project, where scientists across the globe are helping answer people’s concerns about COVID-19 vaccines.

Despite the fear that the January wave of COVID-19 cases brought, I’m confident that as more vaccines are distributed and more people receive it, we’ll all be better protected and closer to the end of the pandemic.