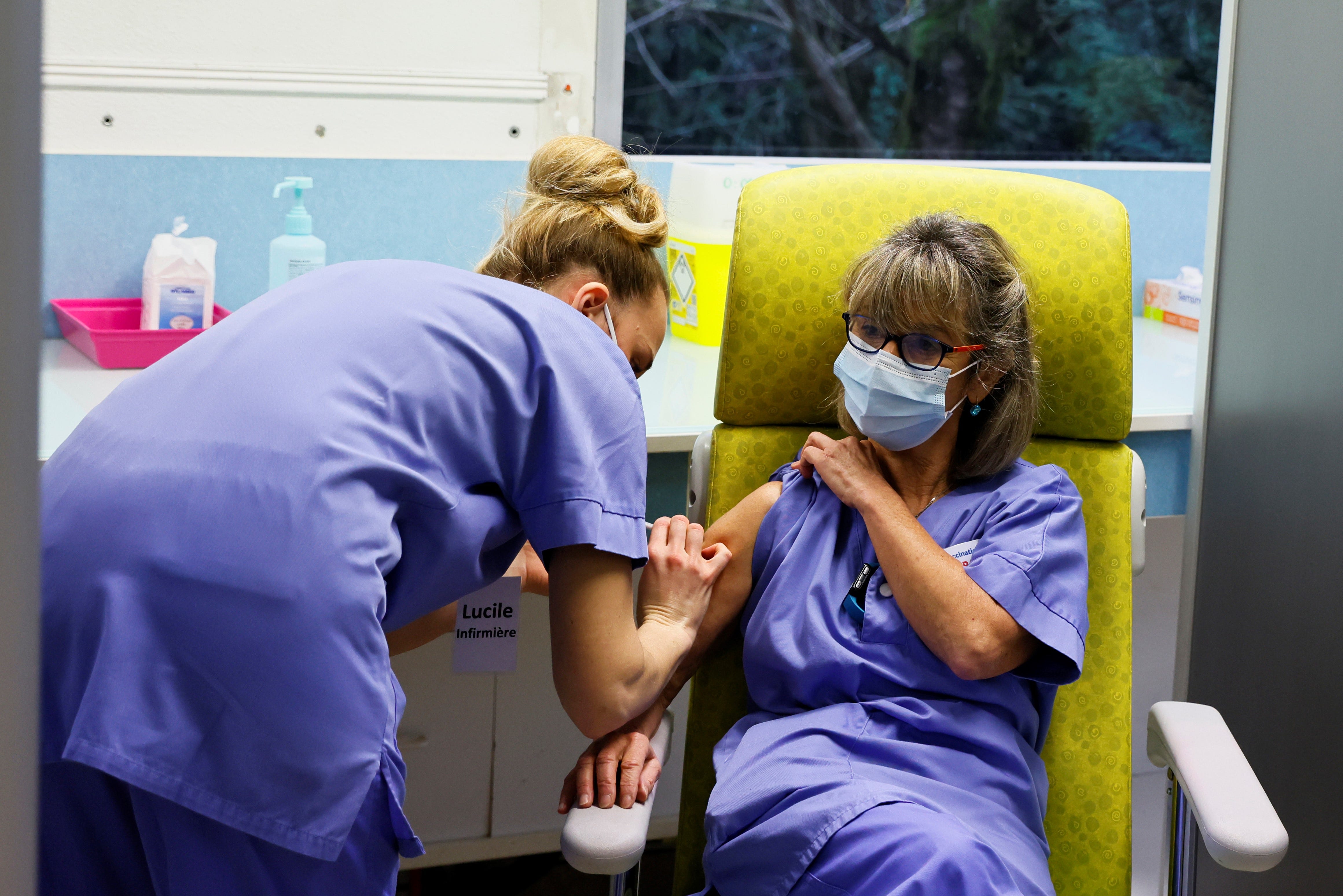 Thomas Samson/AFP/Getty ImagesA medical staffer vaccinates a colleague with the AstraZeneca vaccine at the South Ile-de-France Hospital Group in Melun, France on February 8, 2021.

How effective is AstraZeneca’s coronavirus vaccine? We still don’t have a clear, consistent answer.

Since the fall, a string of studies â€” some peer-reviewed, others not â€” have suggested the vaccine could be anywhere from 22% to 90% effective, depending on the parameters.

AstraZeneca’s own trial results, released in November, were “awfully confusing for experts and non-experts alike,” Natalie Dean, a biostatistician at the University of Florida, tweeted at the time. She gave the company “a poor grade for transparency and rigour.”

That’s because the company combined data from its Brazil and UK trial groups, even though they had different sample sizes and demographics. AstraZeneca also averaged the results of two different dosing regimens, one of which was administered by mistake.

Subsequent analyses, meanwhile, have revealed that only 12% of participants in AstraZeneca’s late-stage trial were over 55, and that the vaccine’s effectiveness varies dramatically depending on the time between the two doses. The company’s own vaccine label says shots should be administered four to 12 weeks apart.

This confusion has led to a patchwork of mismatched vaccine authorizations and guidelines around the world.

On Wednesday, a World Health Organisation panel recommended the shot for all adults. But several European nations haven’t cleared the vaccine for older age groups yet. And South Africa recently paused its rollout of the shot entirely due to concerns that it doesn’t work against the dominant variant circulating in the country. The US, meanwhile, is still waiting on its own separate trial results before deciding whether to greenlight the vaccine.

“When you see this drip, drip, drip of uncertain information coming out, that puts a question in the mind of the public that could hurt vaccine uptake,” Dr. Johan Bester, director of bioethics at the University of Nevada, Las Vegas School of Medicine, told Insider.

Incorrect dosing turned out to be more effective

Few researchers anticipated this level of confusion in the spring, when AstraZeneca seemed to be a frontrunner in the global vaccine race. In April, the company’s shot became the first to enter a human trial in Europe.

The vaccine’s technology introduces a coronavirus gene into the body using a genetically engineered common-cold virus. It was relatively easy to develop and also cheaper than the other leading vaccines, at around $US3 to $US4 per dose. Unlike Pfizer and Moderna’s vaccines, it isn’t stored at subzero temperatures, which should make it easier to distribute worldwide.

But AstraZeneca has repeatedly jumped the gun by reporting data based on small sample sizes and testing alternate vaccine doses and schedules that weren’t part of its original trial. Vipin Kumar/Hindustan Times/Getty ImagesA health worker administers the AstraZeneca vaccine to a member of the Gurugram Police in Gurugram, India on February 5, 2021.

In November, AstraZeneca reported that its shot was 62% effective at preventing COVID-19 among nearly 9,000 volunteers in Brazil and the UK. Those participants received two full doses, but about 2,700 others accidentally got a half dose followed by a full dose. Among that smaller group, the vaccine’s effectiveness rose to 90%.

AstraZeneca averaged the two results, stating that the vaccine was 70% effective.

“To people looking in from the outside, that doesn’t make a whole lot of sense,” Bester said. “We’re either going to give half doses or full doses to people and it will either be one effectiveness or the other.” 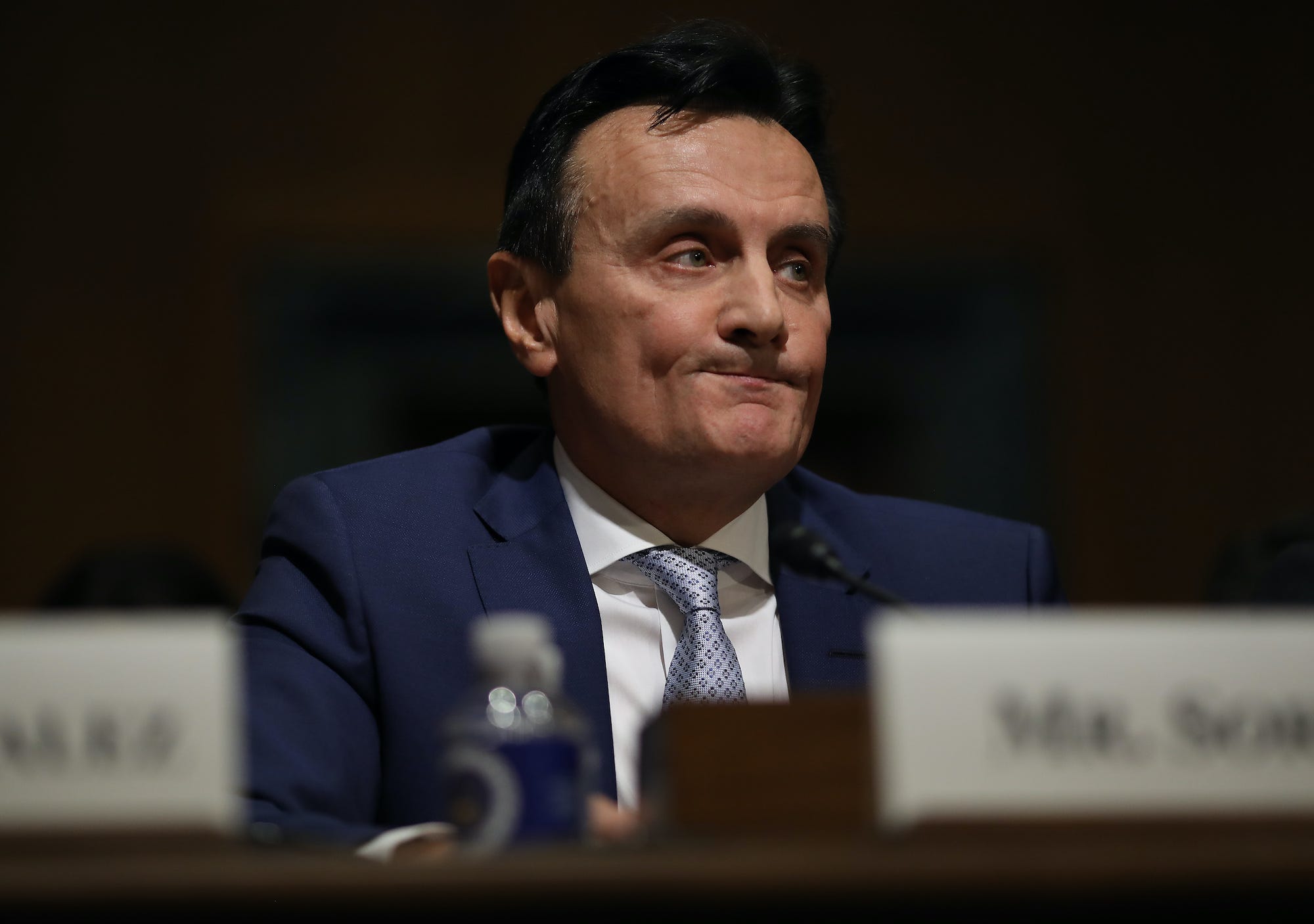 It’s still not clear why the results differed so much between the groups.

“People have rolled out a whole lot of possible explanations for why the half dose, as a start, was better,” Bester said. “One theory goes that it mimics natural infection better. You have a lesser dose, it primes your immune system, then you get a more overwhelming dose later.”

Other researchers suggested that the small sample size for the half-dose regimen might have skewed the results. A third possibility is that the half dose and full dose were given with a longer interval in between. (AstraZeneca’s press release said both groups got doses “at least one month apart.”)

Bester noted, though, that the inconsistency “doesn’t call into question whether the vaccine as a whole is effective” â€” it’s a matter of finding the best dosing.

Confusion over when to administer the second shot

Questions linger, too, about the optimal timing for the second dose.

New data from Oxford University researchers â€” who designed the shot â€” suggests it could behoove people to wait up to three months. A recent analysis in The Lancet, not yet peer reviewed, found that AstraZeneca’s vaccine was 55% effective when doses were given less than six weeks apart, but 82% effective when doses were given at least 12 weeks apart. The results were based on trials in Brazil, South Africa, and the UK with more than 17,000 volunteers in total.

The analysis also examined the effectiveness of just one AstraZeneca dose, before people received their second shot. Surprisingly, a single dose was shown to be 76% effective â€” though the finding came with caveats. For one, the researchers measured effectiveness up to 90 days after people had gotten the one dose. That’s a longer time frame than in other analyses, which examined the vaccine’s effectiveness after about two weeks.

In other words, not a perfectly randomised or representative group. 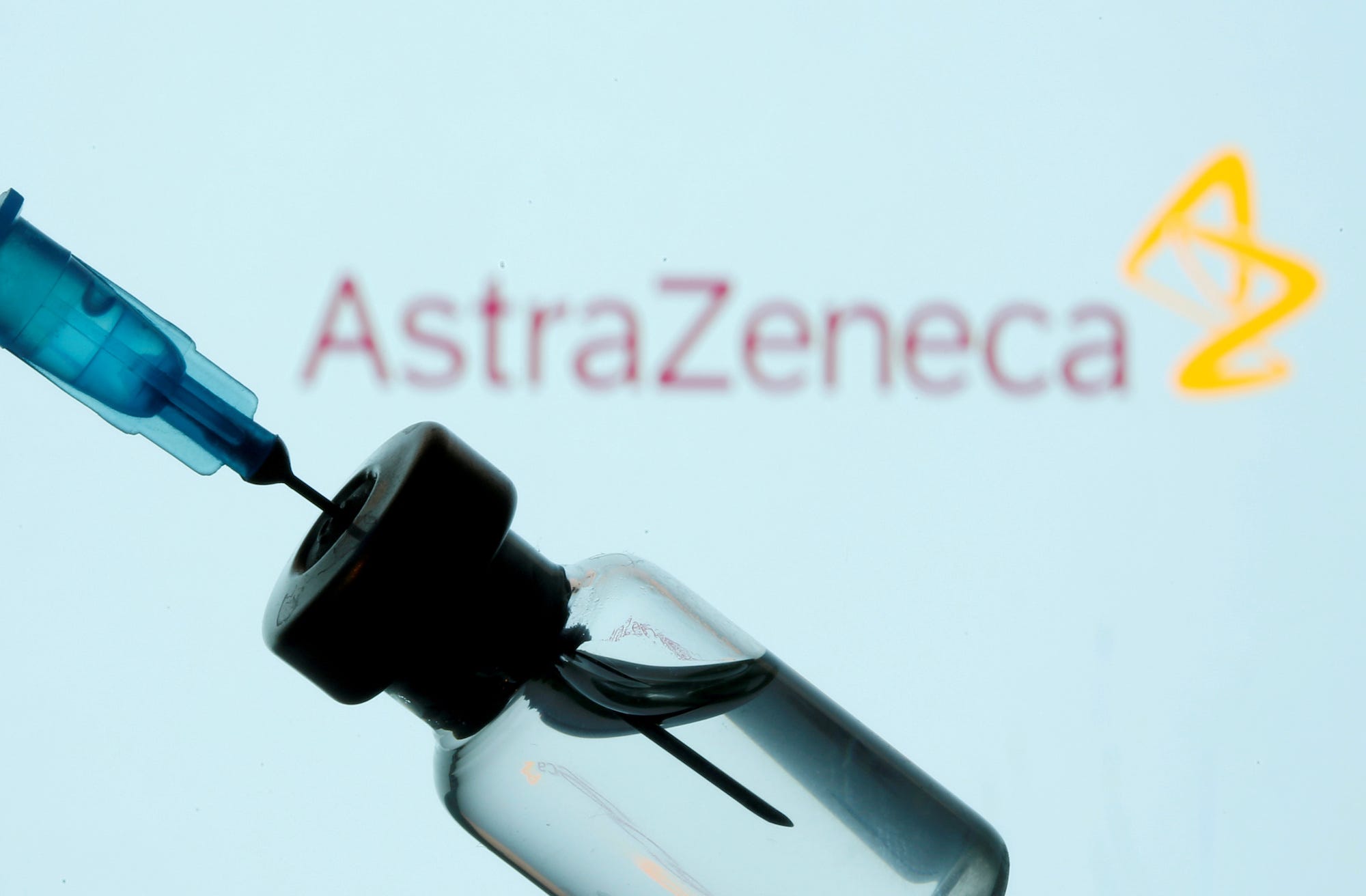 Reuters/Dado RuvicA vial and syringe in front of an AstraZeneca logo, January 11, 2021.

“Overall we need to be a little cautious here,” Paul Hunter, a professor of medicine at the University of East Anglia, wrote in The Conversation. “Testing the vaccine’s efficacy after delaying the second dose for different amounts of time wasn’t an original aim of the trial.”

Does the vaccine reduce transmission?

Yet another striking finding in the Lancet preprint was that a single dose of AstraZeneca’s vaccine reduced the number of positive COVID-19 tests by 67%. This finding was based on weekly swabs from volunteers in the UK trial.

AstraZeneca said in a press release that this indicates “the potential for the vaccine to reduce asymptomatic transmission of the virus.” But many experts said that suggestion was premature.

“Seeing a reduction in the number of people carrying the virus as a result of being vaccinated doesn’t definitively prove that it will reduce transmission,” Hunter wrote. “This is still quite a big inference to make.”

In fact, the analysis did not find evidence that the vaccine protected people from developing asymptomatic cases.

The European Union authorised AstraZeneca’s full two-dose regimen for all adults at the end of January, following in the footsteps of Argentina, India, Mexico and the UK. But many nations â€” including France, Germany, Spain, and Sweden â€” have restricted the vaccines to people younger than 65. Italy and Belgium, meanwhile, have restricted doses to those younger than 55.

That’s because relatively few participants over 55 were included in AstraZeneca’s trial data. In a December study, Oxford researchers said older participants were “recruited later” than other age groups and said additional data about 55-plus volunteers may come later.

“You’re always somewhat at the mercy of who’s volunteering to be in your trial,” Bester said. 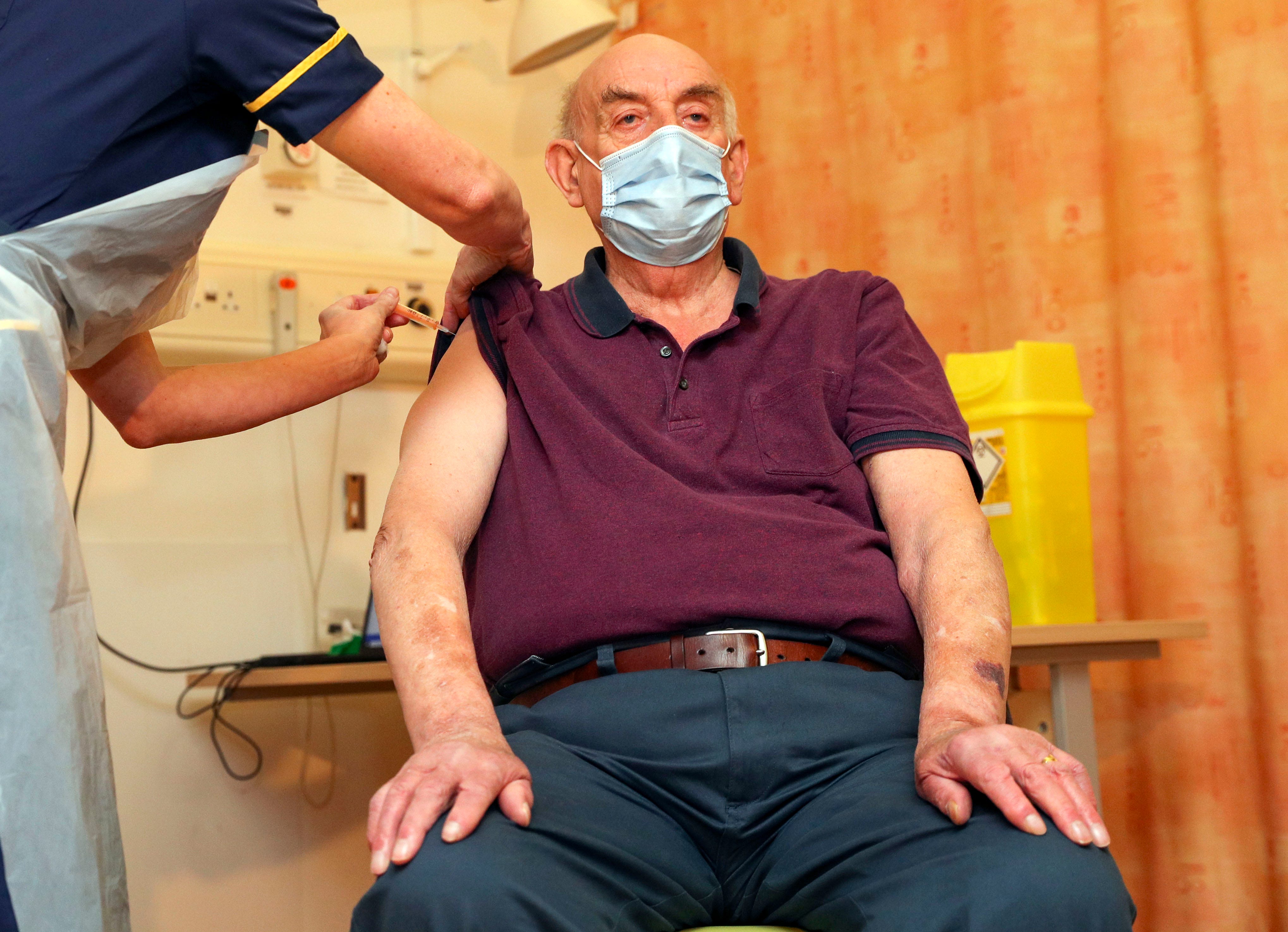 Most studies to date also don’t account for how well AstraZeneca’s vaccine protects against new coronavirus variants like B.1.351, which was identified in South Africa and now accounts for around 90% of COVID-19 cases there.

A recent study, which is still awaiting peer review, indicated that the vaccine was just 22% effective against mild and moderate illness caused by B.1.351. That’s why South Africa temporarily halted its distribution of AstraZeneca’s vaccine.

Still, that study was small, with roughly 2,000 participants. The research also didn’t assess whether the vaccine prevented severe disease, hospitalisation, or death among those infected with the variant.

In a statement to NPR, AstraZeneca said it expects the vaccine to protect against severe disease caused by the variant.

The US trial could address lingering questions

AstraZeneca began its late-stage vaccine trial in the US in September, several months after comparable trials started in Brazil, South Africa, and the UK. The company’s research chief, Mene Pangalos, estimated last week that the US trial could produce results within four to six weeks.

Some researchers hope the data will clear up confusion.

“The US study is the one that’s going to be the definitive study to tell us how this vaccine works against severe, hospitalized COVID and symptomatic COVID,” Anna Durbin, a vaccine researcher at Johns Hopkins Bloomberg School of Public Health, told STAT.

Bester said he anticipates AstraZeneca’s vaccine to be at least moderately effective.

“My big worry about this is not whether the vaccine is effective or not effective, but the appearance that something isn’t right to the general public,” he said. “For vaccine uptake, trust is important.”