'Nothing can stop us': Slain Trump supporter tweeted conspiracy theories and her devotion to Trump in days before her death 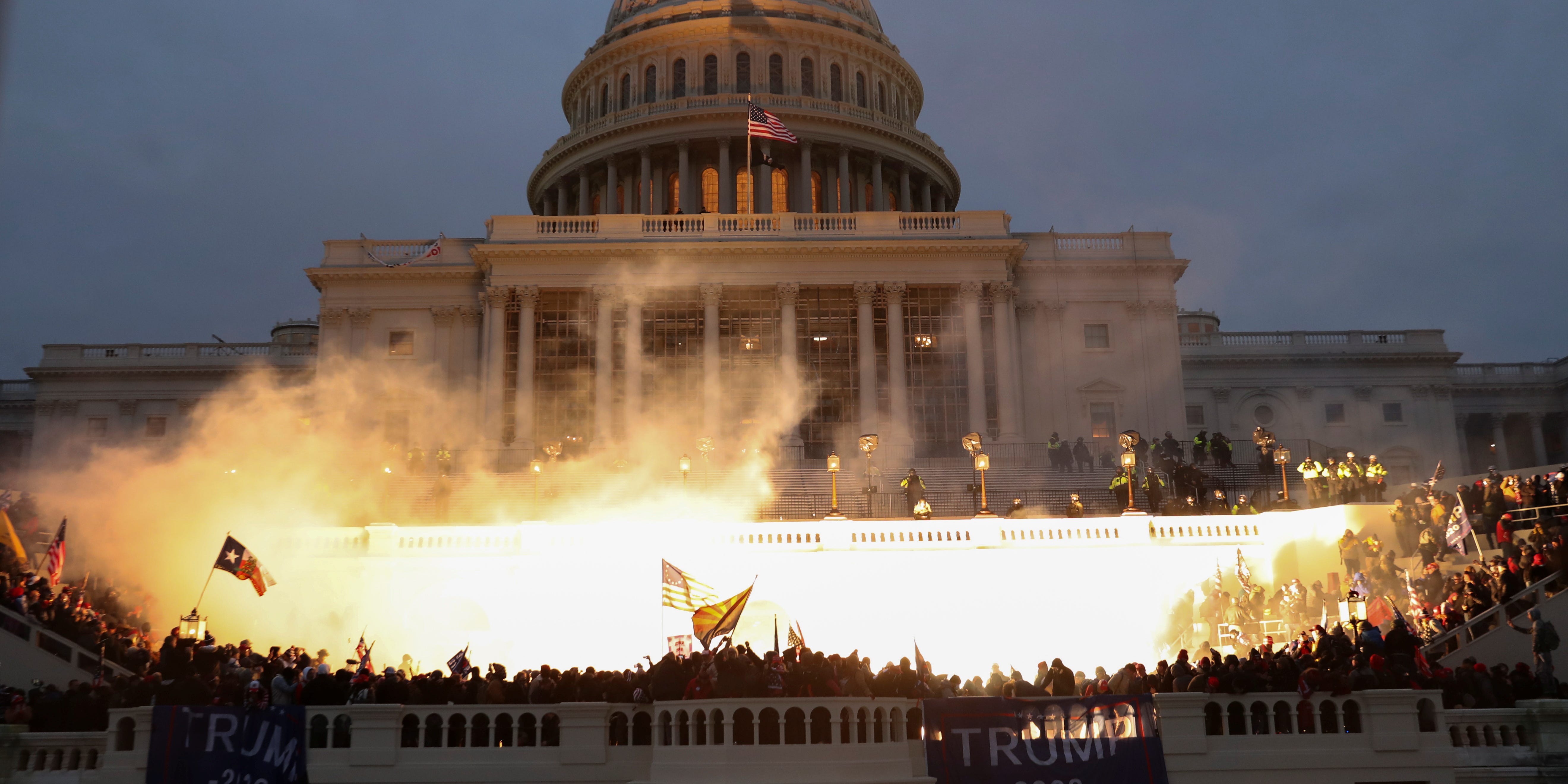 REUTERS/Leah MillisAn explosion caused by a police munition seen while supporters of President Donald Trump gathered in front of the US Capitol on Wednesday.

Ashli Babbitt’s Twitter account said she loved “my dude, my dog, & above all, my country.” On Wednesday, Babbitt, a 14-year veteran of the Air Force who ardently supported President Donald Trump and also dabbled in conspiracy theories over social media, died during a rampage at the US Capitol.

Babbitt was one of hundreds of Trump supporters who, at the president’s suggestion earlier Wednesday, descended on the Capitol to protest the confirmation of President-elect Joe Biden’s victory against Trump. Photos and videos of Babbitt inside the Capitol before, during, and after she was shot were shared across social media, and after her death her husband told local media in San Diego â€” where she was believed to reside â€” that Babbitt was an ardent Trump supporter.

Babbitt’s social-media posts leading up to her death give a clearer idea of her decision to head to Washington.

Babbitt regularly expressed support for Trump on social media. While she didn’t tweet much herself, she was an ardent retweeter of conservative and right-wing figures, including Michael Flynn and Jack Posobiec, and conservative news sites like Right Side Broadcasting.

On January 5, Babbitt responded to a tweet that said: “A lot of flights into DC are being cancelled with no bad weather. The entire world is corrupt.”

“Nothing will stop us,” she responded. “They can try and try and try but the storm is here and it is descending upon DC in less than 24 hoursâ€¦.dark to light!”

She also regularly endorsed QAnon conspiracy theories on Twitter. In a series of photos posted in early September, Babbitt attended a pro-Trump boat parade in San Diego, sporting a QAnon T-shirt and including the group’s “Where we go one, we go all” slogan in the caption.

In December, Babbitt posted a screenshot of a notification of a California stay-at-home order and tweeted, “This is that commie bullshit!”

In a follow-up tweet, Babbitt shared a photo of Gov. Gavin Newsom’s face with a stop sign pasted over it, and later retweeted posts calling for Newsom to be recalled.

Less than 24 hours before the violent rally, Babbitt retweeted a tweet from Wood that said: “MUST BE DONE LIST before Congress meets today: 1. Mike Pence @vp@Mike_Pence must resign & thereafter be charged with TREASON. 2. Rod Rosenstein @RodRosenstein must be arrested & charged with being accessory to murder & TREASON. 3. Chief Justice John Roberts must RESIGN.”

A series of videos posted by Babbitt to Twitter in 2018 showed her expressing anger over Democratic politicians and ranting about immigration at San Diego’s southern border.

In the videos, she called out the California lawmakers Rep. Maxine Waters, Sen. Kamala Harris, Rep. Ted Lieu, then-Gov. Jerry Brown, and then-Lt. Gov. Newsom, arguing that they were in favour of unrestricted immigration. Babbitt was specifically angry with Harris, who Congress was scheduled to certify as vice president-elect on Wednesday, for comparing US Immigration and Customs Enforcement’s tactics to those of the KKK.

“I’m putting all of you on notice. Every single one of you politicians in California, what the hell are you doing?” Babbitt shouted from her car in one video.

In one post, Babbitt retweeted Posobiec, who, responding to a photo of Washington-bound Trump supporters wearing Make America Great Again hats, tweeted, “So many domestic terrorists!”

In one, Babbitt liked a tweet by the right-wing commentator Graham Allen that said: “Here we go…. January 6, 2021 will be in the history books one way or the other! Buckle up America!”

In one of her last tweets on the first day of 2021, Babbitt responded to a Twitter user asking, “When do we start winning?” Babbitt quote-tweeted and responded, “Jan 6, 2021,” with an American flag and hang-five emoji.