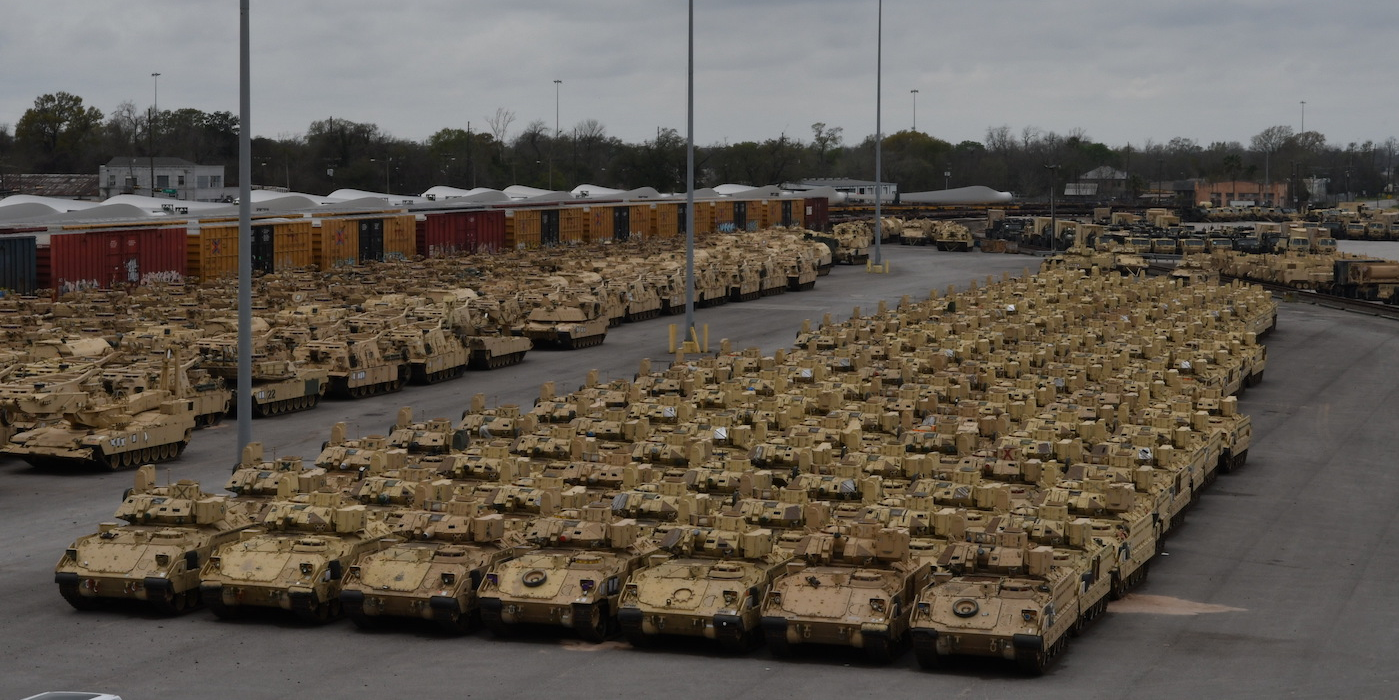 US Army/Kimberly SpinnerContainers and vehicles await transportation on commercial ships to Europe in support of Defender-Europe 20 at the Port of Beaumont, Texas, February 18, 2020.

In late January, US military personnel and contractors started loading heavy vehicles and equipment for transport from US bases to Europe to meet 20,000 soldiers travelling from the US for this spring’s Defender-Europe 20, which was supposed to be the US Army’s largest exercise there in 25 years.

Those preparations stopped on March 13, US Army Europe said this week, as European countries close borders and restrict movement amid the spread of COVID-19, the illness caused by a coronavirus that emerged last year.

The Army has said that Defender-Europe 20 would be modified in both size and scope, but it added this week that linked exercises, such as this year’s iteration of Saber Strike, won’t be conducted.

US Army Europe said Monday that it anticipated “the armoured brigade combat team already deployed to Europe will conduct gunnery and other combined training events with Allies as part of a modified Allied Spirit exercise.”

But “forces already deployed to Europe for other linked exercises will return to the United States,” the command said. 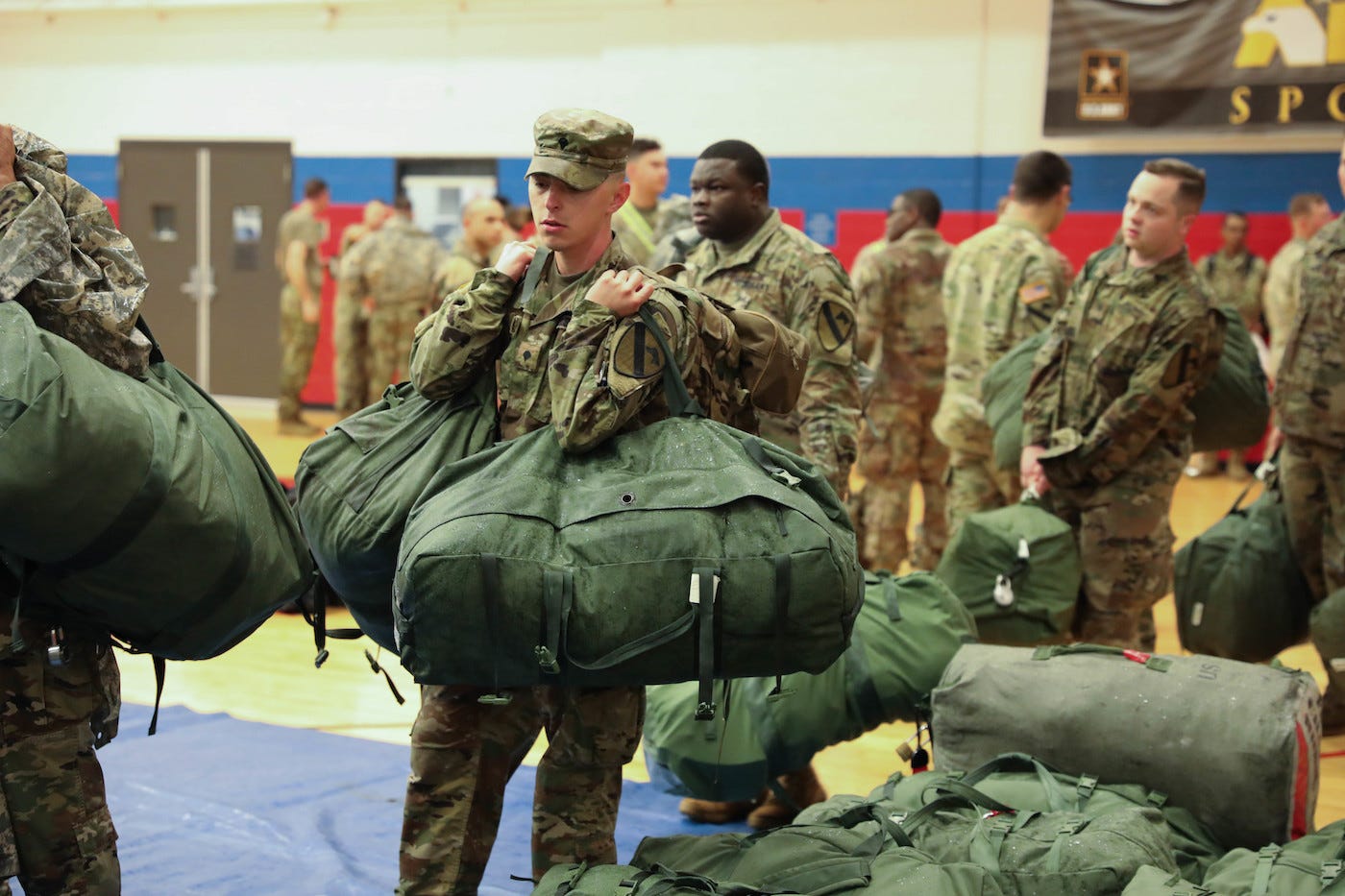 US Army/Staff Sgt. Kelsey MillerSoldiers from Headquarters and Headquarters Battalion of the US Army’s 1st Cavalry Division prepare to head to Europe for the Defender-Europe 20 exercise.

Since January, about 6,000 soldiers have deployed from the US to Europe, including a division headquarters and an armoured brigade combat team, as well as about 3,000 pieces of equipment, the release added.

Roughly 9,000 vehicles and pieces of equipment have been taken out of Army Prepositioned Stocks in Europe. The Army has also moved of soldiers and equipment from European ports to training areas in Germany and Poland.

In an email Tuesday morning, a US Army Europe spokesperson said the command is currently “evaluating which troops can be safely redeployed,” adding that responding to this type of situation was a “perfect example of how prepared and ready we are by continually assessing our operations and activities.”

The German military has said that Defender-Europe 20 will not continue in that country and that exercises planned for the Bergen and Grafenwöhr training areas would not take place.

Asked about that announcement, the spokesperson said there were “many details still being worked and discussed” with allies and partners in Europe.

“Changes are anticipated to the deployment timelines of soldiers currently in Europe, redeployment of US-based equipment, and the next Atlantic Resolve rotation,” the spokesperson said. 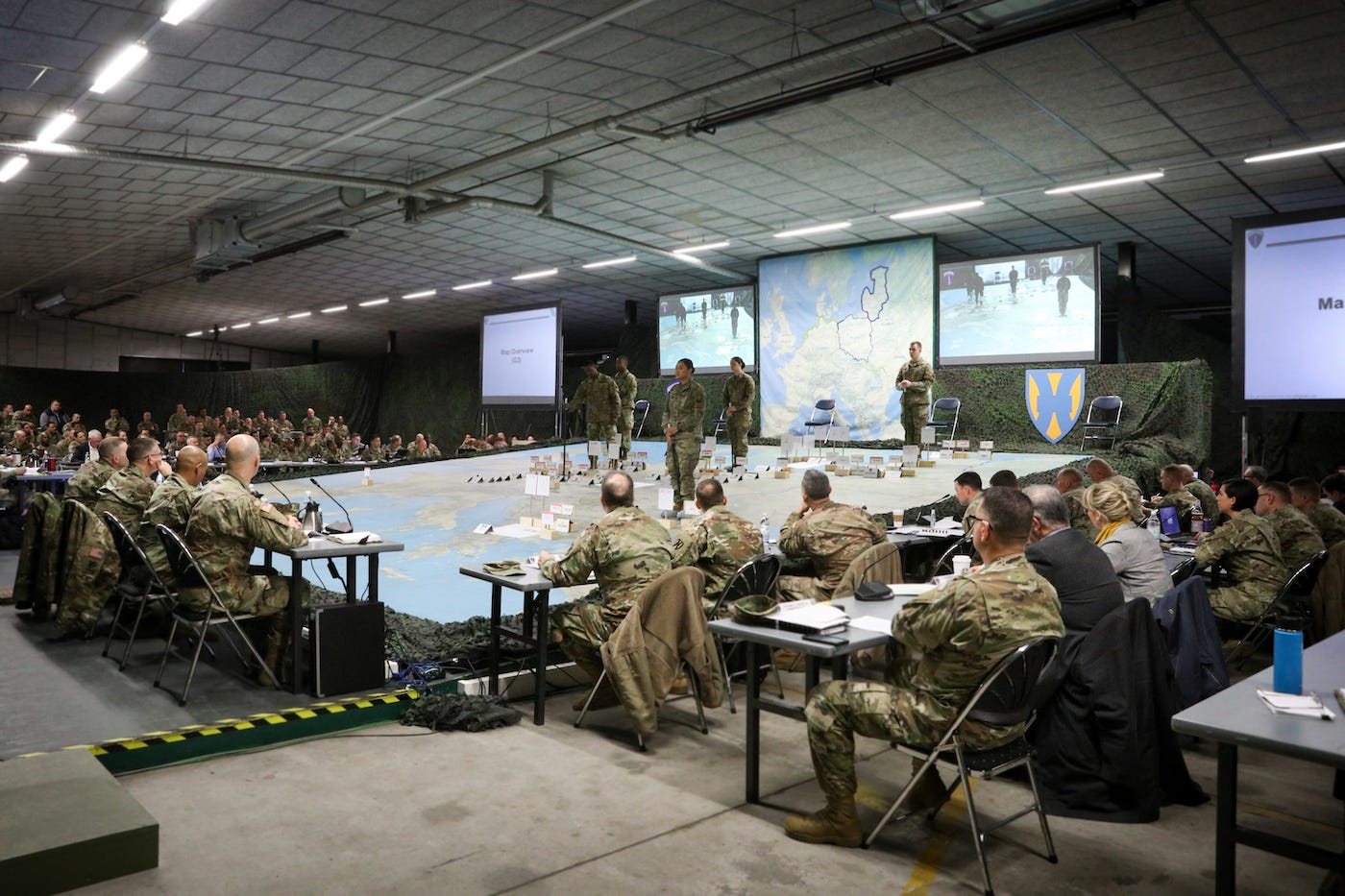 US Army/Pfc. Katelyn MyersMembers of the US Army’s 21st Theatre Sustainment Command at a rehearsal of concept drill at Rhine Ordnance Barracks to discuss the redeployment of participating units of Defender-Europe 20, March 10, 2020.

Moving thousands of US and other personnel around Europe and back to the US still presents an acute problem as governments attempt to inhibit the spread of COVID-19.

US Army Europe is following guidance on health protection and travel from the Office of the Secretary of Defence and referencing information from the Centres for Disease Control and Prevention on precautionary and preventative measures, the spokesperson said.

“All redeploying service members will be quarantined for 14 days and follow CDC guidelines for preventing the spread of COVID-19,” the spokesperson said.

For US personnel who will remain in Europe, US Army staff “is going through public health and medical support plans to identify any changes or pertinent issues that can be addressed within” the plan for Defender-Eurpe 20, which already had “robust medical support” for participants, the spokesperson said.

“We are tied closely to each of the host nations and their operations across Europe and will follow their leads,” the spokesperson added. 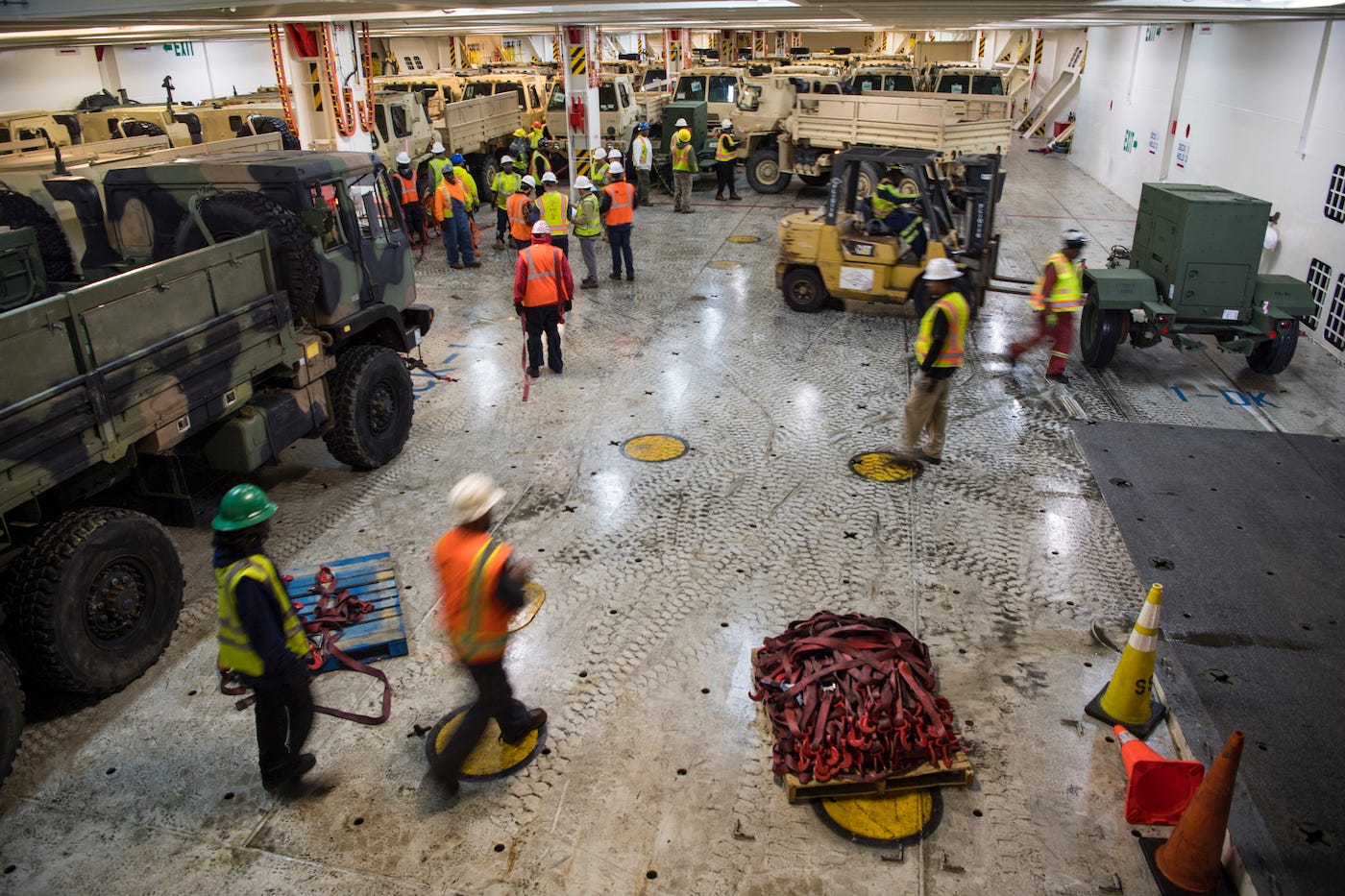 The main portion of Defender-Europe 20 was set for April and May, but the US military and its partners were hoping to learn from the deployment and redeployment of US forces and equipment.

A convoy that sailed from the US East Coast in late February, for example, was the first such operation since the mid-1980s, and new resources in Europe would allow the military to examine its “speed of move” from west to east and to assess how safely it could get cargo from ports to staging areas, Air Force Gen. Tod Wolters, the head of US European Command,told lawmakers at the end of February.

Asked about logistical challenges in Europe at an event in December, Wolters told Business Insider that Defender-Europe 20 had “already started, because the benefit of a large exercise is all the planning that takes place beforehand.”

“The strategic message is we can demonstrate our flexibility and adaptability to lift and shift large forces to any place on planet Earth to effectively deter … and that’s incredibly valuable,” Wolters added at the time.

Even with the exercise continuing in only a limited form, those lessons and that message haven’t been lost, according to Ben Hodges, who commanded US Army Europe before retiring as a lieutenant general in 2017. 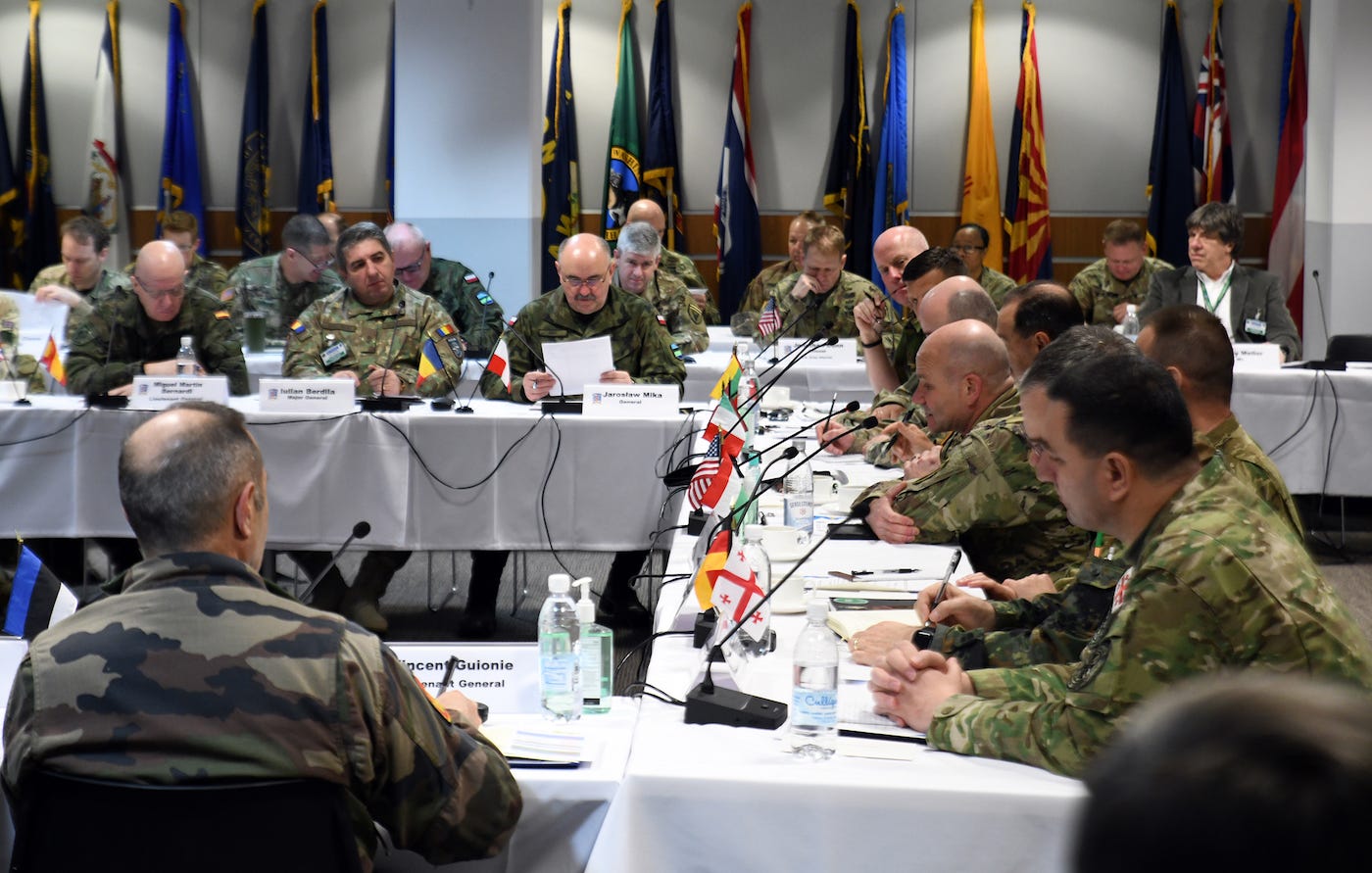 US Army/Spc. Stephen PerezLand force commanders from NATO and partner nations discuss the execution of DEFENDER-Europe 20 during a conference at US Army Europe headquarters in Wiesbaden, Germany, March 6, 2020.

“The main benefit of what has been accomplished is less about convoys and more about strategic deployment, drawing of equipment from [Army Prepositioned Stocks], and coordination/planning/and some execution of Host Nation Support,” Hodges said in an email Tuesday.

US Transportation Command, European Command, and US Army Europe, as well as NATO, “have all learned tons about all of this based on what has been done over the past year, even if they don’t get to complete the exercise as originally planned,” Hodges added.

Actions taken so far send a “strong signal to our allies and to the Kremlin that the USA remains committed to Europe, to deterrence, [and] to NATO,” Hodges said.

“The huge amount of money that was put forward for this exercise is a tangible manifestation of that commitment,” Hodges added, “as is the planned deployment that is/was underway.”

It was reported this year that Defender-Europe 20 would cost about $US340 million, roughly what the Army requested for fiscal year 2021 to conduct a similar exercise in the Pacific, according to Defence News.

The Army appears to want to scale back the next iteration of the Defender-Europe exercise, requesting $US150 million for it, but having already starting to work on Defender 21, which will be similar in concept but focus on deployment into southeastern Europe, “that speaks volumes,” Hodges said.