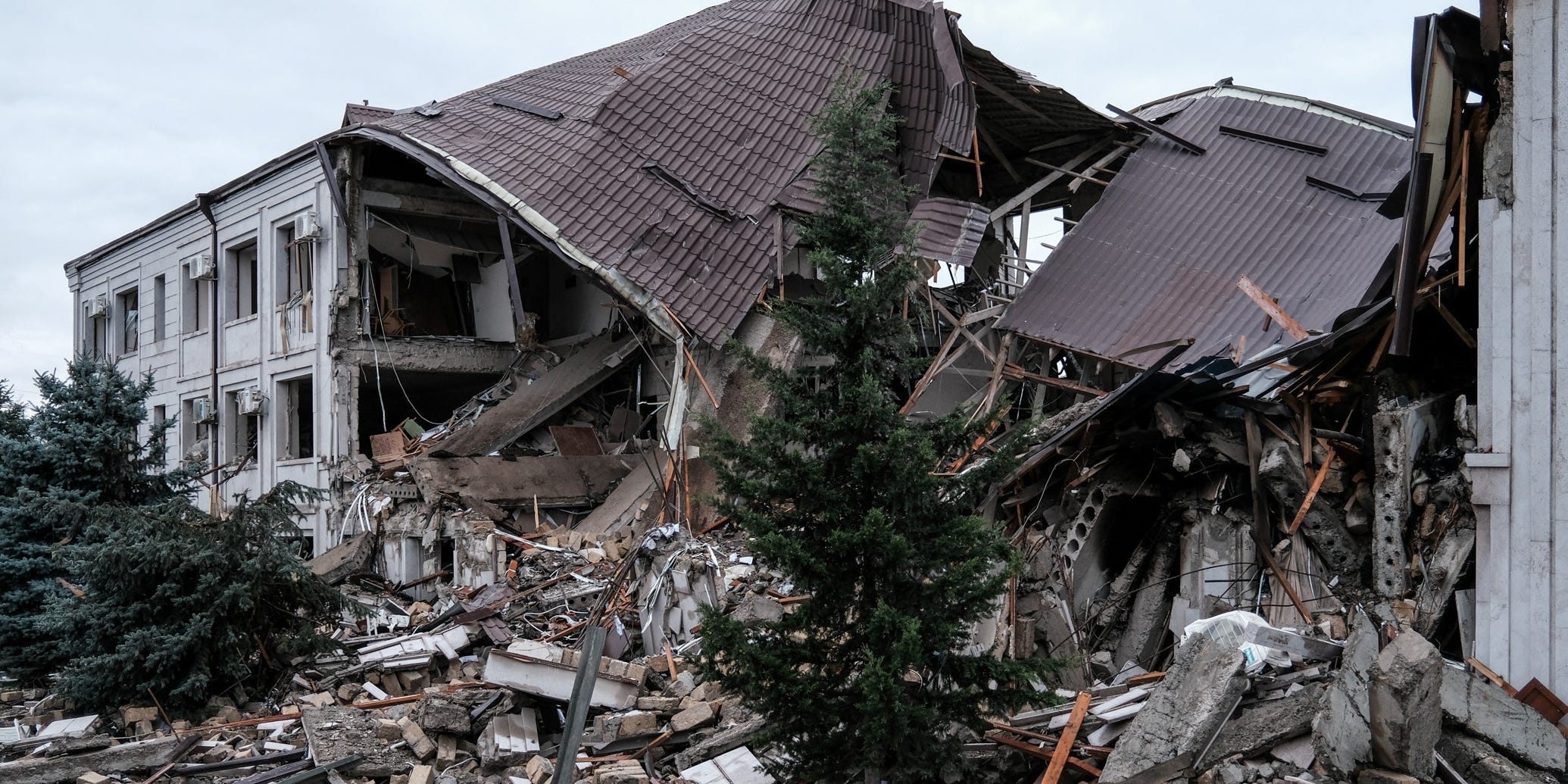 ReutersDevastation caused by the Nagorno-Karabakh conflict.

Clashes between Armenia and Azerbaijan over Nagorno-Karabakh have prompted many Armenian-Americans to lobby the US government to condemn Azerbaijan, fearing the country is seeking to continue what was started in the 1915 Armenian Genocide.

According to Armenian officials cited by the Associated Press, Turkey, a longtime supporter of Azerbaijan, is directly involved in the clashes and has sent mercenaries to fight. Turkey has denied those claims.

Officials from Azerbaijan also denied the reports to Insider, but some Armenian advocates say they are not convinced.

“Given reports, given the rhetoric and all of what is coming out, not only from Azerbaijan but also the backing of Turkey in this region, there seems to be an understanding that there’s a big brother-small brother player in town who happens to be [Turkish President Recep Tayyip] Erdogan and Azerbaijan,” Mariam Khaloyan, Director of Congressional Relations at the Armenian Assembly of America told Insider.

“And the idea would be to create a pan-Turkic region, and essentially eliminate Armenians from that region period,” Khaloyan said.

When the autonomous Nagorno-Karabakh region sought to join Armenia in 1988, a war broke out with Azerbaijan as the Soviet Union fell. When the dust cleared in the mid-1990s, Armenia had maintained Nagorno-Karabakh and taken over some of the surrounding area. At least 30,000 people died in that war. Another million people were scattered.

Nagorno-Karabakh is recognised internationally as Azerbaijan even though many ethnic Armenians live and govern there. 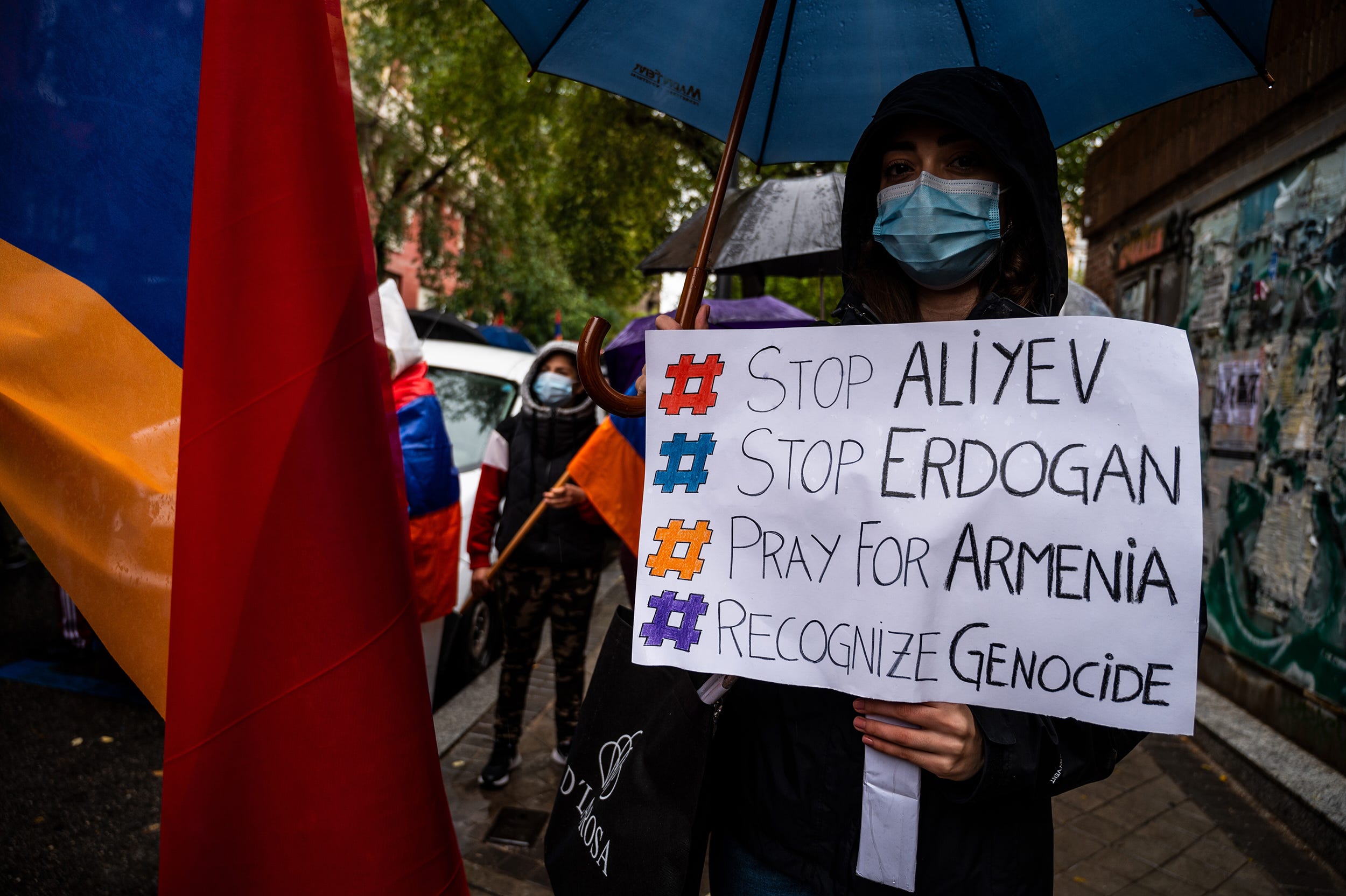 Marcos del Mazo/LightRocket via Getty ImagesDemonstrator carrying a placard against president of Azerbaijan Aliyev and President of Turkey Erdogan, as they march demanding peace in Armenia, denouncing ‘Erdogan’s Neo-Imperialism’ in Turkey and Azerbaijan’s aggression against Armenia amid the conflict in the Nagorno Karabakh region.

In an interview with Insider, the Armenian National Committee of America Executive Director Aram Hamparian said it’s not fair to paint the crisis as simply two sides fighting.

“If you look at the fact that Azerbaijan is the party that doesn’t like the status quo, they are the disruptive power that would have a motive to change the status quo,” Hamparian said.

He believes the US should take a more active role in addressing the conflict.

“The United States needs to act like the United States and get involved in calming the waters, but just the opposite has happened. This administration has had a hands-off attitude. They have been irresponsible â€” even reckless â€” in not engaging on this issue, even as Armenian civilians are just killed, left and right,” he said.

Armenian-Americans in multiple cities staged protests since the conflict reignited at the end of September. They have sough to raise awareness and call on elected officials to take a stand.

Khaloyan said her organisation is working with members of Congress to shed new light on what’s happening in Nagorno-Karabakh, and helping to introduce a resolution to “condemn Turkey and Azerbaijan’s attack on Armenia.”

Adil Baguirov, executive director and cofounder of the US Azeris Network, told Insider the Armenians’ claim that Azerbaijan is the instigator in this crisis is not true.

“They have very wild fantasies and very wild propaganda,” Baguirov said, arguing that Azerbaijan only wants international laws to be adhered to.

“There are the security council resolutions, dating back to 1993. So it’s already been in 27 years and they haven’t been fulfilled,” Baguirov said.

Those resolutions called on Armenian forces to leave Azerbaijan’s territory and urged both parties to resume negotiations.

Elin Syleymanov, an ambassador of Azerbaijan in Washington, DC, said in an interview with Insider he believes the narrative Armenians have told discounts the displacement of Azerbaijanis who were living in Nagorno-Karabakh in the 1990s.

“About a million people expelled, Azerbaijanis by Armenians,” Syleymanov said. “Let’s not go into history and try to justify your own ethnic cleansing and murder of civilians by referring to your own historic narrative, which has nothing to do with today and nothing to do with Azerbaijan.”

As the recent spate of fighting around Nagorno-Karabakh continued, Arakel Poladian, who is in Armenia, told Insider that families have fled the region and many have hid in bomb shelters. Poladian is originally from the US and originally planned to go to Armenia to spend time there due to the COVID-19 pandemic. Despite the conflict, he still chose to go and assist.

In an interview with Insider, he recalled the challenges he has seen while working with volunteers to buy and deliver essentials to women and children who have fled the violence.

Armenia and Azerbaijan reached a ceasefire agreement brokered by France in mid-October, but tensions in the region remain high as the detente between the two countries remains on shaky ground.