'Bring it on, I'm not backing down': Arizona top election official Katie Hobbs holds fast against attempts to undermine the state's election 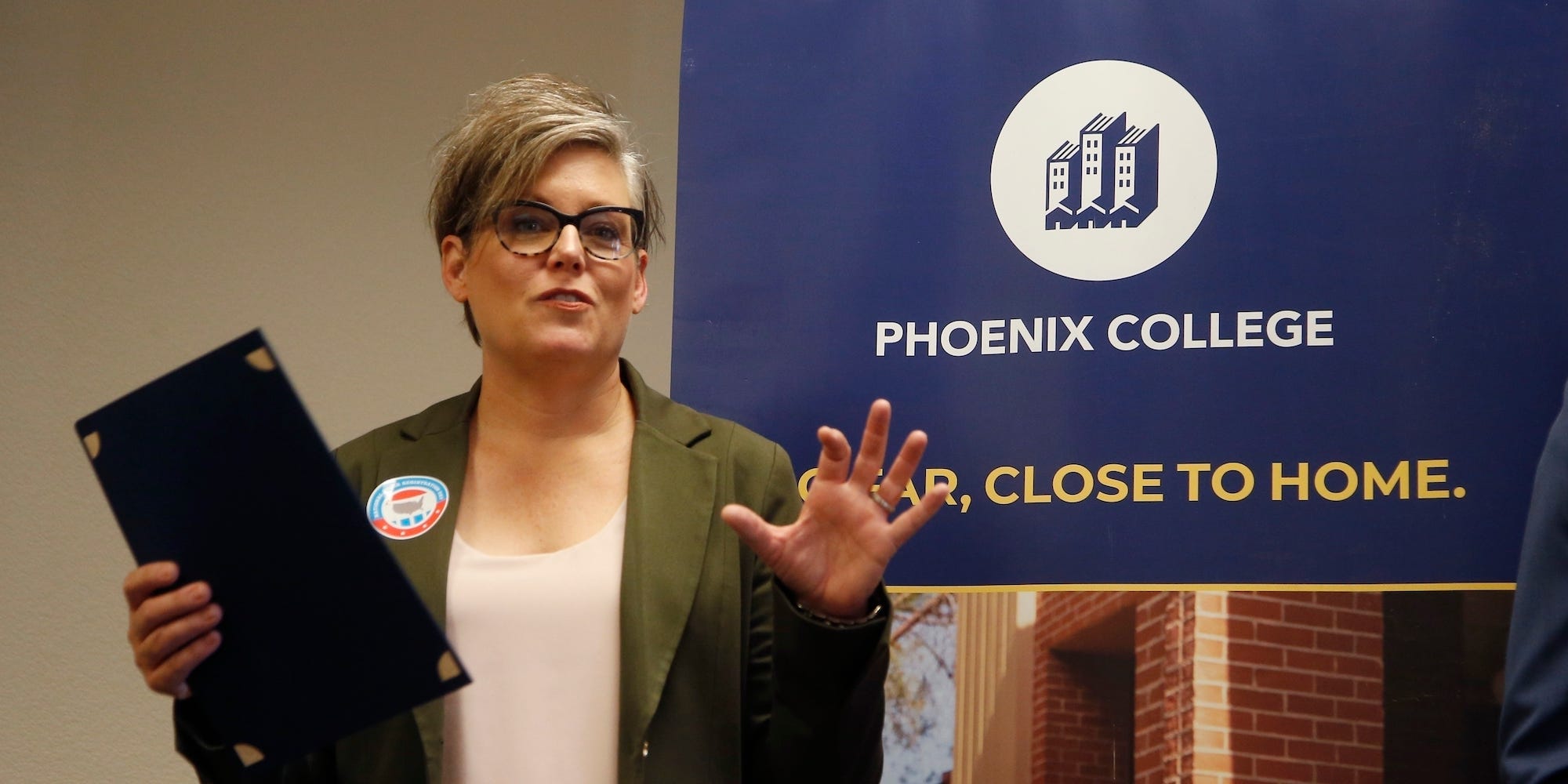 Arizona’s top election official Katie Hobbs is preparing for Arizona counties to certify their election results on Monday’s deadline after a tumultuous election cycle beset by unsubstantiated claims of fraud in Arizona’s election,protests outside election offices, and attacks on the integrity of the process she oversees.

“We’ve been in communication with all the counties, and the election officials have told us they don’t anticipate any delays in certification,” Hobbs told Insider in a Friday interview. “But we’ve been really clear that the statutory requirement for county certification is not discretionary, so we are prepared to take legal action if there are any delays.”

The certification of election results, which counties and states conduct after all votes cast have been accounted for and in some cases, after audits are conducted, are the next step in the process of the Electoral College voting to make Biden president.

With the Trump’s campaign’s legal challenges largely falling flat across the board, President Donald Trump and his allies have pivoted to trying to delay local and state officials from certifying the results of an election to make them official, including in Arizona, the Associated Press reported on Thursday.

In one particularly potent example this week, the four-person canvassing board in Wayne County, Michigan, deadlocked on whether to certify the county’s election results, with two Republican members initially opposing certification, reversing course and agreeing to certify the results after a public outcry, and the next day, signing affidavits indicating they wanted to take back their votes, which have already been sent to the state.

President-elect Joe Biden won Arizona’s 11 Electoral College votes, making him the first Democrat to do so since 1996,Decision Desk HQ and Insider projected.

The Arizona Republican Party recently lost a court case seeking to order Maricopa County, the state’s largest, to conduct a full hand-count audit of ballots, which could have delayed the county from certifying its election results, and is continuing to urge other counties to hold off on certifying.

As CNN noted, none of the post-election audits conducted by counties nor any of the lawsuits filed in court by Republicans have uncovered any kind of systemic fraud or irregularities in Arizona’s election.

Republican Rep.Paul Gosar even said outright that he believes the state should not certify its results and that the GOP-controlled state legislature should override the will of the voters and appoint its own slate of electors, a concept that Hobbs called a “pie-in-the-sky, never going to happen in this election” scenario.

“This is hardly the first inflammatory statement that Paul Gosar has made this election, including coming directly at me and undermining my integrity,” Hobbs told Insider. “What is also clear in his statement is that he doesn’t know what the laws of the state are because the legislature has absolutely no legal authority to appoint new electors. The legislature’s role is in establishing the laws that govern the selection of electors in our state, which they have done.”

OLIVIER TOURON/AFP via Getty ImagesPeople wait in line to vote at a polling place at the Scottsdale Plaza Shopping Centre in Scottsdale, Arizona, on November 3, 2020.

‘Bring it on, I’m not backing down’

Secretaries of state, who serve as the chief election officials in most US states, not only oversee and guide officials at the local level but have served as resources for accurate information about their state’s elections and as bulwarks against misinformation in the 2020 election.

Hobbs, who went into politics from a background as a social worker, served as a state legislator and minority leader of the Arizona state senate before being elected as Arizona’s Secretary of State in 2018, has devoted significant resources and attention to combatting misinformation, including some spread by officials in her state.

With Arizona at the centre of many high-stakes election disputes, Hobbs herself has faced pressure from Republicans not to certify the state’s results. In a statement on Wednesday, she also said she’s received “ongoing and escalating threats of violence directed at her family and office,” which she attributes to being “a symptom of a deeper problem” about the level of mistrust in American elections.

“I’ve been in elected office for 10 years now, and I spent eight years in the legislature before I was secretary of state. So to some degree, I was, unfortunate as it is, used to this kind of vitriol,” she told Insider.

Hobbs says while her career in politics and social work fully prepared for the level of personal attacks and threats, she worries about the effect it will have on fellow women in elected office, other election officials, and everyday citizens looking to participate in the democratic process.

Hobbs told Insider that one of her fellow female statewide officials in Arizona told her she’s “been completely caught off guard by it and said she would think twice before encouraging other women to run for office, and that it has made her rethink her current elected position.”

“I’ve pretty much taken the stance of, ‘bring it on, I’m not backing down,'” Hobbs said of how she approaches her job. “And frankly, a lot of the things that people are asking me to do aren’t even legal, and there’s no justification because nothing wrong happened in the election.”

The 2020 election has seen record amounts of misinformation and even outright disinformation and malicious lies. While the Trump campaign’s allegations of fraud haven’t held any water in courts, they have been pervasive in the public arena.

And with some notable exceptions, including Republican Secretary of State Brad Raffensperger of Georgia, many Republican officials have either given credence to or stayed silent on the campaign’s unfounded claims of widespread fraud and malfeasance.

In her Wednesday statement, Hobbs called out Arizona Gov. Doug Ducey for his “deafening silence.” But Looking beyond this year, Hobbs holds out optimism that 2020 is not the beginning of a long-term trend towards elected officials seeking to discredit election outcomes â€” and tar the work of election officials like herself in the process.

“I sincerely hope that the reluctance we’ve seen from Republican elected officials to speak out about how damaging and dangerous these kind of actions and statements are, that this is a temporary situation that will go away when Trump is no longer in the White House,” adding, “I hope it’s temporary. I really do, because I think that the kind of unwillingness we’re seeing cause stand up for our Constitution and our democracy is just very damaging.”