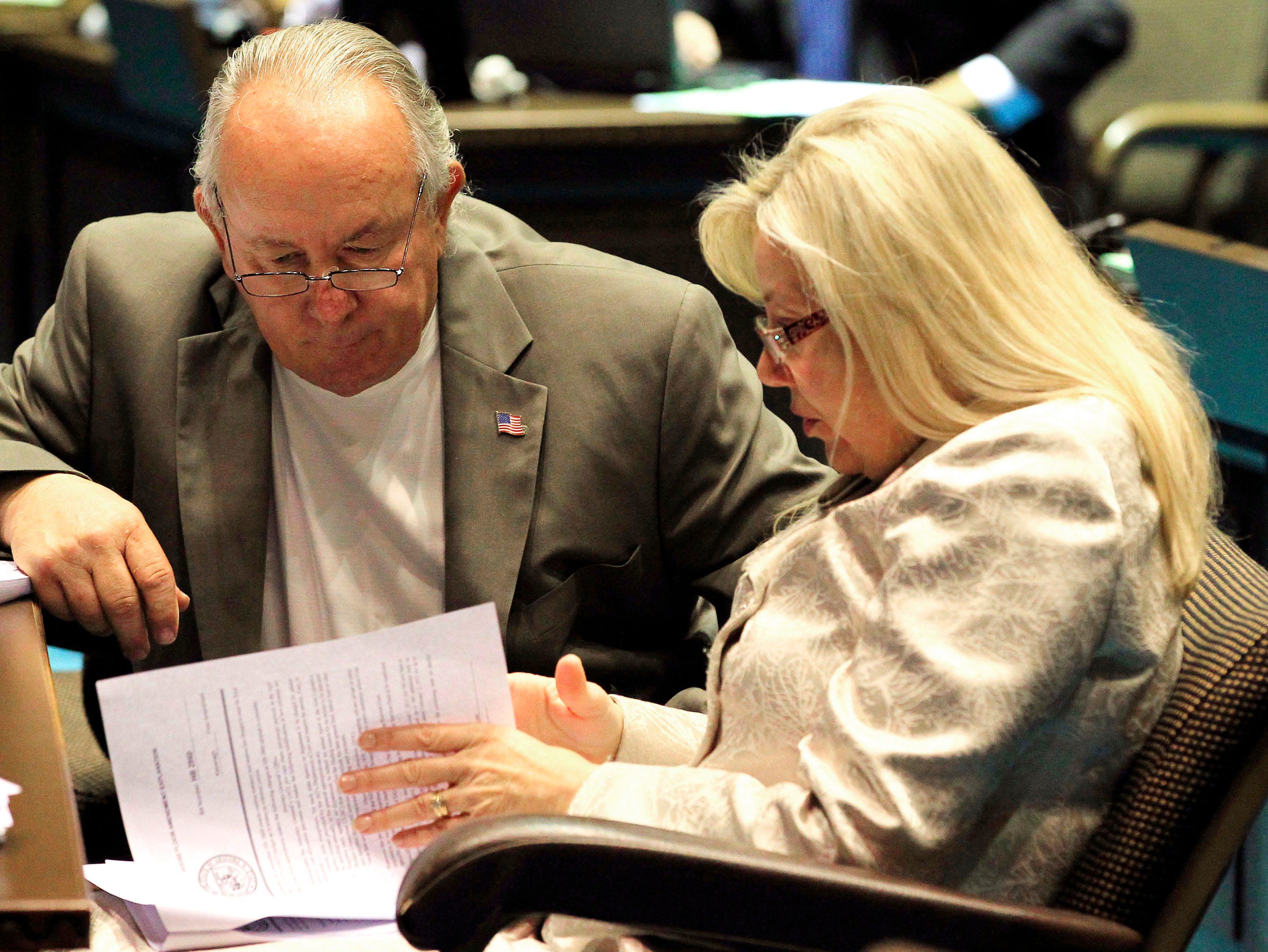 https://newsroom.ap.org/detail/ArizonaBudget/8df51db64b4340b4bac2e05d6a75c65b/photo?Query=%22John%20Fillmore%22&mediaType=photo,video,graphic,audio&sortBy=arrivaldatetime:desc&dateRange=Anytime&totalCount=5&currentItemNo=1Rep. Debbie Lesko, right, R-Glendale, speaks with Rep. John Fillmore, R-Apache Junction, as budget amendments are brought to a vote for a new Arizona state budget in the House of Representatives at the Arizona Capitol Tuesday, May 1, 2012, in Phoenix.

An Arizona state representative is facing intense backlash from parents and other lawmakers after comparing nonbinary people to barnyard animals.

“I don’t believe that we as a society should have all of the different binaries identified,” Arizona Republican State Rep. John Fillmore said during a committee meeting on Wednesday.

“What’s going to happen when someday someone wakes up and they want to go to a far extreme and identify as a chicken or something for crying out loud?” Fillmore continued. “Where do we draw the line?”

This comment from Rep. Fillmore shook @MoganMegan to her core.

“What’s going to happen when someone, someday wakes up and they want to go to a far extreme and identify as a chicken.”

Fillmore at the time of his remarks had been explaining his proposed bill, which aims to limit gender identification options on any state documentation, KPNX, an NBC affiliate, reported.

Having to choose between male and female options can often alienate nonbinary people who don’t identify as either gender.

Fillmore’s comments sparked immediate backlash from both lawmakers and parents who listened to his remarks during the committee session.

“I was angry,” Hamilton said. “There were three mums who made themselves very vulnerable and put their families in the public arena by sharing their very personal experience as to why a bill like this can be hurtful and detrimental for their children’s well-being.”

Fillmore also has an ethics complaint filed against him.

“Representative Fillmore continuously made discriminatory and harassing comments during public testimony and in his response compared members of the LGBTQ+ community to farm animals,” the complaint reads, according to KPNX.

“By his actions, Representative Fillmore has engaged in conduct that compromises the character of himself, the integrity of the Arizona State House of Representatives, and shows a lack of respect for members of the LGBTQ+ community,” the complaint continues.

Fillmore’s office did not immediately respond to a request for comment from Insider.

In a video posted to Twitter, Fillmore said he “in no way” is trying to “tear” down nonbinary people.

“What I’m trying to do is give clarity to our government,” he continued. “That when we give an identification such as on a driver’s licence or a police officer is told to look out for a male and things of that nature, the gender dysfunction thing, which is being pushed by some people on the left, is now allowing, for instance, men to enter into the restrooms of little girls. And it creates situations that I don’t think are beneficial to society and the nuclear family as a whole.”

Gender-neutral bathrooms have been a point of tension for years. The Obama administration in 2016 granted transgender students the right to use public school bathrooms and locker rooms that matched the gender with which they identify. The Trump administration reversed some of these protections. Lawsuits sprung out of both decisions.

In December 2020, the Supreme Court struck down an appeal from an anti-LGBT group after Oregon parents complained that a school had allowed transgender people to use bathrooms corresponding to their gender identity.

In a statement to KPNX, Fillmore said the ethics complaint was filed “entirely without merit.”

“It’s rather unfortunate that some opponents of the bill have unfairly and grossly mischaracterized my comments at Wednesday’s hearing,” Fillmore said. “I invite people to listen to my actual remarks, which do not remotely match the distorted version critics have alleged.”