'This is not good': The Arecibo telescope just suffered even more damage that will set back searches for asteroids and aliens 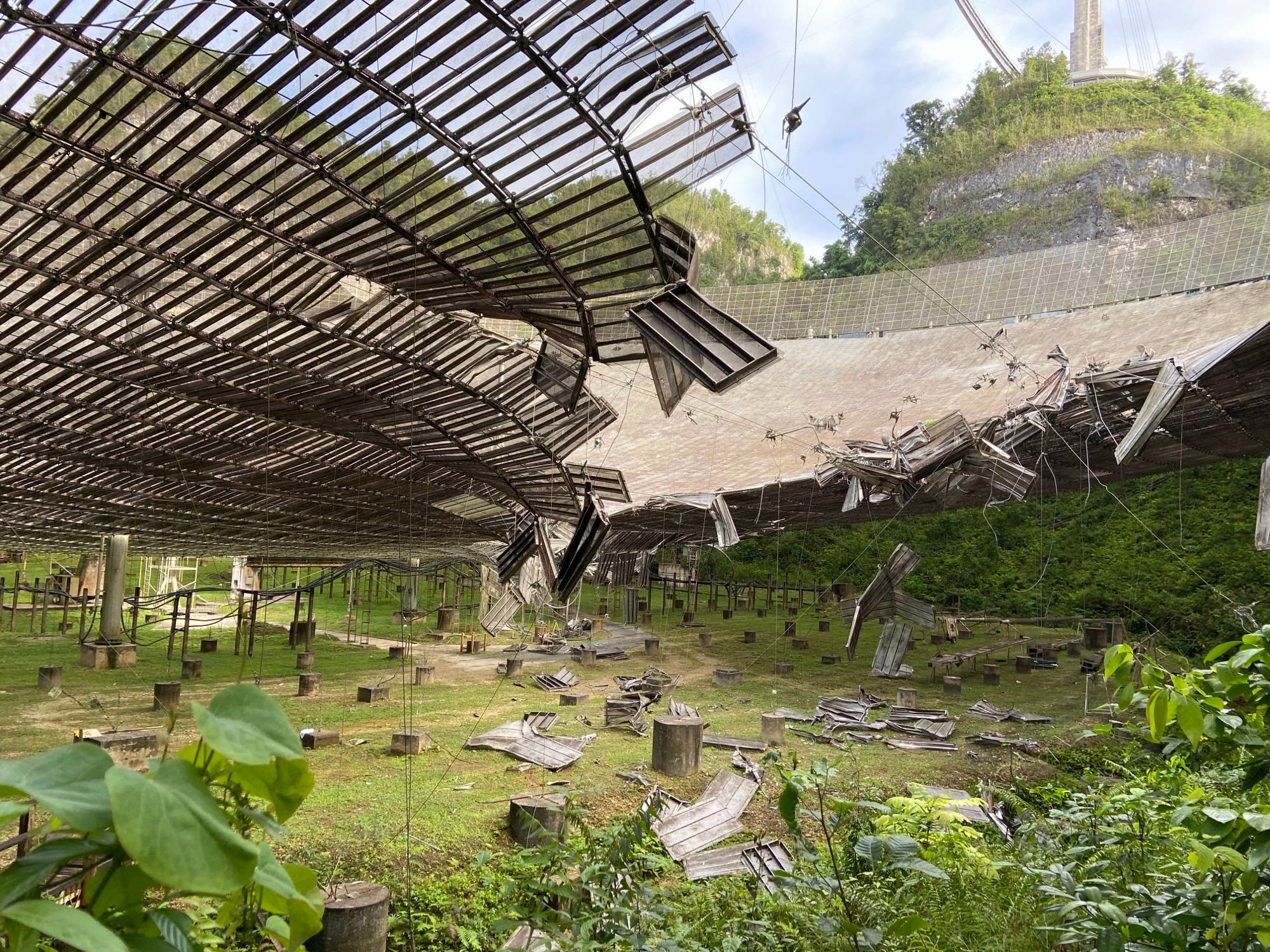 An important astronomical observatory has suffered its second damaging disaster of the year.

In August, a 3-inch-thick auxiliary cable at the Arecibo Observatory popped out of its socket and tore a 100-foot gash into the reflector dish below. Then on Friday evening, a main cable broke from the same tower and crashed into the dish, further damaging the panels as well as other cables.

Officials are investigating the new failure, though they don’t yet know why the latest cable snapped. A press release from the University of Central Florida, which co-operates the telescope, suggests the break may be related to the extra weight the cable has carried since August.

The extent of the new damage was not immediately clear. No people were injured in either incident.

“This is not good, but we remain committed to getting the facility back online,” observatory director Francisco Cordova said in the release. “It’s just too important of a tool for the advancement of science.”

Many people may recognise the observatory from the James Bond film “GoldenEye,” but scientists know it for its contributions to planetary safety and the search for alien life. Astronomers use the 20-acre radio telescope to study hazardous asteroids as they fly past Earth, in hopes of identifying space rocks on a collision course early enough to intervene before they strike.

Scientists have also used Arecibo to search for signs of intelligent extraterrestrial life. In 1974, the observatory beamed out the most powerful broadcast Earth has ever sent to communicate with potential aliens. In 2016, it detected the first repeating fast radio bursts â€” mysterious space signals that scientists now think come from dead stars.

“Its sensitivity is so much greater than any other instrument and it’s so much more flexible,” Joanna Rankin, a radio astronomer at the University of Vermont, told Science, adding that Arecibo can see “from the stratosphere to the far reaches of the universe.”

“It would be a tremendous shame if that was lost,” she said.

Repairs could cost tens of millions of dollars 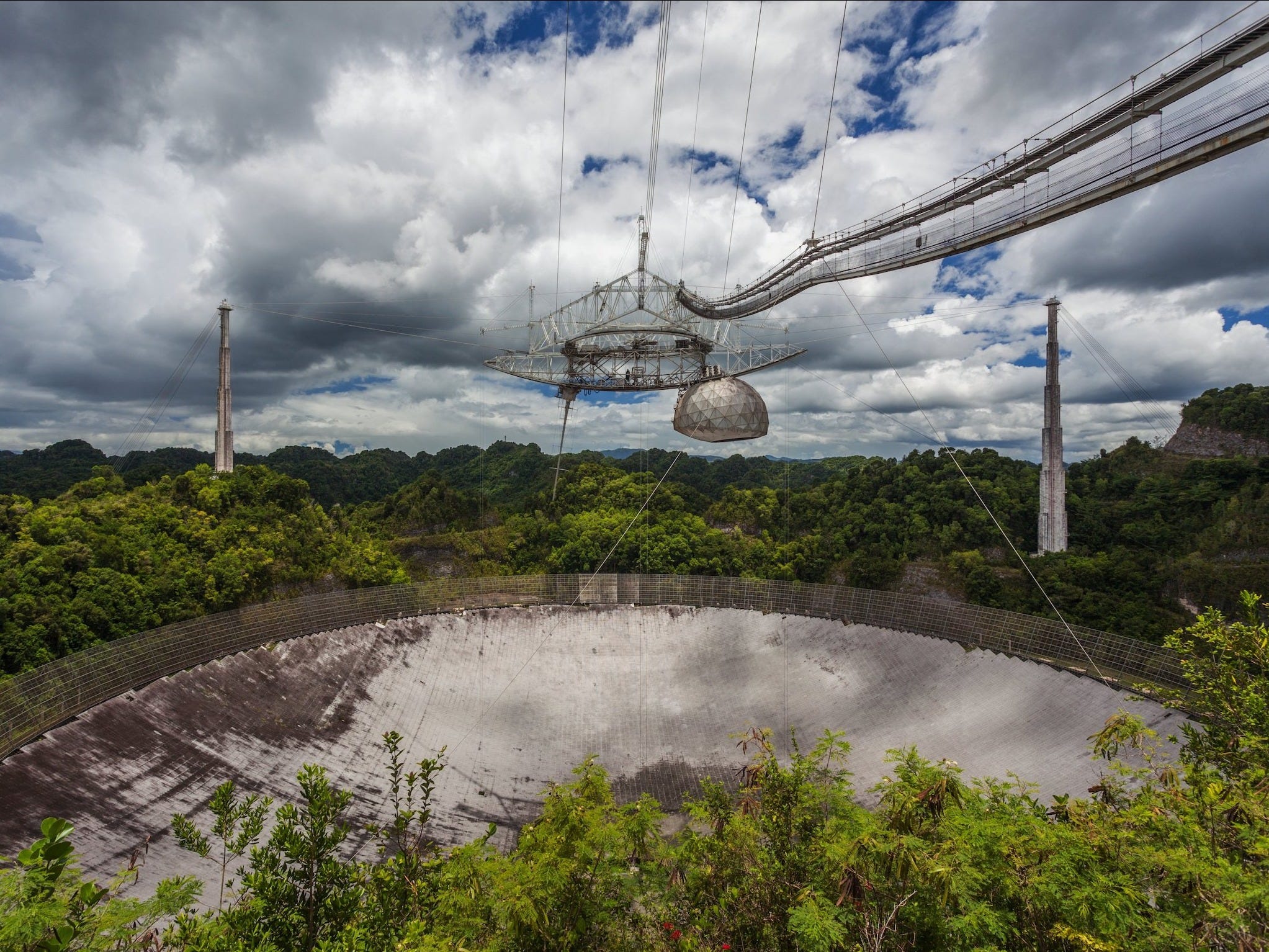 Universal Images Group via Getty ImagesThe Gregorian Dome hangs over the 1,000-foot reflector dish of the Arecibo Observatory in 2012.

Engineers had been set to begin repairs from August’s accident this week. But after the new failure, they are instead working to secure and stabilise the observatory’s structure.

“The team hopes to be able to reduce the tension in the existing cables at the tower and install steel reinforcements to temporarily alleviate some of the additional load that is being distributed among the remaining cables,” the UCF statement said.

Observatory managers also plan to speed up the delivery of two new cables they had already ordered. Experts will reassess what else is needed as they evaluate the structure in the coming days.

The university said there is currently no cost estimate for the necessary repairs.

In October, UCF applied for $US10.5 million from the National Science Foundation (NSF), which owns the observatory, for emergency repairs, Science reported. When the observatory was struck by Hurricanes Irma and Maria in 2017, the NSF granted $US2 million to repair that damage.

The NSF allotted $US12.3 million for four-year repairs and infrastructure improvements in 2019, UCF reported.

“We have been thoughtful in our evaluation and prioritised safety in planning for repairs that were supposed to begin Tuesday. Now this,” Cordova said. “There is much uncertainty until we can stabilise the structure. It has our full attention. We are evaluating the situation with our experts and hope to have more to share soon.”