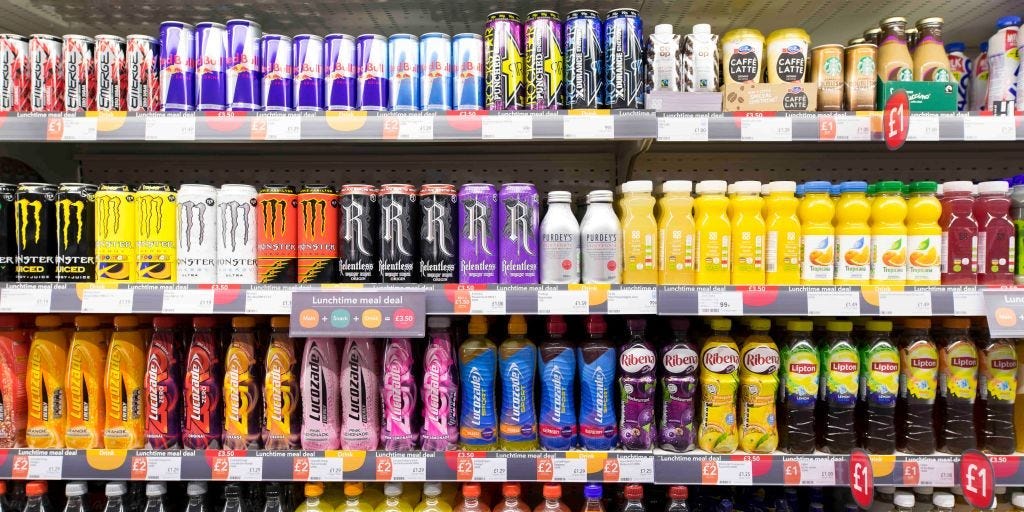 Matthew Horwood/Getty ImagesThere are a variety of energy drinks, but almost all contain some combination of caffeine, sugar, and B vitamins.

Energy drinks are meant to improve concentration and help you focus, but the ingredients in these beverages can cause adverse health effects. Here is what you need to know about energy drinks and how they can affect your health.

What are energy drinks?

According to Popeck, some common ingredients found in energy drinks include:

These beverages can boost energy and concentration, but they can also cause adverse health effects like a rapid heart rate and increased blood pressure, Popeck says.

Yes, energy drinks are bad for you

In the US, more than 20,000 emergency room visits in 2011 were associated with energy drink use. A small 2014 review found that out of 11 patients with serious heart problems, including cardiac arrest, five reported heavy energy drink consumption.

1. Energy drinks are bad for your heart

Caffeine is the main ingredient found in energy drinks thanks to its ability to increase alertness. When consumed in large quantities of more than 400 milligrams per day, caffeine can cause:

Most energy drinks contain between 70 and 240mg of caffeine per serving, while a cup of coffee contains about 100mg of caffeine. According to the US Food and Drug Administration (FDA), the safe limit of caffeine for adults is up to 400mg per day. The American Academy of Pediatrics discourages the consumption of caffeine in children under the age of 12 and recommends those 12 to 18 consume 100 mg or less a day.

A small 2016 study in healthy individuals revealed that after consuming a 32oz energy drink for three days in a row, cardiac QT interval increased, which is associated with sudden death. Greater risk occurs when consuming multiple energy drinks in a short period of time, Popeck says.

Another 2018 analysis found energy drinks can cause problems with heart rate and increase systolic blood pressure.

“These drinks are generally stimulants and can put a demand on the heart,” says Mohamad Moussa, MD, an associate professor in the University of Toledo College of Medicine and Life Science. “If someone already has heart disease, which is one of the leading causes of mortality in the United States, energy drinks could have a negative effect on the body.”

2. Energy drinks are loaded with sugar

Excessive sugar intake can cause inflammation, which has been linked to a number of chronic conditions, including cancer, diabetes, and heart disease, Popeck says. Consumption of added sugars can also increase the risk of obesity and non-alcoholic fatty liver disease.

3. Energy drinks should not be mixed with alcohol

Energy drinks are often mixed with alcohol, especially among young adults. According to the National Centre for Complementary and Integrative Health (NCCIH), about 25% of college students consume alcohol with energy drinks.

When combined with alcohol, energy drinks can alter your intoxication levels, making you feel less intoxicated and energised while still experiencing signs of alcohol impairment, like slurred speech, poor coordination, and memory impairment.

The combination also increases the risks of binge drinking because the stimulating effects of energy drinks can mask the depressive effects of alcohol, causing you to drink more. Drinkers ages 15 to 23 who mix alcohol with energy drinks are four times more likely to binge drink.

4. Energy drinks are harmful for teens

Energy drinks are especially harmful to adolescents who are still growing and developing, and cannot handle the side effects of energy drinks, Moussa says.

According to the NCCIH energy drinks increase the risk of several health conditions for teens and young adults, including:

Despite their adverse health effects, energy drinks are heavily marketed to young people.

Are energy drinks ok in moderation?

Energy drinks are unhealthy in nature. They can be safe if consumed in moderation by people without underlying health conditions, Popeck says, though there are better ways to get an energy boost.

Both Popeck and Moussa recommend limiting your consumption of energy drinks and instead increase energy and concentration with healthier alternatives, like:

Energy drinks are intended to give you a jolt of energy and increase focus and concentration, but they are loaded with caffeine and sugar, which can cause negative health effects when consumed excessively. Limit your intake of energy drinks and focus instead on eating a nutritious diet and getting adequate sleep to improve concentration and energy levels.