'Like nothing that has ever been seen before': Here's what 4 economists said about the April jobs report from the US

Friday’s April jobs report was bad on pretty much every front – the US economy shed 20.5 million jobs in one month, the largest drop on record, erasing nearly a decade of gains.

“The size of the devastation is incredible, then you have to consider the speed of it as well,” Nick Bunker, an economist at Indeed, told Business Insider, adding that the current shock to the US rivals that of the Great Recession.

“The fact that we’re seeing magnitudes of devastation that big, but in two months, it’s hard to wrap your mind around,” he said.

A dive into the data beyond the headline number showed further signs of deterioration. Almost every industry shed jobs in April, led by 7.7 million lost payrolls in leisure and hospitality.

Women bore most of the job losses, and the unemployment rates for black and Hispanic workers fell to 16.7% and 18.9%, respectively. Hourly wages rose, but the measure reflects that lower income workers have been hit hardest by coronavirus-induced layoffs.

People dropped out of the labour force en masse, and only about half of workers currently have a job. A broader measure of unemployment, which includes workers who have stopped looking for a job and those working part-time who would like full-time employment, rocketed to nearly 23%, also a record high.


Read more:
‘We’ll see the true financial carnage come’: A 47-year market veteran warns the fallout from the coronavirus is only halfway finished – and says it will take decades for the market to carve out new highs

There was one potential bright spot in the report – 18.1 million workers were classified as temporarily unemployed, suggesting that they may be able to quickly re-enter the workforce when lockdowns are lifted. Recently, some states have begun to slowly reopen parts of their economy, sending people back to work.

But the fear is that some businesses won’t survive the pandemic, meaning that these workers will become permanently unemployed. This doesn’t bode well for any future economic recovery, and means that a swift rebound is becoming increasingly unlikely.

Here’s what four economists had to say about the dismal April jobs report: “So we lost ‘only’ 20.5 million jobs. It says so much about the moment that we’re in that that feels like a relief,” Martha Gimbel, an economist at Schmidt Futures, told Business Insider. “It’s just unspeakably sad and horrible.”

The job losses across nearly all industries show that “there’s no part of the economy that is really escaping unscathed right now,” Gimbel said. “The report just reflects incalculable human suffering.”

She continued: “One of the scariest numbers in the report was the issue of people who mistakenly identified themselves as employed, but absent from work,” she said, adding that BLS notes that if those workers had been counted as unemployed, the rate would have been more than 19%.


Read more:
Chad Glauser has dominated his benchmark for 28 months straight using just 3 ETFs. Here’s what they are, and how they have combined to beat the market.

“There are a lot of workers in that group who are telling themselves that they have a job to go back to and they likely won’t,” she said. “If the situation doesn’t get better, temporary layoff can become permanent.”

She also noted that the jump in wage growth was a purely compositional effect as the bulk of jobs lost were low-paying ones. “No one thinks that the wages are growing faster. It just shows how brutal this has been for a low-paid workers,” she said. 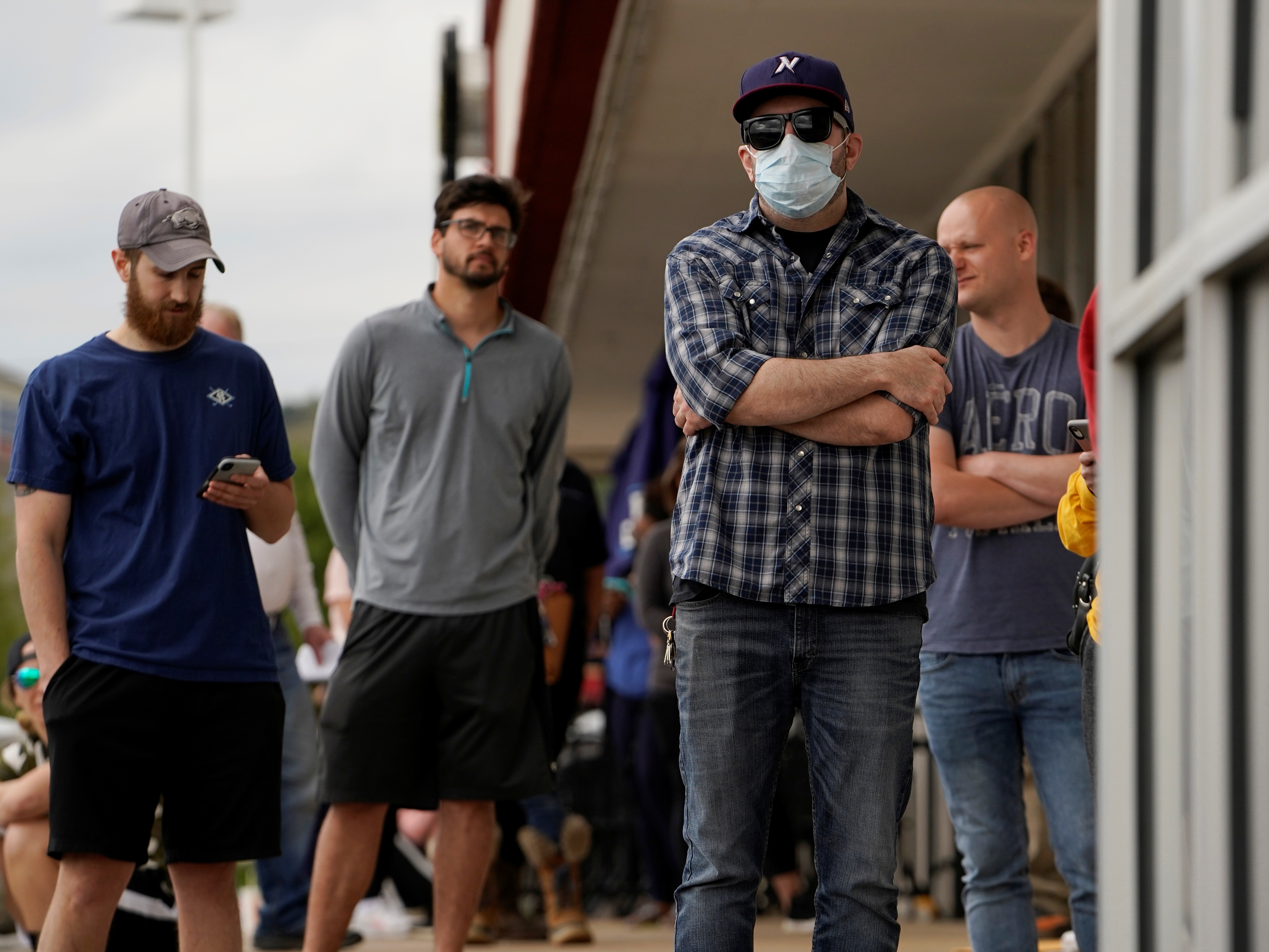 “In one line: Catastrophe, enumerated,” wrote Ian Shepherdson, chief economist at Pantheon Macroeconomics, in a Friday note. “The plunge in payrolls ought to have lifted the unemployment rate to almost 20%, other things equal, but the BLS again reports that large numbers of people classified themselves as employed but absent from work, rather than unemployed on temporary layoff.

“This artificially suppressed the unemployment rate by about five percentage points. The problem of misclassification likely will persist for the foreseeable future so the headline unemployment rate will not be a useful guide to the real state of the labour market. The payroll and jobless claims numbers are more reliable.

“Usually this makes no visible difference to the data, but in April the job losses were disproportionately concentrated in relatively low-wage sectors like leisure and recreation. The disappearance of these people from the sample drove up the average level of earnings for the people who remained in employment, but it does not mean that underlying wage growth is rising.

“The opposite story will emerge in the data over the remainder of the year, because unemployment will remain elevated for the foreseeable future, putting downward pressure on wage growth.”

3. Navy Federal Credit Union: “It was a real shock.” “We knew what was coming,” Robert Frick, corporate economist with Navy Federal Credit Union, told Business Insider. Still, Friday’s report “drove home how terrible our situation is, how many millions of people are out of work, how low our economy is probably going to go in the second quarter. It was a real shock.”

He continued: “The hopeful thing is that perhaps 18 million of those 33 million people who recently filed for unemployment are technically furloughed. So they may get their jobs back. If that’s true, then this’ll be the shortest depression in history.”

The number of furloughs now is a big difference from the Great Recession, Frick said, which could be a good thing. “Right now you have deep pessimism about the current situation. Obviously, you know, this is, this is something that we’d never thought we’d experience, but people’s longer term expectations are relatively high,” he said.

“There’s still a lot of hope in the economy and consumer confidence is extremely important – it keeps people spending, keeps them thinking about being in the workforce,” he said.


Read more:
Russell Investments says these 4 stocks are perfect for investors on the hunt for ESG-friendly returns

4. AllianceBernstein: “Like nothing that has ever been seen before” “The employment report for April was like nothing that has ever been seen before,” Eric Winograd, senior economist at AllianceBernstein, wrote in a Friday note.

“If anything, the data probably understate the magnitude of the weakness; we know that several million workers filed new claims for unemployment insurance in late April after the data for today’s report were collected. So, however bad it appears in the data, the actual situation is even worse.”

He continued: “All that said, I don’t think today’s report is relevant to our understanding of the economy or to the formulation of a forward-looking view. We already knew that the labour market was in crisis; data that reflect that crisis don’t change our understanding and thus don’t add new information.”

“The question that matters isn’t whether the economy is at a standstill-it is. What matters now is when and how the economy recovers, and today’s data are largely backward-looking and therefore don’t alter our fundamental view of the outlook.”