A short remark by Apple CEO Tim Cook to The Independent reveals a big part of the master plan behind Swift — an Apple-created programming language that’s found a large-and-growing group of fans.

The Independent’s David Phelan had the chance to catch up with Cook during a visit to the UK, where the chief executive met with UK-based “Monument Valley” developer Ustwo, as well as university students and other developers.

Phelan asked Cook how Apple thinks about designing hardware to suit the needs of those developers. According to Cook, it’s a two-part process: First, the hardware itself. Second, tools like Swift to help developers take full advantage of everything the hardware has to offer.

We try to continually push ourselves to do more and more, not just on the hardware side but also in terms of developers’ tools so they can take advantage of the hardware that’s there, in the best way. That’s the heart of what the coding software Swift is about. We’ve created the language and our hope was that you can get a lot more people coding, and then secondly have people push more to take advantage of the latest hardware.

This answer is actually very telling, if you read between the lines.

The success of the iPhone has always been dependent on the App Store — a strong, well-stocked App Store with the newest and most cutting-edge apps keeps users happy on their iPhones. Put a different way, users will go to where the apps are, and there’s a serious risk that people would abandon Apple if Android (or Windows) got all the new hotness.

So, Apple makes Swift, a programming language that developers want to use, and pushes it as the best way for kids and other novices to learn coding, to boot. Swift can be used to make apps for other operating systems, thanks in no small part to the efforts of Swift’s huge community of programmers.

But Swift is best on iPhone and iPad, because of Apple’s own investments in the programming language. So as developers use Swift more and more, they’re going to be making apps that simply run better on an iPhone. That, in turn, is going to reinforce Apple’s perception as the premiere platform for developers and customers alike.

We’re already seeing a little of this, too: Lyft rewrote its iOS app in Swift, and found that it helped its developers be more productive, even as it improved the app’s performance on iPhones.

If and when more developers adopt Swift, and as Apple hopes, see those gains, it’s going to improve iPhone’s market position in the eternal fight against Android. 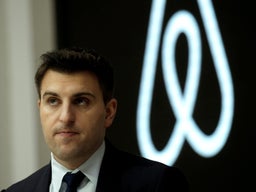