Apple announced on Monday that it will hold an event at the Bill Graham Auditorium in San Francisco on September 7th to announce this year’s iPhone.

If Apple sticks with its current naming system, it will be called the iPhone 7.

Apple’s factories have already started producing the device. There have been a lot of leaks, rumours, and suggestions about what Apple will reveal this September.

Want to know the latest? Here’s everything we know about Apple’s upcoming iPhone:

Apple's going to announce the new iPhone on the 7th of September. It will likely come in two different models with different screen sizes: one with a 4.7-inch screen and one with a 5.5-inch screen. This is reportedly the smaller version. But ultimately it will look a lot like the iPhone 6 and 6S. Apple could introduce a new colour: deep blue. The base model could also start with 32GB of storage instead of the usual 16GB. One possibility is that the larger iPhone 7 -- the 'plus' or 'pro' model -- could have a camera with two lenses. The regular 4.7-inch version is expected to have a better camera too. Purported leaked pictures show an enlarged lens. Otherwise, the two devices will look fairly similar to the current iPhone 6 and 6S on sale. Apple might add a new colour option, though. Some rumours peg it as dark blue, but a 'space black' option is far more likely. Thanks Martin Hajek for the drawing.

The biggest change will probably be -- make sure you're sitting down -- that the iPhone 7 won't have a headphone jack. Apple's probably going to use the space for a second speaker. If you want to listen to music, you'll have to use Bluetooth headphones. Apple sells some nice wireless Beats. Or headphones may be able to plug in through Apple's Lightning port, which is usually used for charging. It's unclear if Apple will include a set of Lightning earbuds with the iPhone 7 or an adaptor. 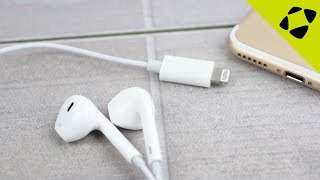 Another advantage of connecting earbuds through the Lightning port is that it could open up new approaches to noise-cancelling earphones. The home button is also likely to be redesigned. The new button will use a motor to simulate a click, as opposed to the current button which physically clicks. It will probably use the same technology as 3D Touch. This is kind of a no-brainer, but it's going to have a faster chip inside. Apple will probably call the chip the A10. Apple's chips are one of the company's biggest strengths. And there's a chance that the internal battery could be bigger as well, which means better battery life. The next iPhone is likely to be water-resistant. Last year's iPhone started at $650, and this year's version will probably stay at the same price. But the high-end version could include 256GB of storage instead of 128GB. Here's our best guess at Apple's release date. The phone emoji are potential announcement dates, and the boxes indicate the days you might be able to buy one in a store. But the real exciting iPhone could be the 2017 version, which has been rumoured to have a glass body, wireless charging, and an edge-to-edge screen. That was basically confirmed by the CEO of the company that makes aluminium iPhone shells for Apple. Of course, Apple has said nothing officially about any of these devices, as it never says anything until they're almost ready for sale. So all these rumours, leaks, and hunches could be totally incorrect.