Apple's big new iPhone update has finally arrived. Here are 14 of the most useful features coming to your iPhone. 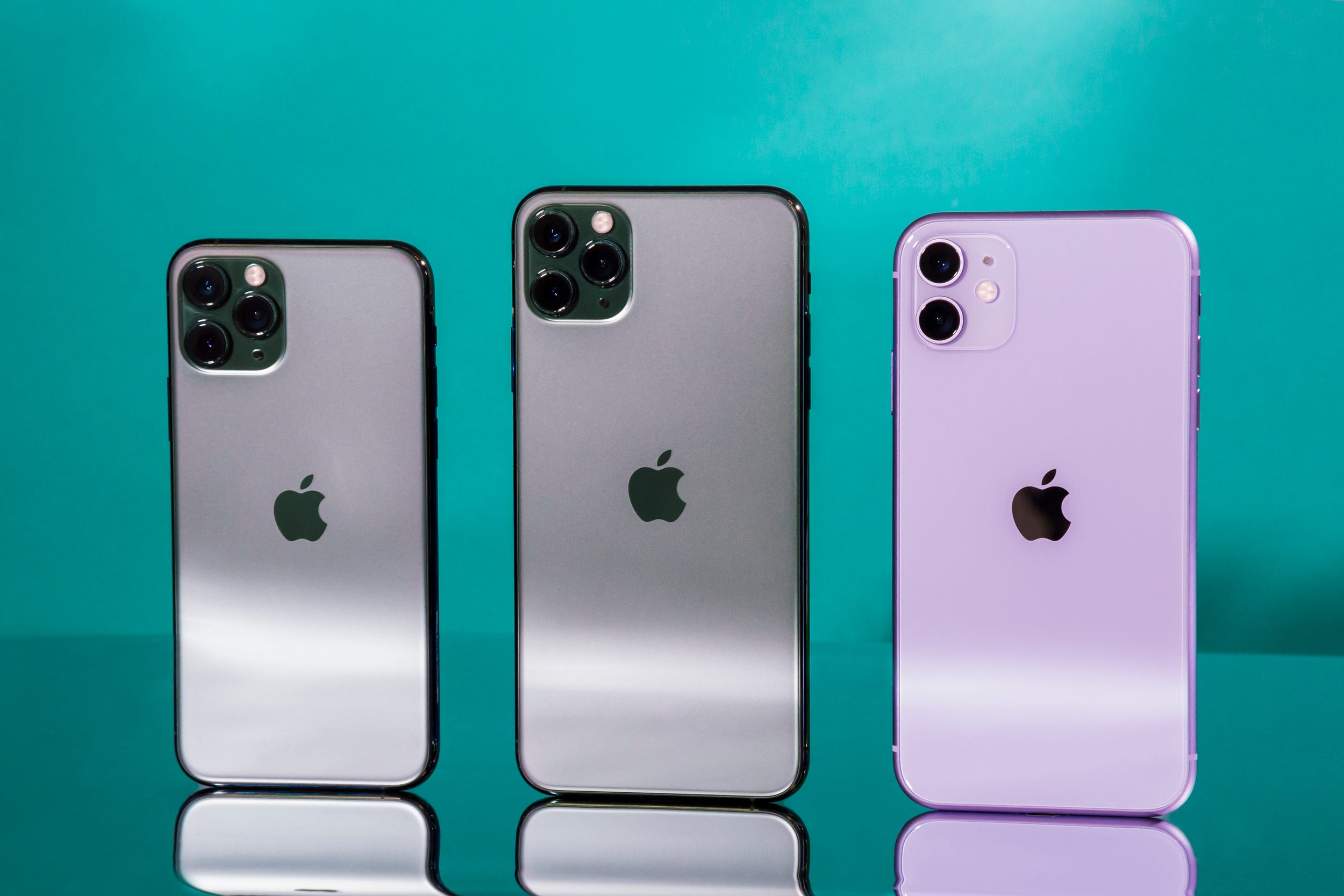 Apple’s iOS 14 update will feel like a dramatic change for iPhone owners â€” mostly because they will be able to change the home screen layout by adding widgets to it for the first time. Plus, Apple is launching a new way to use app features without installing a full app through App Clips â€” which as its name implies lets you use just a slice of an app when needed.

But aside from these larger changes, iOS 14 is also filled with features that bring small but appreciated improvements to the camera, Siri, Memoji, and much more.

The update launched on Wednesday and is compatible with the iPhone 6S and later, including both the original and new iPhone SE. Apple launched a beta preview of the software back in July.

Here are some of the best features you can expect when upgrading to iOS 14. 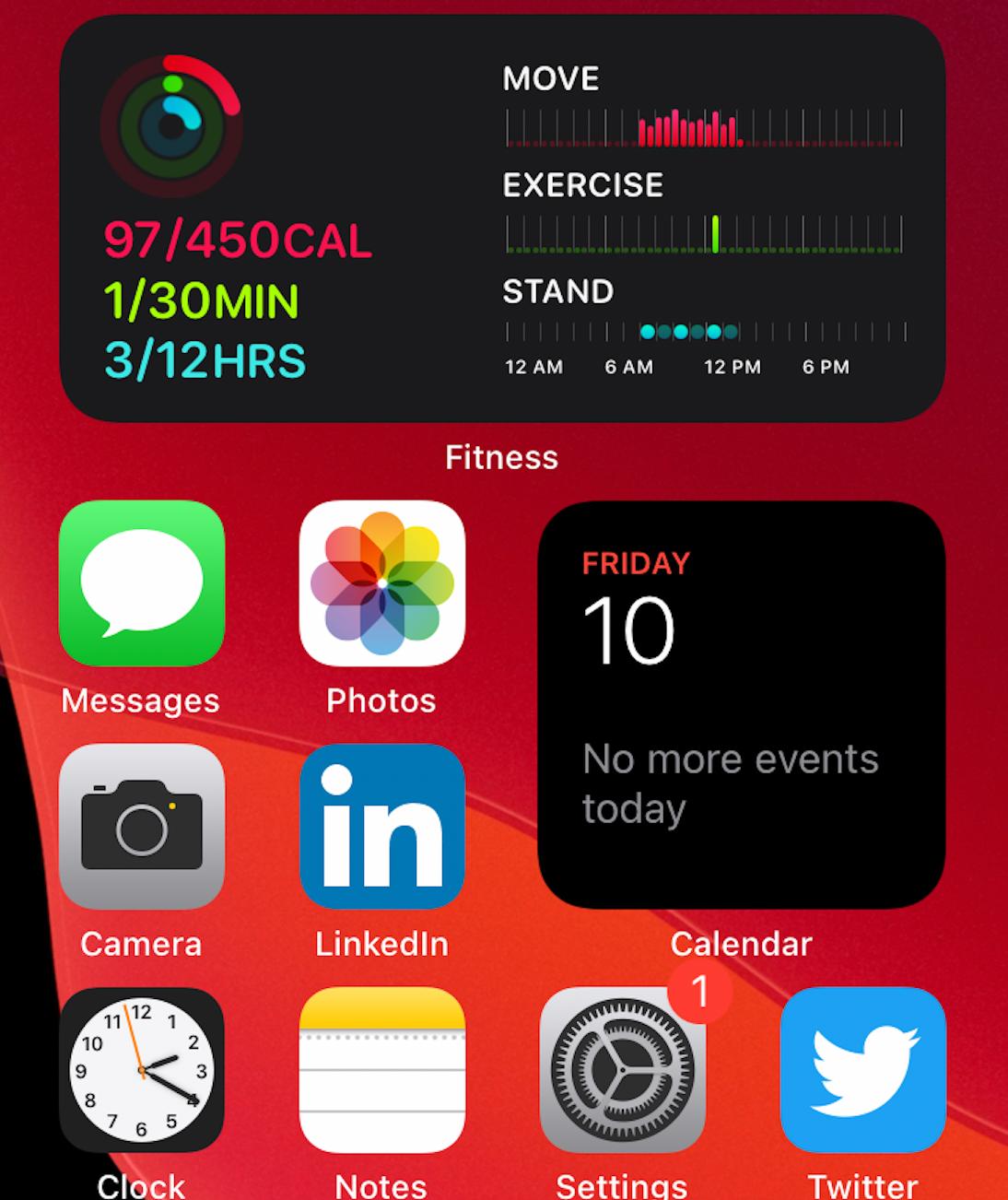 Apple is finally shaking up the home screen in iOS 14.

You can drag and drop widgets onto the main home screen, enabling you to see much more information at a glance, much like the experience Android has offered for years. Overall, this new option means your home screen can become much more than just a grid of your go-to apps.

You can add widgets for viewing photos from your image library, keeping track of your activity progress, and getting a glimpse at your next calendar event without having to tap into these apps.

If you can’t decide which widget to add to your home screen, you can also try the Smart Stack, which, as its name implies, piles multiple widgets on top of one another and rotates them throughout the day.

Widgets can also display more data than before and now come in multiple sizes.

You no longer have to sift through pages and pages of apps if you don’t want to. 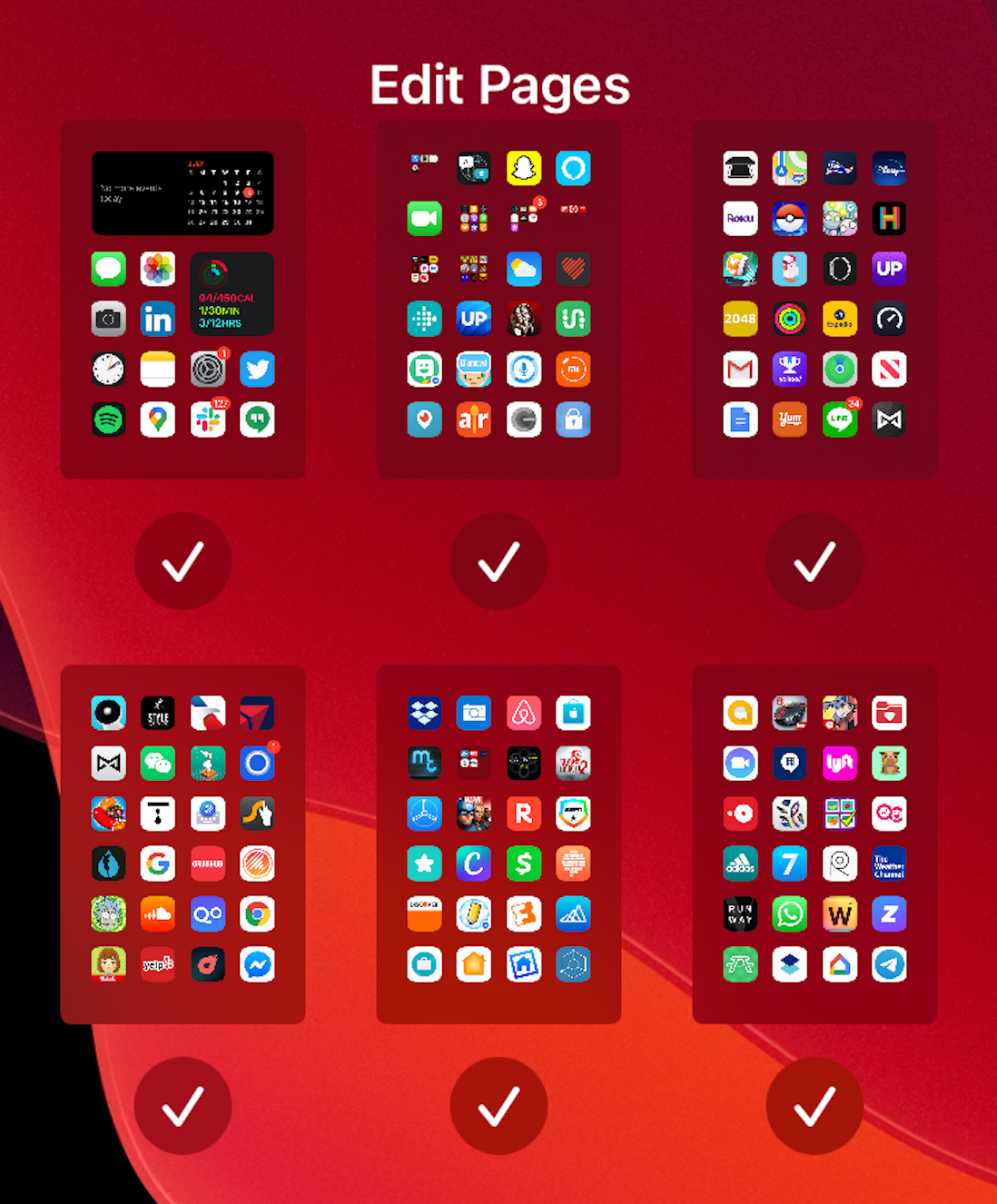 If your phone is a mess when it comes to app management, iOS 14 has a new feature that can help.

The App Library automatically sorts your apps into folders by category, such as genre (i.e. Creativity, Social, Entertainment) and by those you’ve recently added among other filters. You can also view a list of all the apps on your iPhone in alphabetical order.

To cut down on clutter, you can also choose to send newly downloaded apps right to the App Library instead of having them clog up your home screen.

I’ve also opted to hide all of my home screens except for the first two, another perk that comes with having the App Library.

You can finally pick your default web browser. 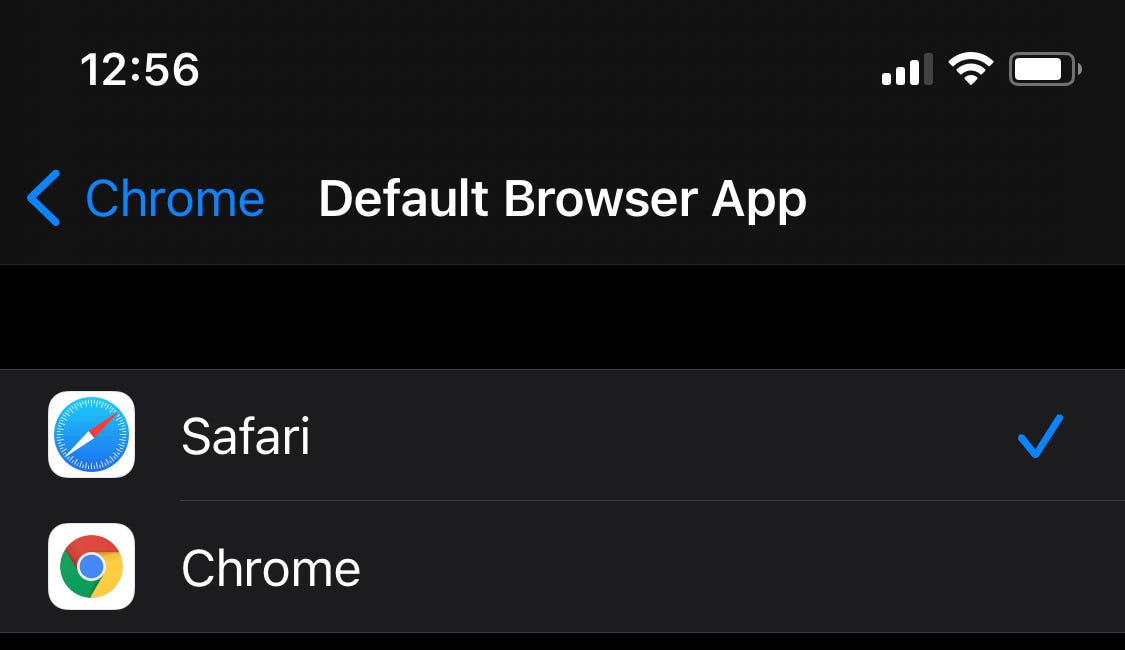 In iOS 14, you no longer have to use Apple’s Safari as your default web browser.

Just open the Settings menu, scroll down to the app you’d like to set as your new web browser, and press the default web browser button. 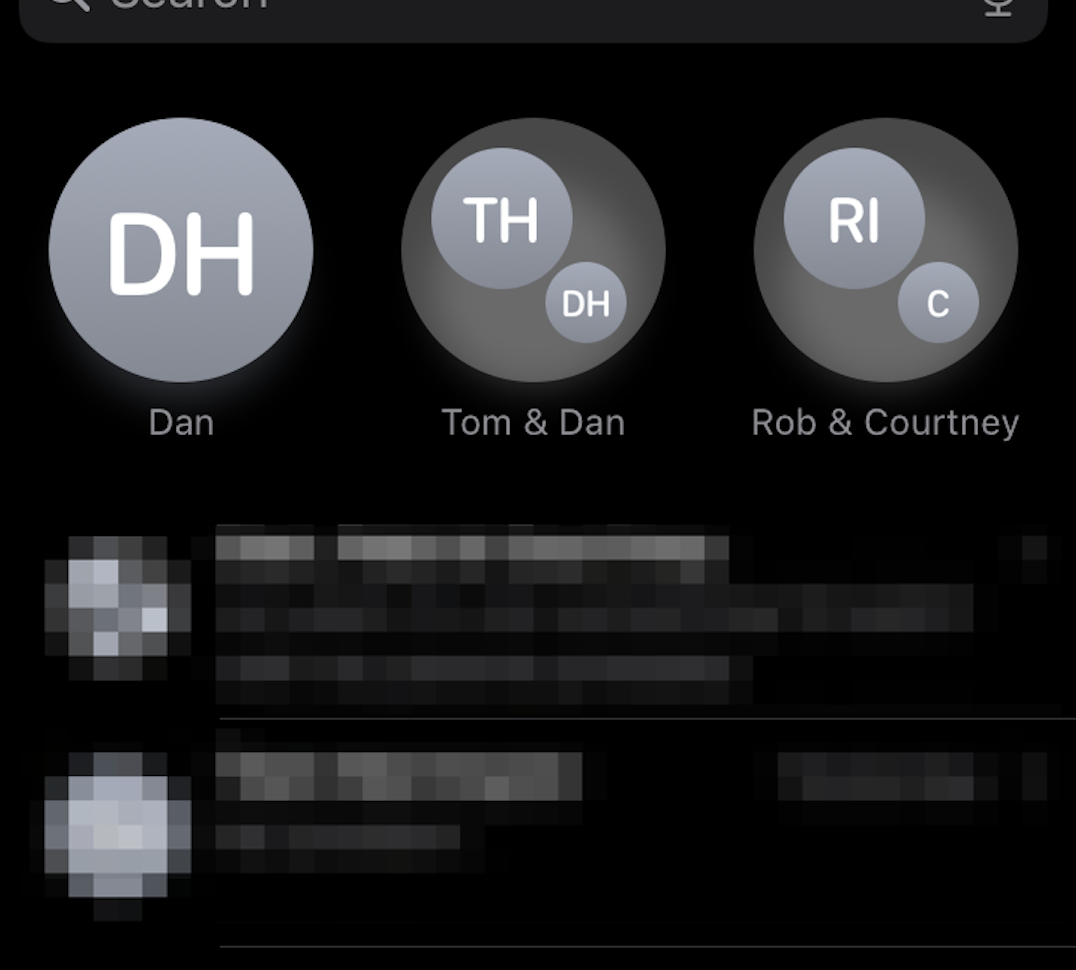 Apple’s iOS 14 update brings some useful enhancements to the Messages app, too.

You can pin important conversations to the top of the app so that you no longer have to dig through multiple threads. There’s also a new mentions feature for group conversations, which can trim down the number of notifications you receive from chats including multiple participants by only sending an alert when you’re mentioned. 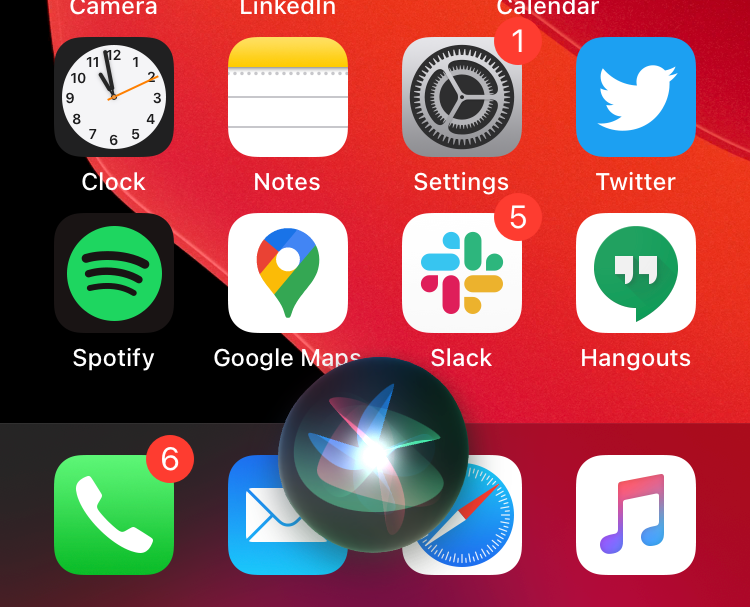 Siri is far less intrusive in iOS 14. Rather than occupying the entire screen when summoned, Siri now appears as a tiny glowing orb near the bottom of the screen, making it easier to ask a quick question without interrupting whatever you were previously doing on your phone.

And neither does an incoming phone call. 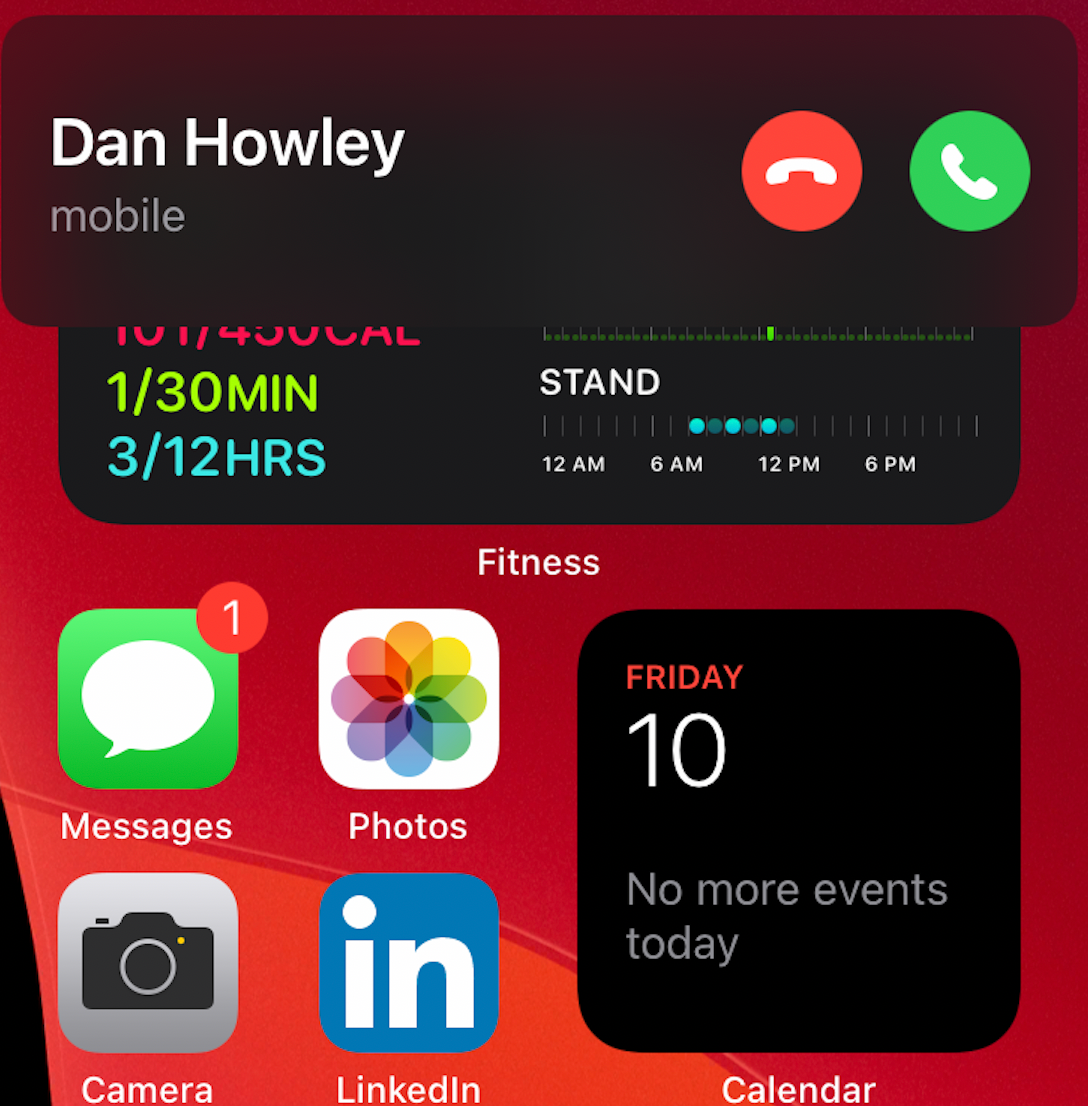 Phone calls are much less intrusive in iOS 14 since they no longer occupy the whole screen. Instead, they appear as a bar along the top of the display, similar to a banner notification. As such, you can continue to use your phone when receiving a call without disruption.

The iPhone can now tell me which apps I’m copy-and-pasting from.

Apple is also making it easier to make sure you’re copy-and-pasting the right content from your clipboard. When you paste text, you’ll see a small message near the top of the screen telling you which app you’ve pasted from.

More importantly, however, the feature could serve as a privacy measure for indicating when apps might be unknowingly accessing your iPhone’s clipboard. Reddit and LinkedIn were found to be doing just that and have since updated their apps to stop this practice.

There’s also a new feature that lets you control your phone without touching its screen. 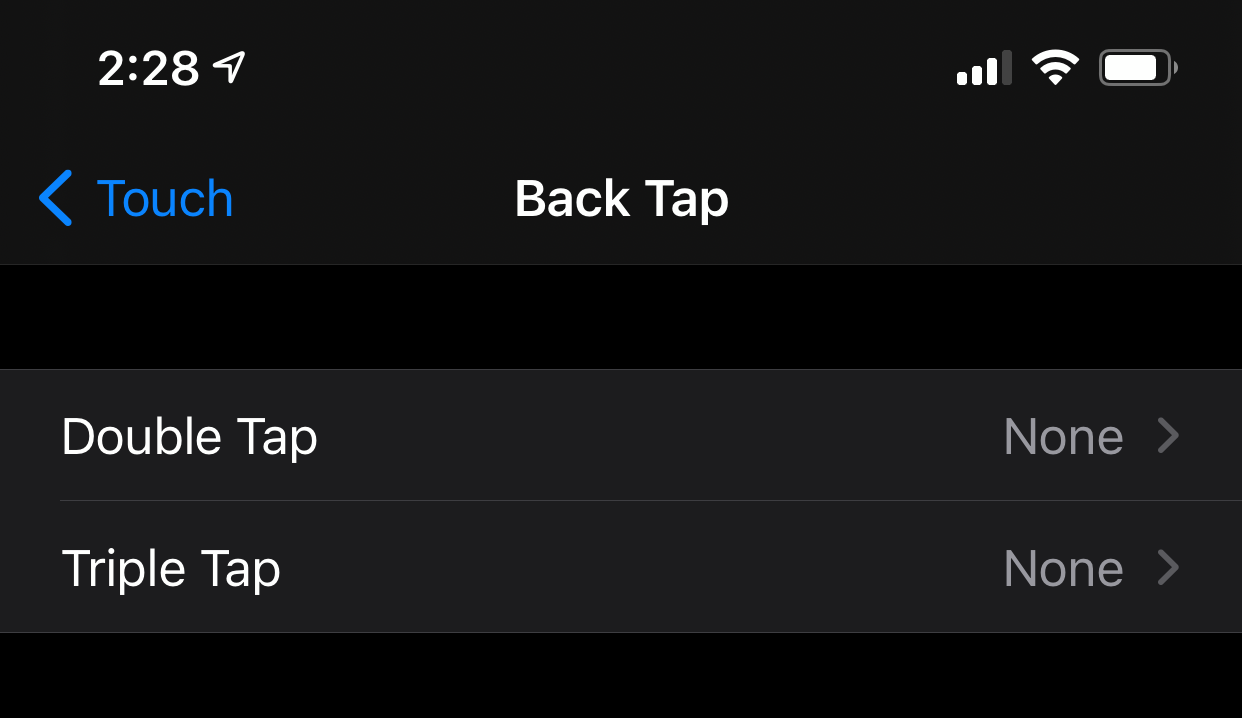 A new accessibility feature called Back Tap does exactly as its name implies; it allows you to control your phone with a double or triple tap on the back of the phone. With this feature, you can configure your iPhone to take a screenshot, adjust the volume, or launch Siri among other actions with just a couple of taps.

There are more Memoji sticker options to choose from and you can customise your Memoji with a mask. 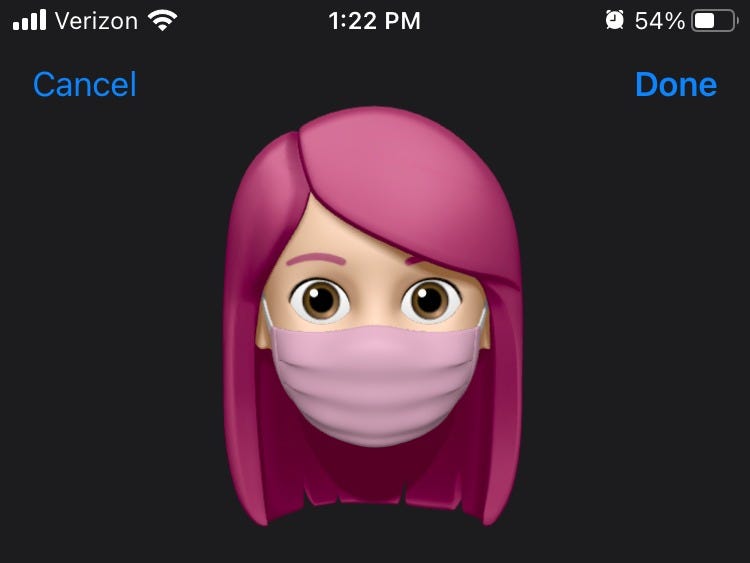 I only really use Memoji in sticker form, which is why I was particularly excited to see some new sticker options in iOS 14.

Memoji stickers are exactly what they sound like – emoji that are meant to look like you. Apple added Memoji sticker packs last year in iOS 13 and has now added more options in iOS 14, including a fist bump Memoji.

You can also customise your Memoji with new features like a face mask.

My iPhone can tell me if the doorbell is ringing or if my cat is meowing. 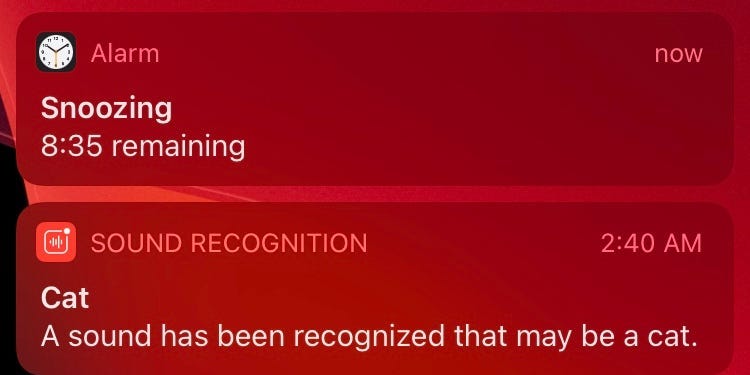 Apple is also adding some new accessibility features in iOS 14, one of which being the ability to set up Sound Recognition.

This feature enables your iPhone to listen up for certain sounds, such as shouting, police sirens, pets, and water running so that it can alert you accordingly. Although it’s an accessibility-oriented feature, I could imagine it being useful during instances in which I may not hear the doorbell – such as when I’m wearing noise cancelling headphones.

I’ve noticed it working well in practice so far; as shown in the screenshot above, I received a notification telling me that my cat may have been trying to get my attention in the middle of the night.

It’s also gotten better at reminding me when it’s time to go to bed. 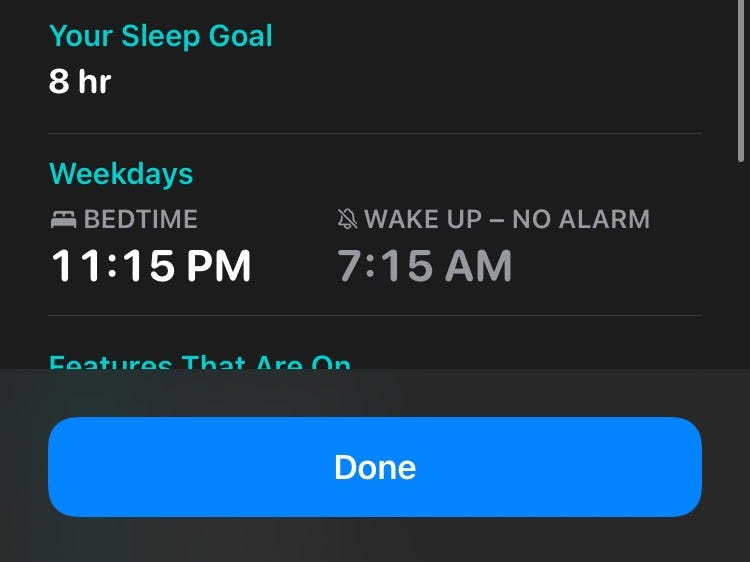 Apple has offered a Bedtime mode for years that dims the display and hides notifications on the lock screen until the morning. With iOS 14, however, Apple has folded this into the Sleep section of Health app and added more controls for managing a sleep schedule and setting goals.

I have mine set to kick into bedtime mode 45 minutes before my scheduled sleep time, which prompts my iPhone to dim the lock screen and displays a nice message wishing me a restful sleep.

Recording indicators show when the microphone or camera is being used. 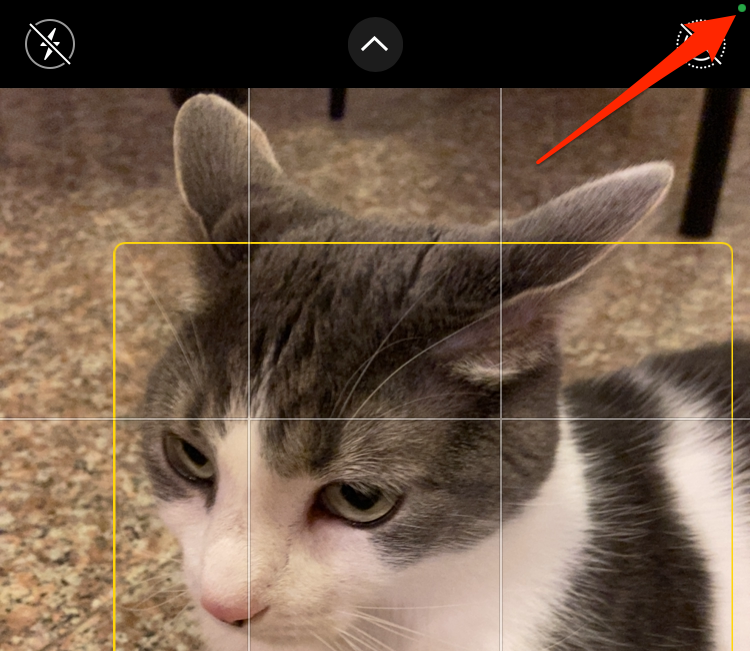 Lisa Eadicicco/Business InsiderThat tiny, green dot is an indicator showing the camera is being used.

Selfies now can look like your mirror image instead of being flipped. 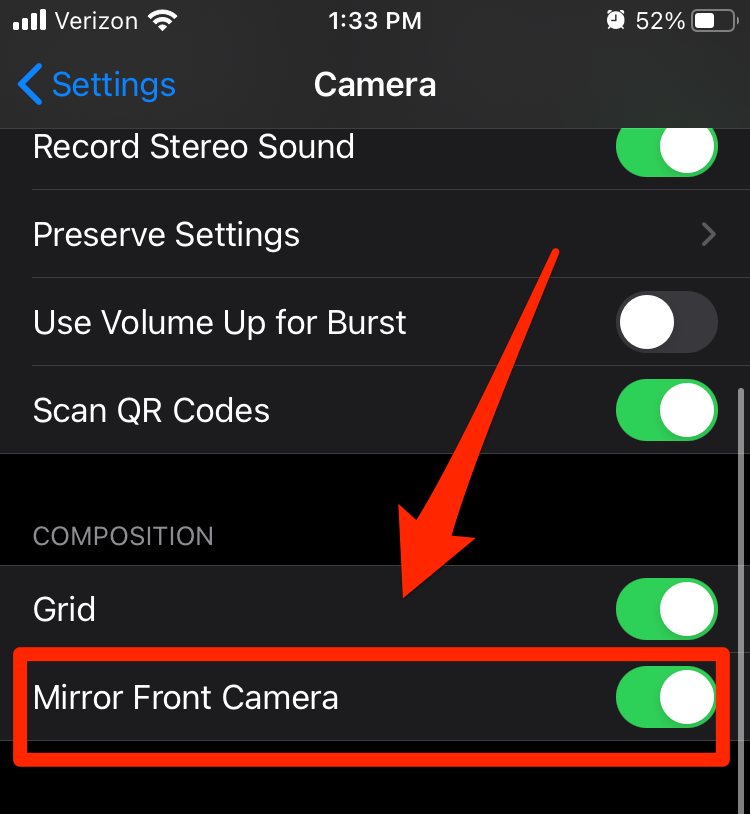 You may notice when taking a selfie that the result doesn’t look quite the way it appeared in your iPhone’s viewfinder. That’s changing in iOS 14, as there’s a new setting that enables your iPhone to snap a selfie that looks like your mirror image.

It’s much easier to set alarms. 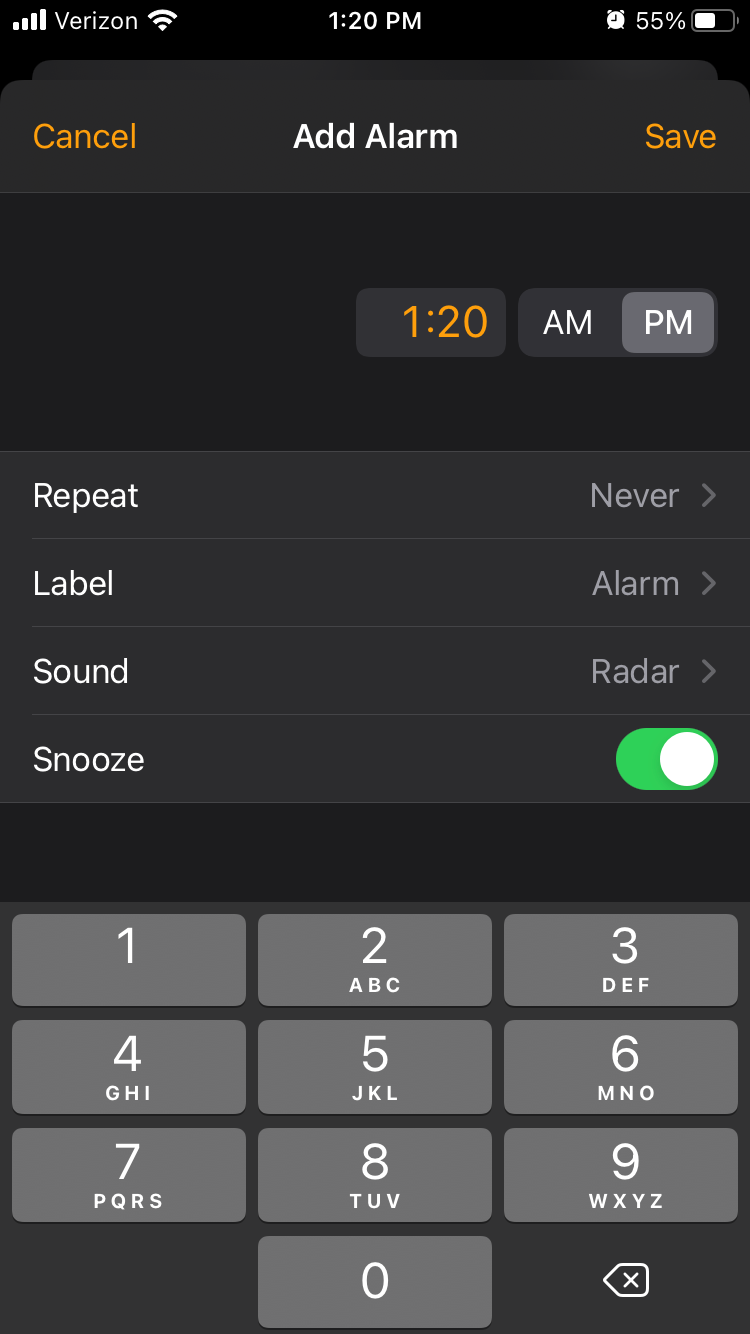 If you set dozens of alarms like I do, you’re probably very familiar with the process of scrolling through the number picker to set the minute and hour.

Thankfully, Apple is moving to a more convenient method for setting alarms in iOS 14. Rather than requiring you to scroll to find the right number, your iPhone will just pull up the number pad so that you can type it in.