Someone built an inter-dimensional portal using Apple's new AR software, and it's a very good effect

We’ve seen developers do some really cool things with ARKit, Apple’s new augmented-reality development software, ever since the toolkit was announced and released in early June. But this new example just might be the best one yet.

This could be the kind of thing you’ll soon see regularly now iOS 11 and the new iPhones are on the table.

In the clip below, which was shot with an iPhone, the camera superimposes a virtual door that leads into a virtual jungle on top of the real world. The door stays in place as the camera moves around.

When you step through the portal, you can see the real world through that same doorway. It's a very good effect. Here's the full video. 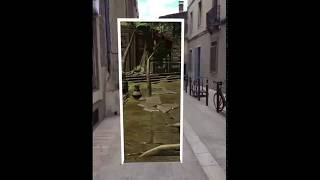 This kind of augmented-reality technology will be coming to iPhones and iPads this fall through the iOS 11 update, but recent reports suggest Apple also plans to implement this technology into a pair of smart eye glasses, to be released within the next year or two.

'We're building it into iOS 11, opening it to ­developers -- and unleashing the creativity of millions of people. Even we can't predict what's going to come out,' Cook said. 'I am so excited about it, I just want to yell out and scream.'