ReutersThe Apple Inc. logo is seen hanging at the entrance to the Apple store on 5th Avenue in New York

Apple’s stock price has ballooned so much in recent weeks that it is on track to be worth more than the entirety of the UK’s benchmark share index, the FTSE 100.

On Wednesday, Apple closed at $US467.18 per share, crossing the $US2 trillion market capitalisation milestone in the process.

By comparison, the UK’s FTSE 100, which comprises the 100 biggest UK-listed companies by market cap, is worth $US2.16 trillion according to Bloomberg data, meaning Apple is bracing to soon be bigger than the entire index.

Apple’s market cap is $US2.02 trillion as of 10 a.m. ET Friday, meaning it would need to gain around 6.9% to surpass the FTSE’s valuation.

MORGAN STANLEY: Buy these 22 stocks that are slashing costs as sales take a hit from COVID-19 – putting them in position to smash the market as the economic recovery continues

Apple’s stock price since the start of the year 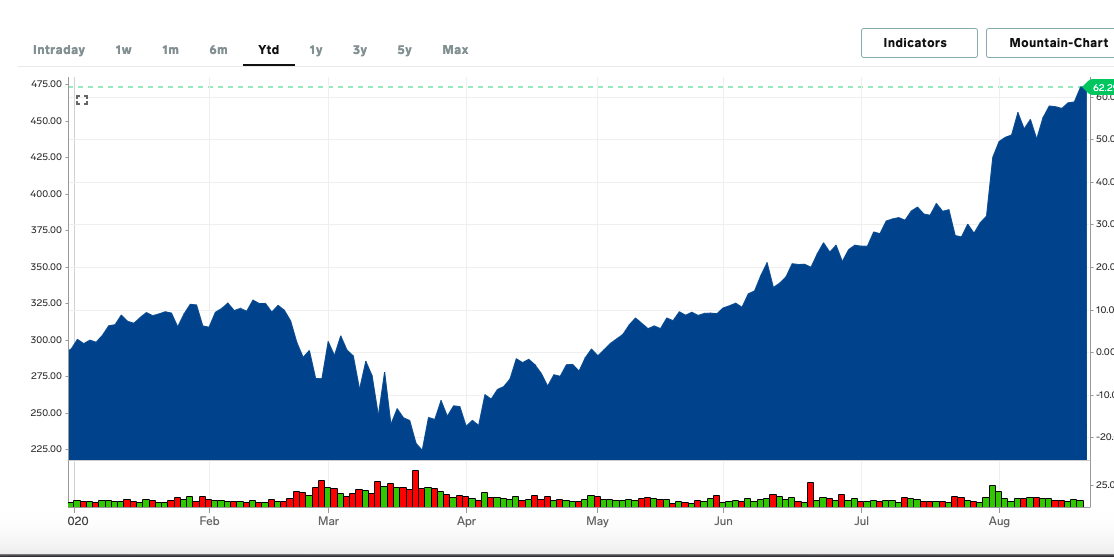 Apple’s stock market growth comes amid massive stimulus by the Federal Reserve, expectations of a COVID-19 vaccine, and investor optimism on the type of economic recovery that awaits the US post-COVID-19.

Apple has broken significant market-cap milestones in the past. It was also the first US company to reach a market value of $US1 trillion back in August 2018.

Saudi owned oil giant Saudi Aramco is the only other company to have achieved the $US2 trillion valuation, reaching that milestone in December last year, just one day after its initial public offering.

Investors have flocked to technology stocks such as Apple,Tesla, and Amazon during the pandemic, pinning their hopes on these stocks surviving the economic shock of the virus better than the rest of the market.