Fifty-one years ago, on July 20, 1969, astronauts Neil Armstrong and Buzz Aldrin stepped off a tiny, rickety spacecraft and onto the surface of the moon.

Apollo 11 was the ninth endeavour in the 14-mission Apollo moonshot program, and it was arguably NASA’s most dangerous and ambitious mission ever.

Although the world watched Armstrong and Aldrin walk on the lunar surface on live TV, many surprising – and some terrifying – moments from the Apollo 11 mission only came to light after the crew returned to Earth. Here are some of the wildest anecdotes from the Apollo program that you probably never learned in school.

The first moon meal was bacon and coffee. But mostly, the Apollo astronauts ate a lot of dehydrated beef and vegetables. 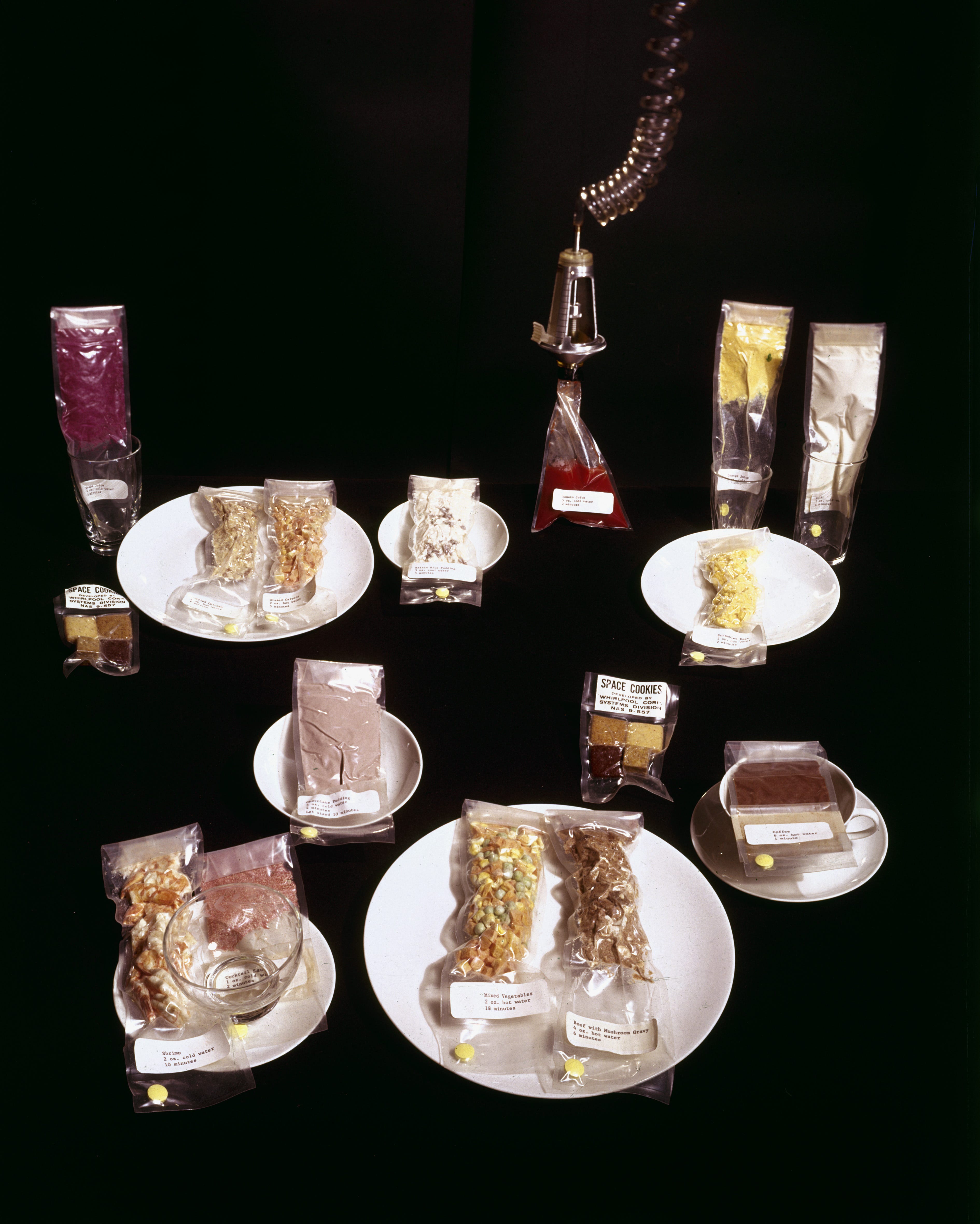 The Apollo 11 astronauts were the first to have hot water in space and to eat their food with a spoon instead of squeezing it out of a bag. The meals were colour-coded, individually wrapped, and labelled for each day.

The Apollo astronauts had no bathroom. Instead, they used bags and roll-on cuffs. 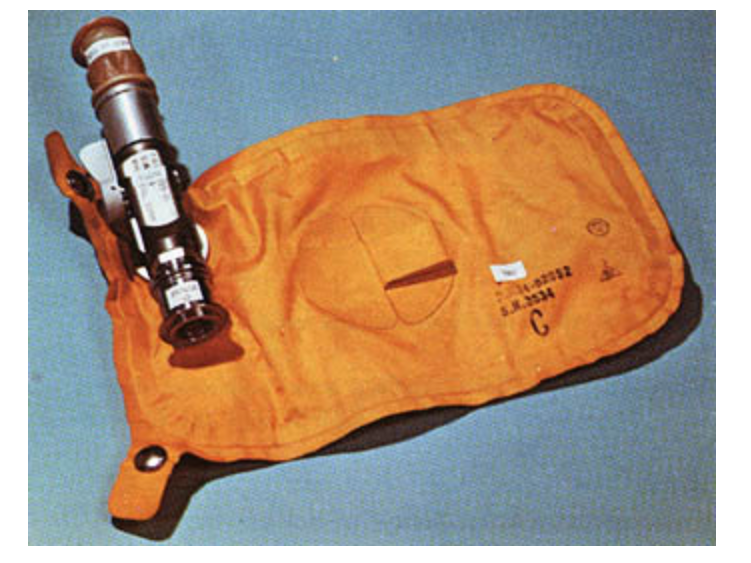 NASAOn the Apollo missions, astronauts peed into a cuff that emptied into this bag.

Condom-like cuffs allowed the Apollo astronauts to pee into a bag. (These were designed only for men, of course.) To poop, they used a different rudimentary plastic bag system. The whole process could take up to 45 minutes.

“Defecation and urination have been bothersome aspects of space travel from the beginning of manned space flight,” an official NASA report on the Apollo space missions reads.

When walking on the moon, Aldrin and Armstrong wore diapers.

Buzz Aldrin has boasted about being the first person to “piss his pants on the moon.” 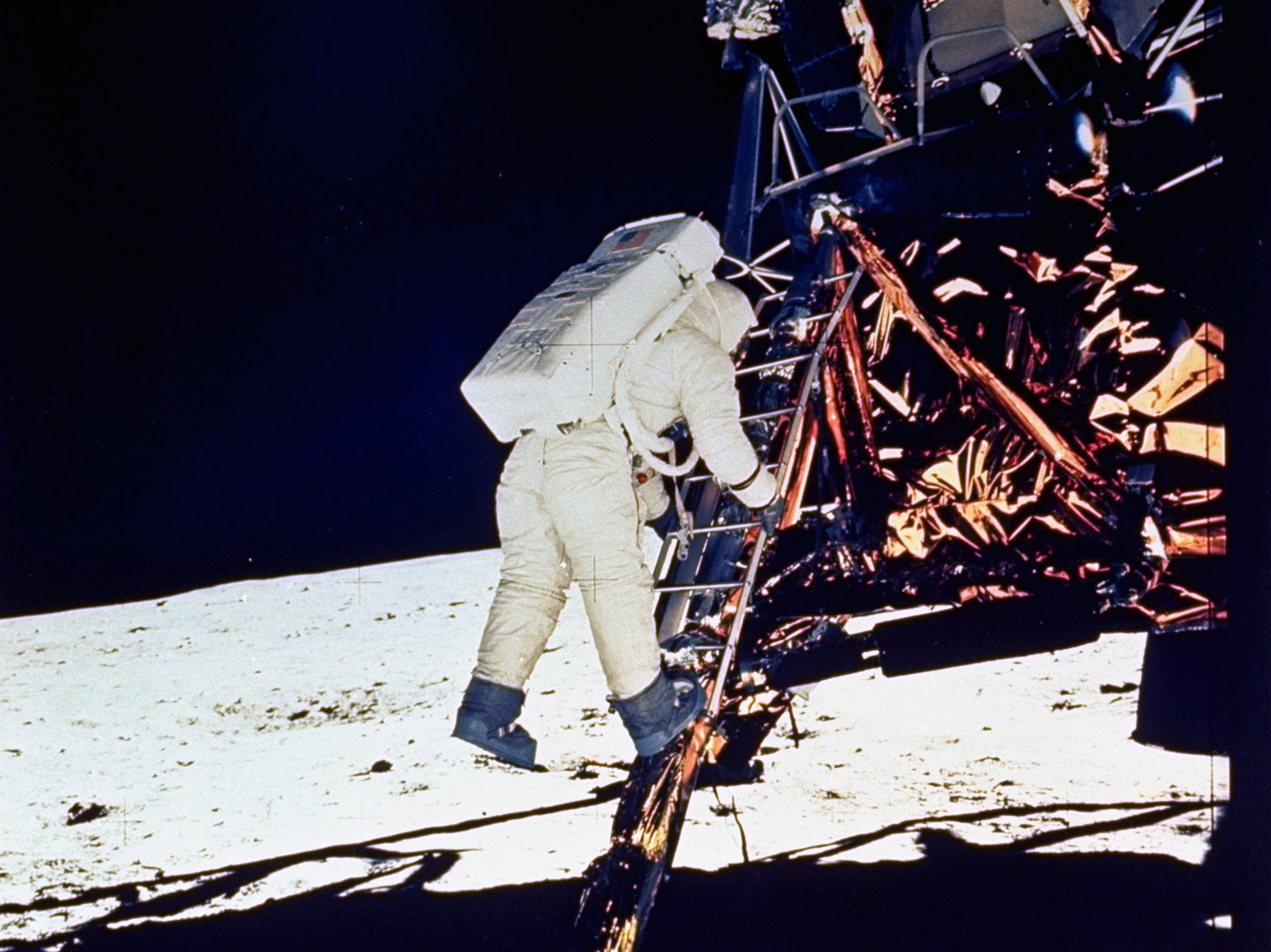 “It’s lonely as hell out there,” he told a crowd at the Newseum on the 40th anniversary of the moon landing. “I peed in my pants.”

Of course, he was wearing a diaper.

The Saturn V rocket that launched the Apollo 11 astronauts into space is still the tallest, heaviest, and most powerful rocket ever flown. 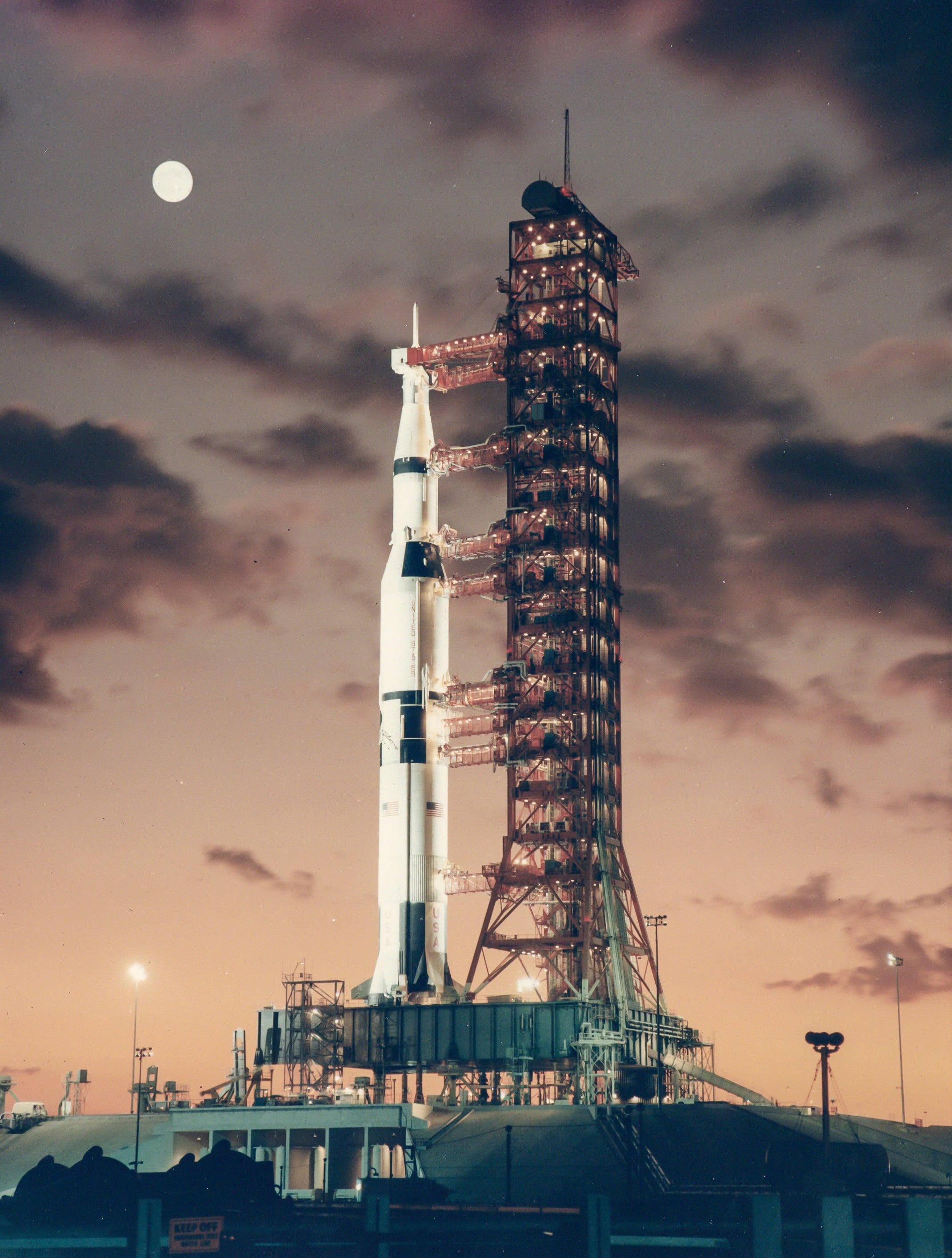 A total of 13 Saturn V rockets launched 27 astronauts into space, as well as the US’ first space station, Skylab. Each rocket was 363 feet tall and weighed 6.2 million pounds.

It took 7.5 million pounds of thrust to get Armstrong, Aldrin, and Michael Collins (the Apollo 11 pilot who stayed in lunar orbit) off of Earth.

A few days before the rocket launched the Apollo 11 crew into space, about 500 people protested the moonshot program outside the Kennedy Space Centre.

Bettmann/Getty ImagesReverend Ralph Abernathy stands on steps of a mockup of the lunar module displaying a protest sign while demonstrating at the Apollo 11 moon launch.

The protesters were part of sizeable chunk of Americans that thought the Apollo missions’ $US24.5 billion budget should go toward improving life for people on Earth instead of sending men to the moon.

In a Harris poll six months before Apollo 11, only 39% of Americans supported the efforts to put someone on the moon. In the same poll, just under 41% of Americans said they would choose to cut funding to the space program above any other government activities. (For comparison, 18% of people wanted to cut Vietnam War funding.)

The DC protest was led by Reverend Ralph Abernathy, one of Martin Luther King, Jr.’s closest aides, according to History.com. They brought mules and a wooden wagon to juxtapose images of poverty with the gleam of the Saturn V rocket.

Musician Gil Scott-Heron even wrote a song opposing the moon mission, called “Whitey On The Moon.” 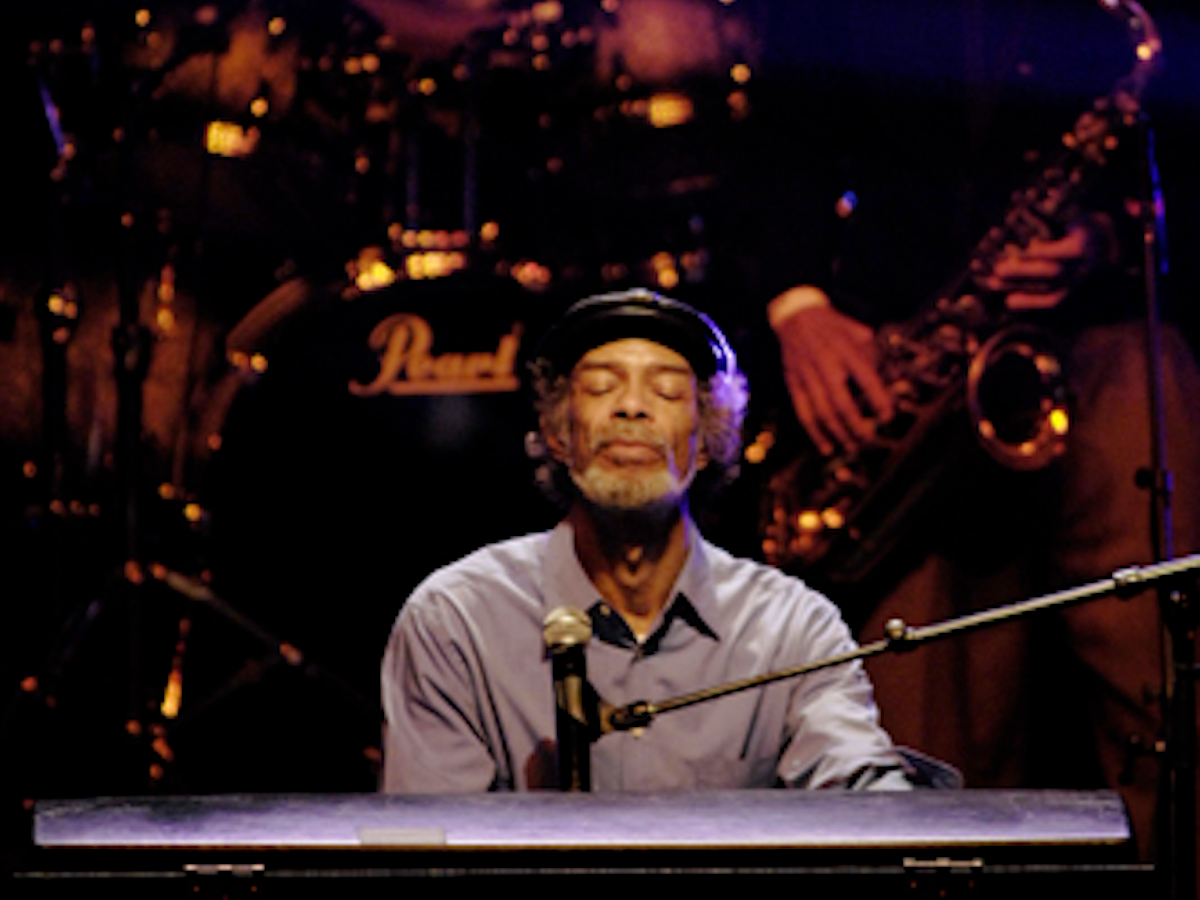 “Was all that money I made las’ year, for Whitey on the moon?” The lyrics ask. “How come there ain’t no money here? Hm! Whitey’s on the moon.”

Armstrong had to manually steer the landing module, called “Eagle,” to an impromptu landing site. They touched down with 45 seconds’ worth of fuel left in the landing tank. 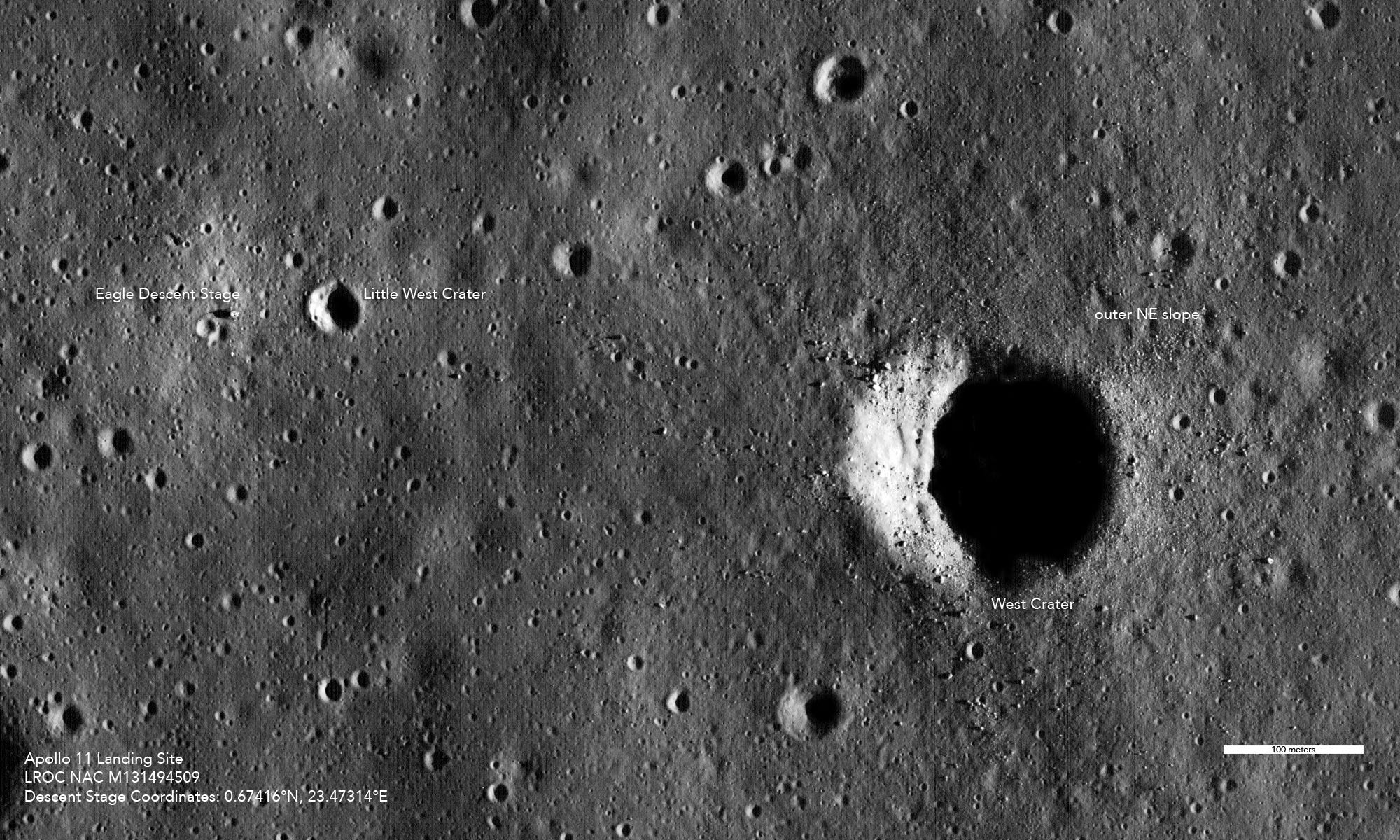 NASAThe landing point on the northeastern flank of the moon’s West Crater seemed too rocky to Armstrong, so he steered the Lunar Module to the safer Little West Crater.

Once Armstrong and Aldrin were approaching the moon’s surface, they realised that the Eagle had overshot its intended landing point by 4 miles. The spot the astronauts were headed for, on the moon’s West Crater, turned out to be covered in boulders.

Aldrin’s window did not allow him to see the rocky terrain that Armstrong saw. So Armstrong switched into manual mode and flew 500 meters to smoother ground at what became known as the Little West Crater.

At the same time, a computer system in the Eagle malfunctioned, showing an error code that the astronauts didn’t recognise, and five alarms blared. Armstrong ignored it as he coasted to a landing.

He later said this was the hardest part of the mission.

If the astronauts had followed spacewalk tradition, Aldrin would have been the first man on the moon, not Armstrong. NASA via Getty ImagesAstronaut Neil Armstrong smiles inside the Lunar Module on July 20, 1969.

In previous spacewalks, the more junior crew member would venture out first, leaving the commander at the controls in case of an emergency. Following that model would have meant Aldrin left the module before Armstrong.

But in a Reddit AMA in 2014, Aldrin wrote that NASA chose Armstrong to go first for the symbolic value.

“Many people felt the great symbology of the commander [taking that responsibility],” he said.

NASA tells a different story: The lunar module’s design made it difficult for Aldrin to get out first, according to the agency.

While Armstrong and Aldrin were on the moon, Collins stayed in orbit to helm the command module.

The veteran astronaut had over 4,200 hours of flight experience as a fighter pilot and had previously piloted NASA’s Gemini 10 mission.

“I was the most lonesome person in the whole universe, at least according to the newspapers,” Collins joked at an Apollo panel held by NASA. “Actually, I was so glad to get behind the moon so Mission Control would shut up.”

The moon’s mass would block communications, which was when Collins got time to relax.

“Then I had some peace and quiet,” he said.

Aldrin and Armstrong stayed on the lunar surface for 21 hours and 36 minutes, though they spent most of that time inside the lunar module.

NASABuzz Aldrin walks on the moon.

The astronauts stepped onto the moon about 4.5 hours after touching down.

They collected samples, took pictures and video, planted an American flag and a plaque, set up a couple of experiments, and took a call from the White House.

After about 2.5 hours on the surface, they climbed back into the lunar module for some much-needed sleep.

To link back up with Collins in orbit, Aldrin and Armstrong had to launch back off the moon in the lunar module. If something went wrong, they’d be stranded in space and left for dead. 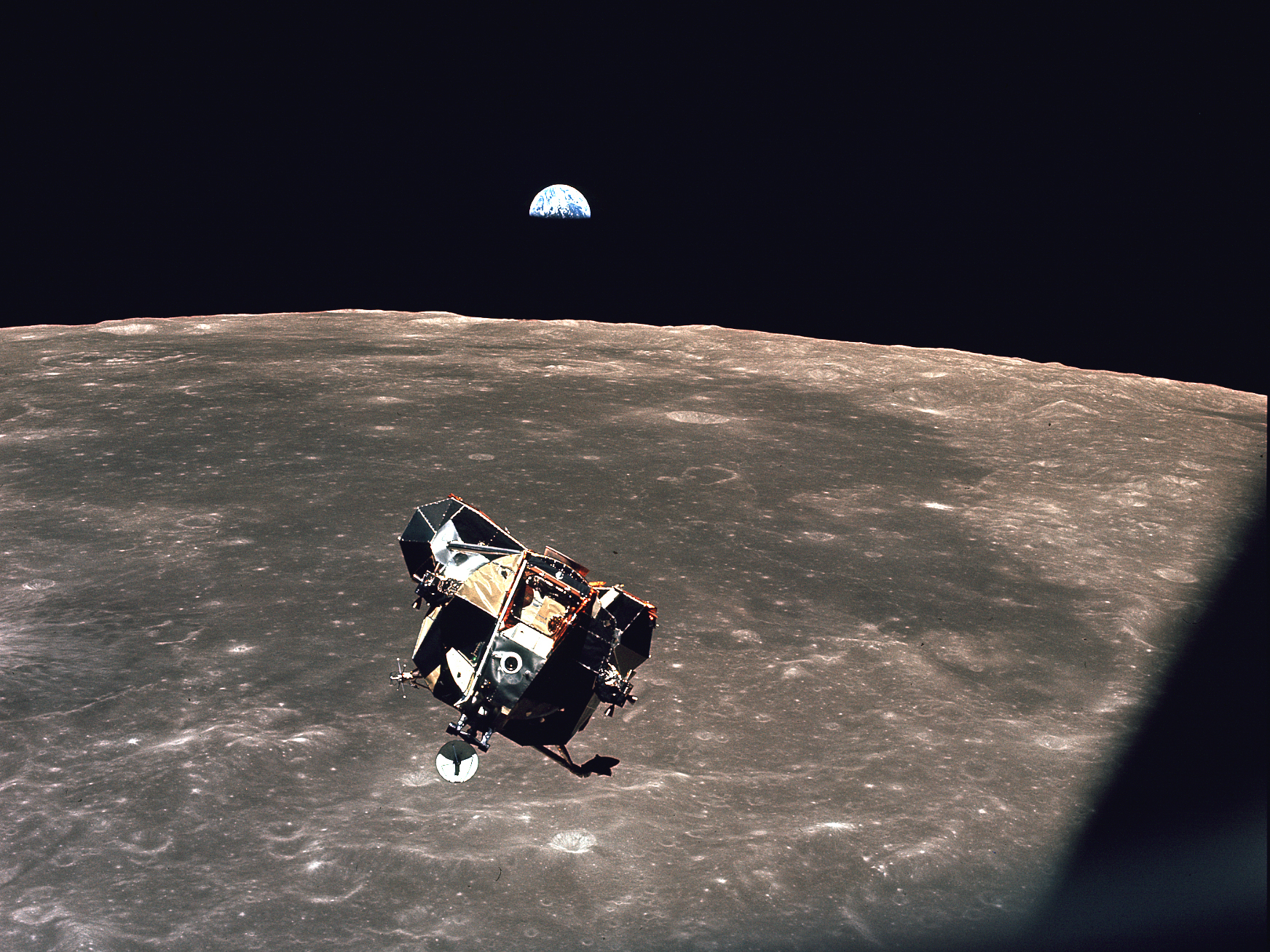 “Mission Control would then have to – to use their euphemism – ‘close down communication,’ and the men would have to either starve to death or commit suicide,” William Safire, President Richard Nixon’s speechwriter at the time, told NBC in 1999.

“If they couldn’t [launch], and there was a good risk that they couldn’t, then they would have to be abandoned on the moon, left to die there,” Safire said.

This scary situation almost came to pass: Before lift-off, Aldrin discovered that a crucial circuit breaker had broken. 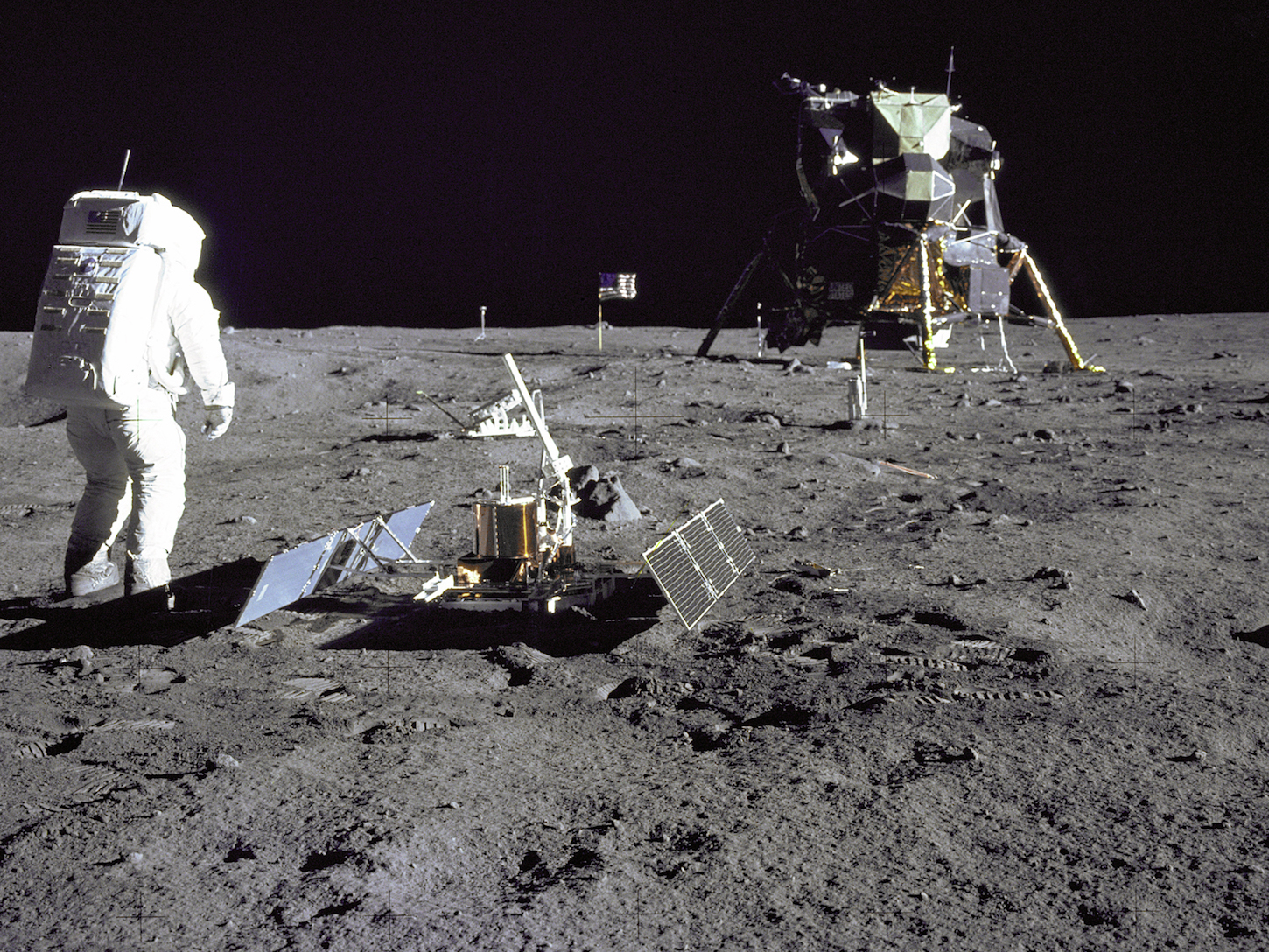 NASABuzz Aldrin works to set up science experiments on the moon.

“I laid down on the floor with my head to the right, which is the co-pilot’s side, and I’m looking around at the dust that came in, and there’s this little black object. Didn’t look like it belonged there. Looked a little closer … this was a circuit breaker that was broken,” Aldrin said at a recent event, according to Space.com.

Flipping the breaker was essential to getting back in orbit. Without it, they couldn’t leave the lunar surface.

Ultimately, Aldrin used a pen to push in the button. That improvised solution allowed the astronauts to leave the moon and safely rejoin Collins.

President Nixon had a speech ready in case the astronauts died. 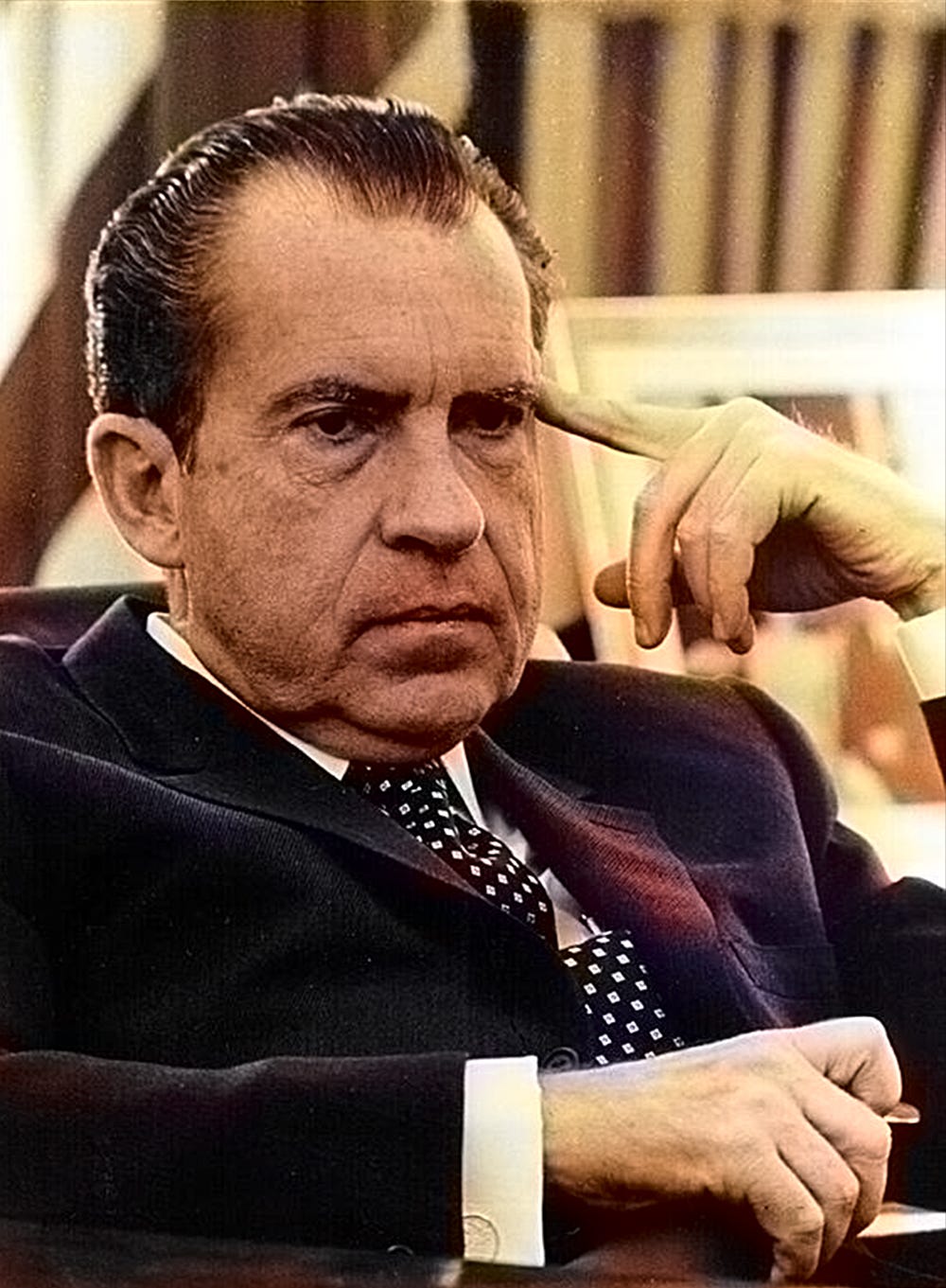 The backup speech, titled “In Event of Moon Disaster,” was released 30 years later.

“Fate has ordained that the men who went to the moon to explore in peace will stay on the moon to rest in peace,” the speech began.

Less than an hour before the Apollo 11 crew landed in the Pacific Ocean, they faced another unexpected threat: A discarded module didn’t jettison away as it was supposed to. 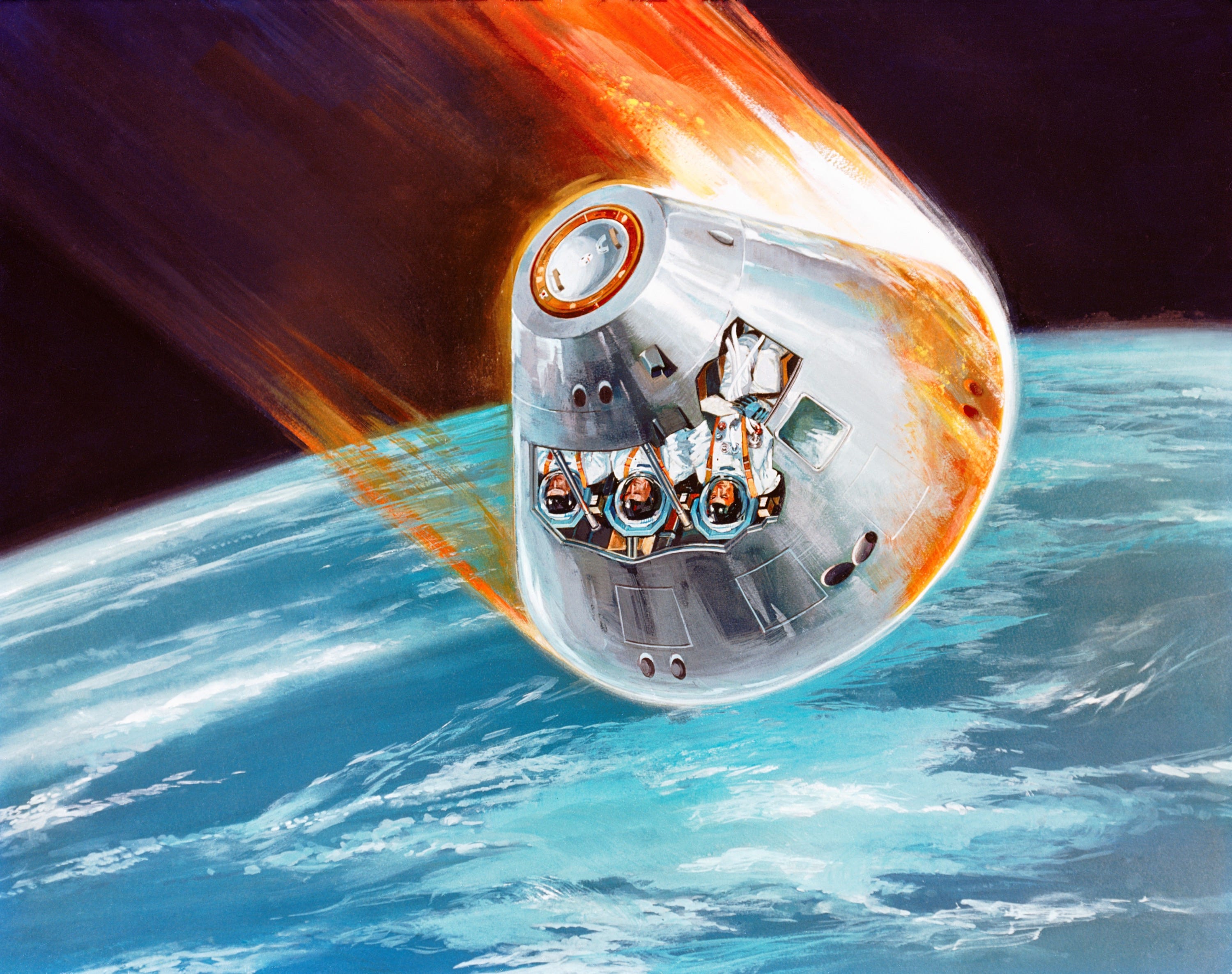 NASAA 1968 artist’s concept of an Apollo command module returning to Earth after a voyage to the moon. Plasma is created ahead of a spacecraft’s heat shield as it rams through the planet’s atmosphere.

Instead, it chased the vehicle carrying the astronauts and could have crashed into them.

A book by science journalist Nancy Atkinson describes the incident.

“The event was discovered only after the crew had returned safely to Earth,”Atkinson previously told Business Insider.

The same issue threatened the crews of three other Apollo missions.

After the Apollo 11 astronauts were safely back on Earth, NASA quarantined them for 21 days in case they’d brought back moon germs. 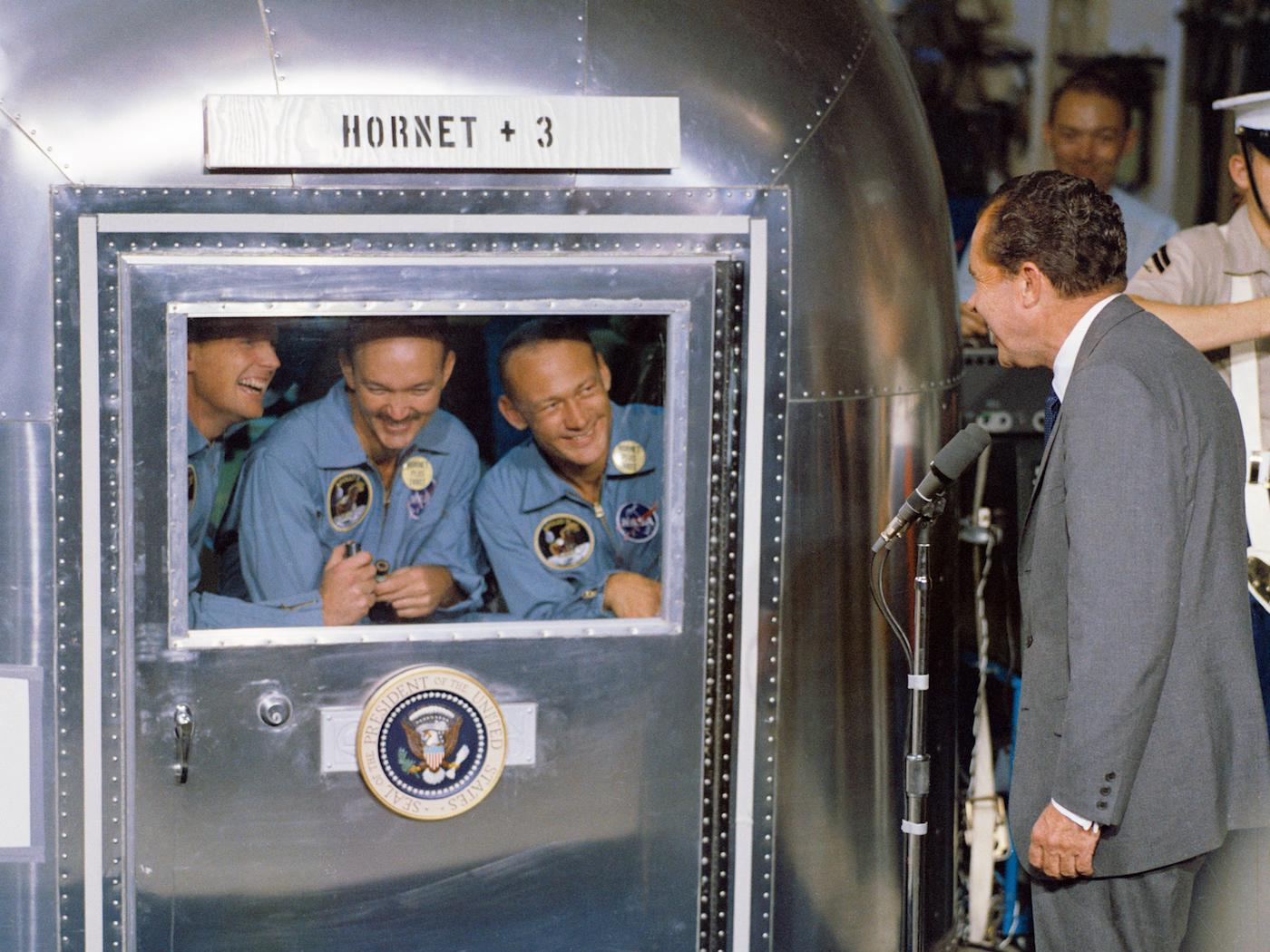 NASAPresident Nixon welcomes the Apollo 11 astronauts aboard the USS Hornet, the recovery ship for the mission.

The crew spent the first 88 hours in what NASA describes as “essentially a highly-modified 35-foot Airstream trailer,” with a lounge, galley, sleeping quarters, bathroom, and a microwave.

Then they moved on to a larger quarantine area, where Armstrong celebrated his 39th birthday on August 5, 1969.

The crew had to sign customs forms declaring “moon rock and moon dust samples” upon their return to the US. 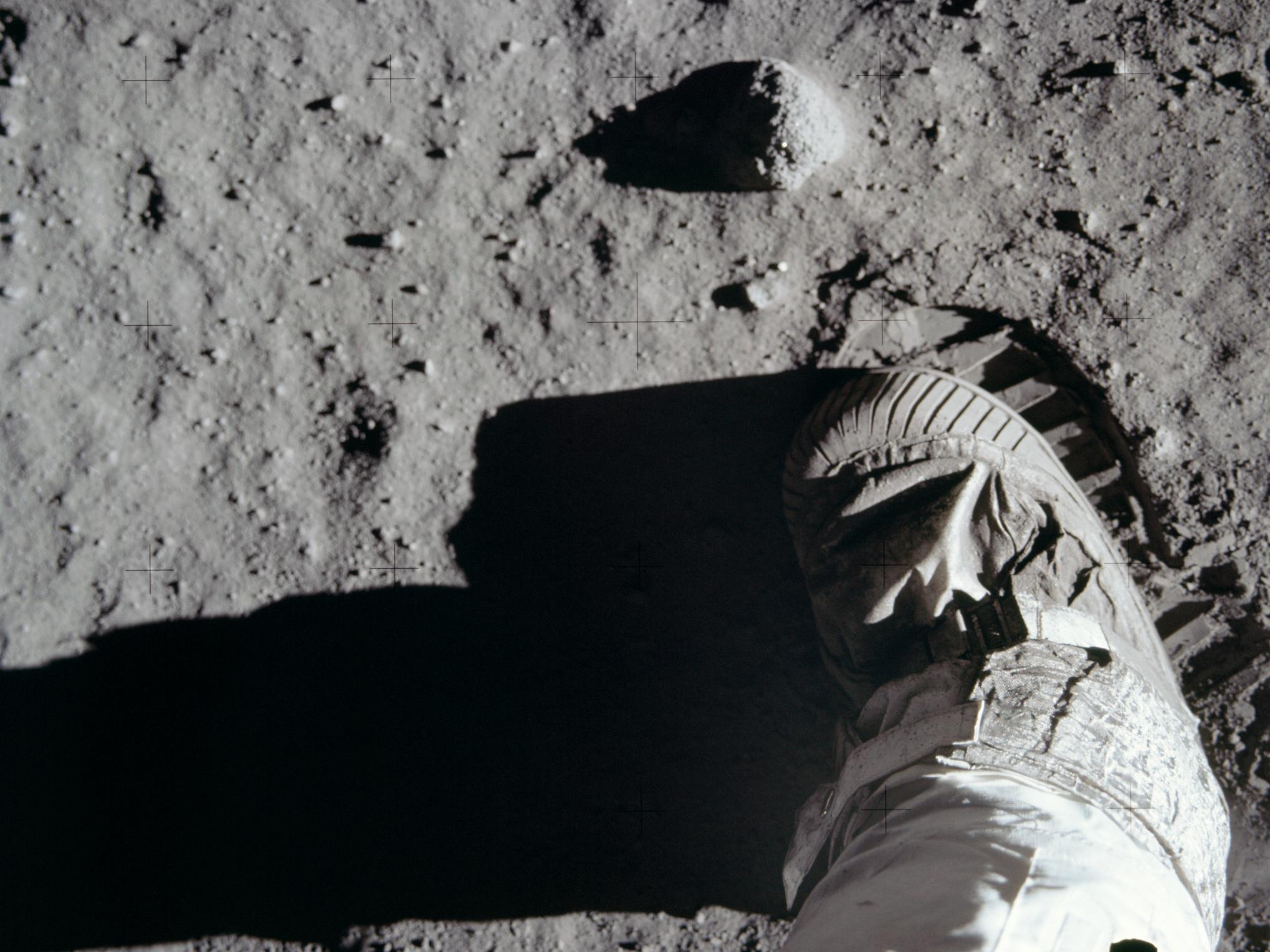 Aldrin tweeted a picture of the form in 2015, pointing out a field that asked about risks of disease spread. The response: “To be determined.”

Buzz Aldrin submitted $US33.31 in travel expenses for reimbursement. 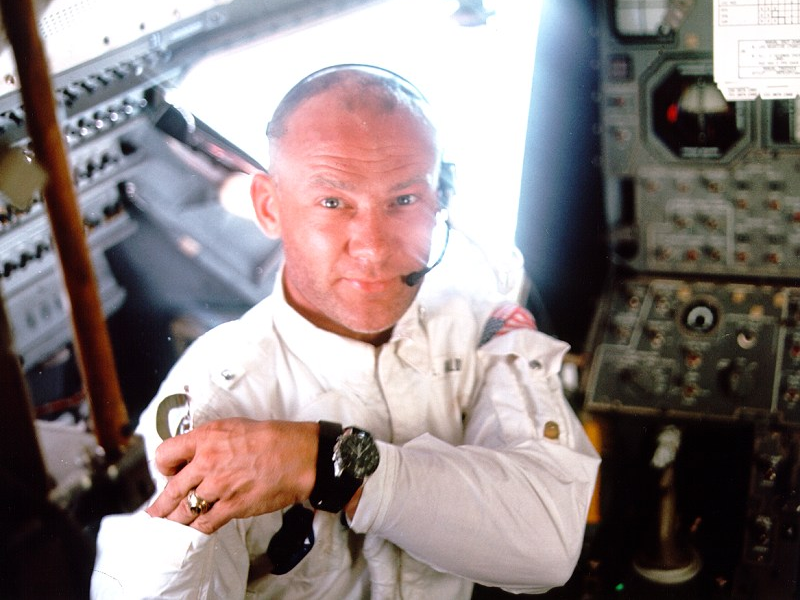 That would be about $US231 in today’s dollars.

Aldrin tweeted pictures of his travel voucher in 2015.

NASA used the Apollo Mission Control Centre until 1992, through all 21 space shuttle missions. 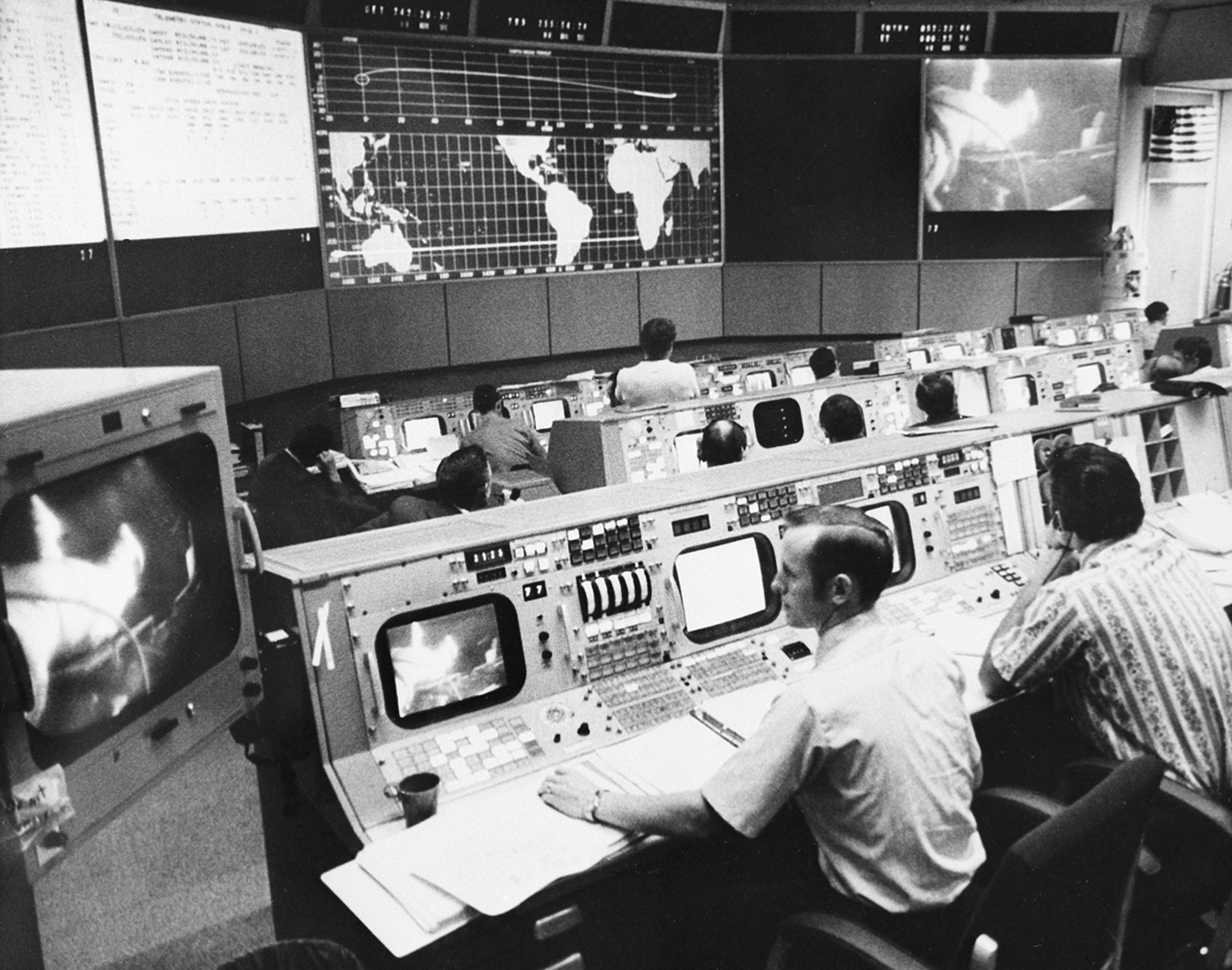 Flight managers monitored Apollo 11 from Mission Control at the Johnson Space Centre. (That’s who astronauts were talking to when they communicated with “Houston.”)

Last year the room was restored to recreate the way it looked in 1969 and opened to the public.

Today, the flags planted on the moon have almost certainly lost their colour and are probably disintegrating.

Six American flags were planted on the lunar surface between 1969 and 1972. As of 2012, at least five of those were still standing. But scientists think sunlight has likely bleached away their colours, leaving the fabric white. They may even be disintegrating in the harsh conditions.

Dave Mosher and Hilary Brueck contributed reporting for this story.