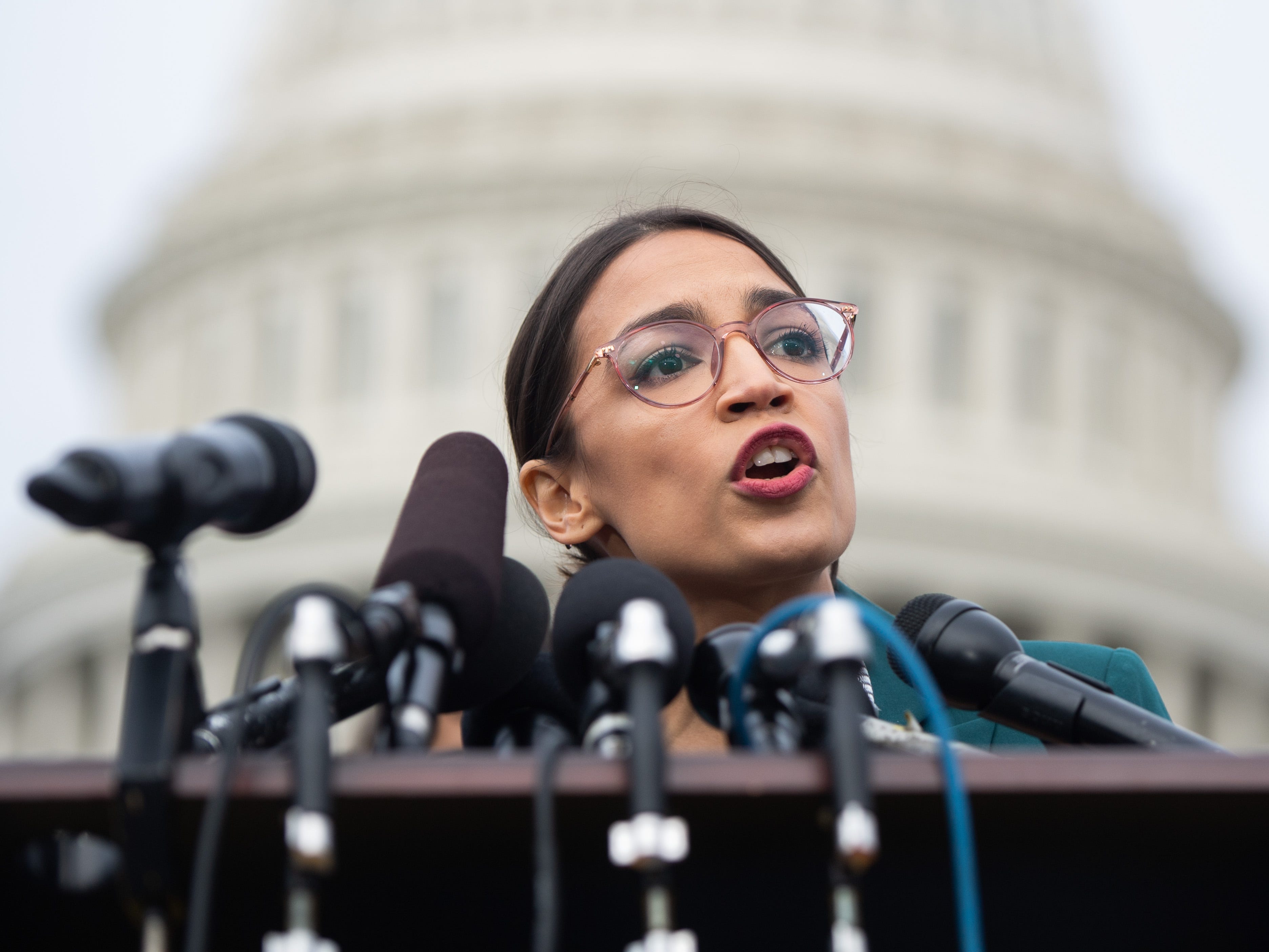 SAUL LOEB/AFP via Getty ImagesUS Representative Alexandria Ocasio-Cortez, Democrat of New York, speaks during a press conference calling on Congress to cut funding for US Immigration and Customs Enforcement (ICE) and to defund border detention facilities, outside the US Capitol in Washington, DC, February 7, 2019.

Progressive Democratic congresswoman Alexandria Ocasio-Cortez, responded to the release of Illinois 17-year-old Kyle Rittenhouse on social media, according to the New York Post.

In late August, Rittenhouse is accused of bringing an AR-15 style rife to protests for Jacob Blake â€” who was shot by police in Kenosha, Wisconsinâ€” and fired at demonstrators, resulting in two fatalities and one injury, Insider previously reported.

Rittenhouse faces first-degree intentional homicide, first-degree reckless homicide, and first-degree reckless endangerment, as Insider Charles David reported. He was released from jail on Friday after a $US2 million bond was posted with the help and donations from actor Ricky Schroder as well as MyPillow CEO and Trump ally, Mike Lindell. “Special thanks to Actor Ricky Schroder @rickyshroder1 & Mike Lindell @realMikeLindell for putting us over the top,” his attorney, Lin Wood tweeted on Friday.

AOC responded to Rittenhouse’s release on Twitter, calling it a “protection of white supremacy” and “law and disorder.”

“People who argue that dramatic changes to policing, including budgetary ones, will mean ‘violent people will be let out of jail to roam free’ rarely ever acknowledge that’s actually the current system we have today for the privileged,” AOC tweeted on Saturday.

“Does anyone believe Rittenhouse would be released if he were Muslim & did the same thing in a diff context?” she continued. “For people who say ‘systemic racism doesn’t exist,’ this is what it looks like: protection of white supremacy baked deep into our carceral systems.”

People who argue that dramatic changes to policing, including budgetary ones, will mean “violent people will be let out of jail to roam free” rarely ever acknowledge that’s actually the current system we have today for the privileged https://t.co/MXnm6h3PdZ

President Donald Trump and conservatives have defended the white teenager from Illinois, viewing him as a symbol of their beliefs, Insider’s Kelly McLaughlin reported. Republican Rep. Anthony Sabatini of Florida tweeted, “KYLE RITTENHOUSE FOR CONGRESS,” on Saturday.

According to the NY Post, Cori Bush, Missouri representative-elect and a new member of “The Squad,” also called out Rittenhouse’s release, asking why non-convicted inmates who are suffering from the impact of COVID-19 haven’t received the same grace.

“80% of Texas county jail inmates who have died from COVID-19 were in pre-trial detention and had not been convicted of any crimes. If Kyle Rittenhouse can be released, is pre-trial detention really an issue of public safety?” Bush tweeted. “We need to decarcerate to save lives.”