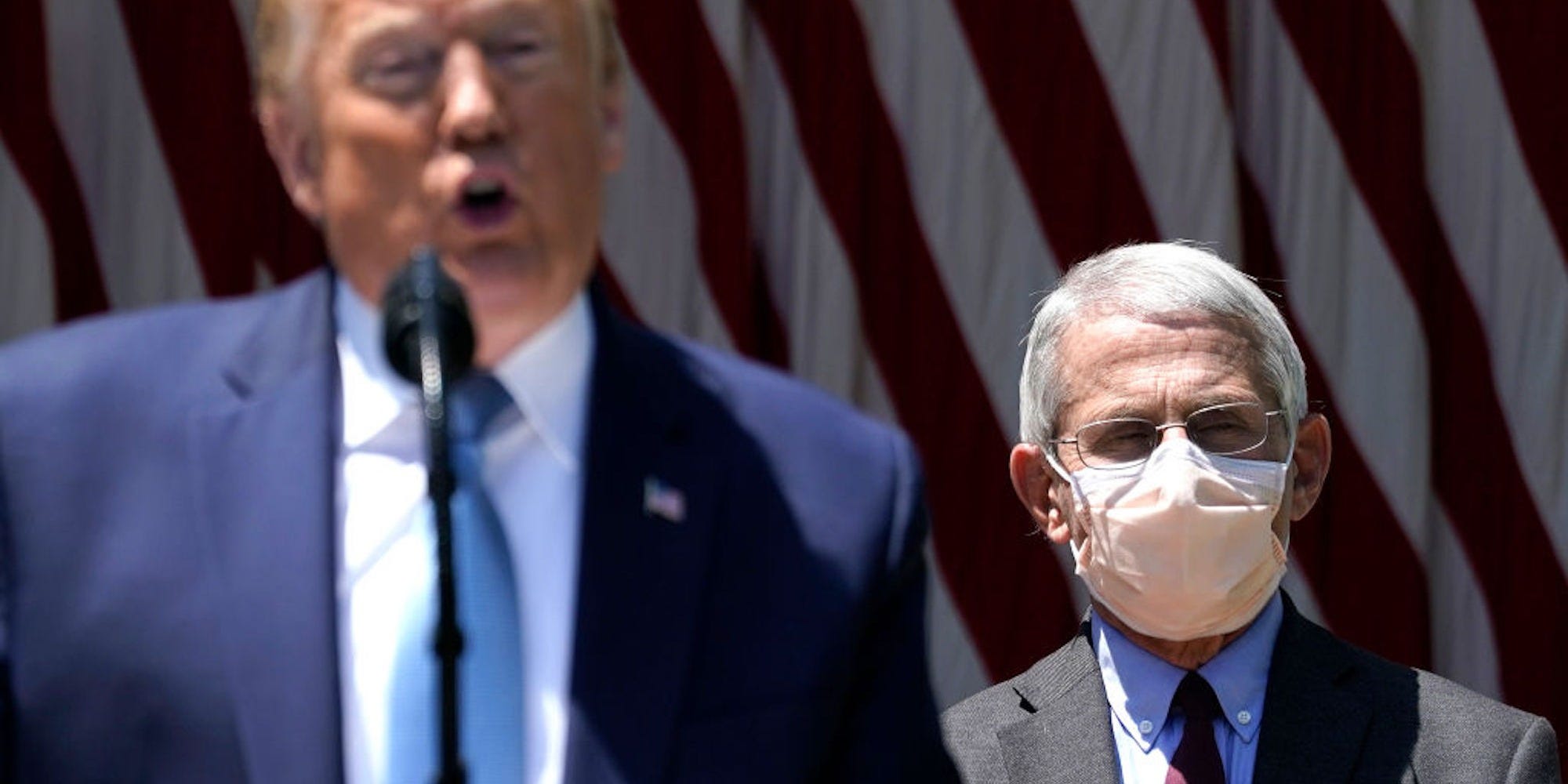 Drew Angerer/Getty ImagesPresident Donald Trump is flanked by Dr. Anthony Fauci, director of the National Institute of Allergy and Infectious Diseases while speaking about coronavirus vaccine development in the Rose Garden of the White House on May 15, 2020 in Washington, DC.

US infectious disease expert Dr. Anthony Fauci said he wears a face mask to serve as a “symbol” of what “you should be doing” amid the coronavirus pandemic, and he called on Americans to do the same.

“I want to protect myself and protect others, and also because I want to make it be a symbol for people to see that that’s the kind of thing you should be doing,” Fauci told CNN’s Jim Sciutto.

“When I walk around the street in the neighbourhood I live in Washington, DC, which still has a considerable number of infections, it’s very clear that many people are doing that,” he continued.

The nation’s top health expert acknowledged that masks are “not 100% effective” at preventing coronavirus infection, but said it is also out of respect for one another to ensure you won’t potentially spread the virus. 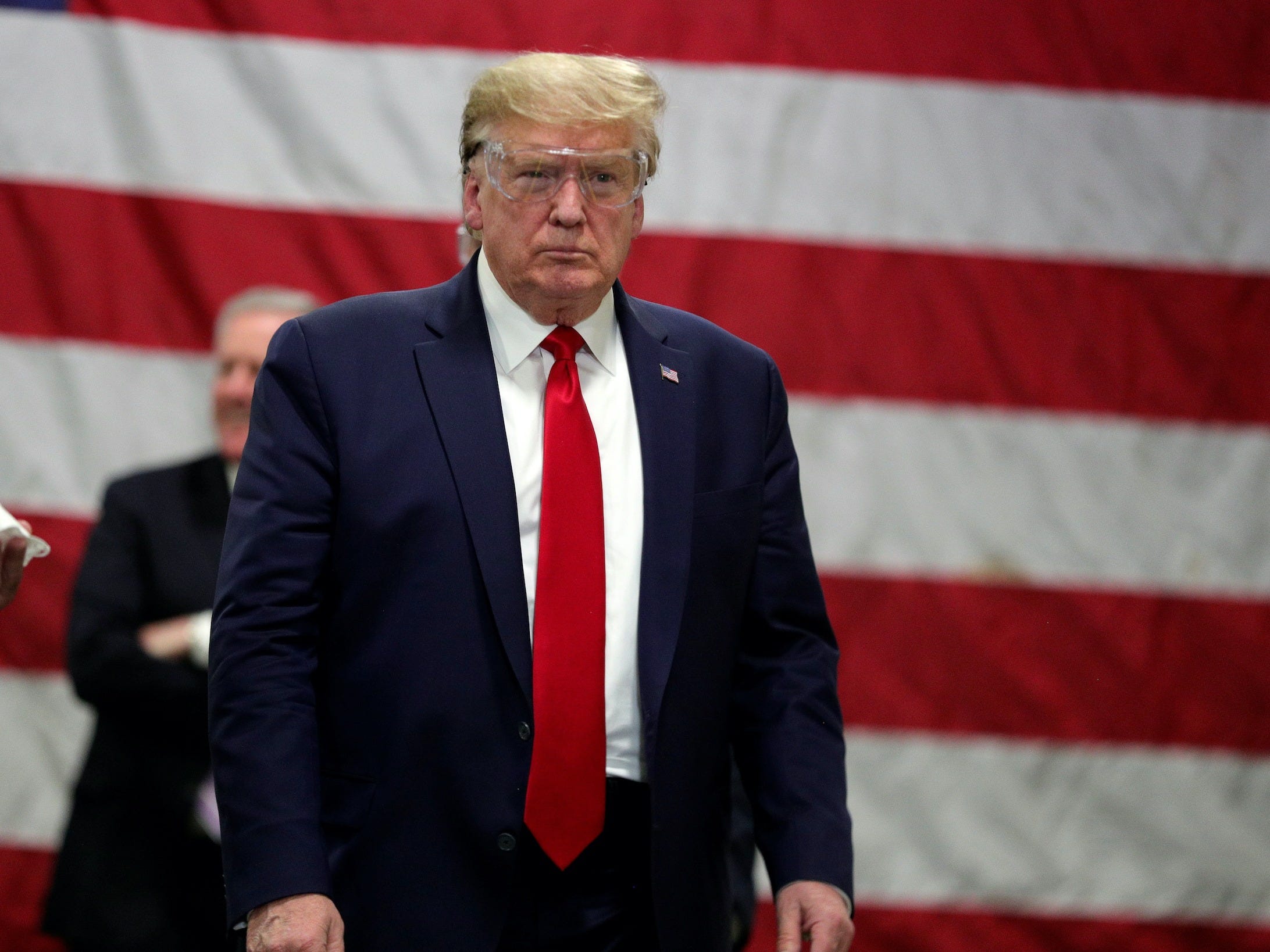 Fauci’s comments are at odds with President Donald Trump’s views. The president has refused to wear a mask in public and has politicized mask-wearing.

Trump shared a tweet appearing to mock former Vice President Joe Biden for wearing a face mask at a Memorial Day ceremony on Monday. The president also claimed a reporter was trying to be “politically correct” after he refused to remove his mask to ask a question during a press briefing.

Trump has routinely refused to wear a mask in public and has been photographed without one when touring factories producing supplies to combat the pandemic. He reportedly wore a mask during a private portion of a visit to a Ford factory but later removed it during the tour.

Fauci went on to call for a more cautious approach to reopening the US, contrasting the president’s push for states to reopen which fuelled anti-lockdown protests in various states.

Fauci called instances breaking social distancing, like the packed pool party at the Lake of the Ozarks, “very troubling because that’s inviting there to be an issue.”

“I mean we are going to see upticks of cases even under the best of circumstances when you reopen,” he said. “… What we need to do is have the capability of responding in an effective way of doing the kind of identification, isolation, and contact tracing.”

“But when you have situations in which you see that type of crowding with no masks and people interacting, that’s not prudent and that’s inviting a situation that could get out of control,” Fauci added. “Understand you’re going to gradually do this, but don’t start leapfrogging over some of the recommendations and the guidelines because that’s really tempting fate and asking for trouble.”

Dr. Anthony Fauci says he’s “not so sure [hydroxychloroquine] should be banned” as a treatment for coronavirus, “but clearly the scientific data is really quite evident now about the lack of efficacy.” https://t.co/LzfX7XM9P9 pic.twitter.com/1thkE0GsN1