A lot happens in the final few minutes of “Antebellum,” the new horror movie starring Janelle MonÃ¡e that premieres Friday.

“Antebellum” follows the dual stories of Eden (MonÃ¡e), an enslaved Black woman on a mysterious plantation, as well as Veronica (also MonÃ¡e), an accomplished writer and lecturer in modern-day times.

The movie ends with a twist that melds both stories together.

Warning: Major spoilers for the plot of “Antebellum” ahead. This is your last chance to head back before spoilers.

Near the end of the film, it’s revealed that Veronica isEden â€” they’re the same person. Veronica was enslaved after being kidnapped on a work trip and renamed Eden. The plantation is in actuality a Civil War-themed park where racist white people can beat, brand, and sexually assault the kidnapped Black people.

Veronica makes her escape at the movie’s end and manages to kill most of the plantation’s overseers. She even has a bloody confrontation with the southern belle, Elizabeth (Jena Malone), who was responsible for her kidnapping and enslavement.

Here’s a spoiler-filled guide to the end credits scene of “Antebellum.”

Veronica escapes at the end of ‘Antebellum,’ and her exact fate is unknown

The movie gives Veronica an ostensibly “happy” ending, as she’s able to escape the park (riding with a hatchet on horseback through a battle re-enactment sequence) and is ostensibly reunited with her husband and daughter.

During her escape, she also kills most of the plantation’s overseers, including the man responsible for her regular rape and torture, as well as various other racists. One of her companions is murdered, but Veronica is eventually able to ride to freedom.

Even though her reunion with her family isn’t shown, it’s implied that Veronica is able to return to her normal life, albeit emotionally and physically scarred.

While it’s never explicitly discussed as to how or when the park (called Antebellum) came to life, a mid-credits scene does show the fate of the park after Veronica escapes.

We know that the organisers of the park, including Elizabeth, were racists who believed that Black people should be reenslaved as a “reminder” of their “place” in society.

And given the scope of the park organisers’ crimes â€” hundreds of Black people appeared to be enslaved on the plantation â€” it’s no surprise that the FBI becomes involved. During the end credits scene, federal agents are shown patrolling the fields of the plantation theme park and recording survivors’ testimony about the park’s conditions.

It’s not super clear as to what happened to the other white overseers, but given the FBI’s careful documentation, it seems like criminal charges are imminent.

The park is razed to the ground

One of the final scenes in the credits shows a bulldozer coming through and knocking down the sign to Antebellum, which proclaims its status as a “Civil War re-enactment” park.

And even though the exact fate of Antebellum’s remaining supporters and creators isn’t mentioned, the credits scene appears to suggest they will be held accountable.

You can watch the trailer below.

State and federal leaders are considering changes to immigration amid reopening... 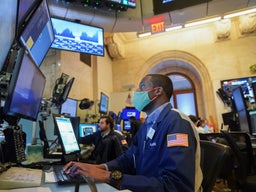