Andrew Yang's campaign manager had zero political experience. This is how he built an insurgent candidacy that outlasted powerful rivals. KEENE, N.H. – Resting his lanky frame on a makeup chair backstage at an old vaudeville theatre, Andrew Yang’s then-campaign manager kept his bloodshot eyes fixed on his phone while the candidate fired up the crowd.

Running on minimal sleep and a Cumberland Farms XL Chillzone filled with Diet Dr. Pepper, Zach Graumann was in the midst of post-Iowa layoffs, the sprint to voting day in New Hampshire and, ultimately, the end of one of the 2020 campaign’s most surprising efforts.

Graumann, 32, has spent most of his career in banking and social entrepreneurship, with no prior political experience before finding himself at the helm of Yang’s campaign for more than two years.

Under his stewardship, the longshot bid would manage to outlast those of senators, governors and other well-known Democrats who succumbed to a crowded field and somehow missed what Yang and his team got right.

But Yang’s candidacy has more to offer than an admirable underdog tale.

By going niche and taking risks online, Yang not only cultivated a following, but showed Democrats how to rewrite the campaign playbook for the digital age.

“A lot of people who think that you can ‘disrupt’ politics usually find themselves falling flat on their face,” Graumann said. “At the end of the day, you’ve gotta get people to pull a lever – or to caucus, which is another beast.

“But I will say there are a lot of approaches, particularly to marketing [where Yang stood out],” he continued. “That’s the approach Andrew and I took: you can’t just be good, you’ve gotta be different. You’ve got a crowded field, how do you stand out?”

For Graumann, the answer ended up lying in corners of the internet overlooked by most Democratic campaigns: Reddit, Instagram and longform podcasts.

That’s what brought in the donations needed to make the debate stage and grow the campaign.

Graumann described the unconventional online blitz as “optimising” for the Democratic National Committee’s individual donor thresholds go get on stage.

Podcasts, in particular, catapulted the campaign.

“The cable news outlets weren’t itching to take Andrew Yang on their shows,” Graumann grumbled, perhaps more from fatigue than the campaign’s public grievances with MSNBC and CNN.

Going on the lengthy and popular podcasts hosted by neuroscientist and author Sam Harris, and, subsequently, the all powerful Joe Rogan Experience – with the comedian and UFC announcer’s interview reaching over 5 million views on YouTube – is what started bringing in the fundraising dollars and the fanbase.

Save for Rep. Tulsi Gabbard, it was a gamble none of the other campaigns were willing to take at the time, with the field continuing to multiply in the late winter of 2019. 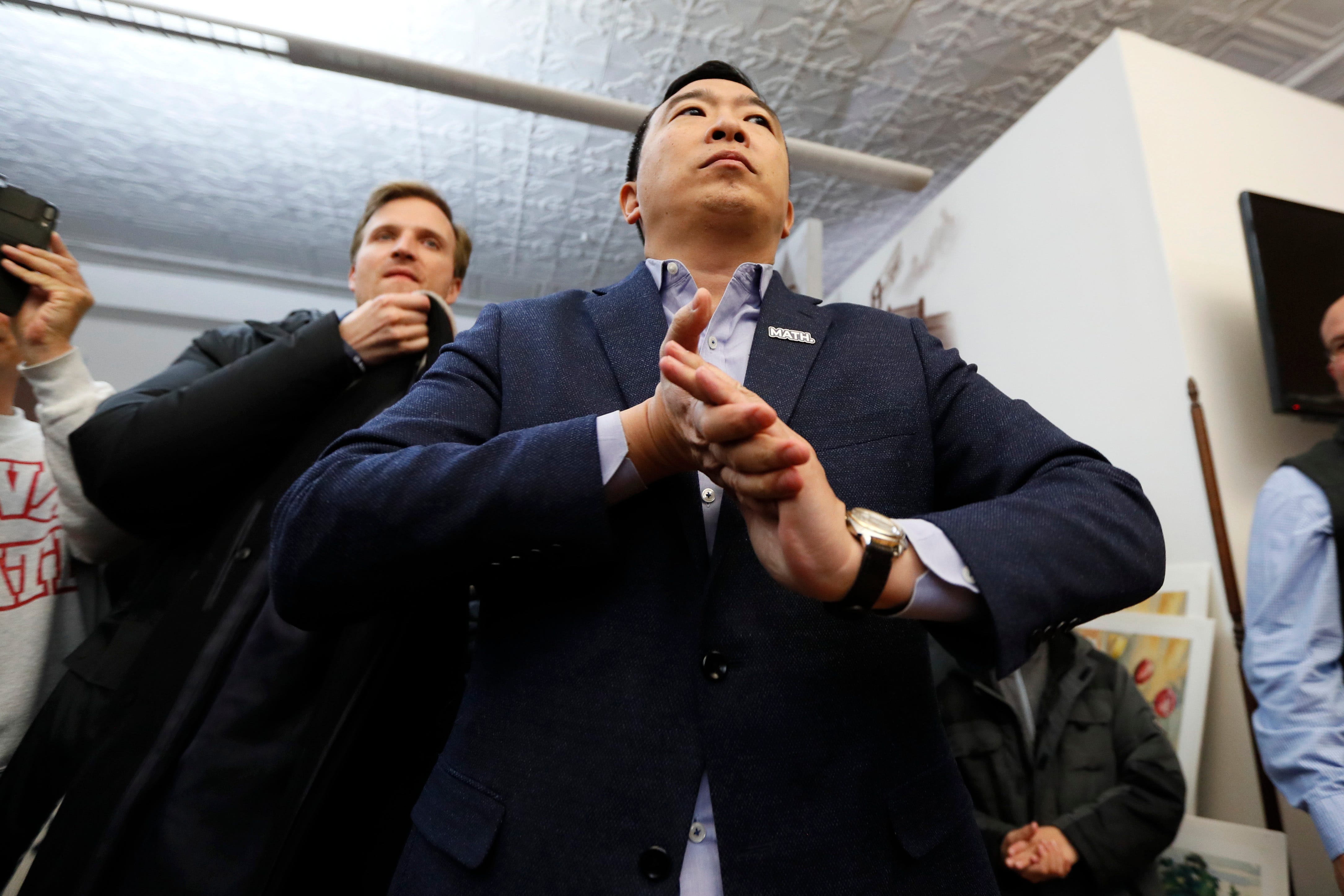 Charlie Neibergall/Associated PressGraumann and Yang wait in the wings ahead of a town hall at the Perry Perk coffee shop, Friday, Jan. 3, 2020, in Perry, Iowa. (AP Photo/Charlie Neibergall)

Graumann moved around growing up, with his formative years spent in Buffalo, N.Y. and West Hartford, Conn.

Upon graduating from Duke, Graumann was faced with a utilitarian dilemma: join Teach For America in post-Katrina New Orleans and have a tougher time paying off his student loans, or cash in on Wall Street at UBS?

“I remember hating that decision,” Graumann sighed. “It’s like, you can either save the world or make money. You can do well or do good, but you can’t do both.”

He ended up gravitating toward UBS’ charity efforts and founded a non-profit called SuitUp, which runs career-awareness competitions – or “Shark Tank-lite,” in Graumann’s own words – and other events for disadvantaged kids with the backing of Fortune 500 companies and startups.

In that “social entrepreneurship” realm is where he would eventually meet Yang, quickly leading the scaling up of a campaign flush with cash but lacking in political insiders who had navigated the waters before.

While some senior staff and advisers get the full profile treatment on insurgent campaigns – such as Pete Buttigieg’s senior communications adviser, Lis Smith, who is credited with waging an all-out exposure strategy to help the previously unkown mayor break through the pack – Graumann kept a low profile throughout the campaign.

Perhaps the most exposure the former UBS banker got was in a viral video clip of him restraining Yang from giving a shot of whipped cream to a supporter on his knees during a field office opening party in New Hampshire.

Despite being 13 years Yang’s junior, Graumann said he often found himself being a more cautious or steadying influence on Yang, but occasionally it would be the other way around.

“I have to be the straight man or the dad on the campaign,” Graumann quipped. “He jokes that he’s the baby on the trail.”

Backstage at the ABC debate in Manchester, N.H., Yang’s wife, Evelyn, said her kids call Graumann “Uncle Zach,” describing him as one of Yang’s closest friends and confidants.

Mrs. Yang said Graumann’s background in banking and looks can be deceiving, with the campaign manager having a softer side than one may assume by picking him out of a crowd.

“I guess you could say I look the part,” Graumann said back at the Colonial Theatre in Keene. “But if you actually look at my resume [of philanthropy], I’m far from a Wall Street bro in that sense.” Graumann jumped onboard the campaign about as early as possible.

During a dinner after the Jefferson Business Roundtable in June 2017, Yang told a small group of social entrepreneurs that he was planning on running for president after delving into the looming threat of automation on the American workforce.

“So Yang comes in and drops this bomb – he’s like, ‘I’m running for president’ – and people are like, ‘Of America?'” Graumann chuckled.

As attendees exchanged curious glances, Graumann was sold, especially after reading an early copy of Yang’s book, “The War on Normal People.”

Graumann described Yang’s personality as being “a force of nature” that can take over almost any room.

As ludicrous as the idea may have initially seemed, Graumann said he had confidence in Yang’s vision and drive to have go of it in politics.

Leaning on a tech bro-ism, Graumann called Yang a “unicorn” in the world of social entrepreneurship.

“And now, he’s a unicorn in this space too,” Graumann said of the rookie campaigner. “He’s Andrew Yang. He’s just a force.”

It wasn’t all rosy for the Yang insurgency.

Poor finishes in Iowa and New Hampshire led to a swift dropout, and post-Iowa layoffs caught employees off guard.

Back in New York, Graumann said the sprint to New Hampshire left him wishing the cutbacks could have been handled better, and that wrapping up after dropping out was one of the hardest parts of his duties.

“It’s never fun to wind down a campaign,” he said. “It’s like you’re building a Fortune 500 company and then shutting it down in a matter of months.”

Team Yang also ran into occasional trouble with its heavily male base of vocal supporters.

A flurry of news cycles reported that some used the campaign’s name in online white nationalist and xenophobic tropes being shared.

Yang was quick to disavow those factions, but Graumann said finding a way to quash the online hatred without a whack-a-mole effect became a steep task.

“So we set up our ‘Humanity First Values,’ and it sounds so cheesy, but it totally works,” he continued, “Then you can have moderators in your Facebook groups, and Twitter and elsewhere that say, ‘Hey, if you’re not living by these values, we’re gonna talk to you, and if you don’t wanna [abide], then you’re just not gonna be part of the Yang Gang.'”

The past and future of the #YangGang 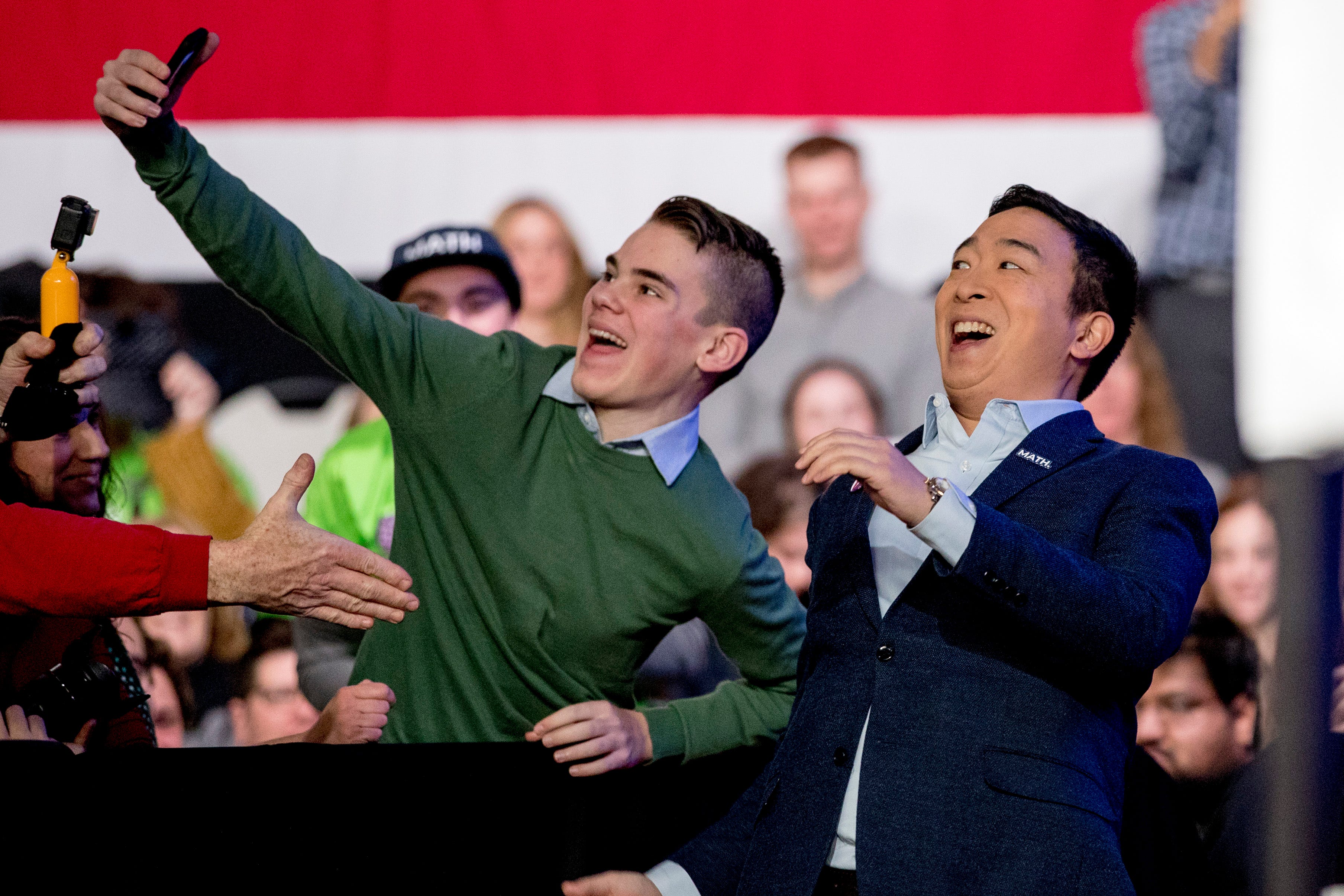 Key to the campaign’s success was “branding supporters,” according to Graumann.

Beyonce has the “Beyhive.” Taylor Swift has the “Swifties.”

Andrew Yang has the #YangGang.

“One of the things I’m really passionate about is identity branding,” Graumann said.

He drew a parallel to 2016, where Trump and Sanders supporters went by their own monikers – #deplorables, MAGA, feeling the Bern – while other candidates looked on.

Despite some internal disagreement over whether to use the word “gang” in campaign messaging, Graumann convinced the team to roll with the Yang Gang brand after discovering a random Instagram comment.

“We knew out of the gate that we had to build an army,” he said, calling the name “visceral.”

The other major factor in the Yang Gang sustaining the campaign was in the candidate’s interactions with them.

Graumann noted that despite valid arguments to the contrary, Yang used his own Twitter account throughout the campaign. He traded memes with them.

That two-way street between candidate and supporter has untapped potential in the digital era, Graumann argued, as long as the candidate comes across as “authentic.”

Social psychologists would describe the dynamic in most nationwide campaigns between the candidate and supporters as a parasocial relationship – the fan may know everything about their favourite athlete or musician, but the principal doesn’t have to reciprocate.

Yet what the success of the Yang campaign revealed, for Graumann, is the reward of going niche when other campaigns compromise for broad appeal.

Once he was back in New York on a frigid February weekday, the now ex-campaign manager reflected on the highs and lows of the past two years.

“There are a few mistakes I wish we could have back,” he said when asked about how the layoffs went down, declining to elaborate further on personnel.

As for what’s in store for Yang, Graumann grew confident but coy.

“I think he’s probably one of the more coveted endorsements out there [for the rest of 2020],” Graumann said. “Andrew Yang would bring a lot of different types of voters and excitement to anything he does.”

“As a Democrat, I hope the party looks at what we did and what Andrew’s done for future elections and races.”