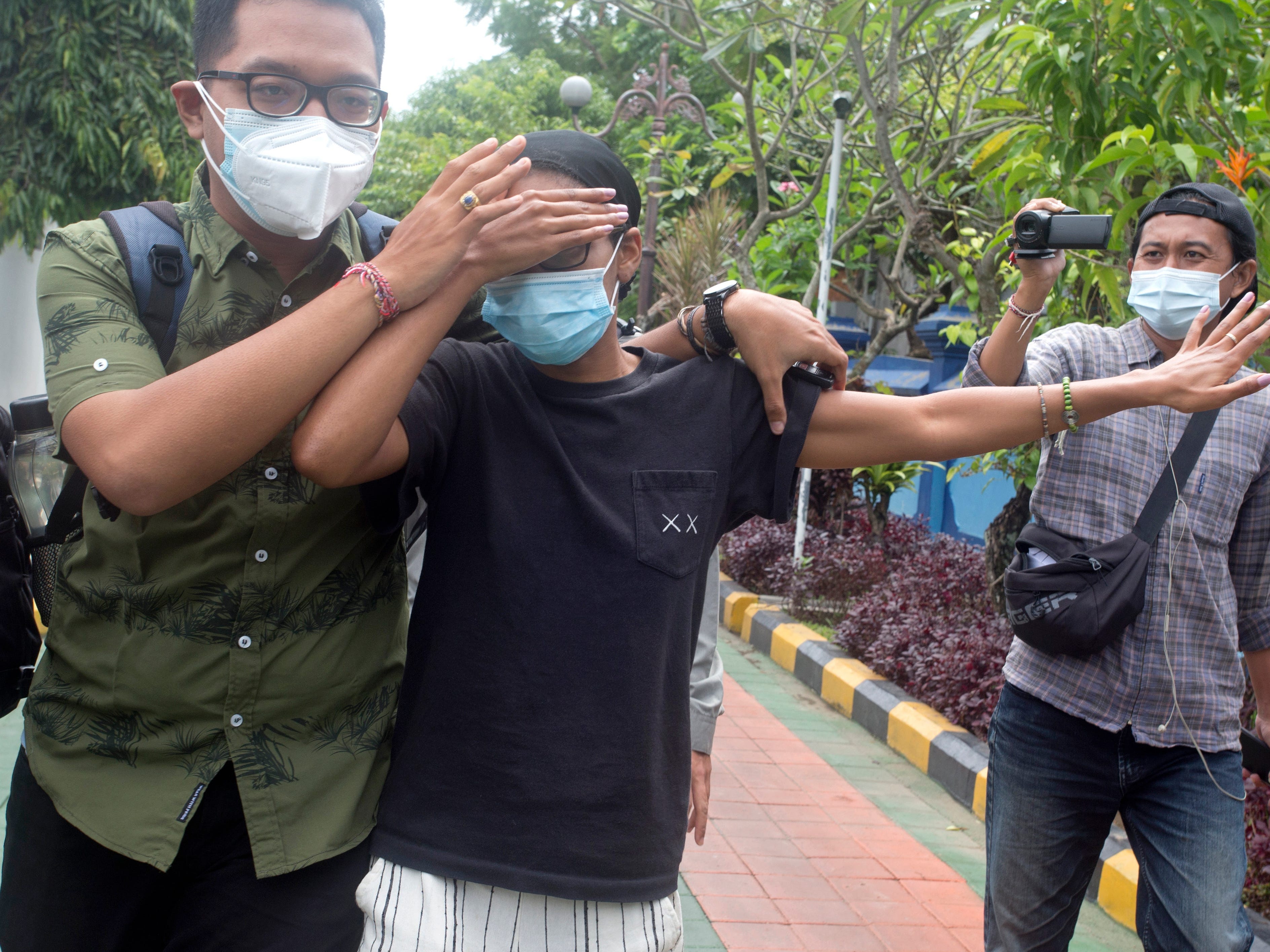 Firdia Lisnawati/APKristen Grey and her lawyer at the immigration centre in Denpasar, Bali, Indonesia.

The American expat who was deported from Bali in January after she tweeted about the island as a cheap, LGBTQ-friendly place to live shared her version of events with Insider, speaking out publicly for the first time since her deportation.

Kristen Grey, a graphic designer from Los Angeles who moved to the Indonesian island with her partner in January 2020, said she did nothing illegal and feels that she was deported due to public pressure surrounding her tweets.

The expat’s tweets were initially considered insensitive by locals

In January 2021, Grey appeared to tweet about the “elevated lifestyle” she enjoyed in Bali, as well as how “queer-friendly” she felt it was in a series of tweets on her since-deleted account.

“This island has been amazing because of our elevated lifestyle at a much lower cost of living. I was paying $US1300 for my LA studio. Now I have a treehouse for $US400,” she wrote, according to screenshots that purportedly show her tweets.

One of Grey’s tweets appeared to plug her $US30 “Our Bali Life is Yours” e-book, which could be supplemented with personal consulting for a $US50 fee and was meant to help others achieve her Bali lifestyle, according to the Bali Sun.

The book was released on Gumroad on January 15, a day before the Twitter thread went viral.

The Bali Sun reported that the e-book gives tips on how to enter Bali despite Indonesia’s borders currently being closed to visitors due to the pandemic, how to avoid coronavirus health and safety regulations, and how to circumvent taxes.


Read more:
Bali is deporting an American expat after she tweeted about the island as a cheap, LGBTQ-friendly place to live

Grey received swift backlash from people claiming that she was flaunting her privilege as an American in Indonesia, encouraging gentrification, and being misleading by calling Bali LGBTQ-friendly.

At the time, one person, who identifies “as a young Indonesian queer woman,” tweeted: “I was f—— livid at [Grey’s] audacity for plugging her tips and tricks on how to cheat the visa system to live an ‘elevated’ life while I am here stuck in the closet in fear of persecution and struggling to make ends meet.”

im sorry, but as a young Indonesian queer woman i was fucking livid at her audacity for plugging her tips and tricks on how to cheat the visa system to live an "elevated" life in Bali while I am here stuck in the closet in fear of persecution and struggling to make ends meet. https://t.co/ONmE8QMR0N

According to a 2020 Pew Research Centre study that surveyed 38,426 people in 34 countries, only 9% of respondents in Indonesia said they believe homosexuality should be accepted.

A 2019 US Department of Labour Country Report on Human Rights Practices in Indonesia cites “violence against lesbian, gay, bisexual, transgender, and intersex (LGBTI) persons” as a concern, and that discrimination against LGBTQ individuals continues as anti-discrimination laws don’t apply.

In 2020, Indonesian lawmakers tried to introduce legislation that would force LGBTQ people to undergo government-sanctioned rehabilitation to “cure” them.

Multiple local outlets reported that Grey’s tweets led the government to look into her, while Reuters said she was “summoned for questioning.” Grey, however, says she approached the government herself.

The head of the Bali office for the Ministry of Law and Human Rights, Jamaruli Manihuruk, said in a press conference on January 19 that Grey appeared to be selling an e-book and charging consulting fees, which was considered doing business and violated the terms of her visa.

Grey’s lawyer told Reuters that she had a social-cultural visa,which does not allow for any sort of business activities or employment.

Manihuruk also accused Grey’s posts of having “disseminated information disturbing to the public,” which he said is what led to her deportation, the Associated Press reported.

Grey maintained that she had done nothing wrong, however.

“I’m not guilty,” Grey told reporters at the same press conference. “I have not overstayed my visa, I have not made money in Indonesian rupiah in Indonesia. I put out a statement about LGBT, and I’ve been deported because I’m LGBT.”


Read more:
10 maps showing how different LGBTQ rights are around the world 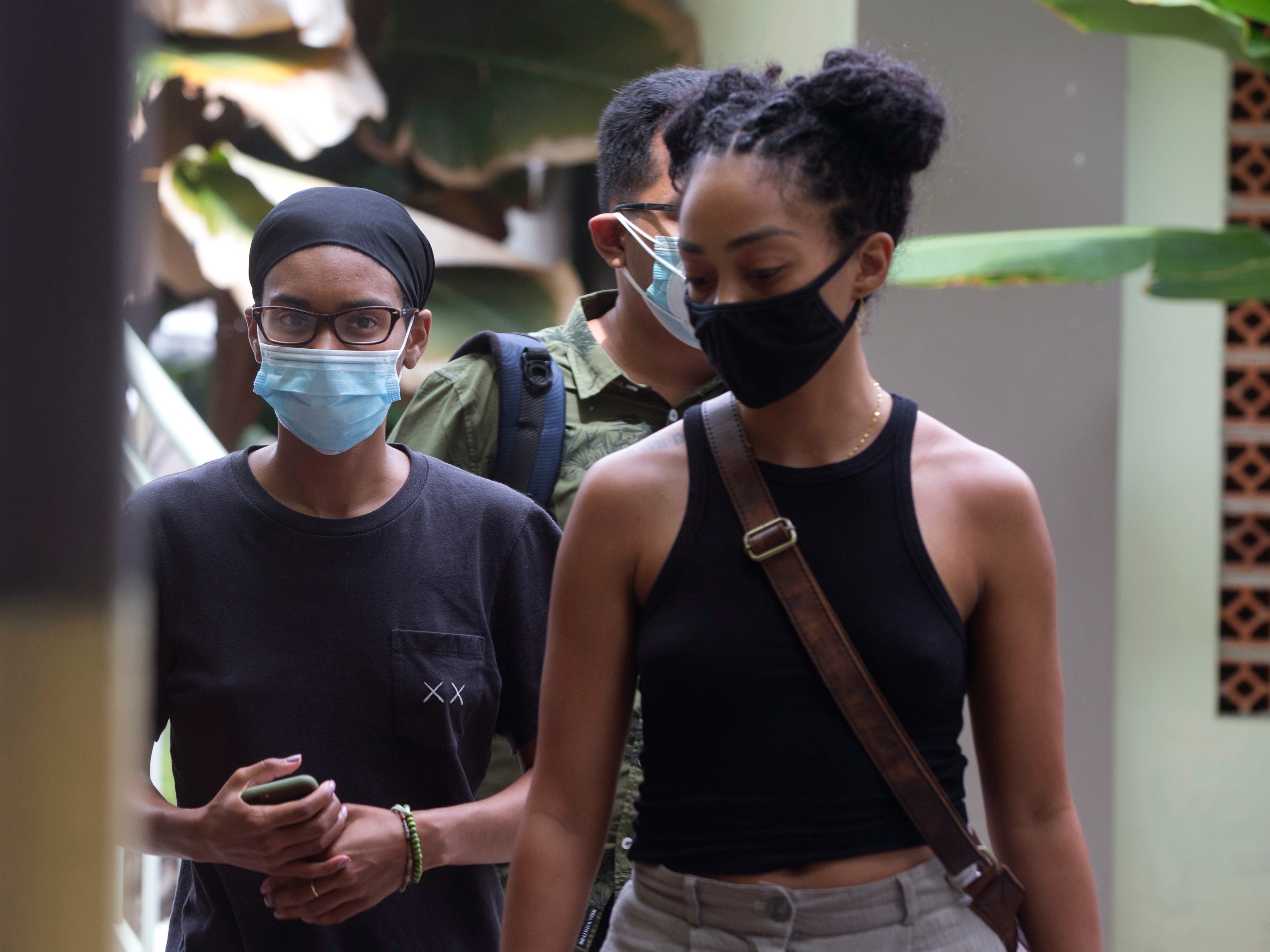 Grey told Insider that her e-book did not include ways to evade taxes or illegally enter the country and said she felt a lot was misconstrued.

She said that she created the e-book with her partner after getting hundreds of questions about Bali on social media.

“We created the e-book to address the frequently asked questions and provide personal recommendations for a wide variety of themes, from excursions and our favourite restaurants to cultural etiquette, visas, and legal procedures,” she said.

Grey said that the Balinese government actually read her e-book: according to Grey, an immigration officer asked to see it during her interrogation on January 18 and read it out loud, though none of this was recorded. On January 19, she said she met with tax generals who told her they had also read it, and, according to Grey, “thought it was very nice, and they thanked us for it.”

The Directorate General of Immigration did not respond to Insider’s request for comment. 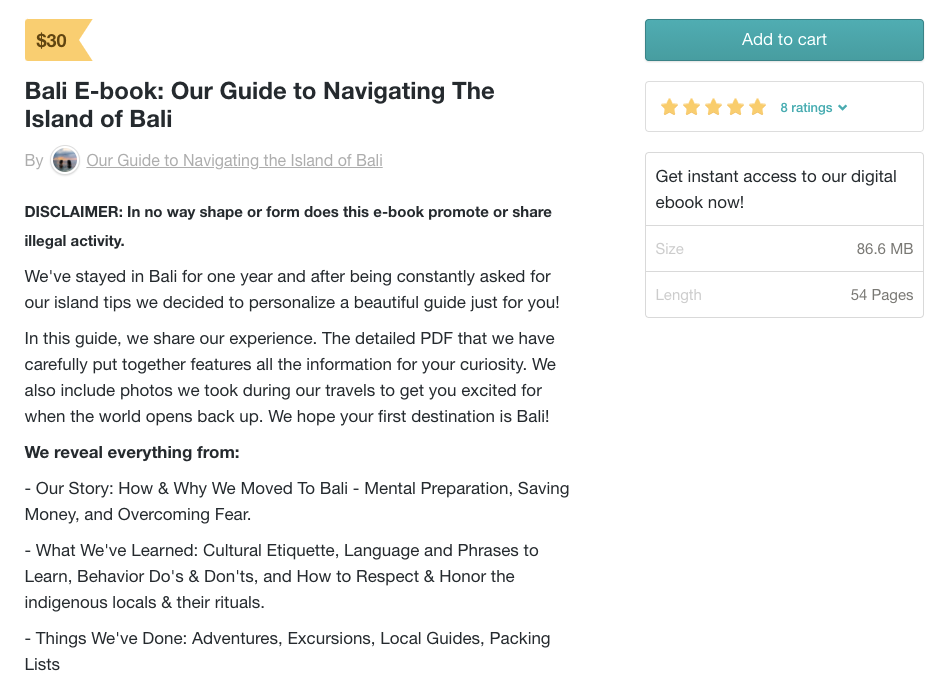 Screengrab/GumroadA preview of her e-book includes a disclaimer that says it does not promote illegal activity.

“My e-book in no way, shape, or form shares any illegal activity,” she said. Grey said that she wrote the e-book for post-pandemic visitors, but, based on people’s reactions to her tweets, she thinks people assume she illegally moved to Bali during the pandemic and was encouraging others to do the same.

Grey and her partner arrived in January 2020, and, like most foreigners, according to Grey, were granted an “emergency stay visa” that lasted from March until September before extending their social-cultural visa until the end of January 2021.The Jakarta Post confirms the existence of such a visa.

She admitted that her e-book outlines different visas, including an e-visa that she said was used by people to get into the country after December 2020, but that it was legal and advertised by the government.

The B211A single entry e-visa is advertised online as a way for visitors “to enter Bali, Indonesia, during [the] COVID-19 pandemic” to engage in “humanitarian activities, volunteering, family reunion, business, or investment visit [sic],” according to Bali Visas.

“We were never charged for overstaying our visa, or having an illegal visa, or violating it,” Grey said.

“I was suspected â€” I was never charged â€” of providing unsettling information, disturbing the public,” she said.“That is the basis for my deportation.”

The Ministry of Law and Human Rights, the Ministry of Foreign Affairs, and the Directorate General of Immigration did not respond to Insider’s request for comment.

She believes that stating that Bali was “queer-friendly” in her tweets was the crux of the problem, but that she was speaking of her own, personal experience.

“Culturally, in Bali, I never experienced any hate, hate speech, or discrimination for my sexual preference, orientation, and expression,” she said.

She added that Bali, the island she was writing about, is not like the rest of Indonesia.

She said she now understands that most of Indonesia’s LGBTQ community faces vitriol and intolerance, and takes responsibility for the uproar her tweets caused.

Grey said that her official paperwork states that her deportation was also due to being accused of inviting others to Bali during the pandemic, though she emphasised that she was encouraging people to visit in the future.

She added that the government also suspected her of working in Indonesia without a proper business visa, but said that Bali does not regulate online work, and essentially only offers two kinds of visas: for tourists and for people with local businesses.

She maintains that she never made any Indonesian rupiah and that her online work falls into a visa grey area.

The Directorate General of Immigration’s website clearly states that “this type of visa is not suitable for work.”

However, a website on expat life and digital nomads in Bali writes “many digital nomads who base themselves in Bali do so on a tourist visa.”Another site plainly states that the social-cultural visa, also known as a budaya visa “is widely used and abused […] The Indonesian Department of Immigration know that foreigners misuse the visa.”

She told Insider that if her story has helped even a single person, she’s ‘proud’ to have been made an example for other Westerners

“I never wanted to be the face of expat examples, but if it helps someone with their safety, with their livelihood, or with their public persona online, that’s ok,” Grey said, adding that she’s learned a lot from the conversations her tweets have sparked.

She maintains that she was never charged for overstaying or violating her visa, and said that if she had done something illegal she would have been fined or jailed.

“I left Indonesia with zero crimes or charges and paying zero fines or taxes,” Grey said.

She added that it was never her intention to disrespect Indonesian culture and that she loves Bali.

“I lacked a certain level of sensitivity in the current climate, but I will do my best to spread the message of ethical travel to Bali when it is safe and continue to share how everyone can respect and honour Bali and Indonesia as a whole,” she said.