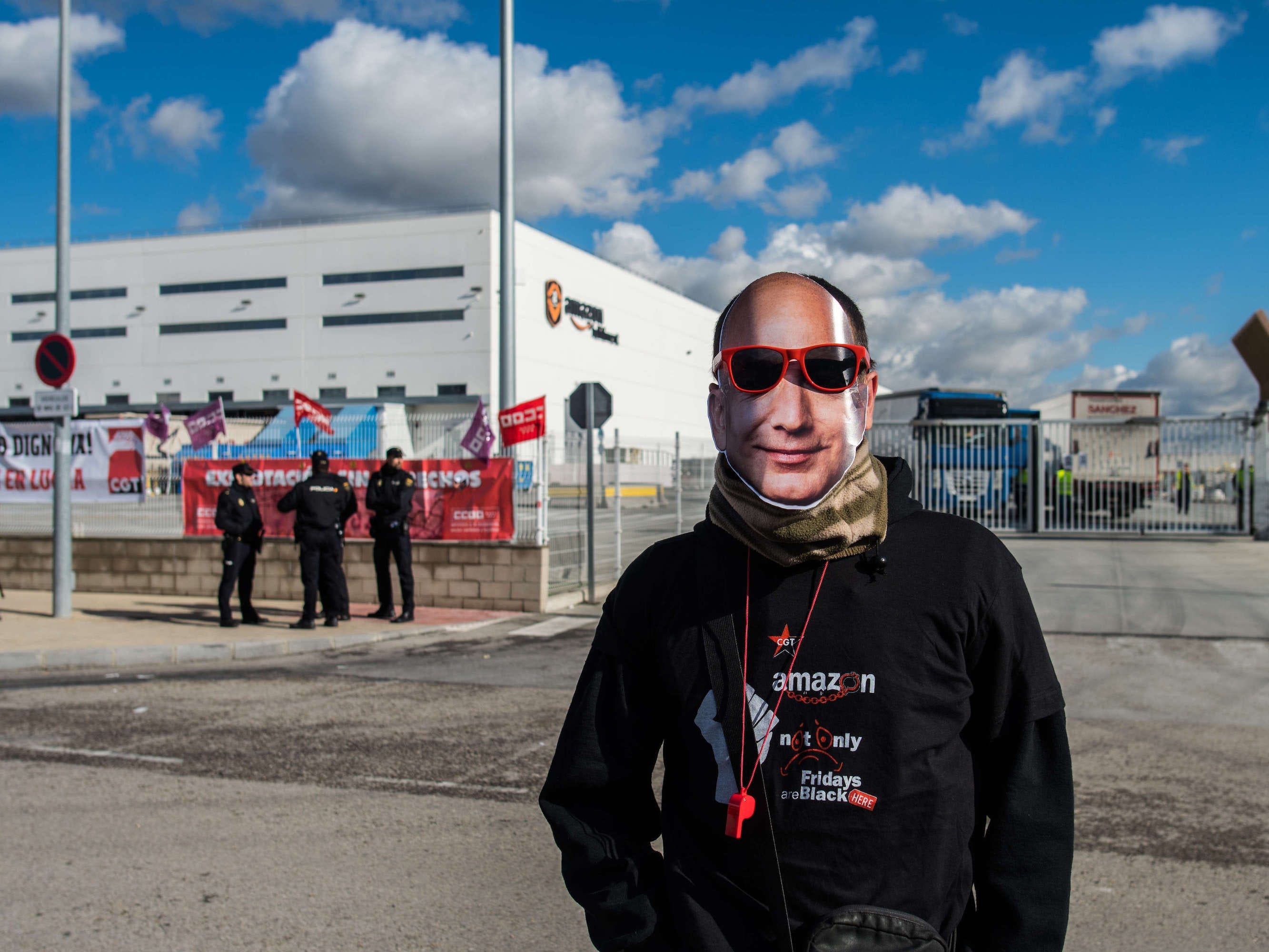 Marcos del Mazo/LightRocket via Getty ImagesAn Amazon worker with a mask of CEO Jeff Bezos during a strike on Black Friday in November 2018.

Amazon could face a court battle with a Spanish workers’ union over a report that said private investigators were hired to infiltrate and secretly surveil a strike outside one of its warehouses.

According to a 51-page document obtained by the Spanish news site El Diario, private detectives spied on an Amazon workers’ strike at a warehouse near Barcelona, Spain, on Black Friday in 2019. The strike was part of a broader freight workers’ strike in the province of Catalonia.

El Diario reported that the private detectives who compiled the document were employed by a Spanish company called Castor & Polux, which had been subcontracted by the Pinkerton Agency. A November Motherboard report said Amazon employed the Pinkerton Agency to monitor union activity across Europe.

The document contained photographs of trade unionists, workers, and even journalists who attended the strike, according to the El Diario report.

An excerpt from the document reads: “We saw a group of people meeting, who could be seen wearing CCOO and UGT union bibs/vests. They’re recorded for possible identification at subsequent events.” This was accompanied by a photograph.

Castor & Polux declined to comment when contacted by El Diario, citing client confidentiality. An Amazon spokesperson told El Diario the e-commerce firm had not instructed Pinkerton or any other agency to spy on the strike.

The Pinkerton Agency and Castor & Polux did not immediately respond to Business Insider’s request for comment.

The Spanish labour union CCOO on Tuesday announced it planned to bring legal action against Amazon. Ricard Bellera, CCOO’s secretary for work and economy in Catalonia, told Business Insider the union had asked a judge to seize both the 51-page report covered by El Diario and any documents showing any agreement between Castor & Polux and Amazon.

“CCOO wants to know if Amazon carried out, through a contracted company, exhaustive monitoring of people, photographs, and prepared reports of workers and trade unionists of CCOO. The union will assess with its legal services the filing of a criminal lawsuit against Amazon,” the union said in a press release.

It added that if the report is proved true, it would mean Amazon broke Spain’s constitutional laws on right to assembly and data privacy.

In a statement to Business Insider, an Amazon spokesperson said:

“Like any multinational business, we maintain a level of security within our operations to help keep our employees, buildings, and inventory safe â€” it would be irresponsible if we didn’t do this. We have an internal investigations team who work with law enforcement agencies to identify wrongdoing against our business and, as you would expect, any activity we undertake is fully in line with local laws and conducted with the full knowledge and support of local authorities. Any attempt to sensationalize these activities and suggest we are doing something nefarious is irresponsible and incorrect.”

This isn’t the first report of secret operatives infiltrating an Amazon warehouse.

Motherboard reported Pinkerton agents were deployed inside a warehouse in Poland in 2019 to investigate whether management was coaching candidates on how to complete job interviews. At the time of the report, Amazon spokesperson Lisa Levandowski told Business Insider that the company partnered with Pinkerton to “secure high-value shipments in transit,” not to gather intelligence on warehouse workers, and that all activities are “fully in line with local laws.”

Christy Hoffman, the general secretary of the international UNI Global Union, told Business Insider in a statement that Amazon was “using its immense power and resources to snoop on workers looking to improve their jobs.”

“As bad as spying on workers is, it doesn’t come in a vacuum. There’s a pattern here â€” Amazon’s enormous appetite for growth is bad for our societies. This is why on Black Friday more and more people who believe in the dignity of work and the politics of the common good went on strike to stand up to Amazon and demanding change,” she added.

This year on Black Friday, Amazon workers and activism groups in 15 countries staged protests against the company to demand better pay and benefits, an end to worker and union surveillance, and commitment to sustainability under the slogan “Make Amazon Pay.”