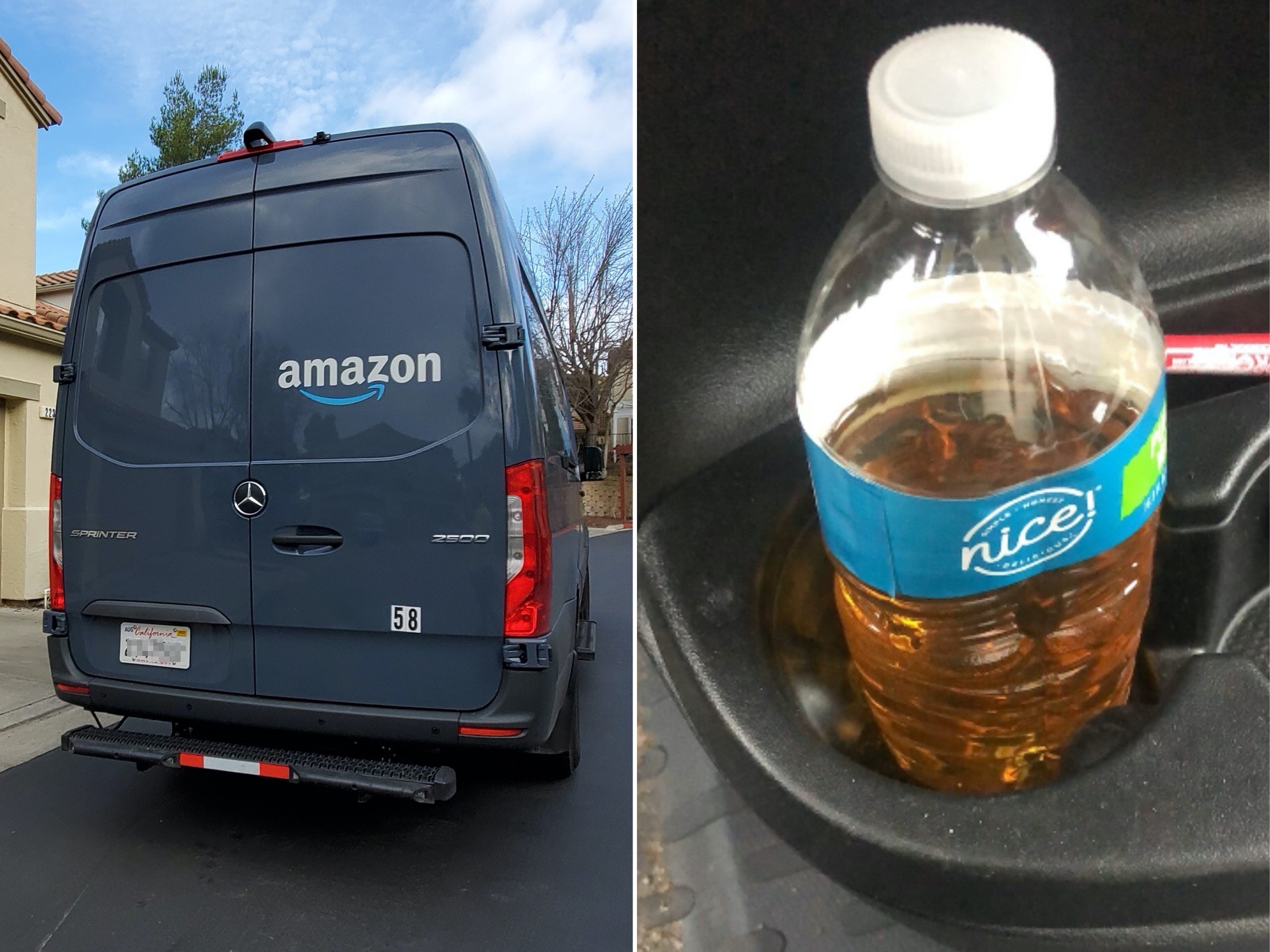 Smith Collection/Gado/Getty ImagesAn Amazon driver shared this photo with Insider of a bottle of pee inside a delivery van.

One driver told Insider that in addition to peeing in bottles, they regularly had to poop in bags because of the demands of the job. A second driver said they were aware of two incidents of bags of poop discovered in delivery vans.

Another said they struggled to change menstrual products while working. A total of eight current and former drivers told Insider this week that peeing in bottles was a common part of delivering Amazon packages

Amazon is known for its strict time constraints and tracking drivers, most of whom are employed by third-party companies. According to drivers, these expectations can make it difficult to find time to use the bathroom, despite the company’s policy of offering a 30-minute lunch and two 15-minute breaks.

A delivery driver in the Detroit area said that getting her period was “a nightmare” because she did not have the time or space to stop and change her menstrual-hygiene items. She said several female colleagues had called her crying because they leaked through their clothing while working. The driver spoke on condition of anonymity in order to speak frankly about the situation.

She added: “It’s inhumane, to say the least.”

Insider verified the identities and employment of all drivers who were interviewed about delivering Amazon packages.

A former delivery driver who stopped delivering Amazon packages in 2020 said that peeing in bottles was a frequent practice, as was pooping in bags. The driver said he started bringing his own toilet paper so he could lock the doors and poop in the back of the delivery van. He spoke on condition of anonymity to speak freely about his experience.

Amazon, the former driver said, needs to “have more empathy and more compassion” for its workers.

“They’re making so much money,” he added. “They’re one of the most wealthy companies in the history of corporations. So it’s like … provide the basic support and benefits for your workers.”

A driver in Lansing, Michigan, who spoke on condition of anonymity in order to speak frankly told Insider he “absolutely” had peed in a bottle multiple times on the job and heard of two separate incidents in which bags containing poop were found inside delivery vans.

“One day, I heard from one of my coworkers that our dispatcher was cleaning a poop bag out of the van, and I was completely appalled,” he told Insider, adding that the company “never addressed it in the group chat, never told us anything about it or said it was unacceptable.”

It was later discovered to be a male driver, he said. The second time this situation occurred, the driver said, the company dispatcher checked who had been driving the van the day before and discovered it was a woman in her mid-50s.

Amazon did not respond to Insider’s multiple requests for comment.

Amazon denied the ‘peeing in bottles thing,’ despite extensive evidence on the contrary

Amazon kicked off the discussion of “pee bottles” on Wednesday, when the company tweeted at Democratic Rep. Mark Pocan: “You don’t really believe the peeing in bottles thing, do you? If that were true, nobody would work for us,” it said.

Pocan had tweeted earlier criticizing Amazon’s anti-union efforts in response to workers at a warehouse in Alabama attempting to organize.

But there is ample evidence that Amazon workers peeing in bottles is a relatively widespread practice, especially among delivery drivers.

Insider’s Hayley Peterson reported in 2018 that drivers said it was a common practice for them to urinate in bottles because of the company’s standards and high expectations. Three years later, drivers say that the job has gotten only more demanding.

On Thursday, The Intercept published documents showing that Amazon was aware of drivers’ practice of peeing in bottles and pooping in bags. January documents leaked to the publication listed urinating and defecating in public on the job as recurring infractions.

Benjamin Nuuvali, a former Amazon delivery driver, told Insider he quit his job delivering Amazon packages for a third-party company because of how he was treated.

“Sometimes, if I’d drive to go to a bathroom, and if there was a line or anything that made that trip longer than five minutes, Amazon would text me and call me asking why I was stopped for so long and why I wasn’t making deliveries,” Nuuvali said.

“I’ve had multiple occasions where I had so many deliveries to make that I had no time at all to make any bathroom stops and had to use a bottle,” he added. “They were more focused on getting all the packages delivered than their employees well-being most of the time.”

A driver in Oklahoma who spoke on condition of anonymity so they could speak frankly told Insider it was common to find a bottle of urine when entering a delivery van at the start of a shift.

“I’m not saying that Amazon is encouraging it,” the driver said. “But I almost guarantee any driver that’s been working there long enough has got in a van and saw a translucent bottle filled with something that definitely isn’t apple juice. It’s happened. It happens.”