Amazon drivers say peeing in bottles is an 'inhumane' yet common part of the job, despite the company denying it happens 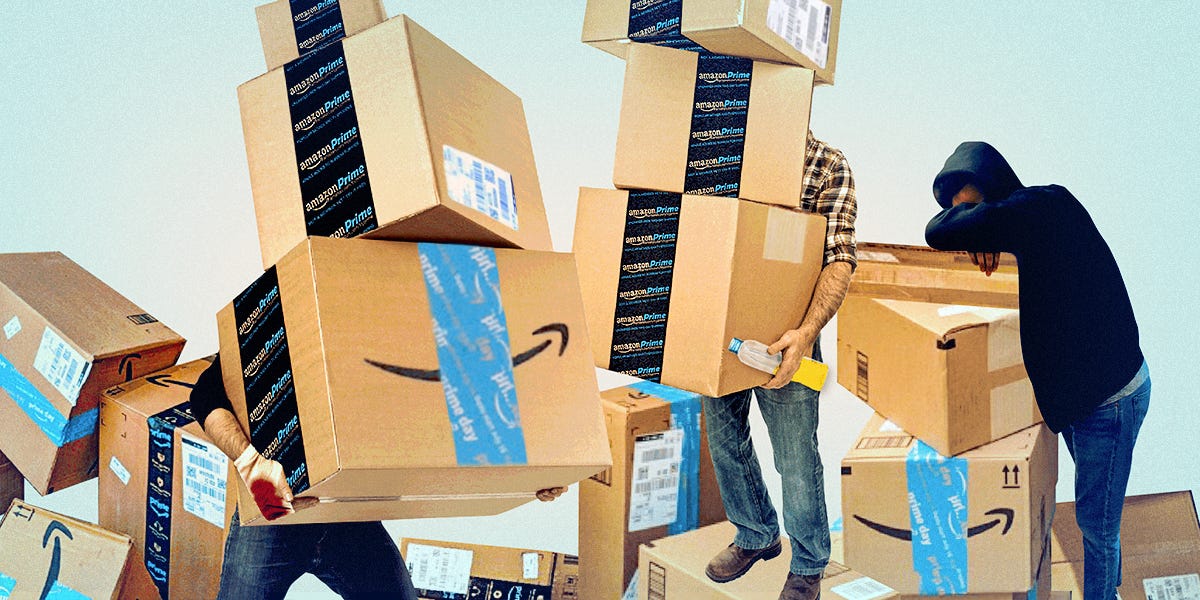 On Wednesday, Amazon tweeted at Democratic Rep. Mark Pocan: “You don’t really believe the peeing in bottles thing, do you? If that were true, nobody would work for us.”

The e-commerce giant was responding to Pocan’s tweet: “Paying workers $US15 ($20)/hr doesn’t make you a ‘progressive workplace’ when you union-bust & make workers urinate in water bottles,” he wrote.

While Amazon denied “the peeing in bottles thing,” five current and former Amazon drivers told Insider that urinating in bottles was part of the job.

“They didn’t really force you to pee in the bottles,” Savannah, who stopped working as a driver for one of Amazon’s third-party delivery-service providers in February, told Insider. “You just didn’t really have time to go to the bathroom.”

Savannah added: “Honestly, I would try to hold it as much as I can. But … there were times when I would personally find a pee bottle in my van because people were lazy and didn’t want to throw it away.”

Savannah and some other drivers who talked to Insider spoke on the condition of anonymity or requested that only their first names be used in order to speak frankly about the situation. Their identities and the fact they worked as Amazon drivers have been confirmed by Insider.

Amazon is known for imposing strict time constraints on drivers and warehouse workers, which some say can have negative consequences. While the company has factored in break times – a 30-minute lunch and two 15-minute breaks – some drivers say they either can’t or don’t want to take them.

“They keep track of your movements – how many times you stop, how fast you drive,” Enrique Sanchez, who worked as a driver for eight months in 2020, said. “Using the restroom in the van is the only option sometimes.”

“It’s a very aggressive company that has generated so much revenue, profits over the last years, decades – but it’s all been at the expense of workers being mistreated,” Sanchez added.

A spokesperson for Amazon was not immediately available to comment.

Reports of bottles of urine have plagued Amazon for years

Insider’s Hayley Peterson reported in 2018 that drivers urinating in bottles was a common practice throughout the system of drivers employed by Amazon and third-party courier companies that work out of Amazon facilities and deliver the bulk of the company’s packages.

“The work is brutal,” a manager of a courier company in New Jersey told Insider at the time. “Drivers have to pee in bottles in their vans all the time.”

Three years later, drivers say not much has changed.

A driver in Oklahoma who works for a third-party delivery service that transports packages on behalf of Amazon told Insider it was common to get into a delivery van at the start of a shift and find a bottle full of pee.

“I’m not saying that Amazon is encouraging it,” the driver said. “But I almost guarantee any driver that’s been working there long enough has got in a van and saw a translucent bottle filled with something that definitely isn’t apple juice. It’s happened. It happens.”

The driver said he had never faced pressure from his company not to take breaks but that he often skipped them to keep his momentum going throughout the day. He typically finds a gas station when he has to use the restroom, he said, but has peed into bottles during his shift when it would have taken upward of 30 minutes to get to a restroom.

“If people saw the bottle, unless they opened it, they wouldn’t even know because I drink Soylent … and the bottles are not translucent,” he said. 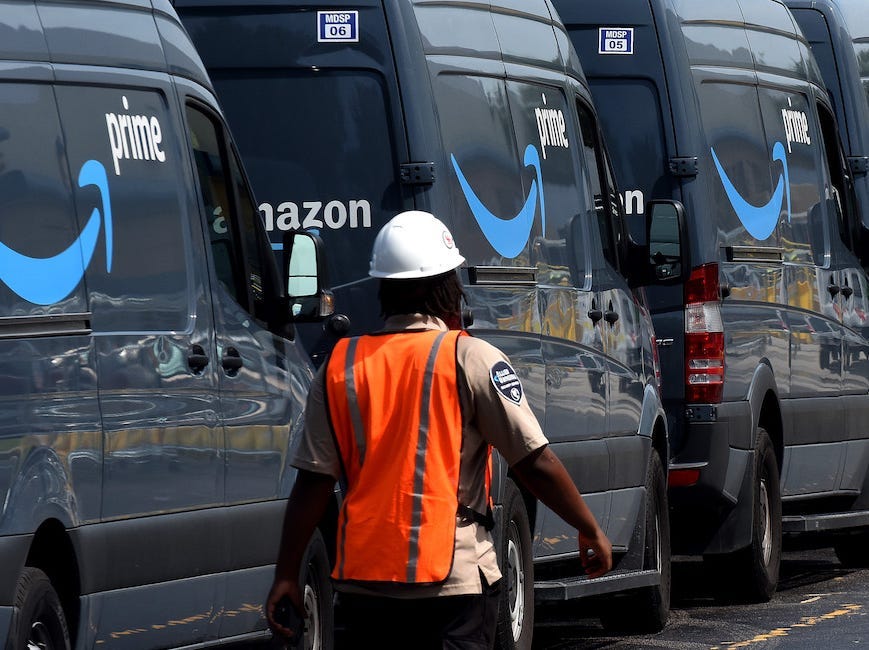 A delivery driver in the Detroit area told Insider that rather than pee inside the vans, she used to hold it to the point of bladder infections. She said she recently decided to purchase a female urinal system, which she brings to work along with a bottle, hand sanitizer, and wipes.

She described getting her period at work as “a nightmare” and said she had had several female colleagues call her crying because they leaked through their clothing while working.

She added: “It’s inhumane, to say the least.”

Even Amazon drivers who have primarily positive things to say about the company said peeing in bottles was a common practice.

Art Velasquez, a former driver, said he thought Amazon was generally a great company. But during the pandemic, “it’s rare to find any open public bathrooms, and most places denied us access to restrooms,” Velasquez added.

“Can’t really complain much besides that they’re denying these allegations,” Velasquez said.

The Oklahoma delivery driver said he was happy with his job and liked the company. But he said Amazon’s system was set up to shift responsibility onto the third-party courier companies, which can sometimes pressure workers to move faster and skip breaks.

“There’s a lot of problems with the system, but it comes back to the system being set up for Amazon to push off as much responsibility or liability for anything that goes wrong onto somebody else, whether it’s the DSP owners or the drivers themselves,” he said.

There is extensive evidence of Amazon drivers peeing in bottles

Amazon’s tweet on Wednesday set off a wave of backlash, in part, because the bottles of urine have been so widely reported.

On Thursday, Vice published an article with the headline: “Amazon Denies Workers Pee in Bottles. Here Are the Pee Bottles.”

I’ve found piss bottles from other drivers, but now from the warehouse too… from r/AmazonDSPDrivers

Don’t have a pee bottle ???? desperate times call for desperate measures. from r/AmazonDSPDrivers

I’ve been saving my vitaminwater to repurpose as piss bottles. I can’t wait until next week… I’ll be on vacation then starting a new job. from r/AmazonDSPDrivers

Documents obtained by The Intercept showed Amazon was aware that drivers were urinating and defecating in public on the job and listed the practices as recurring infractions in a January document.

“The practice, these documents show, was known to management, which identified it as a recurring infraction but did nothing to ease the pressure that caused it,” The Intercept’s Ken Klippenstein reported on Thursday. “In some cases, employees even defecated in bags.”

Celine McNicholas, the director of government affairs at the Economic Policy Institute, said Amazon was denying the “pee bottle thing” as part of a public-relations push to be seen as a progressive employer, while it attempts to shut down a union drive in Alabama.

“I think it is probably the only play that they have – to say this is not the reality,” McNicholas said. “Because the reality is shameful and disgusting.”

There are also reports of Amazon warehouse workers urinating in bottles

There have also been reports of Amazon warehouse workers peeing in bottles.

In 2018, a survey of 241 Amazon warehouse employees in England found that 74% said they avoided going to the bathroom at work. Employees said they were scared of being fired or missing their target if they used the toilet.

About the same time, James Bloodworth, an undercover reporter, said employees had a “toilet bottle” system in place at the warehouse where he worked in the UK.

“For those of us who worked on the top floor, the closest toilets were down four flights of stairs,” Bloodworth told The Sun. “People just peed in bottles because they lived in fear of being ­disciplined over ‘idle time’ and ­losing their jobs just because they needed the loo.”

While Amazon said “nobody” would work for the company if people had to pee in bottles, the problem appears to be a common one. A November 2019 blog post on the website for the Centers for Disease Control and Prevention said, “Many workers in a wide range of industries and occupations say they cannot take the bathroom breaks they need.” It cited surveys of teachers, poultry-processing workers, nurses, bus drivers, and taxi drivers.

Savannah said Amazon did not understand what drivers and other workers go through on the job.

“They don’t see how hard it is – the weather we deal with, these bathroom situations, lunch breaks,” she said.

Efforts to unionize an Alabama warehouse offer Savannah some hope that things can change for Amazon workers. She said she hoped unionizing would make the company understand what warehouse workers’ and drivers’ jobs require.

“That way, Amazon can see what we really go through,” Savannah said.