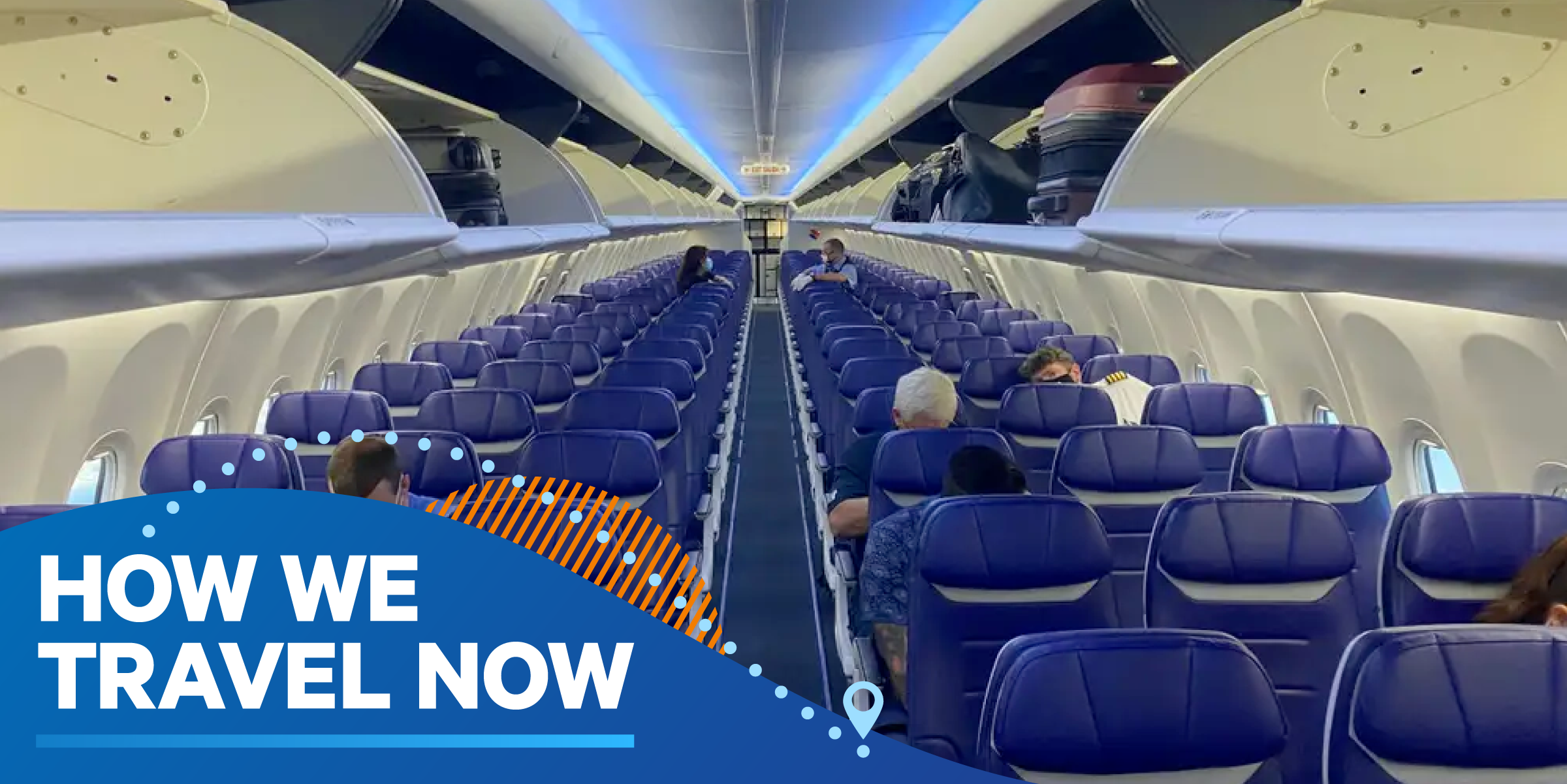 Thomas Pallini/Business Insider; Samantha Lee/Business InsiderTravellers taking to the skies this holiday season will be greeted by an entirely new travel experience, one unlike anything seen before the pandemic.

The upcoming holiday travel season will likely see an influx of travellers taking to the skies, many for the first time since the pandemic impacted travel in March.

The days surrounding both Labour Day and the Fourth of July saw jumps in daily passenger numbers, according to the Transportation Security Administration, as Americans settle into the pandemic and grow more comfortable with air travel. The peak travel season for Thanksgiving and Christmas travel should be no different as historically among the busiest travel times of the year.

Those returning from their aerial hiatus, however, will quickly notice that the new realities of flying are unlike any past travel experience as both airlines and airports navigate their way through this health crisis.

After experimenting with various, most major US airlines have settled into a new normal that includes significantly varied social distancing policies, reduced in-flight offers, and flexible booking policies aimed at winning back travellers.

Travellers now have to weigh the importance of health and safety when booking a ticket while also ensuring compliance with local quarantine laws. With still so much uncertainty surrounding this pandemic, a destination could fall prey to an outbreak at a moment’s notice and render travel unsafe.

Here’s what flyers need to know when planning travel.

Choosing your airlines and airports wisely 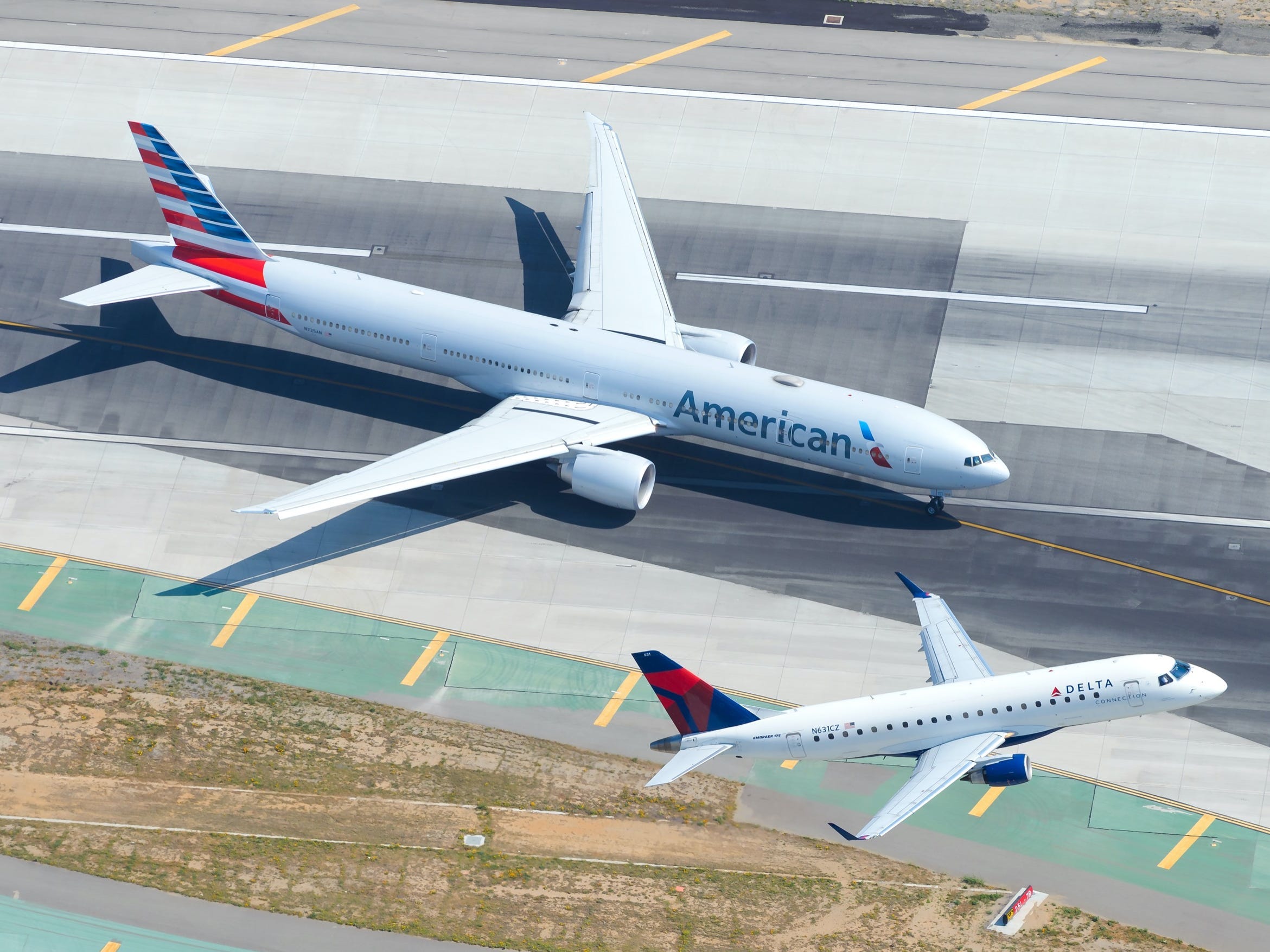 Thiago B Trevisan / Shutterstock.comEach airline has its own social distancing policy which travellers should account for when booking a flight.

Every traveller has their own motivations when booking an airline ticket but should now factor in health and safety to the decision making process. With all major US airlines now requiring face coverings when flying, safety is now largely measured by whether an airline is blocking middle seats or limiting flight loads to achieve social distancing.

Delta Air Lines has committed to keeping its middle seat policy until March 30, 2021, well beyond the Christmas and New Year’s rush, while Alaska Airlines is only committing to block middle seats or limit flight loads until January 6, 2021, for now. JetBlue Airways is also only blocking seats at 70% until December 1, followed by an 85% cap through January 7, 2021.

United Airlines and American Airlines, as well as the ultra-low-cost airlines including Frontier Airlines, Allegiant Air, Sun Country Air, and Spirit Airlines, are not blocking seats or limiting flight loads.

Most major US airports are also requiring face coverings to be worn by travellers but it’s not yet universally mandated by law. Flyers booking connecting flights should also ensure that their connecting airports require face coverings, as well.

Air travel rating firm Skytrax has also recently started rating airports based on their COVID-19 preparedness that passengers can use as a resource.

The days of empty flights are over

The early days of the pandemic saw flights depart with little to no passengers but those days are long gone. Though daily traveller numbers are still around two million less from 2019 levels, airlines have adjusted their flying schedules and consolidated flights to largely ensure flights don’t depart empty.

Flyers should expect crowded flights, especially on airlines that aren’t blocking middle seats, though some airlines are offering free changes if a flight is too full. The big three airlines – American Airlines, Delta Air Lines, and United Airlines – have all committed to letting passengers change their flights if they feel uncomfortable with the number of passengers onboard, though a reduced flying schedule can mean fewer alternative options.

October 1 also saw the end of CARES Act provisions that require airlines to maintain their route networks leading to a decrease in connectivity across the country. American Airlines and Delta Air Lines have both announced route cuts to smaller cities in their networks, which are likely to continue if the federal government doesn’t pass another stimulus package.

Airlines have also furloughed or parted ways with tens of thousands of employees in recent months, including pilots, so travellers should expect less frequent options when travelling.

Not all airlines are offering free changes 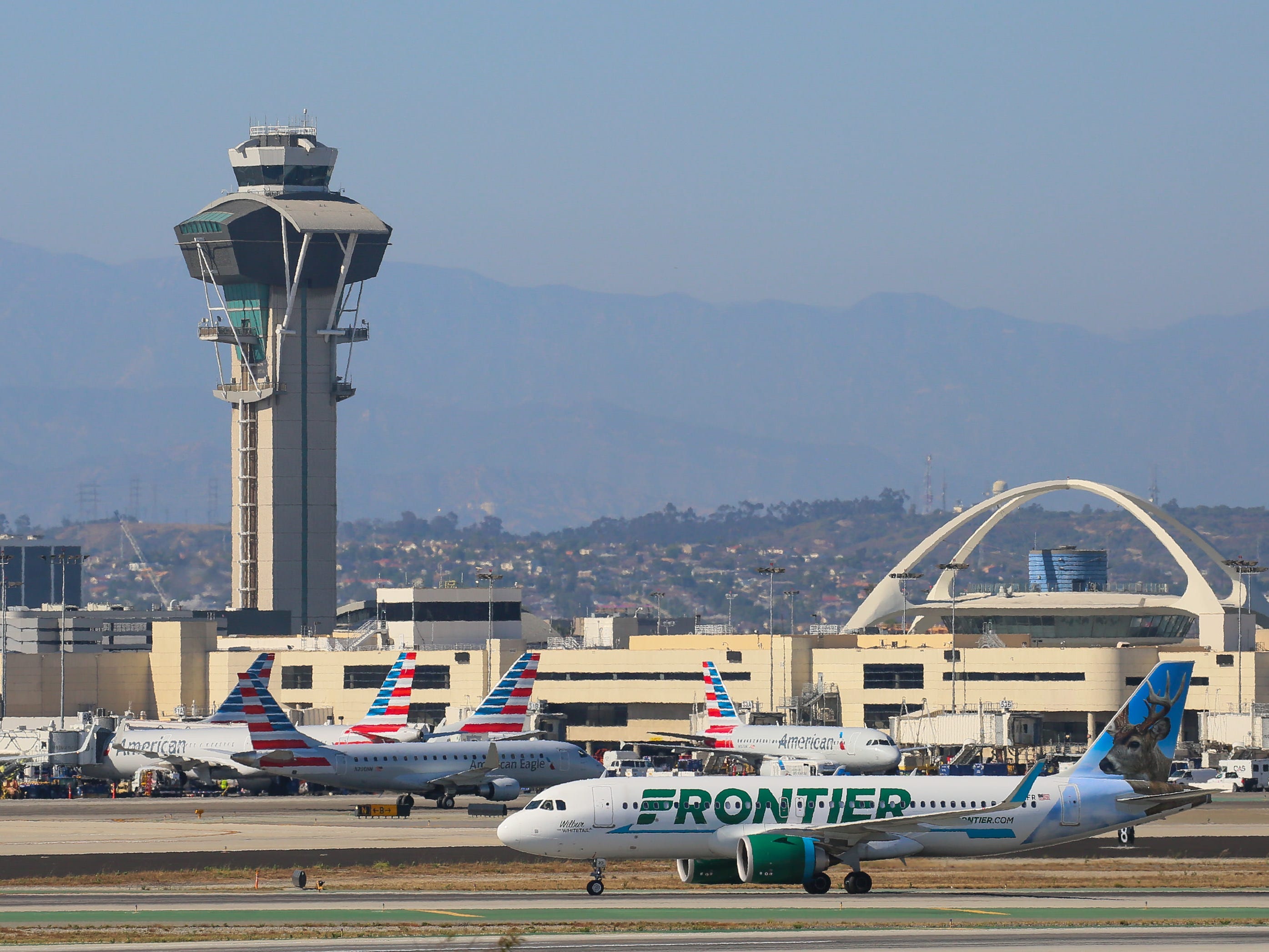 FG/Bauer-Griffin / Contributor/Getty ImagesAirlines are hoping that free changes will instill confidence and get flyers back in the air but not every airline’s policy is so generous.

American Airlines, Delta Air Lines, Alaska Airlines, and United Airlines have all eliminated change and cancel fees for domestic flights, giving passengers an additional modicum of flexibility when booking holiday travel. JetBlue Airways has also removed change fees for bookings made until February 28, 2021, and Southwest Airlines has always offered free changes and cancellations for all flights.

But not all airlines are being as generous and ultra-low-cost carriers Sun Country Airlines, Frontier Airlines, Spirit Airlines, and Allegiant Air are each taking a different approach.

Sun Country Airlines is allowing free changes as long as they’re made 60 days or greater from the flight’s scheduled departure, while Frontier Airlines is doing the same but offering additional flexibility for those who have booked tickets before January 7, 2021. Spirit Airlines is also waiving change and cancel fees for flyers who have booked by December 31.

Even with free changes, flyers will still have to pay the fare difference for the flight to which they change and cancelling a ticket won’t likely result in a refund and a travel voucher or credit will be issued instead. Travellers should check with their airlines to see exactly what they’re entitled to before booking.

Check your home and arrival state’s quarantine or testing restrictions 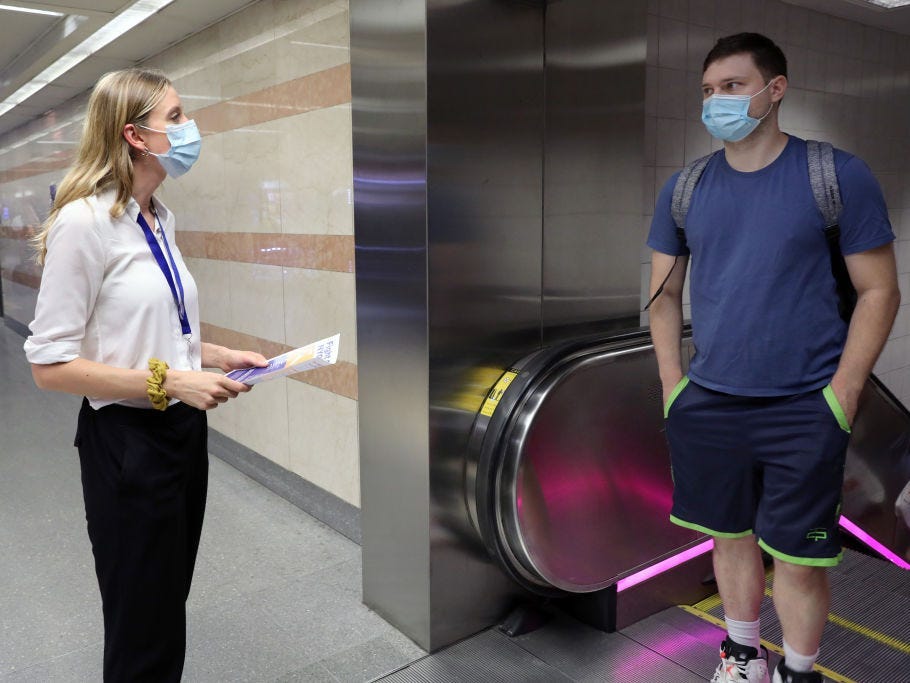 Spencer Platt/GettyStates across the country are requiring quarantines for travellers returning from high-risk states.

Americans are not only largely restricted when travelling internationally but also when travelling within the US. States across the country are implementing mandatory 14-day quarantines for travellers upon arrival if they are coming from high-risk states.

Every state is handling the pandemic differently and outbreaks often come unexpectedly so travellers should keep this in mind when booking travel and be prepared for a potential quarantine upon arrival or upon return if their destination state experiences an outbreak. Airlines will likely not give a refund for travel just because a traveller’s destination is added to a state’s quarantine list and those who can’t accept a potential quarantine should consider a refundable ticket or not book travel at all.

Some states will waive quarantine requirements if a negative COVID-19 test is received after arrival back in the same. A growing number of airports across the country are establishing testing facilities including Tampa International Airport and Hartford, Connecticut’s Bradley International Airport.

Use schedule changes, delays, and cancellations to your advantage 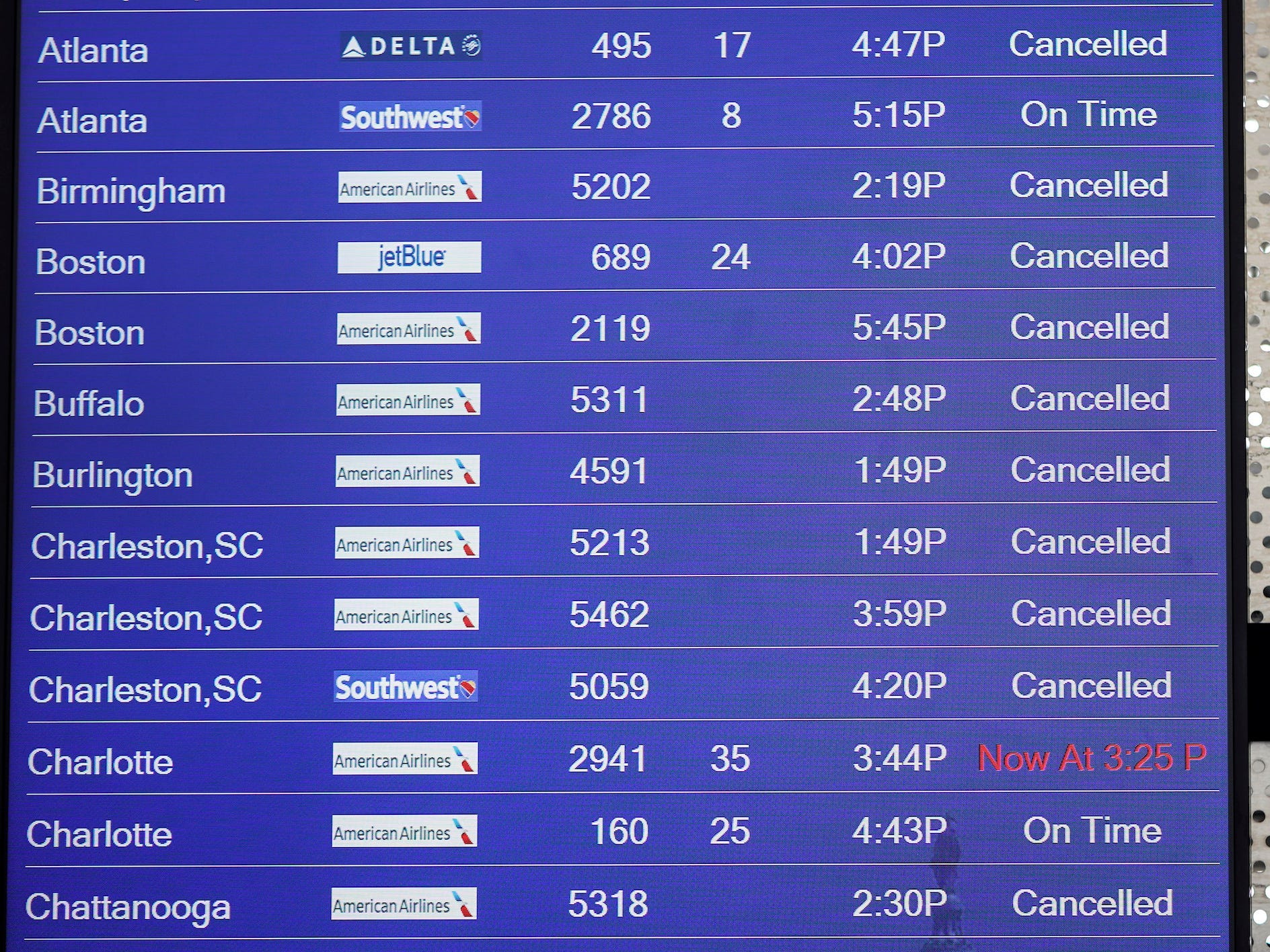 Joshua Roberts/ReutersA schedule change can be used to secure a refund for a flight if the change is great enough.

Airlines have been trimming their flying schedules as demand has dropped off for travel, leading to cancelled flights and schedule changes, where an airline will change a flight’s departure or arrival time. Travel changes like these may come at short notice as JetBlue Airways CEO Robin Hayes recently explained that his airline will make the determination to cancel a flight only four days before its scheduled departure.

If a flight is cancelled or suffers a schedule change, flyers can use that to their advantage by making changes or requesting a full refund without being charged a fee. Airlines can typically offer better routings or flight times that better suit the traveller when these disruptions occur.

Each airline has its own rules when it comes to schedule changes and what passengers are entitled to so passengers should check with them to find the specifics for each.

Travellers seeking to cancel a flight but don’t have cause for a refund should also wait until a few days, if not hours, before a flight is scheduled to depart to see if a delay or cancellation will occur, which could then entitle them to a refund.

Bring a snack, or two, and don’t forget your mask 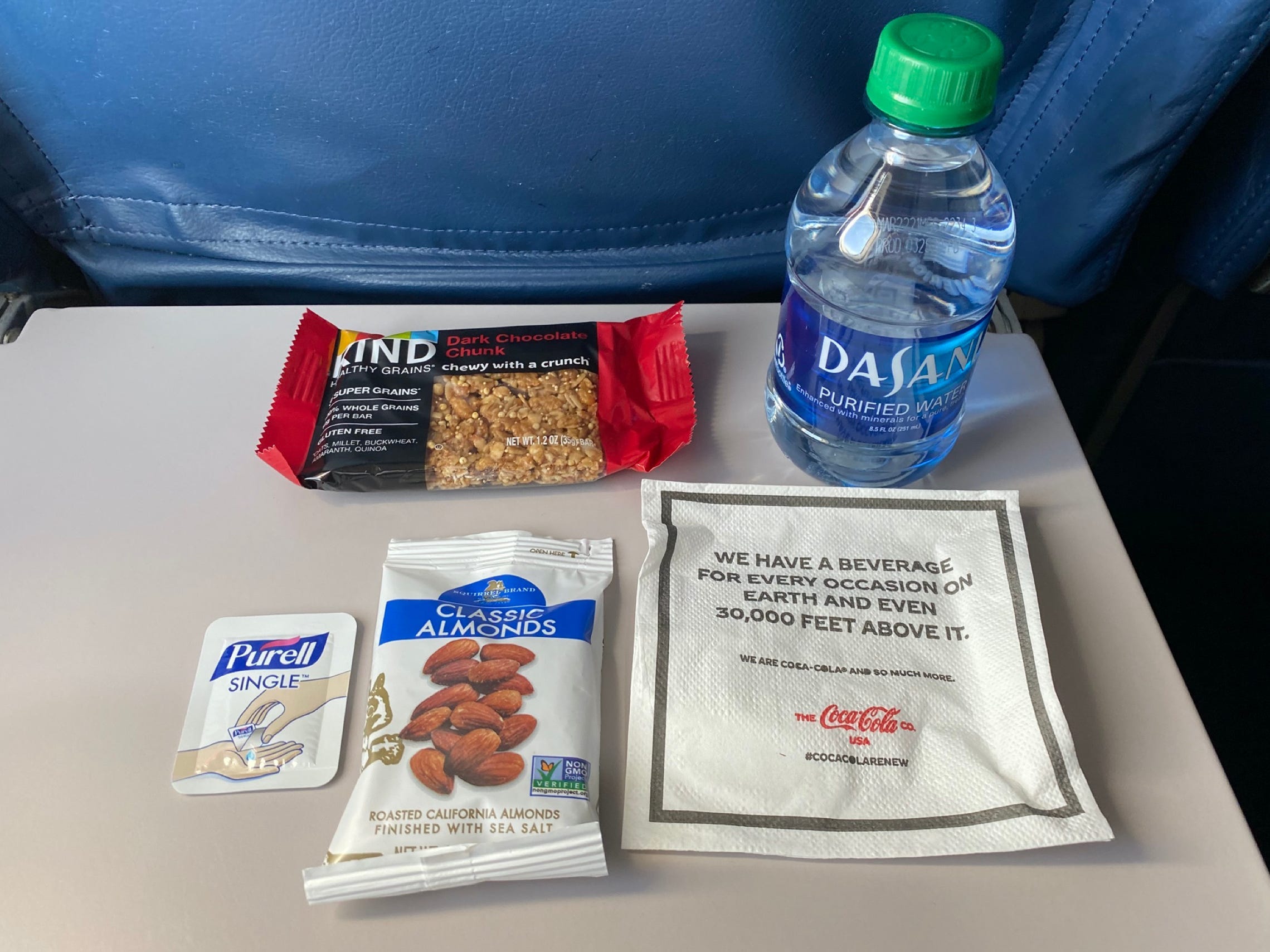 Thomas Pallini/Business InsiderIn-flight snacks and beverage offerings vary by airlines, with some cutting the service completely on shorter flights.

The normal creature comforts of flying are long gone as airlines have largely scaled back on in-flight beverage and snack services, with some even doing away with alcohol sales. Amenities like pillows and blankets have also been tossed to the wayside as a way of limiting the potential spread of the virus.

Flyers should plan ahead, especially on longer flights, by stocking up on snacks to bring on the plane. Experts also say that pillows and blankets are fine to bring from home, as long as they’re only being used by one person.

Other essential travel gear recommended by medical experts includes face coverings (required by all major US airlines and a growing number of airports), hand sanitizer, and disinfecting wipes.