A world on fire: Here are all the major protests happening around the globe right now 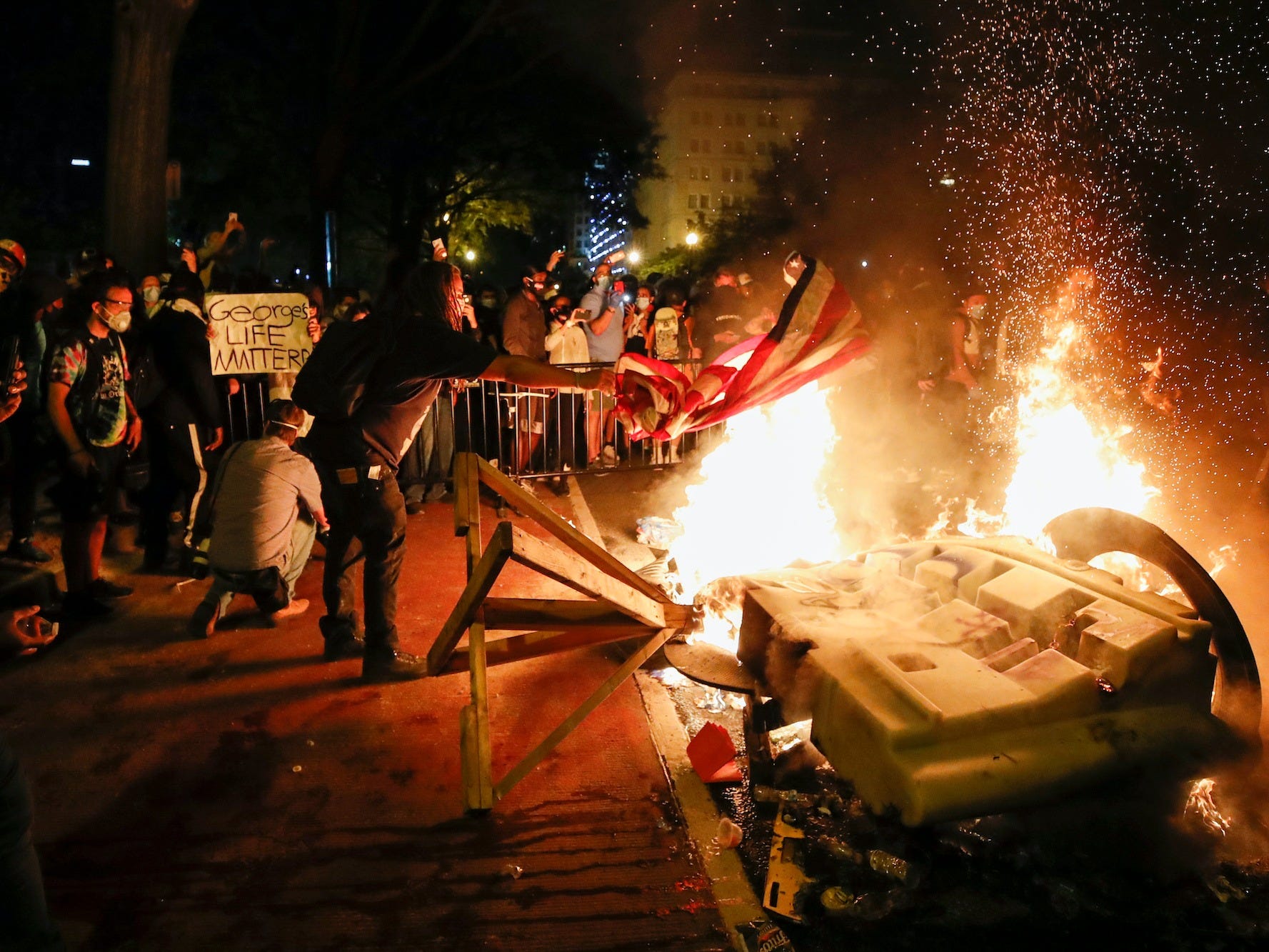 Alex Brandon/AP PhotoDemonstrators start a fire as they protest the death of George Floyd, Sunday, May 31, 2020, near the White House in Washington.

From the Civil Rights Movement’s the March on Washington to the Arab Spring of early 2000s, protests have left powerful marks upon the world.

Historically, protests have served as an outlet for marginalised groups to articulate their frustrations – and make their demands known. One such example is New York’s Stonewall riots, which kicked off the modern Pride movement and mainstream LGBTQ visibility.

Today, protests like those over the death of George Floyd are ongoing, even in the midst of a global pandemic. Protesters around the world are calling for police reform and an end to systemic racism. Several cities have reported violence against reporters and protesters, and many have imposed curfews and boarded up businesses following accounts of looting.

Ivan De Luce contributed to a previous version of this article.

In the United States, protests following the death of George Floyd have lasted for over a week. 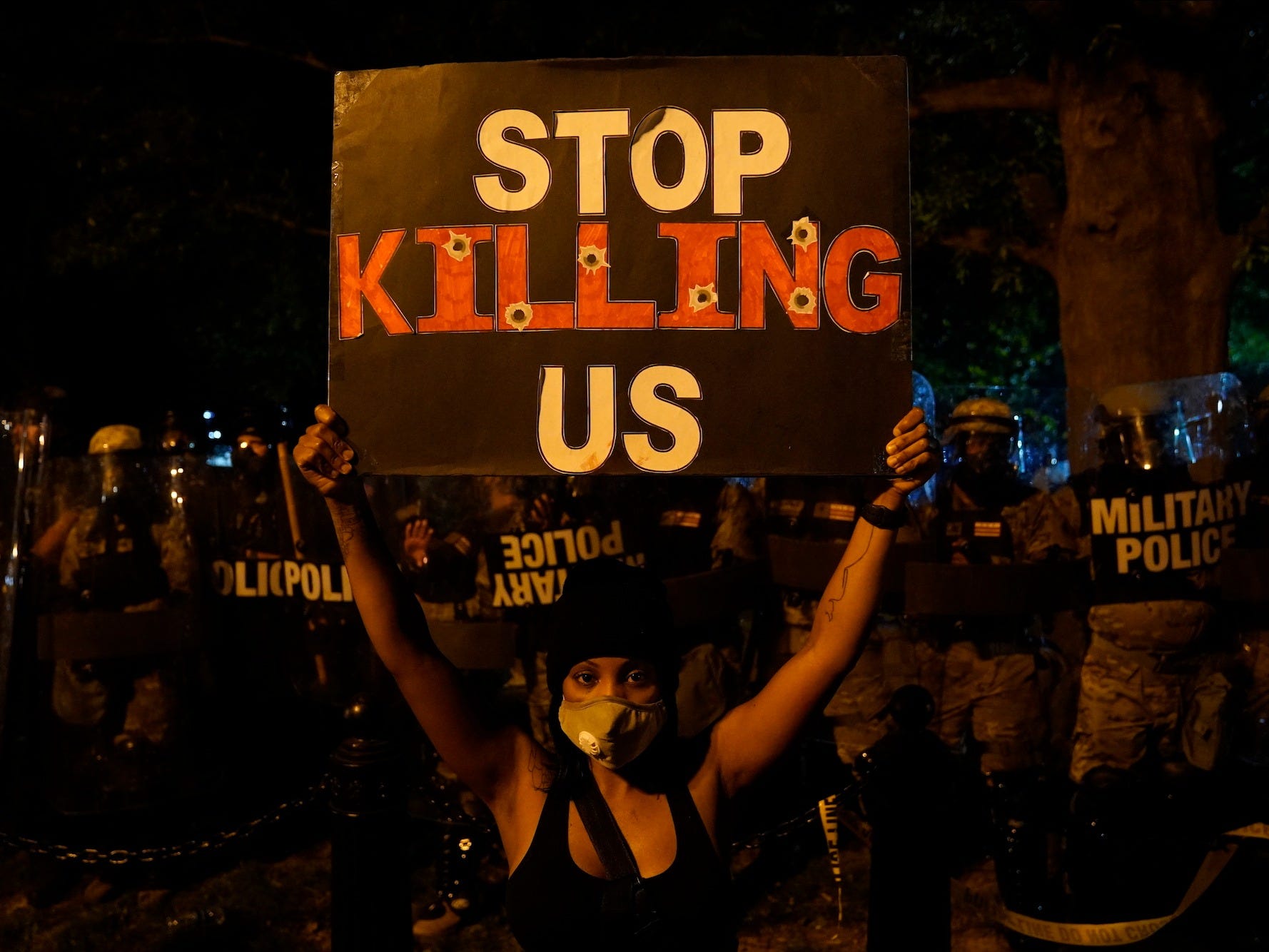 Associated Press/Evan VucciA demonstrator holds a sign during a protest the death of George Floyd, Saturday, May 30, 2020, near the White House in Washington.

Protests over the death of George Floyd continue throughout the country. On May 25, Floyd, a black man, died after Minneapolis police officer Derek Chauvin kneeled on his neck for close to nine minutes.

The next day, protests began in Minneapolis; by May 27, they had spread across the nation.

In reaction to the protests, governors and mayors around the country have set curfews. Police have been criticised for their violent response to protesters.

On Monday, peaceful protesters were cleared out of a park in Washington, D.C., with tear gas and rubber bullets so President Donald Trump could have his photo taken in front of a church.

Thousands of protesters from around the world – from the UK to New Zealand – have demonstrated in solidarity.

In the Philippines, protesters are sounding the alarm over a new anti-terror bill that some fear will suppress free speech. 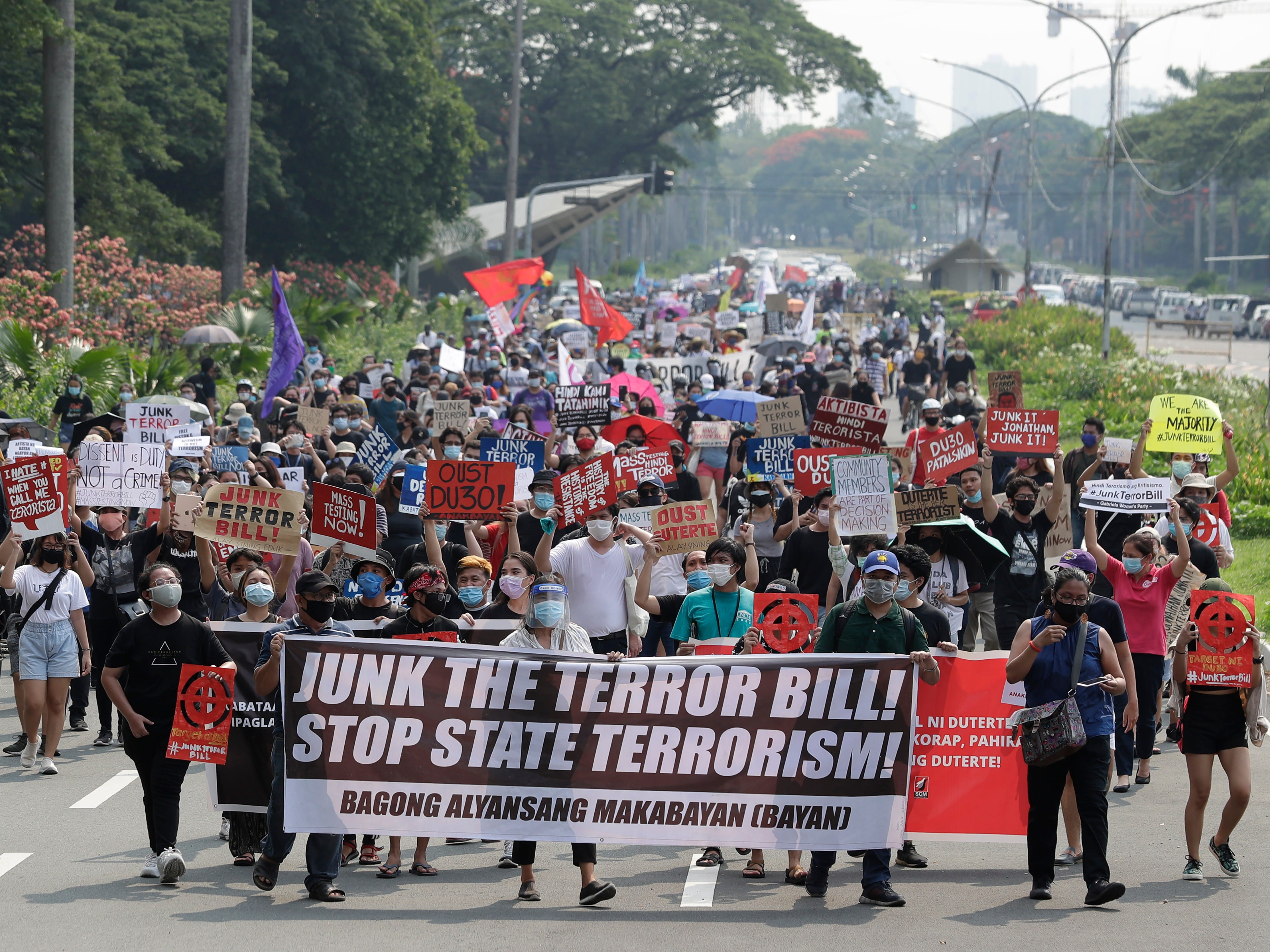 Protesters have taken to the streets over a new anti-terror bill. The Anti-Terrorism Act of 2020, which has been heavily pushed by President Rodrigo Duterte, would broaden the definition of terrorism and give police additional arrest and surveillance powers.

However, as Reuters reports, the bill’s opponents fear it may be used to tamp down free speech.

“We think this is against the constitution,” human rights lawyer Jose Manuel Diokno told Reuters. “Given the broader definition of terrorism, the administration’s critics could be tagged as suspected terrorists.”

Protests in Hong Kong have reignited after Beijing set out to impose national security legislation. 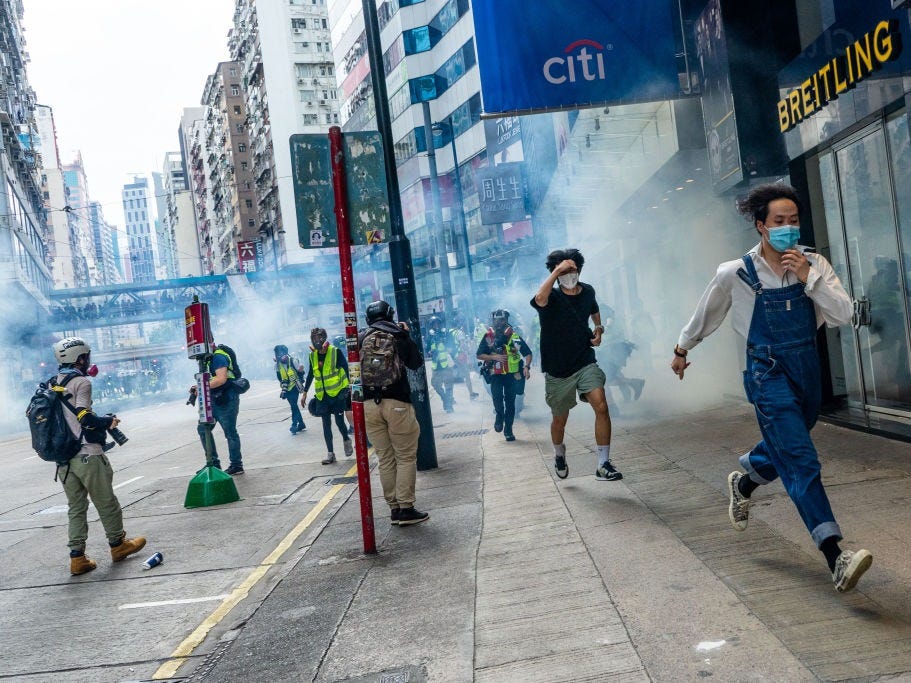 Protests in Hong Kong have been ongoing since June 2019. The protest started as a rallying cry against a new law that would try Hong Kong residents in mainland China, but became a pro-democracy movement.

In May, Beijing said it would try to impose national security legislation on Hong Kong. Thousands of protesters took to the streets over that legislation; police met with tear gas and water cannons. On May 28, China approved the legislation, and United States President Donald Trump began the process of ending special US treatment toward Hong Kong.

In Toronto, the death of Regis Korchinski-Paquet while police were in her apartment led to protests against racial inequity. 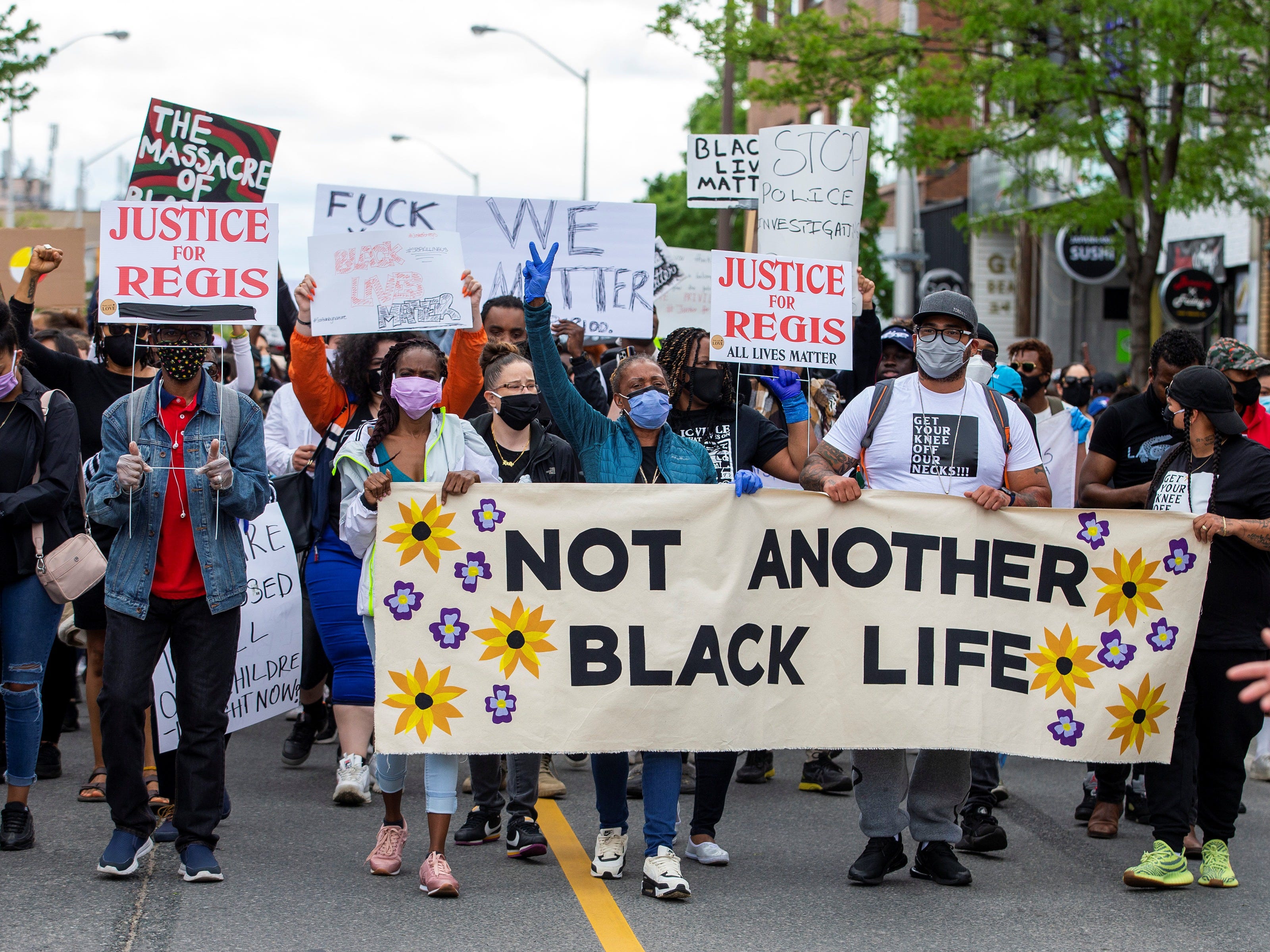 REUTERS/Carlos OsorioProtesters march to highlight the deaths in the US of Ahmaud Arbery, Breonna Taylor and George Floyd, and of Toronto’s Regis Korchinski-Paquet, who died after falling from an apartment building while police officers were present, in Toronto, Ontario, Canada, on May 30, 2020.

In Toronto, protesters rallied following the death of Regis Korchinski-Paquet. Korchinski-Paquet, a black woman, died after falling from the balcony of her 24th-floor apartment. She had called the police for help, and they were in her apartment at the time of her fall.

“The family strongly believes that Regis’ death could have been prevented,” said a statement from her family, according to CBC/Radio-Canada.

Israelis are protesting the killing of a teacher at the hands of Israeli police and are rallying in solidarity with United States protesters. REUTERS/Nir EliasPeople hold placards as they protest in solidarity with those in the United States protesting police brutality and the death in Minneapolis police custody of George Floyd, in Tel Aviv, Israel June 2, 2020.

Protests against police brutality have also flooded the streets in major cities across Israel, from Bethlehem to Haifa, after the recent killing of Eyad Hallaq by Israeli police. Hallaq, a 32-year-old Palestinian man with autism, was unarmed when he was shot by two officers near the special-needs school in Old City Jerusalem where he worked.

One of the officers, whose identity was not made public, claimed that he thought Hallaq was a “terrorist” because the man was wearing gloves.

In Tel Aviv, several hundred protesters gathered to show support against the killing of George Floyd, bearing signs that read “Black Lives Matter” and leading chants of “Say their names.”

In Brazil, residents have turned out to protest police brutality and to weigh in on ongoing investigations against the country’s president. 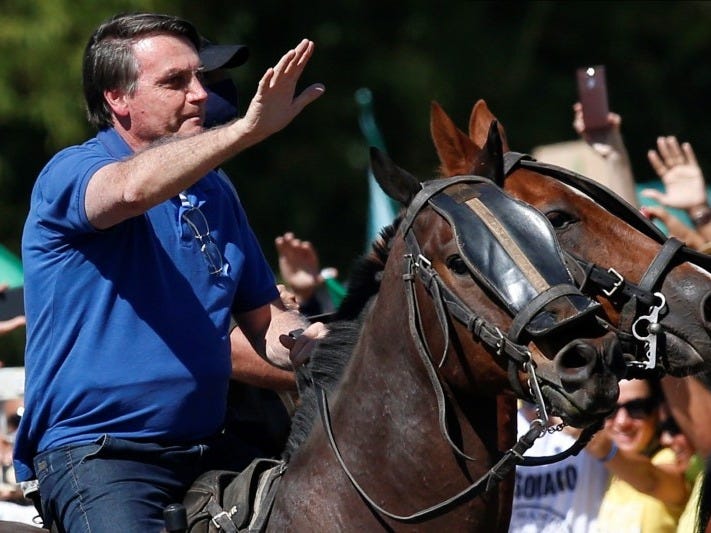 REUTERS/Ueslei Marcelino/File PhotoBrazil’s President Jair Bolsonaro rides a horse during a meeting with supporters protesting in his favour, amid the coronavirus outbreak in Brazil on May 31, 2020.

Police in Brazil used tear gas and rubber bullets to disperse Brazilian demonstrators protesting against police brutality in Rio de Janeiro and Curitiba over the weekend of May 29, in solidarity with US movements.

Brazil, where over half the population identifies as black or multiracial, has itself had a murky history with racism and discrimination. Citizens are no strangers to the excessive use of police violence that often results in the deaths of black children.

Brazilians have also been divided over either support or disagreement with President Jair Bolsonaro’s lockdown restrictions aimed to temper the spread of the coronavirus, which has led to over 28,000 deaths in the country. Bolsonaro, according to Reuters, has been endorsing weekly protests against the country’s top court. That court authorised an investigation into his alleged interference with police appointments. 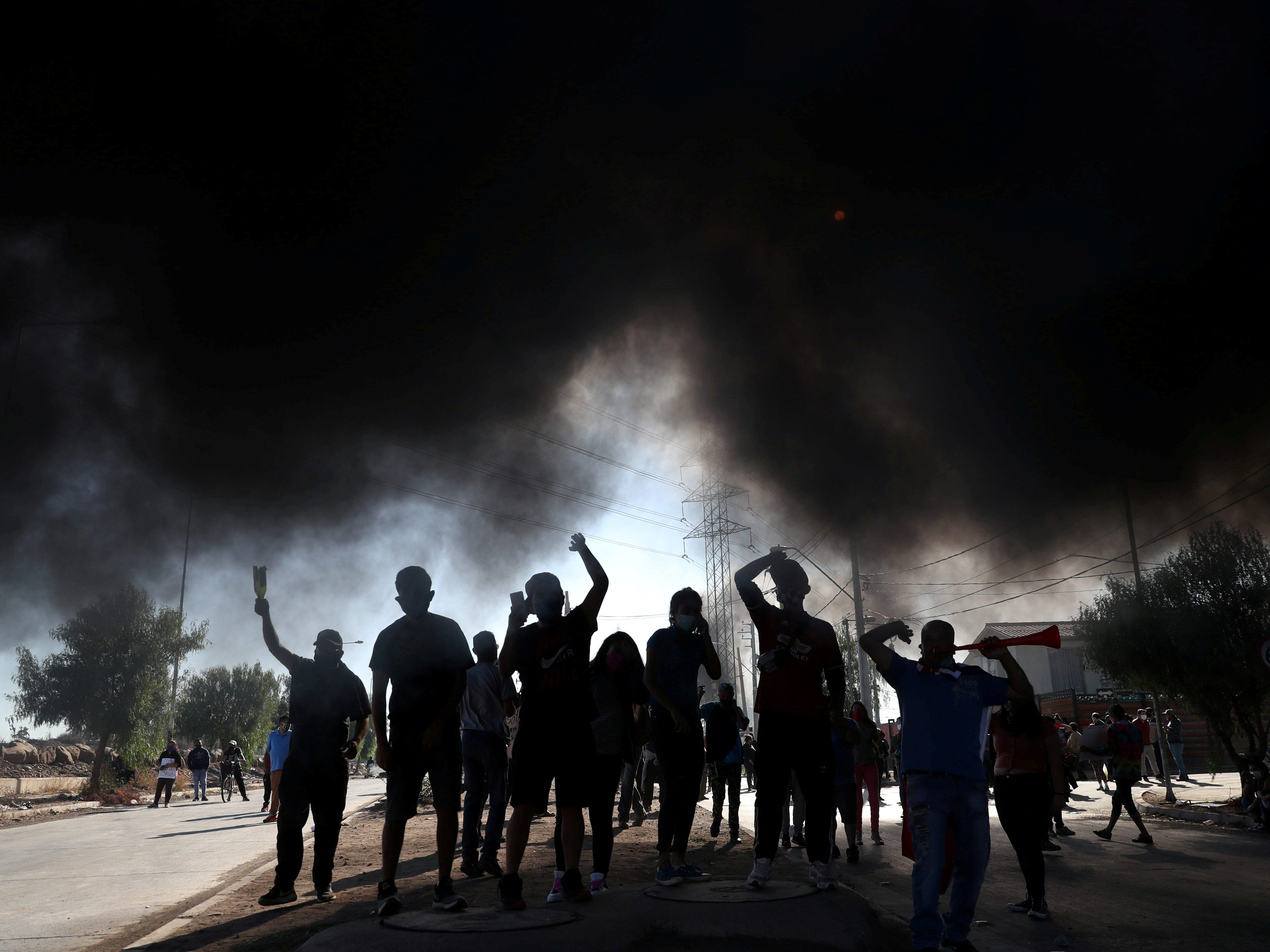 REUTERS/Ivan AlvaradoPeople shout slogans as they protest to request food parcels from the government during a general quarantine amid the spread of the coronavirus at the ‘Puente Alto’ area in Santiago, Chile, on May 25, 2020.

Since May, Chileans have been protesting against coronavirus-related lockdowns across the country as well as food shortages in the capital city of Santiago.

President Sebastian Pinera announced on May 18 that he would oversee the delivery of “2.5 million baskets of food and cleaning supplies directly to homes by late this week or early next” in efforts to provide relief to the nation’s most impoverished neighbourhoods, according to Reuters.

As of June 2, The Santiago Times reported that only 227,842 baskets of supplies had been distributed so far throughout the country, and COVID-19 cases are still on rise.