All 50 states are partially reopened, and a masked nation holds its breath 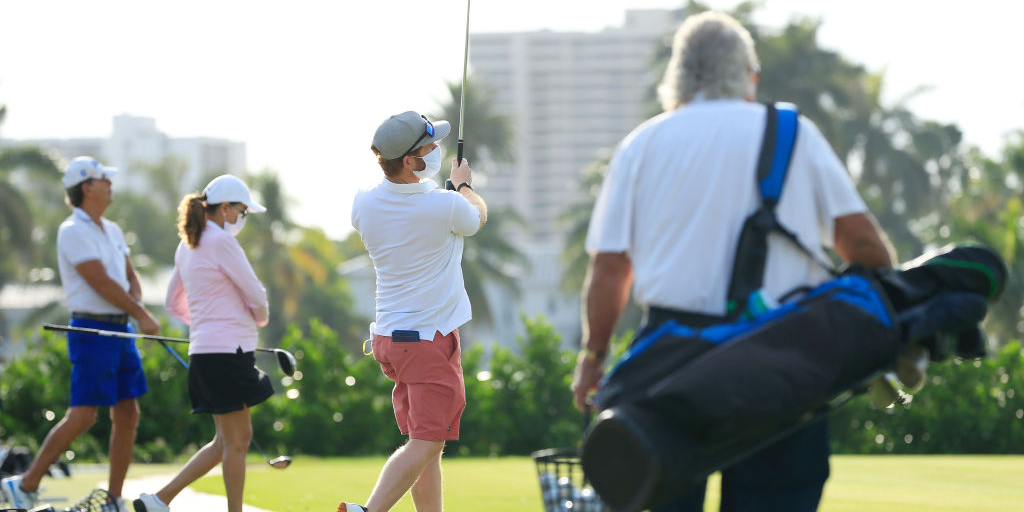 Cliff Hawkins/Getty ImagesPlayers wearing face masks warm up on the range at the Miami Beach Golf Club on April 29, 2020 in Miami Beach, Florida. The city of Miami Beach partially reopened parks and facilities including golf courses, tennis courts and marinas as it begins easing restrictions made due to the COVID-19 pandemic.

Wednesday is the first day in two months that all 50 states have been, at least partially, reopened.

Stay-at-home orders started to be announced in mid-March, beginning with California, and then swept the nation.

The goal of the lockdowns was to “flatten the curve” by slowing the rate of people falling ill from the novel coronavirus.

In late April, some states – like Georgia, Florida, and Texas– led the charge in lifting some restrictions on restaurants, grooming businesses, and retail stores. By Wednesday, all 50 states have made some move toward reopening their economies.

Connecticut was the last to do so, by allowing the reopening of outdoor dining areas, offices, retail shops, and some attractions with social distancing regulations and capacity limits.

“There is a balance and there’s nothing that’s risk free,” Connecticut Gov. Ned Lamont told ABC 7. “I think we can proceed with very thoughtful bases with those businesses that are least like to be dangerous, most likely to have a real economic value for the state. and I’m looking forward. I think this is a good day for the state.”

Since the first case of the coronavirus in the US was reported in January, there have been more than 1.5 million confirmed cases and at least 92,066 deaths in the country, according data from Johns Hopkins University.

States are bracing for an increase in infections

While the reopening plans in the states have capacity limits and sanitation regulations in place, the country is bracing for at least a small resurgence in cases in some areas now that more people are out and about.

In Texas, for example, COVID-19 cases have continued to surge in the two weeks since the state’s stay-at-home order expired. The state reported its highest single-day increase in coronavirus cases over the weekend.

The Texas Department of State Health Services announced on Saturday that 1,801 new people had been diagnosed with COVID-19 in the past 24 hours.

That surge was partially caused by an outbreak in the Panhandle, where more than 700 cases attributed to local meatpacking facilities were recorded in the city of Amarillo, the Houston Chronicle reported.

Texas Gov. Greg Abbott hasn’t allowed the rise in cases slow his plan to reopen the state, and still intends on increasing capacity limits at reopened restaurants from 25% to 50% on Friday.

The governor knew that reopening establishments would likely lead to a rise in cases. In a private call with lawmakers earlier this month, Abbott acknowledged that “every scientific and medical report shows” that reopening will lead to more transmissions.

“The more that you have people out there, the greater the possibility is for transmission,” Abbott said during the call, which the Daily Beast obtained. “The goal never has been to get transmission down to zero.”

It remains unclear how serious a resurgence would prompt states to declare another stay-at-home order or go back a step in their plans to reopen.

At least six other countries that had moved toward reopening have had to reverse some efforts after discovering a spike in infections.

China, Germany, Iran, South Korea, Lebanon, and Saudi Arabia have all reimposed partial new measures. In many cases, the renewed lockdowns are limited to various districts where the virus has spiked, or limited to particular aspects such as travel restrictions or a curfew.