Alex Trebek has hosted more than 8,000 episodes of 'Jeopardy!' over three decades. Here's a look at the 7-time Emmy Award winner's life, from his start as a Canadian sports announcer to his cancer diagnosis. 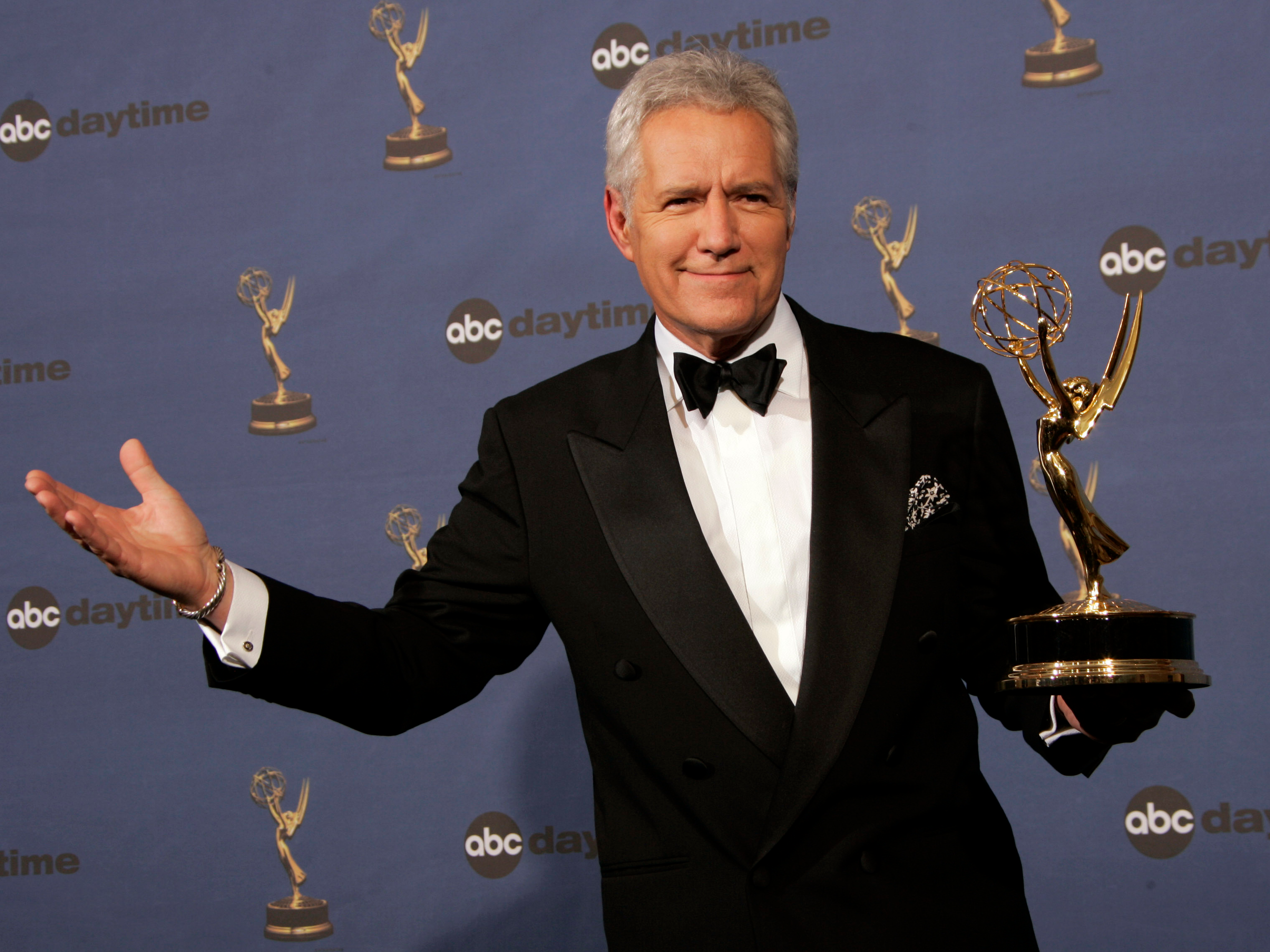 Alex Trebek has been the host of “Jeopardy!” for 36 years – that amounts to over 8,000 hosted episodes – but he’s been at the helm of game shows for even longer.

After starting his television career at the Canadian Broadcasting Corporation (CBC), Trebek went on to host dozens of shows along with securing a recurring role as the host of game show “Jeopardy!” in 1984. The show originally debuted in 1964.

Despite rumours of his retirement, Trebek’s contract is effective until 2022, which was reaffirmed when he announced his diagnosis of stage 4 pancreatic cancer last March. At the time, he said he planned to beat the disease, as he was in a contract to host “Jeopardy” for an additional three years.

On Wednesday, in a video shared on “Jeopardy!” social media accounts, Trebek provided an update on his health. “The one-year survival rate for stage 4 pancreatic cancer patients is 18%,” he said. “I’m very happy to report I have just reached that marker.”

Trebek also said that he and his oncologist are working to make sure he lives to see another year: “If we take it one day at a time with a positive attitude,” he continued, “anything is possible.”

Amidst a long list of lifetime achievements, Trebek holds the record for being the longest game show host, along with seven total Emmy Awards. He has also made countless cameos on popular television shows, from “Golden Girls” to “How I Met Your Mother.”

Keep reading for a look at the beloved host’s career, from his CBC days to his recent hosting of an exciting “Greatest of All Time” tournament, featuring three of the most recognisable “Jeopardy!” contestants.

Canadian television personality Alex Trebek has been a game show host for over 50 years. 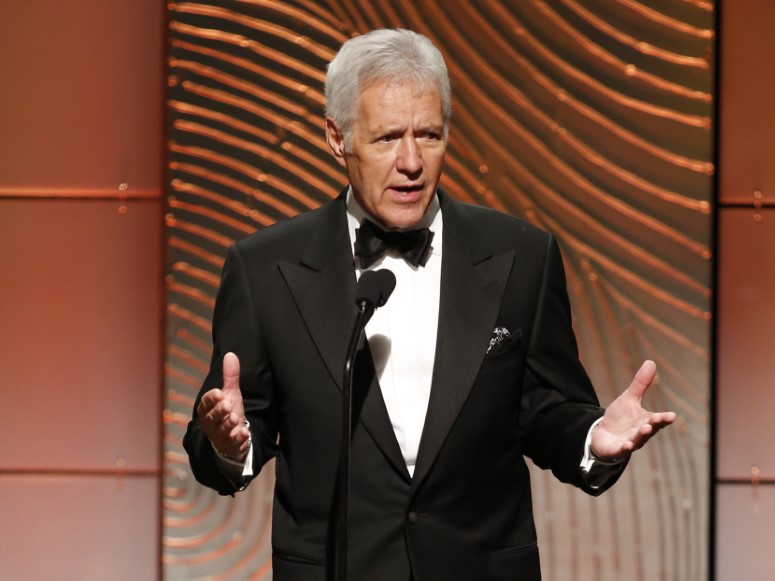 79-year-old Trebek grew up in Sudbury, Ontario, which is roughly 250 miles north of Toronto. 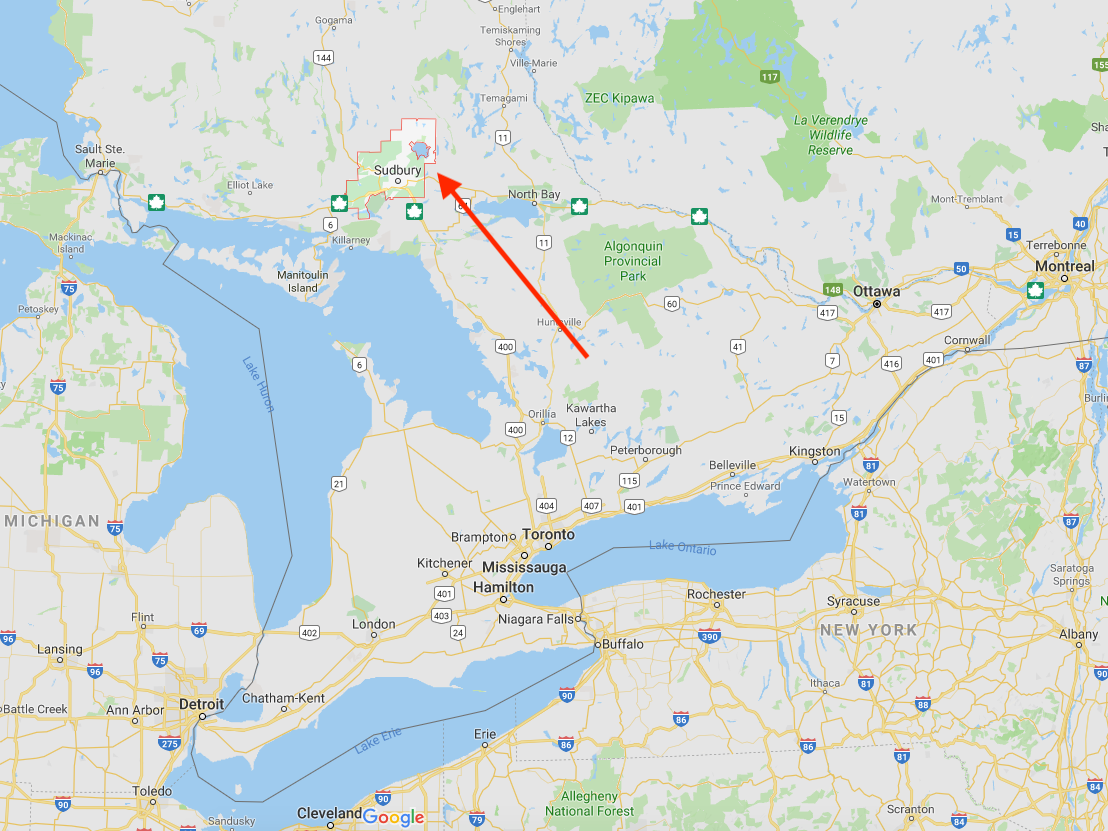 Google MapsSudbury, Ontario is the fifth-largest city in Canada by land size.

Trebek attended the University of Ottawa … 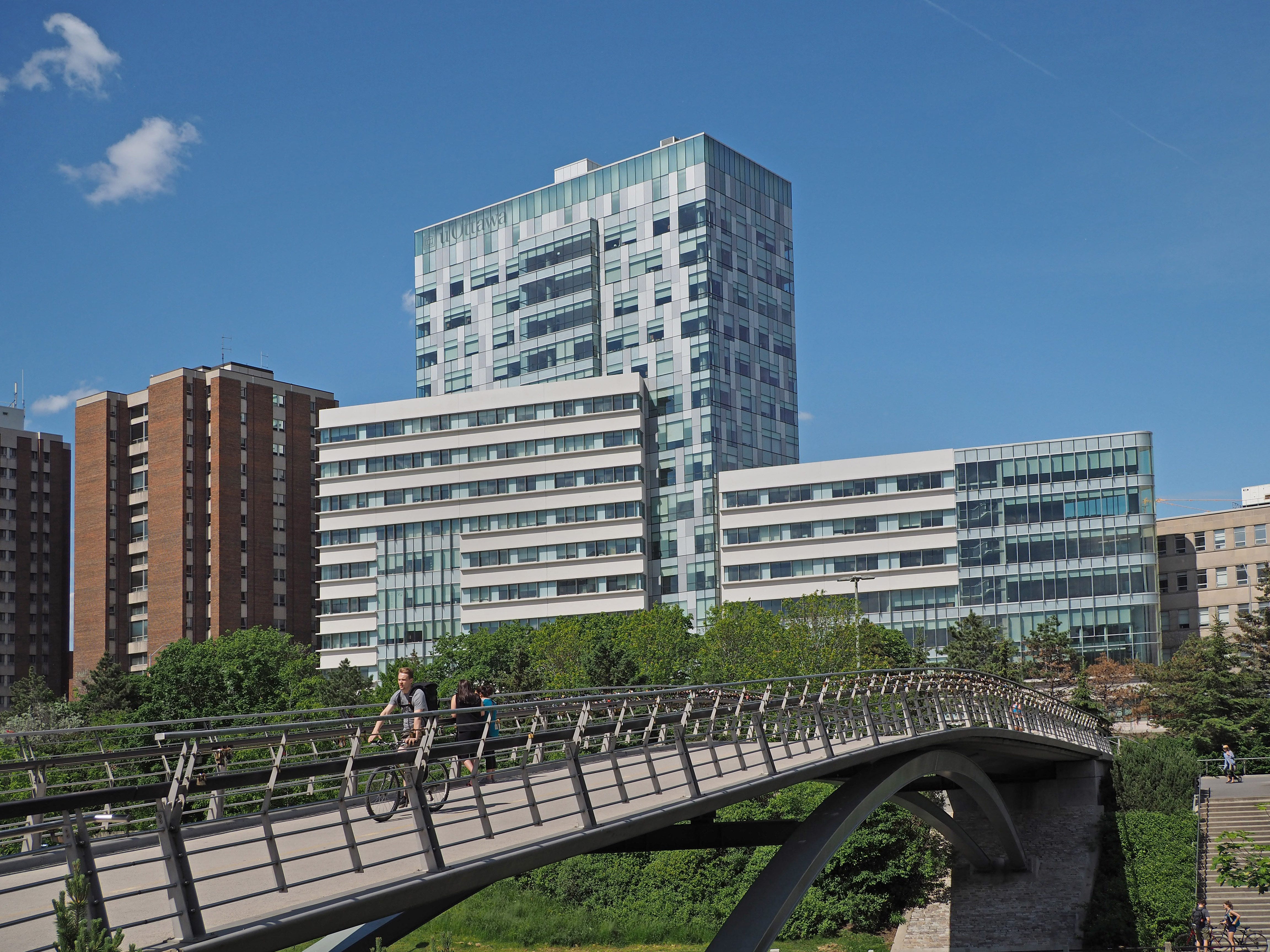 … where he began his career at the Canadian Broadcasting Corporation. He worked as a journalist and sports announcer before transitioning to hosting shows such as “Music Hop,” a live teen music show, in the 1960s. After moving to the United States, Trebek debuted as the host of the game show “High Rollers” … 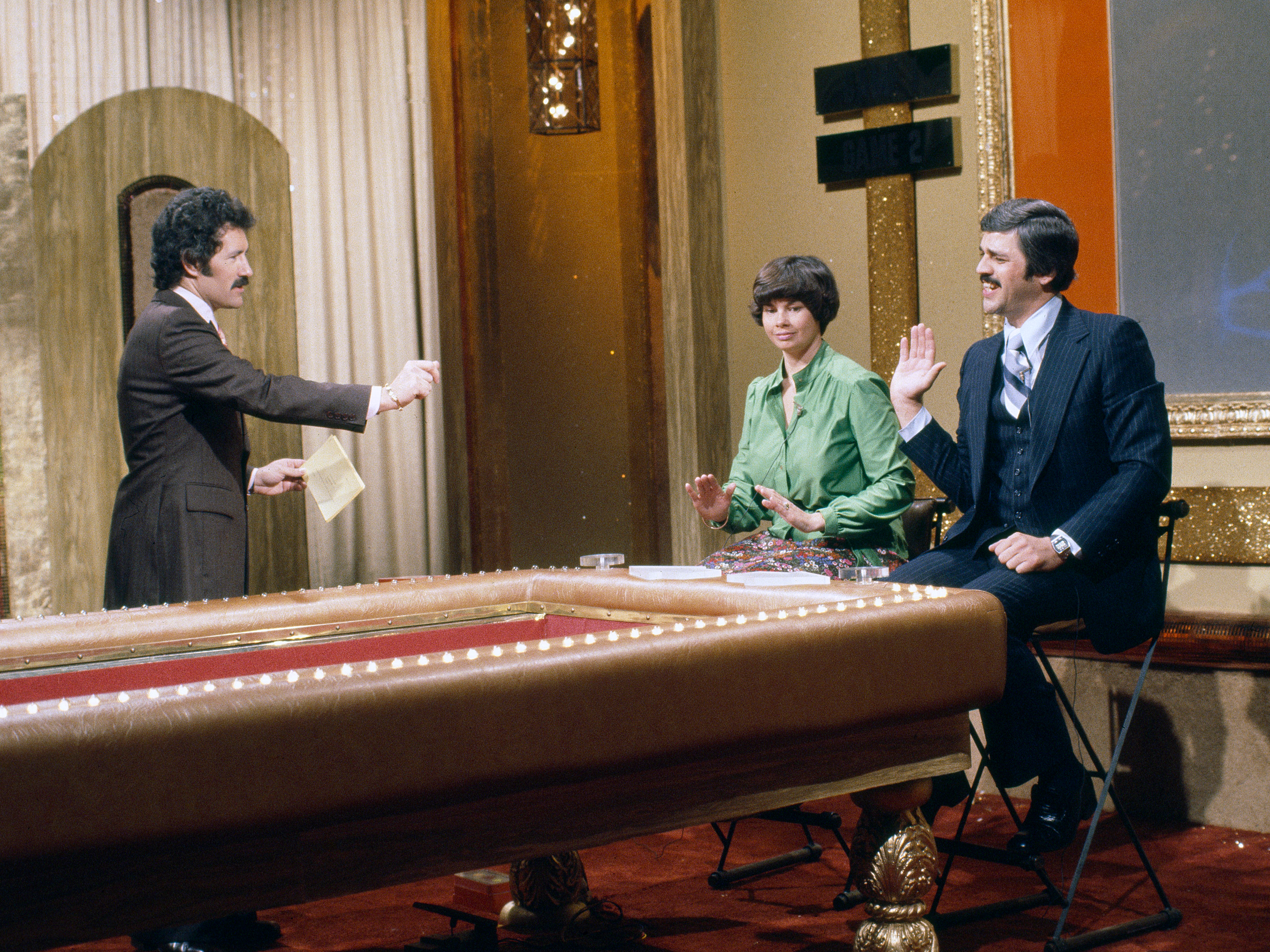 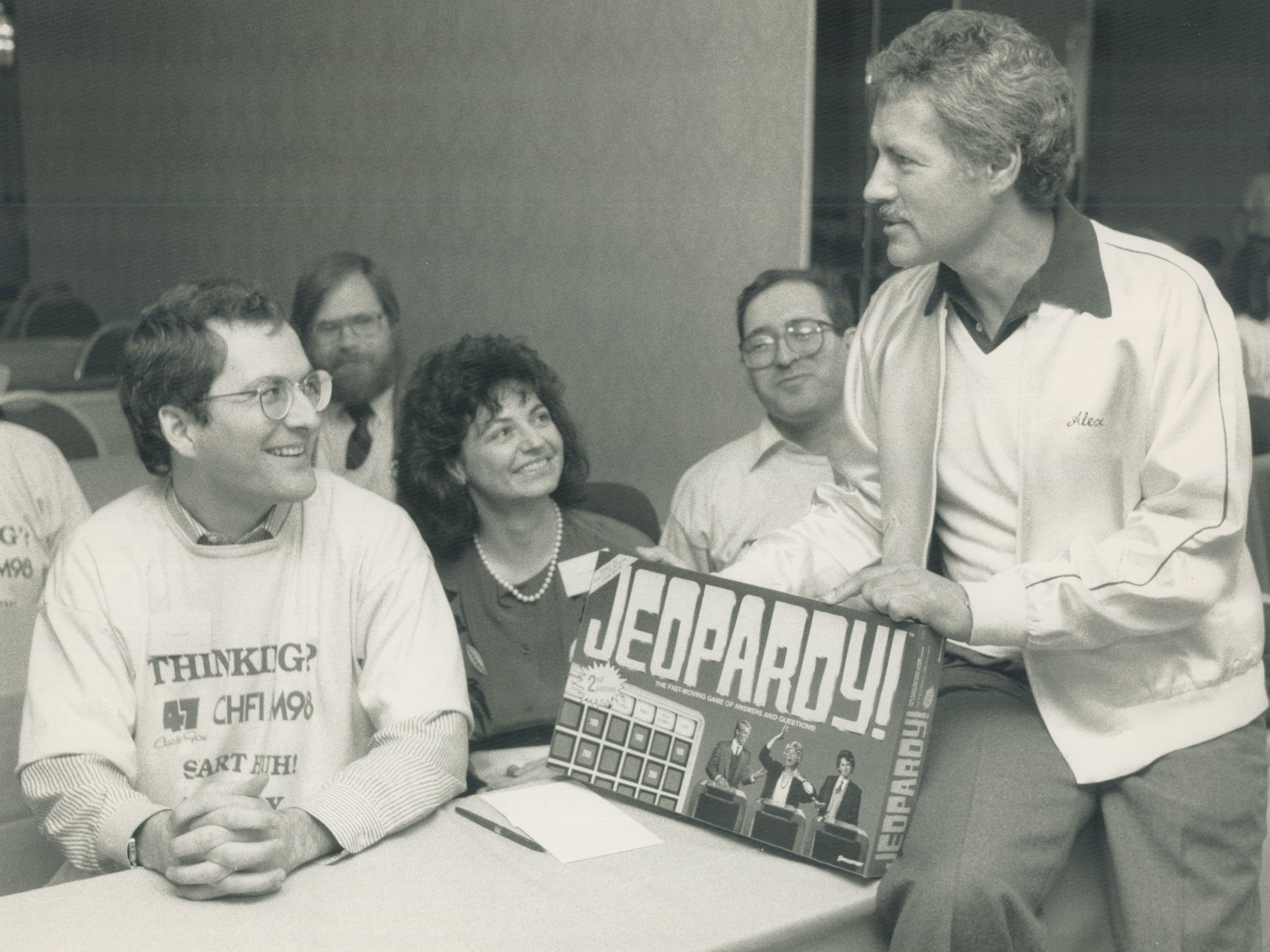 “Jeopardy!” is by far Trebek’s most successful show. It has aired more than 8,000 episodes to date. Despite its many episodes, the show only tapes 46 days out of the year, fitting multiple episodes in on these days to be aired later. 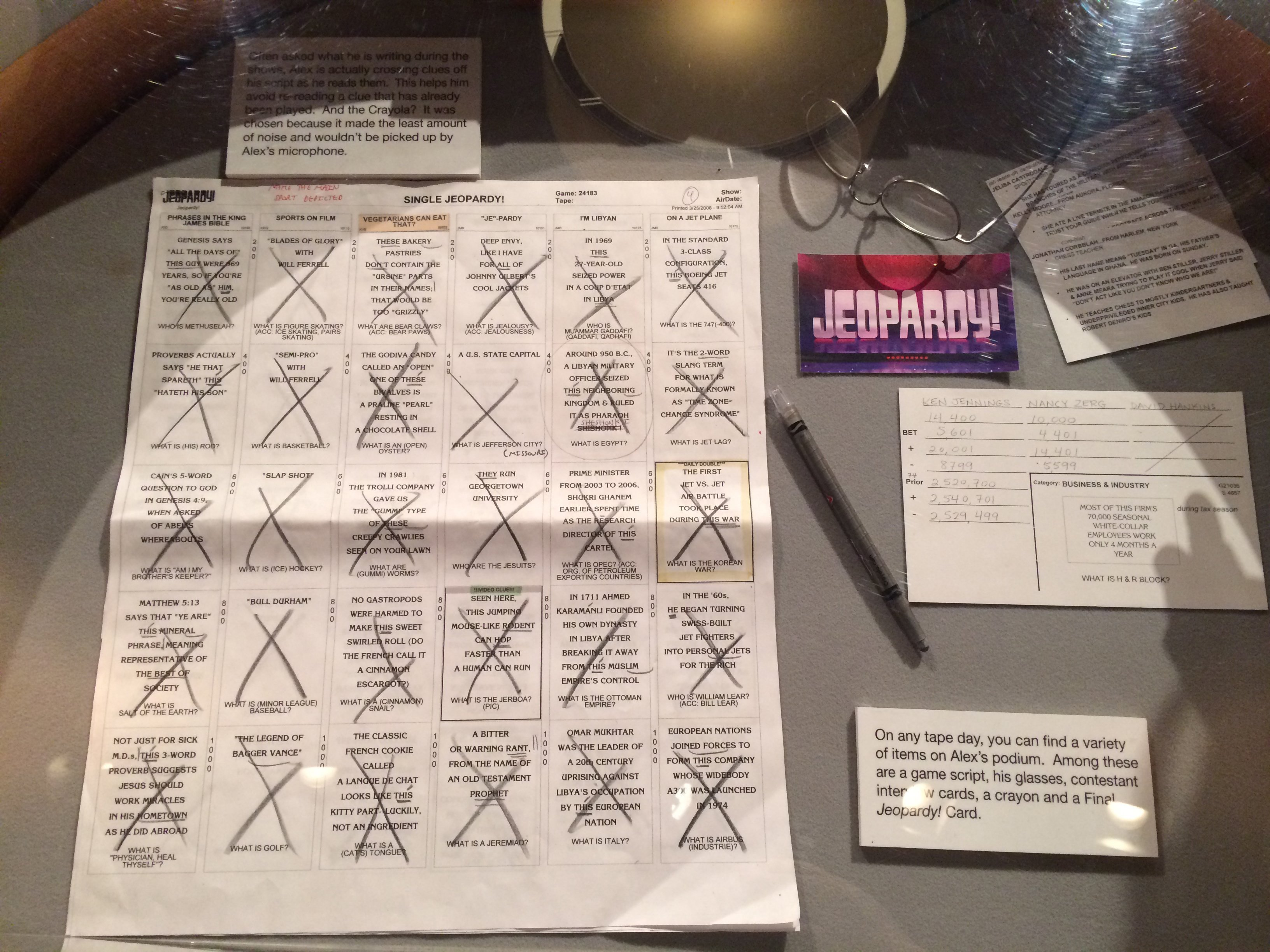 Josh Noel/Chicago Tribune/MCT via Getty ImagesA previous podium of Trebek’s with a sample sheet and other items on display outside the ‘Jeopardy!’ studio.

In 1994, the Game Show Network launched as a new cable network, and began broadcasting “Jeopardy!” and other classic game shows. REUTERS/Fred ProuserAlex Trebek with ‘Jeopardy!’ with ‘Wheel of Fortune’ creator Merv Griffin and Vanna White celebrating the launch of the Game Show Network in 1994. Adrian Sanchez-Gonzalez/Getty ImagesJean Currivan is Trebek’s second wife, he was married previously from 1974-1981.

Trebek’s family was present for his induction to the Hollywood Walk of Fame in 1999. ReutersThe Trebek family on the Hollywood Walk of Fame in 1999.

Other accolades of his include seven Daytime Emmy Awards. Six of those were awards for Outstanding Game Show Host … Trebek was also awarded a Peabody Award for “Jeopardy!” the following year in 2012. In 2014, Trebek was awarded a Guinness World Record for the most game show episodes hosted by the same presenter. With 6,829 episodes hosted at the time, he surpassed Bob Barker’s record on “Price Is Right.” 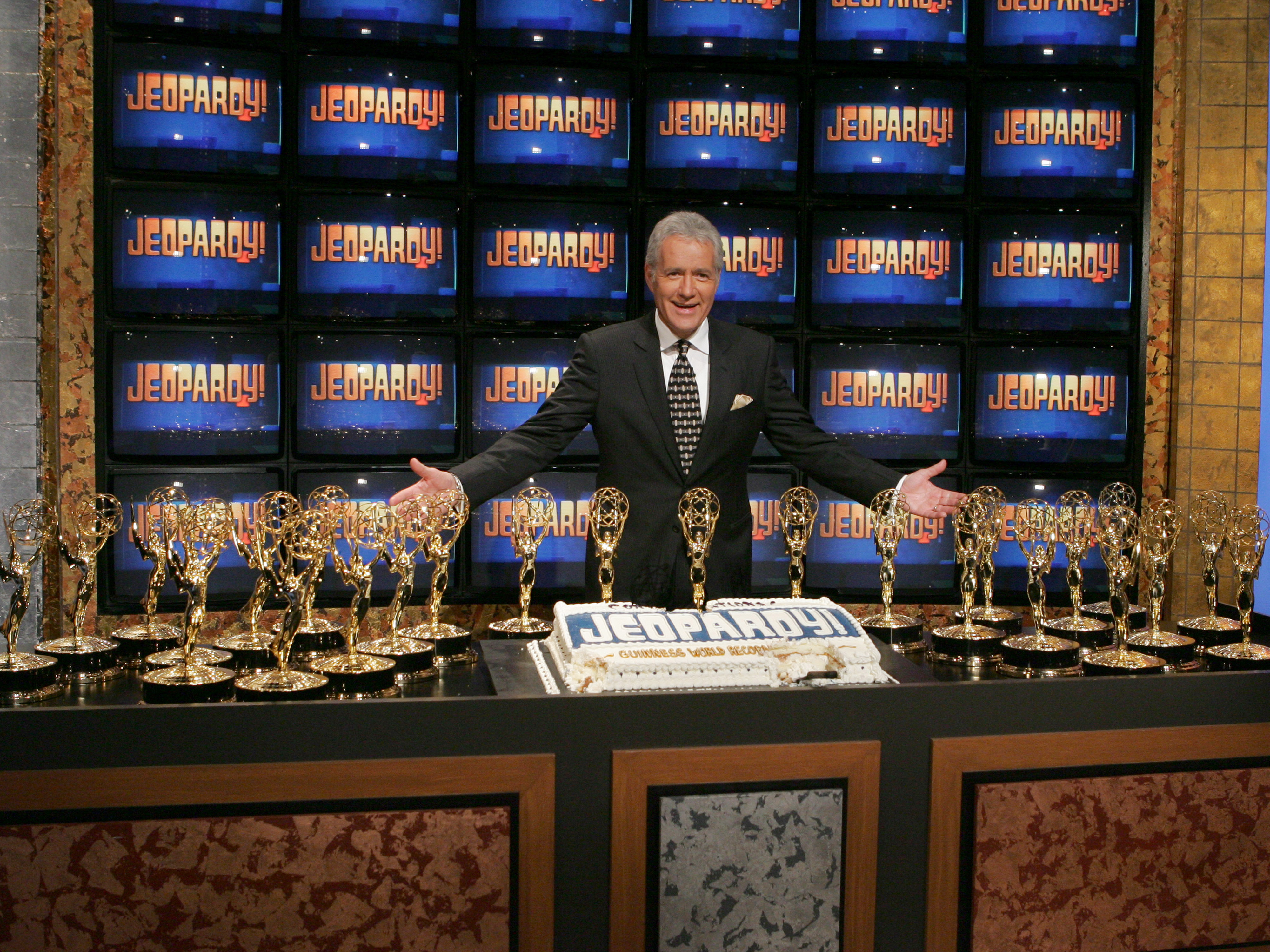 E. Charbonneau/WireImage for Columbia TriStar Home Entertainment/Getty ImagesTrebek celebrating with a Guinness World Record cake and a display of the show’s Emmy Awards in 2005.

Will Ferrell famously portrayed Alex Trebek’s iconic role during his time on SNL for the recurring “Celebrity Jeopardy!” skits. Trebek himself made a guest appearance in 2002. 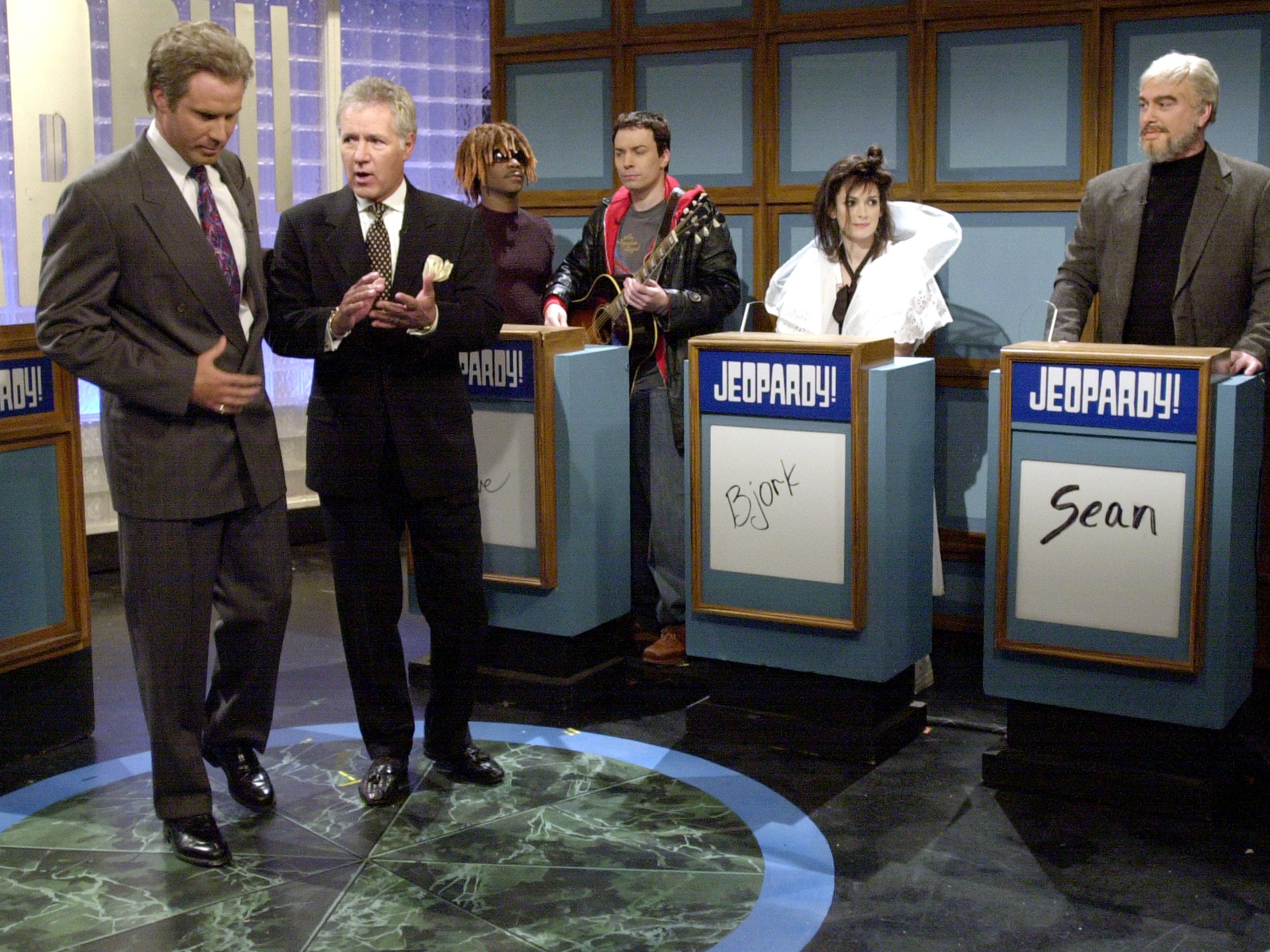 Trebek has also made many other television appearances over the years, usually as himself. He has appeared on shows such as “Golden Girls,” “Cheers,” “How I Met Your Mother,” and most recently, “Orange is the New Black.” Gary Null/NBCU Photo Bank/Getty ImagesTrebek on an episode of ‘Golden Girls’ in 1992. 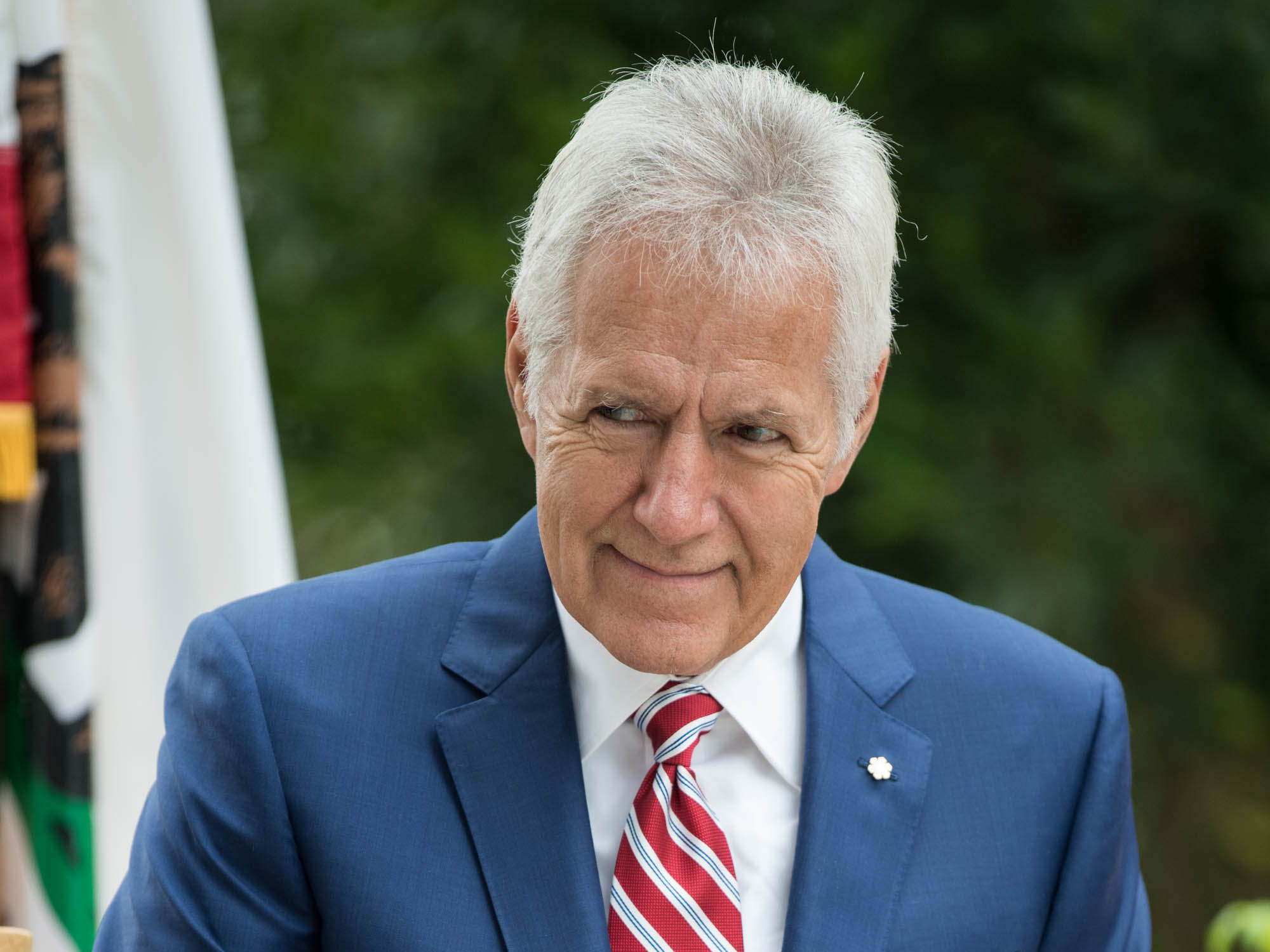 Last March, Trebek announced that he’d been diagnosed with stage 4 pancreatic cancer. He’s had previous health complications including surgery for blood clots in 2018 and a minor heart attack in 2007. Ethan Miller/Getty ImagesIn his announcement of his cancer diagnosis, Trebek said he planned to ‘fight it’ because he had three years left in his ‘Jeopardy!’ contract. In the time since his diagnosis, Trebek has continued to host “Jeopardy!,” even helming a “Greatest of All Time” tournament featuring popular past contestants Ken Jennings, James Holzhauer, and Brad Rutter. On Wednesday, Trebek posted an emotional update about his health on social media — he’d reached the one-year survival mark. Trebek also said that he and his oncologist are working to make sure he lives to see another year. “If we take it one day at a time with a positive attitude,” he continued, “anything is possible.”

A one-year update from Alex: pic.twitter.com/W9101suZeZ