AirAsia Group’s CEO has said on Twitter that the Flight QZ 8501 plane disappearance is his “worst nightmare.”

“I am touched by the massive show of support especially from my fellow airlines. This is my worse nightmare. But there is no stopping,” AirAsia Group CEO Tony Fernandes tweeted on Sunday.

The plane went missing during a flight from Indonesia to Singapore shortly after asking to deviate from its planned flight path because of bad weather.

The flight crew lost contact with air traffic control at about 6:17 a.m. on Sunday, about halfway through the flight, and the plane is thought to have crashed near the Indonesian island of Belitung.

Search and rescue teams have yet to find any wreckage.

Fernandes sent out a series of tweets after news broke that the plane had gone missing:

On my way to Surabaya where most of the passangers are from as with my Indonesian management. Providing information as we get it.
— Tony Fernandes (@tonyfernandes) December 28, 2014

My only thought are with the passangers and my crew.We put our hope in the SAR operation and … http://t.co/m95Ei6OnEP
— Tony Fernandes (@tonyfernandes) December 28, 2014

I am touched by the massive show of support especially from my fellow airlines. This is my worse nightmare. But there is no stopping.
— Tony Fernandes (@tonyfernandes) December 28, 2014

To all my staff Airasia all stars be strong, continue to be the best. Pray hard. Continue to do your best for all our guests. See u all soon
— Tony Fernandes (@tonyfernandes) December 28, 2014

I as your group ceo will be there through these hard times. We will go through this terrible ordeal together … http://t.co/6iO2zKcFzN
— Tony Fernandes (@tonyfernandes) December 28, 2014

Our priority is looking after all the next of Kin for my staff and passangers. We will do whatever we can. … http://t.co/6BFsUR7zDS
— Tony Fernandes (@tonyfernandes) December 28, 2014

Fernandes is the face of AirAsia and has been called Malaysia’s Richard Branson, according to BBC. The entrepreneur bought AirAsia in 2001 with the aim of transforming it into a budget airline that could compete with major carriers. The company is based in Malaysia.

He’s one of the richest men in Malaysia with a net worth of $US650 million, The Independent reports.

The missing plane is an Airbus A320-200, a popular and generally reliable model. The plane is about six years old and is operated by AirAsia’s Indonesian affiliate, which the Malaysia-based company holds a 48.9% stake in, CNN reports.

155 Indonesians are on board the missing plane, along with three people from South Korea, and one from Singapare, Britain, Malaysia, and France. Of those passengers, 16 are children and one is an infant.

Here’s where the plane lost contact with air traffic control: 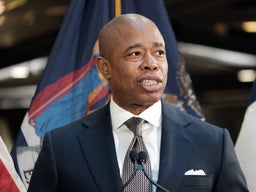