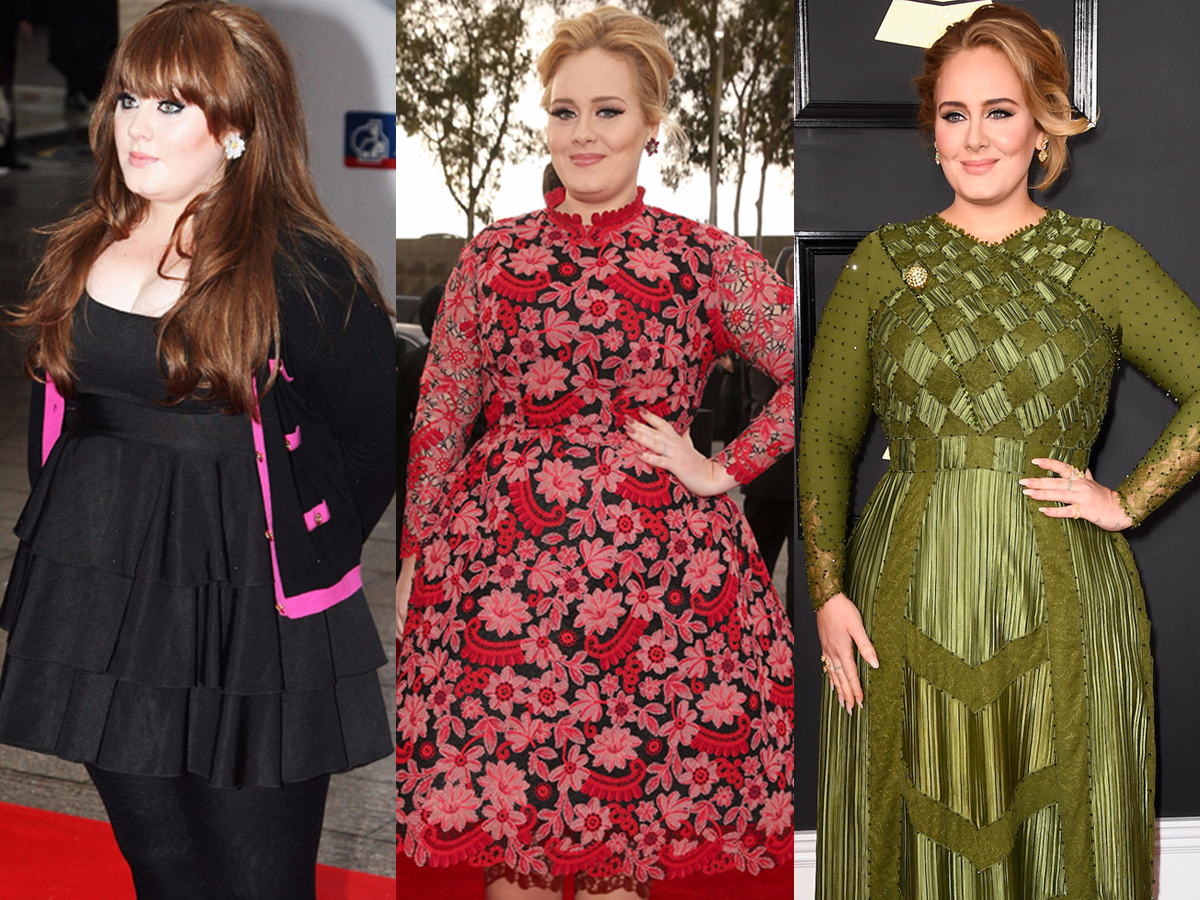 Adele has been in the spotlight for over a decade and has earned 15 Grammy Awards, 18 Billboard Music Awards, five American Music Awards, one Golden Globe award, and an Oscar.

From her signature cat-eye to her love of regal dresses, her style has also turned heads on the red carpet.

Here are some photos that show Adele’s fashion evolution over the past few years.

One of Adele’s first major appearances was at the 2008 Brit Awards in London. 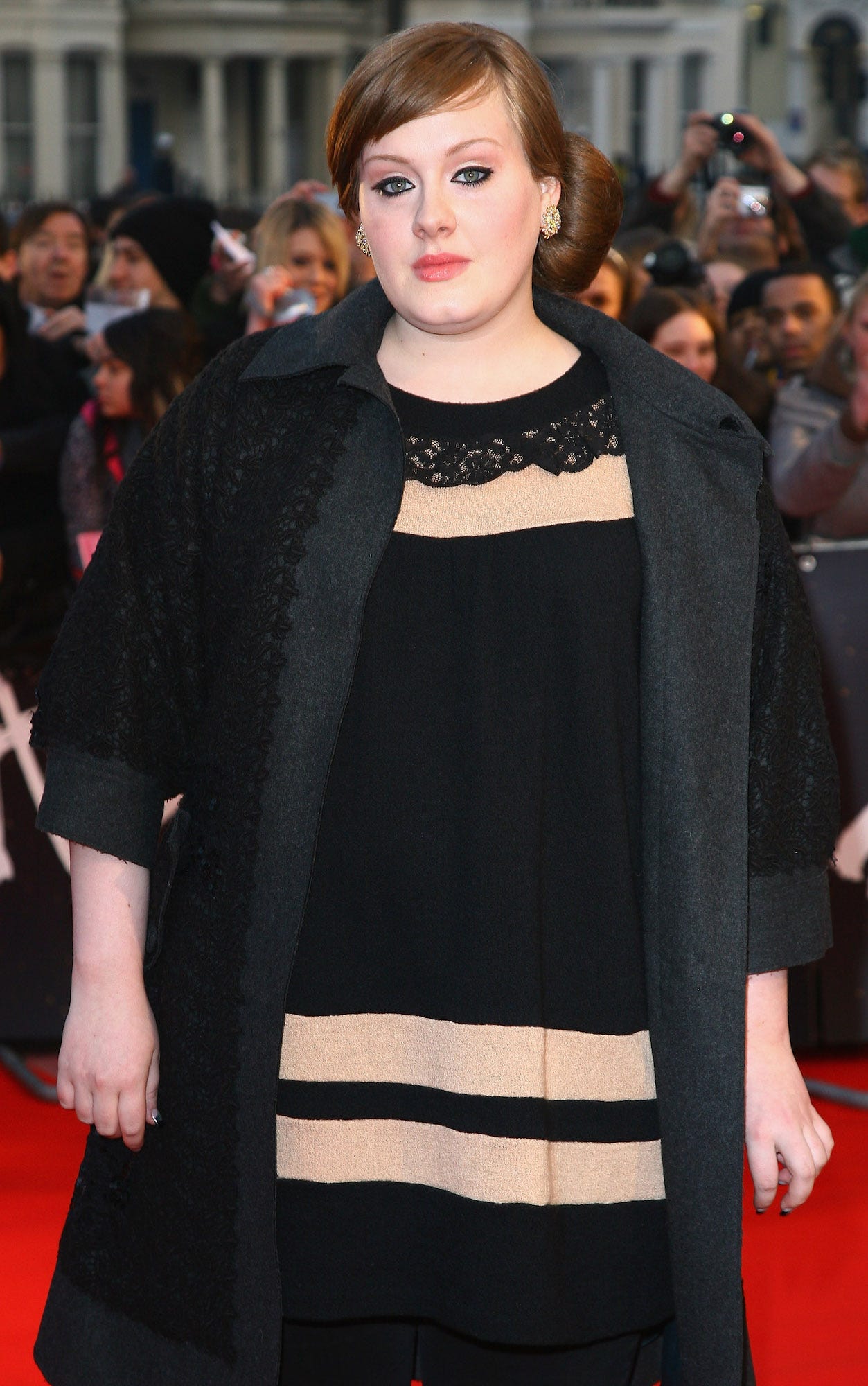 The dress was accented with a black blazer and paired with smoky eyeliner.

The “Hello” singer looked like a mod queen at an event in September 2008. 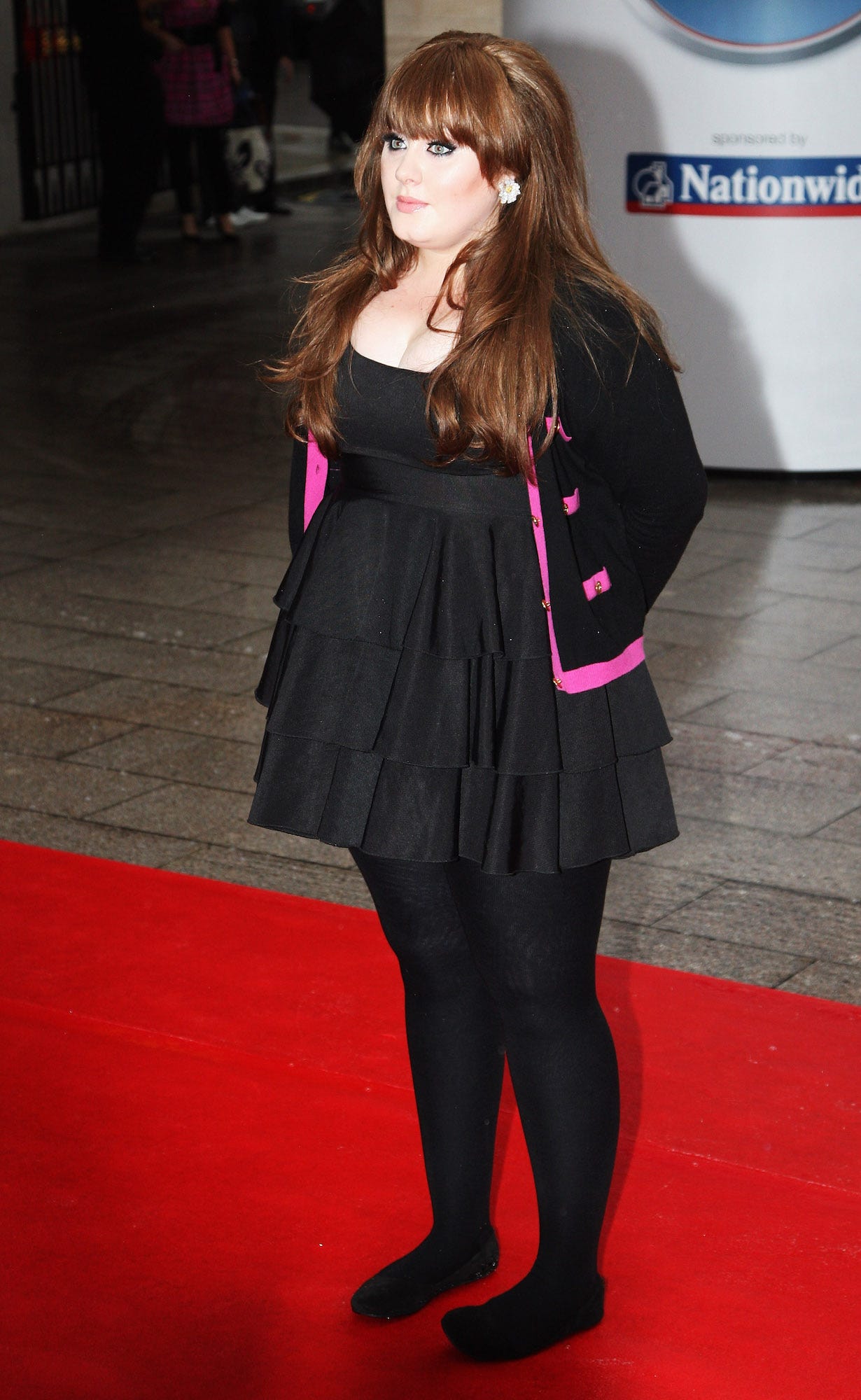 Adele debuted blunt bangs and pin-straight locks with tons of volume to go along with her all-black ensemble, which was broken up by a cardigan with hot-pink trim.

She kept her look cosy for a red-carpet appearance in November 2008. 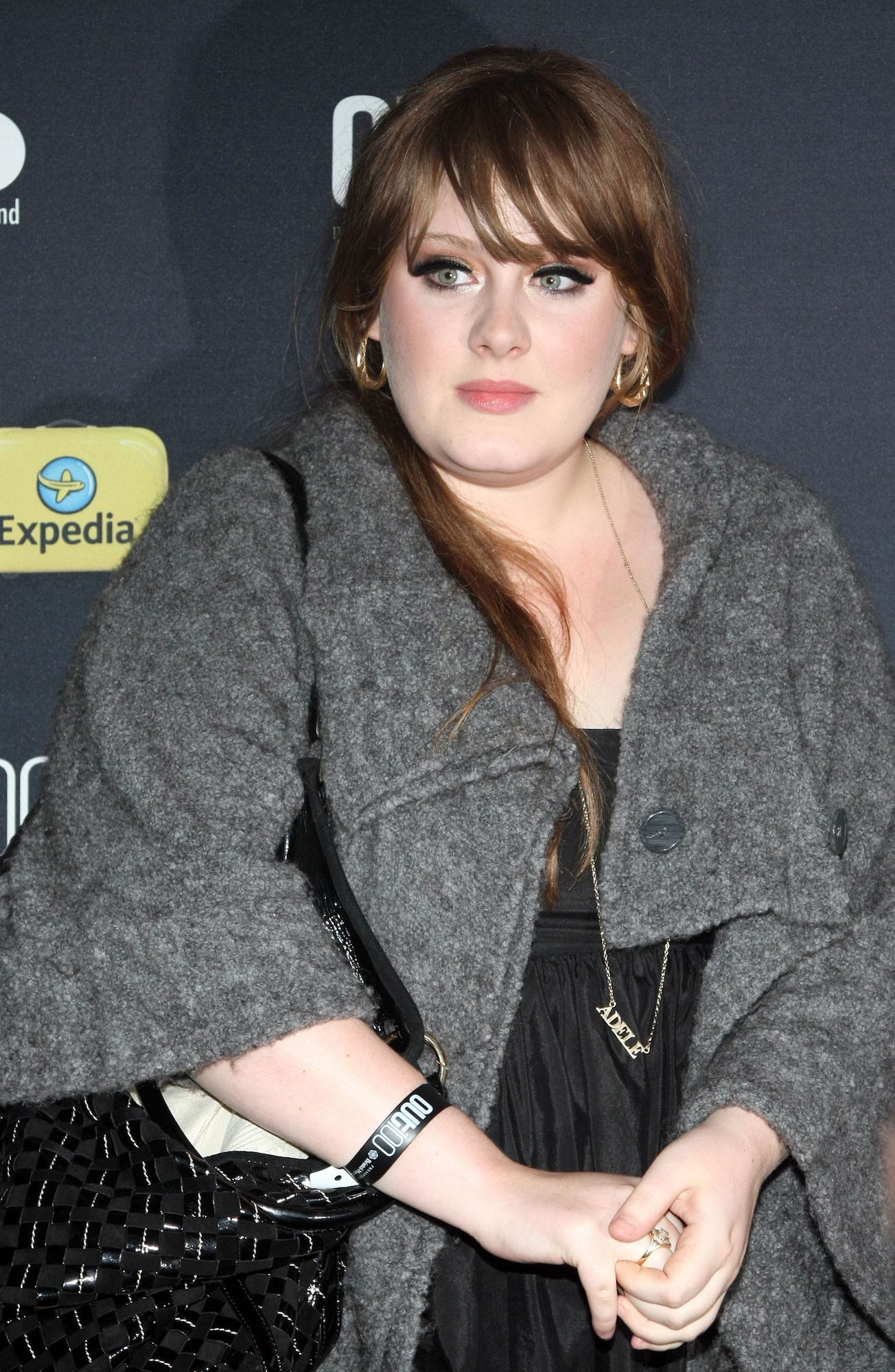 Adele wore an oversized grey sweater over a black blouse and pants. She styled her classic side pony with side-swept bangs.

For her first-ever Grammys appearance in 2009, she went for a glam look. 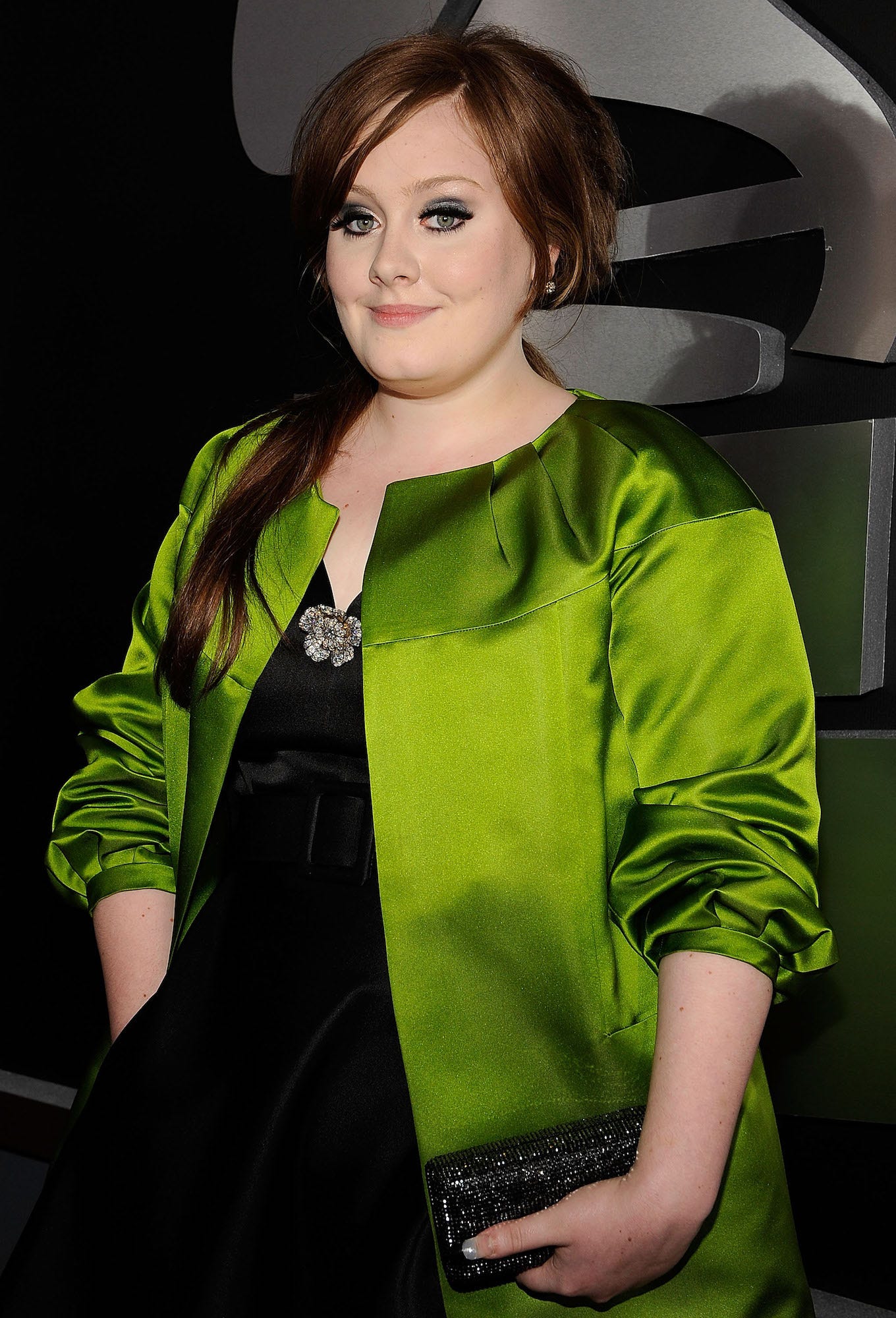 Larry Busacca/Getty ImagesAdele stuck to her signature beauty vibe with a smokey eye, pink lip, and a side pony.

When she won her first Grammy for best new artist, Adele appeared on the red carpet wearing a stunning black satin dress with a green jacket on top.

At the 2009 VH1 Divas show, she went for a tea-length dress with a full skirt. 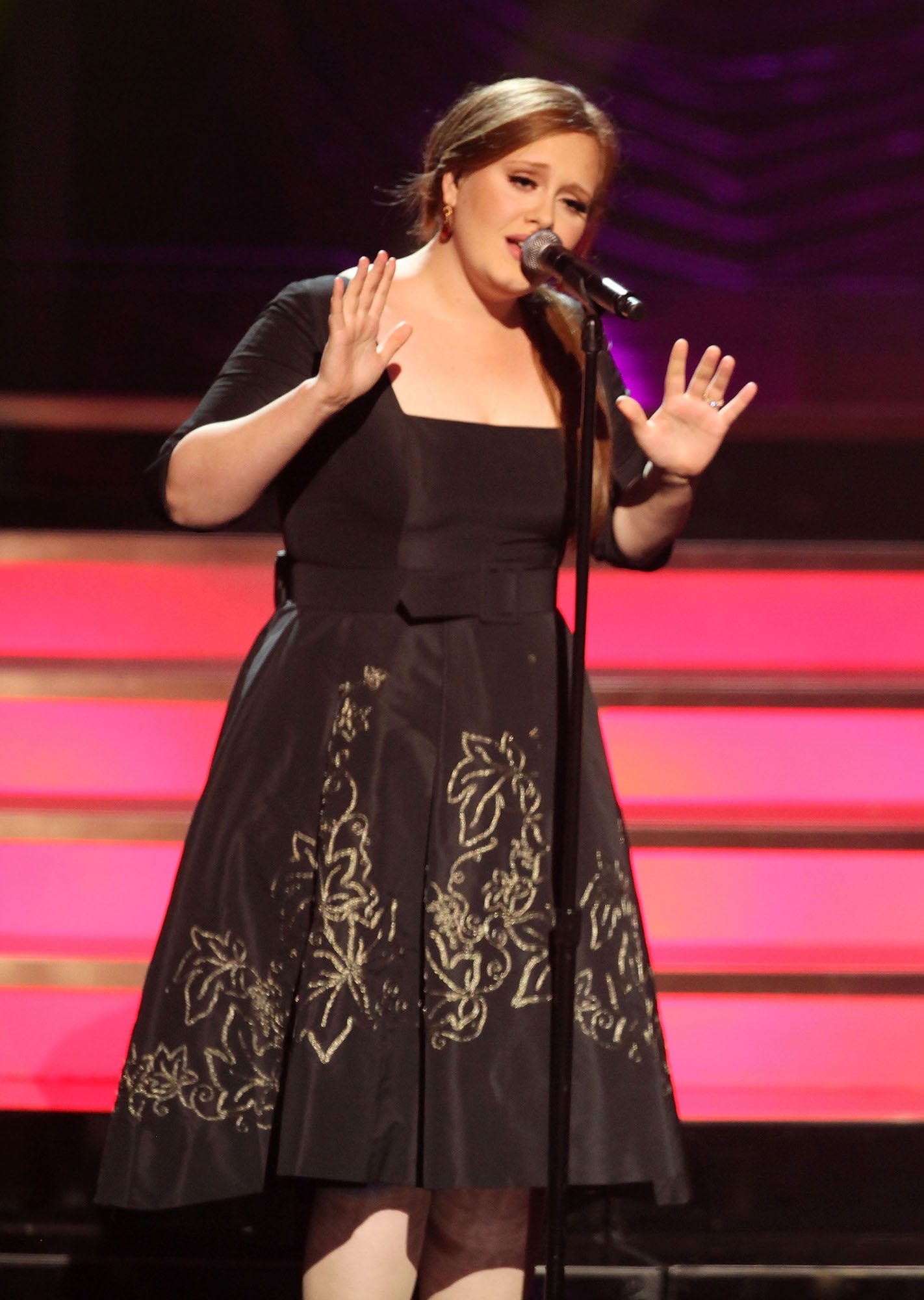 Adele wore a tea-length black gown with a full, floral-printed skirt for the show. Her smoky eye and side pony were firmly intact as she performed alongside fellow divas like Mary J. Blige, Miley Cyrus, Kelly Clarkson, Jordin Sparks, and Paula Abdul. 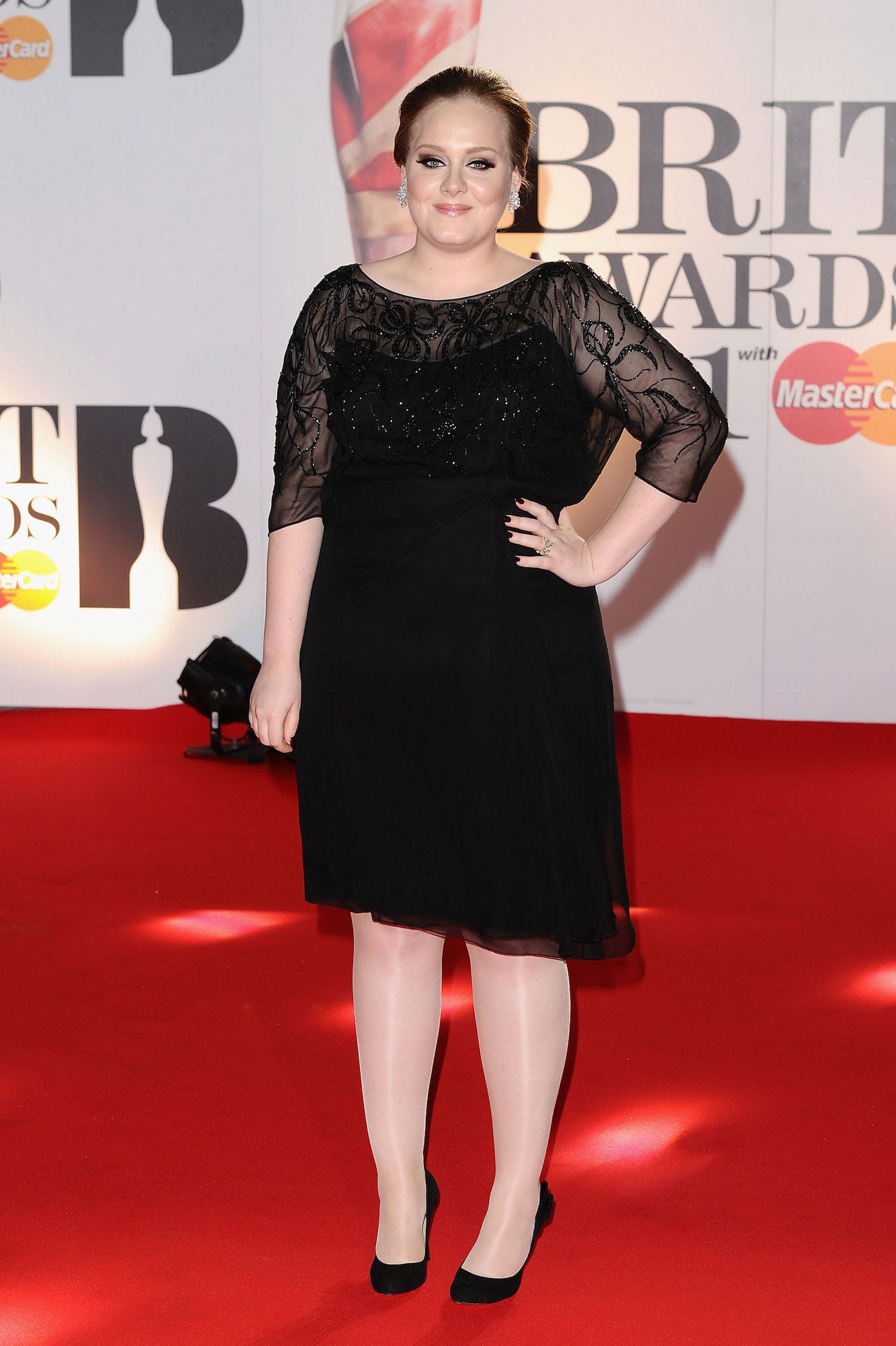 She wore a black dress with a sparkly sheer overlay and paired it with black pumps. The singer added diamond earrings for a bit of bling.

For the 2011 MTV Video Music Awards, she returned to her mod-glam style. 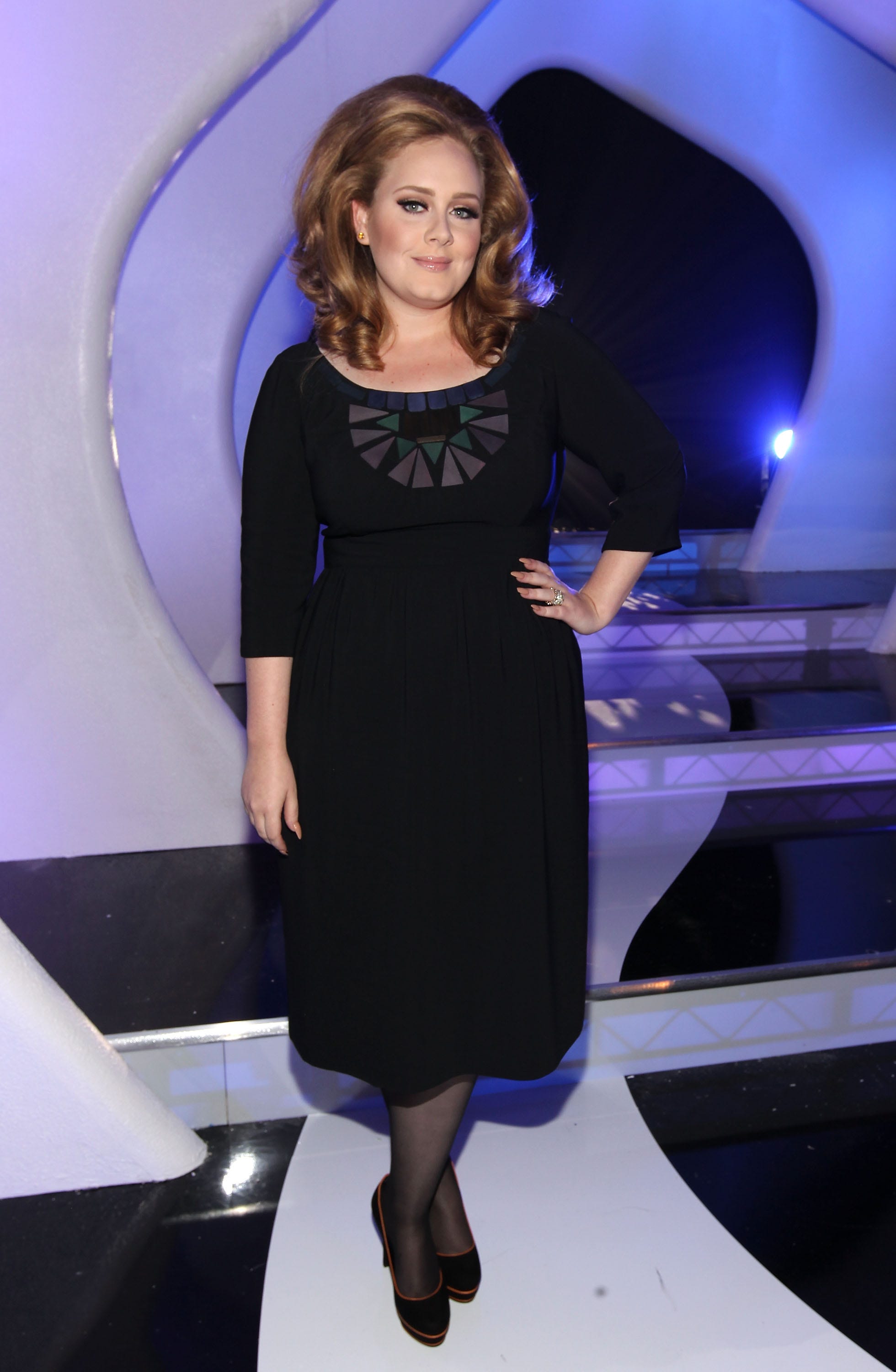 She walked the red carpet in a black dress with a printed bib. The singer added a 1960s-inspired bouffant and her classic smokey eye with mile-long lashes to complete the look.

For her triumphant performance that night, she changed up her look. 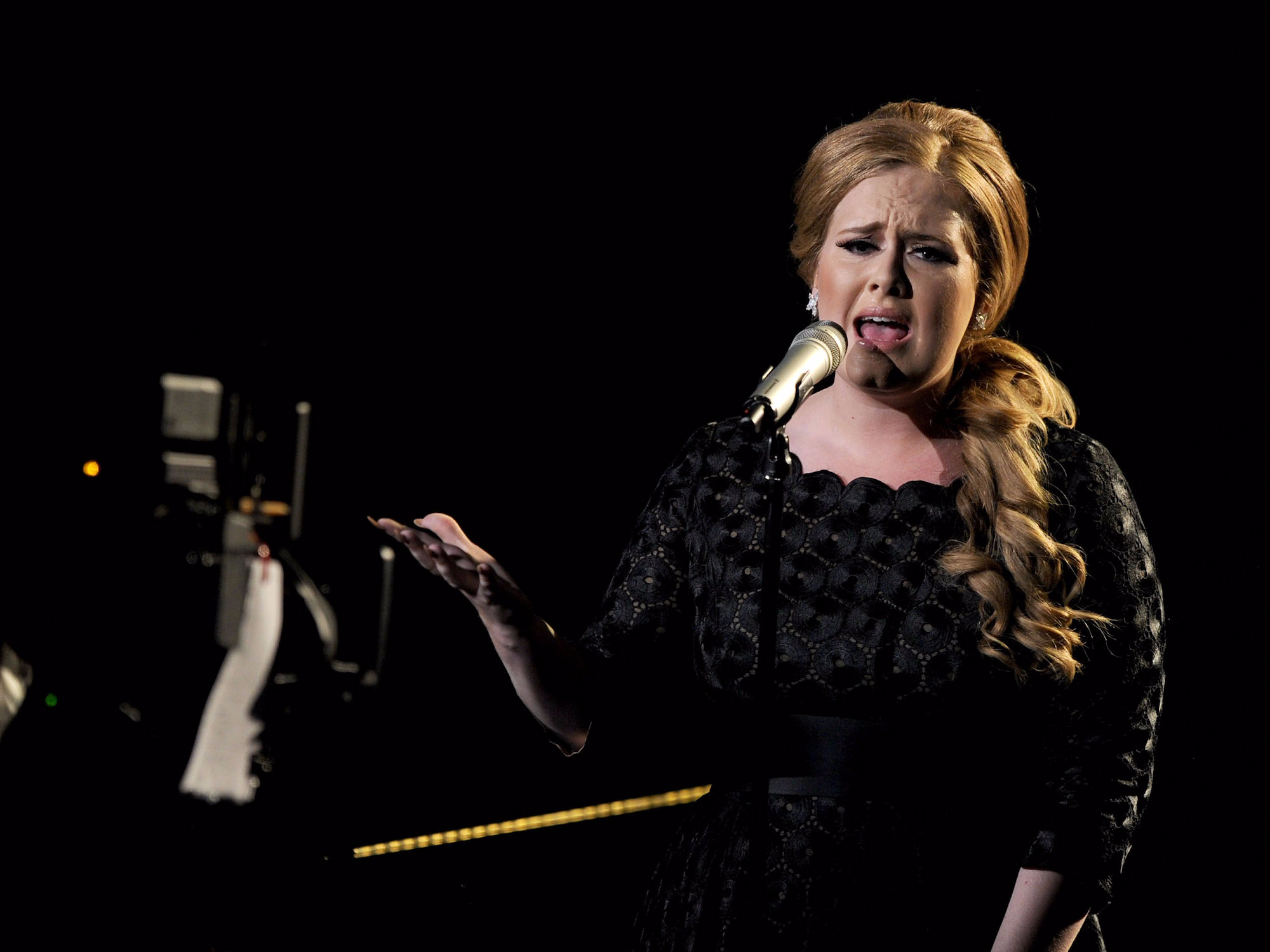 Kevin Winter/Getty ImagesAdele let her hair down in a curly side pony with tons of volume,

Adele looked classic and elegant in a textured, black A-line dress with a scalloped neckline for her performance of “Someone Like You” at the 2011 MTV Video Music Awards.

At a September 2011 event in London, the “Rolling in the Deep” singer stayed true to her style staples with a black, tea-length gown. 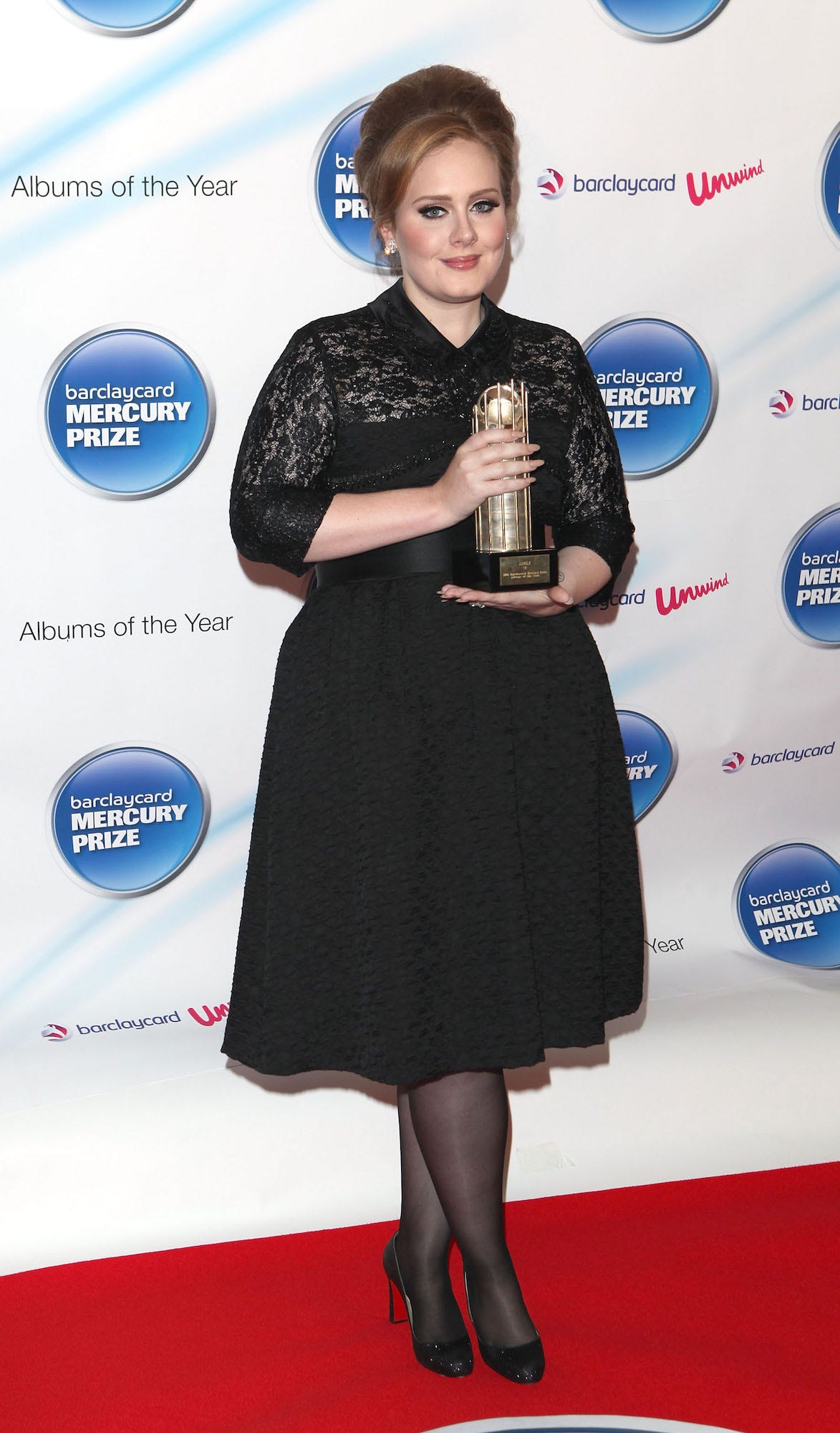 For the event, Adele rocked an all-black dress with a full skirt and a lace overlay. Classic, semi-sheer black tights and sparkly pumps completed the look.

The singer debuted bright blonde hair at the 2012 Grammys. 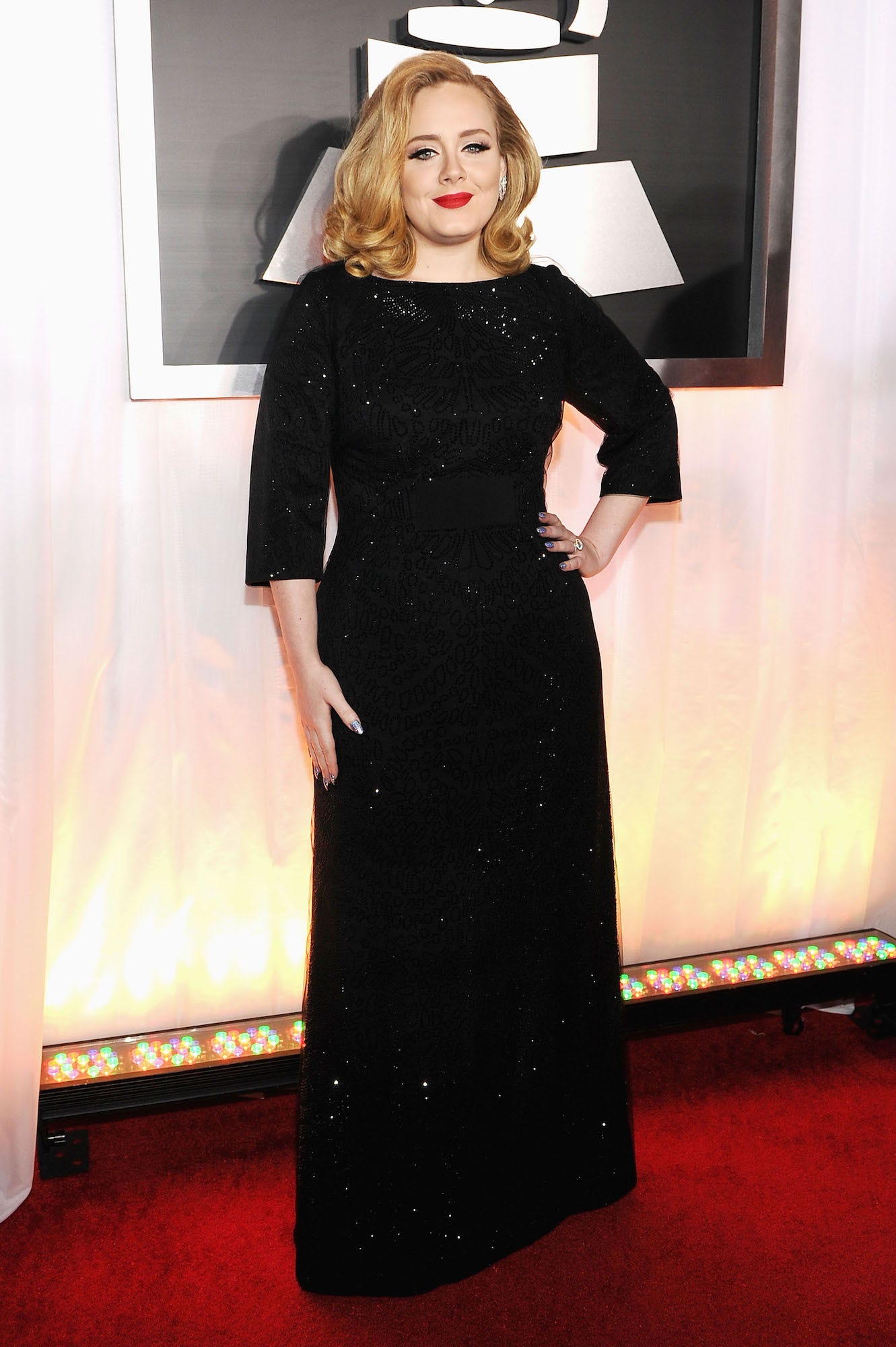 Larry Busacca/Getty Images For The Recording AcademyAdele had blonde hair at the 2012 Grammys.

She paired it with sparkly silver Louboutin pumps and matching silver nails, and topped it all off with a cherry-red lip.

She took the stage in a different black dress to perform “Rolling in the Deep.” 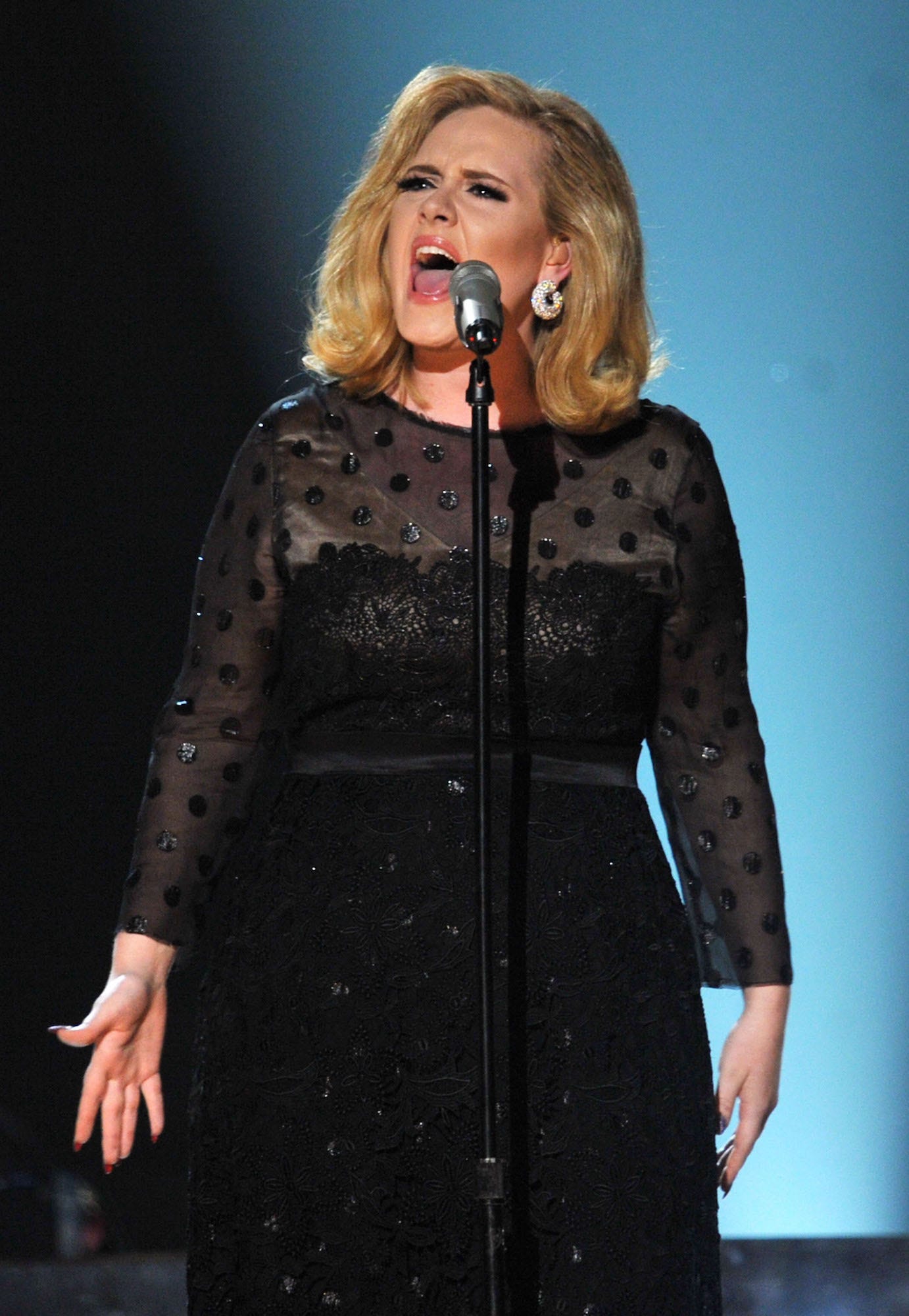 Kevin Winter/Getty ImagesAdele wore a dress with a polka-dot lace overlay while performing at the 2012 Grammys.

Adele dressed in a sparkly long-sleeved LBD with a polka-dot lace overlay and black pumps for her 2012 Grammy performance.

Adele served up a regal look at the 2012 Brit Awards in London. 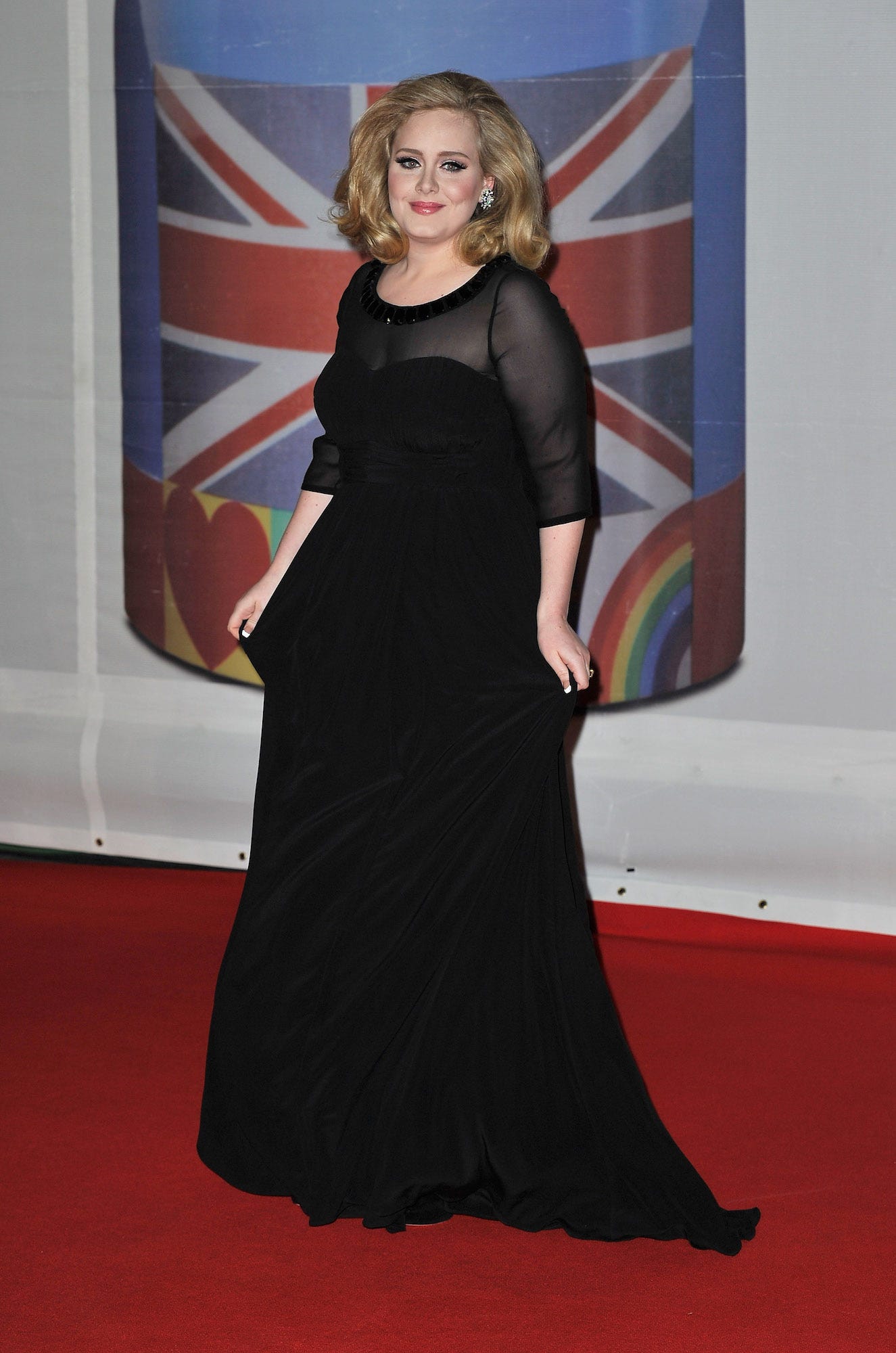 She went for a black Burberry gown with a mesh overlay and kept her hair and makeup simple. 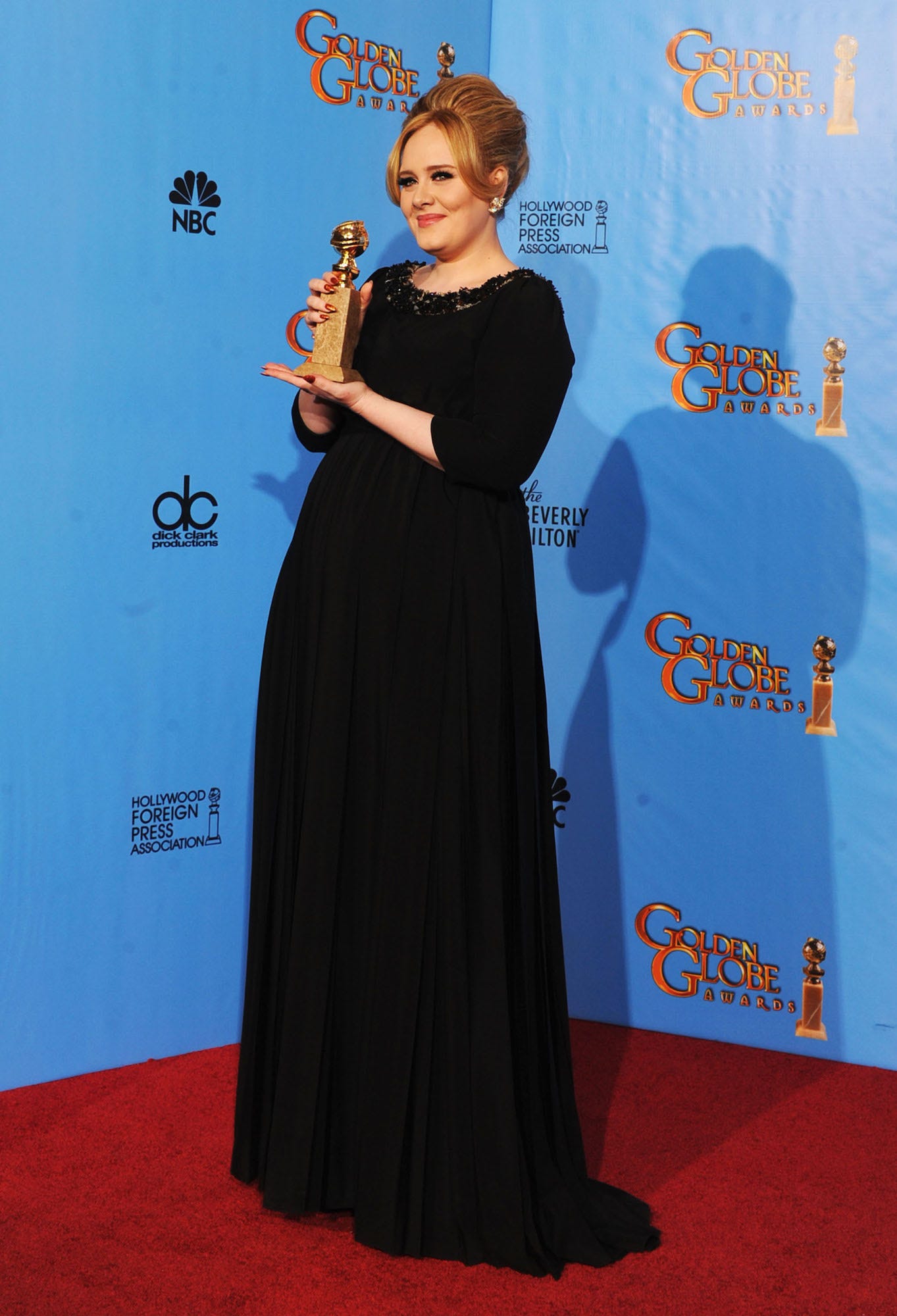 Once again, the singer wore an elegant black gown with a delicate, lacy necklace. She completed the look with classic makeup, a stylish updo, and red nails.

Adele took a style risk with a red-hot Valentino Couture dress at the 2013 Grammys. 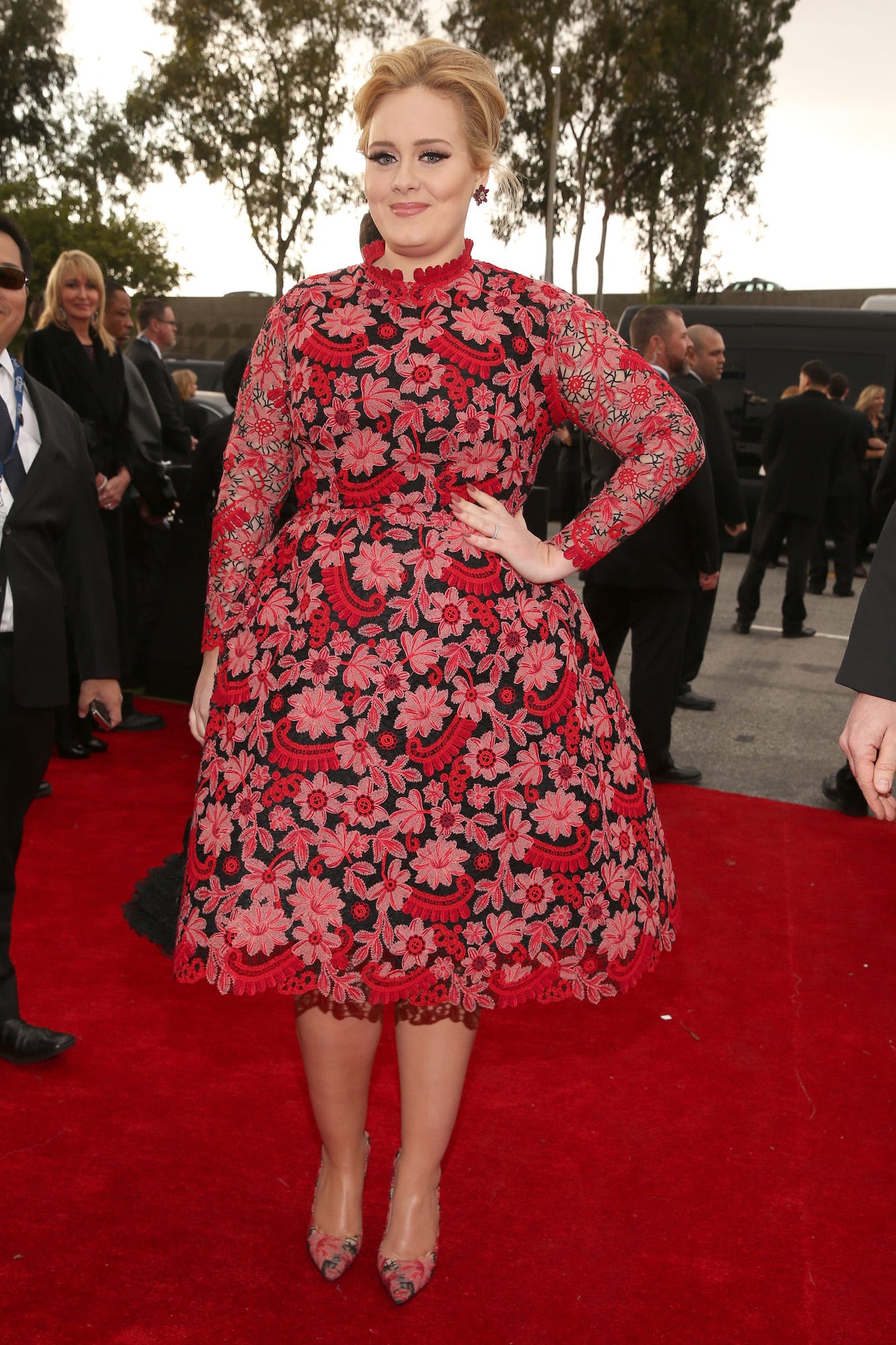 While attending the Grammys, Adele departed from her usual all-black style with a pink and red floral dress and matching heels.

Adele’s red-carpet gown at the 2013 Oscars was stunning and elegant. 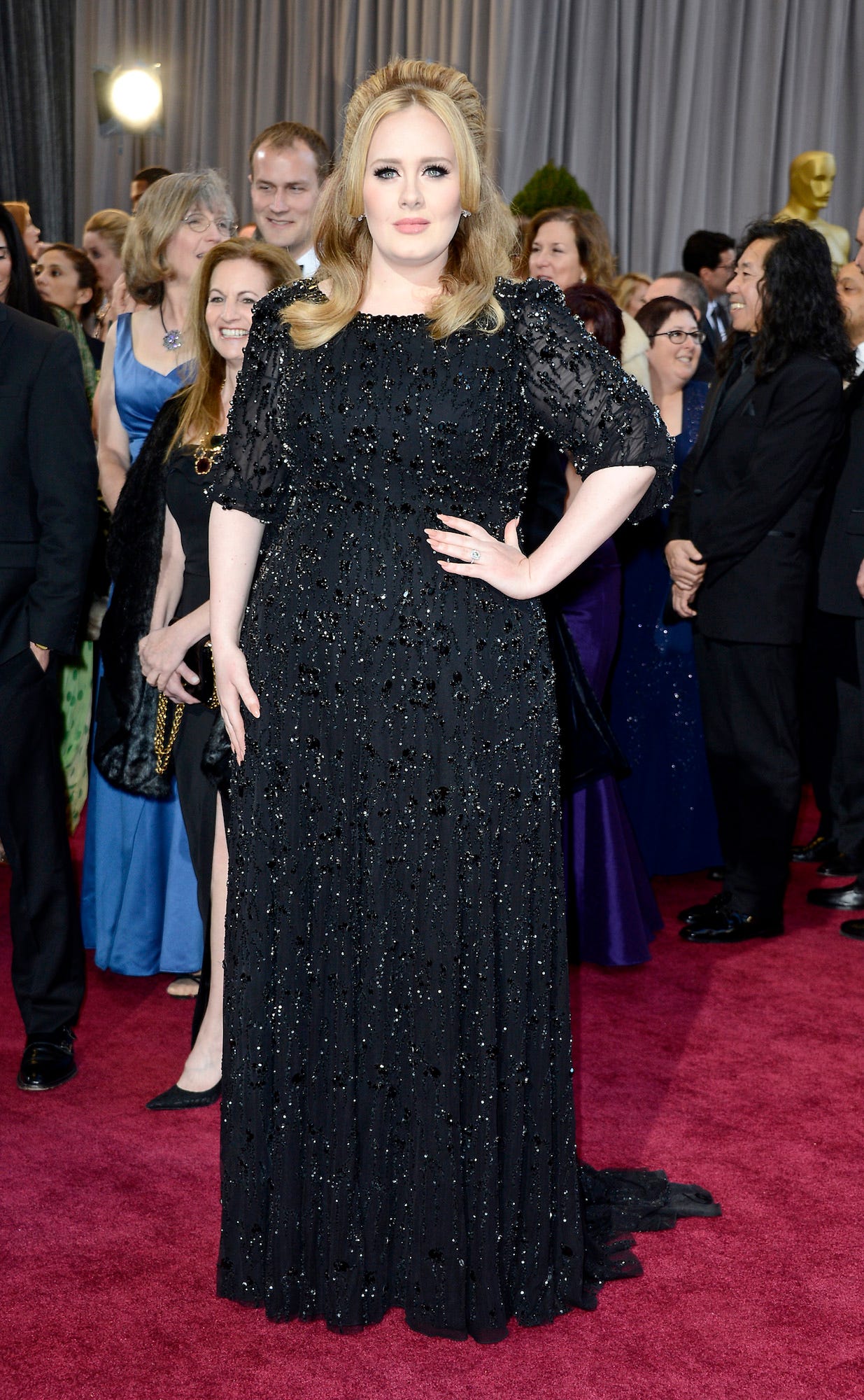 Adele wore another black dress for the 2013 Oscars, but this one had a sparkly, embroidered overlay and was from designer Jenny Packham.

The singer also wore her hair in a retro half-updo and stuck to her signature glam makeup look.

For her “Skyfall” performance that night, she changed into a shorter gown. 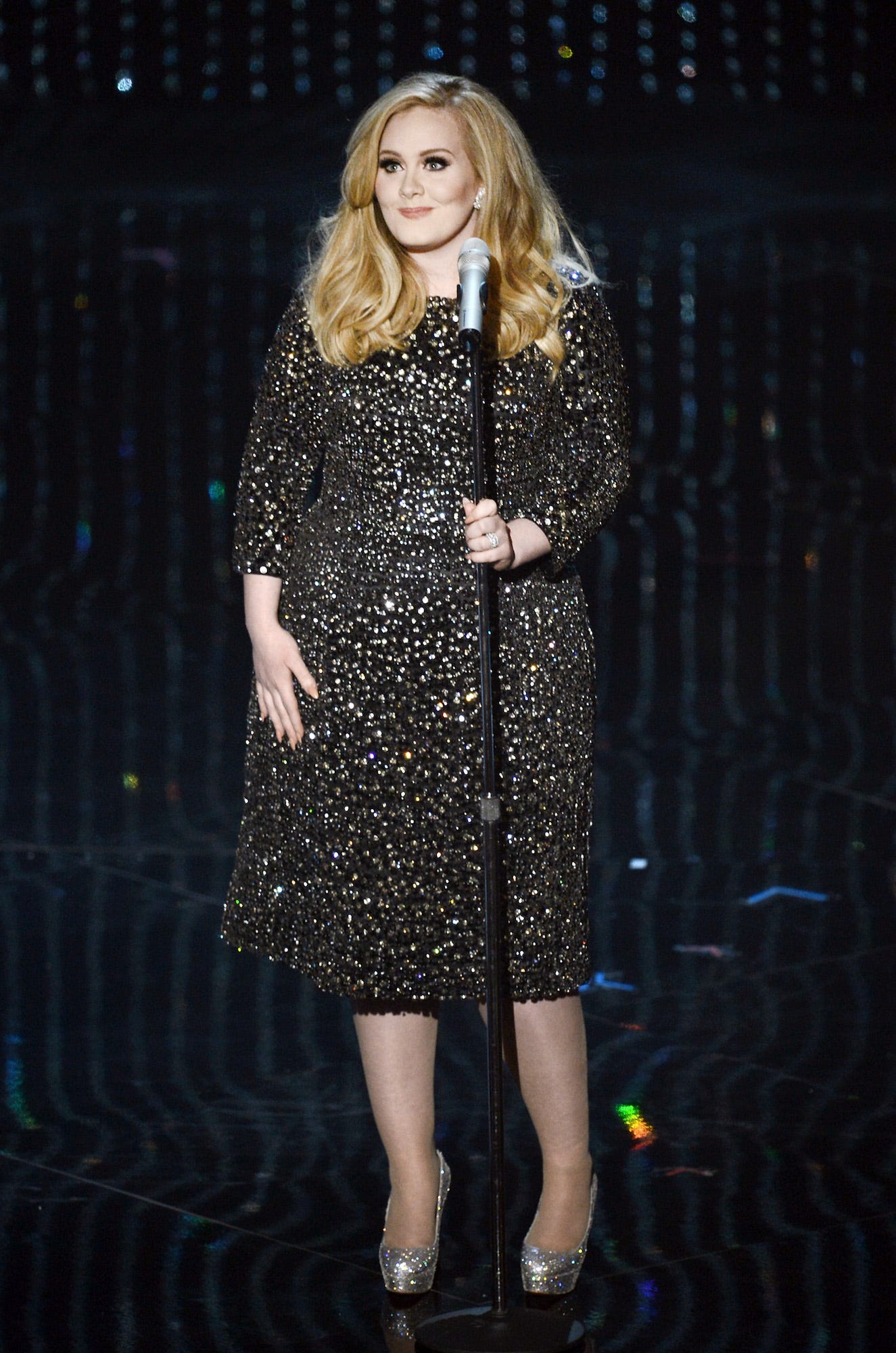 For her 2013 Oscars performance, she changed into a shorter, sparklier version of her red-carpet look and added glittery Louboutin pumps.

On the heels of a global tour, Adele stopped by the 2016 Grammys in a shimmery Givenchy gown. 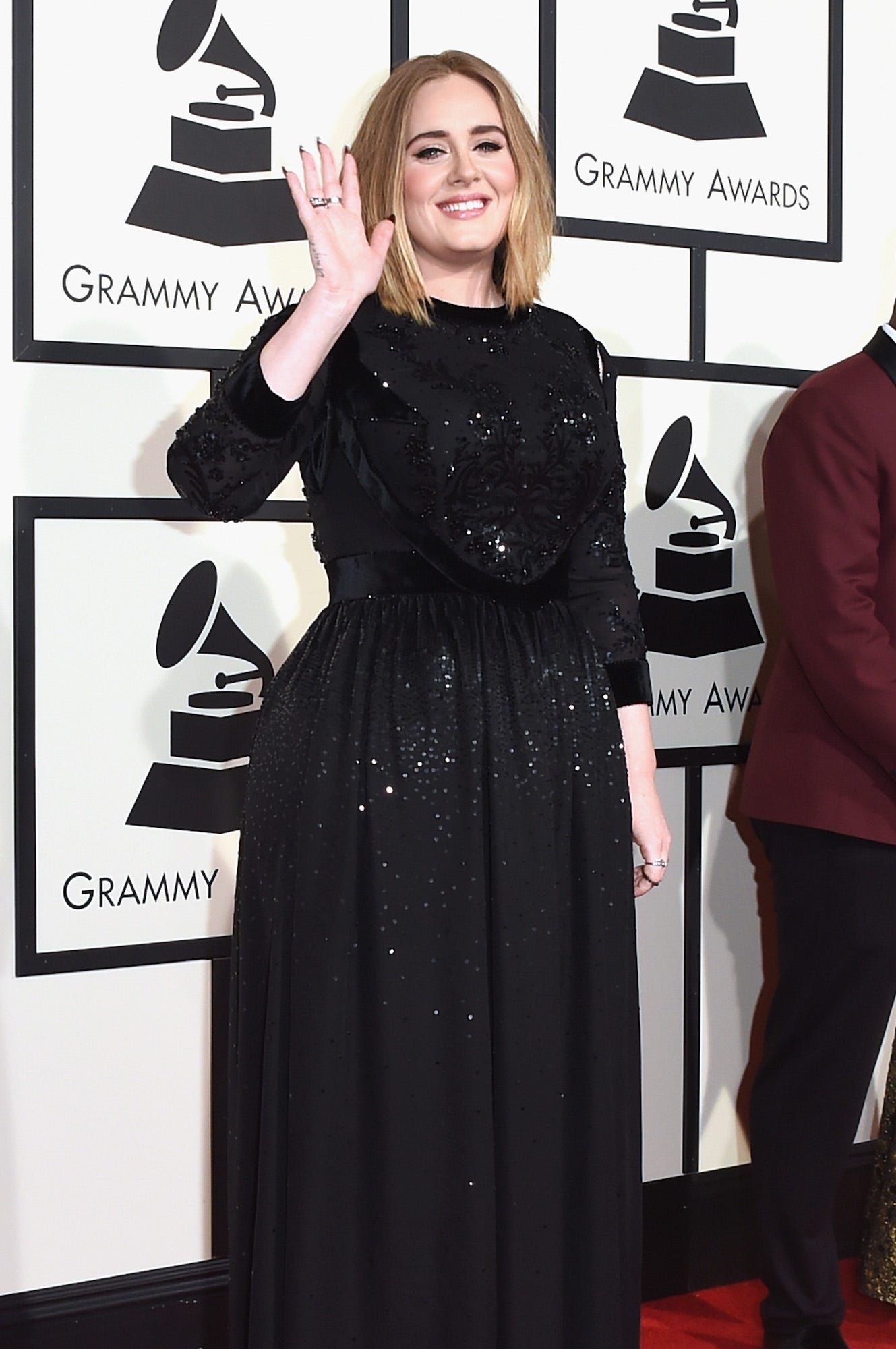 Jason Merritt/Getty ImagesAdele wore black to the 2016 Grammys and debuted a new hairstyle.

She looked simple and elegant for music’s biggest night of the year in a sparkly full-length gown. As usual, she kept her hair and makeup quite simple.

She also performed at the show after changing into a beaded crimson gown. 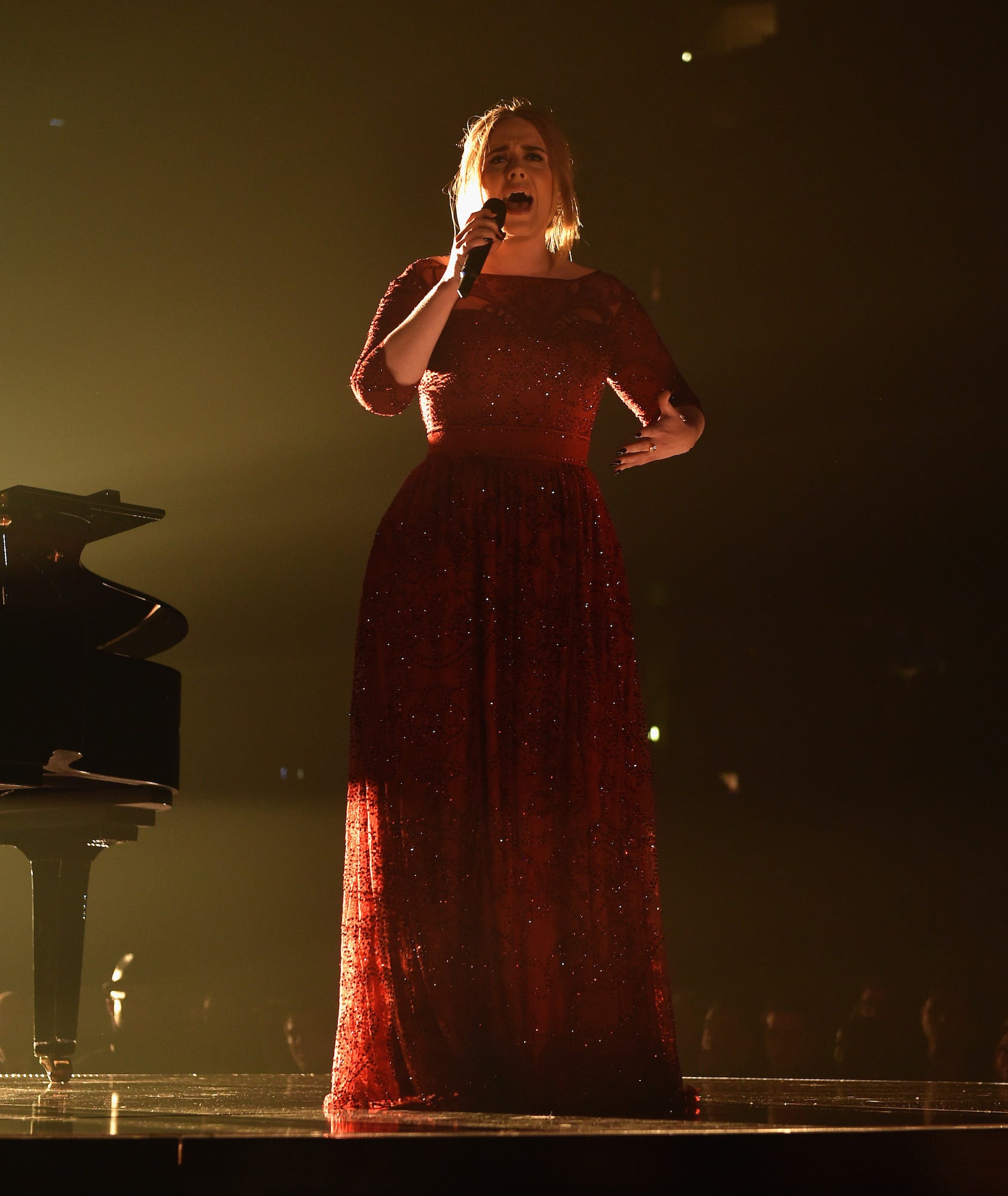 Larry Busacca/Getty Images for NARASAdele’s performance of ‘All I Ask’ had some technical difficulties, but she looked great.

To perform “All I Ask,” the singer changed up her all-black style once again with an A-line gown.

Adele showed up at the 2016 Brit Awards in a custom-made crimson Giambattista Valli gown. 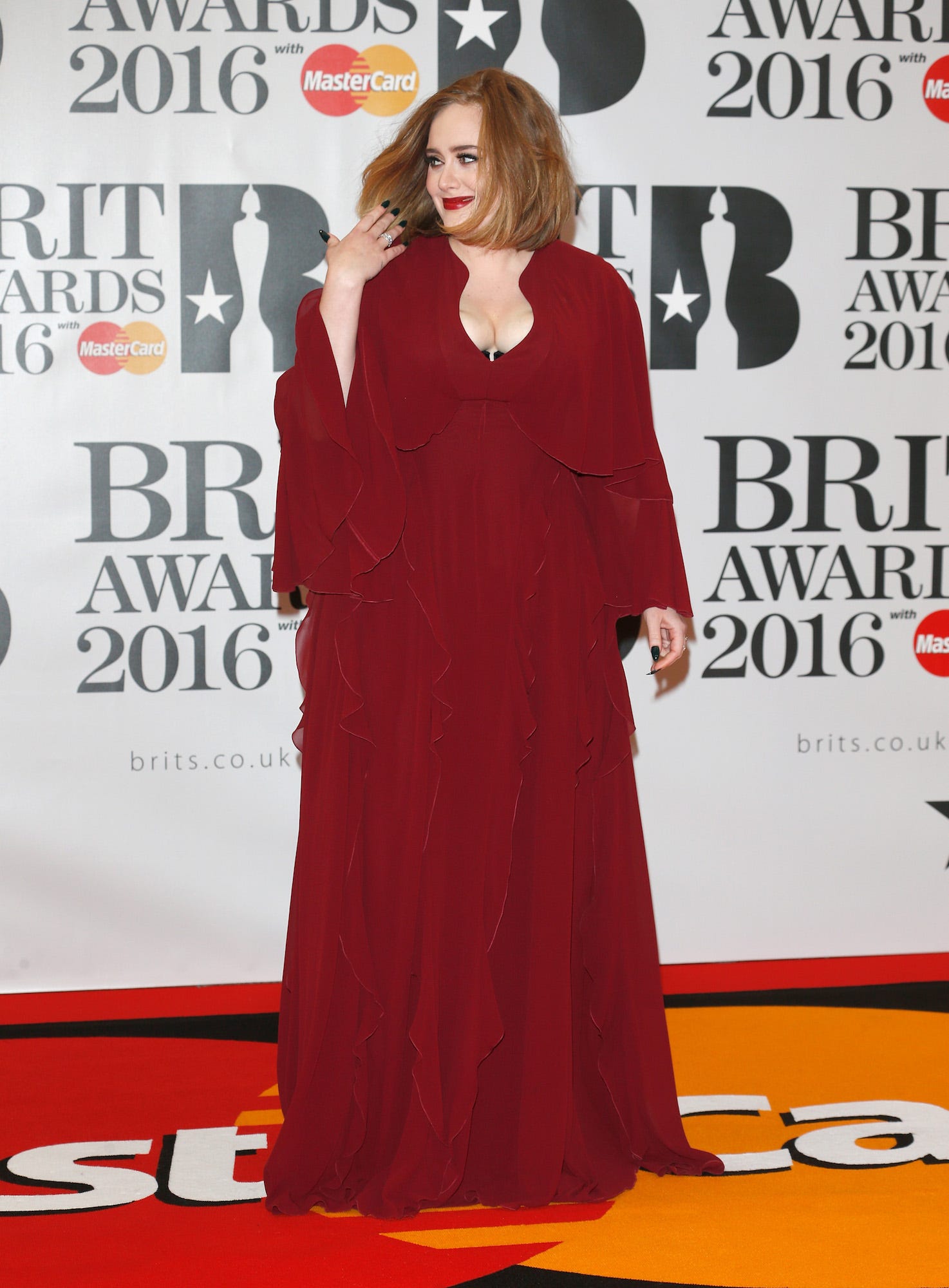 Adele rocked another red look in 2016 with a bold neckline, ruffles, and flowy sleeves. She added a coordinating oxblood lip, a sparkly eye, and dark nails.

At the 2017 Grammys, she stepped out in a green gown by Givenchy.

Adele took home a Grammy for best album of the year, and she continued to play with colour and necklines on the red carpet.

During the Grammys that year, Adele also performed twice. Kevin Winter/Getty Images for NARASAdele performed ‘Hello’ at the Grammys in 2017.

For her performance of “Hello” at the Grammys, she wore a stunning embellished Givenchy dress that took 1,500 hours and seven artisans to make by hand, according to Vogue.

That night, Adele also performed during an emotional tribute to the late musician George Michael. Kevin Winter/Getty Images for NARASAdele wore a cape for her performance during the George Michael tribute.

While singing “Fastlove,” Adele wore her hair in a loose updo to show off the fringed cape feature of her classic black dress.

Adele had some beautiful fashion moments during her 2017 tour, including a glittery maroon gown at a stop in Melbourne. 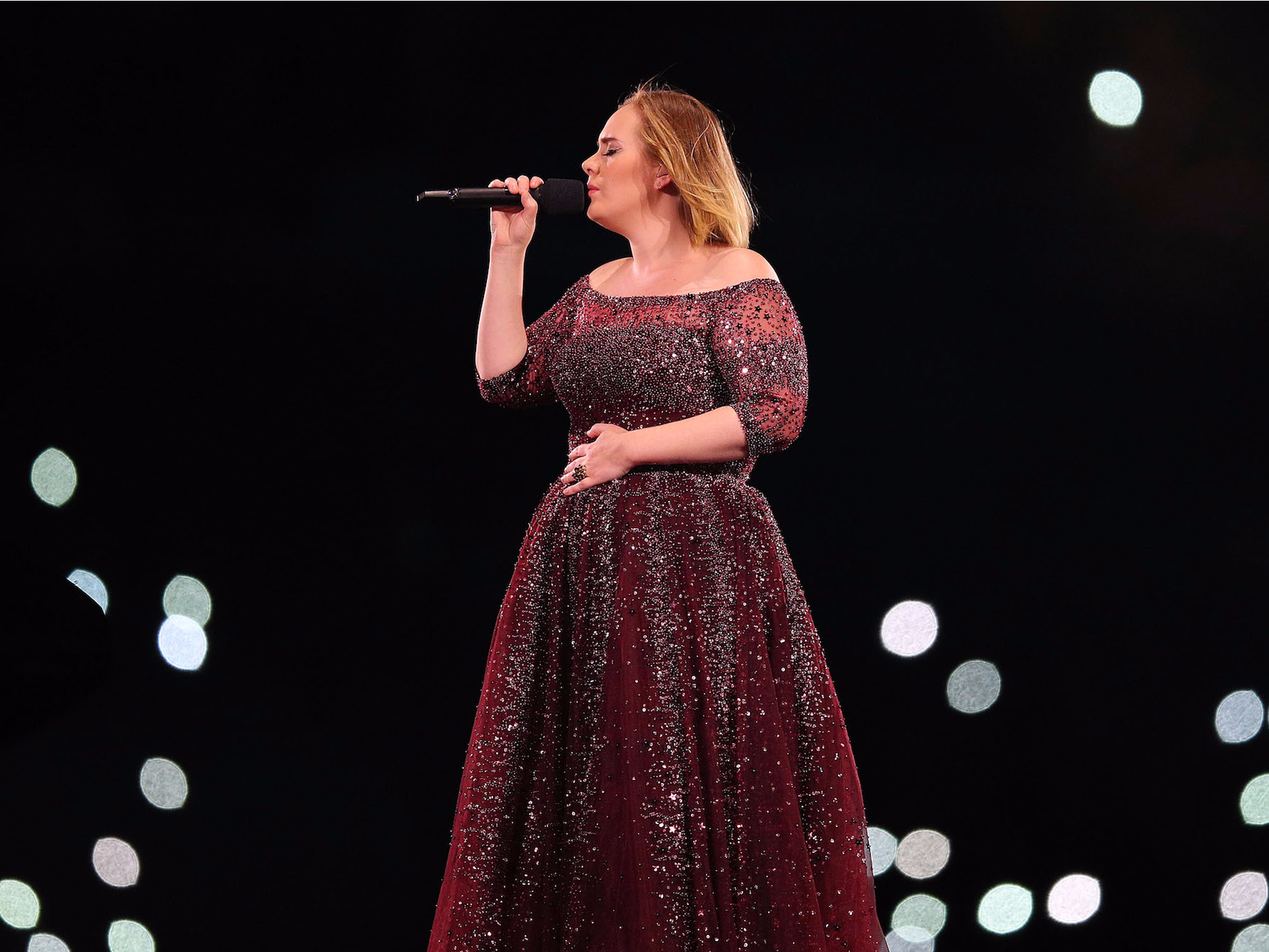 The striking bedazzled red dress was styled with minimal accessories and a windblown bob.